Learning useful representations without supervision remains a key challenge in machine learning. In this paper, we propose a simple yet powerful generative model that learns such discrete representations. Our model, the Vector Quantised-Variational AutoEncoder (VQ-VAE), differs from VAEs in two key ways: the encoder network outputs discrete, rather than continuous, codes; and the prior is learnt rather than static. In order to learn a discrete latent representation, we incorporate ideas from vector quantisation (VQ). Using the VQ method allows the model to circumvent issues of "posterior collapse" -- where the latents are ignored when they are paired with a powerful autoregressive decoder -- typically observed in the VAE framework. Pairing these representations with an autoregressive prior, the model can generate high quality images, videos, and speech as well as doing high quality speaker conversion and unsupervised learning of phonemes, providing further evidence of the utility of the learnt representations. 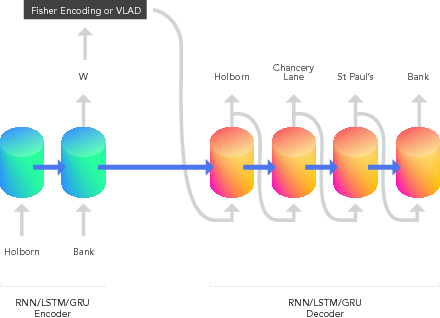 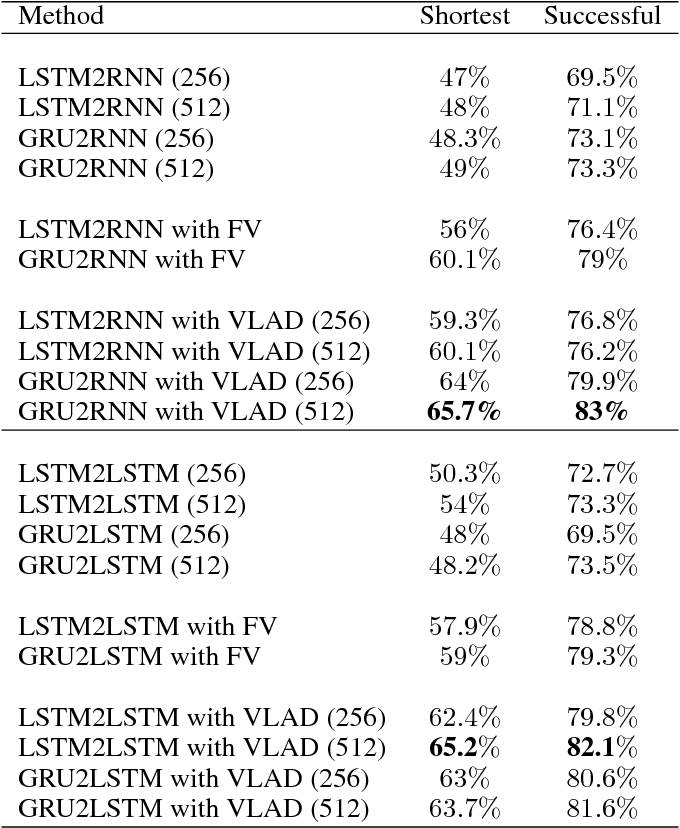 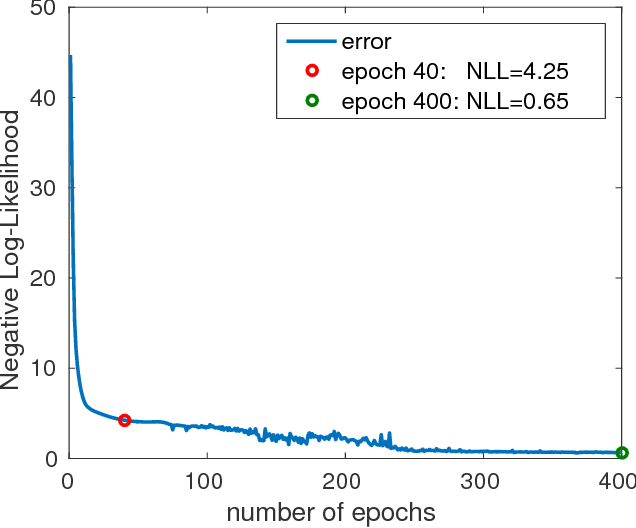 The Fisher information metric is an important foundation of information geometry, wherein it allows us to approximate the local geometry of a probability distribution. Recurrent neural networks such as the Sequence-to-Sequence (Seq2Seq) networks that have lately been used to yield state-of-the-art performance on speech translation or image captioning have so far ignored the geometry of the latent embedding, that they iteratively learn. We propose the information geometric Seq2Seq (GeoSeq2Seq) network which abridges the gap between deep recurrent neural networks and information geometry. Specifically, the latent embedding offered by a recurrent network is encoded as a Fisher kernel of a parametric Gaussian Mixture Model, a formalism common in computer vision. We utilise such a network to predict the shortest routes between two nodes of a graph by learning the adjacency matrix using the GeoSeq2Seq formalism; our results show that for such a problem the probabilistic representation of the latent embedding supersedes the non-probabilistic embedding by 10-15\%.

We present a novel recurrent neural network (RNN) based model that combines the remembering ability of unitary RNNs with the ability of gated RNNs to effectively forget redundant/irrelevant information in its memory. We achieve this by extending unitary RNNs with a gating mechanism. Our model is able to outperform LSTMs, GRUs and Unitary RNNs on several long-term dependency benchmark tasks. We empirically both show the orthogonal/unitary RNNs lack the ability to forget and also the ability of GORU to simultaneously remember long term dependencies while forgetting irrelevant information. This plays an important role in recurrent neural networks. We provide competitive results along with an analysis of our model on many natural sequential tasks including the bAbI Question Answering, TIMIT speech spectrum prediction, Penn TreeBank, and synthetic tasks that involve long-term dependencies such as algorithmic, parenthesis, denoising and copying tasks. 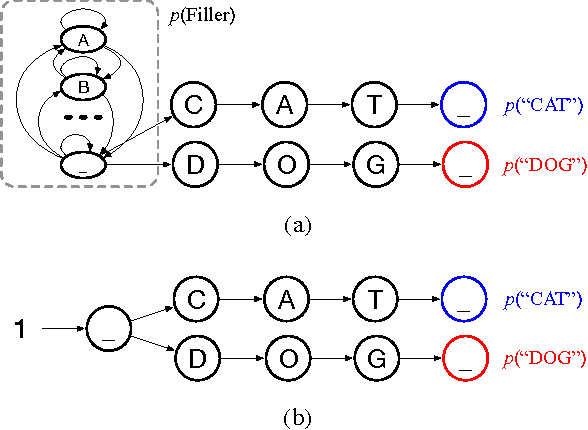 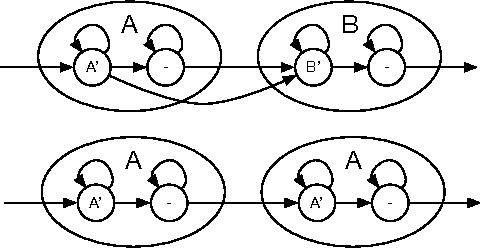 In this paper, we propose a context-aware keyword spotting model employing a character-level recurrent neural network (RNN) for spoken term detection in continuous speech. The RNN is end-to-end trained with connectionist temporal classification (CTC) to generate the probabilities of character and word-boundary labels. There is no need for the phonetic transcription, senone modeling, or system dictionary in training and testing. Also, keywords can easily be added and modified by editing the text based keyword list without retraining the RNN. Moreover, the unidirectional RNN processes an infinitely long input audio streams without pre-segmentation and keywords are detected with low-latency before the utterance is finished. Experimental results show that the proposed keyword spotter significantly outperforms the deep neural network (DNN) and hidden Markov model (HMM) based keyword-filler model even with less computations.

A Computational Algorithm based on Empirical Analysis, that Composes Sanskrit Poetry 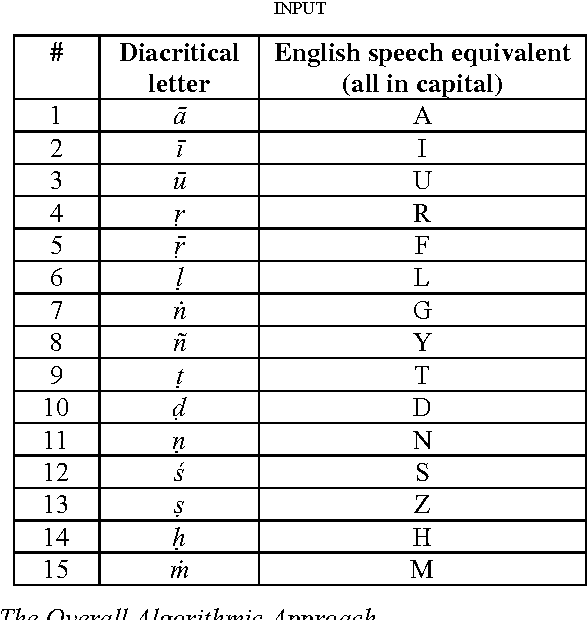 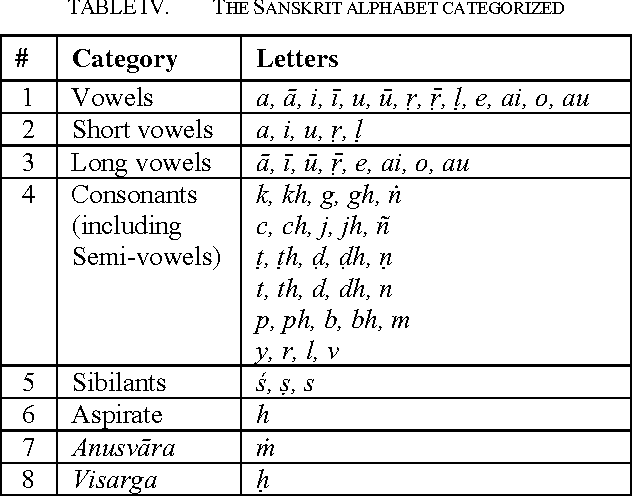 Poetry-writing in Sanskrit is riddled with problems for even those who know the language well. This is so because the rules that govern Sanskrit prosody are numerous and stringent. We propose a computational algorithm that converts prose given as E-text into poetry in accordance with the metrical rules of Sanskrit prosody, simultaneously taking care to ensure that sandhi or euphonic conjunction, which is compulsory in verse, is handled. The algorithm is considerably speeded up by a novel method of reducing the target search database. The algorithm further gives suggestions to the poet in case what he/she has given as the input prose is impossible to fit into any allowed metrical format. There is also an interactive component of the algorithm by which the algorithm interacts with the poet to resolve ambiguities. In addition, this unique work, which provides a solution to a problem that has never been addressed before, provides a simple yet effective speech recognition interface that would help the visually impaired dictate words in E-text, which is in turn versified by our Poetry Composer Engine. 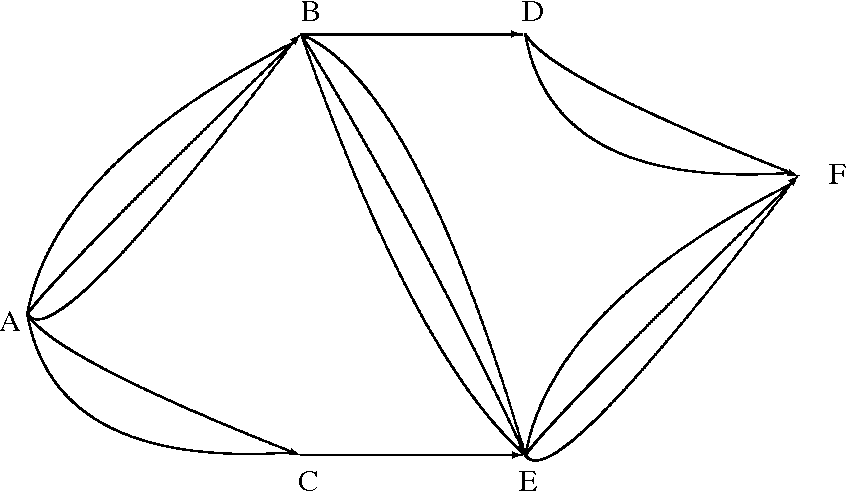 This thesis presents a broad-coverage probabilistic top-down parser, and its application to the problem of language modeling for speech recognition. The parser builds fully connected derivations incrementally, in a single pass from left-to-right across the string. We argue that the parsing approach that we have adopted is well-motivated from a psycholinguistic perspective, as a model that captures probabilistic dependencies between lexical items, as part of the process of building connected syntactic structures. The basic parser and conditional probability models are presented, and empirical results are provided for its parsing accuracy on both newspaper text and spontaneous telephone conversations. Modifications to the probability model are presented that lead to improved performance. A new language model which uses the output of the parser is then defined. Perplexity and word error rate reduction are demonstrated over trigram models, even when the trigram is trained on significantly more data. Interpolation on a word-by-word basis with a trigram model yields additional improvements. 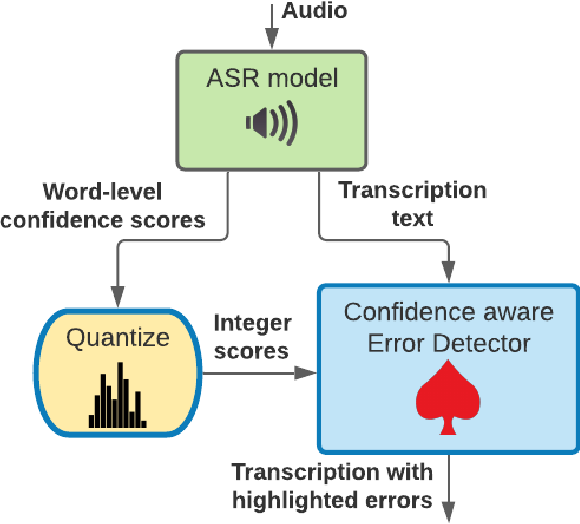 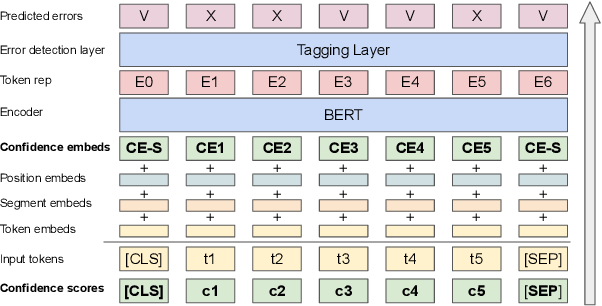 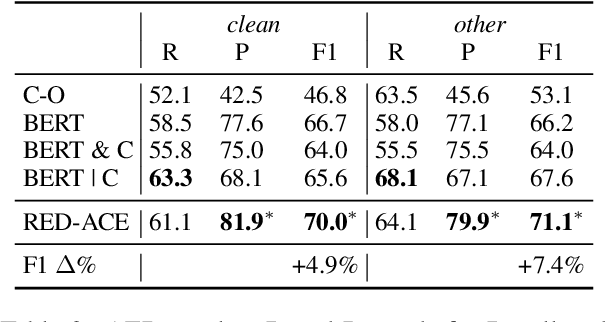 ASR Error Detection (AED) models aim to post-process the output of Automatic Speech Recognition (ASR) systems, in order to detect transcription errors. Modern approaches usually use text-based input, comprised solely of the ASR transcription hypothesis, disregarding additional signals from the ASR model. Instead, we propose to utilize the ASR system's word-level confidence scores for improving AED performance. Specifically, we add an ASR Confidence Embedding (ACE) layer to the AED model's encoder, allowing us to jointly encode the confidence scores and the transcribed text into a contextualized representation. Our experiments show the benefits of ASR confidence scores for AED, their complementary effect over the textual signal, as well as the effectiveness and robustness of ACE for combining these signals. To foster further research, we publish a novel AED dataset consisting of ASR outputs on the LibriSpeech corpus with annotated transcription errors.

YourTTS: Towards Zero-Shot Multi-Speaker TTS and Zero-Shot Voice Conversion for everyone 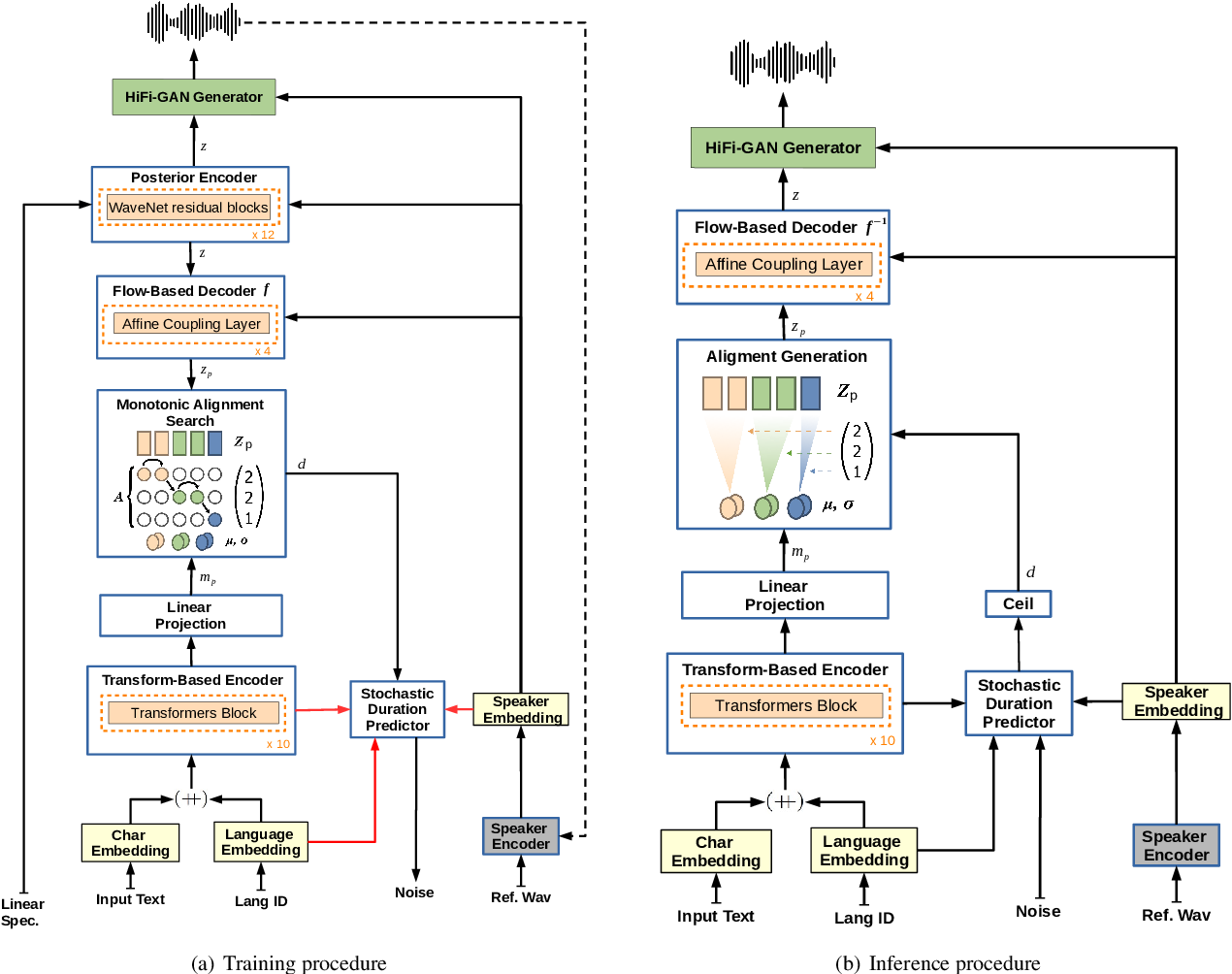 Identity Conversion for Emotional Speakers: A Study for Disentanglement of Emotion Style and Speaker Identity

Voice conversion is a common speech synthesis task which can be solved in different ways depending on a particular real-world scenario. The most challenging one often referred to as one-shot many-to-many voice conversion consists in copying the target voice from only one reference utterance in the most general case when both source and target speakers do not belong to the training dataset. We present a scalable high-quality solution based on diffusion probabilistic modeling and demonstrate its superior quality compared to state-of-the-art one-shot voice conversion approaches. Moreover, focusing on real-time applications, we investigate general principles which can make diffusion models faster while keeping synthesis quality at a high level. As a result, we develop a novel Stochastic Differential Equations solver suitable for various diffusion model types and generative tasks as shown through empirical studies and justify it by theoretical analysis.