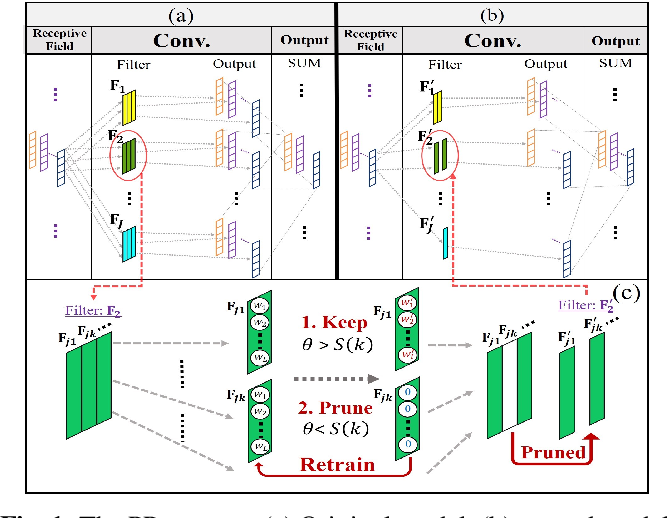 Most recent studies on deep learning based speech enhancement (SE) focused on improving denoising performance. However, successful SE applications require striking a desirable balance between denoising performance and computational cost in real scenarios. In this study, we propose a novel parameter pruning (PP) technique, which removes redundant channels in a neural network. In addition, a parameter quantization (PQ) technique was applied to reduce the size of a neural network by representing weights with fewer cluster centroids. Because the techniques are derived based on different concepts, the PP and PQ can be integrated to provide even more compact SE models. The experimental results show that the PP and PQ techniques produce a compacted SE model with a size of only 10.03% compared to that of the original model, resulting in minor performance losses of 1.43% (from 0.70 to 0.69) for STOI and 3.24% (from 1.85 to 1.79) for PESQ. The promising results suggest that the PP and PQ techniques can be used in a SE system in devices with limited storage and computation resources. 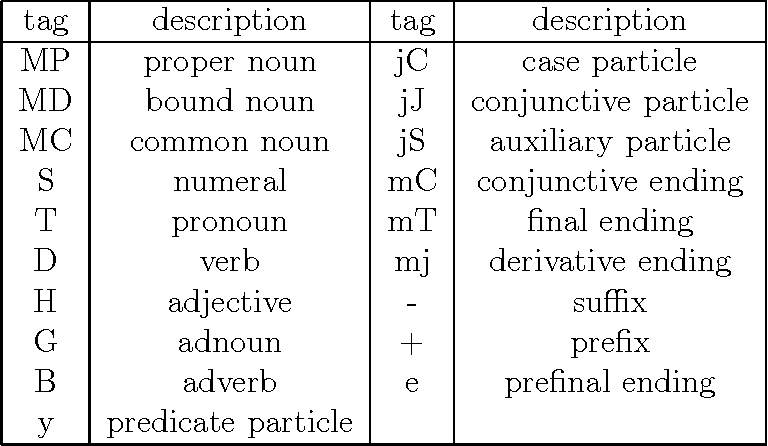 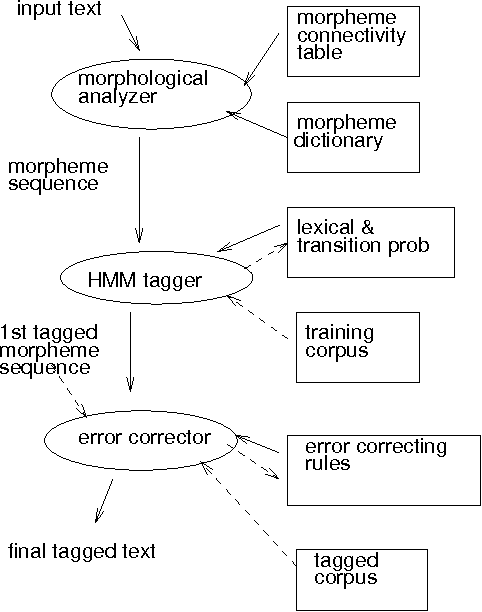 Both statistical and rule-based approaches to part-of-speech (POS) disambiguation have their own advantages and limitations. Especially for Korean, the narrow windows provided by hidden markov model (HMM) cannot cover the necessary lexical and long-distance dependencies for POS disambiguation. On the other hand, the rule-based approaches are not accurate and flexible to new tag-sets and languages. In this regard, the statistical/rule-based hybrid method that can take advantages of both approaches is called for the robust and flexible POS disambiguation. We present one of such method, that is, a two-phase learning architecture for the hybrid statistical/rule-based POS disambiguation, especially for Korean. In this method, the statistical learning of morphological tagging is error-corrected by the rule-based learning of Brill [1992] style tagger. We also design the hierarchical and flexible Korean tag-set to cope with the multiple tagging applications, each of which requires different tag-set. Our experiments show that the two-phase learning method can overcome the undesirable features of solely HMM-based or solely rule-based tagging, especially for morphologically complex Korean. 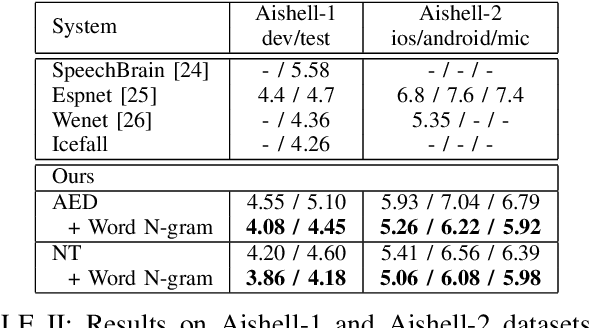 Despite the rapid progress of end-to-end (E2E) automatic speech recognition (ASR), it has been shown that incorporating external language models (LMs) into the decoding can further improve the recognition performance of E2E ASR systems. To align with the modeling units adopted in E2E ASR systems, subword-level (e.g., characters, BPE) LMs are usually used to cooperate with current E2E ASR systems. However, the use of subword-level LMs will ignore the word-level information, which may limit the strength of the external LMs in E2E ASR. Although several methods have been proposed to incorporate word-level external LMs in E2E ASR, these methods are mainly designed for languages with clear word boundaries such as English and cannot be directly applied to languages like Mandarin, in which each character sequence can have multiple corresponding word sequences. To this end, we propose a novel decoding algorithm where a word-level lattice is constructed on-the-fly to consider all possible word sequences for each partial hypothesis. Then, the LM score of the hypothesis is obtained by intersecting the generated lattice with an external word N-gram LM. The proposed method is examined on both Attention-based Encoder-Decoder (AED) and Neural Transducer (NT) frameworks. Experiments suggest that our method consistently outperforms subword-level LMs, including N-gram LM and neural network LM. We achieve state-of-the-art results on both Aishell-1 (CER 4.18%) and Aishell-2 (CER 5.06%) datasets and reduce CER by 14.8% relatively on a 21K-hour Mandarin dataset. 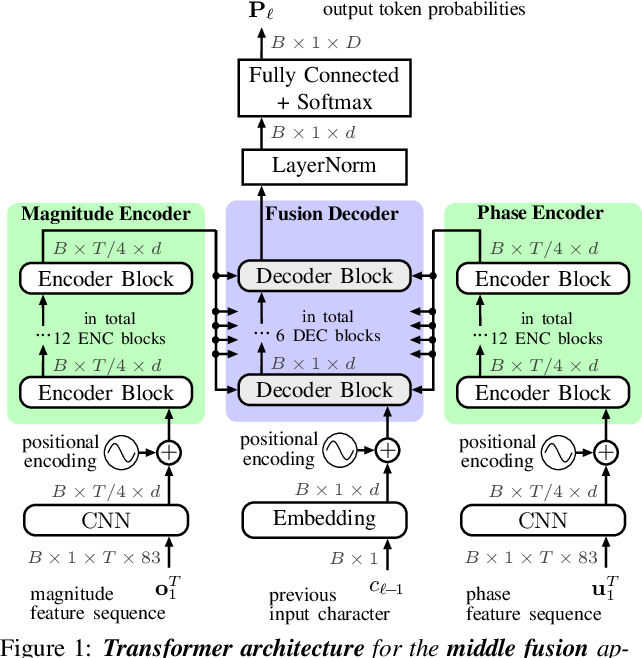 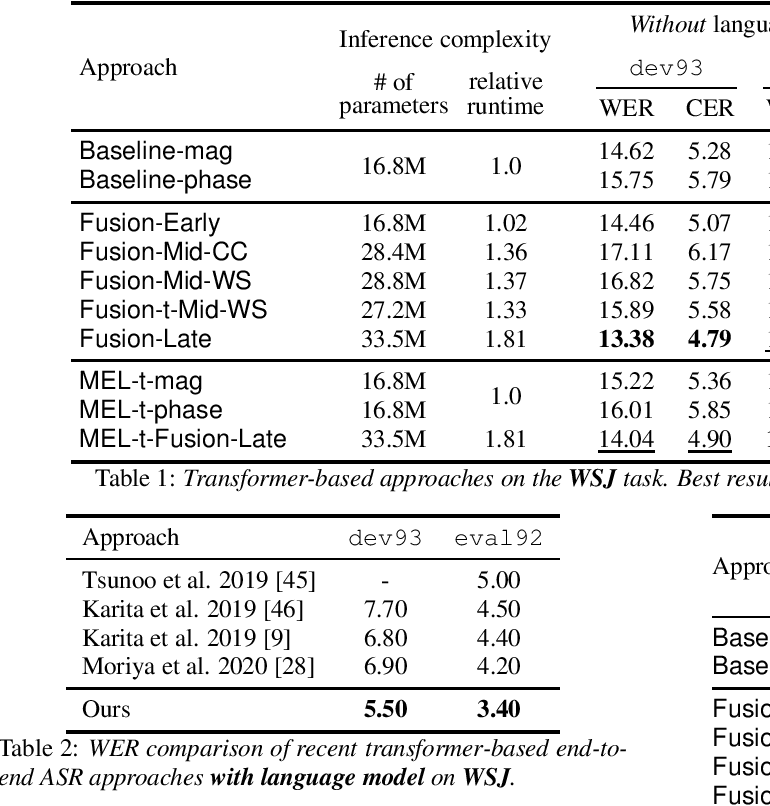 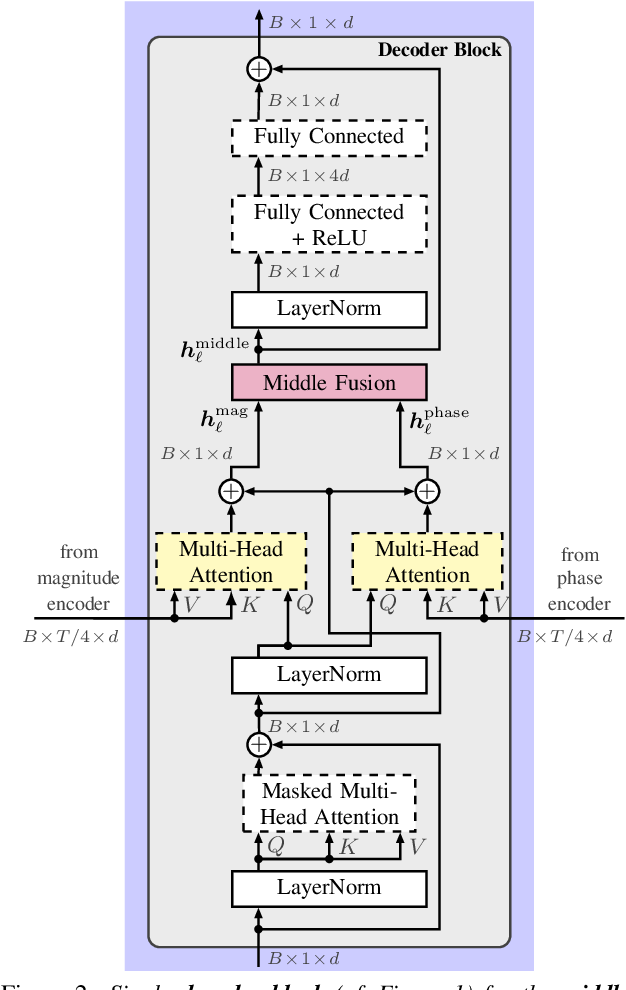 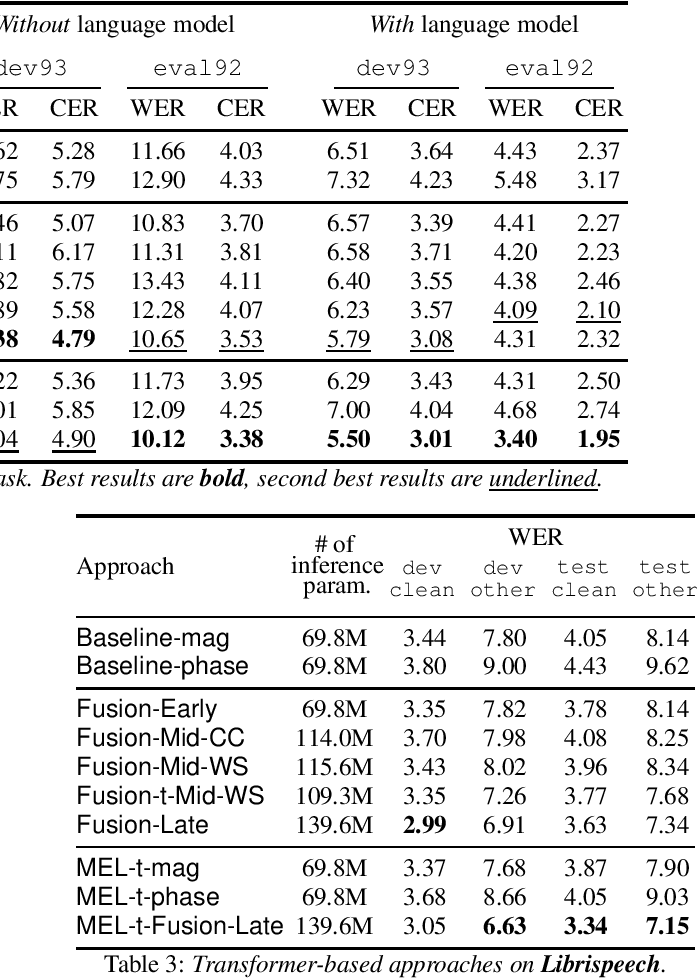 Stream fusion, also known as system combination, is a common technique in automatic speech recognition for traditional hybrid hidden Markov model approaches, yet mostly unexplored for modern deep neural network end-to-end model architectures. Here, we investigate various fusion techniques for the all-attention-based encoder-decoder architecture known as the transformer, striving to achieve optimal fusion by investigating different fusion levels in an example single-microphone setting with fusion of standard magnitude and phase features. We introduce a novel multi-encoder learning method that performs a weighted combination of two encoder-decoder multi-head attention outputs only during training. Employing then only the magnitude feature encoder in inference, we are able to show consistent improvement on Wall Street Journal (WSJ) with language model and on Librispeech, without increase in runtime or parameters. Combining two such multi-encoder trained models by a simple late fusion in inference, we achieve state-of-the-art performance for transformer-based models on WSJ with a significant WER reduction of 19\% relative compared to the current benchmark approach. 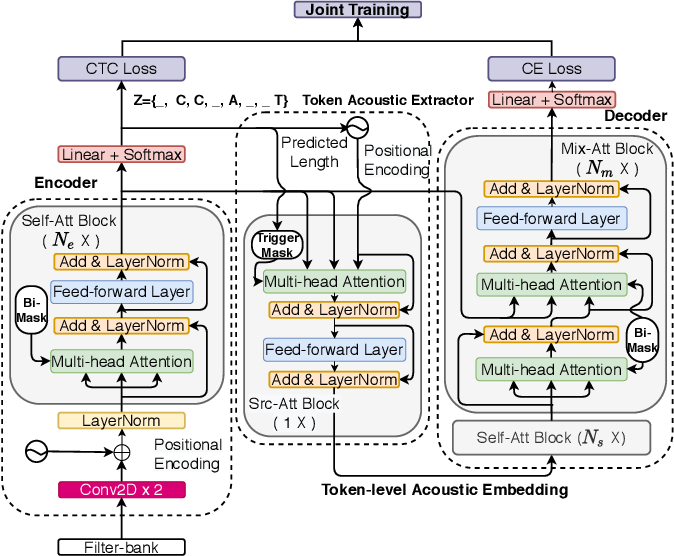 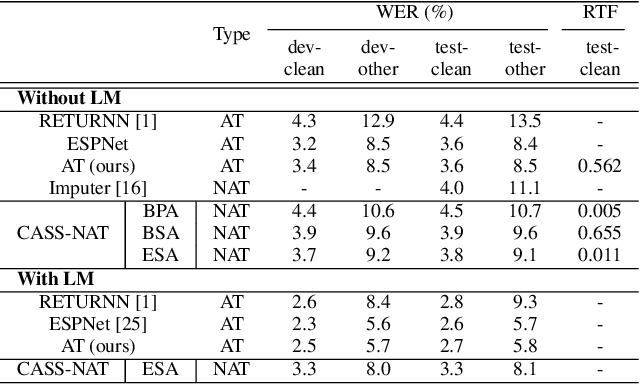 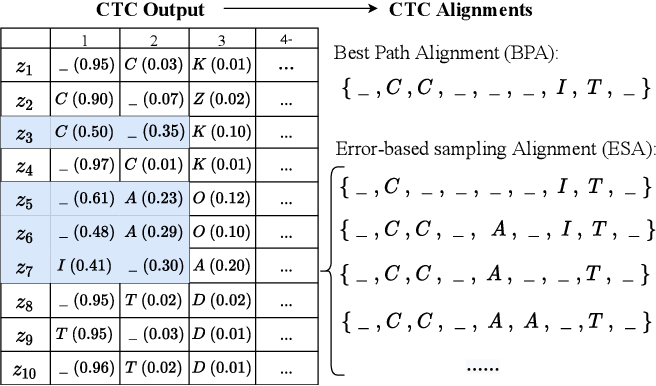 We propose a CTC alignment-based single step non-autoregressive transformer (CASS-NAT) for speech recognition. Specifically, the CTC alignment contains the information of (a) the number of tokens for decoder input, and (b) the time span of acoustics for each token. The information are used to extract acoustic representation for each token in parallel, referred to as token-level acoustic embedding which substitutes the word embedding in autoregressive transformer (AT) to achieve parallel generation in decoder. During inference, an error-based alignment sampling method is proposed to be applied to the CTC output space, reducing the WER and retaining the parallelism as well. Experimental results show that the proposed method achieves WERs of 3.8%/9.1% on Librispeech test clean/other dataset without an external LM, and a CER of 5.8% on Aishell1 Mandarin corpus, respectively1. Compared to the AT baseline, the CASS-NAT has a performance reduction on WER, but is 51.2x faster in terms of RTF. When decoding with an oracle CTC alignment, the lower bound of WER without LM reaches 2.3% on the test-clean set, indicating the potential of the proposed method. 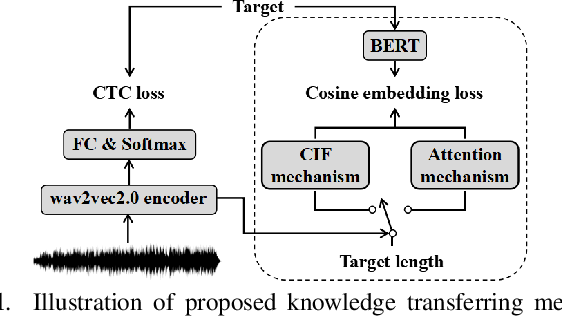 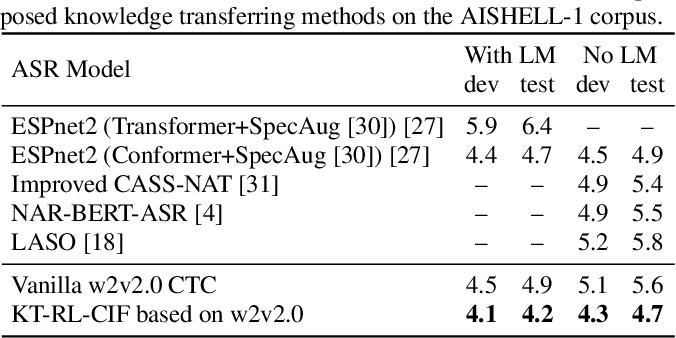 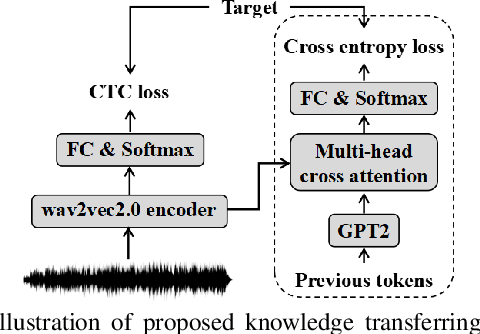 Recently, end-to-end automatic speech recognition models based on connectionist temporal classification (CTC) have achieved impressive results, especially when fine-tuned from wav2vec2.0 models. Due to the conditional independence assumption, CTC-based models are always weaker than attention-based encoder-decoder models and require the assistance of external language models (LMs). To solve this issue, we propose two knowledge transferring methods that leverage pre-trained LMs, such as BERT and GPT2, to improve CTC-based models. The first method is based on representation learning, in which the CTC-based models use the representation produced by BERT as an auxiliary learning target. The second method is based on joint classification learning, which combines GPT2 for text modeling with a hybrid CTC/attention architecture. Experiment on AISHELL-1 corpus yields a character error rate (CER) of 4.2% on the test set. When compared to the vanilla CTC-based models fine-tuned from the wav2vec2.0 models, our knowledge transferring method reduces CER by 16.1% relatively without external LMs. 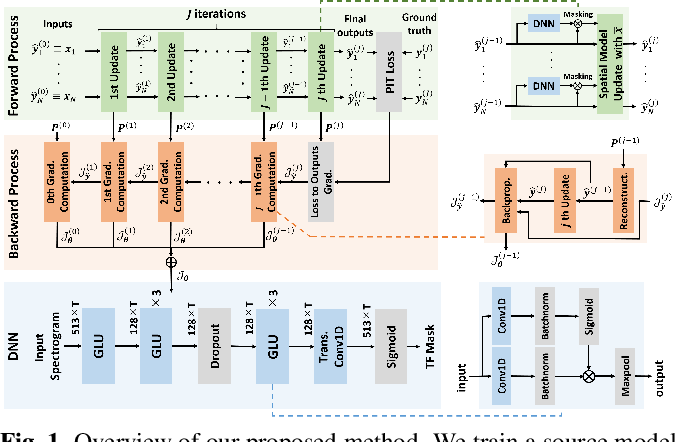 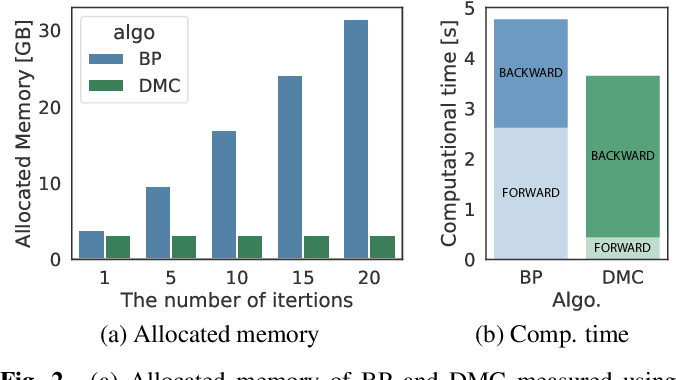 We propose an end-to-end framework for training iterative multi-channel joint dereverberation and source separation with a neural source model. We combine the unified dereverberation and separation update equations of ILRMA-T with a deep neural network (DNN) serving as source model. The weights of the model are directly trained by gradient descent with a permutation invariant loss on the output time-domain signals. One drawback of this approach is that backpropagation consumes memory linearly in the number of iterations. This severely limits the number of iterations, channels, or signal lengths that can be used during training. We introduce demixing matrix checkpointing to bypass this problem, a new technique that reduces the total memory cost to that of a single iteration. In experiments, we demonstrate that the introduced framework results in high-performance in terms of conventional speech quality metrics and word error rate. Furthermore, it generalizes to number of channels unseen during training. 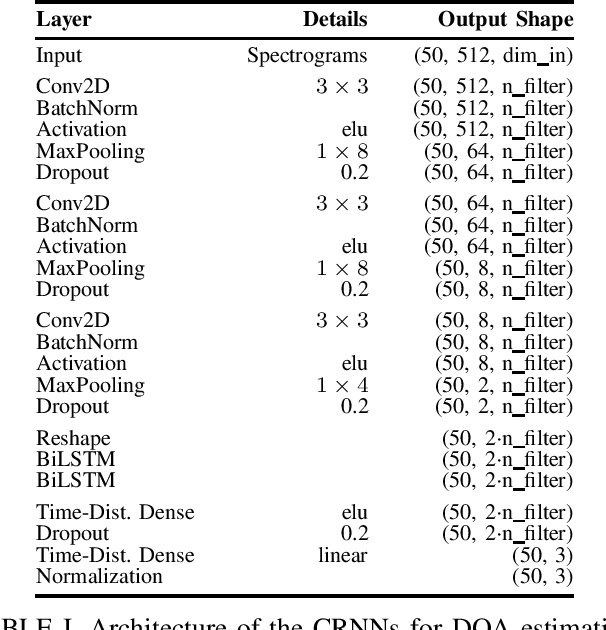 Training convolutional recurrent neural networks (CRNNs) on first-order Ambisonics signals is a well-known approach for estimating the direction of speech/sound arrival. In this work, we investigate whether increasing the order of Ambisonics signals up to the fourth order further improves the estimation performance of CRNNs. While our results on data based on simulated spatial room impulse responses (SRIRs) show that the use of higher Ambisonics orders does have the potential to provide better localization results, no further improvement was shown on data based on real SRIRs from order two onwards. Rather, it seems to be crucial to extract meaningful features from the raw data. First order features derived from the acoustic intensity vector were superior to pure higher-order magnitude and phase features in almost all scenarios. 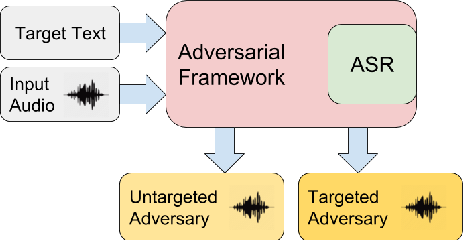 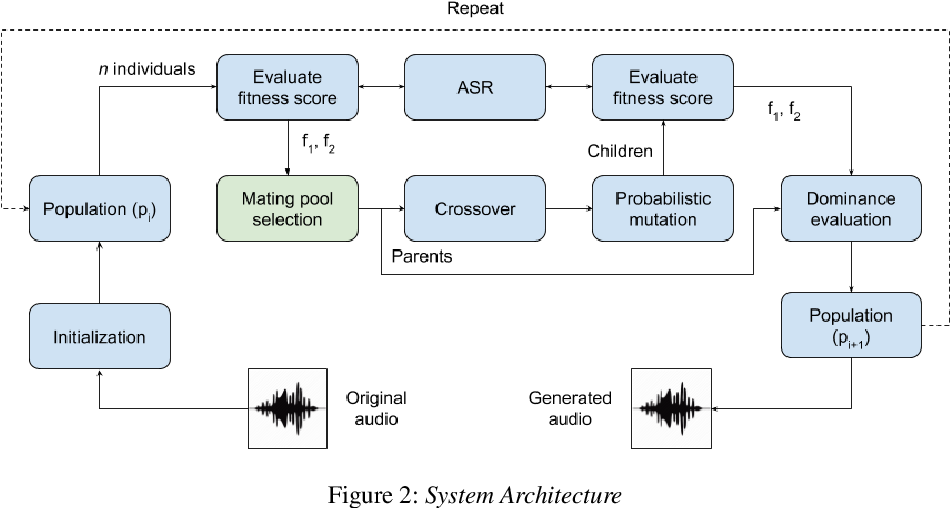 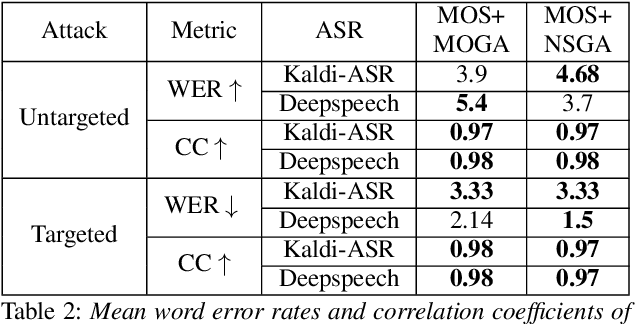 Fooling deep neural networks with adversarial input have exposed a significant vulnerability in current state-of-the-art systems in multiple domains. Both black-box and white-box approaches have been used to either replicate the model itself or to craft examples which cause the model to fail. In this work, we use a multi-objective genetic algorithm based approach to perform both targeted and un-targeted black-box attacks on automatic speech recognition (ASR) systems. The main contribution of this research is the proposal of a generic framework which can be used to attack any ASR system, even if it's internal working is hidden. During the un-targeted attacks, the Word Error Rates (WER) of the ASR degrades from 0.5 to 5.4, indicating the potency of our approach. In targeted attacks, our solution reaches a WER of 2.14. In both attacks, the adversarial samples maintain a high acoustic similarity of 0.98 and 0.97.