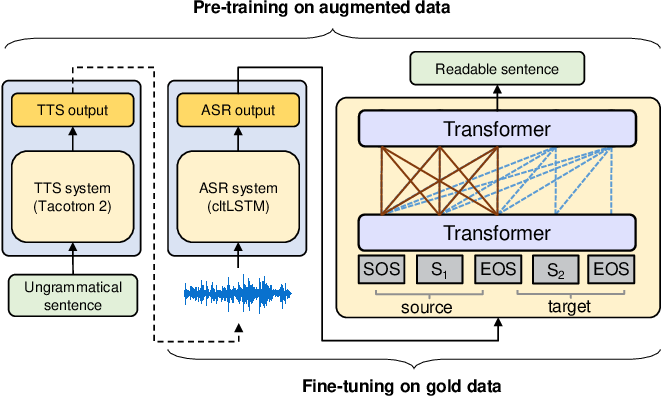 Modern Automatic Speech Recognition (ASR) systems can achieve high performance in terms of recognition accuracy. However, a perfectly accurate transcript still can be challenging to read due to disfluency, filter words, and other errata common in spoken communication. Many downstream tasks and human readers rely on the output of the ASR system; therefore, errors introduced by the speaker and ASR system alike will be propagated to the next task in the pipeline. In this work, we propose an ASR post-processing model that aims to transform the incorrect and noisy ASR output into a readable text for humans and downstream tasks. We leverage the Metadata Extraction (MDE) corpus to construct a task-specific dataset for our study. Since the dataset is small, we propose a novel data augmentation method and use a two-stage training strategy to fine-tune the RoBERTa pre-trained model. On the constructed test set, our model outperforms a production two-step pipeline-based post-processing method by a large margin of 13.26 on readability-aware WER (RA-WER) and 17.53 on BLEU metrics. Human evaluation also demonstrates that our method can generate more human-readable transcripts than the baseline method. 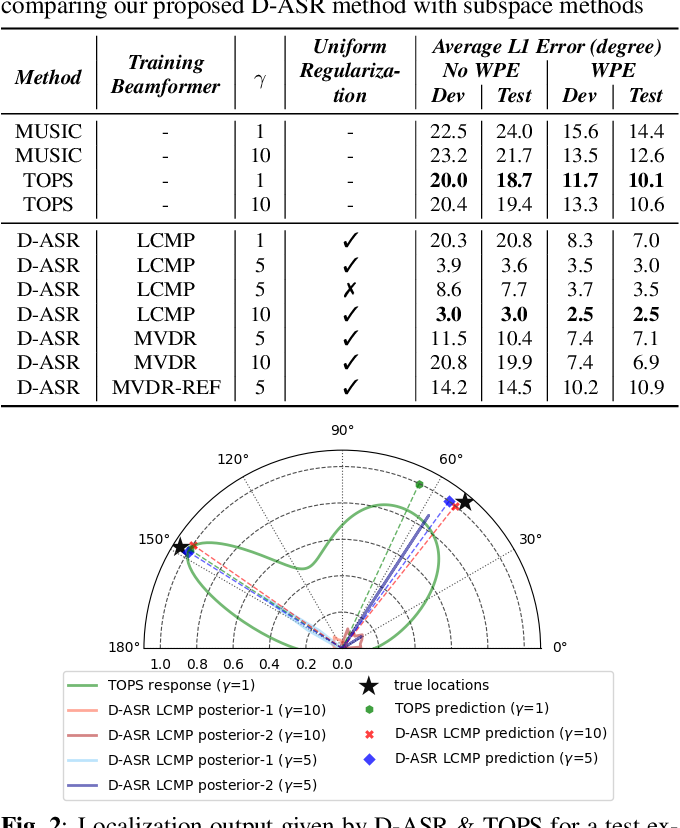 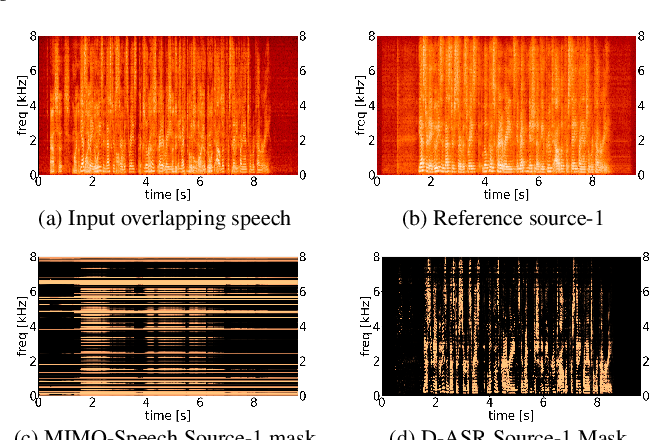 This paper proposes a new paradigm for handling far-field multi-speaker data in an end-to-end neural network manner, called directional automatic speech recognition (D-ASR), which explicitly models source speaker locations. In D-ASR, the azimuth angle of the sources with respect to the microphone array is defined as a latent variable. This angle controls the quality of separation, which in turn determines the ASR performance. All three functionalities of D-ASR: localization, separation, and recognition are connected as a single differentiable neural network and trained solely based on ASR error minimization objectives. The advantages of D-ASR over existing methods are threefold: (1) it provides explicit speaker locations, (2) it improves the explainability factor, and (3) it achieves better ASR performance as the process is more streamlined. In addition, D-ASR does not require explicit direction of arrival (DOA) supervision like existing data-driven localization models, which makes it more appropriate for realistic data. For the case of two source mixtures, D-ASR achieves an average DOA prediction error of less than three degrees. It also outperforms a strong far-field multi-speaker end-to-end system in both separation quality and ASR performance. 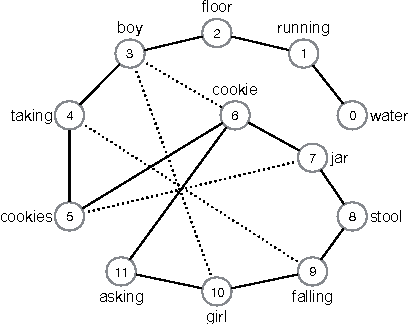 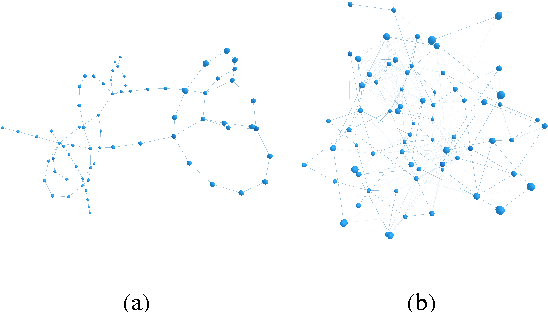 Mild Cognitive Impairment (MCI) is a mental disorder difficult to diagnose. Linguistic features, mainly from parsers, have been used to detect MCI, but this is not suitable for large-scale assessments. MCI disfluencies produce non-grammatical speech that requires manual or high precision automatic correction of transcripts. In this paper, we modeled transcripts into complex networks and enriched them with word embedding (CNE) to better represent short texts produced in neuropsychological assessments. The network measurements were applied with well-known classifiers to automatically identify MCI in transcripts, in a binary classification task. A comparison was made with the performance of traditional approaches using Bag of Words (BoW) and linguistic features for three datasets: DementiaBank in English, and Cinderella and Arizona-Battery in Portuguese. Overall, CNE provided higher accuracy than using only complex networks, while Support Vector Machine was superior to other classifiers. CNE provided the highest accuracies for DementiaBank and Cinderella, but BoW was more efficient for the Arizona-Battery dataset probably owing to its short narratives. The approach using linguistic features yielded higher accuracy if the transcriptions of the Cinderella dataset were manually revised. Taken together, the results indicate that complex networks enriched with embedding is promising for detecting MCI in large-scale assessments


* Published in Annual Meeting of the Association for Computational Linguist 2017 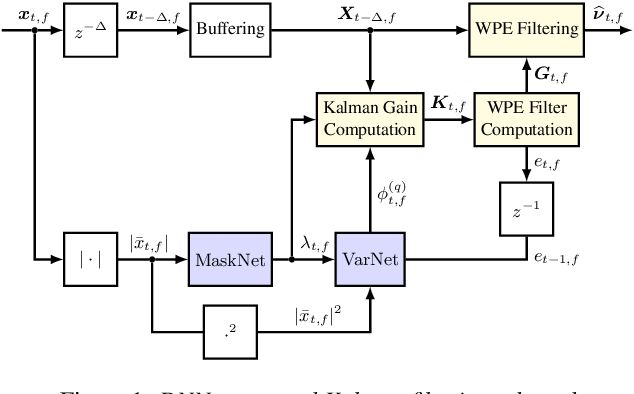 In this paper, a neural network-augmented algorithm for noise-robust online dereverberation with a Kalman filtering variant of the weighted prediction error (WPE) method is proposed. The filter stochastic variations are predicted by a deep neural network (DNN) trained end-to-end using the filter residual error and signal characteristics. The presented framework allows for robust dereverberation on a single-channel noisy reverberant dataset similar to WHAMR!. The Kalman filtering WPE introduces distortions in the enhanced signal when predicting the filter variations from the residual error only, if the target speech power spectral density is not perfectly known and the observation is noisy. The proposed approach avoids these distortions by correcting the filter variations estimation in a data-driven way, increasing the robustness of the method to noisy scenarios. Furthermore, it yields a strong dereverberation and denoising performance compared to a DNN-supported recursive least squares variant of WPE, especially for highly noisy inputs. 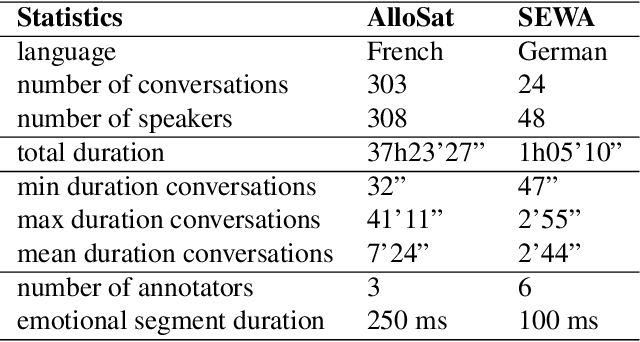 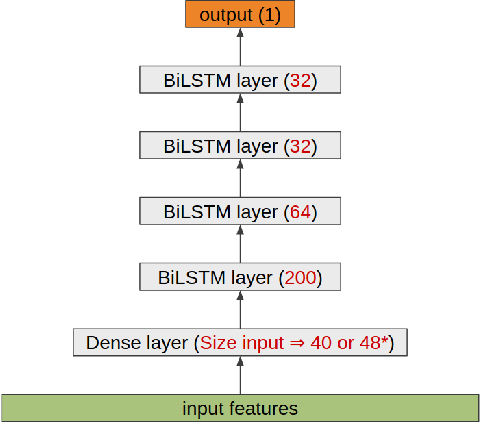 Pre-training for feature extraction is an increasingly studied approach to get better continuous representations of audio and text content. In the present work, we use wav2vec and camemBERT as self-supervised learned models to represent our data in order to perform continuous emotion recognition from speech (SER) on AlloSat, a large French emotional database describing the satisfaction dimension, and on the state of the art corpus SEWA focusing on valence, arousal and liking dimensions. To the authors' knowledge, this paper presents the first study showing that the joint use of wav2vec and BERT-like pre-trained features is very relevant to deal with continuous SER task, usually characterized by a small amount of labeled training data. Evaluated by the well-known concordance correlation coefficient (CCC), our experiments show that we can reach a CCC value of 0.825 instead of 0.592 when using MFCC in conjunction with word2vec word embedding on the AlloSat dataset. 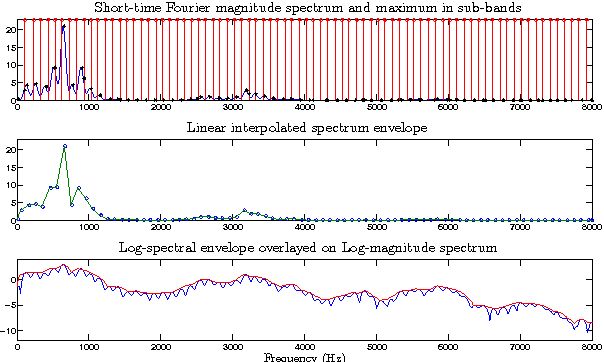 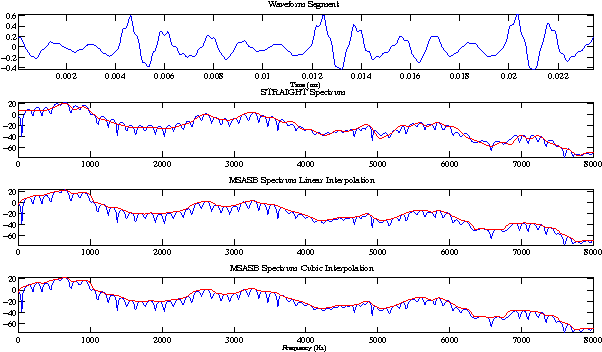 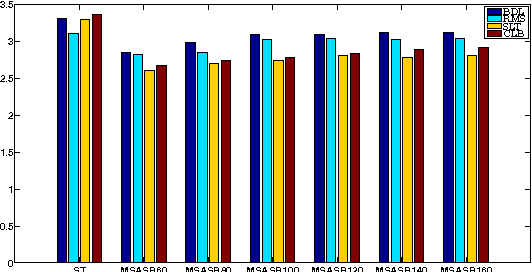 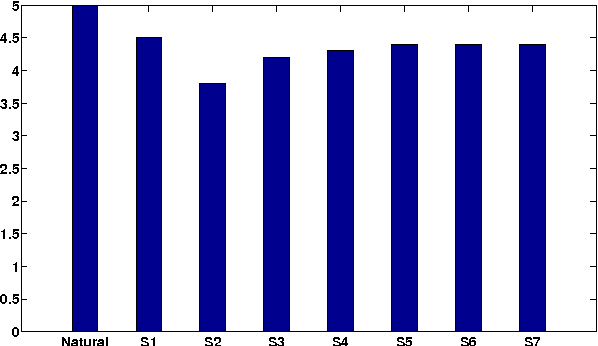 In this paper we propose a technique for spectral envelope estimation using maximum values in the sub-bands of Fourier magnitude spectrum (MSASB). Most other methods in the literature parametrize spectral envelope in cepstral domain such as Mel-generalized cepstrum etc. Such cepstral domain representations, although compact, are not readily interpretable. This difficulty is overcome by our method which parametrizes in the spectral domain itself. In our experiments, spectral envelope estimated using MSASB method was incorporated in the STRAIGHT vocoder. Both objective and subjective results of analysis-by-synthesis indicate that the proposed method is comparable to STRAIGHT. We also evaluate the effectiveness of the proposed parametrization in a statistical parametric speech synthesis framework using deep neural networks.

Automated Speech Scoring System Under The Lens: Evaluating and interpreting the linguistic cues for language proficiency 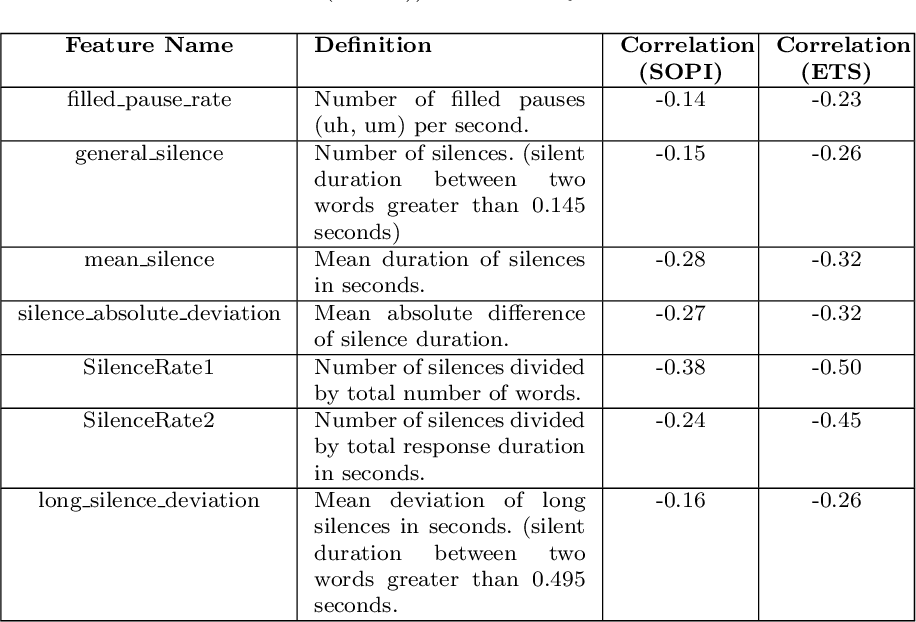 English proficiency assessments have become a necessary metric for filtering and selecting prospective candidates for both academia and industry. With the rise in demand for such assessments, it has become increasingly necessary to have the automated human-interpretable results to prevent inconsistencies and ensure meaningful feedback to the second language learners. Feature-based classical approaches have been more interpretable in understanding what the scoring model learns. Therefore, in this work, we utilize classical machine learning models to formulate a speech scoring task as both a classification and a regression problem, followed by a thorough study to interpret and study the relation between the linguistic cues and the English proficiency level of the speaker. First, we extract linguist features under five categories (fluency, pronunciation, content, grammar and vocabulary, and acoustic) and train models to grade responses. In comparison, we find that the regression-based models perform equivalent to or better than the classification approach. Second, we perform ablation studies to understand the impact of each of the feature and feature categories on the performance of proficiency grading. Further, to understand individual feature contributions, we present the importance of top features on the best performing algorithm for the grading task. Third, we make use of Partial Dependence Plots and Shapley values to explore feature importance and conclude that the best performing trained model learns the underlying rubrics used for grading the dataset used in this study.

Look Who's Talking: Bipartite Networks as Representations of a Topic Model of New Zealand Parliamentary Speeches 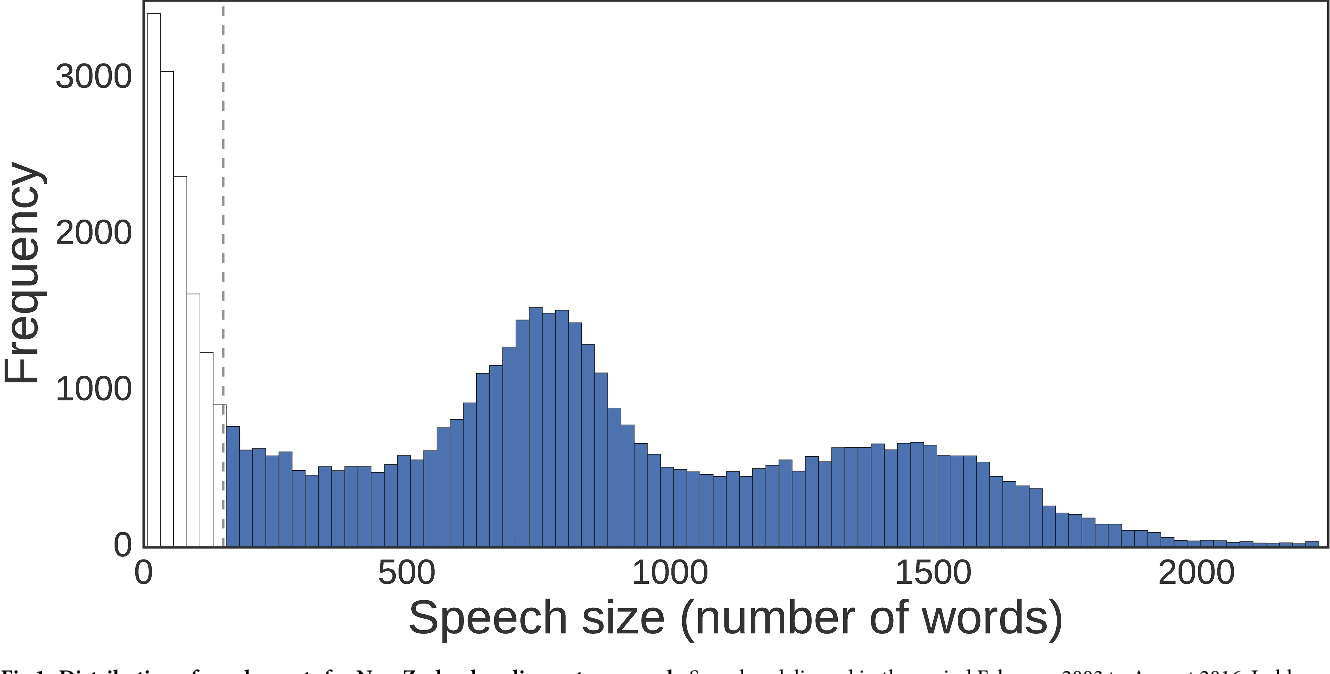 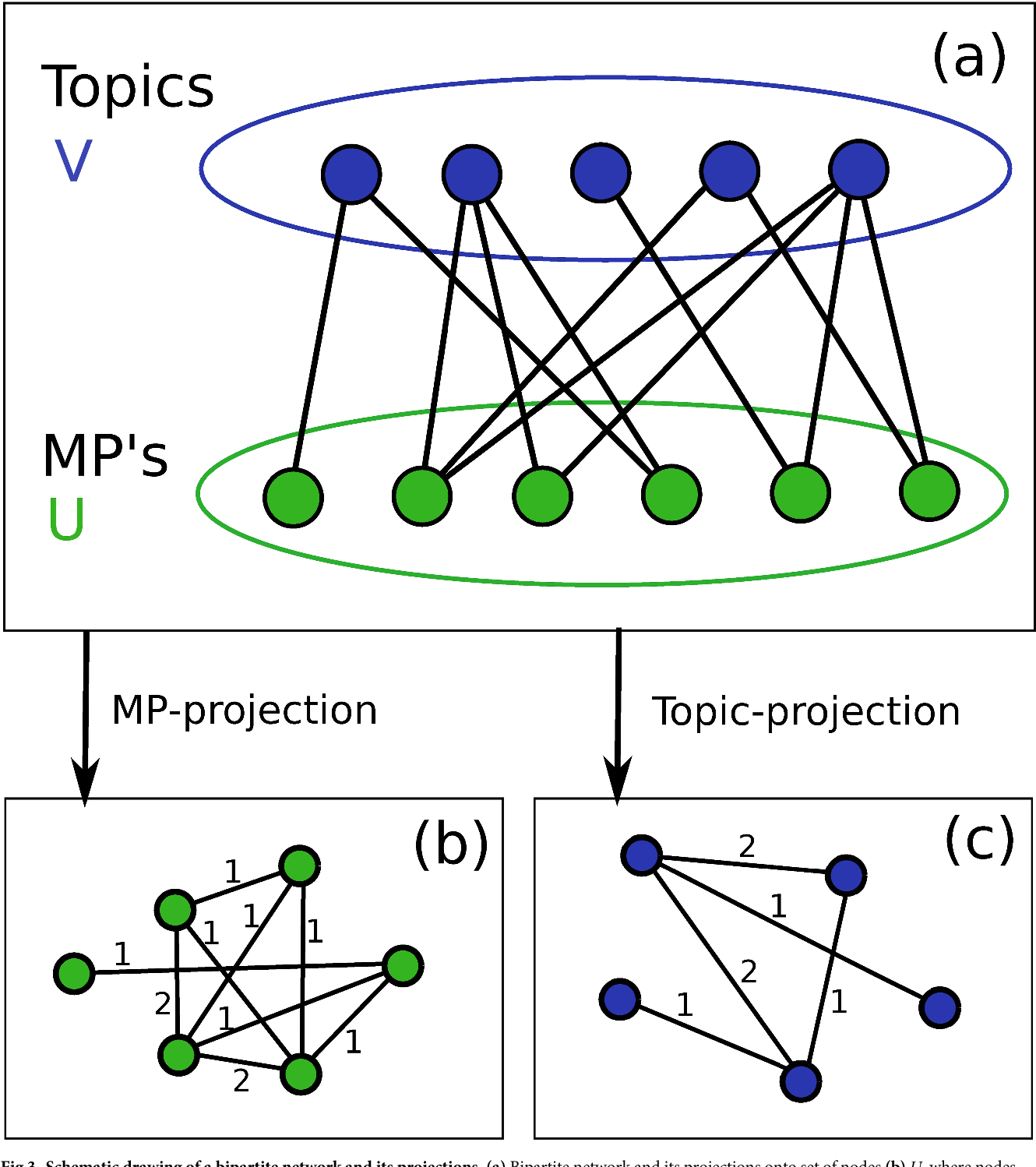 Quantitative methods to measure the participation to parliamentary debate and discourse of elected Members of Parliament (MPs) and the parties they belong to are lacking. This is an exploratory study in which we propose the development of a new approach for a quantitative analysis of such participation. We utilize the New Zealand government's digital Hansard database to construct a topic model of parliamentary speeches consisting of nearly 40 million words in the period 2003-2016. A Latent Dirichlet Allocation topic model is implemented in order to reveal the thematic structure of our set of documents. This generative statistical model enables the detection of major themes or topics that are publicly discussed in the New Zealand parliament, as well as permitting their classification by MP. Information on topic proportions is subsequently analyzed using a combination of statistical methods. We observe patterns arising from time-series analysis of topic frequencies which can be related to specific social, economic and legislative events. We then construct a bipartite network representation, linking MPs to topics, for each of four parliamentary terms in this time frame. We build projected networks (onto the set of nodes represented by MPs) and proceed to the study of the dynamical changes of their topology, including community structure. By performing this longitudinal network analysis, we can observe the evolution of the New Zealand parliamentary topic network and its main parties in the period studied. 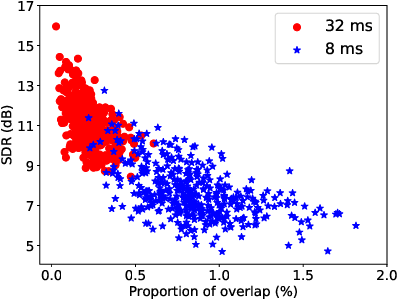 Time-frequency masking or spectrum prediction computed via short symmetric windows are commonly used in low-latency deep neural network (DNN) based source separation. In this paper, we propose the usage of an asymmetric analysis-synthesis window pair which allows for training with targets with better frequency resolution, while retaining the low-latency during inference suitable for real-time speech enhancement or assisted hearing applications. In order to assess our approach across various model types and datasets, we evaluate it with both speaker-independent deep clustering (DC) model and a speaker-dependent mask inference (MI) model. We report an improvement in separation performance of up to 1.5 dB in terms of source-to-distortion ratio (SDR) while maintaining an algorithmic latency of 8 ms. 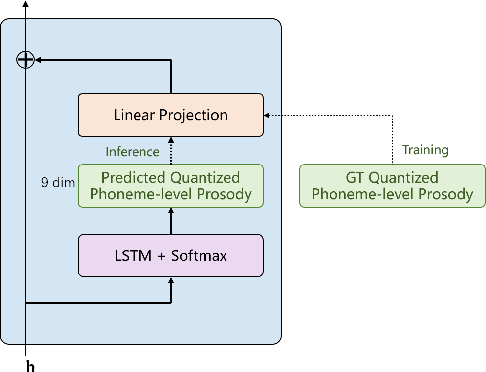 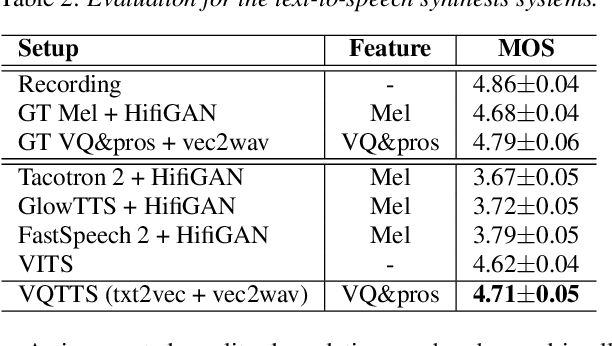 The mainstream neural text-to-speech(TTS) pipeline is a cascade system, including an acoustic model(AM) that predicts acoustic feature from the input transcript and a vocoder that generates waveform according to the given acoustic feature. However, the acoustic feature in current TTS systems is typically mel-spectrogram, which is highly correlated along both time and frequency axes in a complicated way, leading to a great difficulty for the AM to predict. Although high-fidelity audio can be generated by recent neural vocoders from ground-truth(GT) mel-spectrogram, the gap between the GT and the predicted mel-spectrogram from AM degrades the performance of the entire TTS system. In this work, we propose VQTTS, consisting of an AM txt2vec and a vocoder vec2wav, which uses self-supervised vector-quantized(VQ) acoustic feature rather than mel-spectrogram. We redesign both the AM and the vocoder accordingly. In particular, txt2vec basically becomes a classification model instead of a traditional regression model while vec2wav uses an additional feature encoder before HifiGAN generator for smoothing the discontinuous quantized feature. Our experiments show that vec2wav achieves better reconstruction performance than HifiGAN when using self-supervised VQ acoustic feature. Moreover, our entire TTS system VQTTS achieves state-of-the-art performance in terms of naturalness among all current publicly available TTS systems.