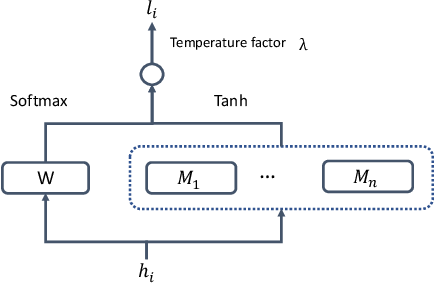 Long Short Term Memory Connectionist Temporal Classification (LSTM-CTC) based end-to-end models are widely used in speech recognition due to its simplicity in training and efficiency in decoding. In conventional LSTM-CTC based models, a bottleneck projection matrix maps the hidden feature vectors obtained from LSTM to softmax output layer. In this paper, we propose to use a high rank projection layer to replace the projection matrix. The output from the high rank projection layer is a weighted combination of vectors that are projected from the hidden feature vectors via different projection matrices and non-linear activation function. The high rank projection layer is able to improve the expressiveness of LSTM-CTC models. The experimental results show that on Wall Street Journal (WSJ) corpus and LibriSpeech data set, the proposed method achieves 4%-6% relative word error rate (WER) reduction over the baseline CTC system. They outperform other published CTC based end-to-end (E2E) models under the condition that no external data or data augmentation is applied. Code has been made available at https://github.com/mobvoi/lstm_ctc.

Towards Low-distortion Multi-channel Speech Enhancement: The ESPNet-SE Submission to The L3DAS22 Challenge 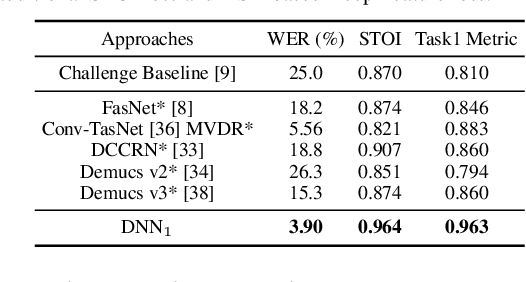 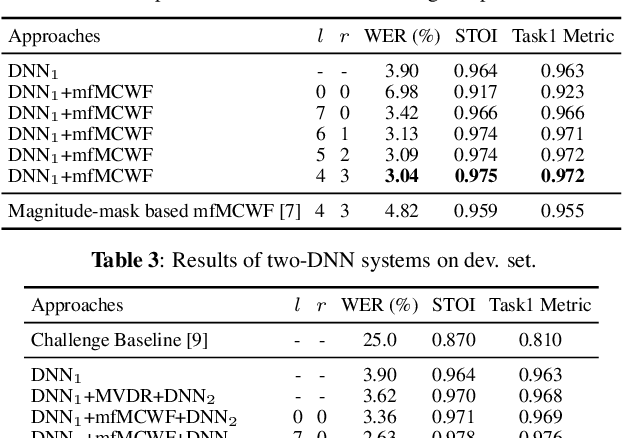 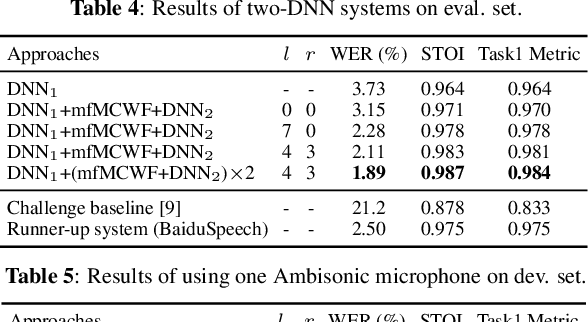 This paper describes our submission to the L3DAS22 Challenge Task 1, which consists of speech enhancement with 3D Ambisonic microphones. The core of our approach combines Deep Neural Network (DNN) driven complex spectral mapping with linear beamformers such as the multi-frame multi-channel Wiener filter. Our proposed system has two DNNs and a linear beamformer in between. Both DNNs are trained to perform complex spectral mapping, using a combination of waveform and magnitude spectrum losses. The estimated signal from the first DNN is used to drive a linear beamformer, and the beamforming result, together with this enhanced signal, are used as extra inputs for the second DNN which refines the estimation. Then, from this new estimated signal, the linear beamformer and second DNN are run iteratively. The proposed method was ranked first in the challenge, achieving, on the evaluation set, a ranking metric of 0.984, versus 0.833 of the challenge baseline.

Recently, Transformers have shown competitive automatic speech recognition (ASR) results. One key factor to the success of these models is the multi-head attention mechanism. However, we observed in trained models, the diagonal attention matrices indicating the redundancy of the corresponding attention heads. Furthermore, we found some architectures with reduced numbers of attention heads have better performance. Since the search for the best structure is time prohibitive, we propose to randomly remove attention heads during training and keep all attention heads at test time, thus the final model can be viewed as an average of models with different architectures. This method gives consistent performance gains on the Wall Street Journal, AISHELL, Switchboard and AMI ASR tasks. On the AISHELL dev/test sets, the proposed method achieves state-of-the-art Transformer results with 5.8%/6.3% word error rates. 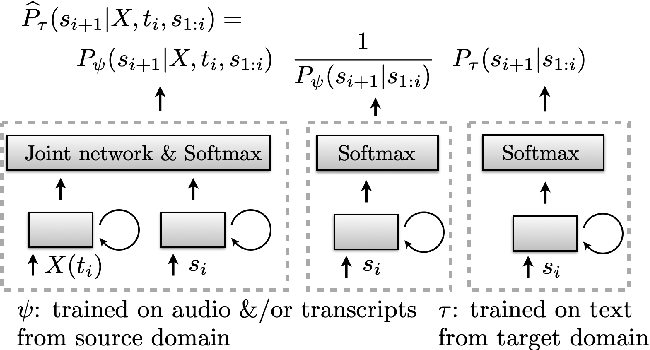 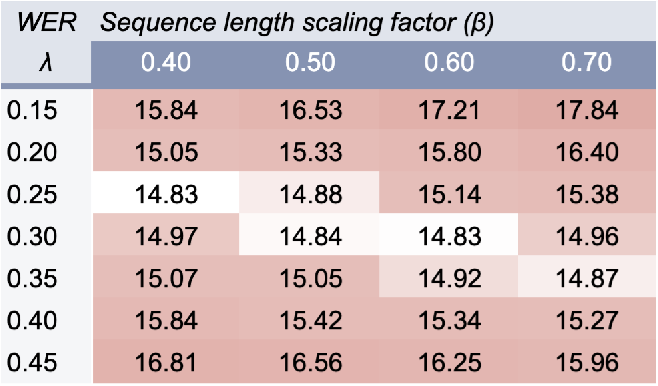 This article describes a density ratio approach to integrating external Language Models (LMs) into end-to-end models for Automatic Speech Recognition (ASR). Applied to a Recurrent Neural Network Transducer (RNN-T) ASR model trained on a given domain, a matched in-domain RNN-LM, and a target domain RNN-LM, the proposed method uses Bayes' Rule to define RNN-T posteriors for the target domain, in a manner directly analogous to the classic hybrid model for ASR based on Deep Neural Networks (DNNs) or LSTMs in the Hidden Markov Model (HMM) framework (Bourlard & Morgan, 1994). The proposed approach is evaluated in cross-domain and limited-data scenarios, for which a significant amount of target domain text data is used for LM training, but only limited (or no) {audio, transcript} training data pairs are used to train the RNN-T. Specifically, an RNN-T model trained on paired audio & transcript data from YouTube is evaluated for its ability to generalize to Voice Search data. The Density Ratio method was found to consistently outperform the dominant approach to LM and end-to-end ASR integration, Shallow Fusion. 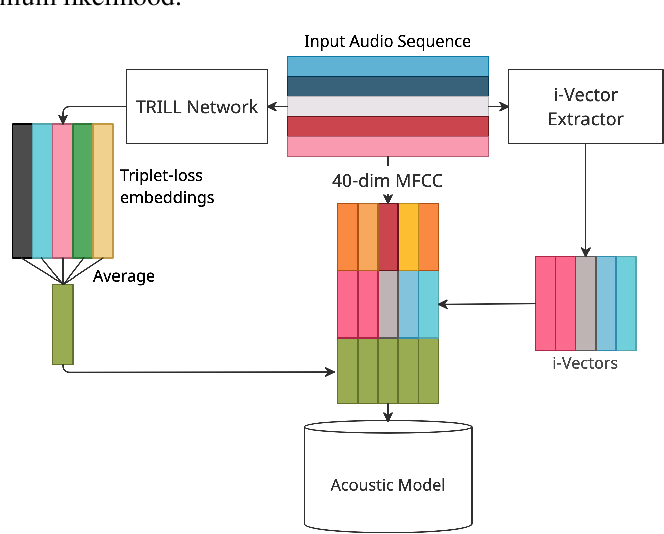 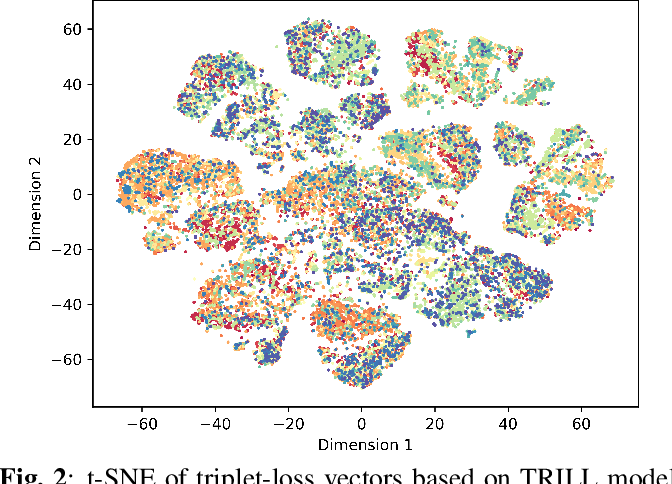 In this study, we propose to investigate triplet loss for the purpose of an alternative feature representation for ASR. We consider a general non-semantic speech representation, which is trained with a self-supervised criteria based on triplet loss called TRILL, for acoustic modeling to represent the acoustic characteristics of each audio. This strategy is then applied to the CHiME-4 corpus and CRSS-UTDallas Fearless Steps Corpus, with emphasis on the 100-hour challenge corpus which consists of 5 selected NASA Apollo-11 channels. An analysis of the extracted embeddings provides the foundation needed to characterize training utterances into distinct groups based on acoustic distinguishing properties. Moreover, we also demonstrate that triplet-loss based embedding performs better than i-Vector in acoustic modeling, confirming that the triplet loss is more effective than a speaker feature. With additional techniques such as pronunciation and silence probability modeling, plus multi-style training, we achieve a +5.42% and +3.18% relative WER improvement for the development and evaluation sets of the Fearless Steps Corpus. To explore generalization, we further test the same technique on the 1 channel track of CHiME-4 and observe a +11.90% relative WER improvement for real test data. 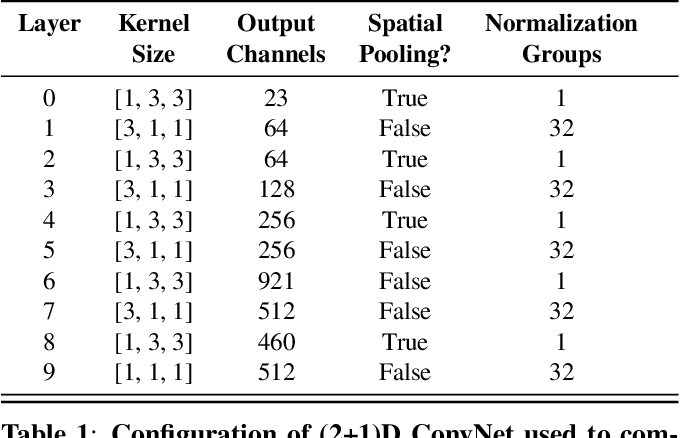 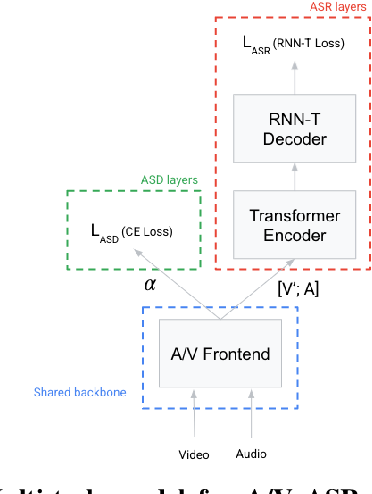 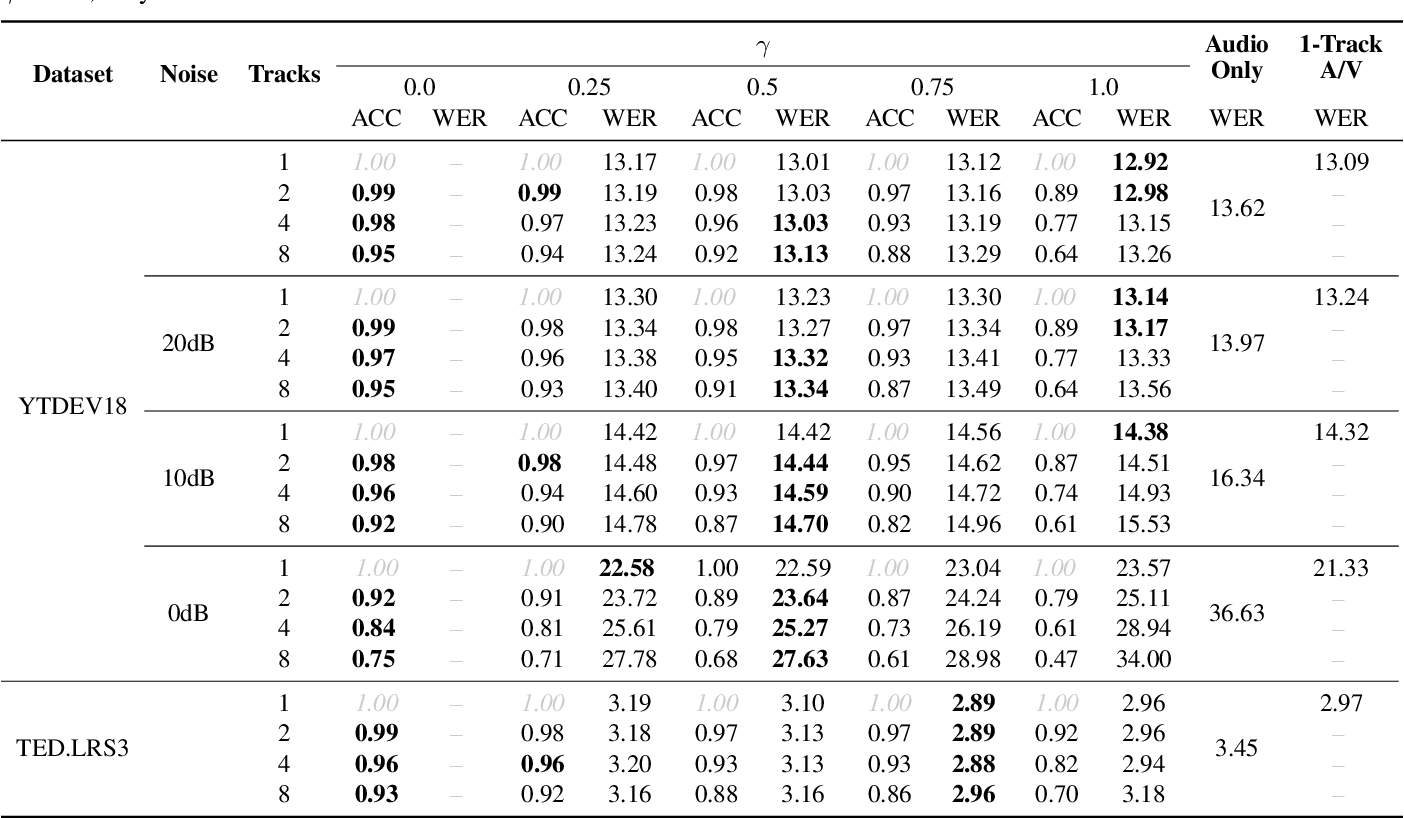 Under noisy conditions, automatic speech recognition (ASR) can greatly benefit from the addition of visual signals coming from a video of the speaker's face. However, when multiple candidate speakers are visible this traditionally requires solving a separate problem, namely active speaker detection (ASD), which entails selecting at each moment in time which of the visible faces corresponds to the audio. Recent work has shown that we can solve both problems simultaneously by employing an attention mechanism over the competing video tracks of the speakers' faces, at the cost of sacrificing some accuracy on active speaker detection. This work closes this gap in active speaker detection accuracy by presenting a single model that can be jointly trained with a multi-task loss. By combining the two tasks during training we reduce the ASD classification accuracy by approximately 25%, while simultaneously improving the ASR performance when compared to the multi-person baseline trained exclusively for ASR. 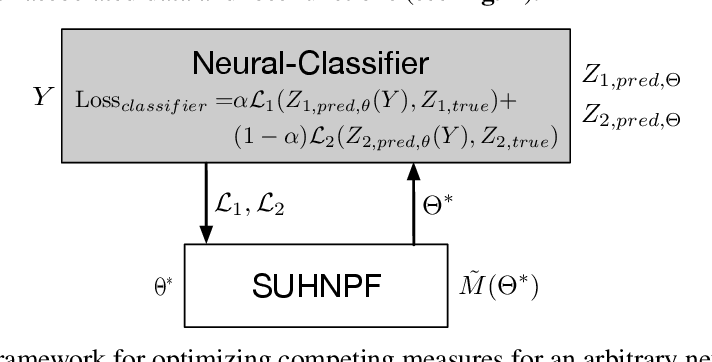 Recent work has emphasized the importance of balancing competing objectives in model training (e.g., accuracy vs. fairness, or competing measures of fairness). Such trade-offs reflect a broader class of multi-objective optimization (MOO) problems in which optimization methods seek Pareto optimal trade-offs between competing goals. In this work, we first introduce a differentiable measure that enables direct optimization of group fairness (specifically, balancing accuracy across groups) in model training. Next, we demonstrate two model-agnostic MOO frameworks for learning Pareto optimal parameterizations over different groups of neural classification models. We evaluate our methods on the specific task of hate speech detection, in which prior work has shown lack of group fairness across speakers of different English dialects. Empirical results across convolutional, sequential, and transformer-based neural architectures show superior empirical accuracy vs. fairness trade-offs over prior work. More significantly, our measure enables the Pareto machinery to ensure that each architecture achieves the best possible trade-off between fairness and accuracy w.r.t. the dataset, given user-prescribed error tolerance bounds. 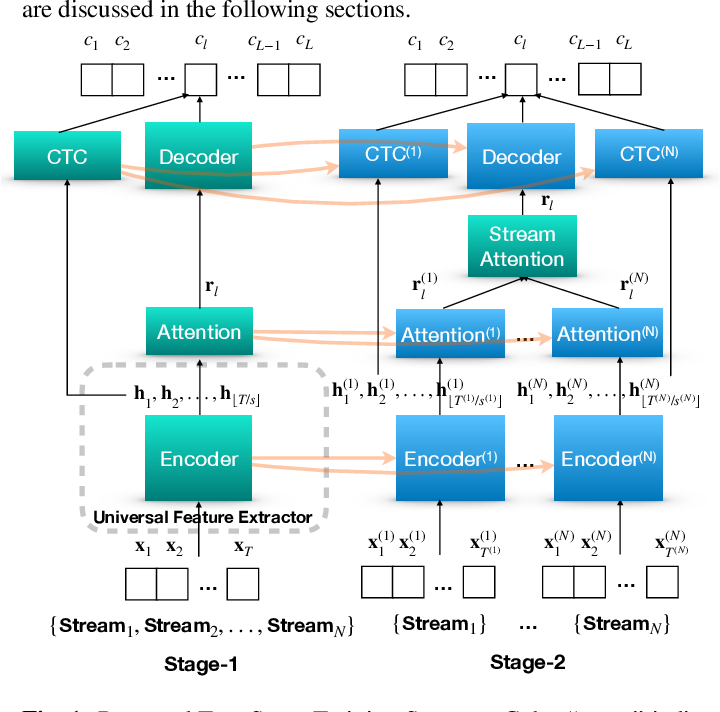 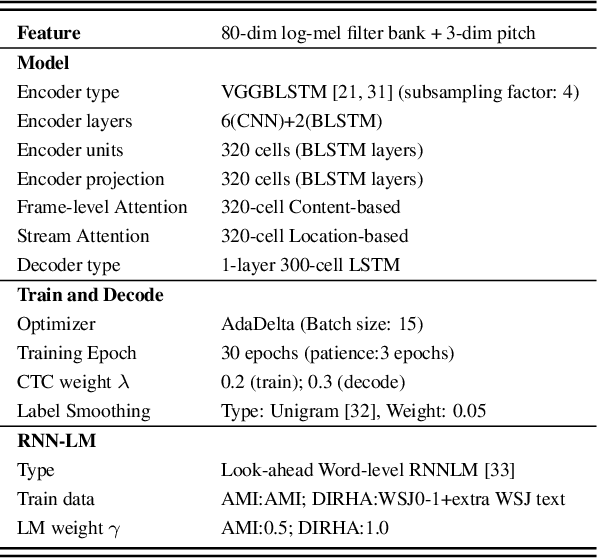 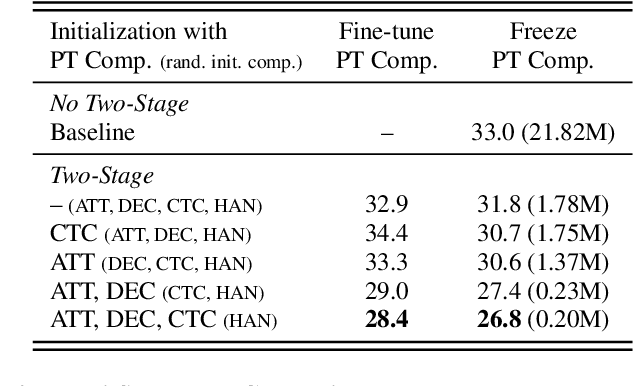 The multi-stream paradigm of audio processing, in which several sources are simultaneously considered, has been an active research area for information fusion. Our previous study offered a promising direction within end-to-end automatic speech recognition, where parallel encoders aim to capture diverse information followed by a stream-level fusion based on attention mechanisms to combine the different views. However, with an increasing number of streams resulting in an increasing number of encoders, the previous approach could require substantial memory and massive amounts of parallel data for joint training. In this work, we propose a practical two-stage training scheme. Stage-1 is to train a Universal Feature Extractor (UFE), where encoder outputs are produced from a single-stream model trained with all data. Stage-2 formulates a multi-stream scheme intending to solely train the attention fusion module using the UFE features and pretrained components from Stage-1. Experiments have been conducted on two datasets, DIRHA and AMI, as a multi-stream scenario. Compared with our previous method, this strategy achieves relative word error rate reductions of 8.2--32.4%, while consistently outperforming several conventional combination methods. 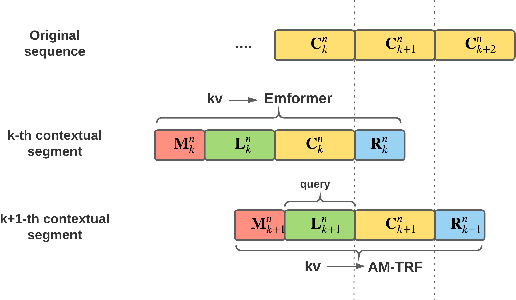 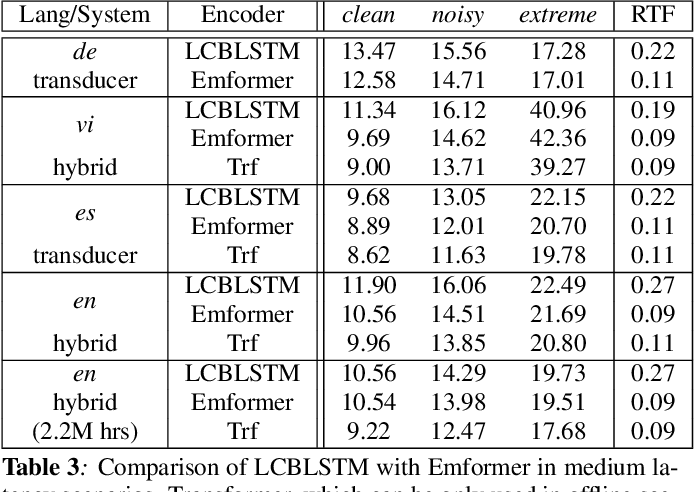 In this paper, we summarize the application of transformer and its streamable variant, Emformer based acoustic model for large scale speech recognition applications. We compare the transformer based acoustic models with their LSTM counterparts on industrial scale tasks. Specifically, we compare Emformer with latency-controlled BLSTM (LCBLSTM) on medium latency tasks and LSTM on low latency tasks. On a low latency voice assistant task, Emformer gets 24% to 26% relative word error rate reductions (WERRs). For medium latency scenarios, comparing with LCBLSTM with similar model size and latency, Emformer gets significant WERR across four languages in video captioning datasets with 2-3 times inference real-time factors reduction. 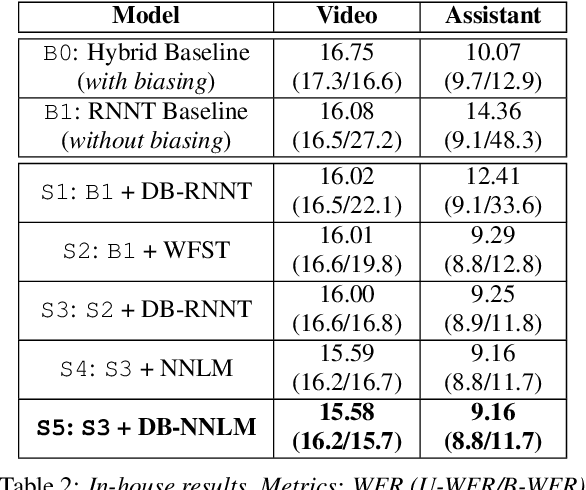 How to leverage dynamic contextual information in end-to-end speech recognition has remained an active research area. Previous solutions to this problem were either designed for specialized use cases that did not generalize well to open-domain scenarios, did not scale to large biasing lists, or underperformed on rare long-tail words. We address these limitations by proposing a novel solution that combines shallow fusion, trie-based deep biasing, and neural network language model contextualization. These techniques result in significant 19.5% relative Word Error Rate improvement over existing contextual biasing approaches and 5.4%-9.3% improvement compared to a strong hybrid baseline on both open-domain and constrained contextualization tasks, where the targets consist of mostly rare long-tail words. Our final system remains lightweight and modular, allowing for quick modification without model re-training.