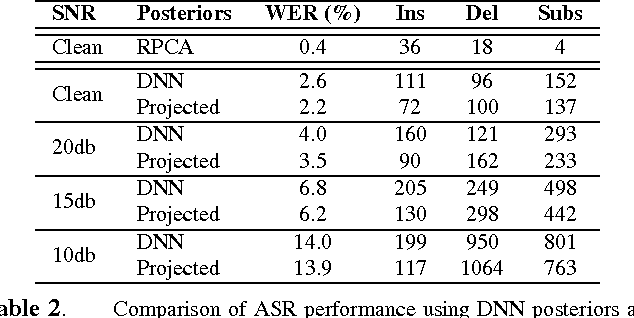 We propose to model the acoustic space of deep neural network (DNN) class-conditional posterior probabilities as a union of low-dimensional subspaces. To that end, the training posteriors are used for dictionary learning and sparse coding. Sparse representation of the test posteriors using this dictionary enables projection to the space of training data. Relying on the fact that the intrinsic dimensions of the posterior subspaces are indeed very small and the matrix of all posteriors belonging to a class has a very low rank, we demonstrate how low-dimensional structures enable further enhancement of the posteriors and rectify the spurious errors due to mismatch conditions. The enhanced acoustic modeling method leads to improvements in continuous speech recognition task using hybrid DNN-HMM (hidden Markov model) framework in both clean and noisy conditions, where upto 15.4% relative reduction in word error rate (WER) is achieved. 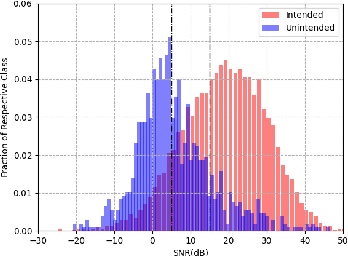 We address the problem of detecting speech directed to a device that does not contain a specific wake-word. Specifically, we focus on audio coming from a touch-based invocation. Mitigating virtual assistants (VAs) activation due to accidental button presses is critical for user experience. While the majority of approaches to false trigger mitigation (FTM) are designed to detect the presence of a target keyword, inferring user intent in absence of keyword is difficult. This also poses a challenge when creating the training/evaluation data for such systems due to inherent ambiguity in the user's data. To this end, we propose a novel FTM approach that uses weakly-labeled training data obtained with a newly introduced data sampling strategy. While this sampling strategy reduces data annotation efforts, the data labels are noisy as the data are not annotated manually. We use these data to train an acoustics-only model for the FTM task by regularizing its loss function via knowledge distillation from an ASR-based (LatticeRNN) model. This improves the model decisions, resulting in 66% gain in accuracy, as measured by equal-error-rate (EER), over the base acoustics-only model. We also show that the ensemble of the LatticeRNN and acoustic-distilled models brings further accuracy improvement of 20%. 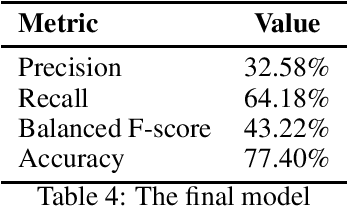 This paper presents our contribution to PolEval 2019 Task 6: Hate speech and bullying detection. We describe three parallel approaches that we followed: fine-tuning a pre-trained ULMFiT model to our classification task, fine-tuning a pre-trained BERT model to our classification task, and using the TPOT library to find the optimal pipeline. We present results achieved by these three tools and review their advantages and disadvantages in terms of user experience. Our team placed second in subtask 2 with a shallow model found by TPOT: a~logistic regression classifier with non-trivial feature engineering. 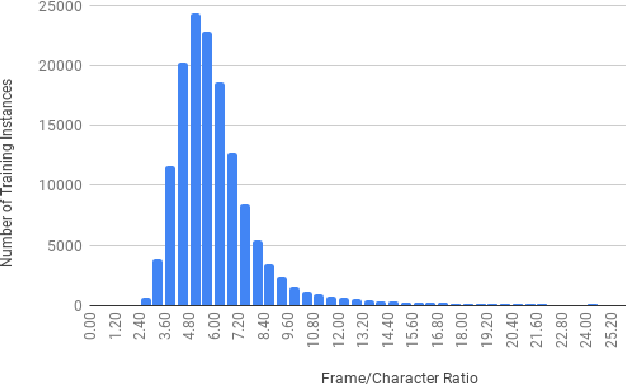 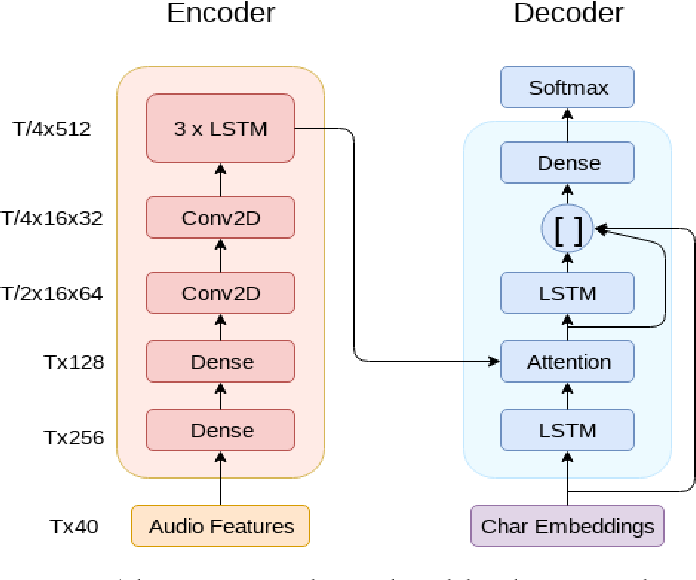 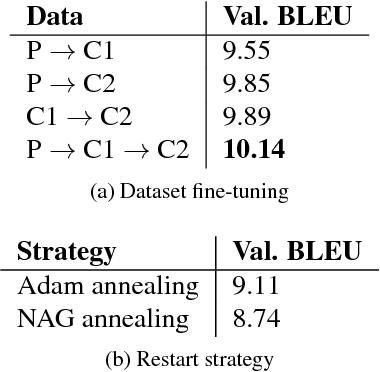 This paper describes FBK's submission to the end-to-end English-German speech translation task at IWSLT 2018. Our system relies on a state-of-the-art model based on LSTMs and CNNs, where the CNNs are used to reduce the temporal dimension of the audio input, which is in general much higher than machine translation input. Our model was trained only on the audio-to-text parallel data released for the task, and fine-tuned on cleaned subsets of the original training corpus. The addition of weight normalization and label smoothing improved the baseline system by 1.0 BLEU point on our validation set. The final submission also featured checkpoint averaging within a training run and ensemble decoding of models trained during multiple runs. On test data, our best single model obtained a BLEU score of 9.7, while the ensemble obtained a BLEU score of 10.24.

Robustness to environmental noise is important to creating automatic speech emotion recognition systems that are deployable in the real world. Prior work on noise robustness has assumed that systems would not make use of sample-by-sample training noise conditions, or that they would have access to unlabelled testing data to generalize across noise conditions. We avoid these assumptions and introduce the resulting task as heterogeneous condition training. We show that with full knowledge of the test noise conditions, we can improve performance by dynamically routing samples to specialized feature encoders for each noise condition, and with partial knowledge, we can use known noise conditions and domain adaptation algorithms to train systems that generalize well to unseen noise conditions. We then extend these improvements to the multimodal setting by dynamically routing samples to maintain temporal ordering, resulting in significant improvements over approaches that do not specialize or generalize based on noise type. 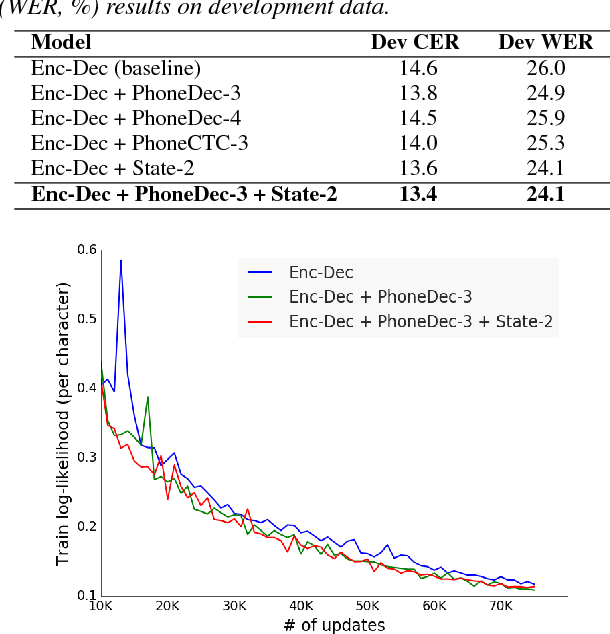 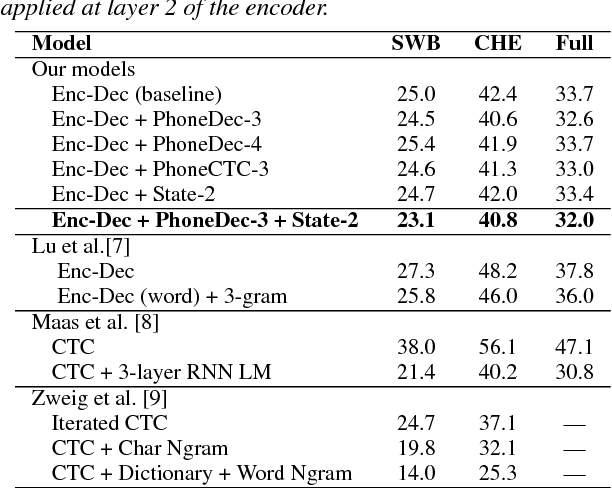 End-to-end training of deep learning-based models allows for implicit learning of intermediate representations based on the final task loss. However, the end-to-end approach ignores the useful domain knowledge encoded in explicit intermediate-level supervision. We hypothesize that using intermediate representations as auxiliary supervision at lower levels of deep networks may be a good way of combining the advantages of end-to-end training and more traditional pipeline approaches. We present experiments on conversational speech recognition where we use lower-level tasks, such as phoneme recognition, in a multitask training approach with an encoder-decoder model for direct character transcription. We compare multiple types of lower-level tasks and analyze the effects of the auxiliary tasks. Our results on the Switchboard corpus show that this approach improves recognition accuracy over a standard encoder-decoder model on the Eval2000 test set. 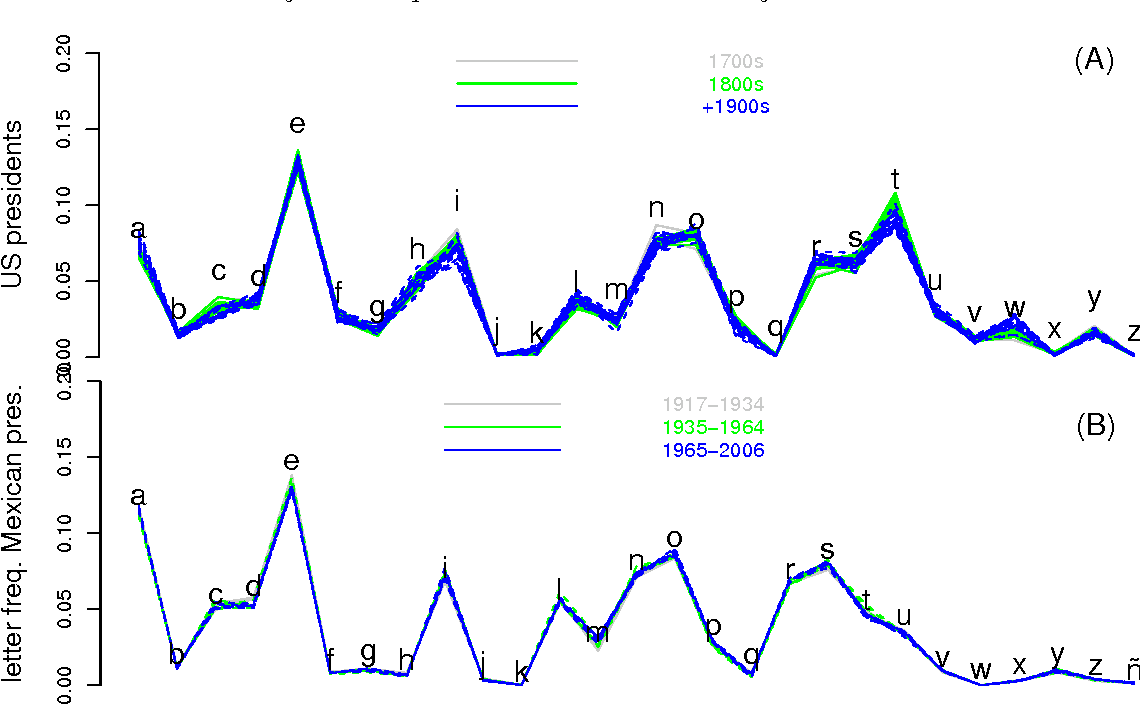 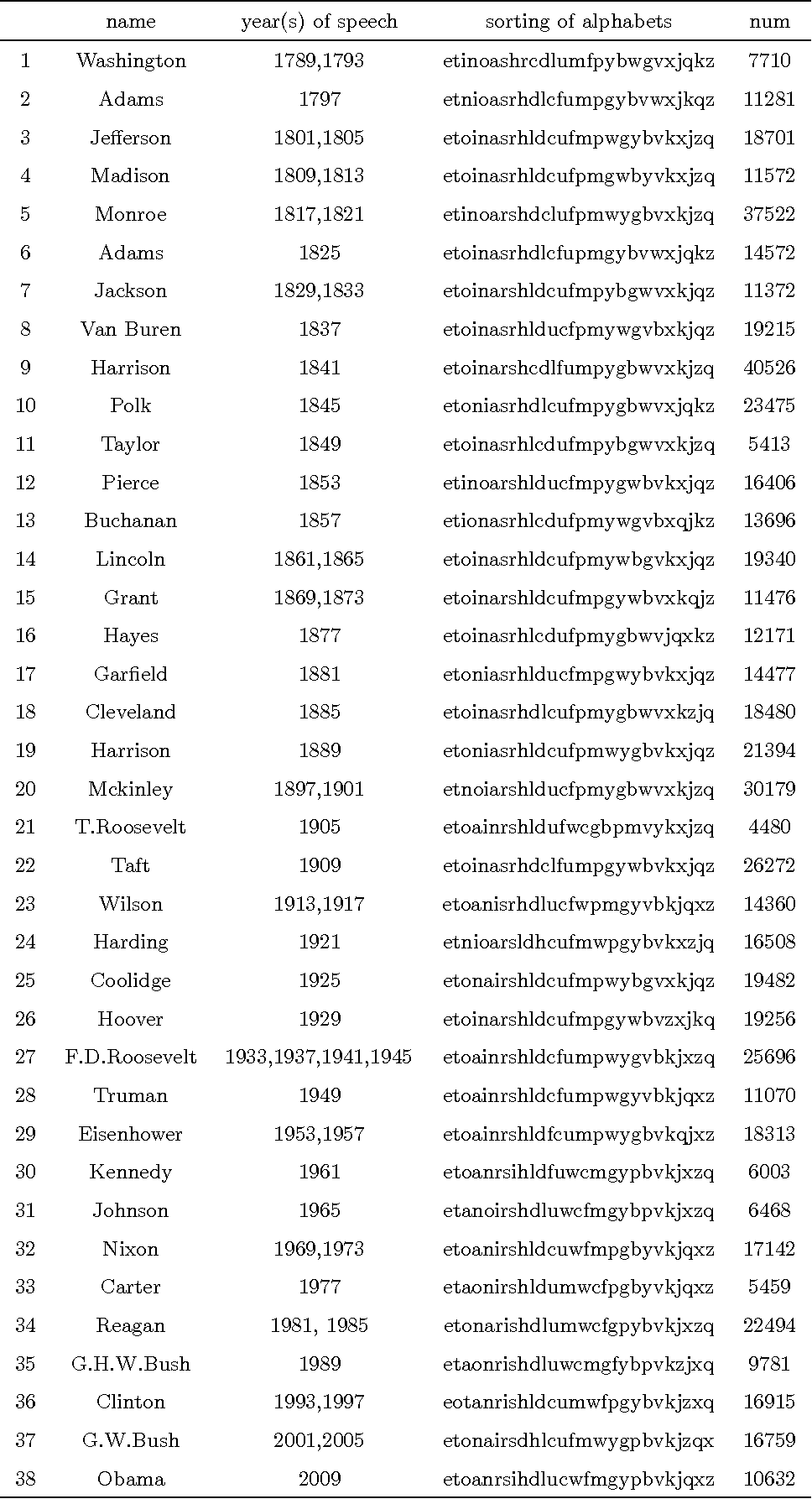 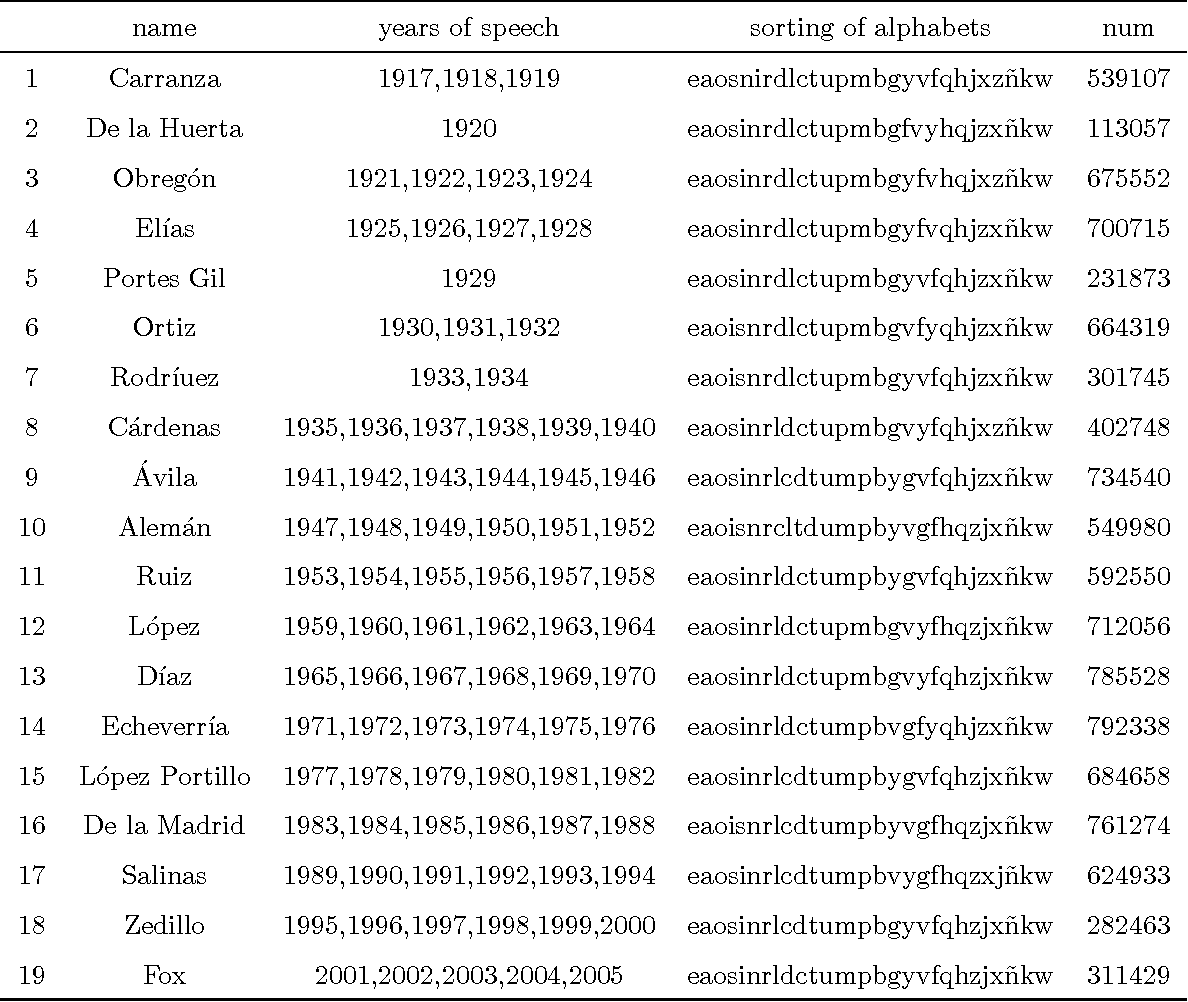 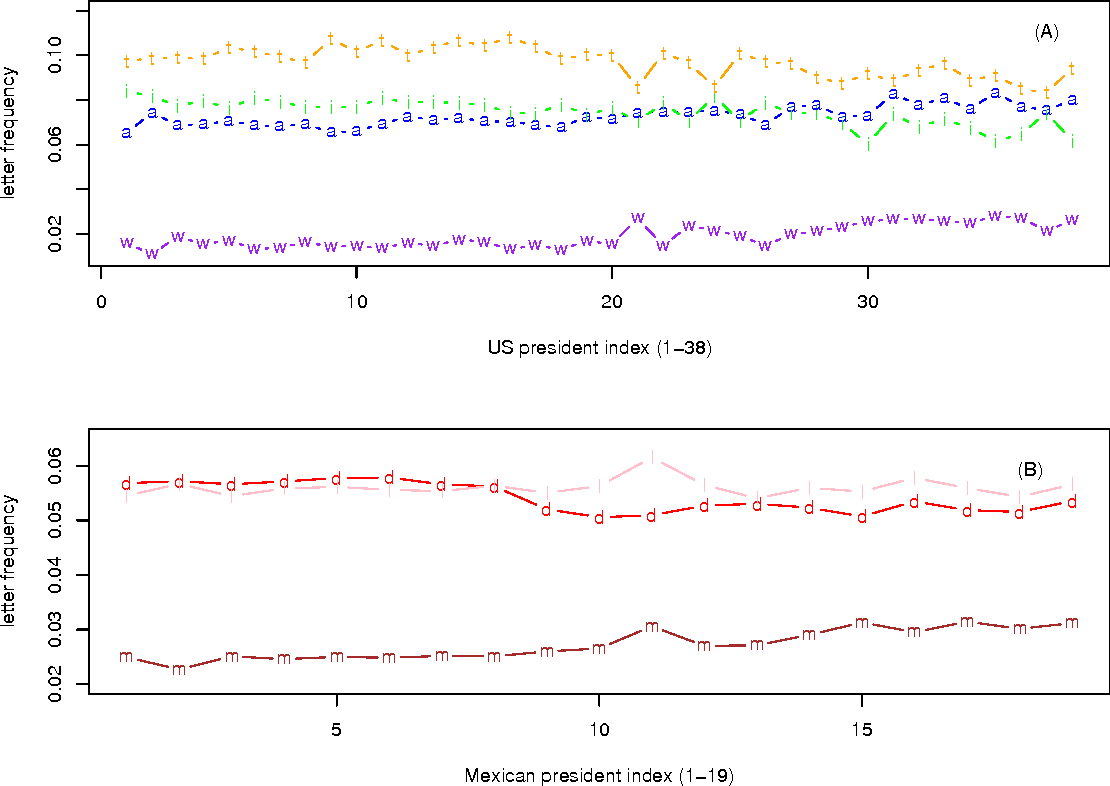 The limited range in its abscissa of ranked letter frequency distributions causes multiple functions to fit the observed distribution reasonably well. In order to critically compare various functions, we apply the statistical model selections on ten functions, using the texts of U.S. and Mexican presidential speeches in the last 1-2 centuries. Dispite minor switching of ranking order of certain letters during the temporal evolution for both datasets, the letter usage is generally stable. The best fitting function, judged by either least-square-error or by AIC/BIC model selection, is the Cocho/Beta function. We also use a novel method to discover clusters of letters by their observed-over-expected frequency ratios. 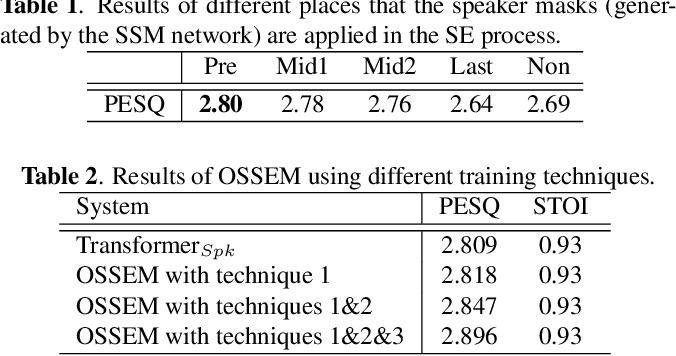 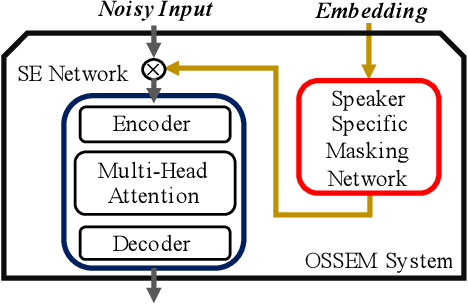 Although deep learning (DL) has achieved notable progress in speech enhancement (SE), further research is still required for a DL-based SE system to adapt effectively and efficiently to particular speakers. In this study, we propose a novel meta-learning-based speaker-adaptive SE approach (called OSSEM) that aims to achieve SE model adaptation in a one-shot manner. OSSEM consists of a modified transformer SE network and a speaker-specific masking (SSM) network. In practice, the SSM network takes an enrolled speaker embedding extracted using ECAPA-TDNN to adjust the input noisy feature through masking. To evaluate OSSEM, we designed a modified Voice Bank-DEMAND dataset, in which one utterance from the testing set was used for model adaptation, and the remaining utterances were used for testing the performance. Moreover, we set restrictions allowing the enhancement process to be conducted in real time, and thus designed OSSEM to be a causal SE system. Experimental results first show that OSSEM can effectively adapt a pretrained SE model to a particular speaker with only one utterance, thus yielding improved SE results. Meanwhile, OSSEM exhibits a competitive performance compared to state-of-the-art causal SE systems. 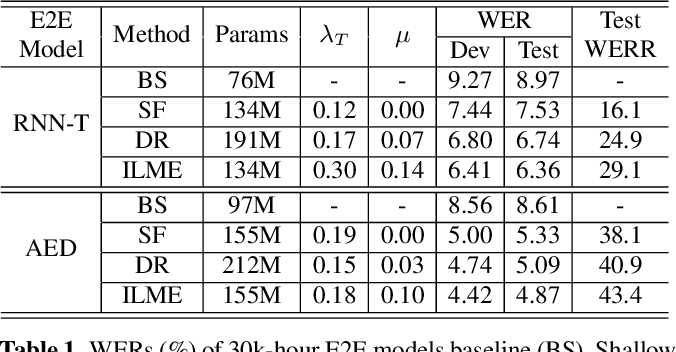 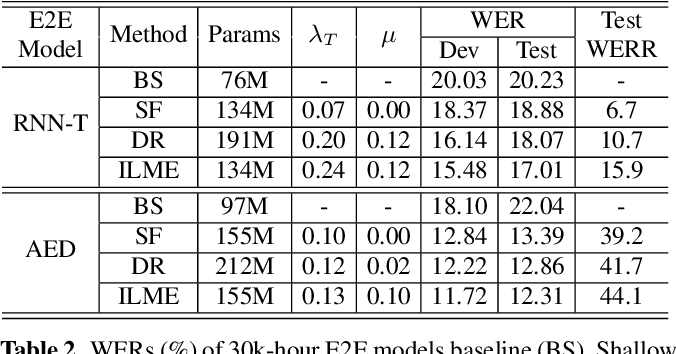 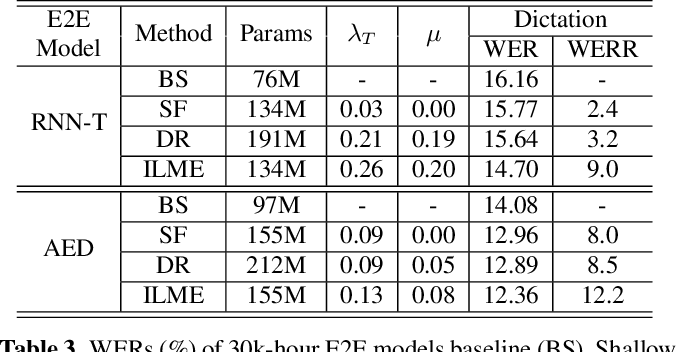 The external language models (LM) integration remains a challenging task for end-to-end (E2E) automatic speech recognition (ASR) which has no clear division between acoustic and language models. In this work, we propose an internal LM estimation (ILME) method to facilitate a more effective integration of the external LM with all pre-existing E2E models with no additional model training, including the most popular recurrent neural network transducer (RNN-T) and attention-based encoder-decoder (AED) models. Trained with audio-transcript pairs, an E2E model implicitly learns an internal LM that characterizes the training data in the source domain. With ILME, the internal LM scores of an E2E model are estimated and subtracted from the log-linear interpolation between the scores of the E2E model and the external LM. The internal LM scores are approximated as the output of an E2E model when eliminating its acoustic components. ILME can alleviate the domain mismatch between training and testing, or improve the multi-domain E2E ASR. Experimented with 30K-hour trained RNN-T and AED models, ILME achieves up to 15.5% and 6.8% relative word error rate reductions from Shallow Fusion on out-of-domain LibriSpeech and in-domain Microsoft production test sets, respectively. 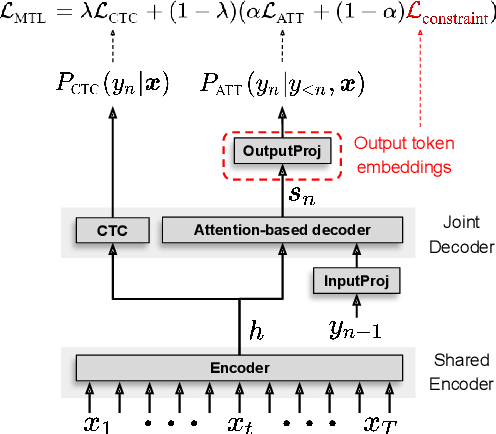 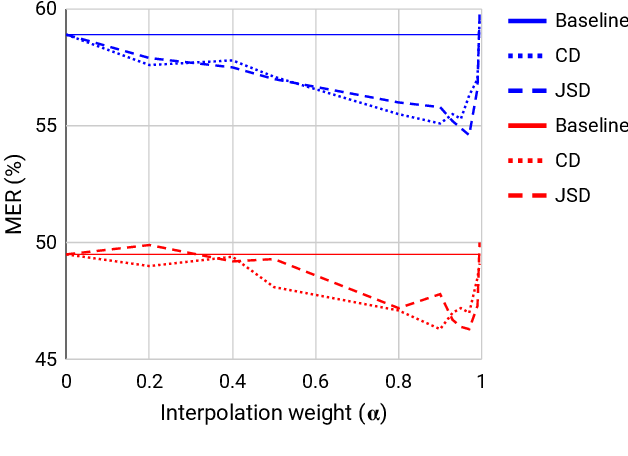 The lack of code-switch training data is one of the major concerns in the development of end-to-end code-switching automatic speech recognition (ASR) models. In this work, we propose a method to train an improved end-to-end code-switching ASR using only monolingual data. Our method encourages the distributions of output token embeddings of monolingual languages to be similar, and hence, promotes the ASR model to easily code-switch between languages. Specifically, we propose to use Jensen-Shannon divergence and cosine distance based constraints. The former will enforce output embeddings of monolingual languages to possess similar distributions, while the later simply brings the centroids of two distributions to be close to each other. Experimental results demonstrate high effectiveness of the proposed method, yielding up to 4.5% absolute mixed error rate improvement on Mandarin-English code-switching ASR task.