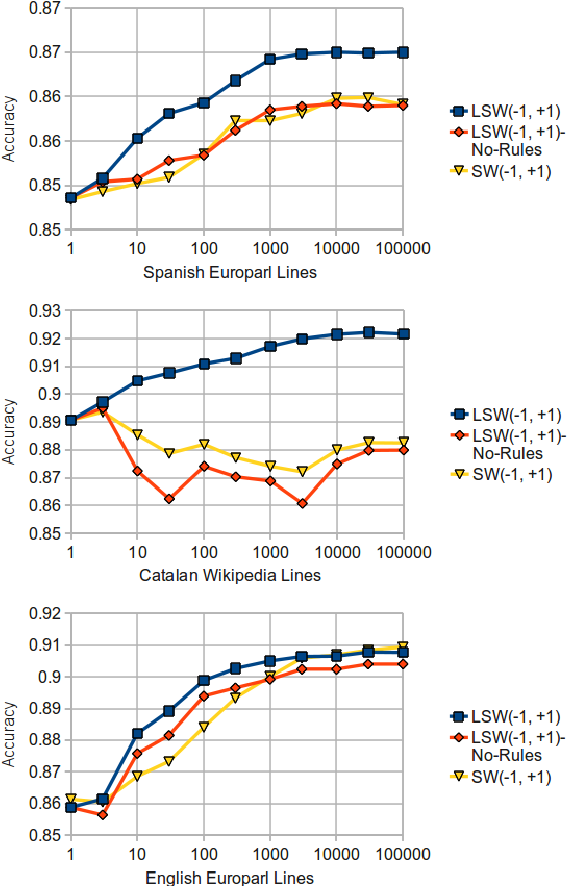 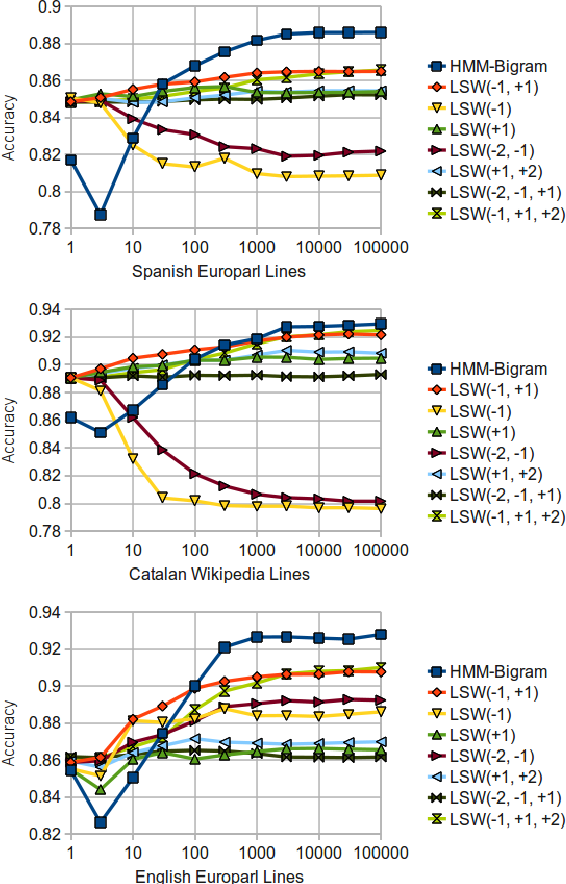 This paper describes a free/open-source implementation of the light sliding-window (LSW) part-of-speech tagger for the Apertium free/open-source machine translation platform. Firstly, the mechanism and training process of the tagger are reviewed, and a new method for incorporating linguistic rules is proposed. Secondly, experiments are conducted to compare the performances of the tagger under different window settings, with or without Apertium-style "forbid" rules, with or without Constraint Grammar, and also with respect to the traditional HMM tagger in Apertium. 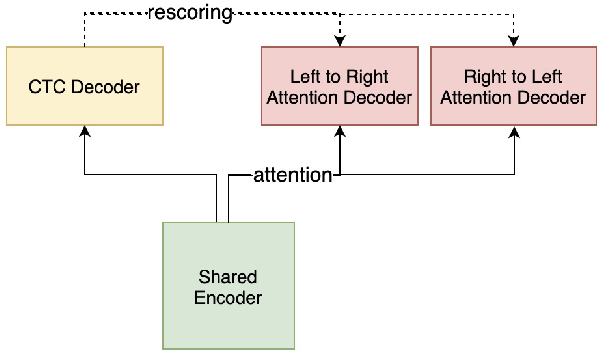 Recently, we made available WeNet, a production-oriented end-to-end speech recognition toolkit, which introduces a unified two-pass (U2) framework and a built-in runtime to address the streaming and non-streaming decoding modes in a single model. To further improve ASR performance and facilitate various production requirements, in this paper, we present WeNet 2.0 with four important updates. (1) We propose U2++, a unified two-pass framework with bidirectional attention decoders, which includes the future contextual information by a right-to-left attention decoder to improve the representative ability of the shared encoder and the performance during the rescoring stage. (2) We introduce an n-gram based language model and a WFST-based decoder into WeNet 2.0, promoting the use of rich text data in production scenarios. (3) We design a unified contextual biasing framework, which leverages user-specific context (e.g., contact lists) to provide rapid adaptation ability for production and improves ASR accuracy in both with-LM and without-LM scenarios. (4) We design a unified IO to support large-scale data for effective model training. In summary, the brand-new WeNet 2.0 achieves up to 10\% relative recognition performance improvement over the original WeNet on various corpora and makes available several important production-oriented features. 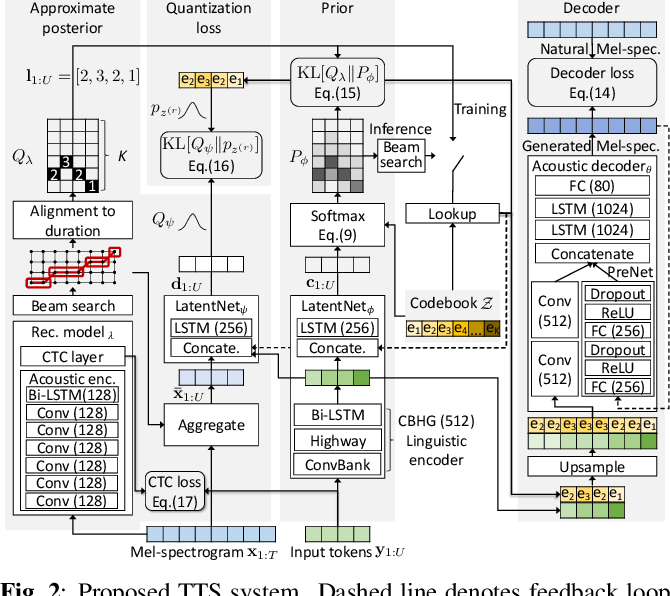 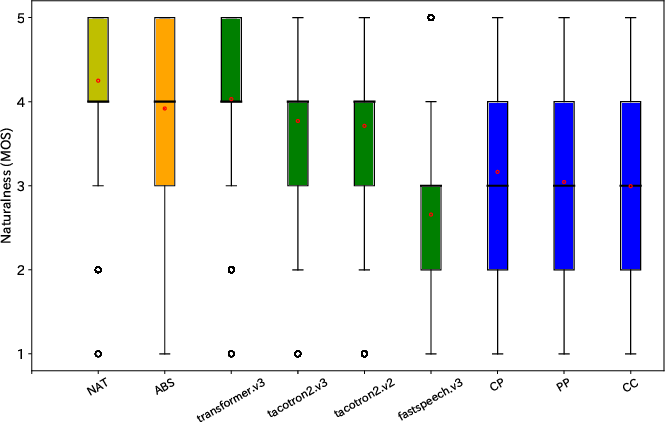 Explicit duration modeling is a key to achieving robust and efficient alignment in text-to-speech synthesis (TTS). We propose a new TTS framework using explicit duration modeling that incorporates duration as a discrete latent variable to TTS and enables joint optimization of whole modules from scratch. We formulate our method based on conditional VQ-VAE to handle discrete duration in a variational autoencoder and provide a theoretical explanation to justify our method. In our framework, a connectionist temporal classification (CTC) -based force aligner acts as the approximate posterior, and text-to-duration works as the prior in the variational autoencoder. We evaluated our proposed method with a listening test and compared it with other TTS methods based on soft-attention or explicit duration modeling. The results showed that our systems rated between soft-attention-based methods (Transformer-TTS, Tacotron2) and explicit duration modeling-based methods (Fastspeech). 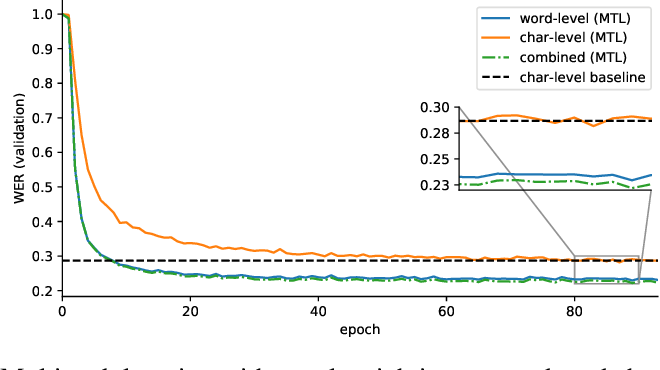 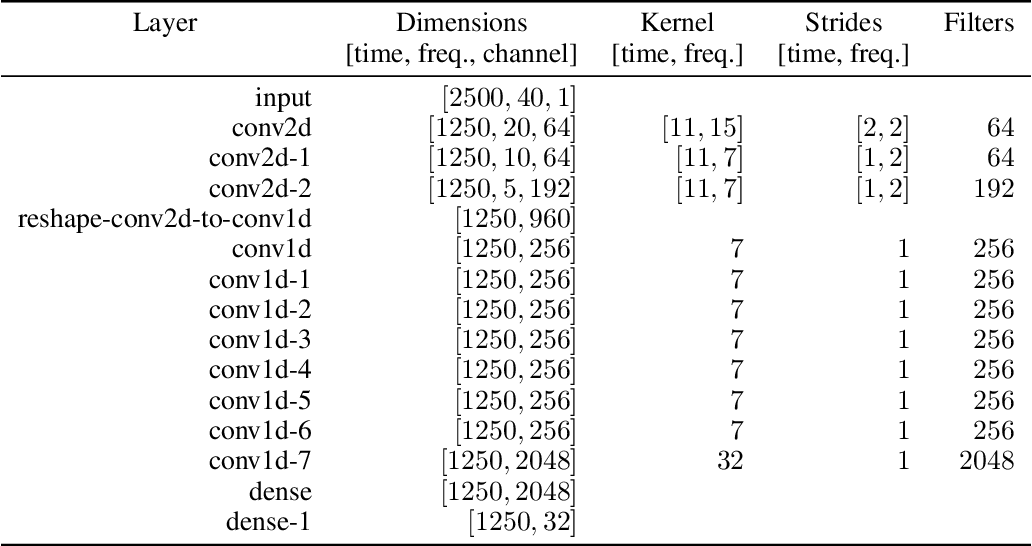 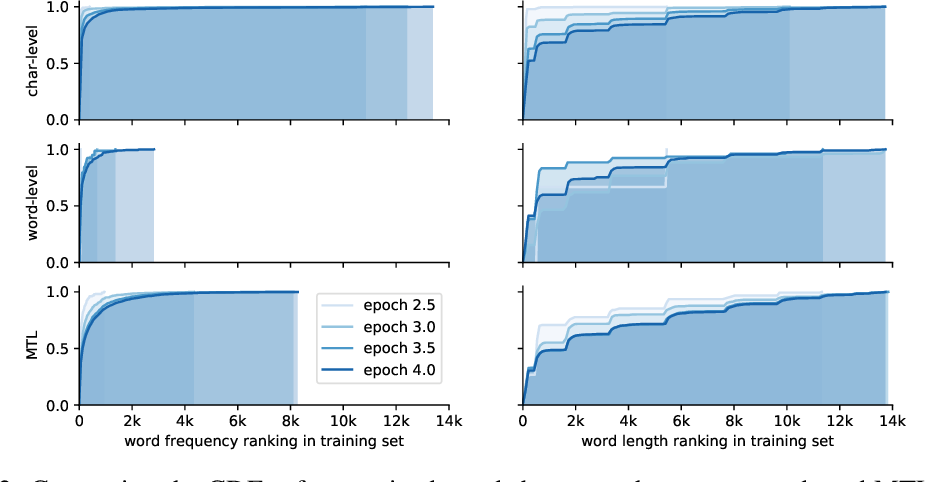 End-to-end automatic speech recognition (ASR) commonly transcribes audio signals into sequences of characters while its performance is evaluated by measuring the word-error rate (WER). This suggests that predicting sequences of words directly may be helpful instead. However, training with word-level supervision can be more difficult due to the sparsity of examples per label class. In this paper we analyze an end-to-end ASR model that combines a word-and-character representation in a multi-task learning (MTL) framework. We show that it improves on the WER and study how the word-level model can benefit from character-level supervision by analyzing the learned inductive preference bias of each model component empirically. We find that by adding character-level supervision, the MTL model interpolates between recognizing more frequent words (preferred by the word-level model) and shorter words (preferred by the character-level model).


* Accepted at the IRASL workshop at NeurIPS 2018 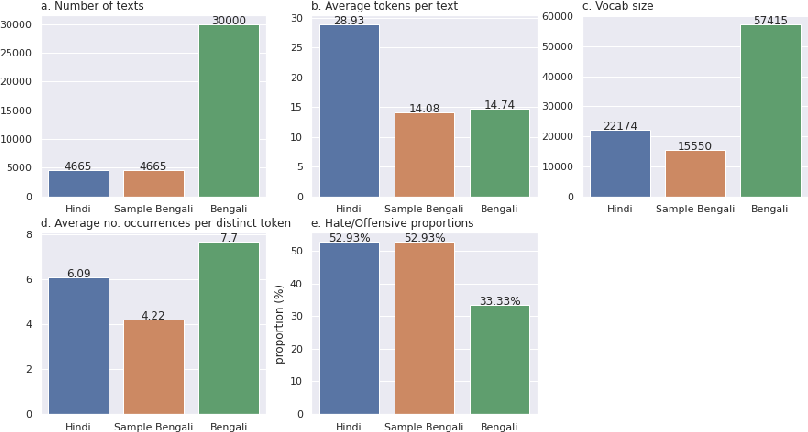 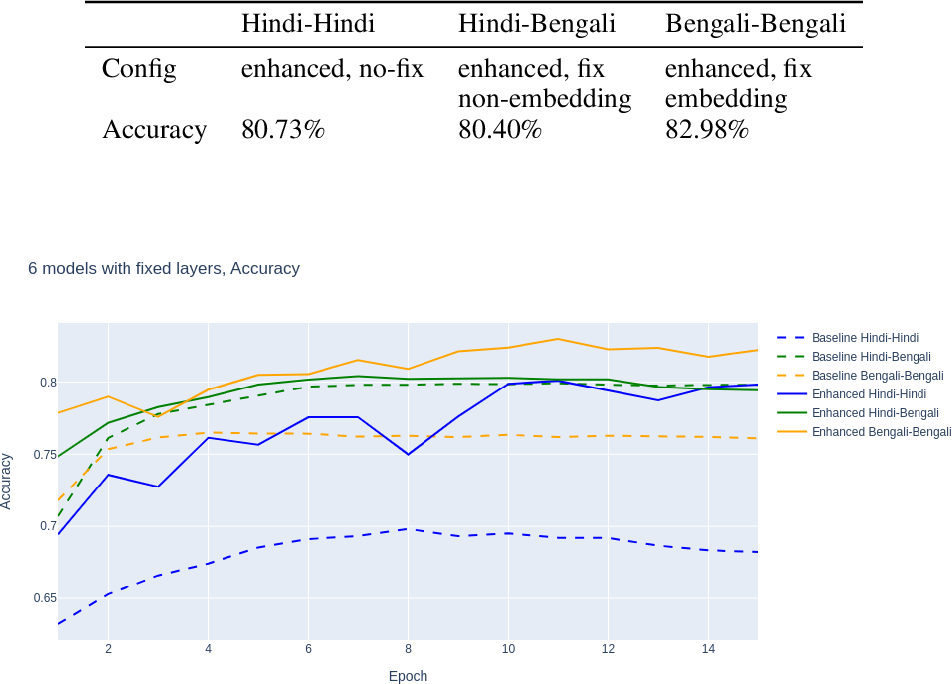 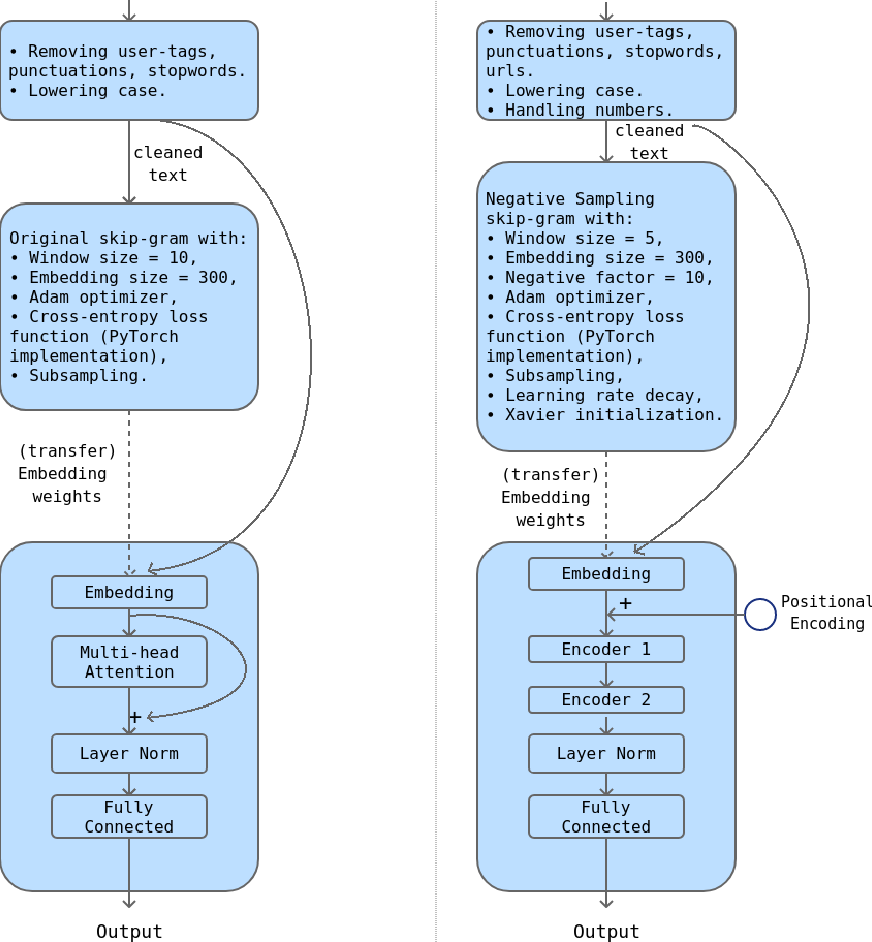 This work presents our approach to train a neural network to detect hate-speech texts in Hindi and Bengali. We also explore how transfer learning can be applied to learning these languages, given that they have the same origin and thus, are similar to some extend. Even though the whole experiment was conducted with low computational power, the obtained result is comparable to the results of other, more expensive, models. Furthermore, since the training data in use is relatively small and the two languages are almost entirely unknown to us, this work can be generalized as an effort to demystify lost or alien languages that no human is capable of understanding. 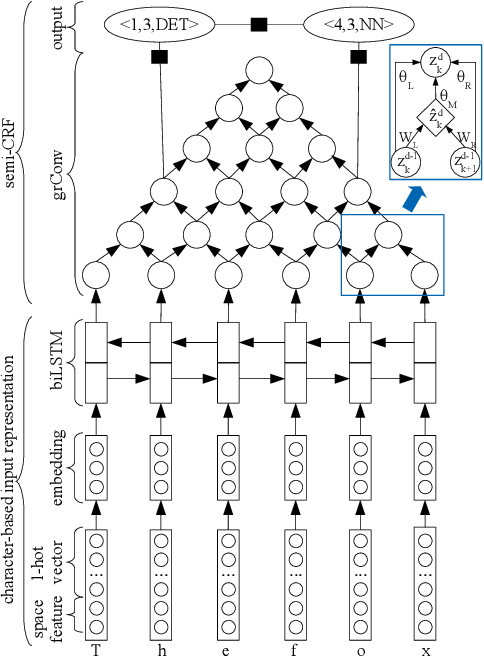 Character-level models of tokens have been shown to be effective at dealing with within-token noise and out-of-vocabulary words. But these models still rely on correct token boundaries. In this paper, we propose a novel end-to-end character-level model and demonstrate its effectiveness in multilingual settings and when token boundaries are noisy. Our model is a semi-Markov conditional random field with neural networks for character and segment representation. It requires no tokenizer. The model matches state-of-the-art baselines for various languages and significantly outperforms them on a noisy English version of a part-of-speech tagging benchmark dataset. 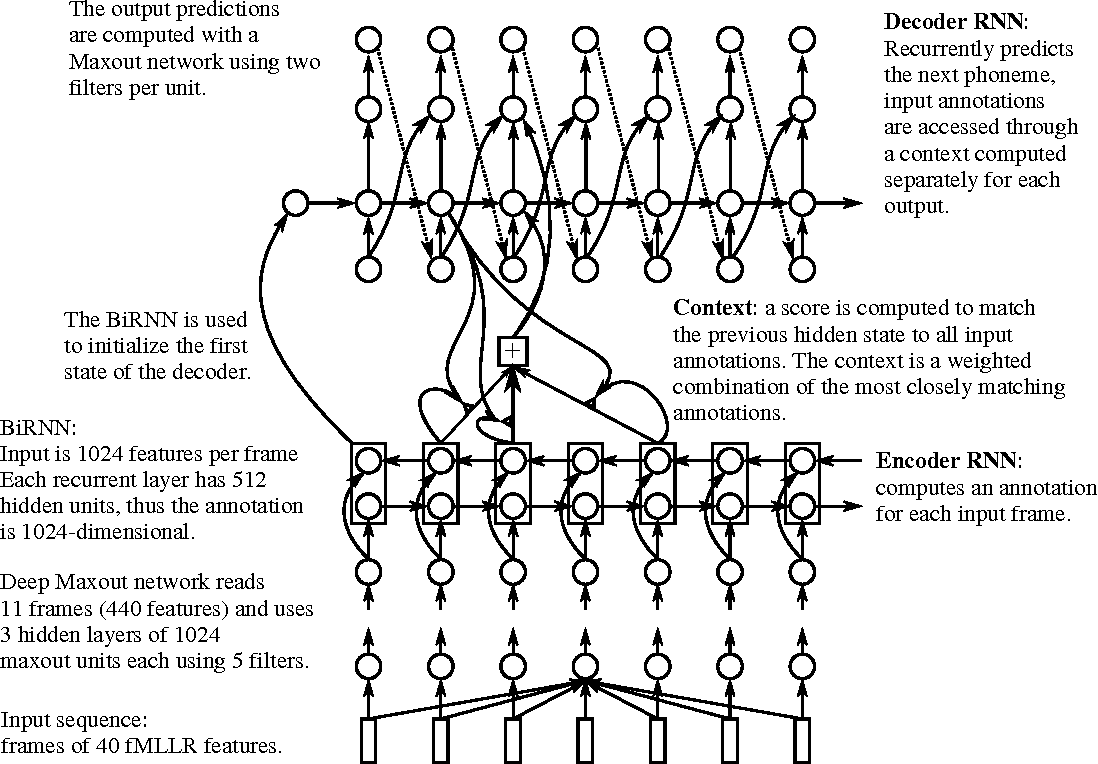 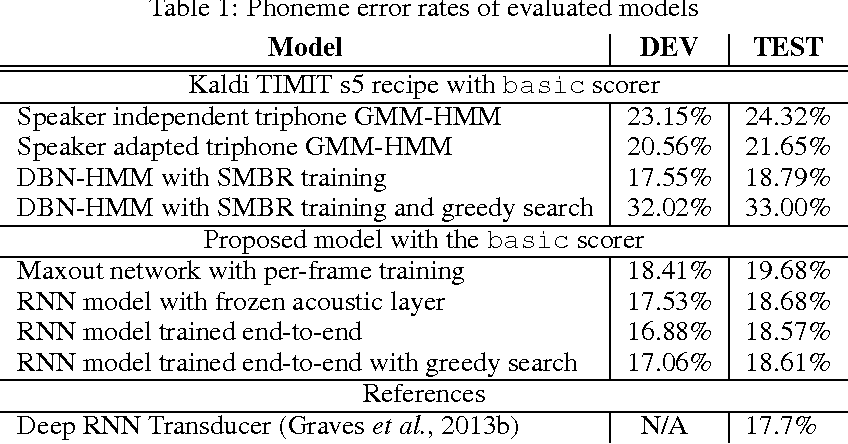 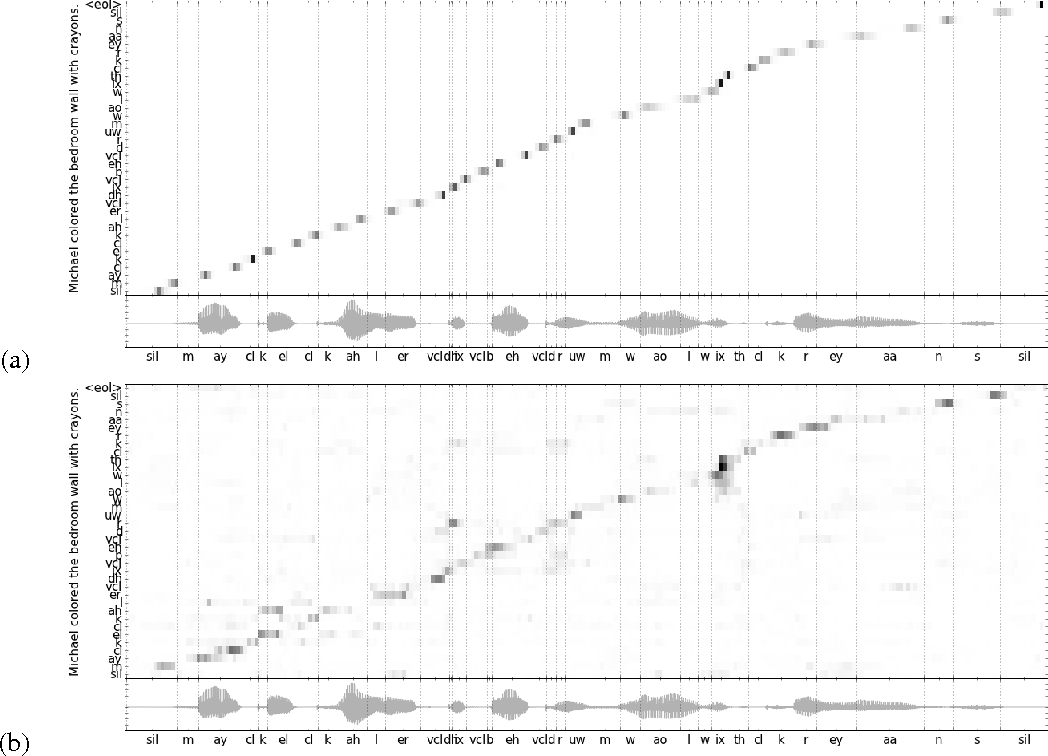 We replace the Hidden Markov Model (HMM) which is traditionally used in in continuous speech recognition with a bi-directional recurrent neural network encoder coupled to a recurrent neural network decoder that directly emits a stream of phonemes. The alignment between the input and output sequences is established using an attention mechanism: the decoder emits each symbol based on a context created with a subset of input symbols elected by the attention mechanism. We report initial results demonstrating that this new approach achieves phoneme error rates that are comparable to the state-of-the-art HMM-based decoders, on the TIMIT dataset.


* As accepted to: Deep Learning and Representation Learning Workshop, NIPS 2014 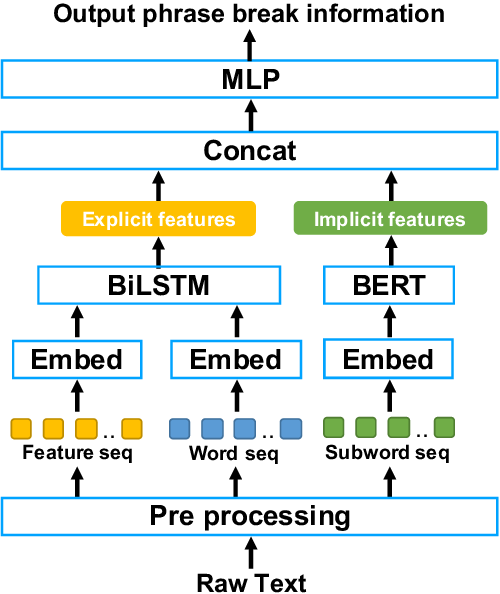 We propose a novel phrase break prediction method that combines implicit features extracted from a pre-trained large language model, a.k.a BERT, and explicit features extracted from BiLSTM with linguistic features. In conventional BiLSTM based methods, word representations and/or sentence representations are used as independent components. The proposed method takes account of both representations to extract the latent semantics, which cannot be captured by previous methods. The objective evaluation results show that the proposed method obtains an absolute improvement of 3.2 points for the F1 score compared with BiLSTM-based conventional methods using linguistic features. Moreover, the perceptual listening test results verify that a TTS system that applied our proposed method achieved a mean opinion score of 4.39 in prosody naturalness, which is highly competitive with the score of 4.37 for synthesized speech with ground-truth phrase breaks. 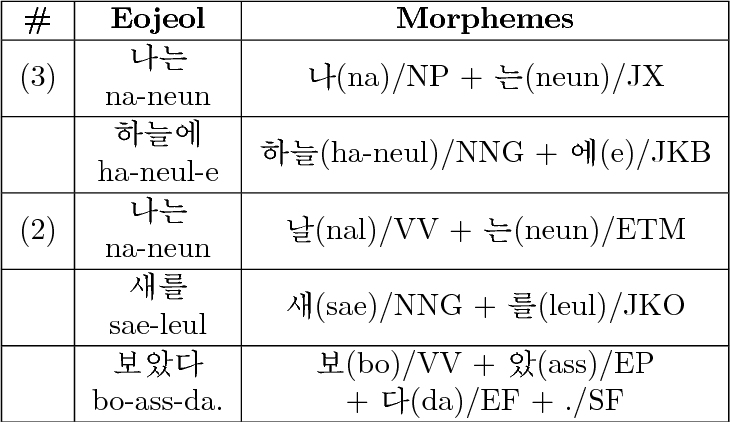 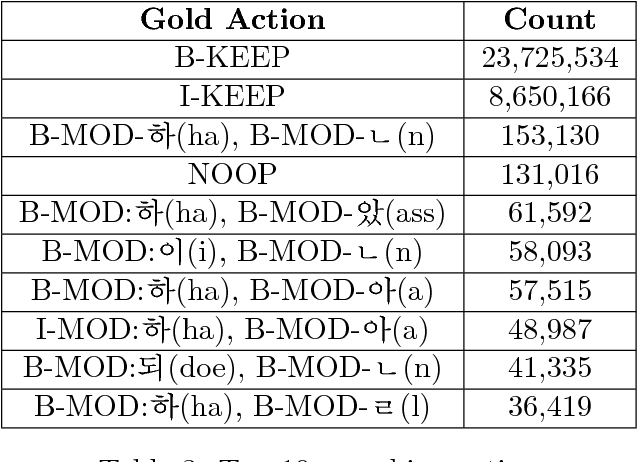 Due to the fact that Korean is a highly agglutinative, character-rich language, previous work on Korean morphological analysis typically employs the use of sub-character features known as graphemes or otherwise utilizes comprehensive prior linguistic knowledge (i.e., a dictionary of known morphological transformation forms, or actions). These models have been created with the assumption that character-level, dictionary-less morphological analysis was intractable due to the number of actions required. We present, in this study, a multi-stage action-based model that can perform morphological transformation and part-of-speech tagging using arbitrary units of input and apply it to the case of character-level Korean morphological analysis. Among models that do not employ prior linguistic knowledge, we achieve state-of-the-art word and sentence-level tagging accuracy with the Sejong Korean corpus using our proposed data-driven Bi-LSTM model.

Conventional statistics-based methods for joint Chinese word segmentation and part-of-speech tagging (S&T) have generalization ability to recognize new words that do not appear in the training data. An undesirable side effect is that a number of meaningless words will be incorrectly created. We propose an effective and efficient framework for S&T that introduces features to significantly reduce meaningless words generation. A general lexicon, Wikepedia and a large-scale raw corpus of 200 billion characters are used to generate word-based features for the wordhood. The word-lattice based framework consists of a character-based model and a word-based model in order to employ our word-based features. Experiments on Penn Chinese treebank 5 show that this method has a 62.9% reduction of meaningless word generation in comparison with the baseline. As a result, the F1 measure for segmentation is increased to 0.984.