We consider the problem of training speech recognition systems without using any labeled data, under the assumption that the learner can only access to the input utterances and a phoneme language model estimated from a non-overlapping corpus. We propose a fully unsupervised learning algorithm that alternates between solving two sub-problems: (i) learn a phoneme classifier for a given set of phoneme segmentation boundaries, and (ii) refining the phoneme boundaries based on a given classifier. To solve the first sub-problem, we introduce a novel unsupervised cost function named Segmental Empirical Output Distribution Matching, which generalizes the work in (Liu et al., 2017) to segmental structures. For the second sub-problem, we develop an approximate MAP approach to refining the boundaries obtained from Wang et al. (2017). Experimental results on TIMIT dataset demonstrate the success of this fully unsupervised phoneme recognition system, which achieves a phone error rate (PER) of 41.6%. Although it is still far away from the state-of-the-art supervised systems, we show that with oracle boundaries and matching language model, the PER could be improved to 32.5%.This performance approaches the supervised system of the same model architecture, demonstrating the great potential of the proposed method.


* Published as a conference paper at ICLR 2019 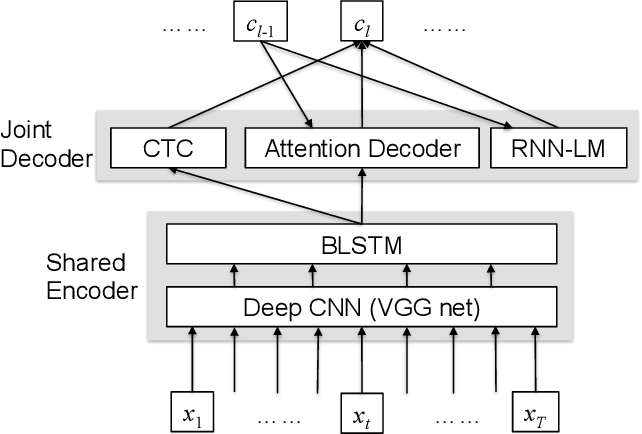 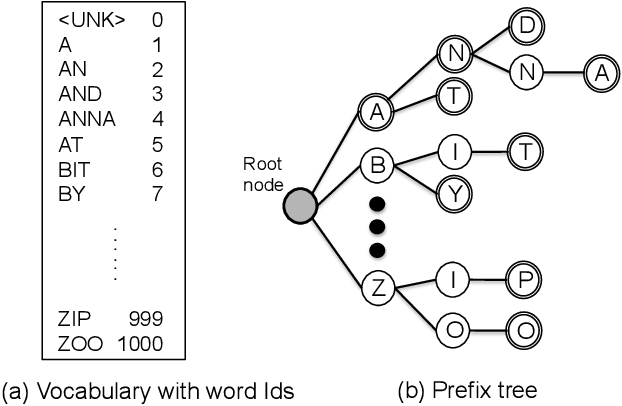 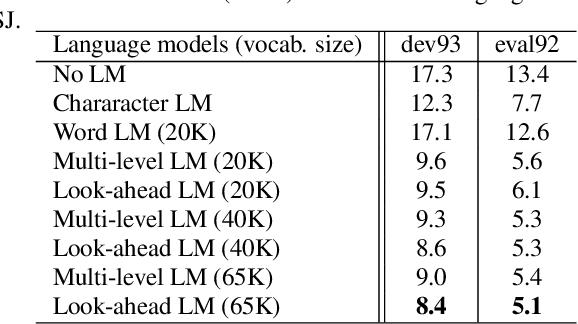 This paper investigates the impact of word-based RNN language models (RNN-LMs) on the performance of end-to-end automatic speech recognition (ASR). In our prior work, we have proposed a multi-level LM, in which character-based and word-based RNN-LMs are combined in hybrid CTC/attention-based ASR. Although this multi-level approach achieves significant error reduction in the Wall Street Journal (WSJ) task, two different LMs need to be trained and used for decoding, which increase the computational cost and memory usage. In this paper, we further propose a novel word-based RNN-LM, which allows us to decode with only the word-based LM, where it provides look-ahead word probabilities to predict next characters instead of the character-based LM, leading competitive accuracy with less computation compared to the multi-level LM. We demonstrate the efficacy of the word-based RNN-LMs using a larger corpus, LibriSpeech, in addition to WSJ we used in the prior work. Furthermore, we show that the proposed model achieves 5.1 %WER for WSJ Eval'92 test set when the vocabulary size is increased, which is the best WER reported for end-to-end ASR systems on this benchmark. 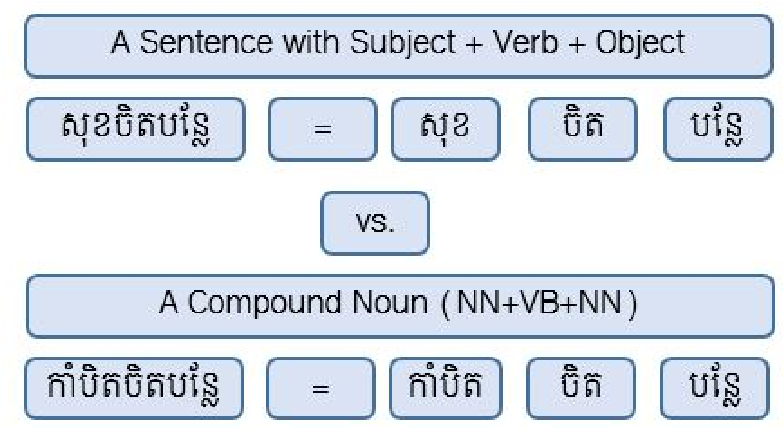 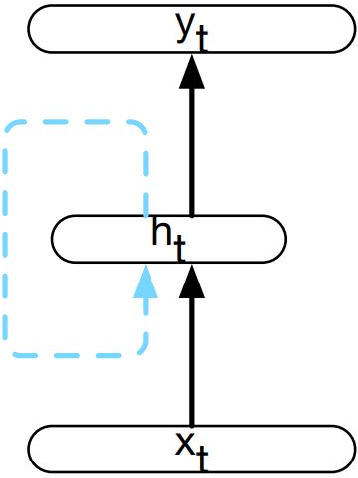 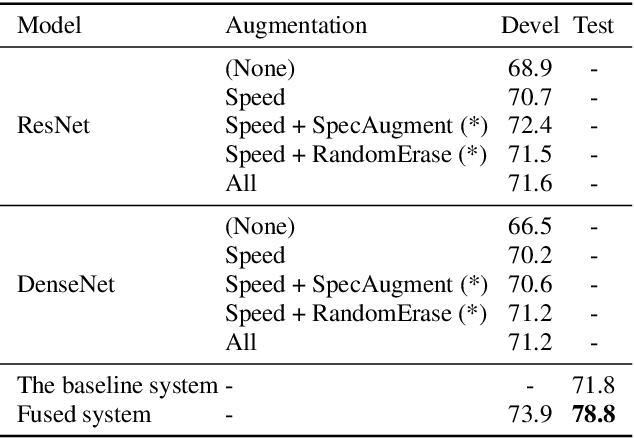 This paper introduces our approaches for the Mask and Breathing Sub-Challenge in the Interspeech COMPARE Challenge 2020. For the mask detection task, we train deep convolutional neural networks with filter-bank energies, gender-aware features, and speaker-aware features. Support Vector Machines follows as the back-end classifiers for binary prediction on the extracted deep embeddings. Several data augmentation schemes are used to increase the quantity of training data and improve our models' robustness, including speed perturbation, SpecAugment, and random erasing. For the speech breath monitoring task, we investigate different bottleneck features based on the Bi-LSTM structure. Experimental results show that our proposed methods outperform the baselines and achieve 0.746 PCC and 78.8% UAR on the Breathing and Mask evaluation set, respectively. 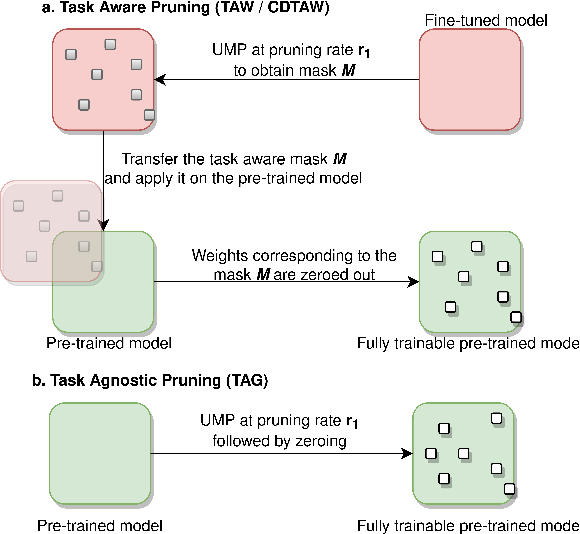 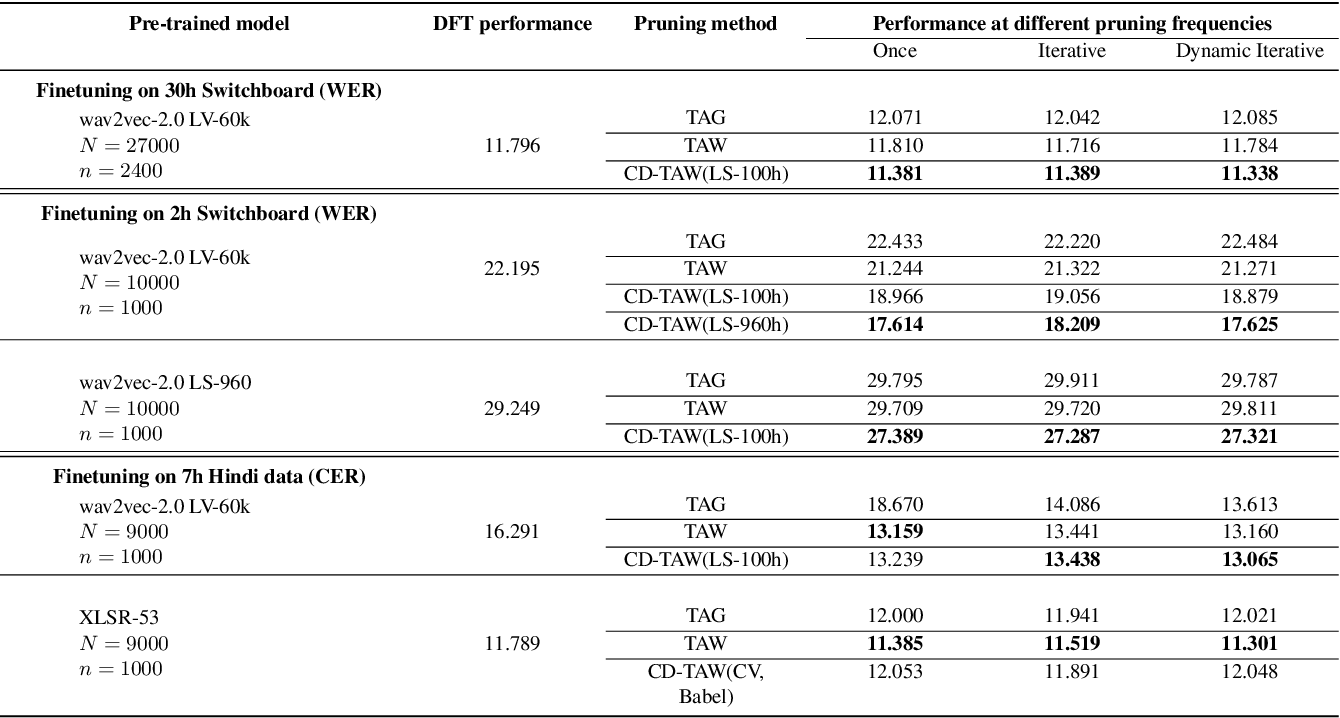 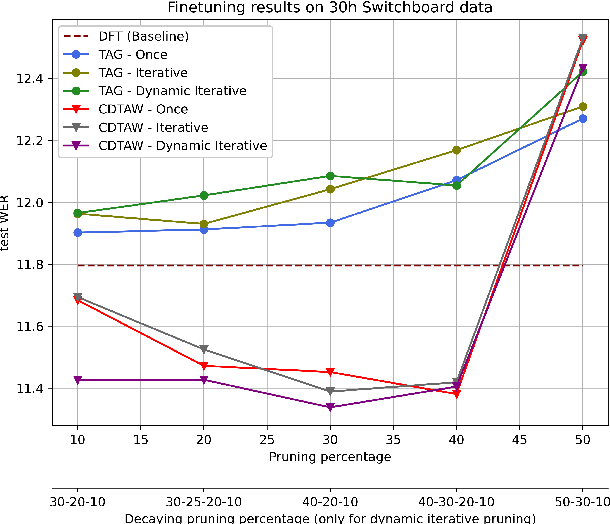 While self-supervised speech representation learning (SSL) models serve a variety of downstream tasks, these models have been observed to overfit to the domain from which the unlabelled data originates. To alleviate this issue, we propose PADA (Pruning Assisted Domain Adaptation) and zero out redundant weights from models pre-trained on large amounts of out-of-domain (OOD) data. Intuitively, this helps to make space for the target-domain ASR finetuning. The redundant weights can be identified through various pruning strategies which have been discussed in detail as a part of this work. Specifically, we investigate the effect of the recently discovered Task-Agnostic and Task-Aware pruning on PADA and propose a new pruning paradigm based on the latter, which we call Cross-Domain Task-Aware Pruning (CD-TAW). CD-TAW obtains the initial pruning mask from a well fine-tuned OOD model, which makes it starkly different from the rest of the pruning strategies discussed in the paper. Our proposed CD-TAW methodology achieves up to 20.6% relative WER improvement over our baseline when fine-tuned on a 2-hour subset of Switchboard data without language model (LM) decoding. Furthermore, we conduct a detailed analysis to highlight the key design choices of our proposed method.

Existing multi-channel continuous speech separation (CSS) models are heavily dependent on supervised data - either simulated data which causes data mismatch between the training and real-data testing, or the real transcribed overlapping data, which is difficult to be acquired, hindering further improvements in the conversational/meeting transcription tasks. In this paper, we propose a three-stage training scheme for the CSS model that can leverage both supervised data and extra large-scale unsupervised real-world conversational data. The scheme consists of two conventional training approaches -- pre-training using simulated data and ASR-loss-based training using transcribed data -- and a novel continuous semi-supervised training between the two, in which the CSS model is further trained by using real data based on the teacher-student learning framework. We apply this scheme to an array-geometry-agnostic CSS model, which can use the multi-channel data collected from any microphone array. Large-scale meeting transcription experiments are carried out on both Microsoft internal meeting data and the AMI meeting corpus. The steady improvement by each training stage has been observed, showing the effect of the proposed method that enables leveraging real conversational data for CSS model training. 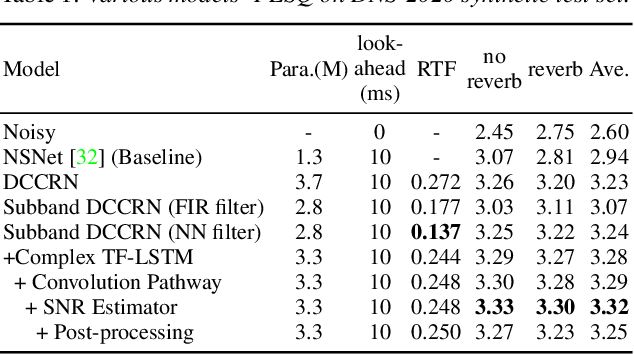 Deep complex convolution recurrent network (DCCRN), which extends CRN with complex structure, has achieved superior performance in MOS evaluation in Interspeech 2020 deep noise suppression challenge (DNS2020). This paper further extends DCCRN with the following significant revisions. We first extend the model to sub-band processing where the bands are split and merged by learnable neural network filters instead of engineered FIR filters, leading to a faster noise suppressor trained in an end-to-end manner. Then the LSTM is further substituted with a complex TF-LSTM to better model temporal dependencies along both time and frequency axes. Moreover, instead of simply concatenating the output of each encoder layer to the input of the corresponding decoder layer, we use convolution blocks to first aggregate essential information from the encoder output before feeding it to the decoder layers. We specifically formulate the decoder with an extra a priori SNR estimation module to maintain good speech quality while removing noise. Finally a post-processing module is adopted to further suppress the unnatural residual noise. The new model, named DCCRN+, has surpassed the original DCCRN as well as several competitive models in terms of PESQ and DNSMOS, and has achieved superior performance in the new Interspeech 2021 DNS challenge 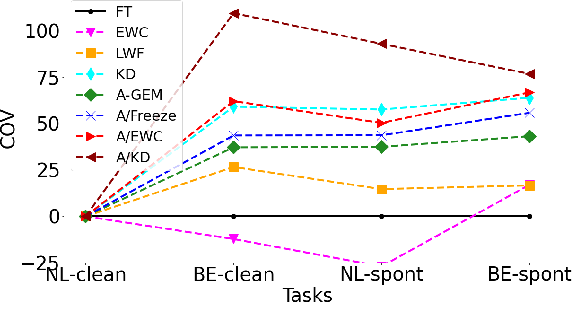 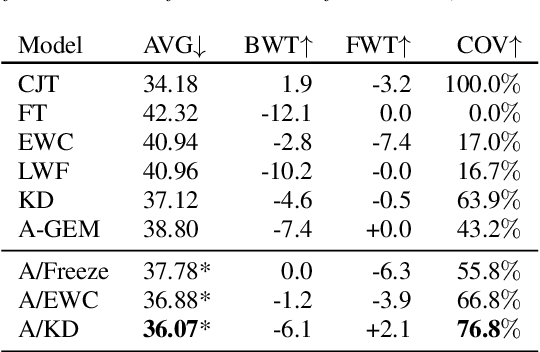 Learning a set of tasks in sequence remains a challenge for Artificial Neural Networks, which, in such scenarios, tend to suffer from Catastrophic Forgetting (CF). The same applies to End-to-End (E2E) Automatic Speech Recognition (ASR) models, even for monolingual tasks. In this paper, we aim to overcome CF for E2E ASR by inserting adapters, small architectures of few parameters which allow a general model to be fine-tuned to a specific task, into our model. We make these adapters task-specific, while either freezing or regularizing the parameters of the model shared by all tasks, thus stimulating the model to fully exploit the adapter parameters while keeping the shared parameters such that they work well for all tasks. Our best method is able to close the gap between worst case (naively fine-tuning) and best case (jointly training on all tasks) by more than 75% after a set of four monolingual tasks. 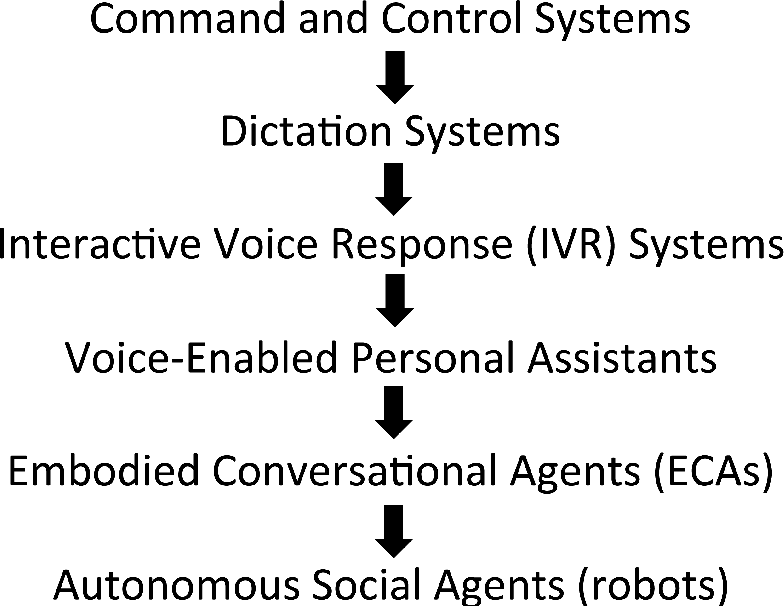 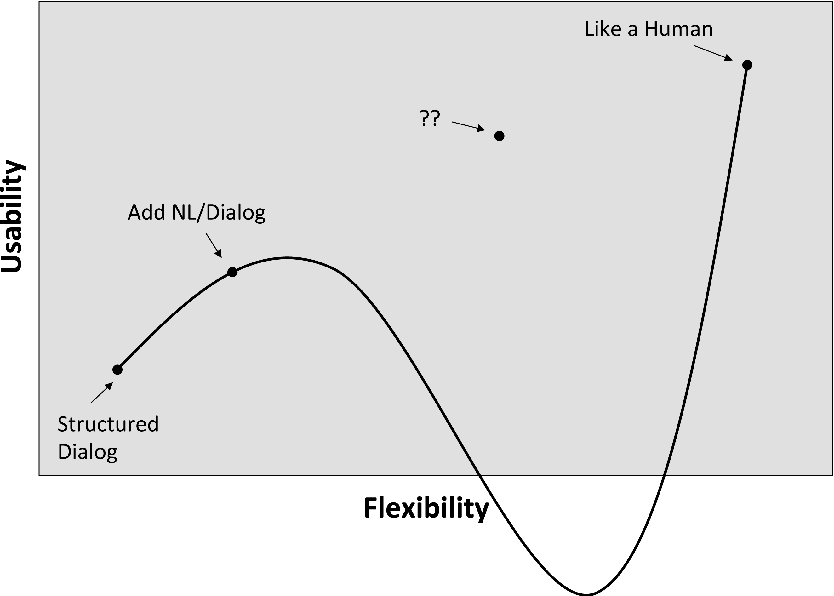 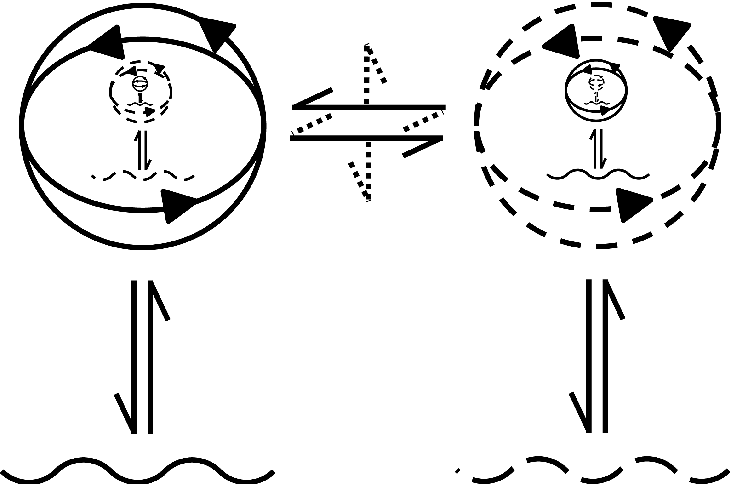 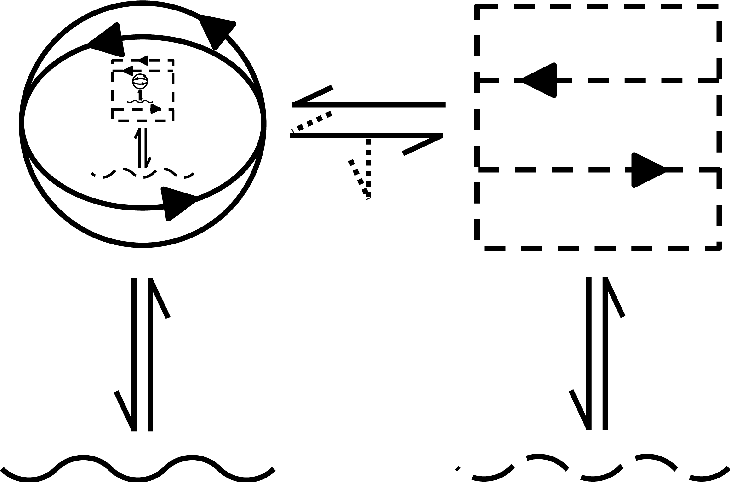 Recent years have seen significant market penetration for voice-based personal assistants such as Apple's Siri. However, despite this success, user take-up is frustratingly low. This position paper argues that there is a habitability gap caused by the inevitable mismatch between the capabilities and expectations of human users and the features and benefits provided by contemporary technology. Suggestions are made as to how such problems might be mitigated, but a more worrisome question emerges: "is spoken language all-or-nothing"? The answer, based on contemporary views on the special nature of (spoken) language, is that there may indeed be a fundamental limit to the interaction that can take place between mismatched interlocutors (such as humans and machines). However, it is concluded that interactions between native and non-native speakers, or between adults and children, or even between humans and dogs, might provide critical inspiration for the design of future speech-based human-machine interaction.