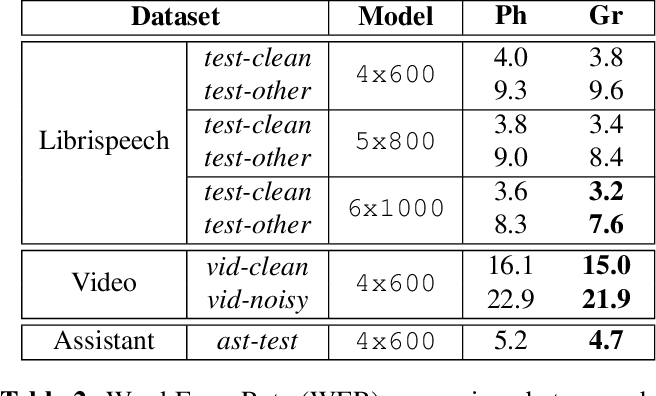 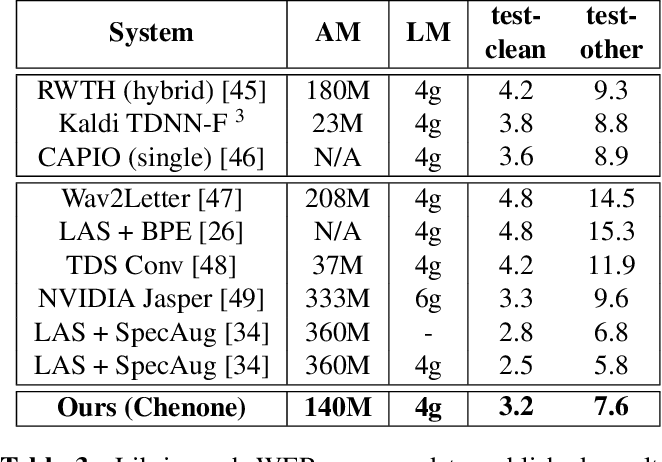 There is an implicit assumption that traditional hybrid approaches for automatic speech recognition (ASR) cannot directly model graphemes and need to rely on phonetic lexicons to get competitive performance, especially on English which has poor grapheme-phoneme correspondence. In this work, we show for the first time that, on English, hybrid ASR systems can in fact model graphemes effectively by leveraging tied context-dependent graphemes, i.e., chenones. Our chenone-based systems significantly outperform equivalent senone baselines by 4.5% to 11.1% relative on three different English datasets. Our results on Librispeech are state-of-the-art compared to other hybrid approaches and competitive with previously published end-to-end numbers. Further analysis shows that chenones can better utilize powerful acoustic models and large training data, and require context- and position-dependent modeling to work well. Chenone-based systems also outperform senone baselines on proper noun and rare word recognition, an area where the latter is traditionally thought to have an advantage. Our work provides an alternative for end-to-end ASR and establishes that hybrid systems can be improved by dropping the reliance on phonetic knowledge. 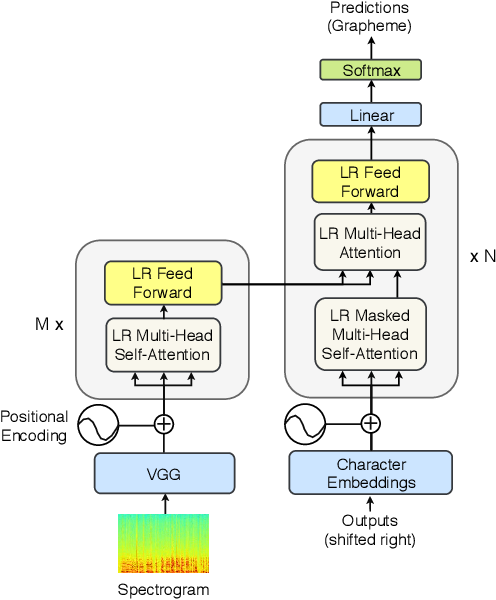 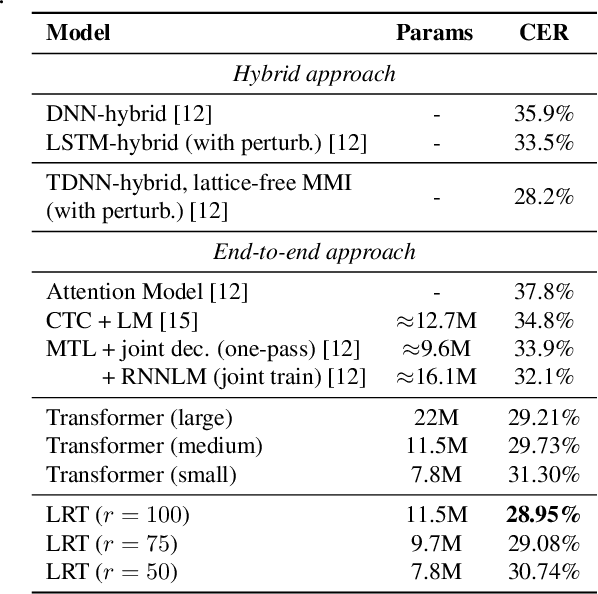 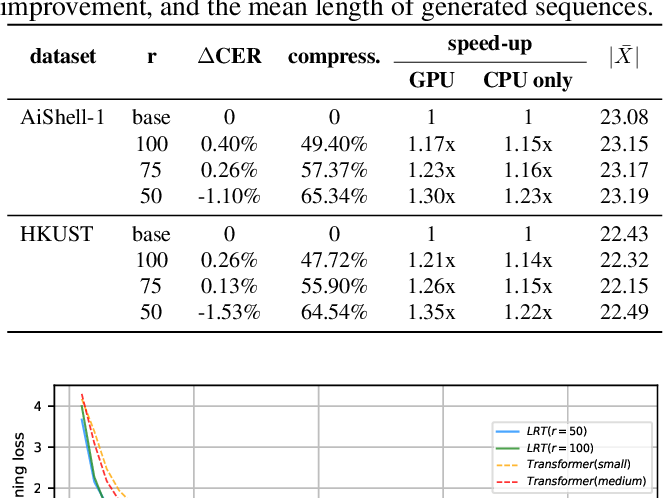 High performing deep neural networks come at the cost of computational complexity that limits its practicality for deployment on portable devices. We propose Low-Rank Transformer (LRT), a memory-efficient and fast neural architecture that significantly reduces the parameters and boosts the speed in training and inference for end-to-end speech recognition. Our approach reduces the number of parameters of the network by more than 50% parameters and speed-up the inference time by around 1.26x compared to the baseline transformer model. The experiments show that LRT models generalize better and yield lower error rates on both validation and test sets compared to the uncompressed transformer model. LRT models outperform existing works on several datasets in an end-to-end setting without using any external language model and acoustic data. 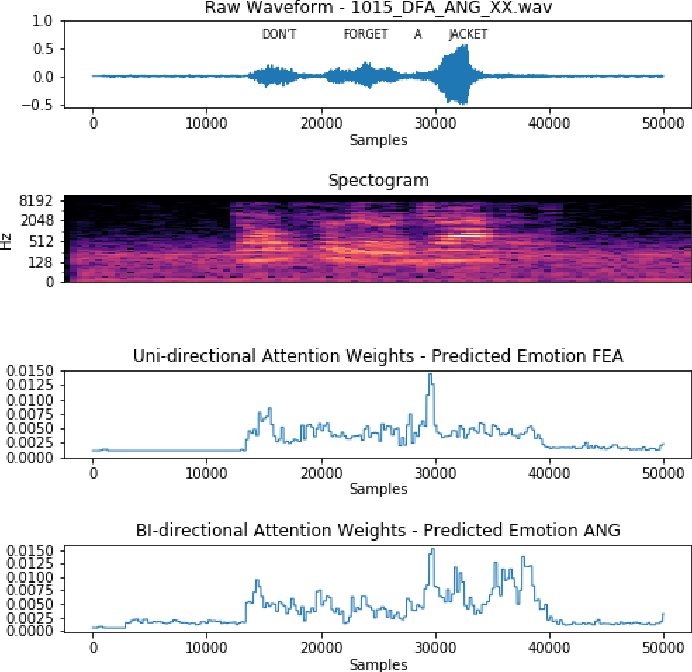 Automatic emotion recognition for real-life appli-cations is a challenging task. Human emotion expressions aresubtle, and can be conveyed by a combination of several emo-tions. In most existing emotion recognition studies, each audioutterance/video clip is labelled/classified in its entirety. However,utterance/clip-level labelling and classification can be too coarseto capture the subtle intra-utterance/clip temporal dynamics. Forexample, an utterance/video clip usually contains only a fewemotion-salient regions and many emotionless regions. In thisstudy, we propose to use attention mechanism in deep recurrentneural networks to detection the Regions-of-Interest (ROI) thatare more emotionally salient in human emotional speech/video,and further estimate the temporal emotion dynamics by aggre-gating those emotionally salient regions-of-interest. We comparethe ROI from audio and video and analyse them. We comparethe performance of the proposed attention networks with thestate-of-the-art LSTM models on multi-class classification task ofrecognizing six basic human emotions, and the proposed attentionmodels exhibit significantly better performance. Furthermore, theattention weight distribution can be used to interpret how anutterance can be expressed as a mixture of possible emotions.

ASVspoof 2019: spoofing countermeasures for the detection of synthesized, converted and replayed speech 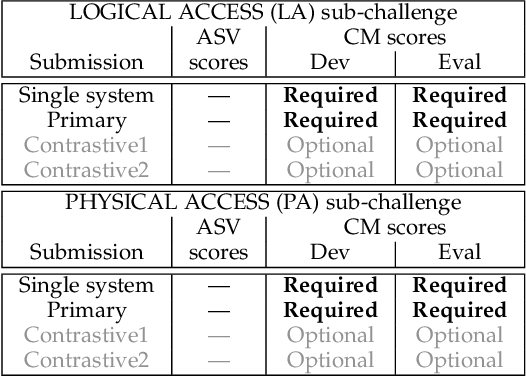 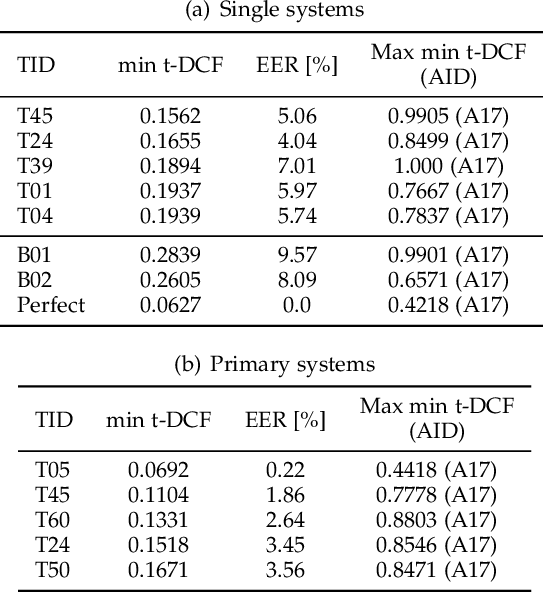 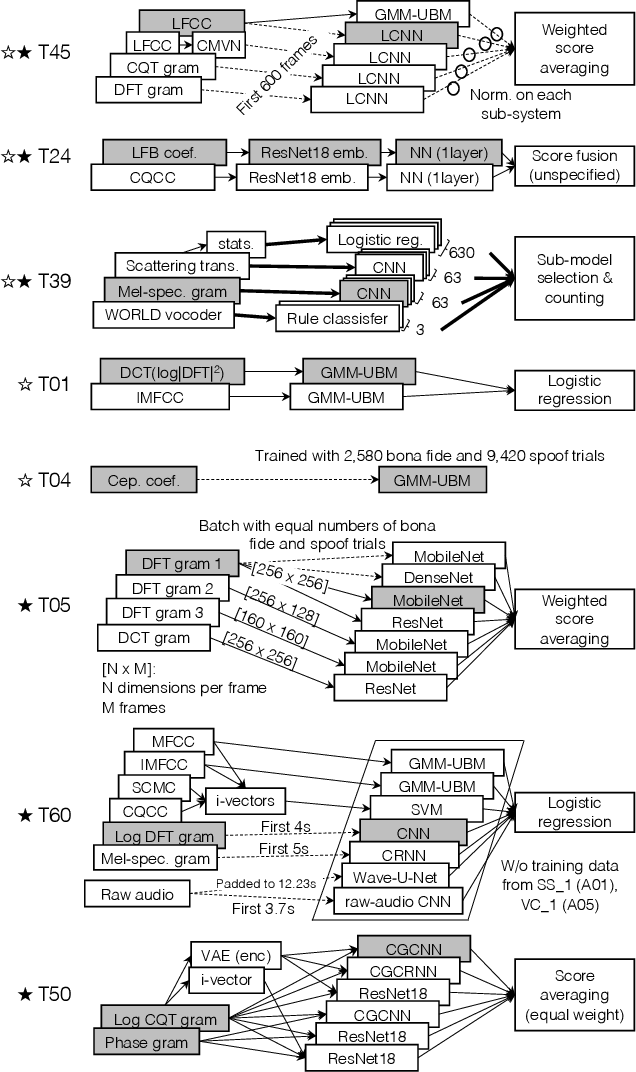 The ASVspoof initiative was conceived to spearhead research in anti-spoofing for automatic speaker verification (ASV). This paper describes the third in a series of bi-annual challenges: ASVspoof 2019. With the challenge database and protocols being described elsewhere, the focus of this paper is on results and the top performing single and ensemble system submissions from 62 teams, all of which out-perform the two baseline systems, often by a substantial margin. Deeper analyses shows that performance is dominated by specific conditions involving either specific spoofing attacks or specific acoustic environments. While fusion is shown to be particularly effective for the logical access scenario involving speech synthesis and voice conversion attacks, participants largely struggled to apply fusion successfully for the physical access scenario involving simulated replay attacks. This is likely the result of a lack of system complementarity, while oracle fusion experiments show clear potential to improve performance. Furthermore, while results for simulated data are promising, experiments with real replay data show a substantial gap, most likely due to the presence of additive noise in the latter. This finding, among others, leads to a number of ideas for further research and directions for future editions of the ASVspoof challenge.

To the best of our knowledge, we first present a live system that generates personalized photorealistic talking-head animation only driven by audio signals at over 30 fps. Our system contains three stages. The first stage is a deep neural network that extracts deep audio features along with a manifold projection to project the features to the target person's speech space. In the second stage, we learn facial dynamics and motions from the projected audio features. The predicted motions include head poses and upper body motions, where the former is generated by an autoregressive probabilistic model which models the head pose distribution of the target person. Upper body motions are deduced from head poses. In the final stage, we generate conditional feature maps from previous predictions and send them with a candidate image set to an image-to-image translation network to synthesize photorealistic renderings. Our method generalizes well to wild audio and successfully synthesizes high-fidelity personalized facial details, e.g., wrinkles, teeth. Our method also allows explicit control of head poses. Extensive qualitative and quantitative evaluations, along with user studies, demonstrate the superiority of our method over state-of-the-art techniques. 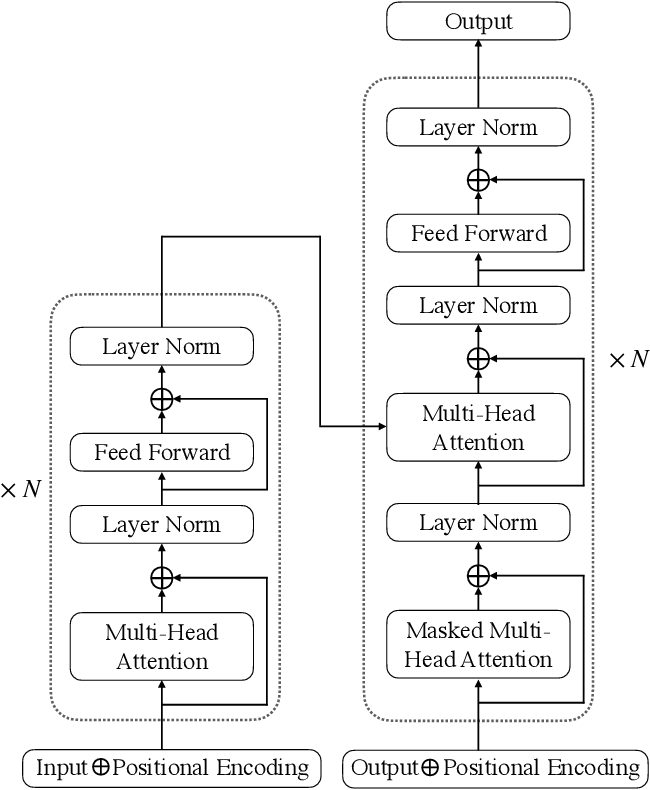 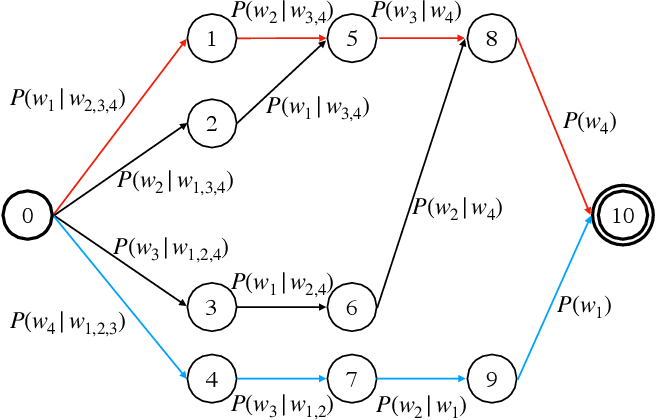 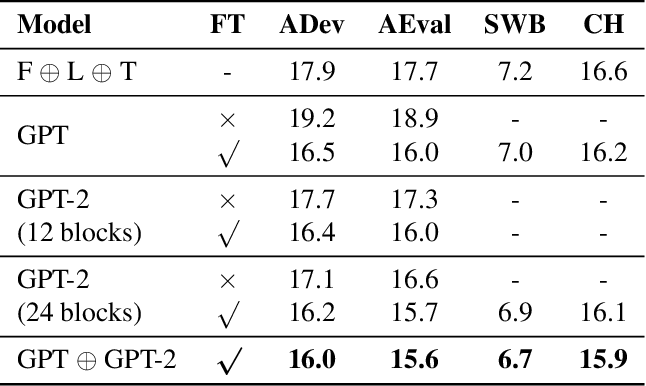 Language models (LMs) pre-trained on massive amounts of text, in particular bidirectional encoder representations from Transformers (BERT), generative pre-training (GPT), and GPT-2, have become a key technology for many natural language processing tasks. In this paper, we present results using fine-tuned GPT, GPT-2, and their combination for automatic speech recognition (ASR). Unlike unidirectional LM GPT and GPT-2, BERT is bidirectional whose direct product of the output probabilities is no longer a valid language prior probability. A conversion method is proposed to compute the correct language prior probability based on bidirectional LM outputs in a mathematically exact way. Experimental results on the widely used AMI and Switchboard ASR tasks showed that the combination of the fine-tuned GPT and GPT-2 outperformed the combination of three neural LMs with different architectures trained from scratch on the in-domain text by up to a 12% relative word error rate reduction (WERR). Furthermore, the proposed conversion for language prior probabilities enables BERT to receive an extra 3% relative WERR, and the combination of BERT, GPT and GPT-2 results in further improvements. 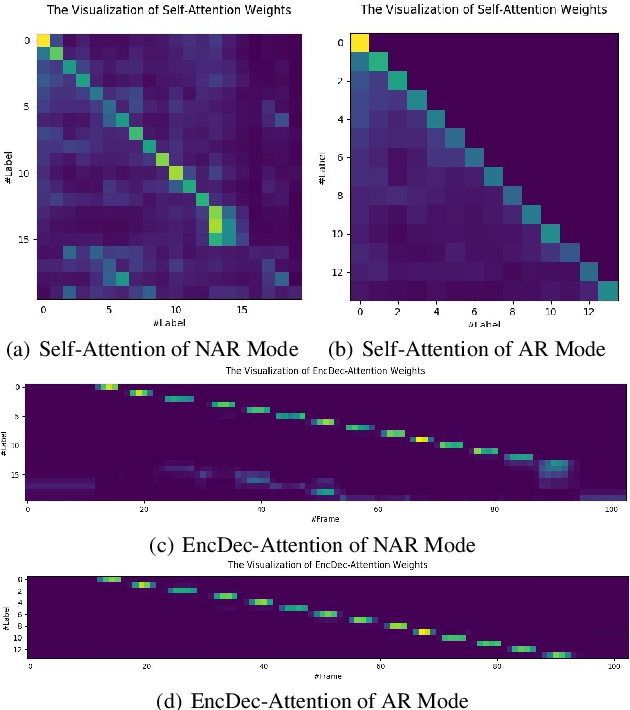 The autoregressive (AR) models, such as attention-based encoder-decoder models and RNN-Transducer, have achieved great success in speech recognition. They predict the output sequence conditioned on the previous tokens and acoustic encoded states, which is inefficient on GPUs. The non-autoregressive (NAR) models can get rid of the temporal dependency between the output tokens and predict the entire output tokens in at least one step. However, the NAR model still faces two major problems. On the one hand, there is still a great gap in performance between the NAR models and the advanced AR models. On the other hand, it's difficult for most of the NAR models to train and converge. To address these two problems, we propose a new model named the two-step non-autoregressive transformer(TSNAT), which improves the performance and accelerating the convergence of the NAR model by learning prior knowledge from a parameters-sharing AR model. Furthermore, we introduce the two-stage method into the inference process, which improves the model performance greatly. All the experiments are conducted on a public Chinese mandarin dataset ASIEHLL-1. The results show that the TSNAT can achieve a competitive performance with the AR model and outperform many complicated NAR models.

End-to-end (E2E) models have achieved promising results on multiple speech recognition benchmarks, and shown the potential to become the mainstream. However, the unified structure and the E2E training hamper injecting contextual information into them for contextual biasing. Though contextual LAS (CLAS) gives an excellent all-neural solution, the degree of biasing to given context information is not explicitly controllable. In this paper, we focus on incorporating context information into the continuous integrate-and-fire (CIF) based model that supports contextual biasing in a more controllable fashion. Specifically, an extra context processing network is introduced to extract contextual embeddings, integrate acoustically relevant context information and decode the contextual output distribution, thus forming a collaborative decoding with the decoder of the CIF-based model. Evaluated on the named entity rich evaluation sets of HKUST/AISHELL-2, our method brings relative character error rate (CER) reduction of 8.83%/21.13% and relative named entity character error rate (NE-CER) reduction of 40.14%/51.50% when compared with a strong baseline. Besides, it keeps the performance on original evaluation set without degradation. 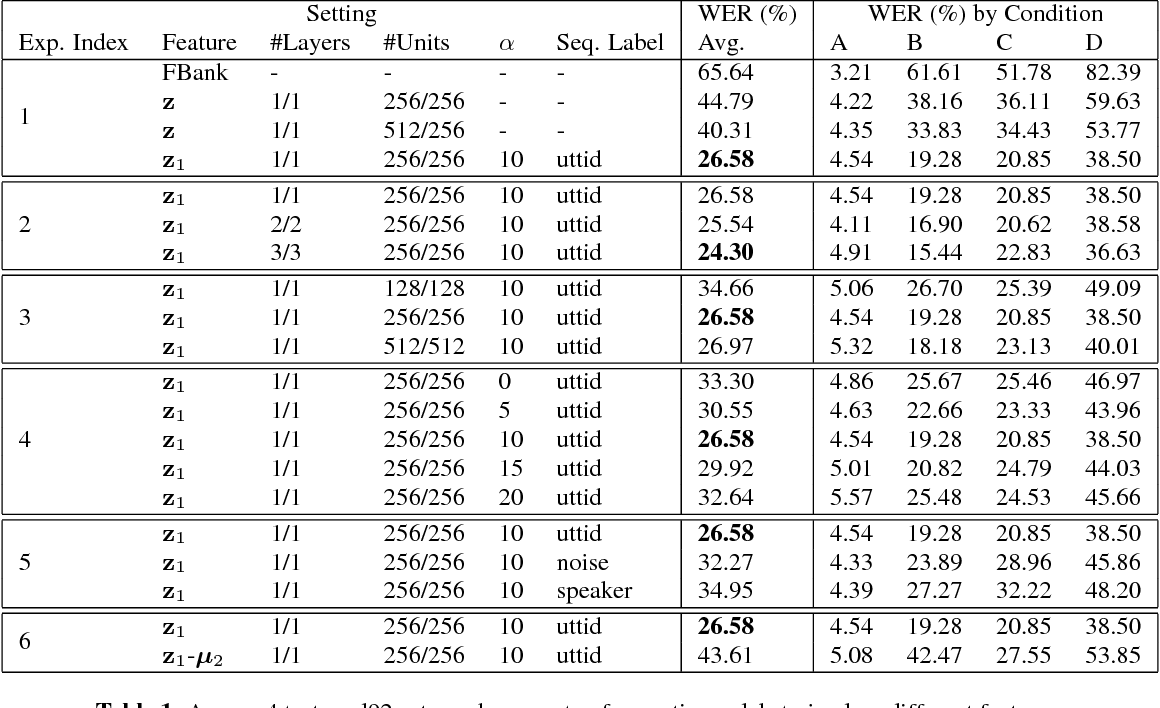 The performance of automatic speech recognition (ASR) systems can be significantly compromised by previously unseen conditions, which is typically due to a mismatch between training and testing distributions. In this paper, we address robustness by studying domain invariant features, such that domain information becomes transparent to ASR systems, resolving the mismatch problem. Specifically, we investigate a recent model, called the Factorized Hierarchical Variational Autoencoder (FHVAE). FHVAEs learn to factorize sequence-level and segment-level attributes into different latent variables without supervision. We argue that the set of latent variables that contain segment-level information is our desired domain invariant feature for ASR. Experiments are conducted on Aurora-4 and CHiME-4, which demonstrate 41% and 27% absolute word error rate reductions respectively on mismatched domains. 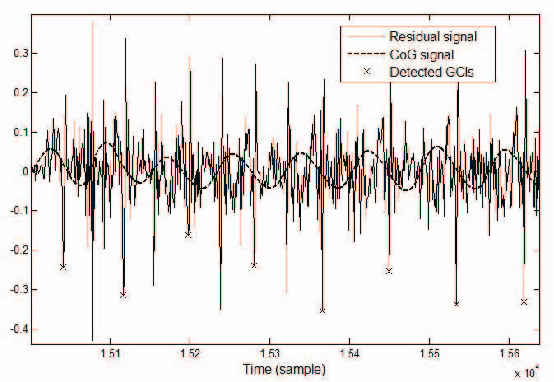 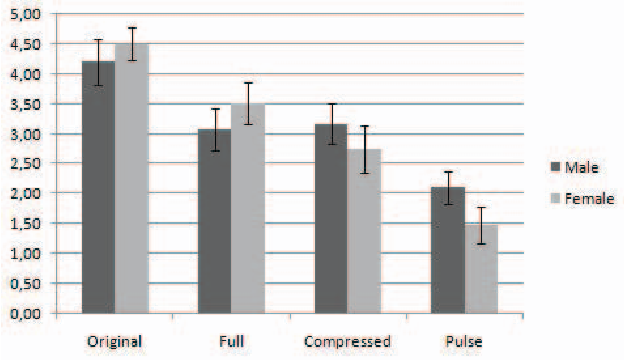 This paper proposes a method to improve the quality delivered by statistical parametric speech synthesizers. For this, we use a codebook of pitch-synchronous residual frames, so as to construct a more realistic source signal. First a limited codebook of typical excitations is built from some training database. During the synthesis part, HMMs are used to generate filter and source coefficients. The latter coefficients contain both the pitch and a compact representation of target residual frames. The source signal is obtained by concatenating excitation frames picked up from the codebook, based on a selection criterion and taking target residual coefficients as input. Subjective results show a relevant improvement compared to the basic technique.