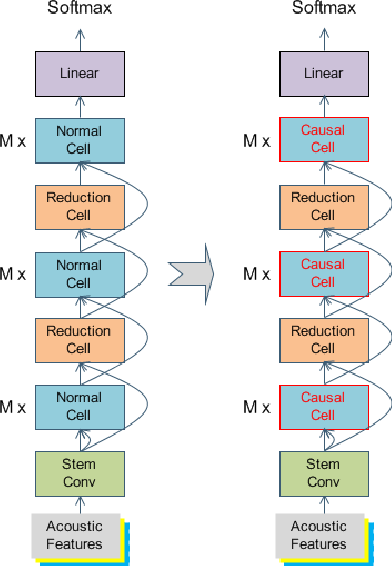 Recently, neural architecture search (NAS) has attracted much attention and has been explored for automatic speech recognition (ASR). Our prior work has shown promising results compared with hand-designed neural networks. In this work, we focus on streaming ASR scenarios and propose the latency-controlled NAS for acoustic modeling. First, based on the vanilla neural architecture, normal cells are altered to be causal cells, in order to control the total latency of the neural network. Second, a revised operation space with a smaller receptive field is proposed to generate the final architecture with low latency. Extensive experiments show that: 1) Based on the proposed neural architecture, the neural networks with a medium latency of 550ms (millisecond) and a low latency of 190ms can be learned in the vanilla and revised operation space respectively. 2) For the low latency setting, the evaluation network can achieve more than 19\% (average on the four test sets) relative improvements compared with the hybrid CLDNN baseline, on a 10k-hour large-scale dataset. Additional 11\% relative improvements can be achieved if the latency of the neural network is relaxed to the medium latency setting.

In recent years, end-to-end models have become popular for application in automatic speech recognition. Compared to hybrid approaches, which perform the phone-sequence to word conversion based on a lexicon, an end-to-end system models text directly, usually as a sequence of characters or sub-word features. We propose a sub-word modeling method that leverages the pronunciation information of a word. Experiments show that the proposed method can greatly improve upon the character-based baseline, and also outperform commonly used byte-pair encoding methods. 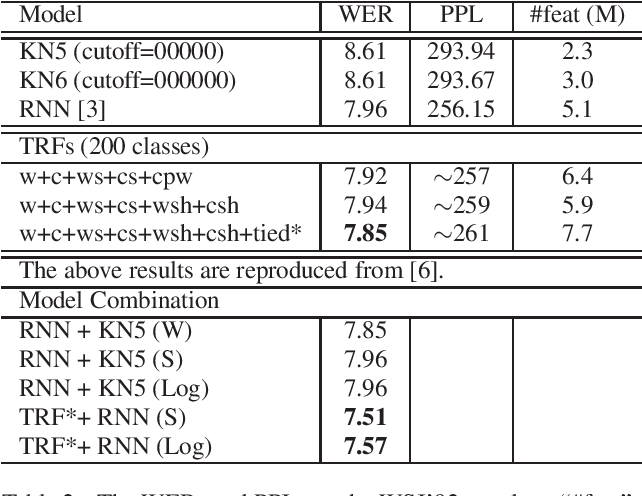 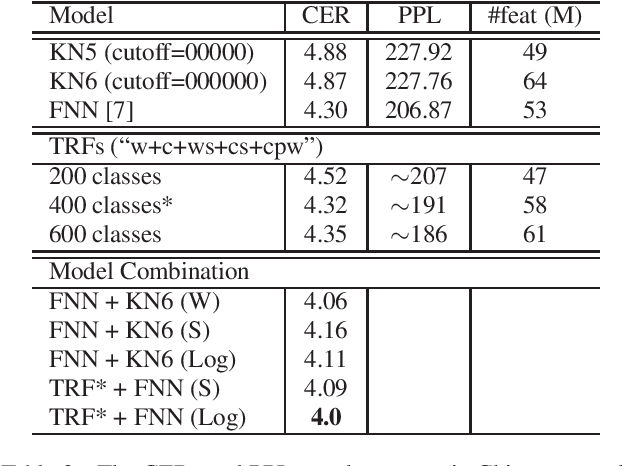 The dominant language models (LMs) such as n-gram and neural network (NN) models represent sentence probabilities in terms of conditionals. In contrast, a new trans-dimensional random field (TRF) LM has been recently introduced to show superior performances, where the whole sentence is modeled as a random field. In this paper, we examine how the TRF models can be interpolated with the NN models, and obtain 12.1\% and 17.9\% relative error rate reductions over 6-gram LMs for English and Chinese speech recognition respectively through log-linear combination.


* three pages, 2 experiment result tables, reporting the WERs on an Englisth dateset and a Chinese dataset 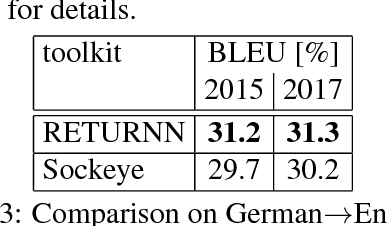 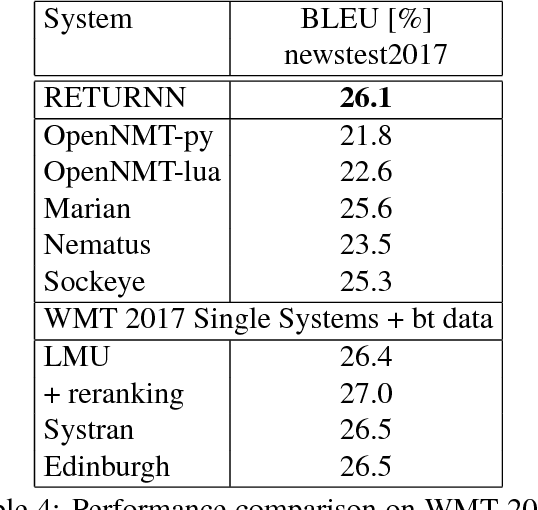 We compare the fast training and decoding speed of RETURNN of attention models for translation, due to fast CUDA LSTM kernels, and a fast pure TensorFlow beam search decoder. We show that a layer-wise pretraining scheme for recurrent attention models gives over 1% BLEU improvement absolute and it allows to train deeper recurrent encoder networks. Promising preliminary results on max. expected BLEU training are presented. We are able to train state-of-the-art models for translation and end-to-end models for speech recognition and show results on WMT 2017 and Switchboard. The flexibility of RETURNN allows a fast research feedback loop to experiment with alternative architectures, and its generality allows to use it on a wide range of applications. 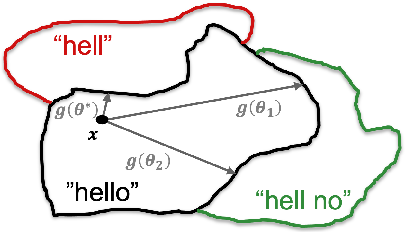 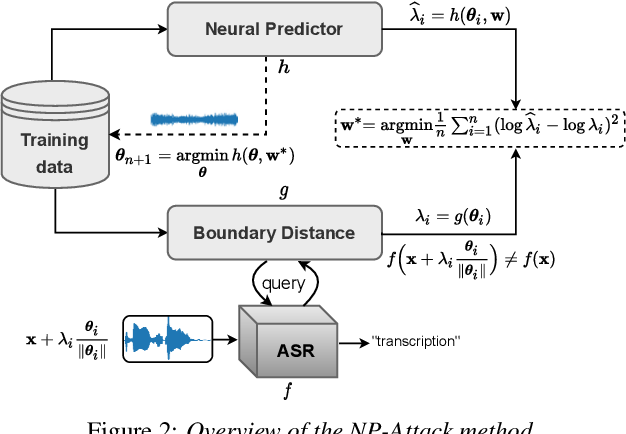 Recent works have revealed the vulnerability of automatic speech recognition (ASR) models to adversarial examples (AEs), i.e., small perturbations that cause an error in the transcription of the audio signal. Studying audio adversarial attacks is therefore the first step towards robust ASR. Despite the significant progress made in attacking audio examples, the black-box attack remains challenging because only the hard-label information of transcriptions is provided. Due to this limited information, existing black-box methods often require an excessive number of queries to attack a single audio example. In this paper, we introduce NP-Attack, a neural predictor-based method, which progressively evolves the search towards a small adversarial perturbation. Given a perturbation direction, our neural predictor directly estimates the smallest perturbation that causes a mistranscription. In particular, it enables NP-Attack to accurately learn promising perturbation directions via gradient-based optimization. Experimental results show that NP-Attack achieves competitive results with other state-of-the-art black-box adversarial attacks while requiring a significantly smaller number of queries. The code of NP-Attack is available online. 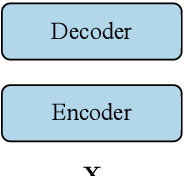 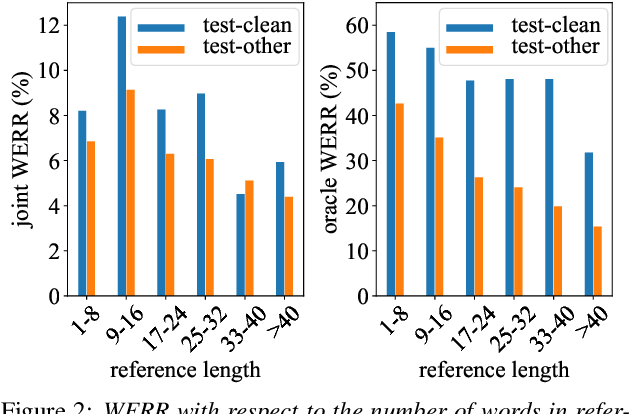 End-to-end models with auto-regressive decoders have shown impressive results for automatic speech recognition (ASR). These models formulate the sequence-level probability as a product of the conditional probabilities of all individual tokens given their histories. However, the performance of locally normalised models can be sub-optimal because of factors such as exposure bias. Consequently, the model distribution differs from the underlying data distribution. In this paper, the residual energy-based model (R-EBM) is proposed to complement the auto-regressive ASR model to close the gap between the two distributions. Meanwhile, R-EBMs can also be regarded as utterance-level confidence estimators, which may benefit many downstream tasks. Experiments on a 100hr LibriSpeech dataset show that R-EBMs can reduce the word error rates (WERs) by 8.2%/6.7% while improving areas under precision-recall curves of confidence scores by 12.6%/28.4% on test-clean/test-other sets. Furthermore, on a state-of-the-art model using self-supervised learning (wav2vec 2.0), R-EBMs still significantly improves both the WER and confidence estimation performance. 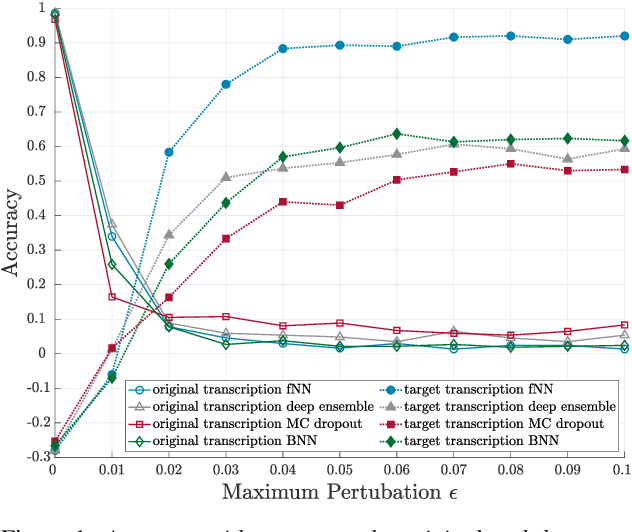 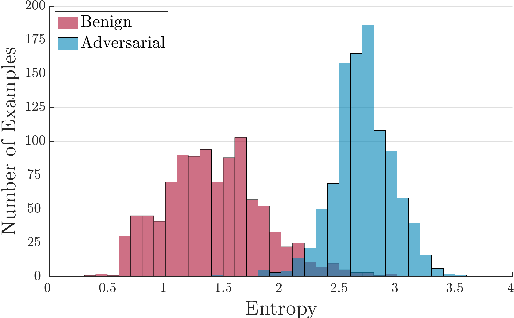 Machine learning systems and also, specifically, automatic speech recognition (ASR) systems are vulnerable against adversarial attacks, where an attacker maliciously changes the input. In the case of ASR systems, the most interesting cases are targeted attacks, in which an attacker aims to force the system into recognizing given target transcriptions in an arbitrary audio sample. The increasing number of sophisticated, quasi imperceptible attacks raises the question of countermeasures. In this paper, we focus on hybrid ASR systems and compare four acoustic models regarding their ability to indicate uncertainty under attack: a feed-forward neural network and three neural networks specifically designed for uncertainty quantification, namely a Bayesian neural network, Monte Carlo dropout, and a deep ensemble. We employ uncertainty measures of the acoustic model to construct a simple one-class classification model for assessing whether inputs are benign or adversarial. Based on this approach, we are able to detect adversarial examples with an area under the receiving operator curve score of more than 0.99. The neural networks for uncertainty quantification simultaneously diminish the vulnerability to the attack, which is reflected in a lower recognition accuracy of the malicious target text in comparison to a standard hybrid ASR system. 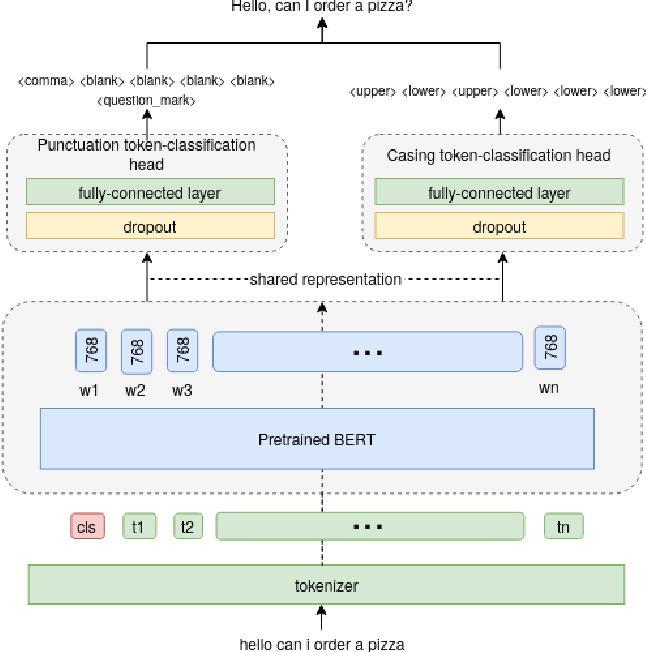 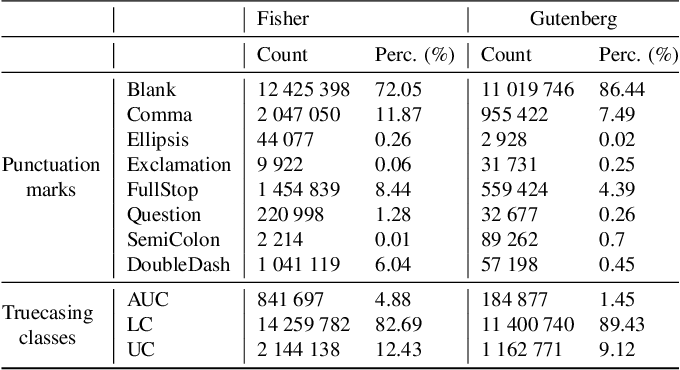 Capitalization and punctuation are important cues for comprehending written texts and conversational transcripts. Yet, many ASR systems do not produce punctuated and case-formatted speech transcripts. We propose to use a multi-task system that can exploit the relations between casing and punctuation to improve their prediction performance. Whereas text data for predicting punctuation and truecasing is seemingly abundant, we argue that written text resources are inadequate as training data for conversational models. We quantify the mismatch between written and conversational text domains by comparing the joint distributions of punctuation and word cases, and by testing our model cross-domain. Further, we show that by training the model in the written text domain and then transfer learning to conversations, we can achieve reasonable performance with less data.

The uninformative ordering of artificial neurons in Deep Neural Networks complicates visualizing activations in deeper layers. This is one reason why the internal structure of such models is very unintuitive. In neuroscience, activity of real brains can be visualized by highlighting active regions. Inspired by those techniques, we train a convolutional speech recognition model, where filters are arranged in a 2D grid and neighboring filters are similar to each other. We show, how those topographic filter maps visualize artificial neuron activations more intuitively. Moreover, we investigate, whether this causes phoneme-responsive neurons to be grouped in certain regions of the topographic map. 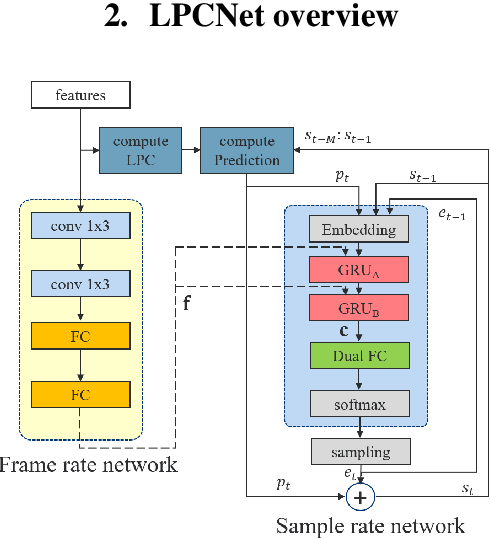 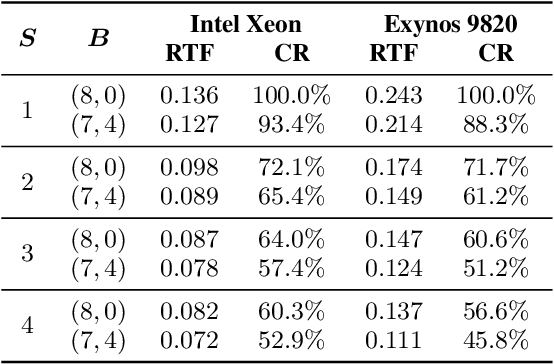 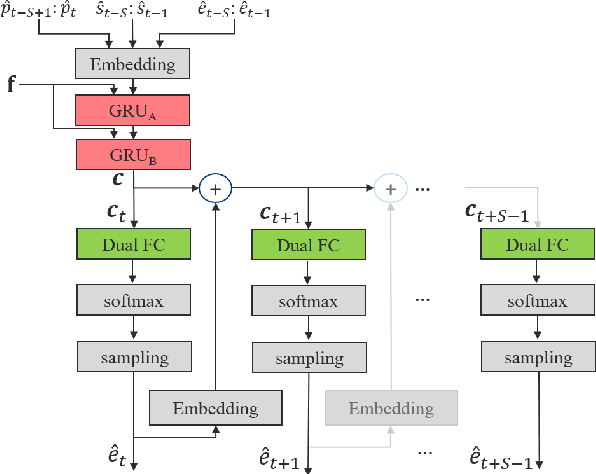 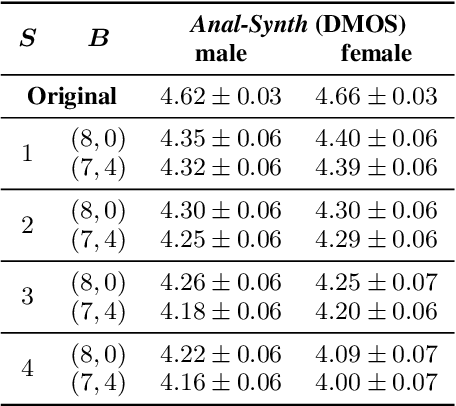 LPCNet is an efficient vocoder that combines linear prediction and deep neural network modules to keep the computational complexity low. In this work, we present two techniques to further reduce it's complexity, aiming for a low-cost LPCNet vocoder-based neural Text-to-Speech (TTS) System. These techniques are: 1) Sample-bunching, which allows LPCNet to generate more than one audio sample per inference; and 2) Bit-bunching, which reduces the computations in the final layer of LPCNet. With the proposed bunching techniques, LPCNet, in conjunction with a Deep Convolutional TTS (DCTTS) acoustic model, shows a 2.19x improvement over the baseline run-time when running on a mobile device, with a less than 0.1 decrease in TTS mean opinion score (MOS).