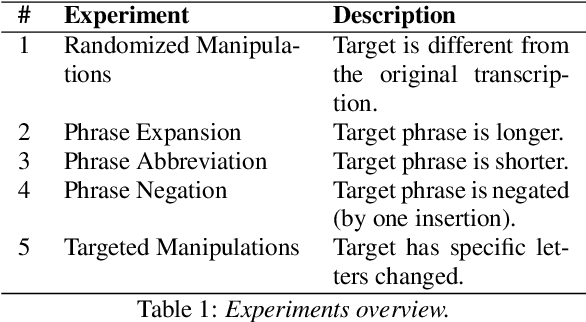 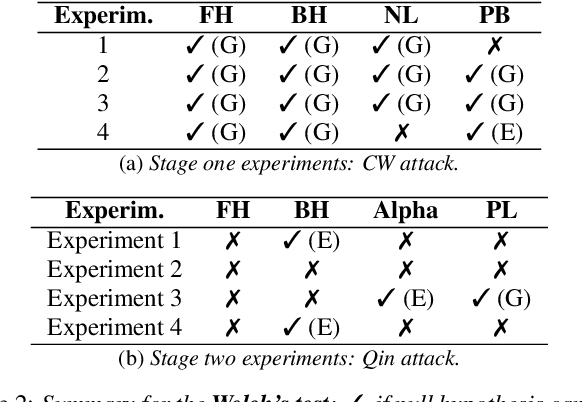 Automatic speech recognition (ASR) systems are ubiquitously present in our daily devices. They are vulnerable to adversarial attacks, where manipulated input samples fool the ASR system's recognition. While adversarial examples for various English ASR systems have already been analyzed, there exists no inter-language comparative vulnerability analysis. We compare the attackability of a German and an English ASR system, taking Deepspeech as an example. We investigate if one of the language models is more susceptible to manipulations than the other. The results of our experiments suggest statistically significant differences between English and German in terms of computational effort necessary for the successful generation of adversarial examples. This result encourages further research in language-dependent characteristics in the robustness analysis of ASR.


* Proc. 2021 ISCA Symposium on Security and Privacy in Speech Communication 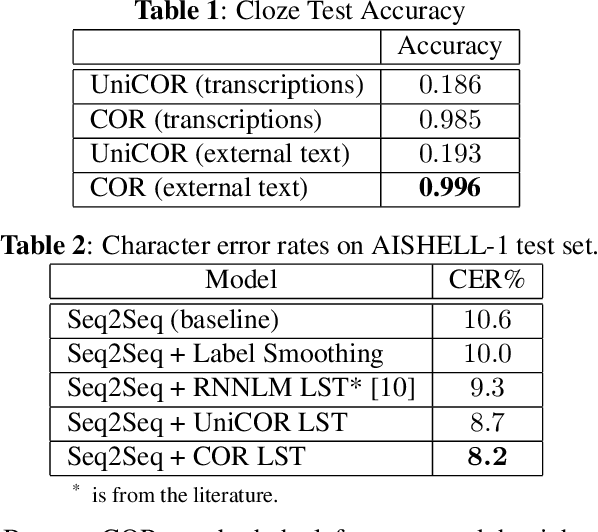 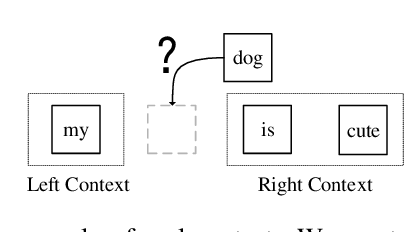 Because an attention based sequence-to-sequence speech (Seq2Seq) recognition model decodes a token sequence in a left-to-right manner, it is non-trivial for the decoder to leverage the whole context of the target sequence. In this paper, we propose a self-attention mechanism based language model called casual cloze completer (COR), which models the left context and the right context simultaneously. Then, we utilize our previously proposed "Learn Spelling from Teachers" approach to integrate the whole context knowledge from COR to the Seq2Seq model. We conduct the experiments on public Chinese dataset AISHELL-1. The experimental results show that leveraging whole context can improve the performance of the Seq2Seq model. 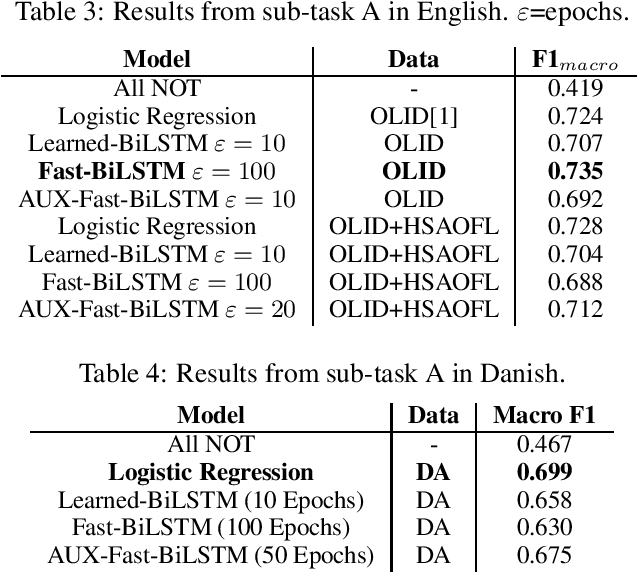 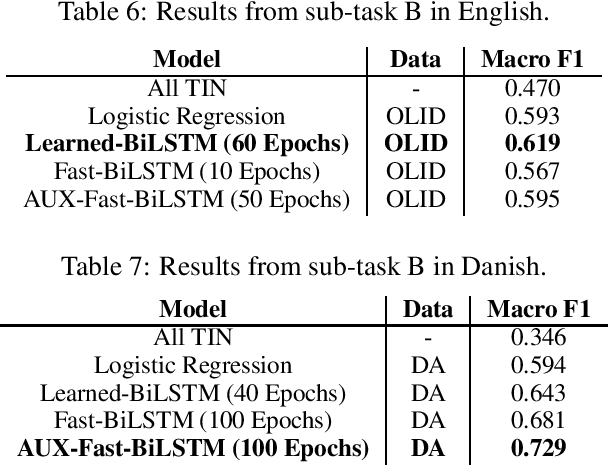 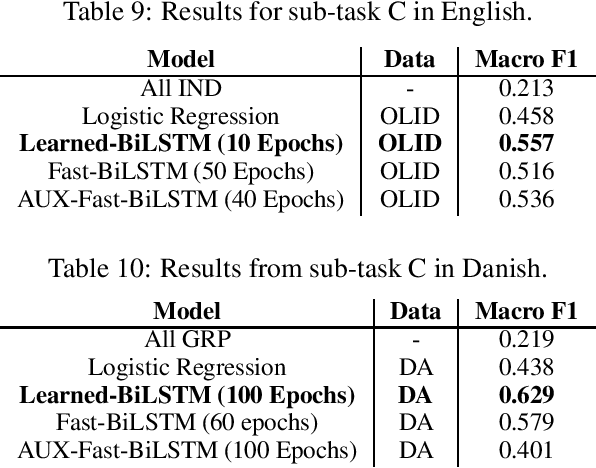 In recent years, many works have investigated the feasibility of conversational robots for performing specific tasks, such as healthcare and interview. Along with this development comes a practical issue: how should we synthesize robotic voices to meet the needs of different situations? In this paper, we discuss this issue from three perspectives: 1) the difficulties of synthesizing non-verbal and interaction-oriented speech signals, particularly backchannels; 2) the scenario classification for robotic voice synthesis; 3) the ethical issues regarding the design of robot voice for its emotion and identity. We present the findings of relevant literature and our prior work, trying to bring the attention of human-robot interaction researchers to design better conversational robots in the future. 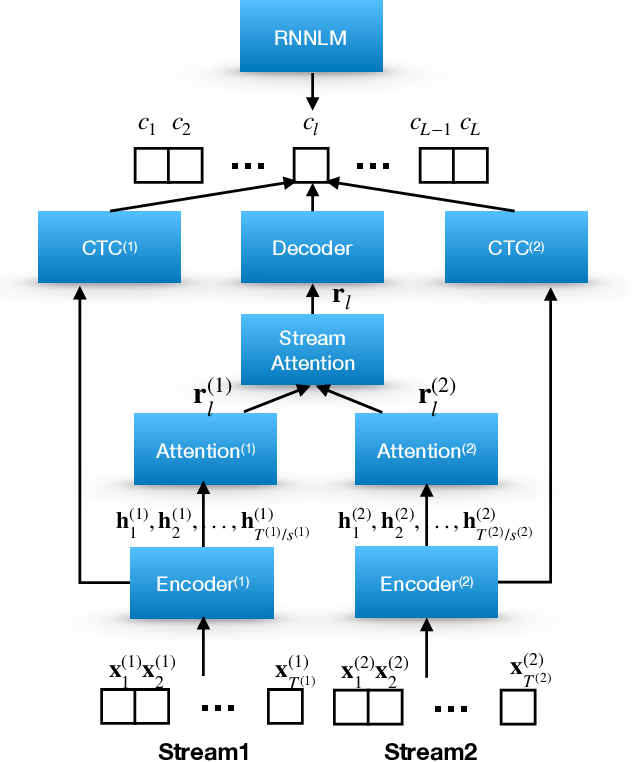 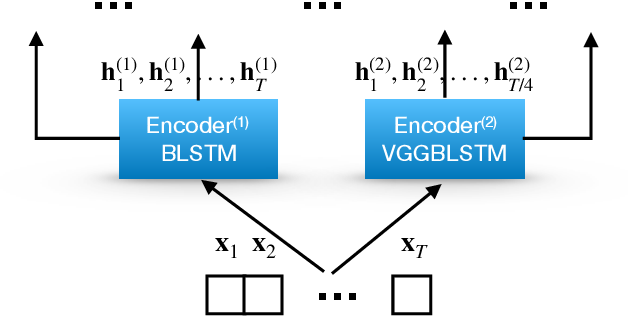 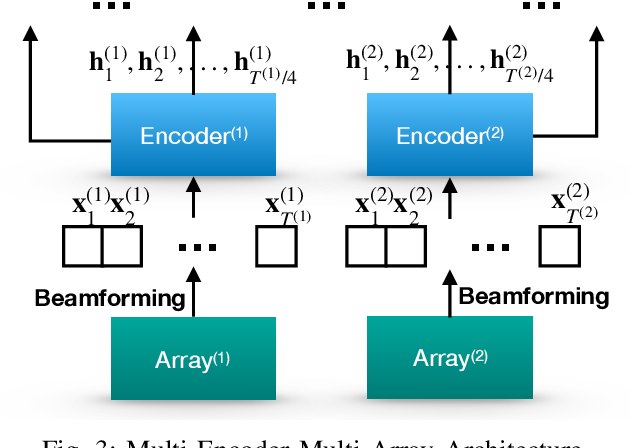 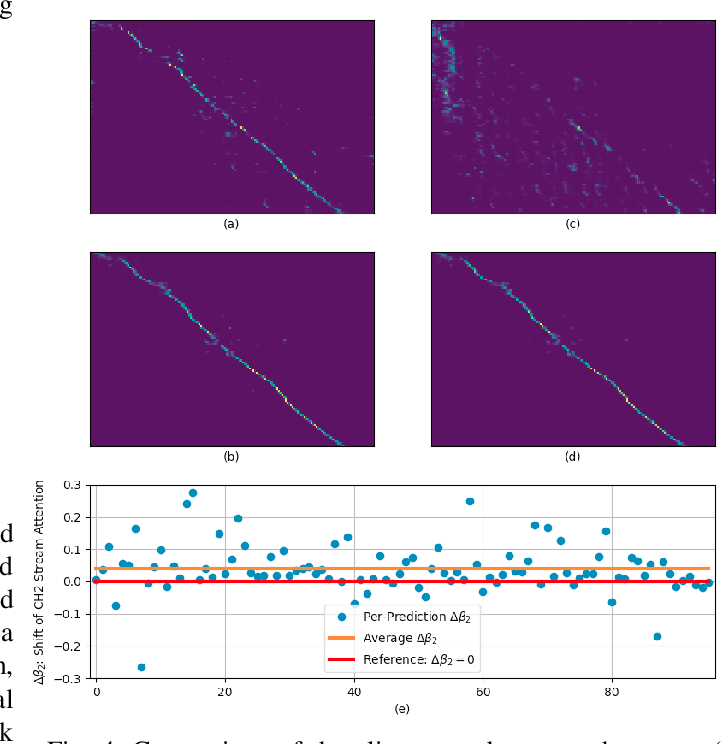 Attention-based methods and Connectionist Temporal Classification (CTC) network have been promising research directions for end-to-end (E2E) Automatic Speech Recognition (ASR). The joint CTC/Attention model has achieved great success by utilizing both architectures during multi-task training and joint decoding. In this work, we present a multi-stream framework based on joint CTC/Attention E2E ASR with parallel streams represented by separate encoders aiming to capture diverse information. On top of the regular attention networks, the Hierarchical Attention Network (HAN) is introduced to steer the decoder toward the most informative encoders. A separate CTC network is assigned to each stream to force monotonic alignments. Two representative framework have been proposed and discussed, which are Multi-Encoder Multi-Resolution (MEM-Res) framework and Multi-Encoder Multi-Array (MEM-Array) framework, respectively. In MEM-Res framework, two heterogeneous encoders with different architectures, temporal resolutions and separate CTC networks work in parallel to extract complimentary information from same acoustics. Experiments are conducted on Wall Street Journal (WSJ) and CHiME-4, resulting in relative Word Error Rate (WER) reduction of 18.0-32.1% and the best WER of 3.6% in the WSJ eval92 test set. The MEM-Array framework aims at improving the far-field ASR robustness using multiple microphone arrays which are activated by separate encoders. Compared with the best single-array results, the proposed framework has achieved relative WER reduction of 3.7% and 9.7% in AMI and DIRHA multi-array corpora, respectively, which also outperforms conventional fusion strategies.

A bandit approach to curriculum generation for automatic speech recognition 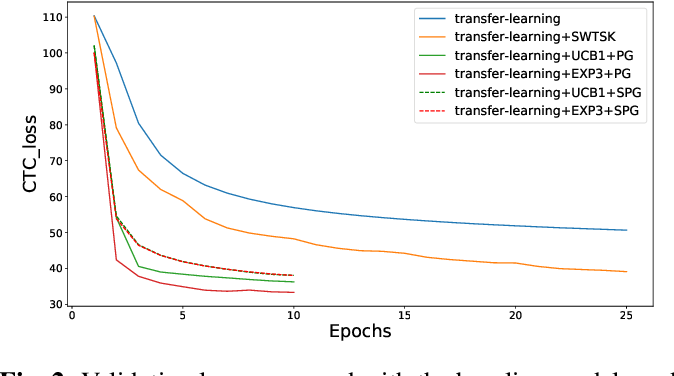 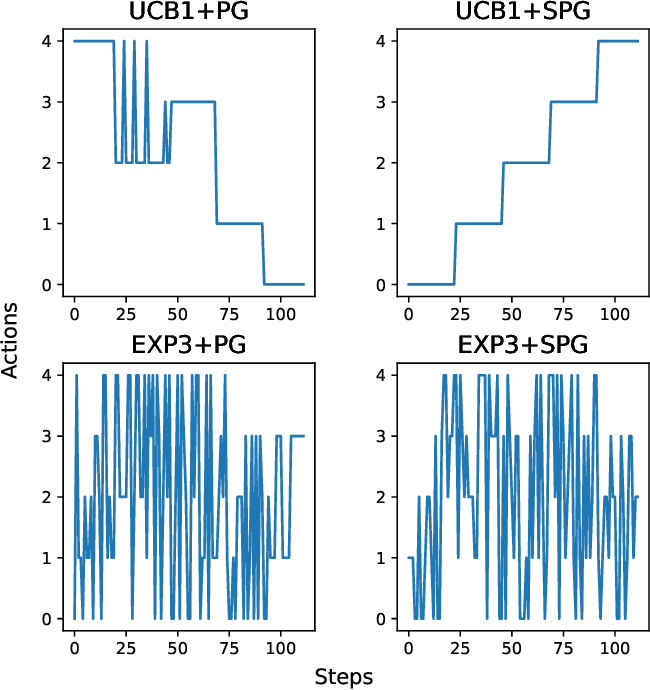 The Automated Speech Recognition (ASR) task has been a challenging domain especially for low data scenarios with few audio examples. This is the main problem in training ASR systems on the data from low-resource or marginalized languages. In this paper we present an approach to mitigate the lack of training data by employing Automated Curriculum Learning in combination with an adversarial bandit approach inspired by Reinforcement learning. The goal of the approach is to optimize the training sequence of mini-batches ranked by the level of difficulty and compare the ASR performance metrics against the random training sequence and discrete curriculum. We test our approach on a truly low-resource language and show that the bandit framework has a good improvement over the baseline transfer-learning model. 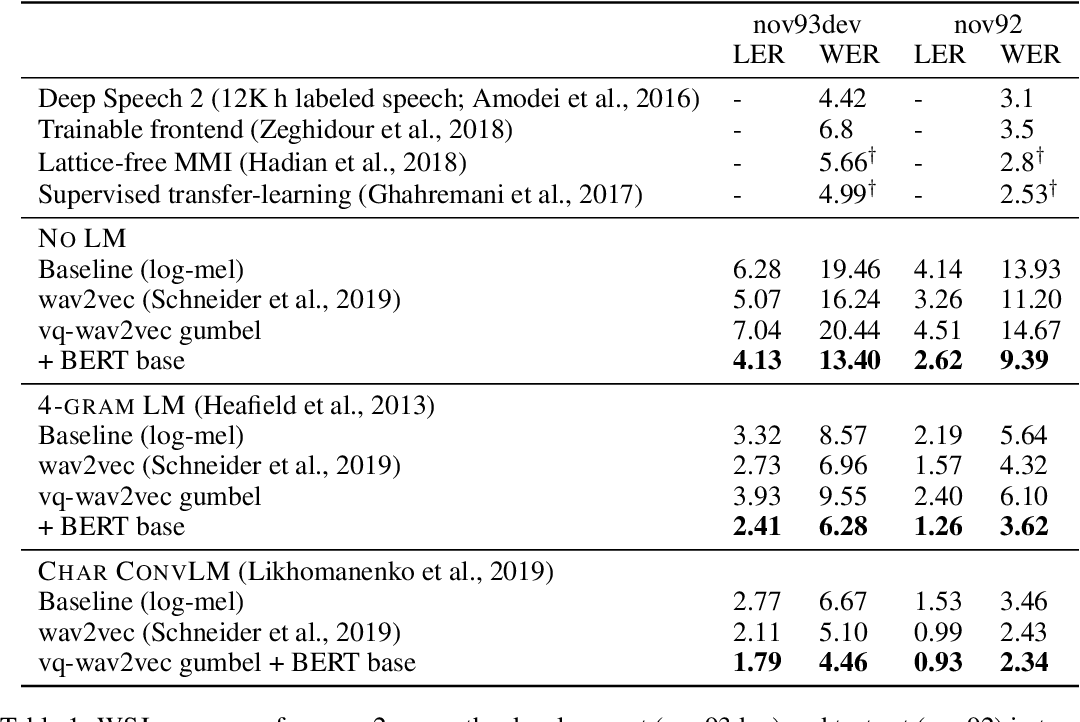 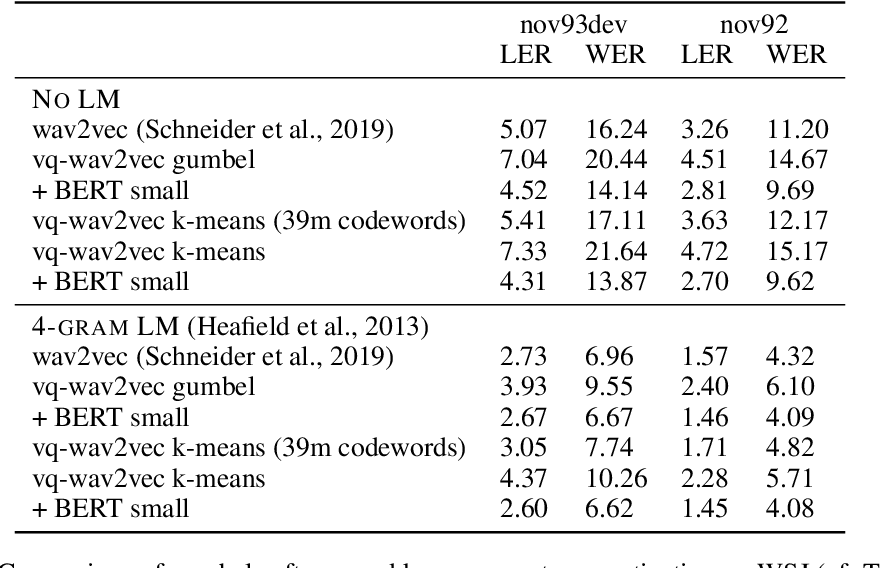 We propose vq-wav2vec to learn discrete representations of audio segments through a wav2vec-style self-supervised context prediction task. The algorithm uses either a gumbel softmax or online k-means clustering to quantize the dense representations. Discretization enables the direct application of algorithms from the NLP community which require discrete inputs. Experiments show that BERT pre-training achieves a new state of the art on TIMIT phoneme classification and WSJ speech recognition. 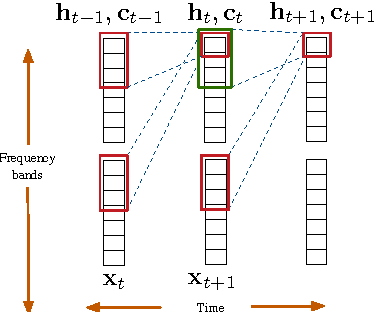 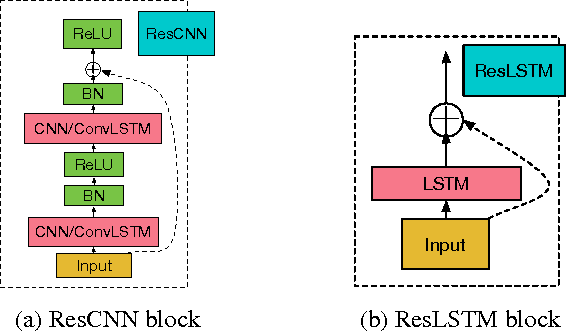 Sequence-to-sequence models have shown success in end-to-end speech recognition. However these models have only used shallow acoustic encoder networks. In our work, we successively train very deep convolutional networks to add more expressive power and better generalization for end-to-end ASR models. We apply network-in-network principles, batch normalization, residual connections and convolutional LSTMs to build very deep recurrent and convolutional structures. Our models exploit the spectral structure in the feature space and add computational depth without overfitting issues. We experiment with the WSJ ASR task and achieve 10.5\% word error rate without any dictionary or language using a 15 layer deep network. 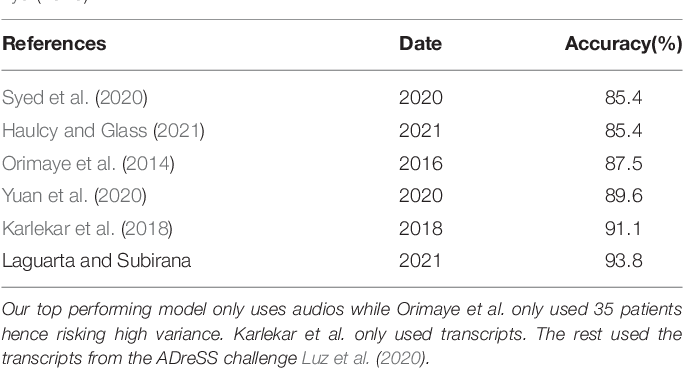 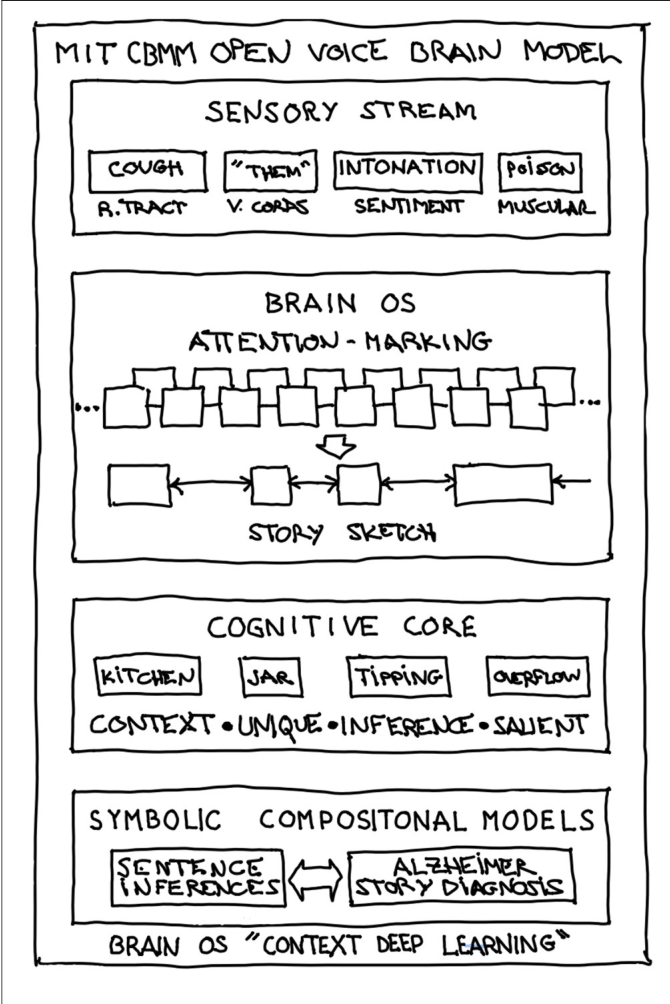 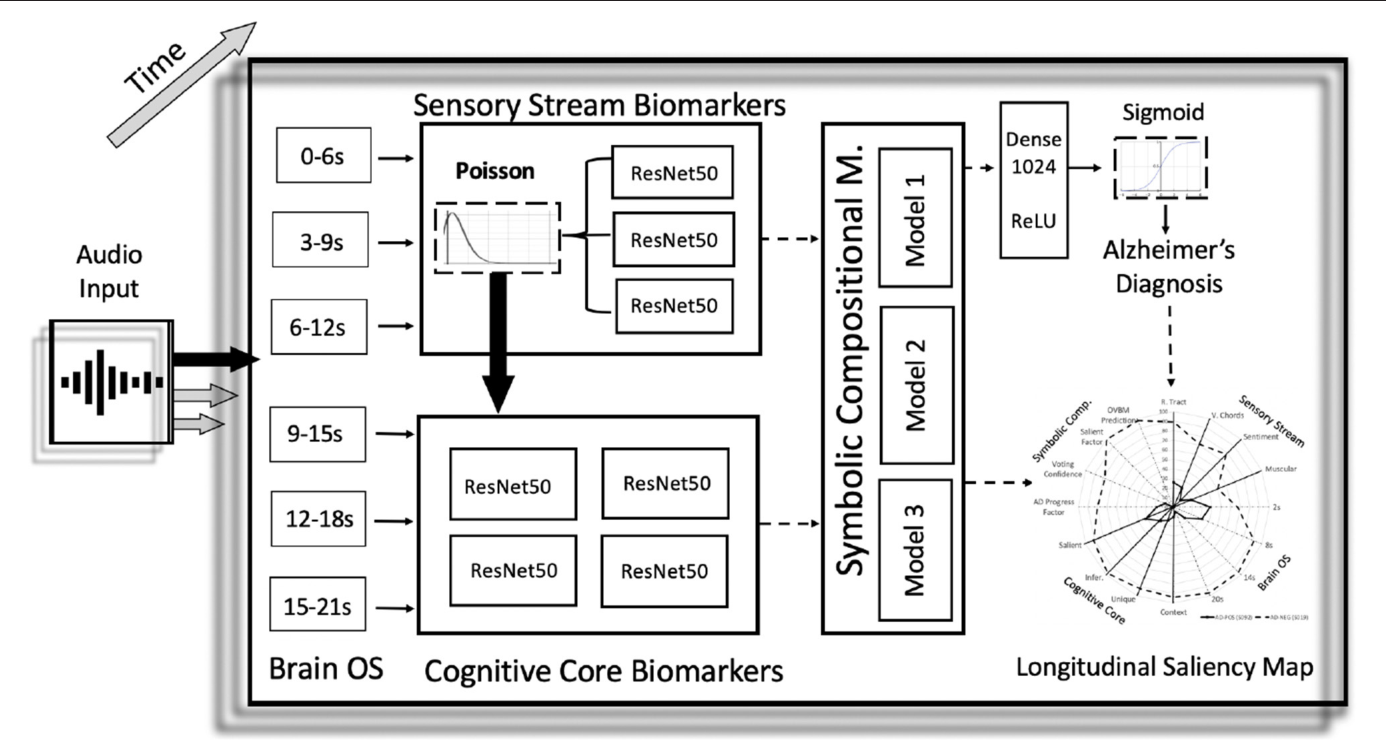 We introduce a novel audio processing architecture, the Open Voice Brain Model (OVBM), improving detection accuracy for Alzheimer's (AD) longitudinal discrimination from spontaneous speech. We also outline the OVBM design methodology leading us to such architecture, which in general can incorporate multimodal biomarkers and target simultaneously several diseases and other AI tasks. Key in our methodology is the use of multiple biomarkers complementing each other, and when two of them uniquely identify different subjects in a target disease we say they are orthogonal. We illustrate the methodology by introducing 16 biomarkers, three of which are orthogonal, demonstrating simultaneous above state-of-the-art discrimination for apparently unrelated diseases such as AD and COVID-19. Inspired by research conducted at the MIT Center for Brain Minds and Machines, OVBM combines biomarker implementations of the four modules of intelligence: The brain OS chunks and overlaps audio samples and aggregates biomarker features from the sensory stream and cognitive core creating a multi-modal graph neural network of symbolic compositional models for the target task. We apply it to AD, achieving above state-of-the-art accuracy of 93.8% on raw audio, while extracting a subject saliency map that longitudinally tracks relative disease progression using multiple biomarkers, 16 in the reported AD task. The ultimate aim is to help medical practice by detecting onset and treatment impact so that intervention options can be longitudinally tested. Using the OBVM design methodology, we introduce a novel lung and respiratory tract biomarker created using 200,000+ cough samples to pre-train a model discriminating cough cultural origin. This cough dataset sets a new benchmark as the largest audio health dataset with 30,000+ subjects participating in April 2020, demonstrating for the first-time cough cultural bias. 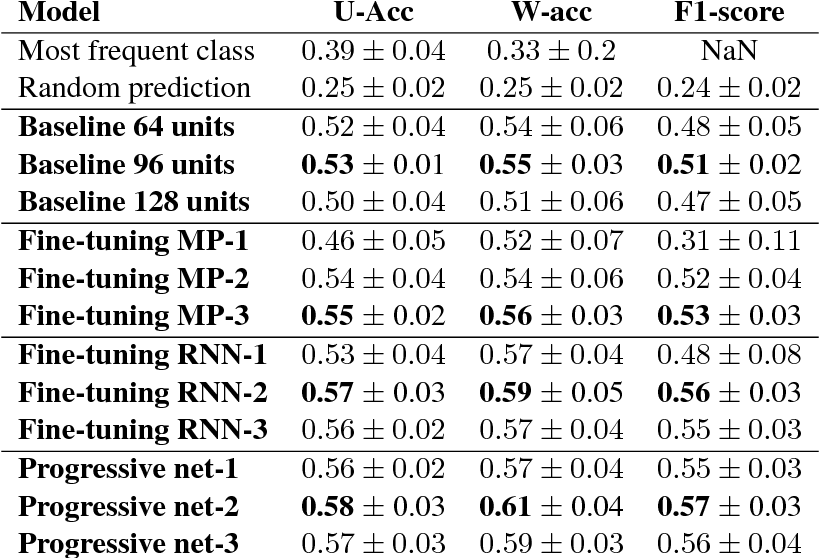 Acoustic emotion recognition aims to categorize the affective state of the speaker and is still a difficult task for machine learning models. The difficulties come from the scarcity of training data, general subjectivity in emotion perception resulting in low annotator agreement, and the uncertainty about which features are the most relevant and robust ones for classification. In this paper, we will tackle the latter problem. Inspired by the recent success of transfer learning methods we propose a set of architectures which utilize neural representations inferred by training on large speech databases for the acoustic emotion recognition task. Our experiments on the IEMOCAP dataset show ~10% relative improvements in the accuracy and F1-score over the baseline recurrent neural network which is trained end-to-end for emotion recognition.