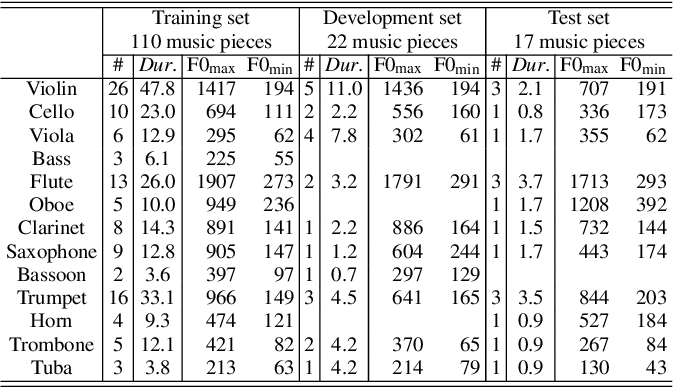 Recent neural waveform synthesizers such as WaveNet, WaveGlow, and the neural-source-filter (NSF) model have shown good performance in speech synthesis despite their different methods of waveform generation. The similarity between speech and music audio synthesis techniques suggests interesting avenues to explore in terms of the best way to apply speech synthesizers in the music domain. This work compares three neural synthesizers used for musical instrument sounds generation under three scenarios: training from scratch on music data, zero-shot learning from the speech domain, and fine-tuning-based adaptation from the speech to the music domain. The results of a large-scale perceptual test demonstrated that the performance of three synthesizers improved when they were pre-trained on speech data and fine-tuned on music data, which indicates the usefulness of knowledge from speech data for music audio generation. Among the synthesizers, WaveGlow showed the best potential in zero-shot learning while NSF performed best in the other scenarios and could generate samples that were perceptually close to natural audio. 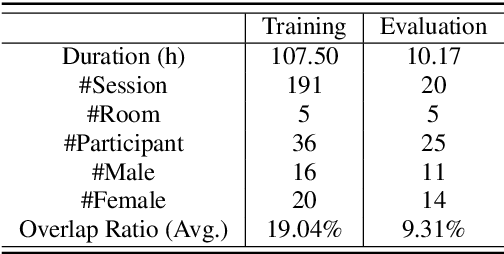 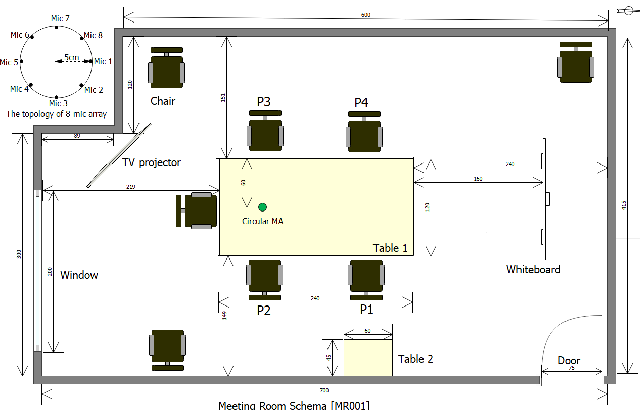 In this paper, we present AISHELL-4, a sizable real-recorded Mandarin speech dataset collected by 8-channel circular microphone array for speech processing in conference scenario. The dataset consists of 211 recorded meeting sessions, each containing 4 to 8 speakers, with a total length of 118 hours. This dataset aims to bride the advanced research on multi-speaker processing and the practical application scenario in three aspects. With real recorded meetings, AISHELL-4 provides realistic acoustics and rich natural speech characteristics in conversation such as short pause, speech overlap, quick speaker turn, noise, etc. Meanwhile, the accurate transcription and speaker voice activity are provided for each meeting in AISHELL-4. This allows the researchers to explore different aspects in meeting processing, ranging from individual tasks such as speech front-end processing, speech recognition and speaker diarization, to multi-modality modeling and joint optimization of relevant tasks. Given most open source dataset for multi-speaker tasks are in English, AISHELL-4 is the only Mandarin dataset for conversation speech, providing additional value for data diversity in speech community. 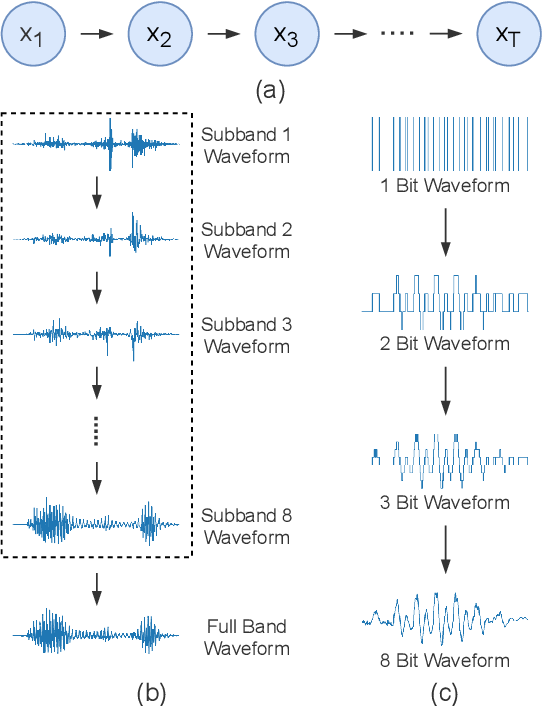 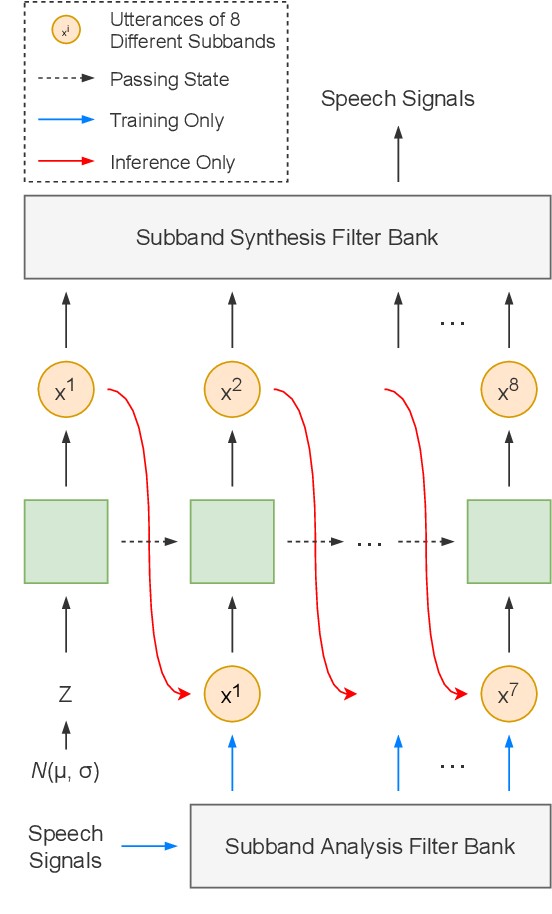 Autoregressive models have achieved outstanding performance in neural speech synthesis tasks. Though they can generate highly natural human speech, the iterative generation inevitably makes the synthesis time proportional to the utterance's length, leading to low efficiency. Many works were dedicated to generating the whole speech time sequence in parallel and then proposed GAN-based, flow-based, and score-based models. This paper proposed a new thought for the autoregressive generation. Instead of iteratively predicting samples in a time sequence, the proposed model performs frequency-wise autoregressive generation (FAR) and bit-wise autoregressive generation (BAR) to synthesize speech. In FAR, a speech utterance is first split into different frequency subbands. The proposed model generates a subband conditioned on the previously generated one. A full band speech can then be reconstructed by using these generated subbands and a synthesis filter bank. Similarly, in BAR, an 8-bit quantized signal is generated iteratively from the first bit. By redesigning the autoregressive method to compute in domains other than the time domain, the number of iterations in the proposed model is no longer proportional to the utterance's length but the number of subbands/bits. The inference efficiency is hence significantly increased. Besides, a post-filter is employed to sample audio signals from output posteriors, and its training objective is designed based on the characteristics of the proposed autoregressive methods. The experimental results show that the proposed model is able to synthesize speech faster than real-time without GPU acceleration. Compared with the baseline autoregressive and non-autoregressive models, the proposed model achieves better MOS and shows its good generalization ability while synthesizing 44 kHz speech or utterances from unseen speakers. 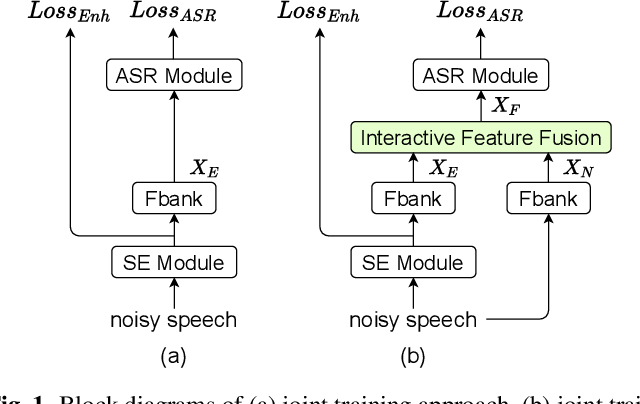 Speech enhancement (SE) aims to suppress the additive noise from a noisy speech signal to improve the speech's perceptual quality and intelligibility. However, the over-suppression phenomenon in the enhanced speech might degrade the performance of downstream automatic speech recognition (ASR) task due to the missing latent information. To alleviate such problem, we propose an interactive feature fusion network (IFF-Net) for noise-robust speech recognition to learn complementary information from the enhanced feature and original noisy feature. Experimental results show that the proposed method achieves absolute word error rate (WER) reduction of 4.1% over the best baseline on RATS Channel-A corpus. Our further analysis indicates that the proposed IFF-Net can complement some missing information in the over-suppressed enhanced feature. 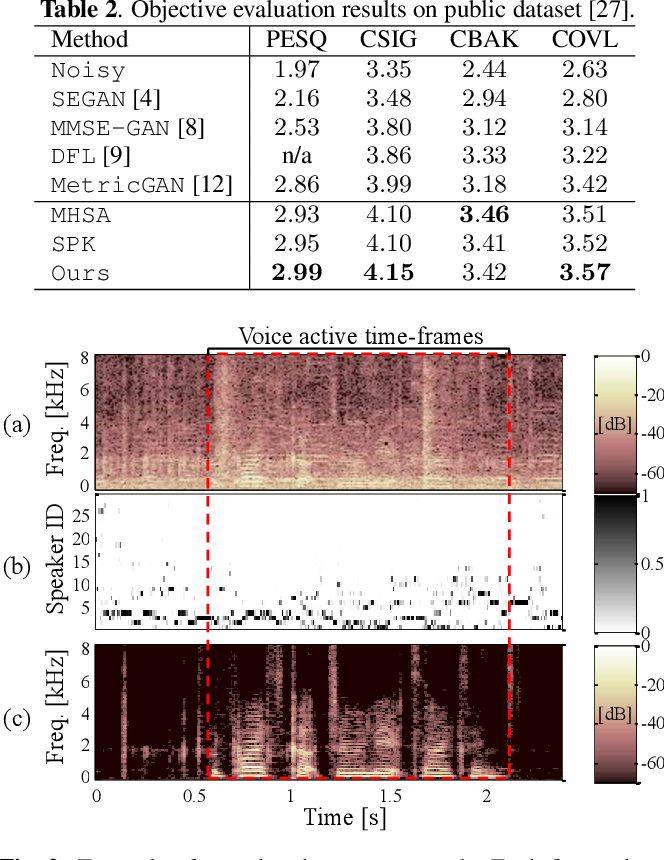 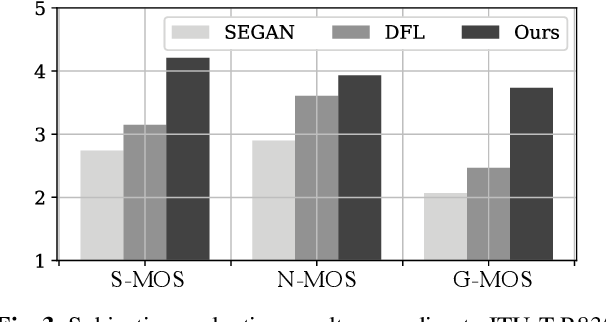 This paper investigates a self-adaptation method for speech enhancement using auxiliary speaker-aware features; we extract a speaker representation used for adaptation directly from the test utterance. Conventional studies of deep neural network (DNN)--based speech enhancement mainly focus on building a speaker independent model. Meanwhile, in speech applications including speech recognition and synthesis, it is known that model adaptation to the target speaker improves the accuracy. Our research question is whether a DNN for speech enhancement can be adopted to unknown speakers without any auxiliary guidance signal in test-phase. To achieve this, we adopt multi-task learning of speech enhancement and speaker identification, and use the output of the final hidden layer of speaker identification branch as an auxiliary feature. In addition, we use multi-head self-attention for capturing long-term dependencies in the speech and noise. Experimental results on a public dataset show that our strategy achieves the state-of-the-art performance and also outperform conventional methods in terms of subjective quality.

Looking to Listen at the Cocktail Party: A Speaker-Independent Audio-Visual Model for Speech Separation 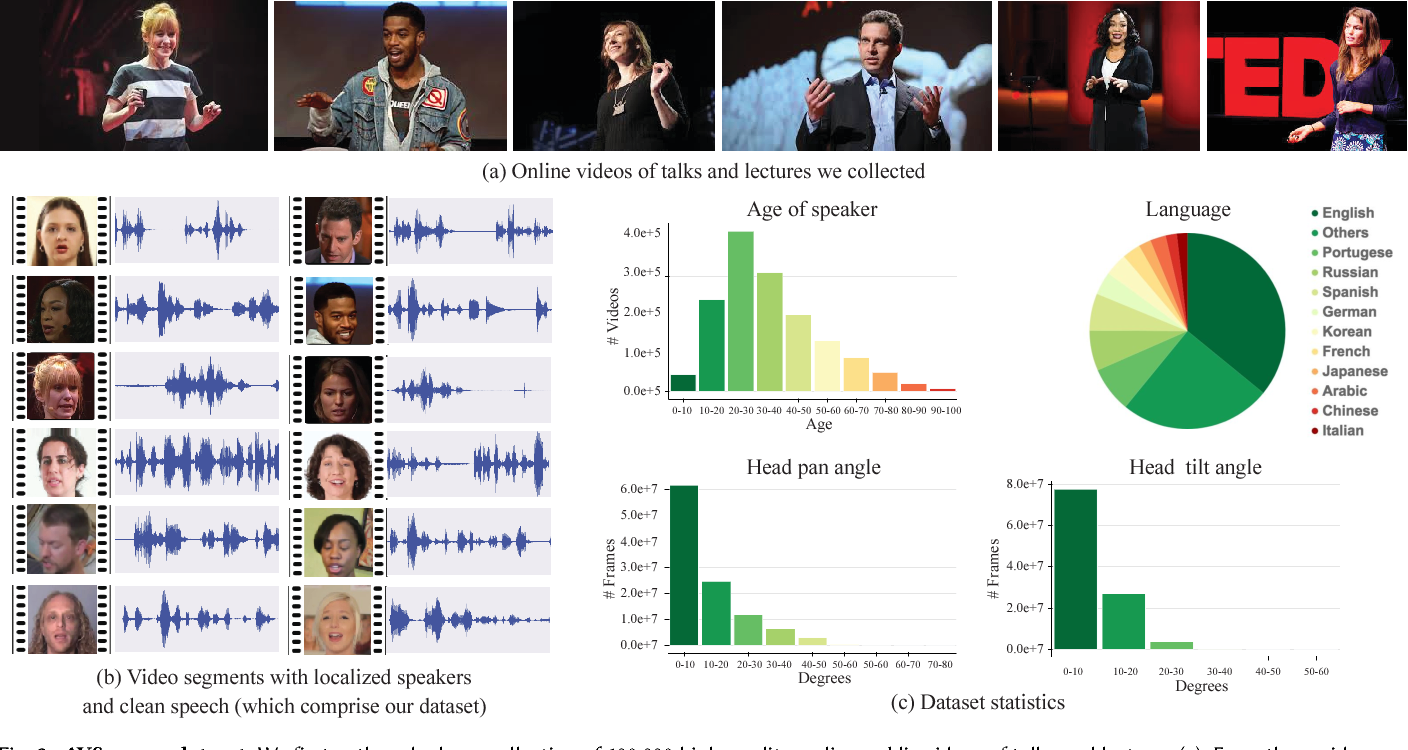 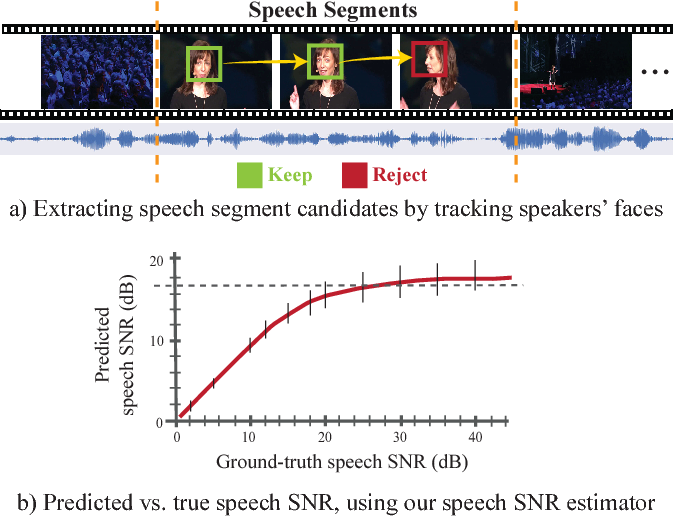 We present a joint audio-visual model for isolating a single speech signal from a mixture of sounds such as other speakers and background noise. Solving this task using only audio as input is extremely challenging and does not provide an association of the separated speech signals with speakers in the video. In this paper, we present a deep network-based model that incorporates both visual and auditory signals to solve this task. The visual features are used to "focus" the audio on desired speakers in a scene and to improve the speech separation quality. To train our joint audio-visual model, we introduce AVSpeech, a new dataset comprised of thousands of hours of video segments from the Web. We demonstrate the applicability of our method to classic speech separation tasks, as well as real-world scenarios involving heated interviews, noisy bars, and screaming children, only requiring the user to specify the face of the person in the video whose speech they want to isolate. Our method shows clear advantage over state-of-the-art audio-only speech separation in cases of mixed speech. In addition, our model, which is speaker-independent (trained once, applicable to any speaker), produces better results than recent audio-visual speech separation methods that are speaker-dependent (require training a separate model for each speaker of interest). 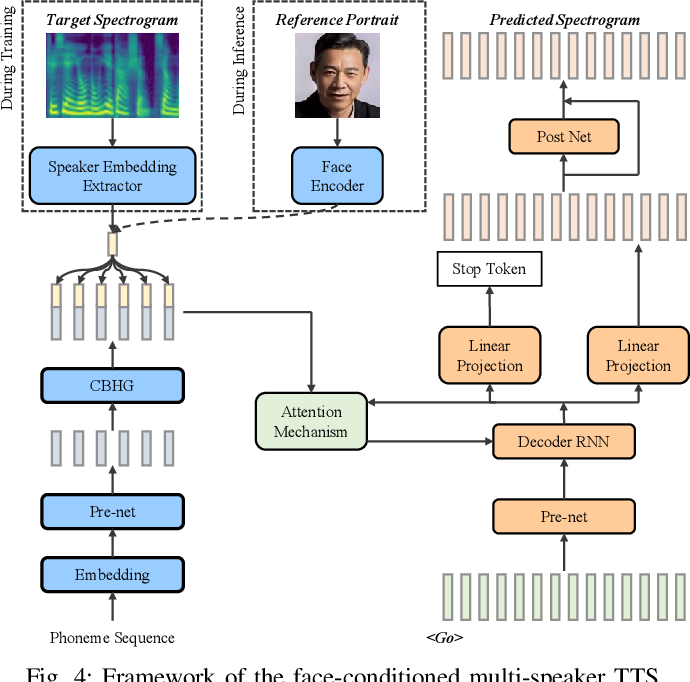 Listening to Sounds of Silence for Speech Denoising

We introduce a deep learning model for speech denoising, a long-standing challenge in audio analysis arising in numerous applications. Our approach is based on a key observation about human speech: there is often a short pause between each sentence or word. In a recorded speech signal, those pauses introduce a series of time periods during which only noise is present. We leverage these incidental silent intervals to learn a model for automatic speech denoising given only mono-channel audio. Detected silent intervals over time expose not just pure noise but its time-varying features, allowing the model to learn noise dynamics and suppress it from the speech signal. Experiments on multiple datasets confirm the pivotal role of silent interval detection for speech denoising, and our method outperforms several state-of-the-art denoising methods, including those that accept only audio input (like ours) and those that denoise based on audiovisual input (and hence require more information). We also show that our method enjoys excellent generalization properties, such as denoising spoken languages not seen during training.


* 9 pages, 6 figures, accepted in NeurIPS 2020; Sound examples can be found at http://www.cs.columbia.edu/cg/listen_to_the_silence/

Speech is one of the most common forms of communication in humans. Speech commands are essential parts of multimodal controlling of prosthetic hands. In the past decades, researchers used automatic speech recognition systems for controlling prosthetic hands by using speech commands. Automatic speech recognition systems learn how to map human speech to text. Then, they used natural language processing or a look-up table to map the estimated text to a trajectory. However, the performance of conventional speech-controlled prosthetic hands is still unsatisfactory. Recent advancements in general-purpose graphics processing units (GPGPUs) enable intelligent devices to run deep neural networks in real-time. Thus, architectures of intelligent systems have rapidly transformed from the paradigm of composite subsystems optimization to the paradigm of end-to-end optimization. In this paper, we propose an end-to-end convolutional neural network (CNN) that maps speech 2D features directly to trajectories for prosthetic hands. The proposed convolutional neural network is lightweight, and thus it runs in real-time in an embedded GPGPU. The proposed method can use any type of speech 2D feature that has local correlations in each dimension such as spectrogram, MFCC, or PNCC. We omit the speech to text step in controlling the prosthetic hand in this paper. The network is written in Python with Keras library that has a TensorFlow backend. We optimized the CNN for NVIDIA Jetson TX2 developer kit. Our experiment on this CNN demonstrates a root-mean-square error of 0.119 and 20ms running time to produce trajectory outputs corresponding to the voice input data. To achieve a lower error in real-time, we can optimize a similar CNN for a more powerful embedded GPGPU such as NVIDIA AGX Xavier.

This paper describes a dataset and protocols for evaluating continuous speech separation algorithms. Most prior studies on speech separation use pre-segmented signals of artificially mixed speech utterances which are mostly \emph{fully} overlapped, and the algorithms are evaluated based on signal-to-distortion ratio or similar performance metrics. However, in natural conversations, a speech signal is continuous, containing both overlapped and overlap-free components. In addition, the signal-based metrics have very weak correlations with automatic speech recognition (ASR) accuracy. We think that not only does this make it hard to assess the practical relevance of the tested algorithms, it also hinders researchers from developing systems that can be readily applied to real scenarios. In this paper, we define continuous speech separation (CSS) as a task of generating a set of non-overlapped speech signals from a \textit{continuous} audio stream that contains multiple utterances that are \emph{partially} overlapped by a varying degree. A new real recorded dataset, called LibriCSS, is derived from LibriSpeech by concatenating the corpus utterances to simulate a conversation and capturing the audio replays with far-field microphones. A Kaldi-based ASR evaluation protocol is also established by using a well-trained multi-conditional acoustic model. By using this dataset, several aspects of a recently proposed speaker-independent CSS algorithm are investigated. The dataset and evaluation scripts are available to facilitate the research in this direction.