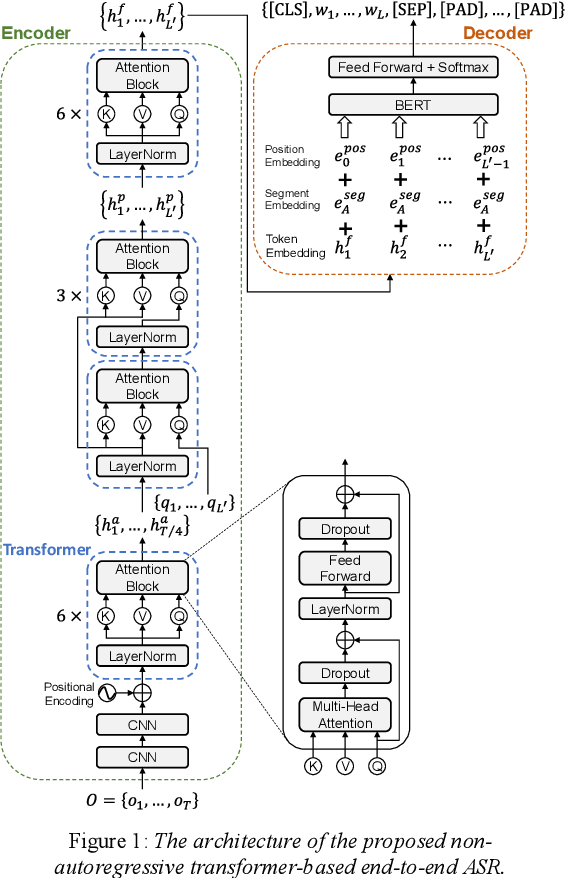 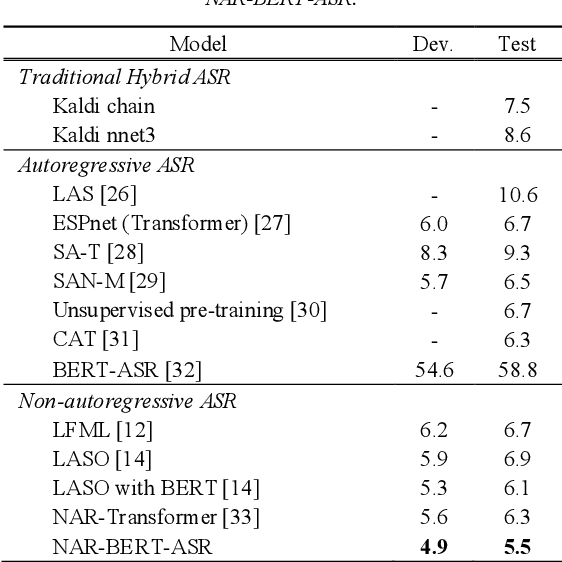 Transformer-based models have led to a significant innovation in various classic and practical subjects, including speech processing, natural language processing, and computer vision. On top of the transformer, the attention-based end-to-end automatic speech recognition (ASR) models have become a popular fashion in recent years. Specifically, the non-autoregressive modeling, which can achieve fast inference speed and comparable performance when compared to conventional autoregressive methods, is an emergent research topic. In the context of natural language processing, the bidirectional encoder representations from transformers (BERT) model has received widespread attention, partially due to its ability to infer contextualized word representations and to obtain superior performances of downstream tasks by performing only simple fine-tuning. In order to not only inherit the advantages of non-autoregressive ASR modeling, but also receive benefits from a pre-trained language model (e.g., BERT), a non-autoregressive transformer-based end-to-end ASR model based on BERT is presented in this paper. A series of experiments conducted on the AISHELL-1 dataset demonstrates competitive or superior results of the proposed model when compared to state-of-the-art ASR systems.

crank: An Open-Source Software for Nonparallel Voice Conversion Based on Vector-Quantized Variational Autoencoder 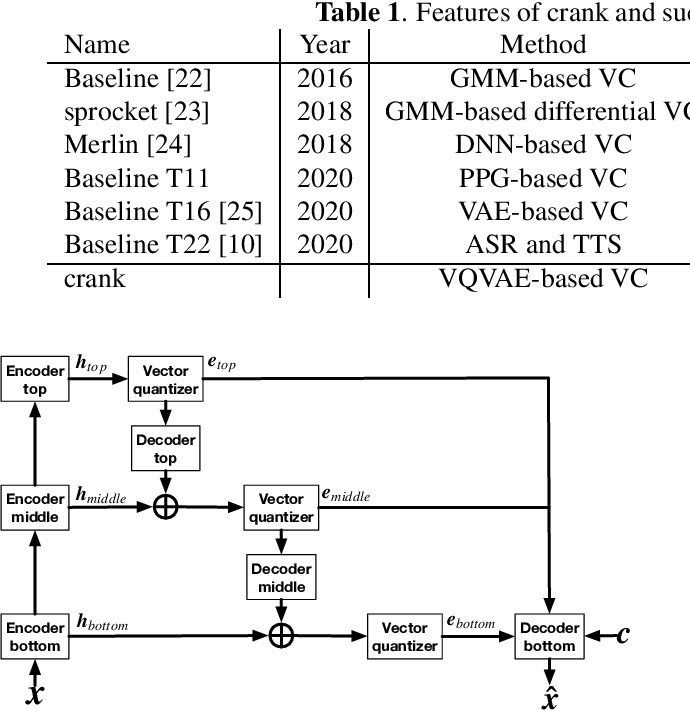 In this paper, we present an open-source software for developing a nonparallel voice conversion (VC) system named crank. Although we have released an open-source VC software based on the Gaussian mixture model named sprocket in the last VC Challenge, it is not straightforward to apply any speech corpus because it is necessary to prepare parallel utterances of source and target speakers to model a statistical conversion function. To address this issue, in this study, we developed a new open-source VC software that enables users to model the conversion function by using only a nonparallel speech corpus. For implementing the VC software, we used a vector-quantized variational autoencoder (VQVAE). To rapidly examine the effectiveness of recent technologies developed in this research field, crank also supports several representative works for autoencoder-based VC methods such as the use of hierarchical architectures, cyclic architectures, generative adversarial networks, speaker adversarial training, and neural vocoders. Moreover, it is possible to automatically estimate objective measures such as mel-cepstrum distortion and pseudo mean opinion score based on MOSNet. In this paper, we describe representative functions developed in crank and make brief comparisons by objective evaluations. 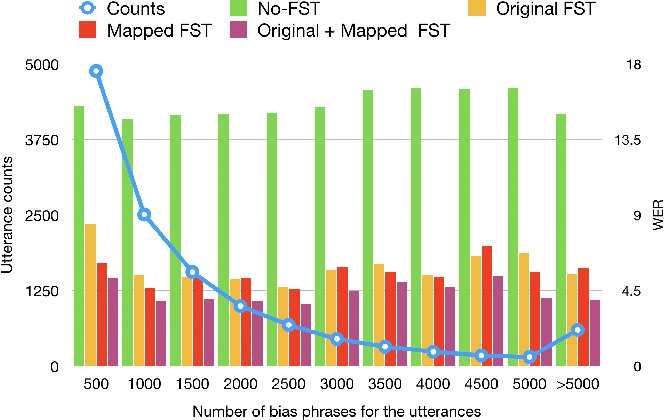 In recent years, all-neural, end-to-end (E2E) ASR systems gained rapid interest in the speech recognition community. They convert speech input to text units in a single trainable Neural Network model. In ASR, many utterances contain rich named entities. Such named entities may be user or location specific and they are not seen during training. A single model makes it inflexible to utilize dynamic contextual information during inference. In this paper, we propose to train a context aware E2E model and allow the beam search to traverse into the context FST during inference. We also propose a simple method to adjust the cost discrepancy between the context FST and the base model. This algorithm is able to reduce the named entity utterance WER by 57% with little accuracy degradation on regular utterances. Although an E2E model does not need pronunciation dictionary, it's interesting to make use of existing pronunciation knowledge to improve accuracy. In this paper, we propose an algorithm to map the rare entity words to common words via pronunciation and treat the mapped words as an alternative form to the original word during recognition. This algorithm further reduces the WER on the named entity utterances by another 31%.


* Code available in github at https://github.com/ARM-software/ML-KWS-for-MCU 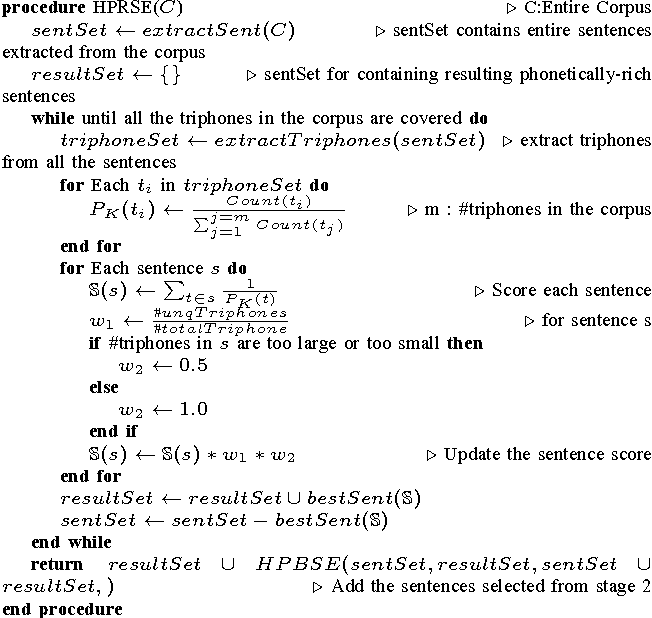 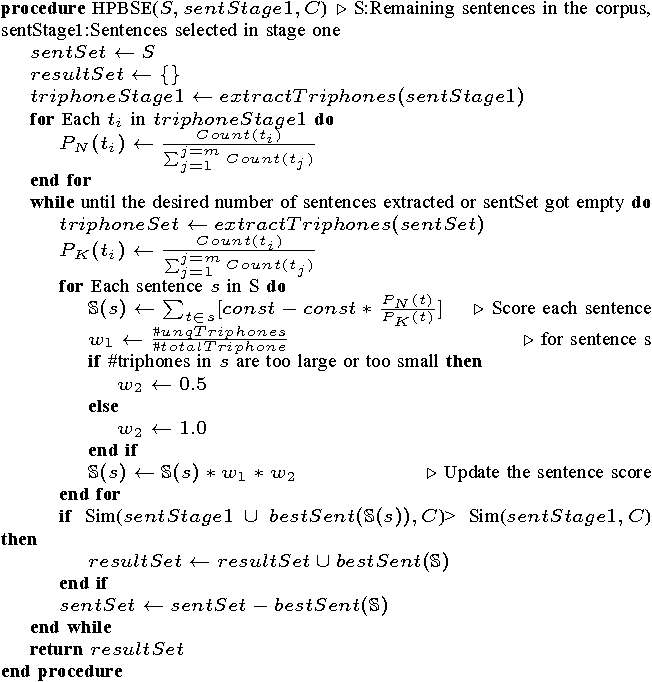 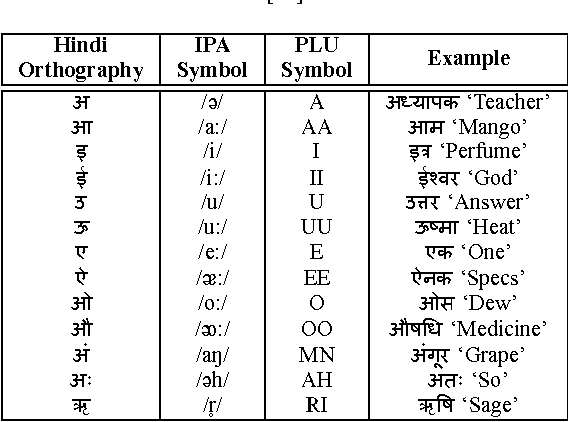 Automatic speech recognition (ASR) and Text to speech (TTS) are two prominent area of research in human computer interaction nowadays. A set of phonetically rich sentences is in a matter of importance in order to develop these two interactive modules of HCI. Essentially, the set of phonetically rich sentences has to cover all possible phone units distributed uniformly. Selecting such a set from a big corpus with maintaining phonetic characteristic based similarity is still a challenging problem. The major objective of this paper is to devise a criteria in order to select a set of sentences encompassing all phonetic aspects of a corpus with size as minimum as possible. First, this paper presents a statistical analysis of Hindi phonetics by observing the structural characteristics. Further a two stage algorithm is proposed to extract phonetically rich sentences with a high variety of triphones from the EMILLE Hindi corpus. The algorithm consists of a distance measuring criteria to select a sentence in order to improve the triphone distribution. Moreover, a special preprocessing method is proposed to score each triphone in terms of inverse probability in order to fasten the algorithm. The results show that the approach efficiently build uniformly distributed phonetically-rich corpus with optimum number of sentences. 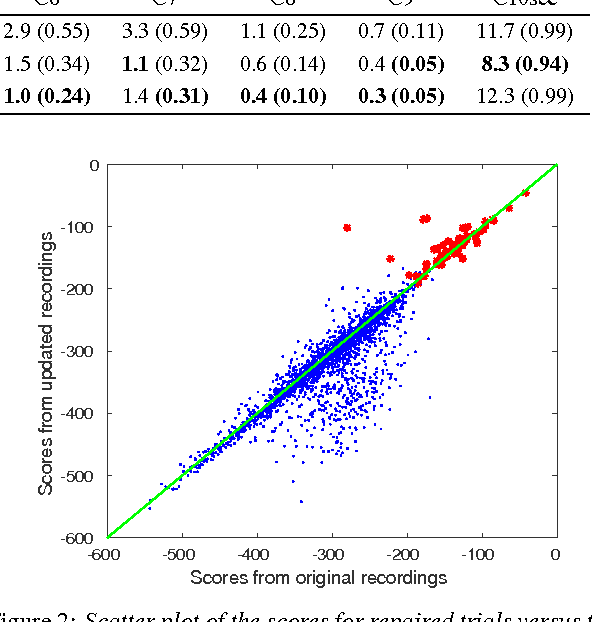 We present the recent advances along with an error analysis of the IBM speaker recognition system for conversational speech. Some of the key advancements that contribute to our system include: a nearest-neighbor discriminant analysis (NDA) approach (as opposed to LDA) for intersession variability compensation in the i-vector space, the application of speaker and channel-adapted features derived from an automatic speech recognition (ASR) system for speaker recognition, and the use of a DNN acoustic model with a very large number of output units (~10k senones) to compute the frame-level soft alignments required in the i-vector estimation process. We evaluate these techniques on the NIST 2010 SRE extended core conditions (C1-C9), as well as the 10sec-10sec condition. To our knowledge, results achieved by our system represent the best performances published to date on these conditions. For example, on the extended tel-tel condition (C5) the system achieves an EER of 0.59%. To garner further understanding of the remaining errors (on C5), we examine the recordings associated with the low scoring target trials, where various issues are identified for the problematic recordings/trials. Interestingly, it is observed that correcting the pathological recordings not only improves the scores for the target trials but also for the nontarget trials.

The 2015 Sheffield System for Transcription of Multi-Genre Broadcast Media 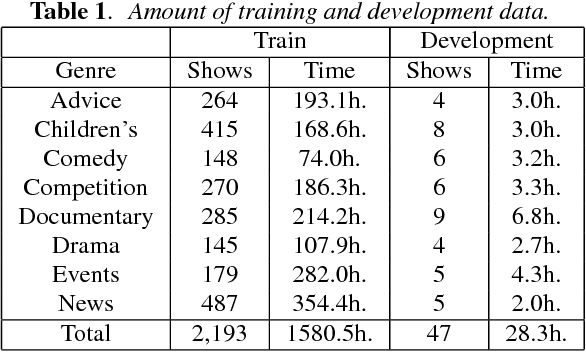 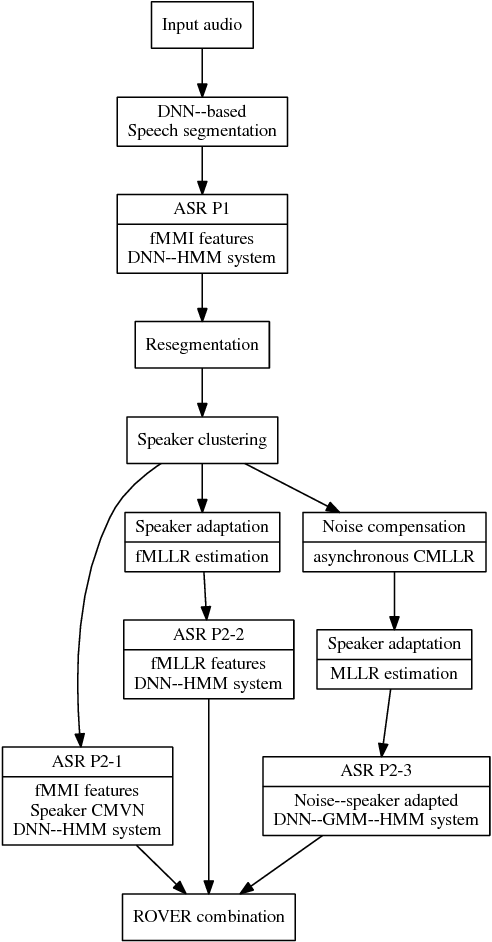 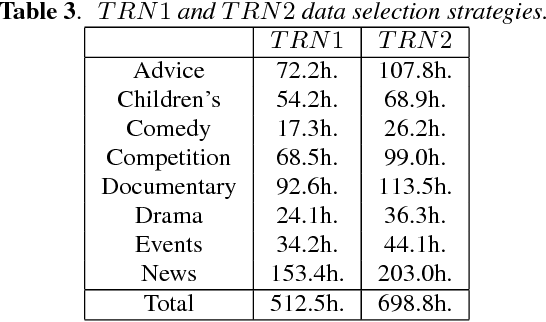 We describe the University of Sheffield system for participation in the 2015 Multi-Genre Broadcast (MGB) challenge task of transcribing multi-genre broadcast shows. Transcription was one of four tasks proposed in the MGB challenge, with the aim of advancing the state of the art of automatic speech recognition, speaker diarisation and automatic alignment of subtitles for broadcast media. Four topics are investigated in this work: Data selection techniques for training with unreliable data, automatic speech segmentation of broadcast media shows, acoustic modelling and adaptation in highly variable environments, and language modelling of multi-genre shows. The final system operates in multiple passes, using an initial unadapted decoding stage to refine segmentation, followed by three adapted passes: a hybrid DNN pass with input features normalised by speaker-based cepstral normalisation, another hybrid stage with input features normalised by speaker feature-MLLR transformations, and finally a bottleneck-based tandem stage with noise and speaker factorisation. The combination of these three system outputs provides a final error rate of 27.5% on the official development set, consisting of 47 multi-genre shows. 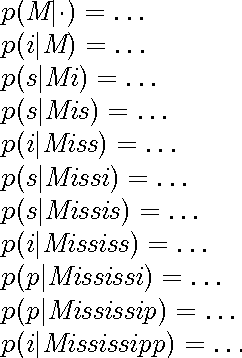 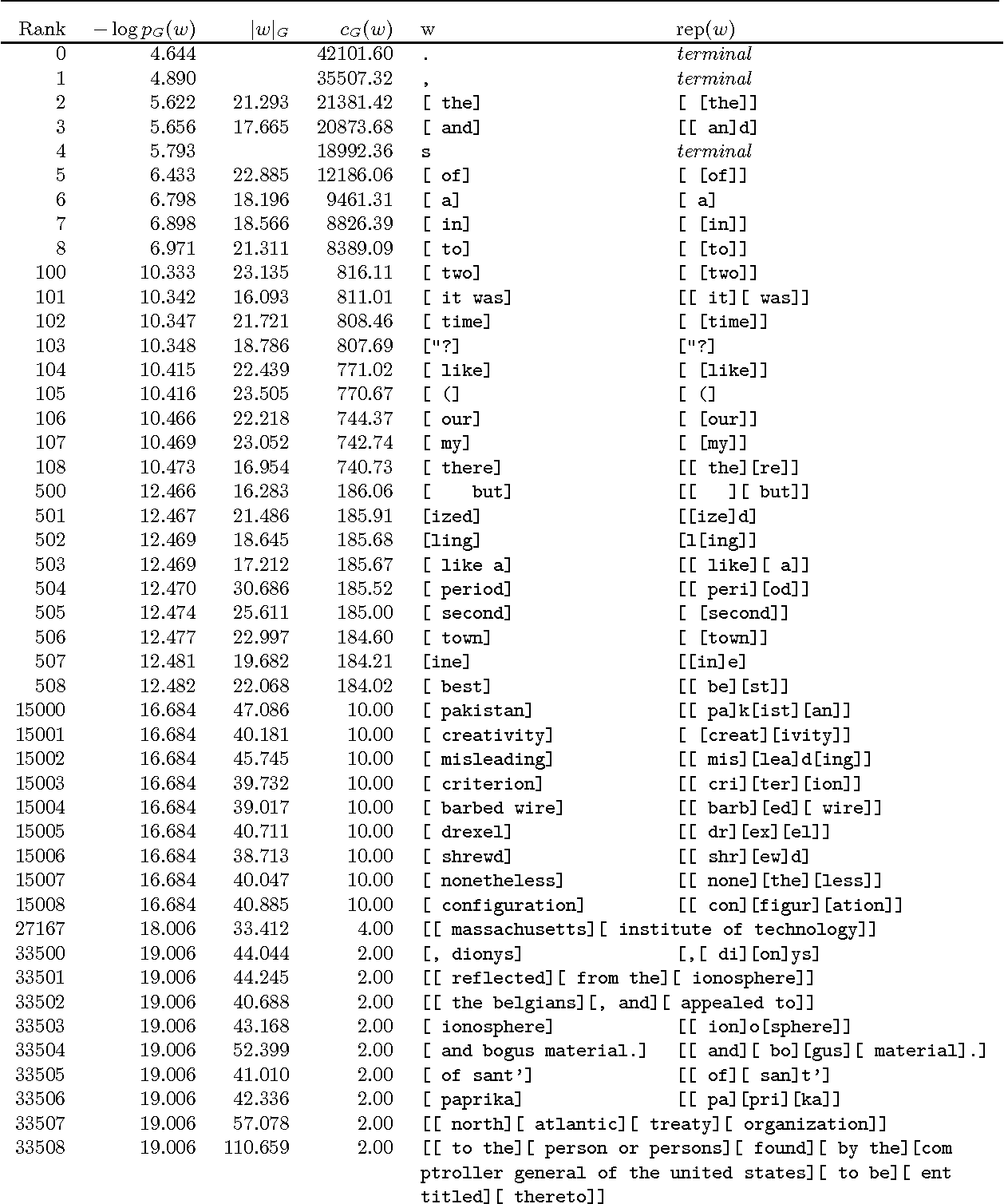 This thesis presents a computational theory of unsupervised language acquisition, precisely defining procedures for learning language from ordinary spoken or written utterances, with no explicit help from a teacher. The theory is based heavily on concepts borrowed from machine learning and statistical estimation. In particular, learning takes place by fitting a stochastic, generative model of language to the evidence. Much of the thesis is devoted to explaining conditions that must hold for this general learning strategy to arrive at linguistically desirable grammars. The thesis introduces a variety of technical innovations, among them a common representation for evidence and grammars, and a learning strategy that separates the ``content'' of linguistic parameters from their representation. Algorithms based on it suffer from few of the search problems that have plagued other computational approaches to language acquisition. The theory has been tested on problems of learning vocabularies and grammars from unsegmented text and continuous speech, and mappings between sound and representations of meaning. It performs extremely well on various objective criteria, acquiring knowledge that causes it to assign almost exactly the same structure to utterances as humans do. This work has application to data compression, language modeling, speech recognition, machine translation, information retrieval, and other tasks that rely on either structural or stochastic descriptions of language. 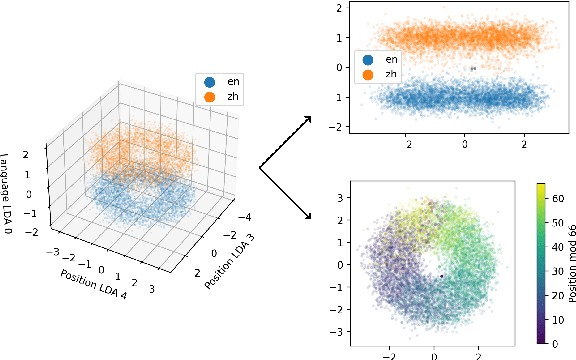 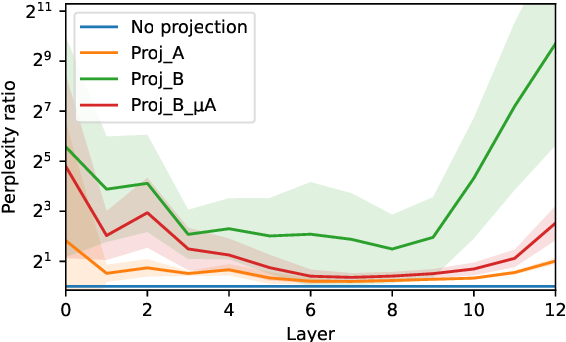 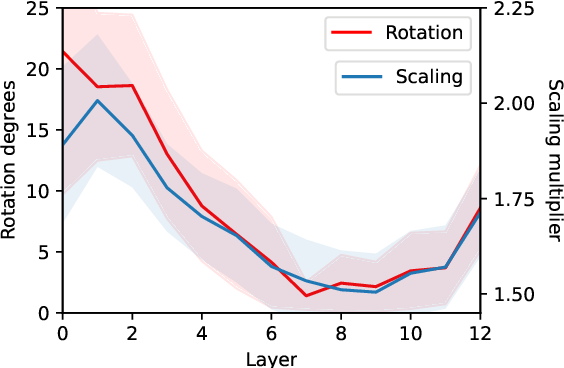 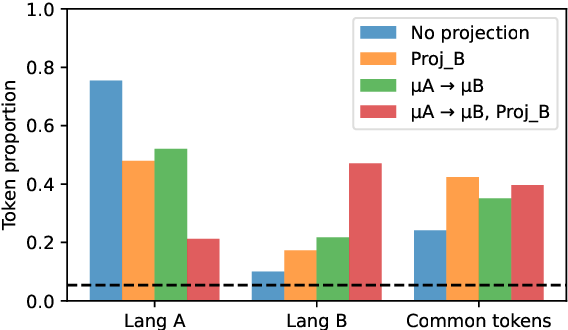 We assess how multilingual language models maintain a shared multilingual representation space while still encoding language-sensitive information in each language. Using XLM-R as a case study, we show that languages occupy similar linear subspaces after mean-centering, evaluated based on causal effects on language modeling performance and direct comparisons between subspaces for 88 languages. The subspace means differ along language-sensitive axes that are relatively stable throughout middle layers, and these axes encode information such as token vocabularies. Shifting representations by language means is sufficient to induce token predictions in different languages. However, we also identify stable language-neutral axes that encode information such as token positions and part-of-speech. We visualize representations projected onto language-sensitive and language-neutral axes, identifying language family and part-of-speech clusters, along with spirals, toruses, and curves representing token position information. These results demonstrate that multilingual language models encode information along orthogonal language-sensitive and language-neutral axes, allowing the models to extract a variety of features for downstream tasks and cross-lingual transfer learning. 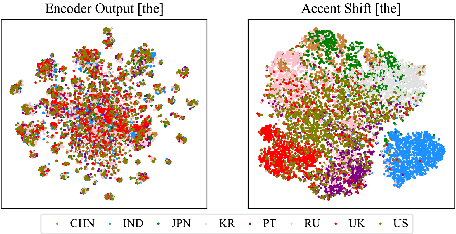 General accent recognition (AR) models tend to directly extract low-level information from spectrums, which always significantly overfit on speakers or channels. Considering accent can be regarded as a series of shifts relative to native pronunciation, distinguishing accents will be an easier task with accent shift as input. But due to the lack of native utterance as an anchor, estimating the accent shift is difficult. In this paper, we propose linguistic-acoustic similarity based accent shift (LASAS) for AR tasks. For an accent speech utterance, after mapping the corresponding text vector to multiple accent-associated spaces as anchors, its accent shift could be estimated by the similarities between the acoustic embedding and those anchors. Then, we concatenate the accent shift with a dimension-reduced text vector to obtain a linguistic-acoustic bimodal representation. Compared with pure acoustic embedding, the bimodal representation is richer and more clear by taking full advantage of both linguistic and acoustic information, which can effectively improve AR performance. Experiments on Accented English Speech Recognition Challenge (AESRC) dataset show that our method achieves 77.42% accuracy on Test set, obtaining a 6.94% relative improvement over a competitive system in the challenge.