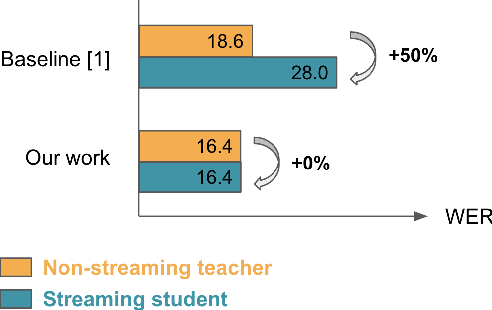 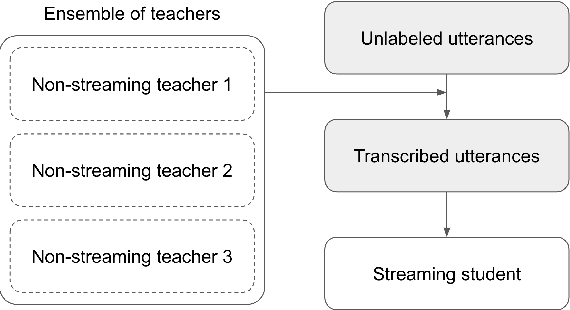 Streaming end-to-end automatic speech recognition (ASR) systems are widely used in everyday applications that require transcribing speech to text in real-time. Their minimal latency makes them suitable for such tasks. Unlike their non-streaming counterparts, streaming models are constrained to be causal with no future context and suffer from higher word error rates (WER). To improve streaming models, a recent study [1] proposed to distill a non-streaming teacher model on unsupervised utterances, and then train a streaming student using the teachers' predictions. However, the performance gap between teacher and student WERs remains high. In this paper, we aim to close this gap by using a diversified set of non-streaming teacher models and combining them using Recognizer Output Voting Error Reduction (ROVER). In particular, we show that, despite being weaker than RNN-T models, CTC models are remarkable teachers. Further, by fusing RNN-T and CTC models together, we build the strongest teachers. The resulting student models drastically improve upon streaming models of previous work [1]: the WER decreases by 41% on Spanish, 27% on Portuguese, and 13% on French.

AEC in a NetShell: On Target and Topology Choices for FCRN Acoustic Echo Cancellation 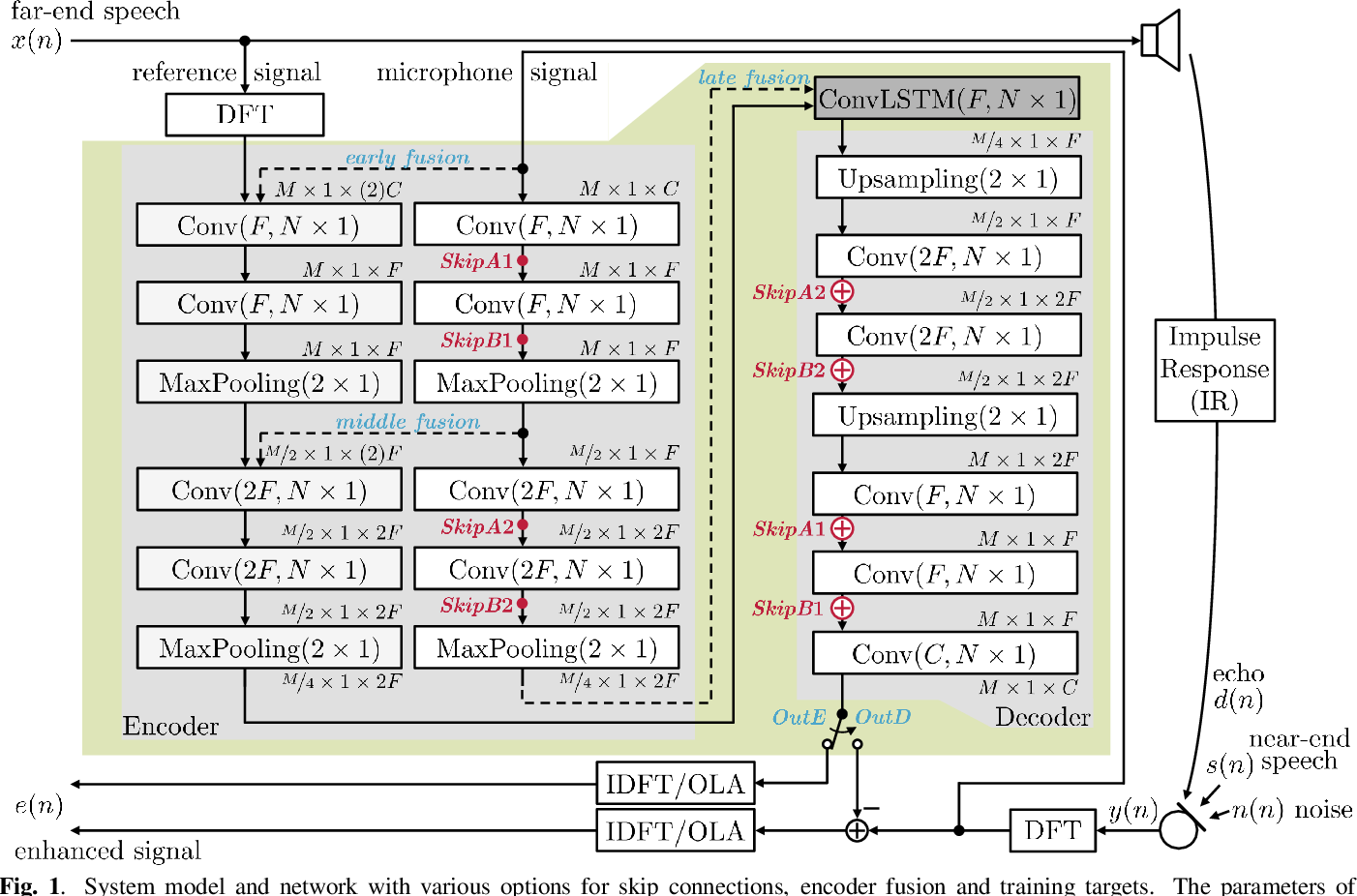 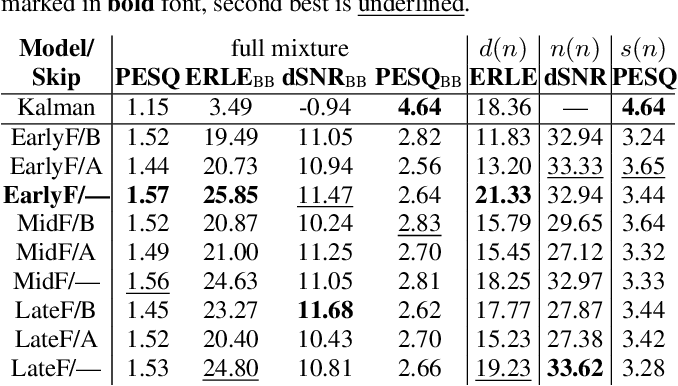 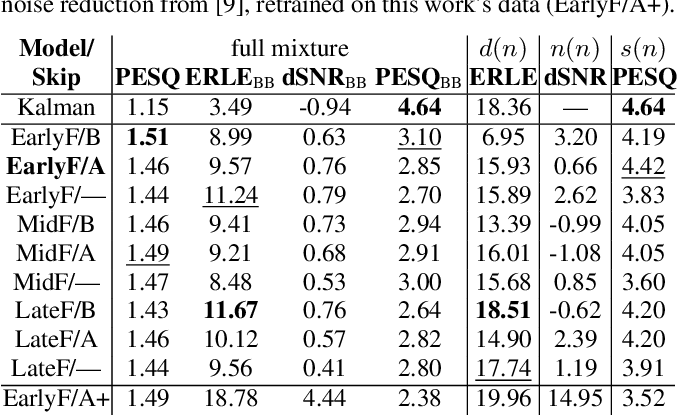 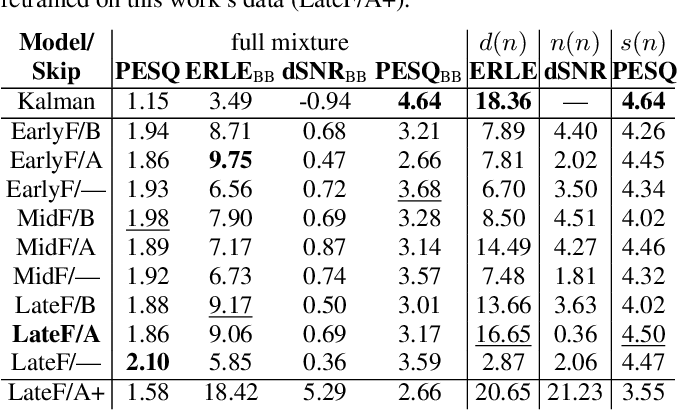 Acoustic echo cancellation (AEC) algorithms have a long-term steady role in signal processing, with approaches improving the performance of applications such as automotive hands-free systems, smart home and loudspeaker devices, or web conference systems. Just recently, very first deep neural network (DNN)-based approaches were proposed with a DNN for joint AEC and residual echo suppression (RES)/noise reduction, showing significant improvements in terms of echo suppression performance. Noise reduction algorithms, on the other hand, have enjoyed already a lot of attention with regard to DNN approaches, with the fully convolutional recurrent network (FCRN) architecture being among state of the art topologies. The recently published impressive echo cancellation performance of joint AEC/RES DNNs, however, so far came along with an undeniable impairment of speech quality. In this work we will heal this issue and significantly improve the near-end speech component quality over existing approaches. Also, we propose for the first time-to the best of our knowledge-a pure DNN AEC in the form of an echo estimator, that is based on a competitive FCRN structure and delivers a quality useful for practical applications.

VocGAN: A High-Fidelity Real-time Vocoder with a Hierarchically-nested Adversarial Network

We present a novel high-fidelity real-time neural vocoder called VocGAN. A recently developed GAN-based vocoder, MelGAN, produces speech waveforms in real-time. However, it often produces a waveform that is insufficient in quality or inconsistent with acoustic characteristics of the input mel spectrogram. VocGAN is nearly as fast as MelGAN, but it significantly improves the quality and consistency of the output waveform. VocGAN applies a multi-scale waveform generator and a hierarchically-nested discriminator to learn multiple levels of acoustic properties in a balanced way. It also applies the joint conditional and unconditional objective, which has shown successful results in high-resolution image synthesis. In experiments, VocGAN synthesizes speech waveforms 416.7x faster on a GTX 1080Ti GPU and 3.24x faster on a CPU than real-time. Compared with MelGAN, it also exhibits significantly improved quality in multiple evaluation metrics including mean opinion score (MOS) with minimal additional overhead. Additionally, compared with Parallel WaveGAN, another recently developed high-fidelity vocoder, VocGAN is 6.98x faster on a CPU and exhibits higher MOS.

CMIR-NET : A Deep Learning Based Model For Cross-Modal Retrieval In Remote Sensing 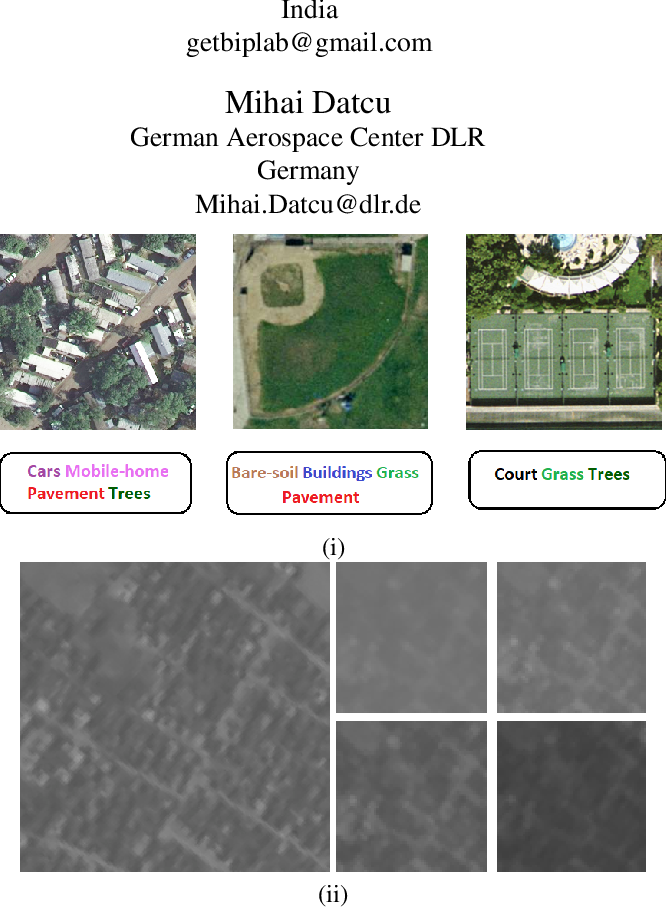 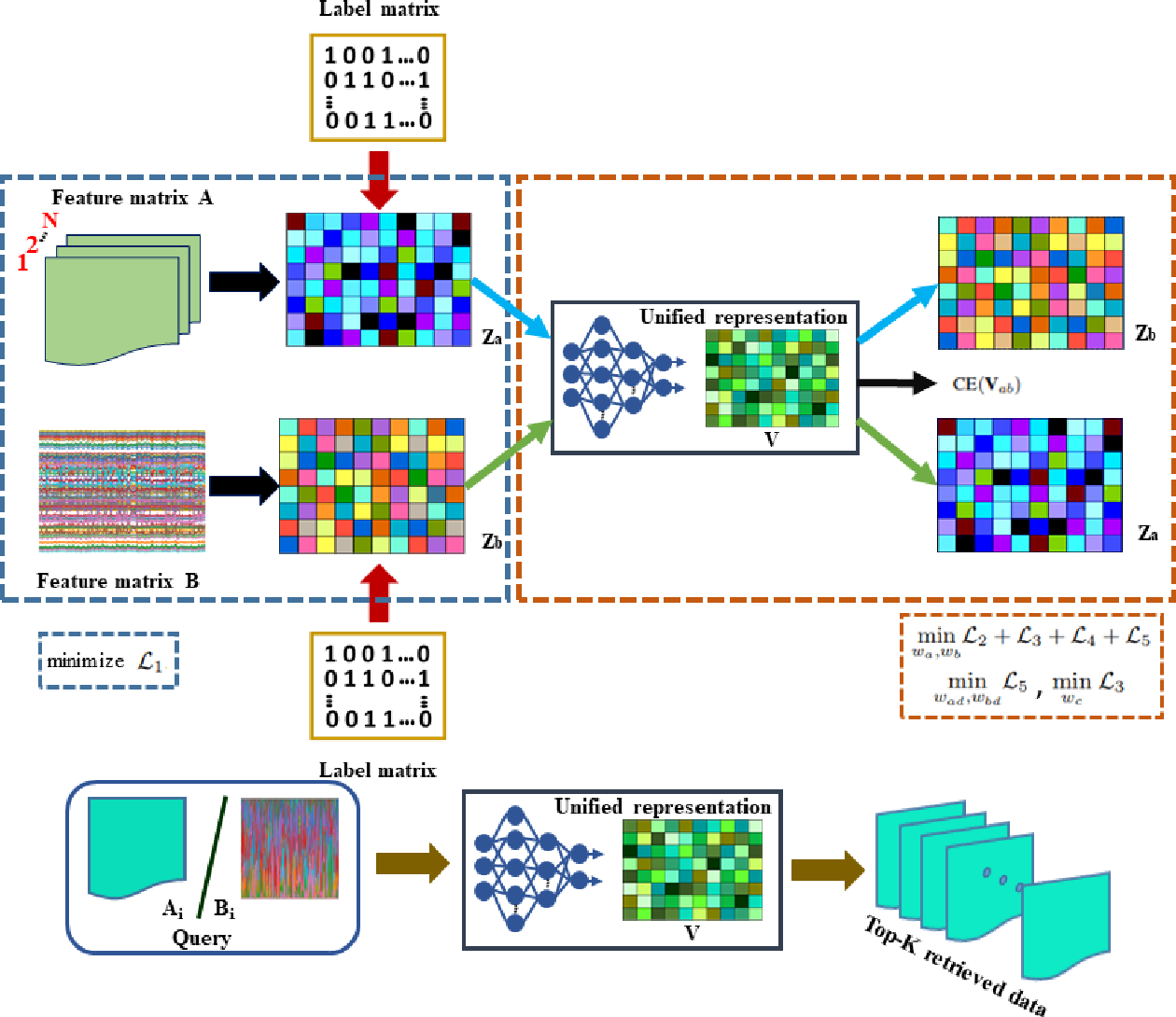 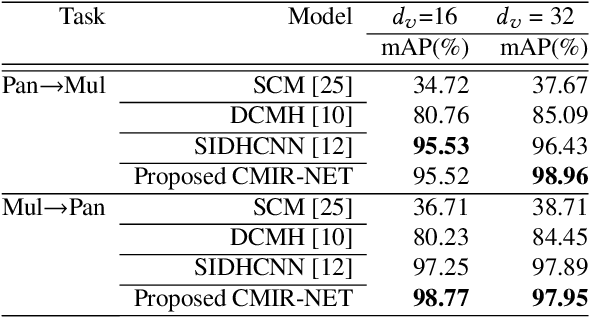 We address the problem of cross-modal information retrieval in the domain of remote sensing. In particular, we are interested in two application scenarios: i) cross-modal retrieval between panchromatic (PAN) and multi-spectral imagery, and ii) multi-label image retrieval between very high resolution (VHR) images and speech based label annotations. Notice that these multi-modal retrieval scenarios are more challenging than the traditional uni-modal retrieval approaches given the inherent differences in distributions between the modalities. However, with the growing availability of multi-source remote sensing data and the scarcity of enough semantic annotations, the task of multi-modal retrieval has recently become extremely important. In this regard, we propose a novel deep neural network based architecture which is considered to learn a discriminative shared feature space for all the input modalities, suitable for semantically coherent information retrieval. Extensive experiments are carried out on the benchmark large-scale PAN - multi-spectral DSRSID dataset and the multi-label UC-Merced dataset. Together with the Merced dataset, we generate a corpus of speech signals corresponding to the labels. Superior performance with respect to the current state-of-the-art is observed in all the cases. 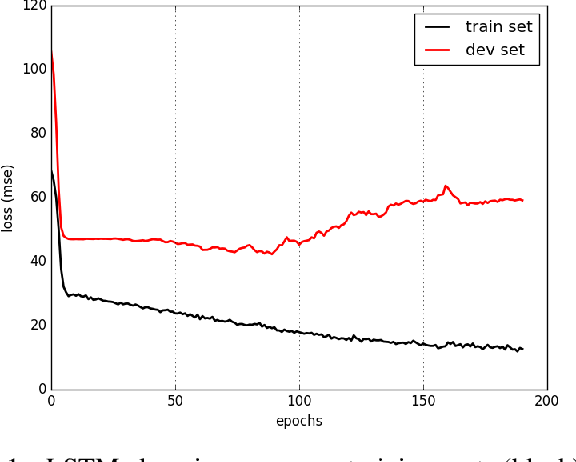 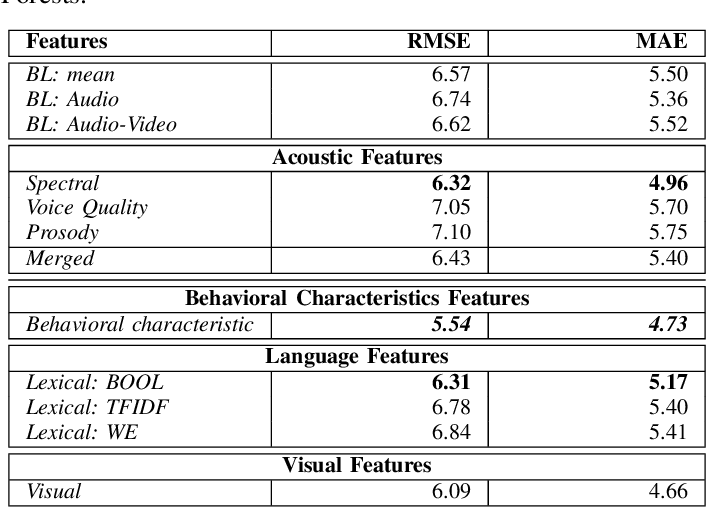 Depression is a major debilitating disorder which can affect people from all ages. With a continuous increase in the number of annual cases of depression, there is a need to develop automatic techniques for the detection of the presence and extent of depression. In this AVEC challenge we explore different modalities (speech, language and visual features extracted from face) to design and develop automatic methods for the detection of depression. In psychology literature, the PHQ-8 questionnaire is well established as a tool for measuring the severity of depression. In this paper we aim to automatically predict the PHQ-8 scores from features extracted from the different modalities. We show that visual features extracted from facial landmarks obtain the best performance in terms of estimating the PHQ-8 results with a mean absolute error (MAE) of 4.66 on the development set. Behavioral characteristics from speech provide an MAE of 4.73. Language features yield a slightly higher MAE of 5.17. When switching to the test set, our Turn Features derived from audio transcriptions achieve the best performance, scoring an MAE of 4.11 (corresponding to an RMSE of 4.94), which makes our system the winner of the AVEC 2017 depression sub-challenge. 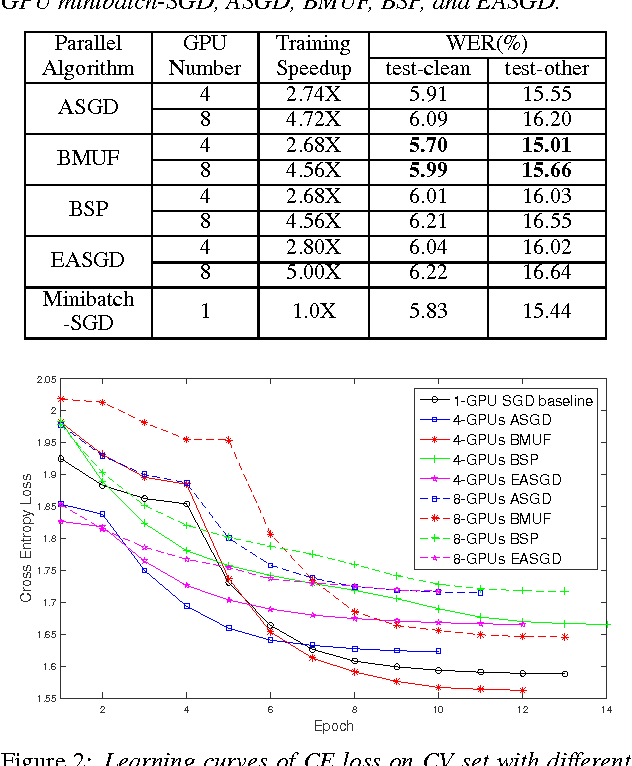 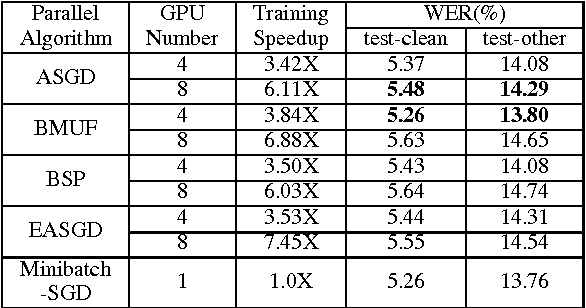 Deep learning models (DLMs) are state-of-the-art techniques in speech recognition. However, training good DLMs can be time consuming especially for production-size models and corpora. Although several parallel training algorithms have been proposed to improve training efficiency, there is no clear guidance on which one to choose for the task in hand due to lack of systematic and fair comparison among them. In this paper we aim at filling this gap by comparing four popular parallel training algorithms in speech recognition, namely asynchronous stochastic gradient descent (ASGD), blockwise model-update filtering (BMUF), bulk synchronous parallel (BSP) and elastic averaging stochastic gradient descent (EASGD), on 1000-hour LibriSpeech corpora using feed-forward deep neural networks (DNNs) and convolutional, long short-term memory, DNNs (CLDNNs). Based on our experiments, we recommend using BMUF as the top choice to train acoustic models since it is most stable, scales well with number of GPUs, can achieve reproducible results, and in many cases even outperforms single-GPU SGD. ASGD can be used as a substitute in some cases. 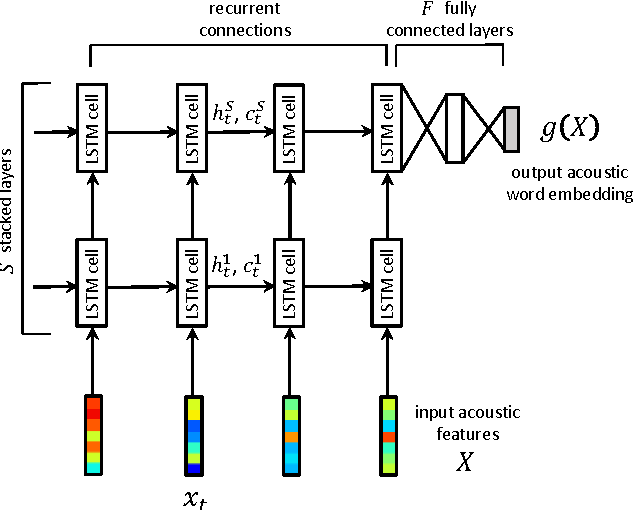 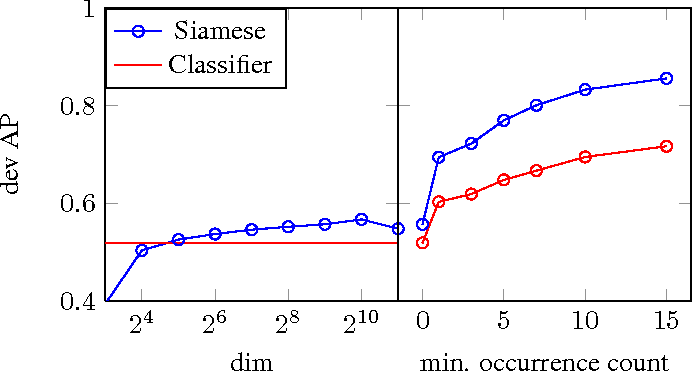 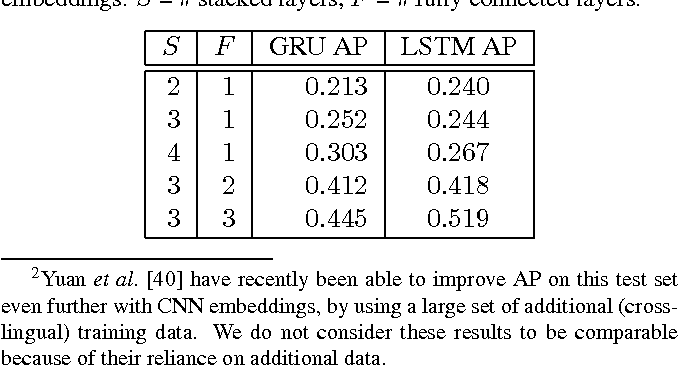 Acoustic word embeddings --- fixed-dimensional vector representations of variable-length spoken word segments --- have begun to be considered for tasks such as speech recognition and query-by-example search. Such embeddings can be learned discriminatively so that they are similar for speech segments corresponding to the same word, while being dissimilar for segments corresponding to different words. Recent work has found that acoustic word embeddings can outperform dynamic time warping on query-by-example search and related word discrimination tasks. However, the space of embedding models and training approaches is still relatively unexplored. In this paper we present new discriminative embedding models based on recurrent neural networks (RNNs). We consider training losses that have been successful in prior work, in particular a cross entropy loss for word classification and a contrastive loss that explicitly aims to separate same-word and different-word pairs in a "Siamese network" training setting. We find that both classifier-based and Siamese RNN embeddings improve over previously reported results on a word discrimination task, with Siamese RNNs outperforming classification models. In addition, we present analyses of the learned embeddings and the effects of variables such as dimensionality and network structure. 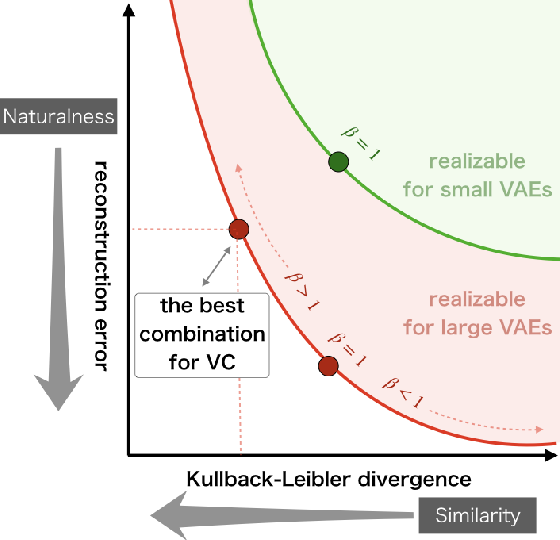 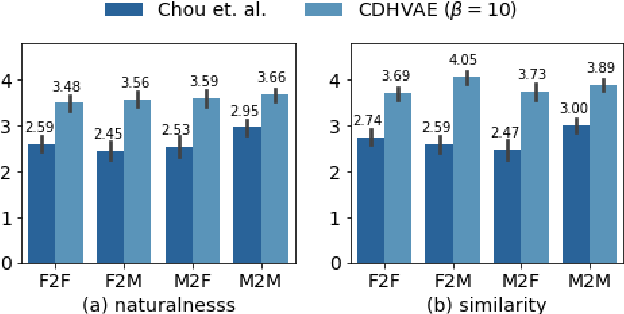 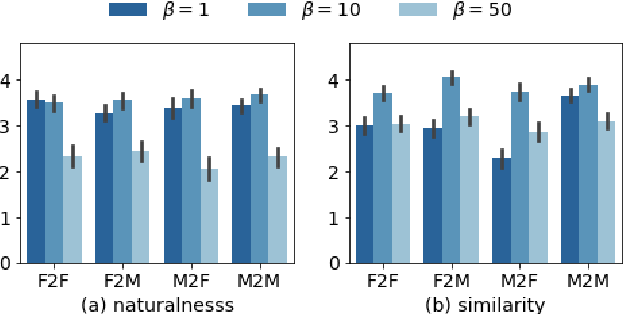 Variational autoencoder-based voice conversion (VAE-VC) has the advantage of requiring only pairs of speeches and speaker labels for training. Unlike the majority of the research in VAE-VC which focuses on utilizing auxiliary losses or discretizing latent variables, this paper investigates how an increasing model expressiveness has benefits and impacts on the VAE-VC. Specifically, we first analyze VAE-VC from a rate-distortion perspective, and point out that model expressiveness is significant for VAE-VC because rate and distortion reflect similarity and naturalness of converted speeches. Based on the analysis, we propose a novel VC method using a deep hierarchical VAE, which has high model expressiveness as well as having fast conversion speed thanks to its non-autoregressive decoder. Also, our analysis reveals another problem that similarity can be degraded when the latent variable of VAEs has redundant information. We address the problem by controlling the information contained in the latent variable using $\beta$-VAE objective. In the experiment using VCTK corpus, the proposed method achieved mean opinion scores higher than 3.5 on both naturalness and similarity in inter-gender settings, which are higher than the scores of existing autoencoder-based VC methods. 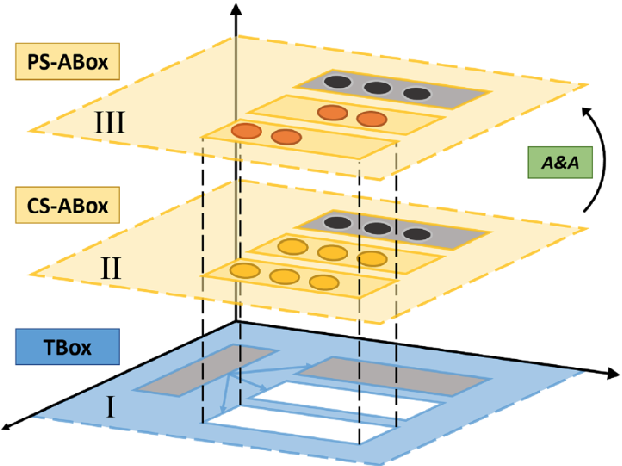 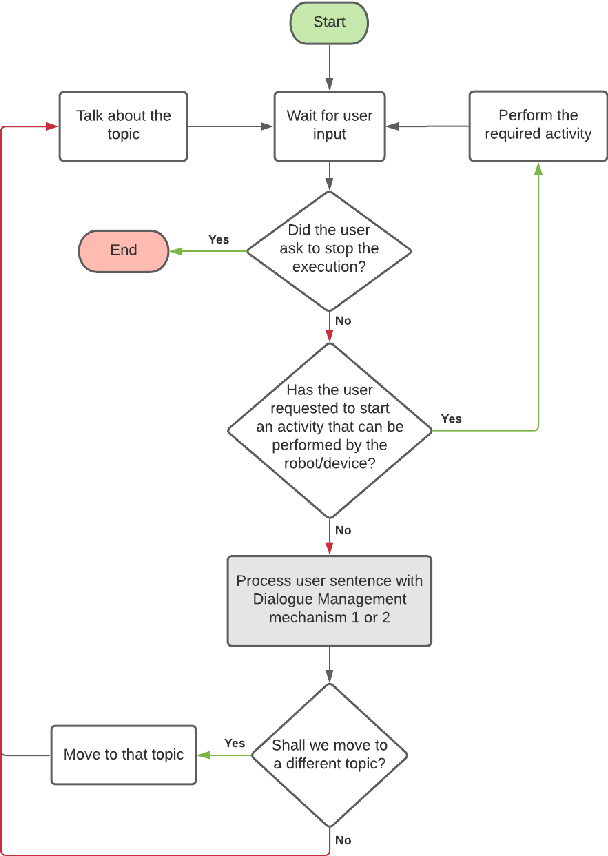 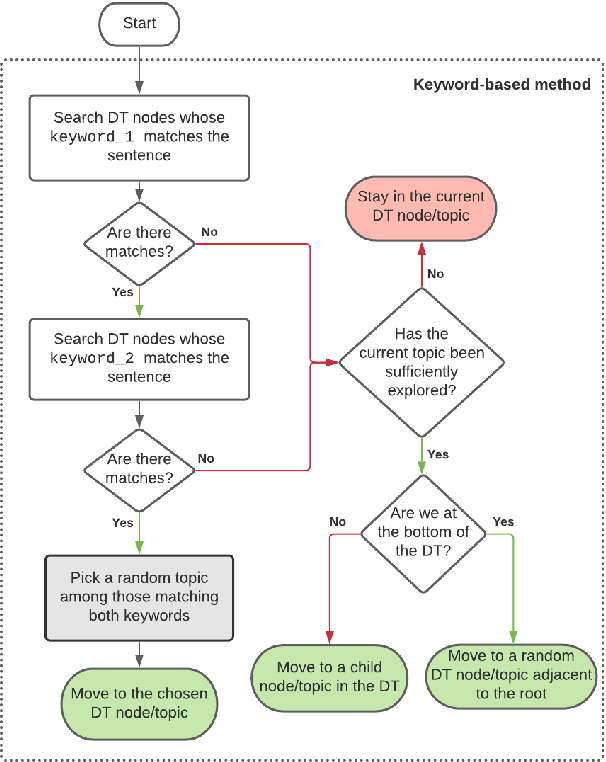 The article proposes a system for knowledge-based conversation designed for Social Robots and other conversational agents. The proposed system relies on an Ontology for the description of all concepts that may be relevant conversation topics, as well as their mutual relationships. The article focuses on the algorithm for Dialogue Management that selects the most appropriate conversation topic depending on the user's input. Moreover, it discusses strategies to ensure a conversation flow that captures, as more coherently as possible, the user's intention to drive the conversation in specific directions while avoiding purely reactive responses to what the user says. To measure the quality of the conversation, the article reports the tests performed with 100 recruited participants, comparing five conversational agents: (i) an agent addressing dialogue flow management based only on the detection of keywords in the speech, (ii) an agent based both on the detection of keywords and the Content Classification feature of Google Cloud Natural Language, (iii) an agent that picks conversation topics randomly, (iv) a human pretending to be a chatbot, and (v) one of the most famous chatbots worldwide: Replika. The subjective perception of the participants is measured both with the SASSI (Subjective Assessment of Speech System Interfaces) tool, as well as with a custom survey for measuring the subjective perception of coherence.