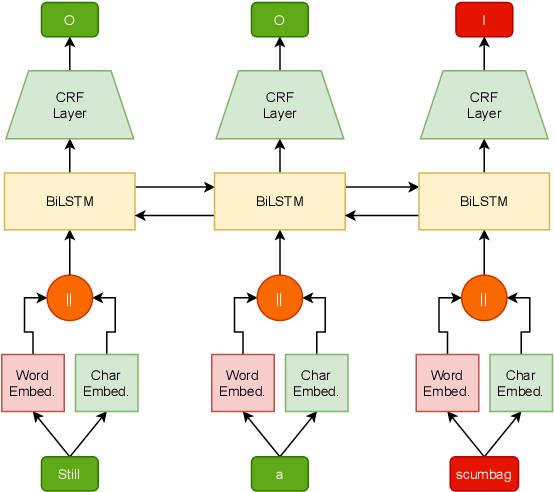 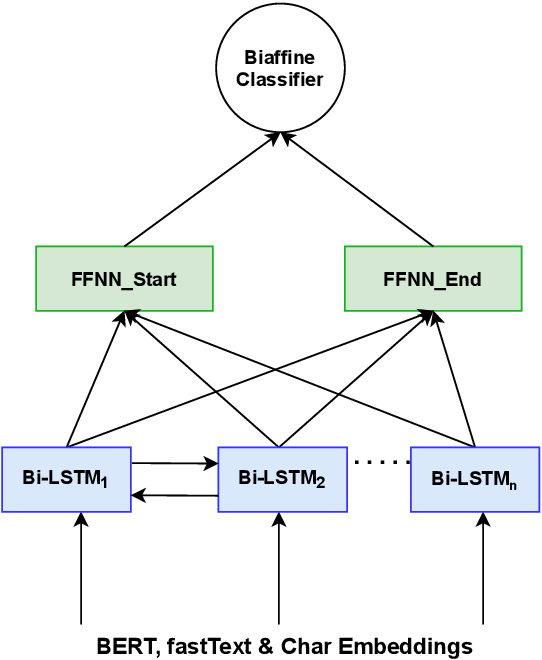 Social network platforms are generally used to share positive, constructive, and insightful content. However, in recent times, people often get exposed to objectionable content like threat, identity attacks, hate speech, insults, obscene texts, offensive remarks or bullying. Existing work on toxic speech detection focuses on binary classification or on differentiating toxic speech among a small set of categories. This paper describes the system proposed by team Cisco for SemEval-2021 Task 5: Toxic Spans Detection, the first shared task focusing on detecting the spans in the text that attribute to its toxicity, in English language. We approach this problem primarily in two ways: a sequence tagging approach and a dependency parsing approach. In our sequence tagging approach we tag each token in a sentence under a particular tagging scheme. Our best performing architecture in this approach also proved to be our best performing architecture overall with an F1 score of 0.6922, thereby placing us 7th on the final evaluation phase leaderboard. We also explore a dependency parsing approach where we extract spans from the input sentence under the supervision of target span boundaries and rank our spans using a biaffine model. Finally, we also provide a detailed analysis of our results and model performance in our paper. 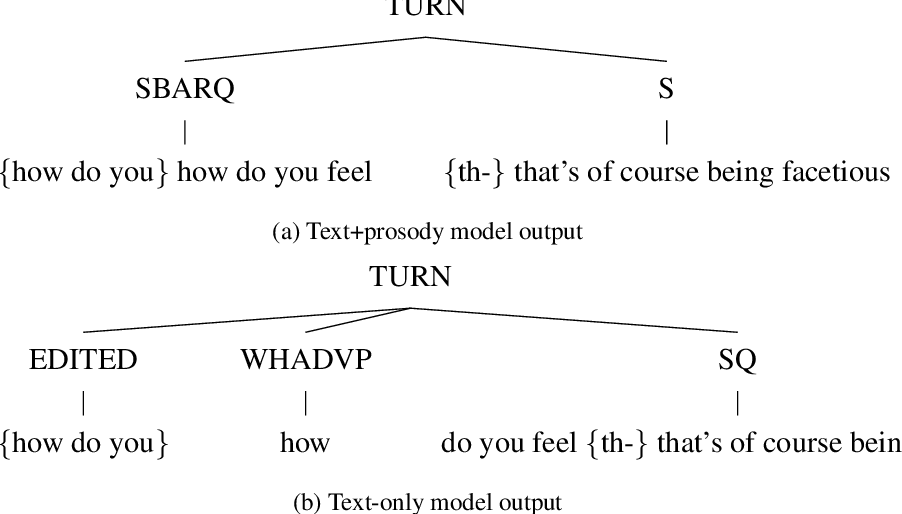 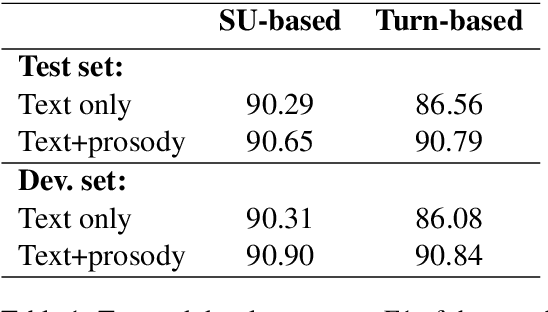 Parsing spoken dialogue poses unique difficulties, including disfluencies and unmarked boundaries between sentence-like units. Previous work has shown that prosody can help with parsing disfluent speech (Tran et al. 2018), but has assumed that the input to the parser is already segmented into sentence-like units (SUs), which isn't true in existing speech applications. We investigate how prosody affects a parser that receives an entire dialogue turn as input (a turn-based model), instead of gold standard pre-segmented SUs (an SU-based model). In experiments on the English Switchboard corpus, we find that when using transcripts alone, the turn-based model has trouble segmenting SUs, leading to worse parse performance than the SU-based model. However, prosody can effectively replace gold standard SU boundaries: with prosody, the turn-based model performs as well as the SU-based model (90.79 vs. 90.65 F1 score, respectively), despite performing two tasks (SU segmentation and parsing) rather than one (parsing alone). Analysis shows that pitch and intensity features are the most important for this corpus, since they allow the model to correctly distinguish an SU boundary from a speech disfluency -- a distinction that the model otherwise struggles to make. 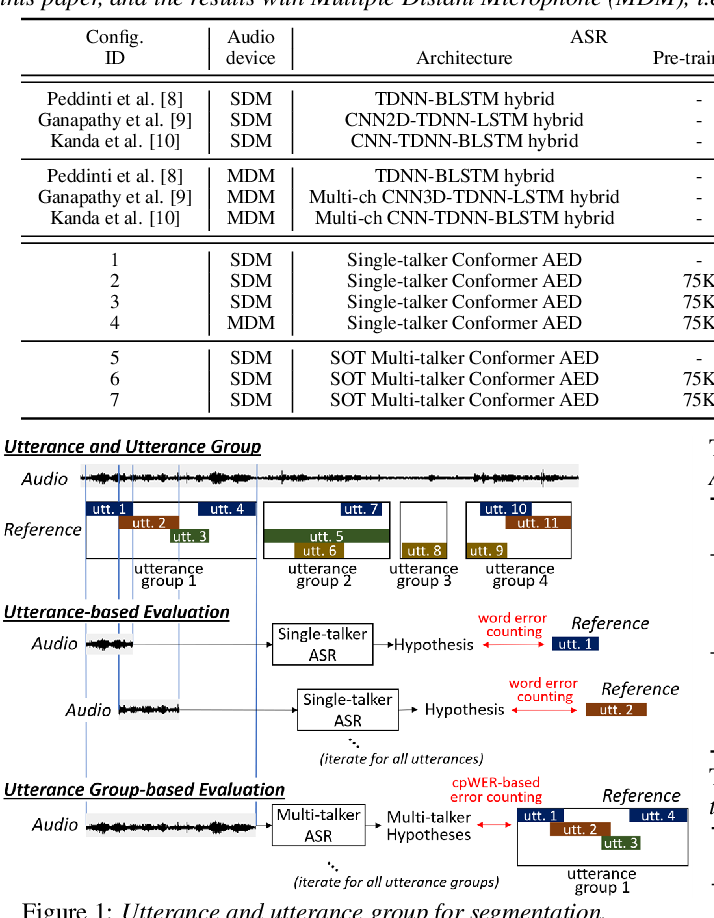 Transcribing meetings containing overlapped speech with only a single distant microphone (SDM) has been one of the most challenging problems for automatic speech recognition (ASR). While various approaches have been proposed, all previous studies on the monaural overlapped speech recognition problem were based on either simulation data or small-scale real data. In this paper, we extensively investigate a two-step approach where we first pre-train a serialized output training (SOT)-based multi-talker ASR by using large-scale simulation data and then fine-tune the model with a small amount of real meeting data. Experiments are conducted by utilizing 75 thousand (K) hours of our internal single-talker recording to simulate a total of 900K hours of multi-talker audio segments for supervised pre-training. With fine-tuning on the 70 hours of the AMI-SDM training data, our SOT ASR model achieves a word error rate (WER) of 21.2% for the AMI-SDM evaluation set while automatically counting speakers in each test segment. This result is not only significantly better than the previous state-of-the-art WER of 36.4% with oracle utterance boundary information but also better than a result by a similarly fine-tuned single-talker ASR model applied to beamformed audio. 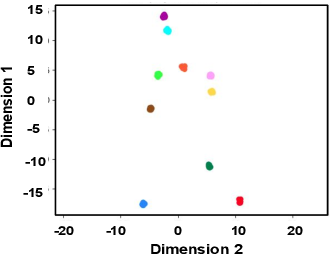 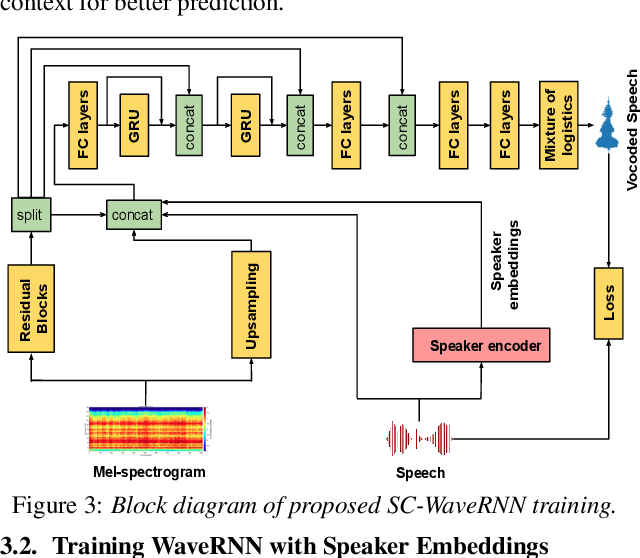 Recent advancements in deep learning led to human-level performance in single-speaker speech synthesis. However, there are still limitations in terms of speech quality when generalizing those systems into multiple-speaker models especially for unseen speakers and unseen recording qualities. For instance, conventional neural vocoders are adjusted to the training speaker and have poor generalization capabilities to unseen speakers. In this work, we propose a variant of WaveRNN, referred to as speaker conditional WaveRNN (SC-WaveRNN). We target towards the development of an efficient universal vocoder even for unseen speakers and recording conditions. In contrast to standard WaveRNN, SC-WaveRNN exploits additional information given in the form of speaker embeddings. Using publicly-available data for training, SC-WaveRNN achieves significantly better performance over baseline WaveRNN on both subjective and objective metrics. In MOS, SC-WaveRNN achieves an improvement of about 23% for seen speaker and seen recording condition and up to 95% for unseen speaker and unseen condition. Finally, we extend our work by implementing a multi-speaker text-to-speech (TTS) synthesis similar to zero-shot speaker adaptation. In terms of performance, our system has been preferred over the baseline TTS system by 60% over 15.5% and by 60.9% over 32.6%, for seen and unseen speakers, respectively. 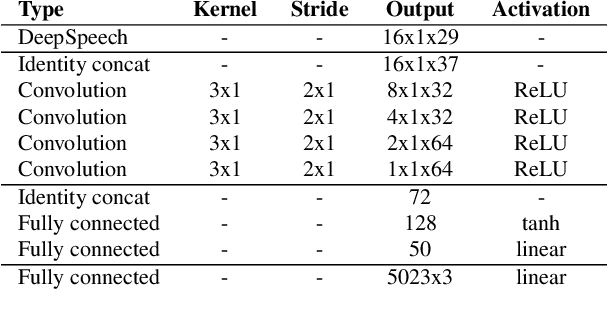 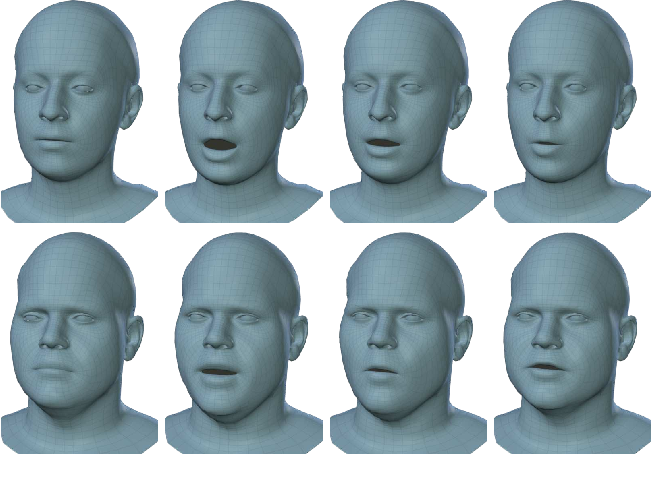 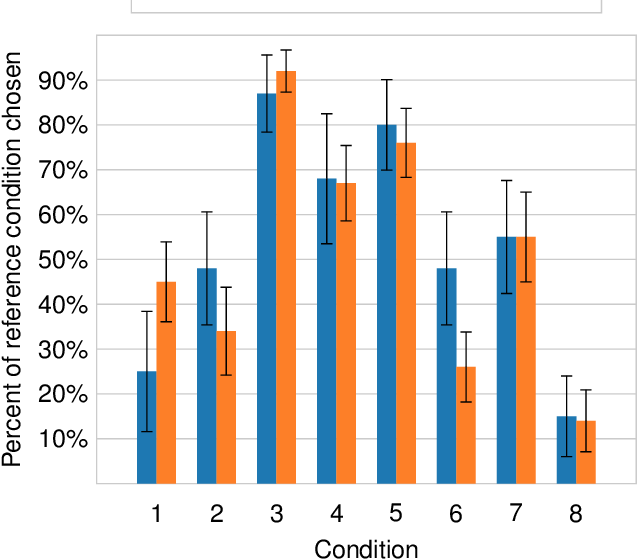 Audio-driven 3D facial animation has been widely explored, but achieving realistic, human-like performance is still unsolved. This is due to the lack of available 3D datasets, models, and standard evaluation metrics. To address this, we introduce a unique 4D face dataset with about 29 minutes of 4D scans captured at 60 fps and synchronized audio from 12 speakers. We then train a neural network on our dataset that factors identity from facial motion. The learned model, VOCA (Voice Operated Character Animation) takes any speech signal as input - even speech in languages other than English - and realistically animates a wide range of adult faces. Conditioning on subject labels during training allows the model to learn a variety of realistic speaking styles. VOCA also provides animator controls to alter speaking style, identity-dependent facial shape, and pose (i.e. head, jaw, and eyeball rotations) during animation. To our knowledge, VOCA is the only realistic 3D facial animation model that is readily applicable to unseen subjects without retargeting. This makes VOCA suitable for tasks like in-game video, virtual reality avatars, or any scenario in which the speaker, speech, or language is not known in advance. We make the dataset and model available for research purposes at http://voca.is.tue.mpg.de. 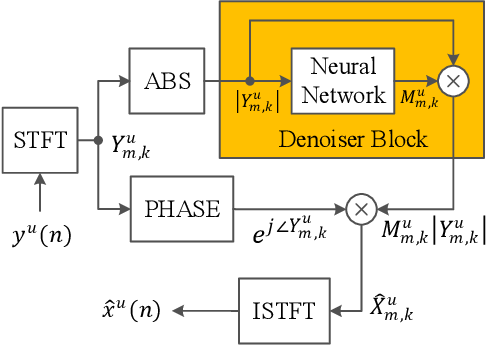 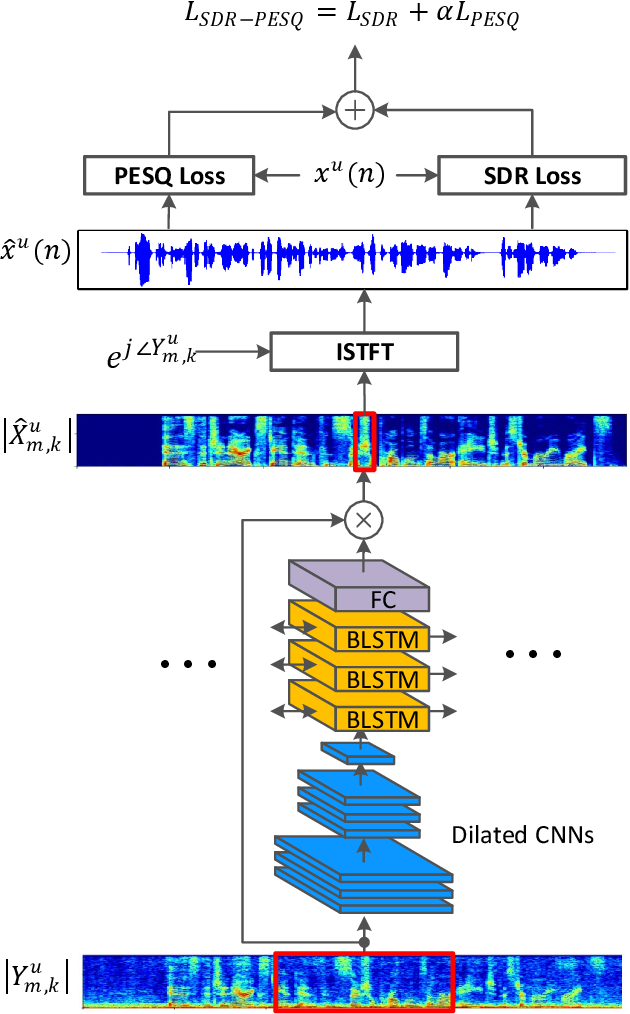 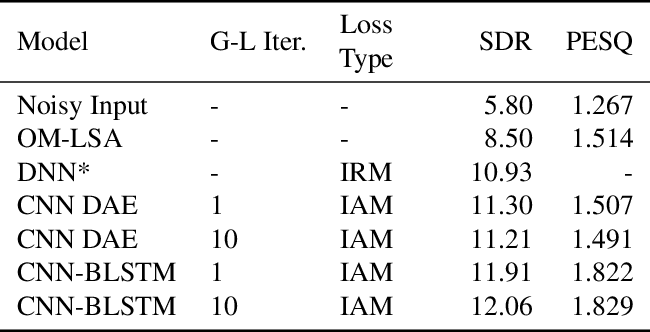 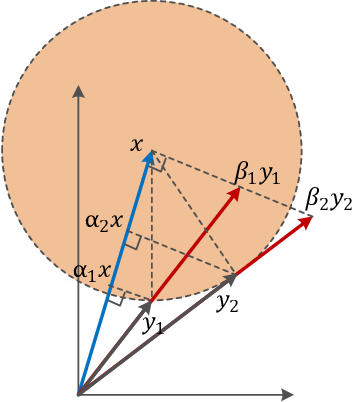 Supervised learning based on a deep neural network recently has achieved substantial improvement on speech enhancement. Denoising networks learn mapping from noisy speech to clean one directly, or to a spectra mask which is the ratio between clean and noisy spectrum. In either case, the network is optimized by minimizing mean square error (MSE) between predefined labels and network output of spectra or time-domain signal. However, existing schemes have either of two critical issues: spectra and metric mismatches. The spectra mismatch is a well known issue that any spectra modification after short-time Fourier transform (STFT), in general, cannot be fully recovered after inverse STFT. The metric mismatch is that a conventional MSE metric is sub-optimal to maximize our target metrics, signal-to-distortion ratio (SDR) and perceptual evaluation of speech quality (PESQ). This paper presents a new end-to-end denoising framework with the goal of joint SDR and PESQ optimization. First, the network optimization is performed on the time-domain signals after ISTFT to avoid spectra mismatch. Second, two loss functions which have improved correlations with SDR and PESQ metrics are proposed to minimize metric mismatch. The experimental result showed that the proposed denoising scheme significantly improved both SDR and PESQ performance over the existing methods. 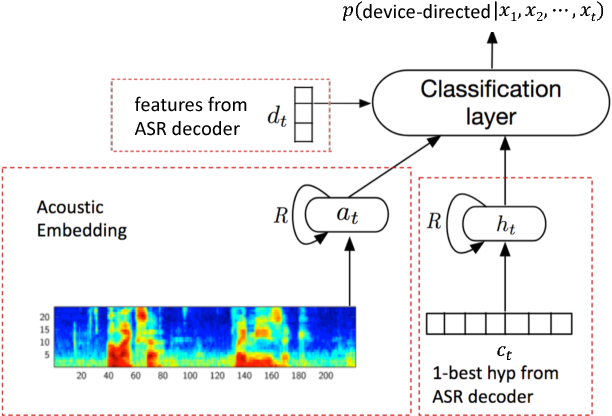 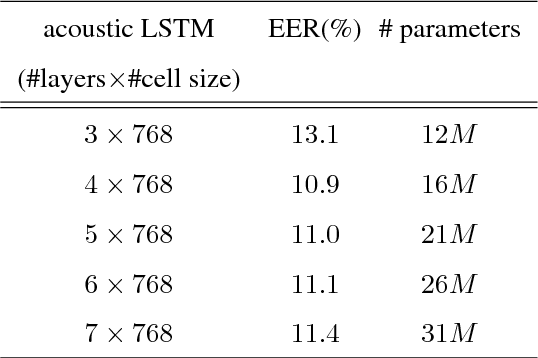 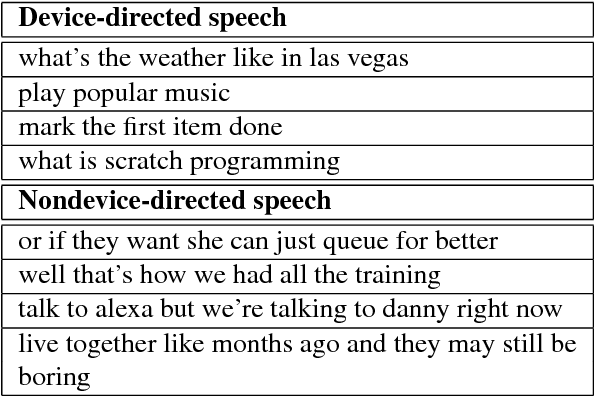 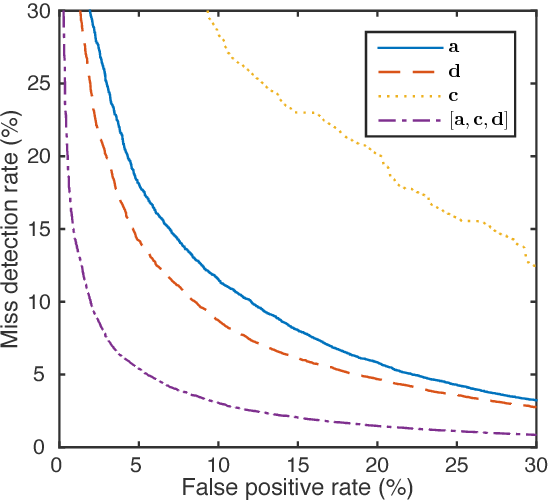 In this work, we propose a classifier for distinguishing device-directed queries from background speech in the context of interactions with voice assistants. Applications include rejection of false wake-ups or unintended interactions as well as enabling wake-word free follow-up queries. Consider the example interaction: $"Computer,~play~music", "Computer,~reduce~the~volume"$. In this interaction, the user needs to repeat the wake-word ($Computer$) for the second query. To allow for more natural interactions, the device could immediately re-enter listening state after the first query (without wake-word repetition) and accept or reject a potential follow-up as device-directed or background speech. The proposed model consists of two long short-term memory (LSTM) neural networks trained on acoustic features and automatic speech recognition (ASR) 1-best hypotheses, respectively. A feed-forward deep neural network (DNN) is then trained to combine the acoustic and 1-best embeddings, derived from the LSTMs, with features from the ASR decoder. Experimental results show that ASR decoder, acoustic embeddings, and 1-best embeddings yield an equal-error-rate (EER) of $9.3~\%$, $10.9~\%$ and $20.1~\%$, respectively. Combination of the features resulted in a $44~\%$ relative improvement and a final EER of $5.2~\%$. 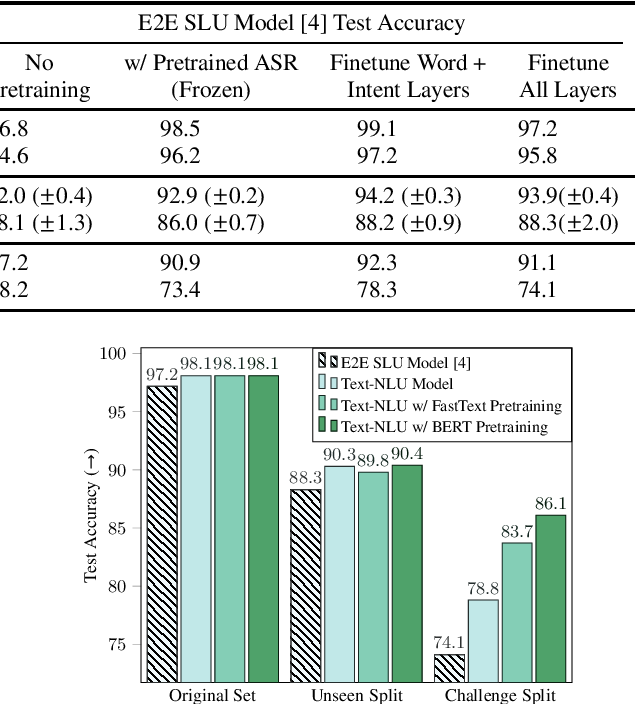 Decomposable tasks are complex and comprise of a hierarchy of sub-tasks. Spoken intent prediction, for example, combines automatic speech recognition and natural language understanding. Existing benchmarks, however, typically hold out examples for only the surface-level sub-task. As a result, models with similar performance on these benchmarks may have unobserved performance differences on the other sub-tasks. To allow insightful comparisons between competitive end-to-end architectures, we propose a framework to construct robust test sets using coordinate ascent over sub-task specific utility functions. Given a dataset for a decomposable task, our method optimally creates a test set for each sub-task to individually assess sub-components of the end-to-end model. Using spoken language understanding as a case study, we generate new splits for the Fluent Speech Commands and Snips SmartLights datasets. Each split has two test sets: one with held-out utterances assessing natural language understanding abilities, and one with held-out speakers to test speech processing skills. Our splits identify performance gaps up to 10% between end-to-end systems that were within 1% of each other on the original test sets. These performance gaps allow more realistic and actionable comparisons between different architectures, driving future model development. We release our splits and tools for the community.