Recent work has explored sequence-to-sequence latent variable models for expressive speech synthesis (supporting control and transfer of prosody and style), but has not presented a coherent framework for understanding the trade-offs between the competing methods. In this paper, we propose embedding capacity as a unified method of analyzing the behavior of latent variable models of speech, comparing existing heuristic (non-variational) methods to variational methods that are able to explicitly constrain capacity using an upper bound on representational mutual information. In our proposed model, we show that by adding conditional dependencies to the variational posterior such that it matches the form of the true posterior, the same model can be used for high-precision prosody transfer, text-agnostic style transfer, and generation of natural-sounding prior samples. For multi-speaker models, the proposed model is able to preserve target speaker identity during inter-speaker prosody transfer and when drawing samples from the latent prior. Lastly, we introduce a method for decomposing embedding capacity hierarchically across two sets of latents, allowing a portion of the latent variability to be specified and the remaining variability sampled from a learned prior. 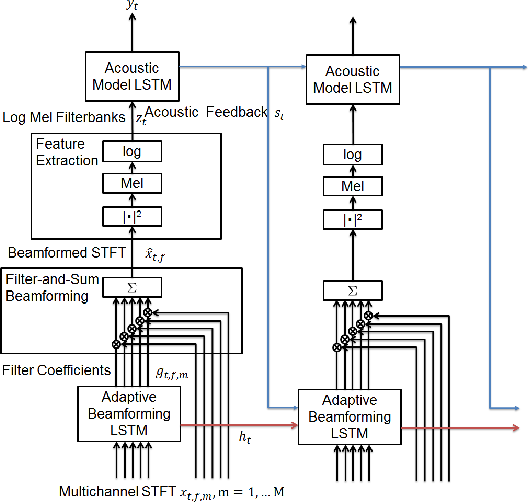 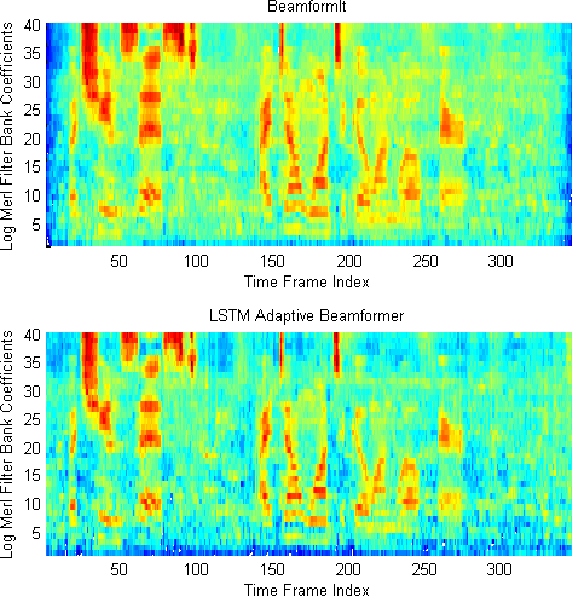 Far-field speech recognition in noisy and reverberant conditions remains a challenging problem despite recent deep learning breakthroughs. This problem is commonly addressed by acquiring a speech signal from multiple microphones and performing beamforming over them. In this paper, we propose to use a recurrent neural network with long short-term memory (LSTM) architecture to adaptively estimate real-time beamforming filter coefficients to cope with non-stationary environmental noise and dynamic nature of source and microphones positions which results in a set of timevarying room impulse responses. The LSTM adaptive beamformer is jointly trained with a deep LSTM acoustic model to predict senone labels. Further, we use hidden units in the deep LSTM acoustic model to assist in predicting the beamforming filter coefficients. The proposed system achieves 7.97% absolute gain over baseline systems with no beamforming on CHiME-3 real evaluation set. 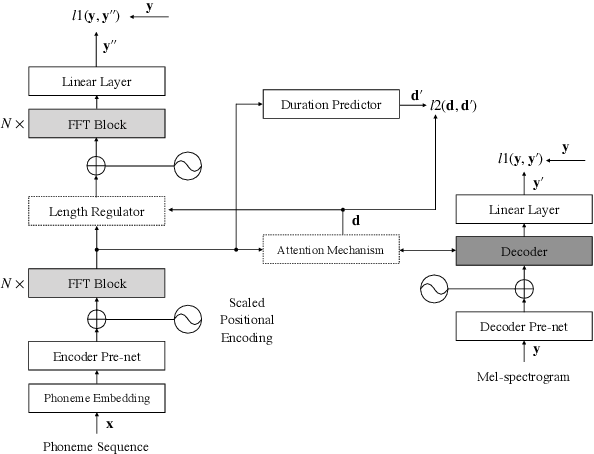 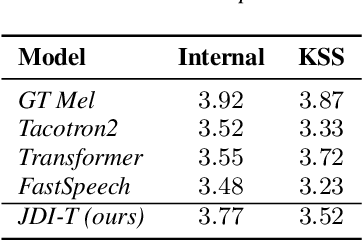 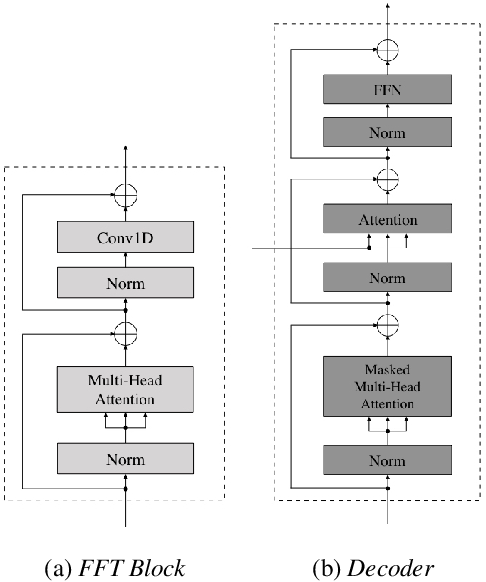 We propose Jointly trained Duration Informed Transformer (JDI-T), a feed-forward Transformer with a duration predictor jointly trained without explicit alignments in order to generate an acoustic feature sequence from an input text. In this work, inspired by the recent success of the duration informed networks such as FastSpeech and DurIAN, we further simplify its sequential, two-stage training pipeline to a single-stage training. Specifically, we extract the phoneme duration from the autoregressive Transformer on the fly during the joint training instead of pretraining the autoregressive model and using it as a phoneme duration extractor. To our best knowledge, it is the first implementation to jointly train the feed-forward Transformer without relying on a pre-trained phoneme duration extractor in a single training pipeline. We evaluate the effectiveness of the proposed model on the publicly available Korean Single speaker Speech (KSS) dataset compared to the baseline text-to-speech (TTS) models trained by ESPnet-TTS. 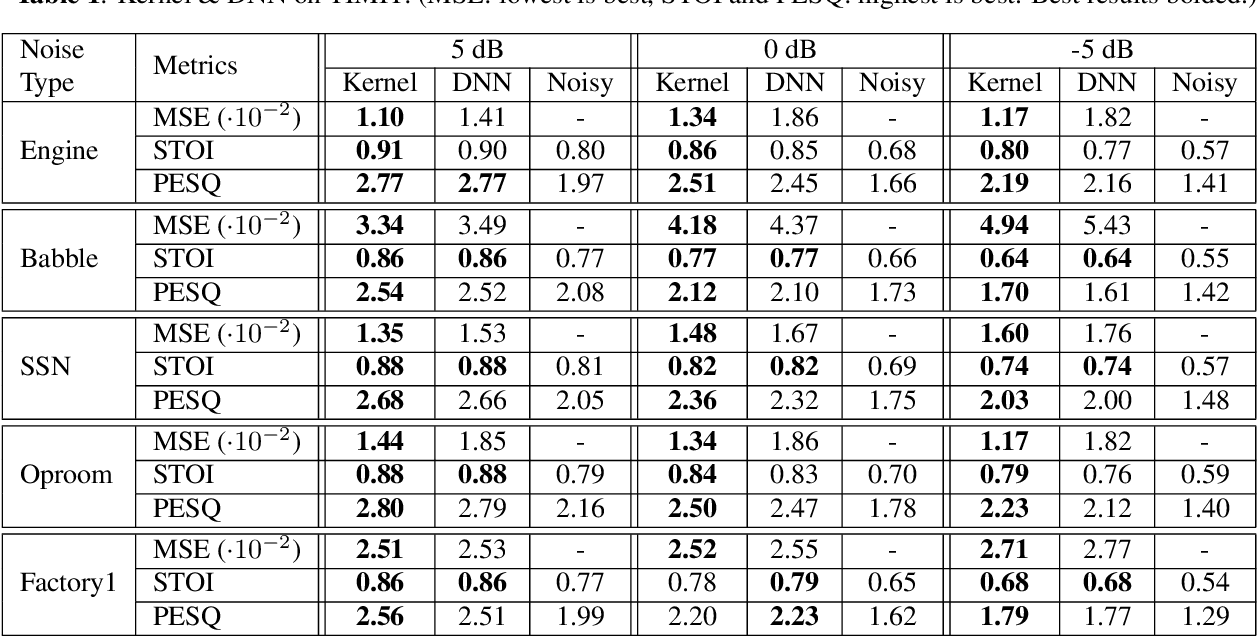 We apply a fast kernel method for mask-based single-channel speech enhancement. Specifically, our method solves a kernel regression problem associated to a non-smooth kernel function (exponential power kernel) with a highly efficient iterative method (EigenPro). Due to the simplicity of this method, its hyper-parameters such as kernel bandwidth can be automatically and efficiently selected using line search with subsamples of training data. We observe an empirical correlation between the regression loss (mean square error) and regular metrics for speech enhancement. This observation justifies our training target and motivates us to achieve lower regression loss by training separate kernel model per frequency subband. We compare our method with the state-of-the-art deep neural networks on mask-based HINT and TIMIT. Experimental results show that our kernel method consistently outperforms deep neural networks while requiring less training time. 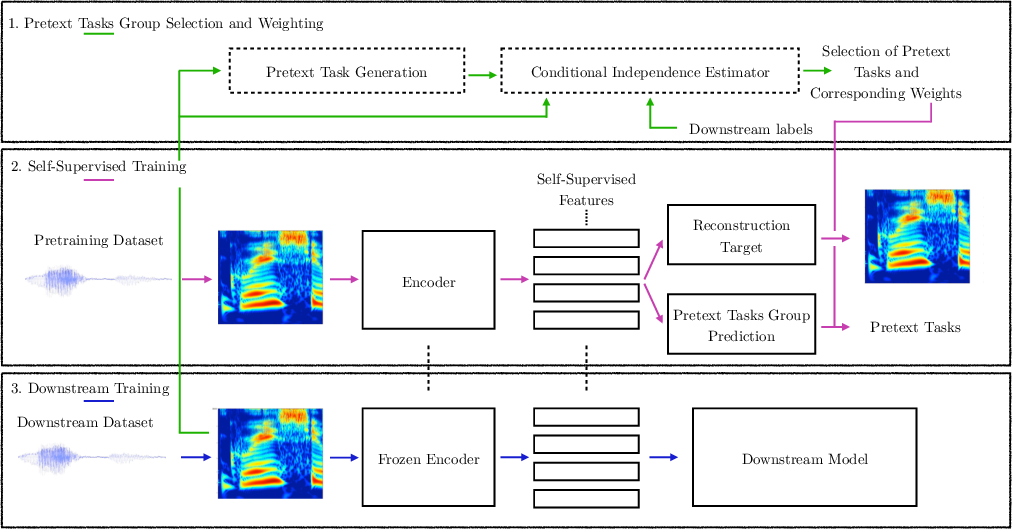 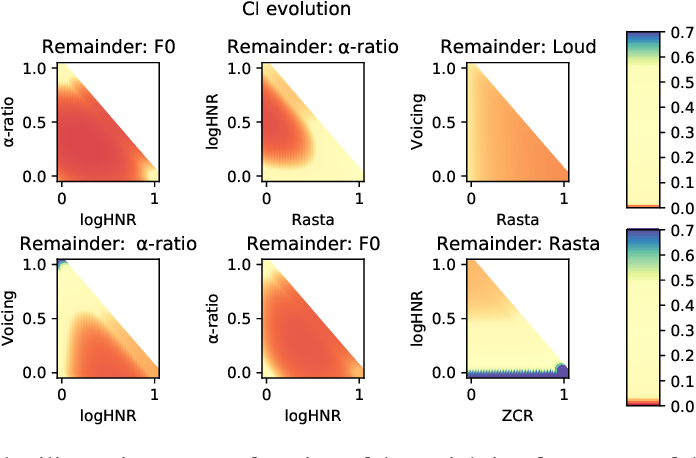 Through solving pretext tasks, self-supervised learning leverages unlabeled data to extract useful latent representations replacing traditional input features in the downstream task. In various application domains, including computer vision, natural language processing and audio/speech signal processing, a wide range of features where engineered through decades of research efforts. As it turns out, learning to predict such features has proven to be a particularly relevant pretext task leading to building useful self-supervised representations that prove to be effective for downstream tasks. However, methods and common practices for combining such pretext tasks, where each task targets a different group of features for better performance on the downstream task have not been explored and understood properly. In fact, the process relies almost exclusively on a computationally heavy experimental procedure, which becomes intractable with the increase of the number of pretext tasks. This paper introduces a method to select a group of pretext tasks among a set of candidates. The method we propose estimates properly calibrated weights for the partial losses corresponding to the considered pretext tasks during the self-supervised training process. The experiments conducted on speaker recognition and automatic speech recognition validate our approach, as the groups selected and weighted with our method perform better than classic baselines, thus facilitating the selection and combination of relevant pseudo-labels for self-supervised representation learning. 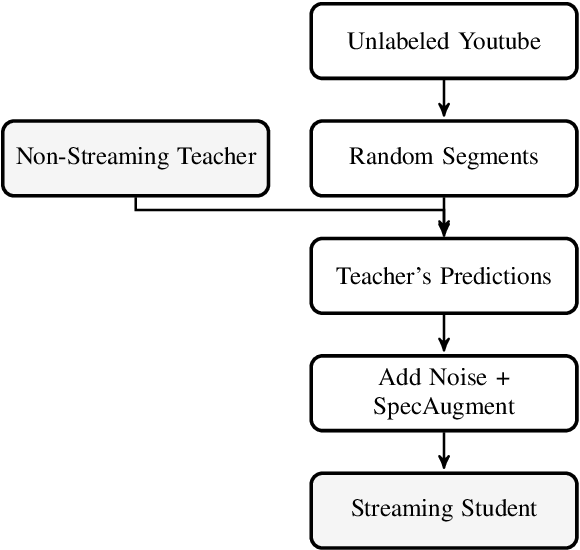 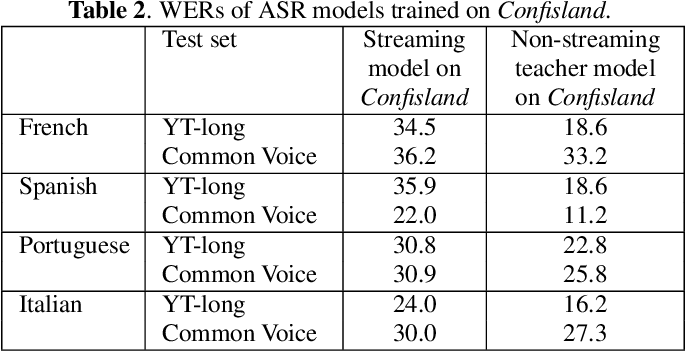 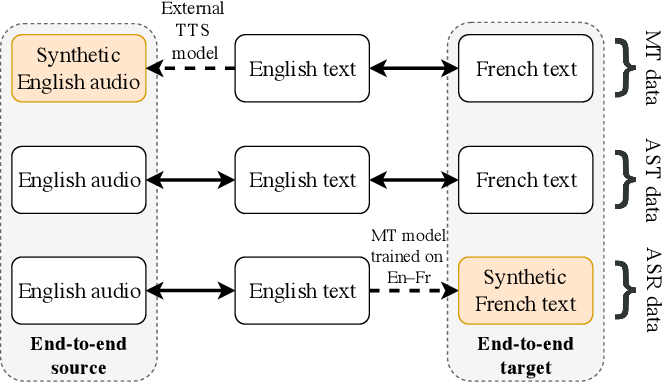 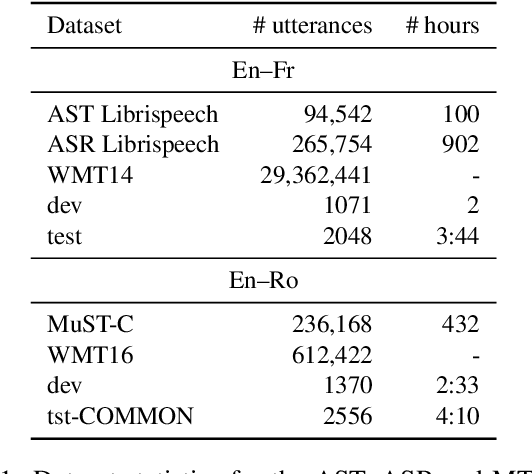 For automatic speech translation (AST), end-to-end approaches are outperformed by cascaded models that transcribe with automatic speech recognition (ASR), then translate with machine translation (MT). A major cause of the performance gap is that, while existing AST corpora are small, massive datasets exist for both the ASR and MT subsystems. In this work, we evaluate several data augmentation and pretraining approaches for AST, by comparing all on the same datasets. Simple data augmentation by translating ASR transcripts proves most effective on the English--French augmented LibriSpeech dataset, closing the performance gap from 8.2 to 1.4 BLEU, compared to a very strong cascade that could directly utilize copious ASR and MT data. The same end-to-end approach plus fine-tuning closes the gap on the English--Romanian MuST-C dataset from 6.7 to 3.7 BLEU. In addition to these results, we present practical recommendations for augmentation and pretraining approaches. Finally, we decrease the performance gap to 0.01 BLEU using a Transformer-based architecture. 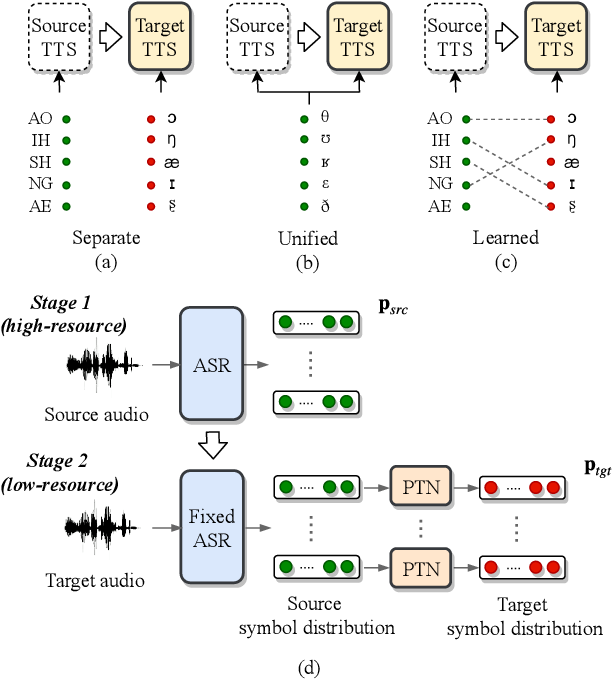 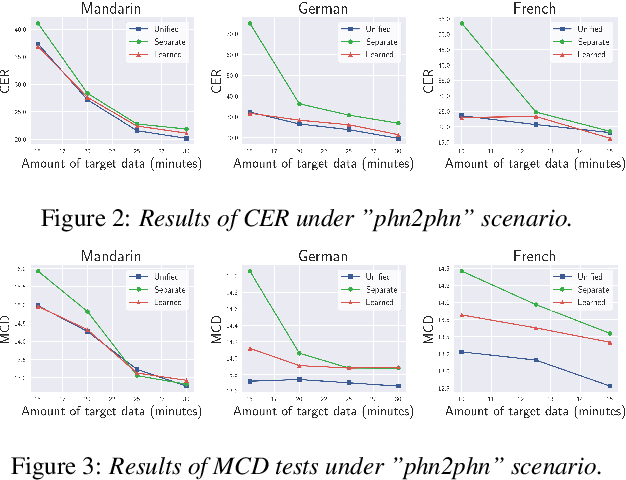 End-to-end text-to-speech (TTS) has shown great success on large quantities of paired text plus speech data. However, laborious data collection remains difficult for at least 95% of the languages over the world, which hinders the development of TTS in different languages. In this paper, we aim to build TTS systems for such low-resource (target) languages where only very limited paired data are available. We show such TTS can be effectively constructed by transferring knowledge from a high-resource (source) language. Since the model trained on source language cannot be directly applied to target language due to input space mismatch, we propose a method to learn a mapping between source and target linguistic symbols. Benefiting from this learned mapping, pronunciation information can be preserved throughout the transferring procedure. Preliminary experiments show that we only need around 15 minutes of paired data to obtain a relatively good TTS system. Furthermore, analytic studies demonstrated that the automatically discovered mapping correlate well with the phonetic expertise. 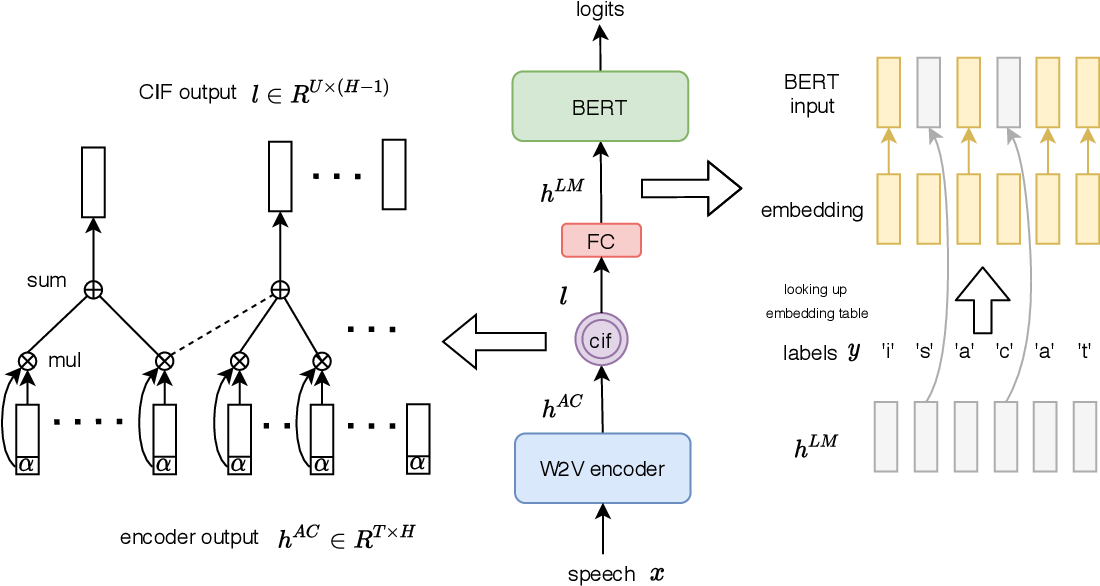 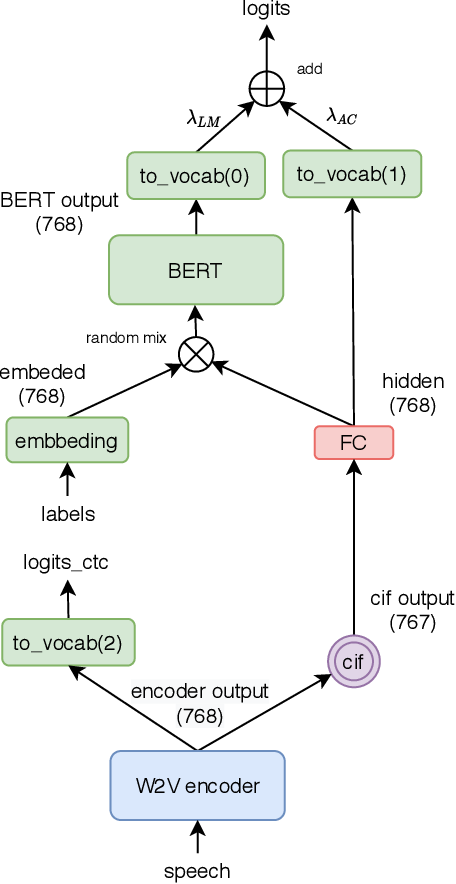 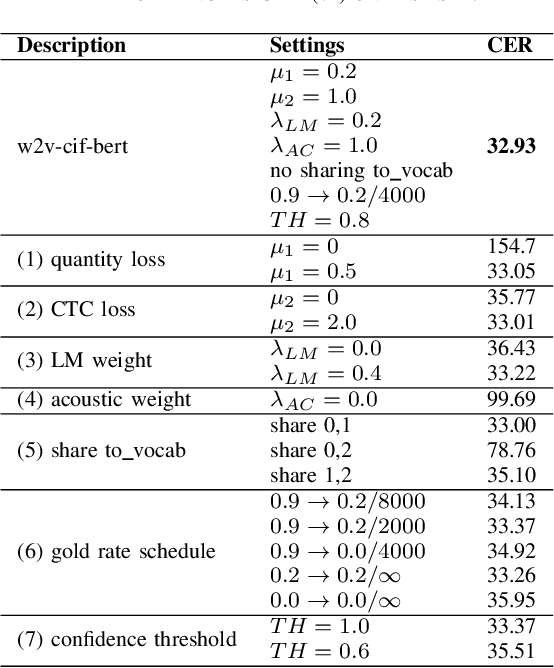 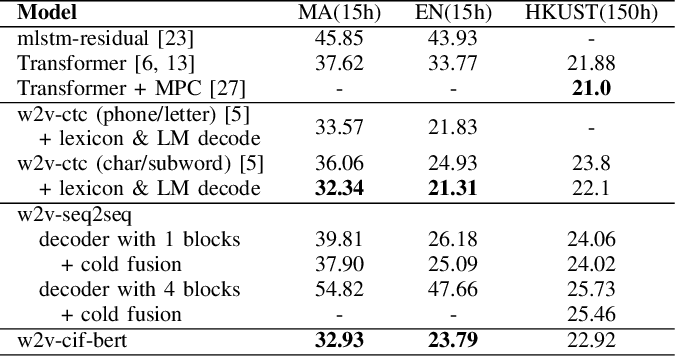 End-to-end models have achieved impressive results on the task of automatic speech recognition (ASR). For low-resource ASR tasks, however, labeled data can hardly satisfy the demand of end-to-end models. Self-supervised acoustic pre-training has already shown its amazing ASR performance, while the transcription is still inadequate for language modeling in end-to-end models. In this work, we fuse a pre-trained acoustic encoder (wav2vec2.0) and a pre-trained linguistic encoder (BERT) into an end-to-end ASR model. The fused model only needs to learn the transfer from speech to language during fine-tuning on limited labeled data. The length of the two modalities is matched by a monotonic attention mechanism without additional parameters. Besides, a fully connected layer is introduced for the hidden mapping between modalities. We further propose a scheduled fine-tuning strategy to preserve and utilize the text context modeling ability of the pre-trained linguistic encoder. Experiments show our effective utilizing of pre-trained modules. Our model achieves better recognition performance on CALLHOME corpus (15 hours) than other end-to-end models. 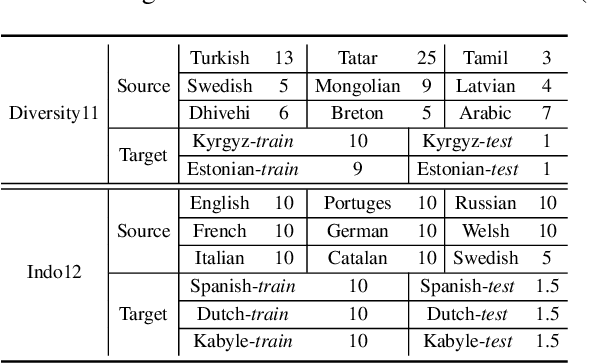 Low-resource automatic speech recognition (ASR) is challenging, as the low-resource target language data cannot well train an ASR model. To solve this issue, meta-learning formulates ASR for each source language into many small ASR tasks and meta-learns a model initialization on all tasks from different source languages to access fast adaptation on unseen target languages. However, for different source languages, the quantity and difficulty vary greatly because of their different data scales and diverse phonological systems, which leads to task-quantity and task-difficulty imbalance issues and thus a failure of multilingual meta-learning ASR (MML-ASR). In this work, we solve this problem by developing a novel adversarial meta sampling (AMS) approach to improve MML-ASR. When sampling tasks in MML-ASR, AMS adaptively determines the task sampling probability for each source language. Specifically, for each source language, if the query loss is large, it means that its tasks are not well sampled to train ASR model in terms of its quantity and difficulty and thus should be sampled more frequently for extra learning. Inspired by this fact, we feed the historical task query loss of all source language domain into a network to learn a task sampling policy for adversarially increasing the current query loss of MML-ASR. Thus, the learnt task sampling policy can master the learning situation of each language and thus predicts good task sampling probability for each language for more effective learning. Finally, experiment results on two multilingual datasets show significant performance improvement when applying our AMS on MML-ASR, and also demonstrate the applicability of AMS to other low-resource speech tasks and transfer learning ASR approaches. Our codes are available at: https://github.com/iamxiaoyubei/AMS.