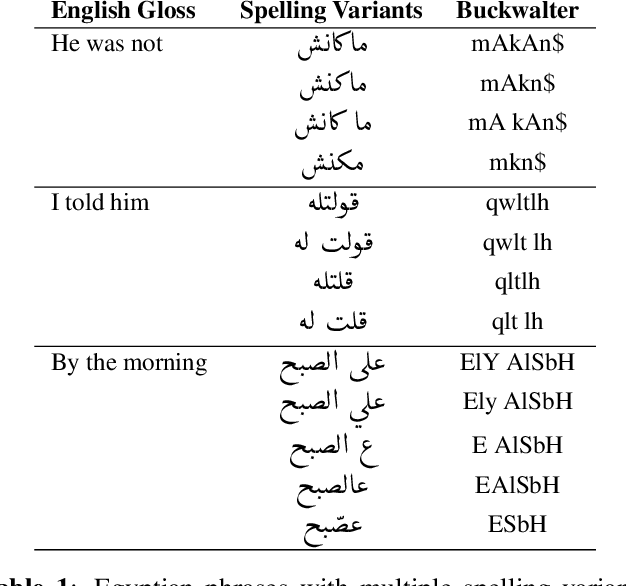 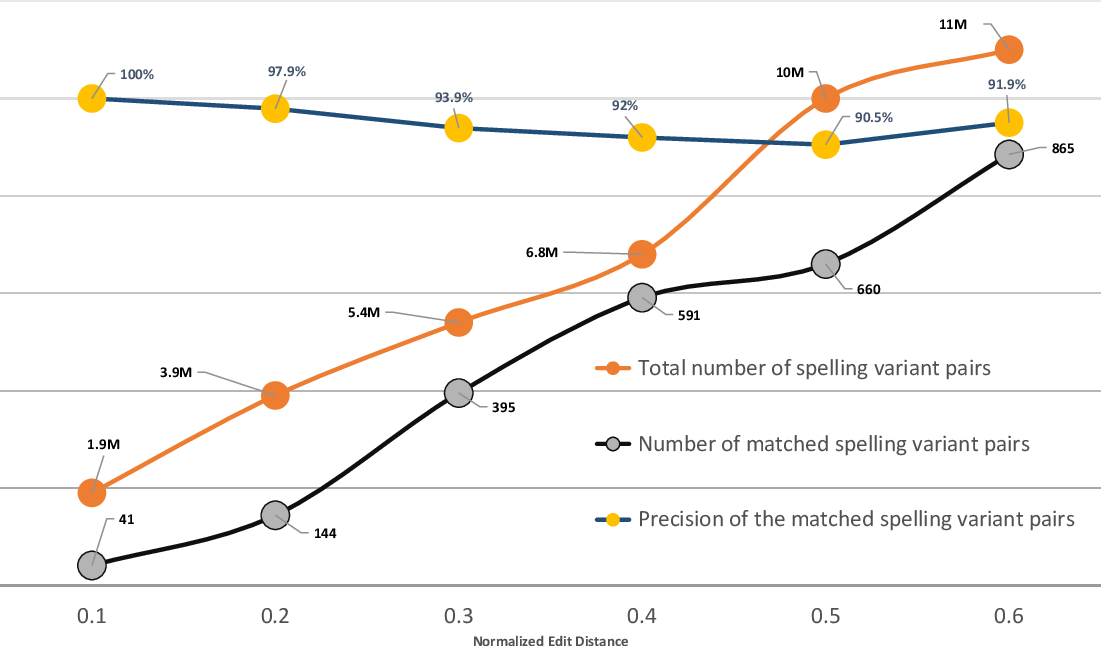 We study the problem of evaluating automatic speech recognition (ASR) systems that target dialectal speech input. A major challenge in this case is that the orthography of dialects is typically not standardized. From an ASR evaluation perspective, this means that there is no clear gold standard for the expected output, and several possible outputs could be considered correct according to different human annotators, which makes standard word error rate (WER) inadequate as an evaluation metric. Such a situation is typical for machine translation (MT), and thus we borrow ideas from an MT evaluation metric, namely TERp, an extension of translation error rate which is closely-related to WER. In particular, in the process of comparing a hypothesis to a reference, we make use of spelling variants for words and phrases, which we mine from Twitter in an unsupervised fashion. Our experiments with evaluating ASR output for Egyptian Arabic, and further manual analysis, show that the resulting WERd (i.e., WER for dialects) metric, a variant of TERp, is more adequate than WER for evaluating dialectal ASR. 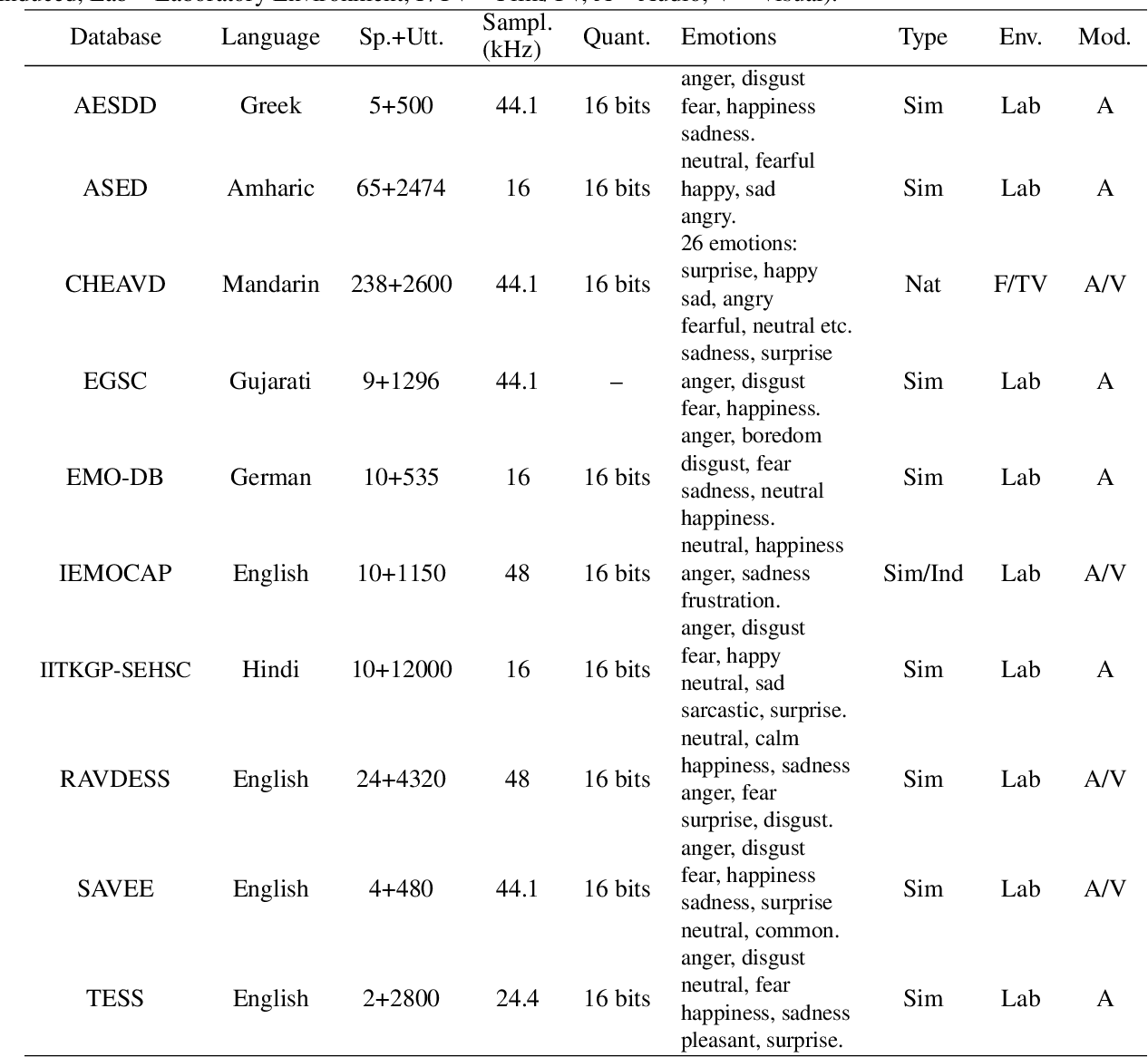 In this paper we present the Amharic Speech Emotion Dataset (ASED), which covers four dialects (Gojjam, Wollo, Shewa and Gonder) and five different emotions (neutral, fearful, happy, sad and angry). We believe it is the first Speech Emotion Recognition (SER) dataset for the Amharic language. 65 volunteer participants, all native speakers, recorded 2,474 sound samples, two to four seconds in length. Eight judges assigned emotions to the samples with high agreement level (Fleiss kappa = 0.8). The resulting dataset is freely available for download. Next, we developed a four-layer variant of the well-known VGG model which we call VGGb. Three experiments were then carried out using VGGb for SER, using ASED. First, we investigated whether Mel-spectrogram features or Mel-frequency Cepstral coefficient (MFCC) features work best for Amharic. This was done by training two VGGb SER models on ASED, one using Mel-spectrograms and the other using MFCC. Four forms of training were tried, standard cross-validation, and three variants based on sentences, dialects and speaker groups. Thus, a sentence used for training would not be used for testing, and the same for a dialect and speaker group. The conclusion was that MFCC features are superior under all four training schemes. MFCC was therefore adopted for Experiment 2, where VGGb and three other existing models were compared on ASED: RESNet50, Alex-Net and LSTM. VGGb was found to have very good accuracy (90.73%) as well as the fastest training time. In Experiment 3, the performance of VGGb was compared when trained on two existing SER datasets, RAVDESS (English) and EMO-DB (German) as well as on ASED (Amharic). Results are comparable across these languages, with ASED being the highest. This suggests that VGGb can be successfully applied to other languages. We hope that ASED will encourage researchers to experiment with other models for Amharic SER. 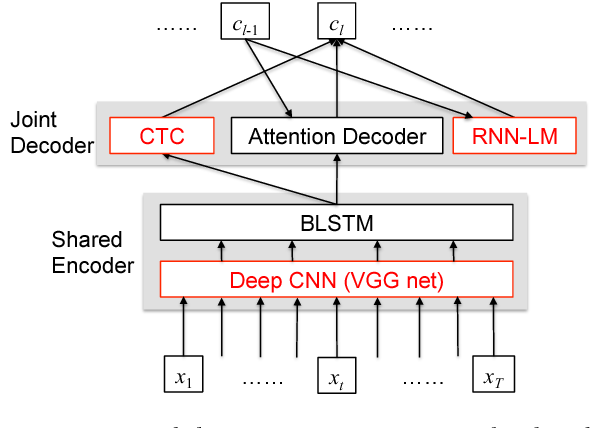 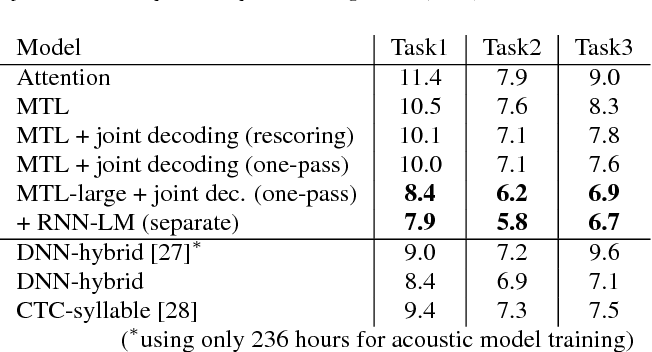 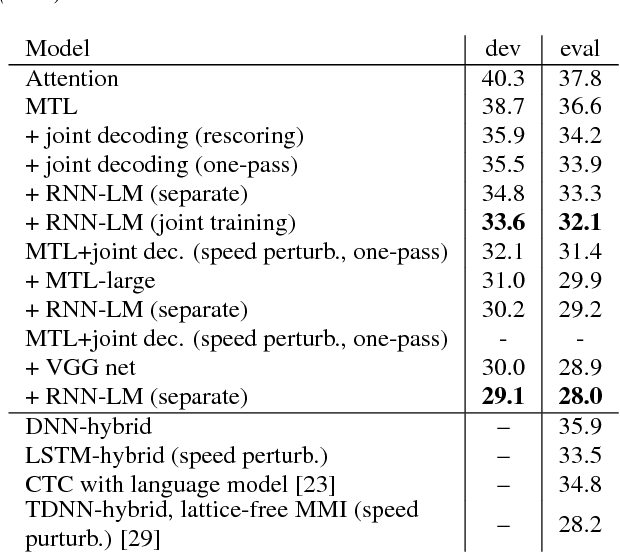 We present a state-of-the-art end-to-end Automatic Speech Recognition (ASR) model. We learn to listen and write characters with a joint Connectionist Temporal Classification (CTC) and attention-based encoder-decoder network. The encoder is a deep Convolutional Neural Network (CNN) based on the VGG network. The CTC network sits on top of the encoder and is jointly trained with the attention-based decoder. During the beam search process, we combine the CTC predictions, the attention-based decoder predictions and a separately trained LSTM language model. We achieve a 5-10\% error reduction compared to prior systems on spontaneous Japanese and Chinese speech, and our end-to-end model beats out traditional hybrid ASR systems. 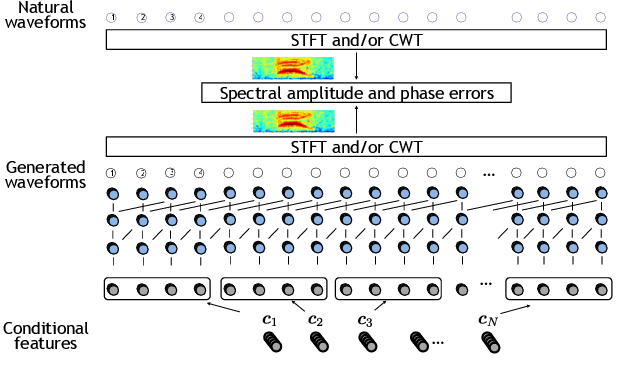 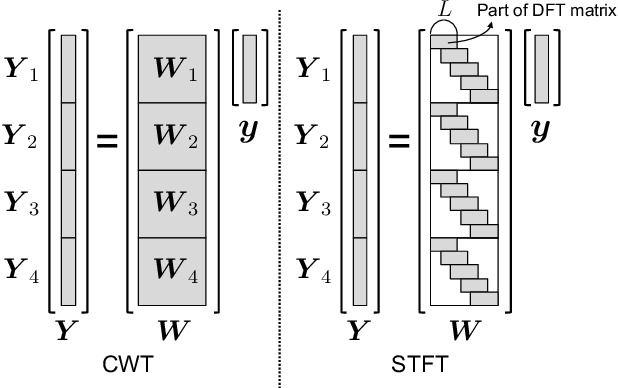 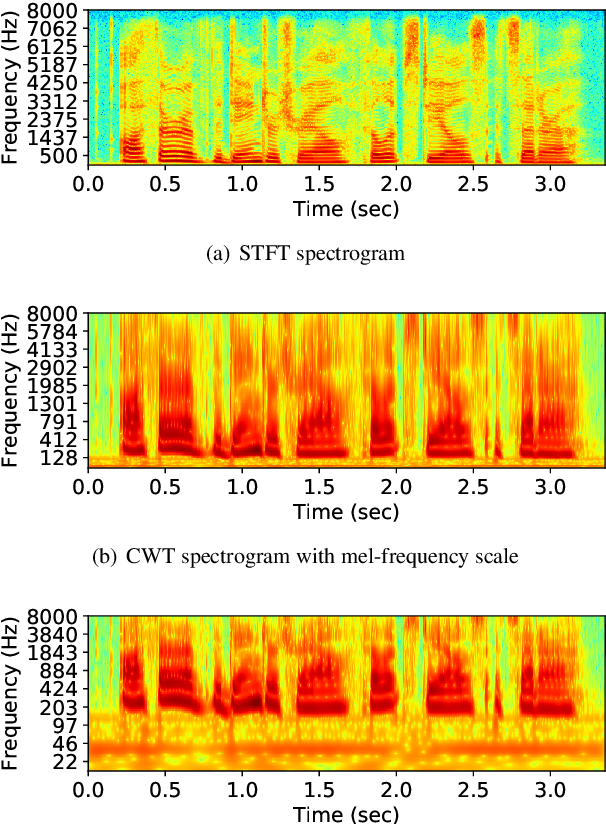 Recently, we proposed short-time Fourier transform (STFT)-based loss functions for training a neural speech waveform model. In this paper, we generalize the above framework and propose a training scheme for such models based on spectral amplitude and phase losses obtained by either STFT or continuous wavelet transform (CWT), or both of them. Since CWT is capable of having time and frequency resolutions different from those of STFT and is cable of considering those closer to human auditory scales, the proposed loss functions could provide complementary information on speech signals. Experimental results showed that it is possible to train a high-quality model by using the proposed CWT spectral loss and is as good as one using STFT-based loss. 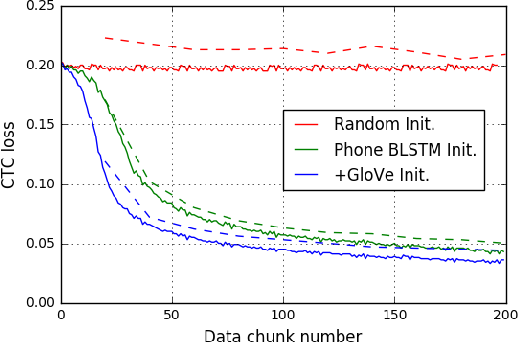 Recent work on end-to-end automatic speech recognition (ASR) has shown that the connectionist temporal classification (CTC) loss can be used to convert acoustics to phone or character sequences. Such systems are used with a dictionary and separately-trained Language Model (LM) to produce word sequences. However, they are not truly end-to-end in the sense of mapping acoustics directly to words without an intermediate phone representation. In this paper, we present the first results employing direct acoustics-to-word CTC models on two well-known public benchmark tasks: Switchboard and CallHome. These models do not require an LM or even a decoder at run-time and hence recognize speech with minimal complexity. However, due to the large number of word output units, CTC word models require orders of magnitude more data to train reliably compared to traditional systems. We present some techniques to mitigate this issue. Our CTC word model achieves a word error rate of 13.0%/18.8% on the Hub5-2000 Switchboard/CallHome test sets without any LM or decoder compared with 9.6%/16.0% for phone-based CTC with a 4-gram LM. We also present rescoring results on CTC word model lattices to quantify the performance benefits of a LM, and contrast the performance of word and phone CTC models.

While wav2vec 2.0 has been proposed for speech recognition (ASR), it can also be used for speech emotion recognition (SER); its performance can be significantly improved using different fine-tuning strategies. Two baseline methods, vanilla fine-tuning (V-FT) and task adaptive pretraining (TAPT) are first presented. We show that V-FT is able to outperform state-of-the-art models on the IEMOCAP dataset. TAPT, an existing NLP fine-tuning strategy, further improves the performance on SER. We also introduce a novel fine-tuning method termed P-TAPT, which modifies the TAPT objective to learn contextualized emotion representations. Experiments show that P-TAPT performs better than TAPT especially under low-resource settings. Compared to prior works in this literature, our top-line system achieved a 7.4% absolute improvement on unweighted accuracy (UA) over the state-of-the-art performance on IEMOCAP. Our code is publicly available. 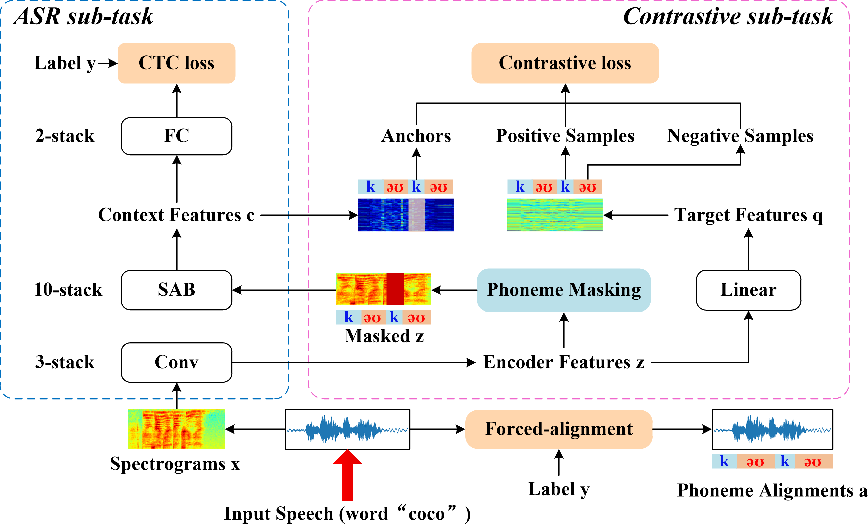 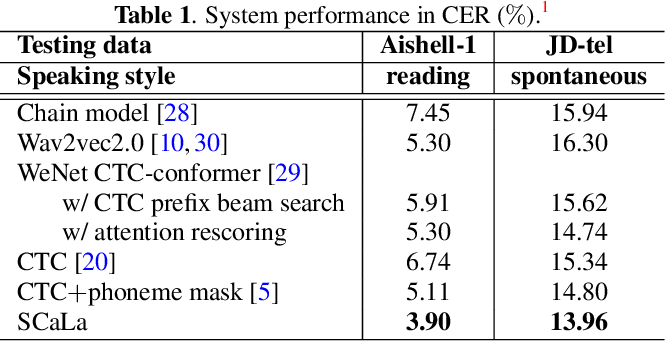 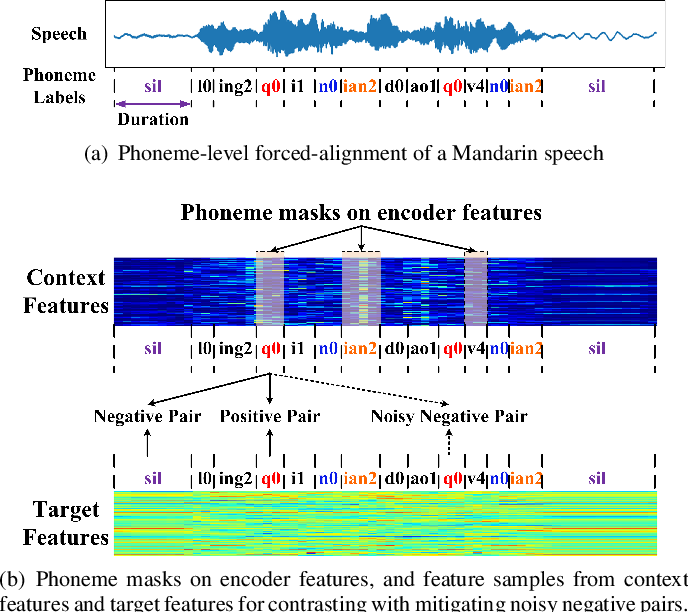 End-to-end Automatic Speech Recognition (ASR) models are usually trained to reduce the losses of the whole token sequences, while neglecting explicit phonemic-granularity supervision. This could lead to recognition errors due to similar-phoneme confusion or phoneme reduction. To alleviate this problem, this paper proposes a novel framework of Supervised Contrastive Learning (SCaLa) to enhance phonemic information learning for end-to-end ASR systems. Specifically, we introduce the self-supervised Masked Contrastive Predictive Coding (MCPC) into the fully-supervised setting. To supervise phoneme learning explicitly, SCaLa first masks the variable-length encoder features corresponding to phonemes given phoneme forced-alignment extracted from a pre-trained acoustic model, and then predicts the masked phonemes via contrastive learning. The phoneme forced-alignment can mitigate the noise of positive-negative pairs in self-supervised MCPC. Experimental results conducted on reading and spontaneous speech datasets show that the proposed approach achieves 2.84% and 1.38% Character Error Rate (CER) reductions compared to the baseline, respectively. 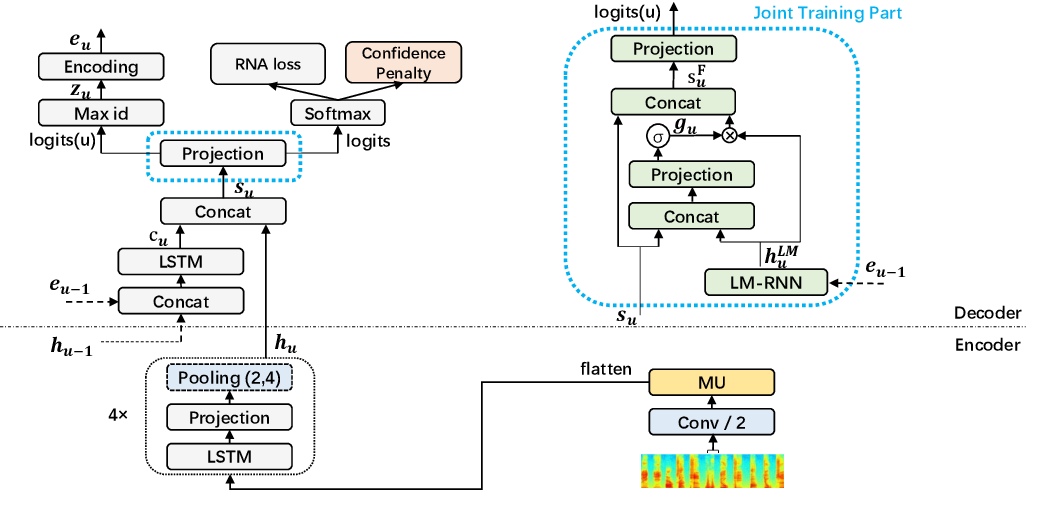 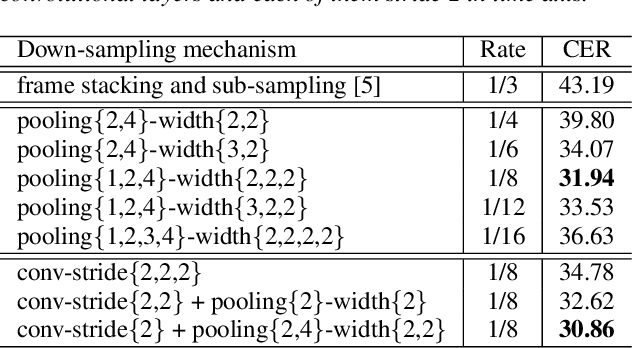 End-to-end models have been showing superiority in Automatic Speech Recognition (ASR). At the same time, the capacity of streaming recognition has become a growing requirement for end-to-end models. Following these trends, an encoder-decoder recurrent neural network called Recurrent Neural Aligner (RNA) has been freshly proposed and shown its competitiveness on two English ASR tasks. However, it is not clear if RNA can be further improved and applied to other spoken language. In this work, we explore the applicability of RNA in Mandarin Chinese and present four effective extensions: In the encoder, we redesign the temporal down-sampling and introduce a powerful convolutional structure. In the decoder, we utilize a regularizer to smooth the output distribution and conduct joint training with a language model. On two Mandarin Chinese conversational telephone speech recognition (MTS) datasets, our Extended-RNA obtains promising performance. Particularly, it achieves 27.7% character error rate (CER), which is superior to current state-of-the-art result on the popular HKUST task. 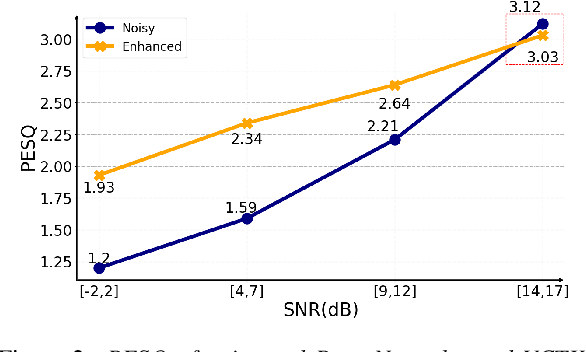 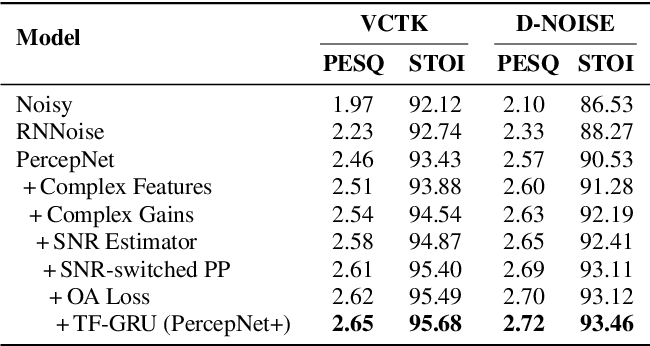 PercepNet, a recent extension of the RNNoise, an efficient, high-quality and real-time full-band speech enhancement technique, has shown promising performance in various public deep noise suppression tasks. This paper proposes a new approach, named PercepNet+, to further extend the PercepNet with four significant improvements. First, we introduce a phase-aware structure to leverage the phase information into PercepNet, by adding the complex features and complex subband gains as the deep network input and output respectively. Then, a signal-to-noise ratio (SNR) estimator and an SNR switched post-processing are specially designed to alleviate the over attenuation (OA) that appears in high SNR conditions of the original PercepNet. Moreover, the GRU layer is replaced by TF-GRU to model both temporal and frequency dependencies. Finally, we propose to integrate the loss of complex subband gain, SNR, pitch filtering strength, and an OA loss in a multi-objective learning manner to further improve the speech enhancement performance. Experimental results show that, the proposed PercepNet+ outperforms the original PercepNet significantly in terms of both PESQ and STOI, without increasing the model size too much.


* This article was submitted to Interspeech 2022