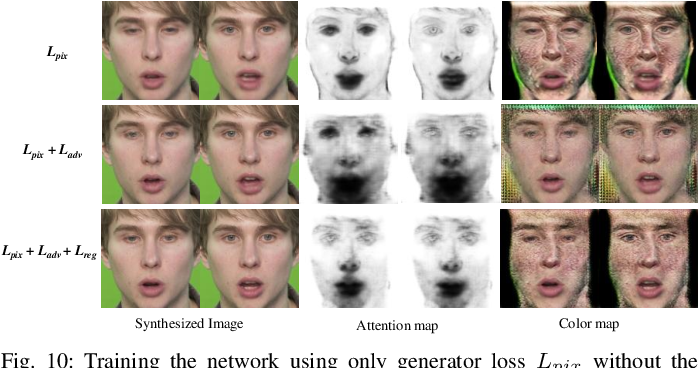 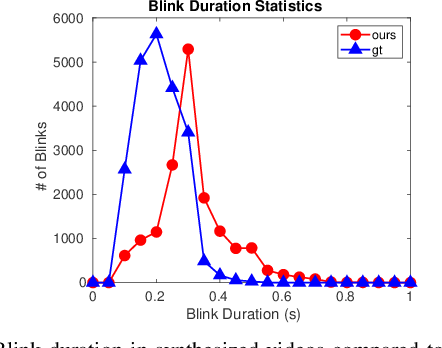 Speech-driven facial animation is useful for a variety of applications such as telepresence, chatbots, etc. The necessary attributes of having a realistic face animation are 1) audio-visual synchronization (2) identity preservation of the target individual (3) plausible mouth movements (4) presence of natural eye blinks. The existing methods mostly address the audio-visual lip synchronization, and few recent works have addressed the synthesis of natural eye blinks for overall video realism. In this paper, we propose a method for identity-preserving realistic facial animation from speech. We first generate person-independent facial landmarks from audio using DeepSpeech features for invariance to different voices, accents, etc. To add realism, we impose eye blinks on facial landmarks using unsupervised learning and retargets the person-independent landmarks to person-specific landmarks to preserve the identity-related facial structure which helps in the generation of plausible mouth shapes of the target identity. Finally, we use LSGAN to generate the facial texture from person-specific facial landmarks, using an attention mechanism that helps to preserve identity-related texture. An extensive comparison of our proposed method with the current state-of-the-art methods demonstrates a significant improvement in terms of lip synchronization accuracy, image reconstruction quality, sharpness, and identity-preservation. A user study also reveals improved realism of our animation results over the state-of-the-art methods. To the best of our knowledge, this is the first work in speech-driven 2D facial animation that simultaneously addresses all the above-mentioned attributes of a realistic speech-driven face animation.

Modelling the Lexicon in Unsupervised Part of Speech Induction 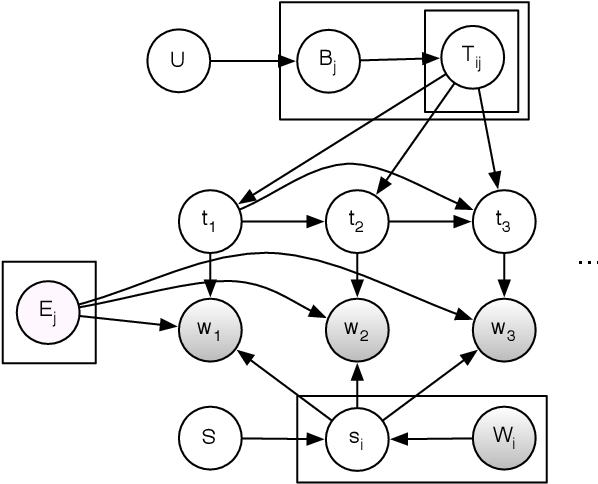 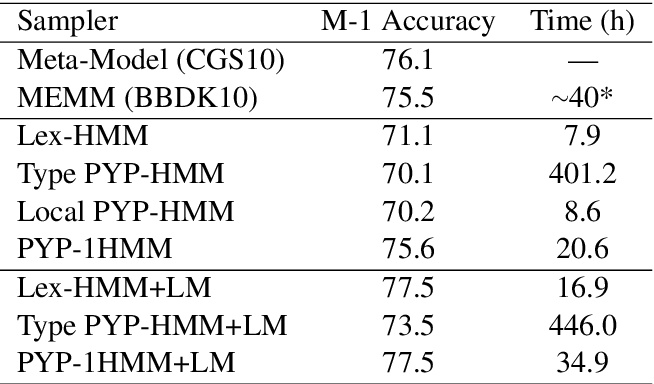 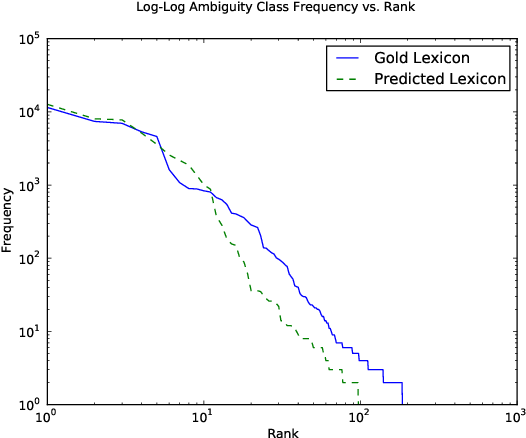 Automatically inducing the syntactic part-of-speech categories for words in text is a fundamental task in Computational Linguistics. While the performance of unsupervised tagging models has been slowly improving, current state-of-the-art systems make the obviously incorrect assumption that all tokens of a given word type must share a single part-of-speech tag. This one-tag-per-type heuristic counters the tendency of Hidden Markov Model based taggers to over generate tags for a given word type. However, it is clearly incompatible with basic syntactic theory. In this paper we extend a state-of-the-art Pitman-Yor Hidden Markov Model tagger with an explicit model of the lexicon. In doing so we are able to incorporate a soft bias towards inducing few tags per type. We develop a particle filter for drawing samples from the posterior of our model and present empirical results that show that our model is competitive with and faster than the state-of-the-art without making any unrealistic restrictions.

On-device end-to-end speech recognition poses a high requirement on model efficiency. Most prior works improve the efficiency by reducing model sizes. We propose to reduce the complexity of model architectures in addition to model sizes. More specifically, we reduce the floating-point operations in conformer by replacing the transformer module with a performer. The proposed attention-based efficient end-to-end speech recognition model yields competitive performance on the LibriSpeech corpus with 10 millions of parameters and linear computation complexity. The proposed model also outperforms previous lightweight end-to-end models by about 20% relatively in word error rate.


* The current submission has not been reviewed by the coauthor 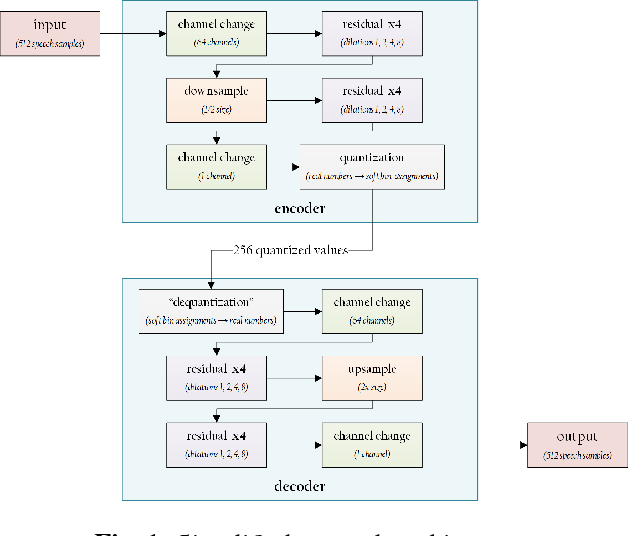 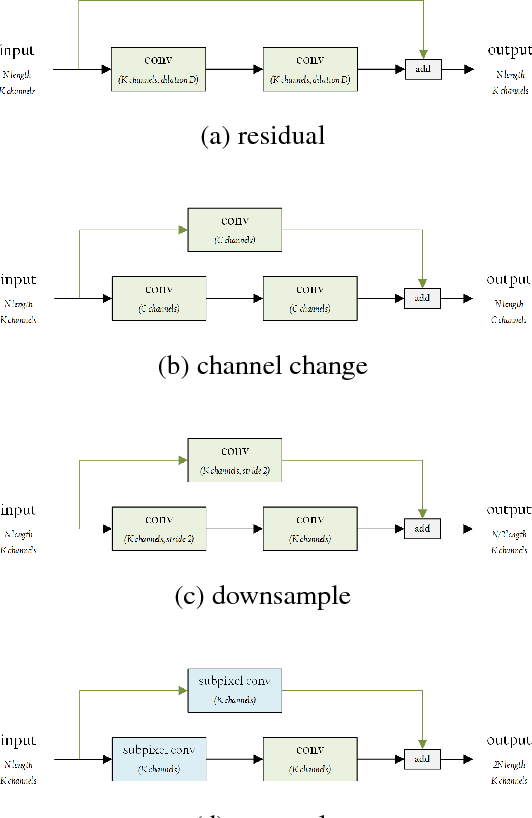 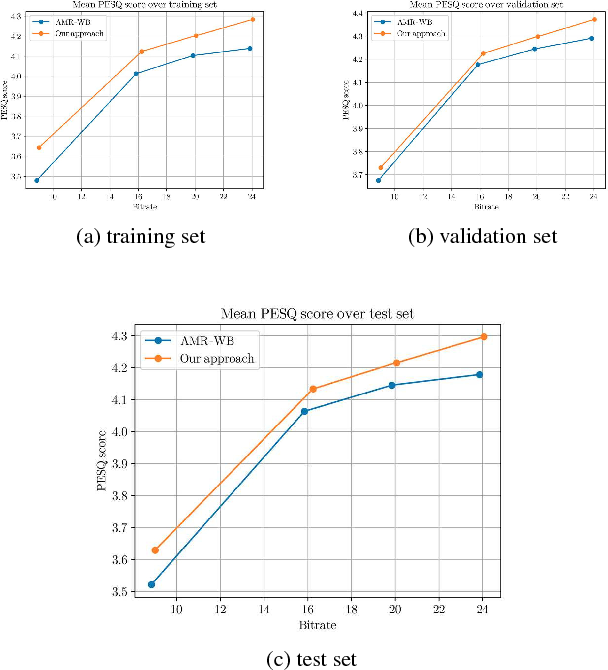 Modern compression algorithms are often the result of laborious domain-specific research; industry standards such as MP3, JPEG, and AMR-WB took years to develop and were largely hand-designed. We present a deep neural network model which optimizes all the steps of a wideband speech coding pipeline (compression, quantization, entropy coding, and decompression) end-to-end directly from raw speech data -- no manual feature engineering necessary, and it trains in hours. In testing, our DNN-based coder performs on par with the AMR-WB standard at a variety of bitrates (~9kbps up to ~24kbps). It also runs in realtime on a 3.8GhZ Intel CPU. 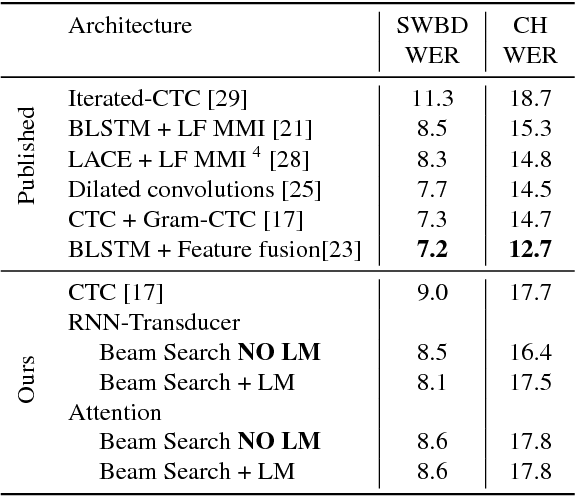 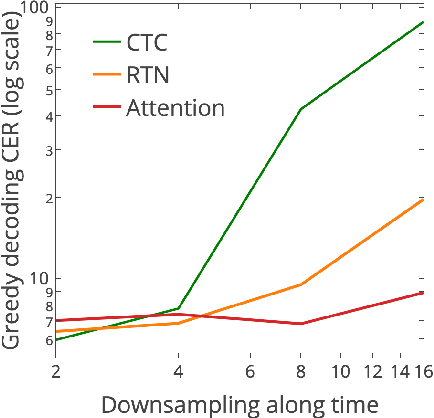 In this work, we perform an empirical comparison among the CTC, RNN-Transducer, and attention-based Seq2Seq models for end-to-end speech recognition. We show that, without any language model, Seq2Seq and RNN-Transducer models both outperform the best reported CTC models with a language model, on the popular Hub5'00 benchmark. On our internal diverse dataset, these trends continue - RNNTransducer models rescored with a language model after beam search outperform our best CTC models. These results simplify the speech recognition pipeline so that decoding can now be expressed purely as neural network operations. We also study how the choice of encoder architecture affects the performance of the three models - when all encoder layers are forward only, and when encoders downsample the input representation aggressively. 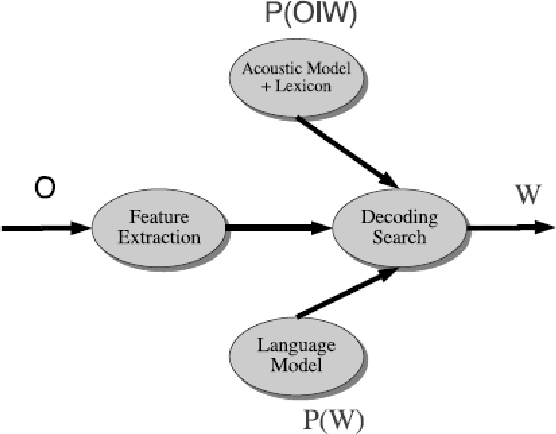 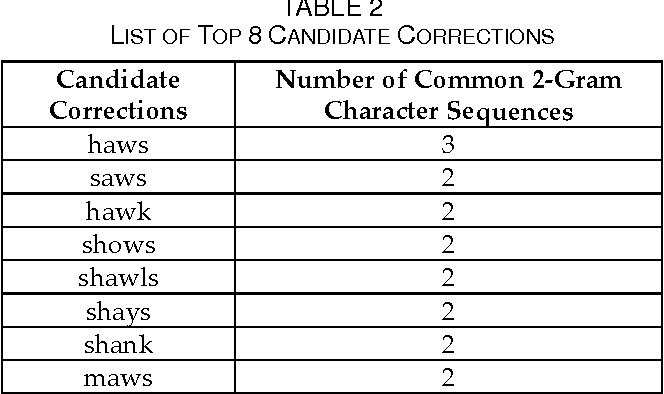 At the present time, computers are employed to solve complex tasks and problems ranging from simple calculations to intensive digital image processing and intricate algorithmic optimization problems to computationally-demanding weather forecasting problems. ASR short for Automatic Speech Recognition is yet another type of computational problem whose purpose is to recognize human spoken speech and convert it into text that can be processed by a computer. Despite that ASR has many versatile and pervasive real-world applications,it is still relatively erroneous and not perfectly solved as it is prone to produce spelling errors in the recognized text, especially if the ASR system is operating in a noisy environment, its vocabulary size is limited, and its input speech is of bad or low quality. This paper proposes a post-editing ASR error correction method based on MicrosoftN-Gram dataset for detecting and correcting spelling errors generated by ASR systems. The proposed method comprises an error detection algorithm for detecting word errors; a candidate corrections generation algorithm for generating correction suggestions for the detected word errors; and a context-sensitive error correction algorithm for selecting the best candidate for correction. The virtue of using the Microsoft N-Gram dataset is that it contains real-world data and word sequences extracted from the web which canmimica comprehensive dictionary of words having a large and all-inclusive vocabulary. Experiments conducted on numerous speeches, performed by different speakers, showed a remarkable reduction in ASR errors. Future research can improve upon the proposed algorithm so much so that it can be parallelized to take advantage of multiprocessor and distributed systems. 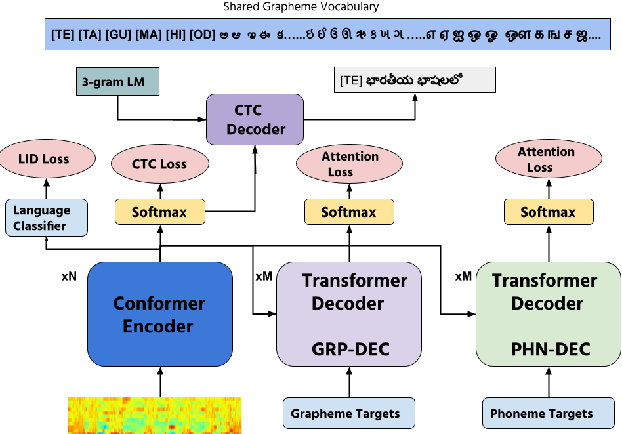 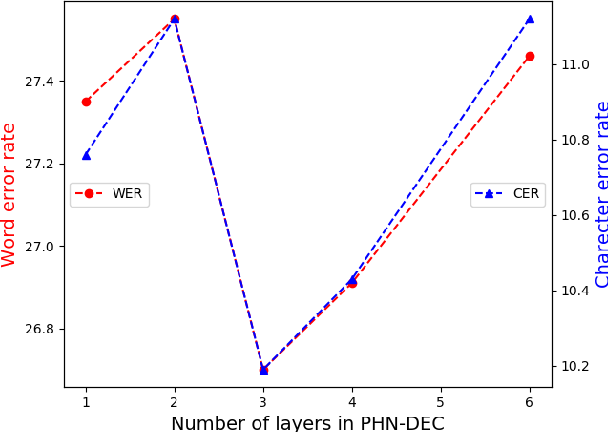 Transformer-based models have recently become very popular for sequence-to-sequence applications such as machine translation and speech recognition. This work proposes a dual-decoder transformer model for low-resource multilingual speech recognition for Indian languages. Our proposed model consists of a Conformer [1] encoder, two parallel transformer decoders, and a language classifier. We use a phoneme decoder (PHN-DEC) for the phoneme recognition task and a grapheme decoder (GRP-DEC) to predict grapheme sequence along with language information. We consider phoneme recognition and language identification as auxiliary tasks in the multi-task learning framework. We jointly optimize the network for phoneme recognition, grapheme recognition, and language identification tasks with Joint CTC-Attention [2] training. Our experiments show that we can obtain a significant reduction in WER over the baseline approaches. We also show that our dual-decoder approach obtains significant improvement over the single decoder approach. 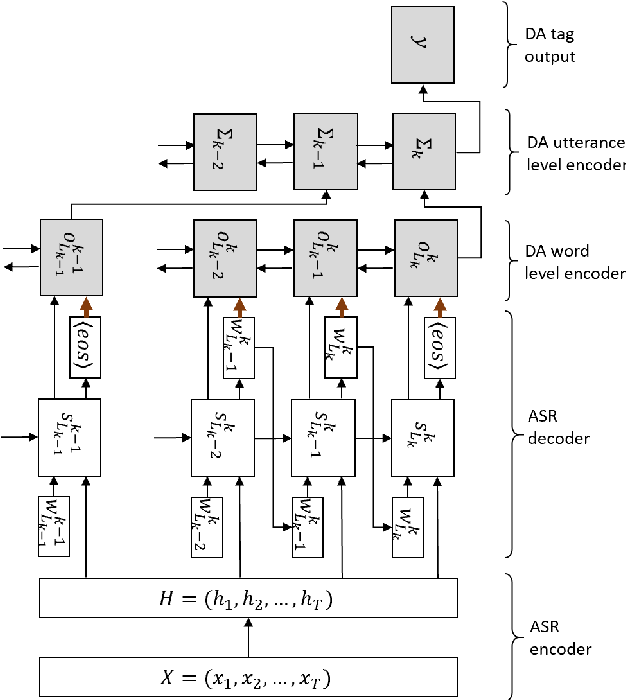 Spoken language understanding, which extracts intents and/or semantic concepts in utterances, is conventionally formulated as a post-processing of automatic speech recognition. It is usually trained with oracle transcripts, but needs to deal with errors by ASR. Moreover, there are acoustic features which are related with intents but not represented with the transcripts. In this paper, we present an end-to-end model which directly converts speech into dialog acts without the deterministic transcription process. In the proposed model, the dialog act recognition network is conjunct with an acoustic-to-word ASR model at its latent layer before the softmax layer, which provides a distributed representation of word-level ASR decoding information. Then, the entire network is fine-tuned in an end-to-end manner. This allows for stable training as well as robustness against ASR errors. The model is further extended to conduct DA segmentation jointly. Evaluations with the Switchboard corpus demonstrate that the proposed method significantly improves dialog act recognition accuracy from the conventional pipeline framework.

Integrating end-to-end neural and clustering-based diarization: Getting the best of both worlds 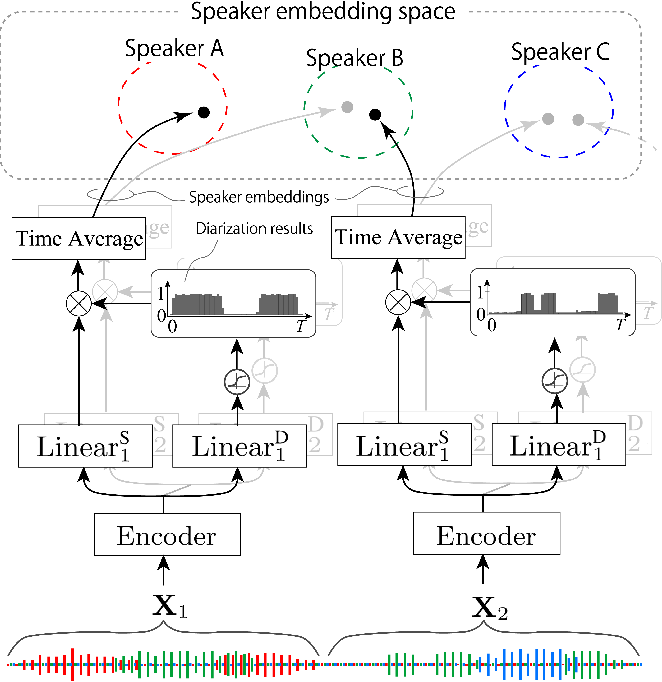 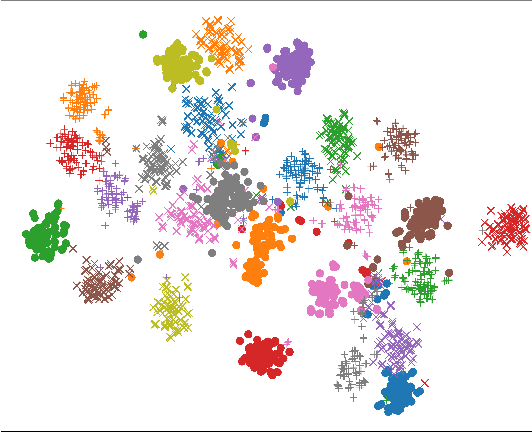 Recent diarization technologies can be categorized into two approaches, i.e., clustering and end-to-end neural approaches, which have different pros and cons. The clustering-based approaches assign speaker labels to speech regions by clustering speaker embeddings such as x-vectors. While it can be seen as a current state-of-the-art approach that works for various challenging data with reasonable robustness and accuracy, it has a critical disadvantage that it cannot handle overlapped speech that is inevitable in natural conversational data. In contrast, the end-to-end neural diarization (EEND), which directly predicts diarization labels using a neural network, was devised to handle the overlapped speech. While the EEND, which can easily incorporate emerging deep-learning technologies, has started outperforming the x-vector clustering approach in some realistic database, it is difficult to make it work for `long' recordings (e.g., recordings longer than 10 minutes) because of, e.g., its huge memory consumption. Block-wise independent processing is also difficult because it poses an inter-block label permutation problem, i.e., an ambiguity of the speaker label assignments between blocks. In this paper, we propose a simple but effective hybrid diarization framework that works with overlapped speech and for long recordings containing an arbitrary number of speakers. It modifies the conventional EEND framework to simultaneously output global speaker embeddings so that speaker clustering can be performed across blocks to solve the permutation problem. With experiments based on simulated noisy reverberant 2-speaker meeting-like data, we show that the proposed framework works significantly better than the original EEND especially when the input data is long. 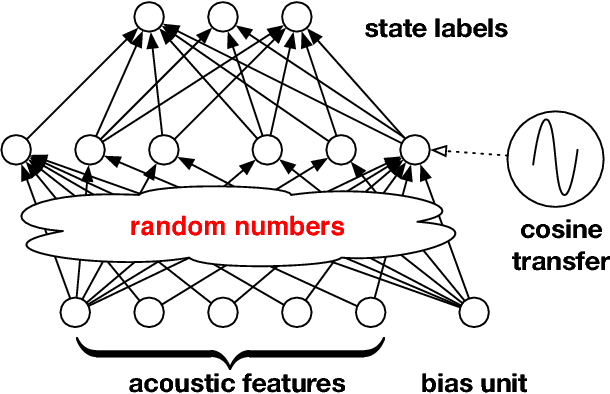 We study large-scale kernel methods for acoustic modeling in speech recognition and compare their performance to deep neural networks (DNNs). We perform experiments on four speech recognition datasets, including the TIMIT and Broadcast News benchmark tasks, and compare these two types of models on frame-level performance metrics (accuracy, cross-entropy), as well as on recognition metrics (word/character error rate). In order to scale kernel methods to these large datasets, we use the random Fourier feature method of Rahimi and Recht (2007). We propose two novel techniques for improving the performance of kernel acoustic models. First, in order to reduce the number of random features required by kernel models, we propose a simple but effective method for feature selection. The method is able to explore a large number of non-linear features while maintaining a compact model more efficiently than existing approaches. Second, we present a number of frame-level metrics which correlate very strongly with recognition performance when computed on the heldout set; we take advantage of these correlations by monitoring these metrics during training in order to decide when to stop learning. This technique can noticeably improve the recognition performance of both DNN and kernel models, while narrowing the gap between them. Additionally, we show that the linear bottleneck method of Sainath et al. (2013) improves the performance of our kernel models significantly, in addition to speeding up training and making the models more compact. Together, these three methods dramatically improve the performance of kernel acoustic models, making their performance comparable to DNNs on the tasks we explored.