Non-parallel data voice conversion (VC) have achieved considerable breakthroughs recently through introducing bottleneck features (BNFs) extracted by the automatic speech recognition(ASR) model. However, selection of BNFs have a significant impact on VC result. For example, when extracting BNFs from ASR trained with Cross Entropy loss (CE-BNFs) and feeding into neural network to train a VC system, the timbre similarity of converted speech is significantly degraded. If BNFs are extracted from ASR trained using Connectionist Temporal Classification loss (CTC-BNFs), the naturalness of the converted speech may decrease. This phenomenon is caused by the difference of information contained in BNFs. In this paper, we proposed an any-to-one VC method using hybrid bottleneck features extracted from CTC-BNFs and CE-BNFs to complement each other advantages. Gradient reversal layer and instance normalization were used to extract prosody information from CE-BNFs and content information from CTC-BNFs. Auto-regressive decoder and Hifi-GAN vocoder were used to generate high-quality waveform. Experimental results show that our proposed method achieves higher similarity, naturalness, quality than baseline method and reveals the differences between the information contained in CE-BNFs and CTC-BNFs as well as the influence they have on the converted speech. 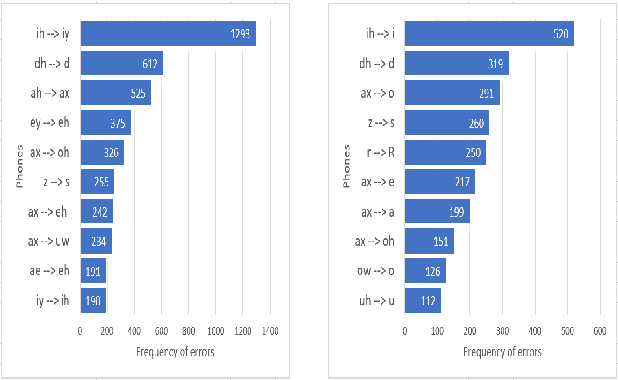 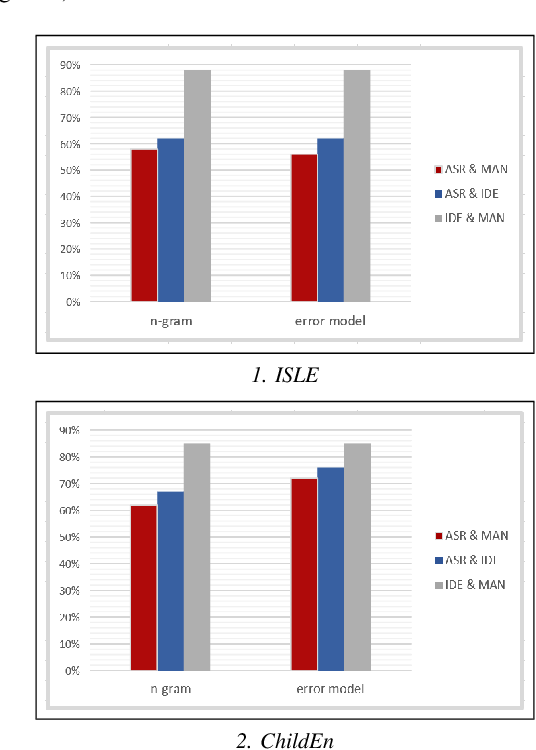 Pronunciation is one of the fundamentals of language learning, and it is considered a primary factor of spoken language when it comes to an understanding and being understood by others. The persistent presence of high error rates in speech recognition domains resulting from mispronunciations motivates us to find alternative techniques for handling mispronunciations. In this study, we develop a mispronunciation assessment system that checks the pronunciation of non-native English speakers, identifies the commonly mispronounced phonemes of Italian learners of English, and presents an evaluation of the non-native pronunciation observed in phonetically annotated speech corpora. In this work, to detect mispronunciations, we used a phone-based ASR implemented using Kaldi. We used two non-native English labeled corpora; (i) a corpus of Italian adults contains 5,867 utterances from 46 speakers, and (ii) a corpus of Italian children consists of 5,268 utterances from 78 children. Our results show that the selected error model can discriminate correct sounds from incorrect sounds in both native and nonnative speech, and therefore can be used to detect pronunciation errors in non-native speech. The phone error rates show improvement in using the error language model. The ASR system shows better accuracy after applying the error model on our selected corpora. 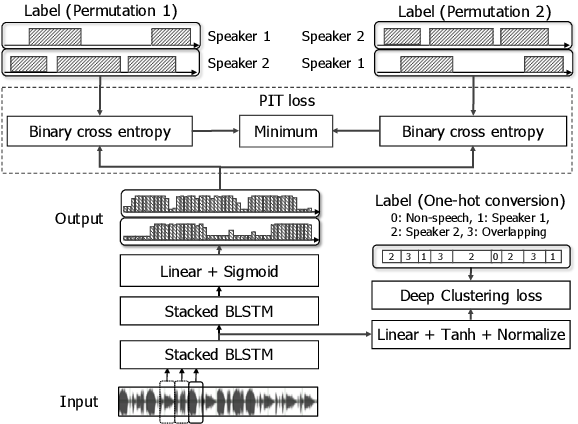 In this paper, we propose a novel end-to-end neural-network-based speaker diarization method. Unlike most existing methods, our proposed method does not have separate modules for extraction and clustering of speaker representations. Instead, our model has a single neural network that directly outputs speaker diarization results. To realize such a model, we formulate the speaker diarization problem as a multi-label classification problem, and introduces a permutation-free objective function to directly minimize diarization errors without being suffered from the speaker-label permutation problem. Besides its end-to-end simplicity, the proposed method also benefits from being able to explicitly handle overlapping speech during training and inference. Because of the benefit, our model can be easily trained/adapted with real-recorded multi-speaker conversations just by feeding the corresponding multi-speaker segment labels. We evaluated the proposed method on simulated speech mixtures. The proposed method achieved diarization error rate of 12.28%, while a conventional clustering-based system produced diarization error rate of 28.77%. Furthermore, the domain adaptation with real-recorded speech provided 25.6% relative improvement on the CALLHOME dataset. Our source code is available online at https://github.com/hitachi-speech/EEND. 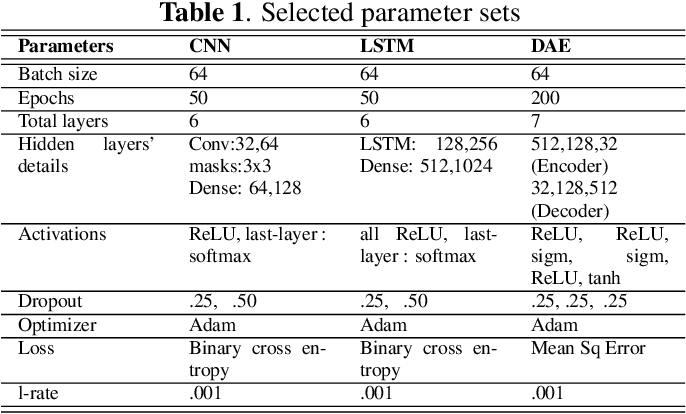 Speech-related Brain Computer Interfaces (BCI) aim primarily at finding an alternative vocal communication pathway for people with speaking disabilities. As a step towards full decoding of imagined speech from active thoughts, we present a BCI system for subject-independent classification of phonological categories exploiting a novel deep learning based hierarchical feature extraction scheme. To better capture the complex representation of high-dimensional electroencephalography (EEG) data, we compute the joint variability of EEG electrodes into a channel cross-covariance matrix. We then extract the spatio-temporal information encoded within the matrix using a mixed deep neural network strategy. Our model framework is composed of a convolutional neural network (CNN), a long-short term network (LSTM), and a deep autoencoder. We train the individual networks hierarchically, feeding their combined outputs in a final gradient boosting classification step. Our best models achieve an average accuracy of 77.9% across five different binary classification tasks, providing a significant 22.5% improvement over previous methods. As we also show visually, our work demonstrates that the speech imagery EEG possesses significant discriminative information about the intended articulatory movements responsible for natural speech synthesis.


* Accepted for publication in IEEE ICASSP 2019

Lip Movements Generation at a Glance 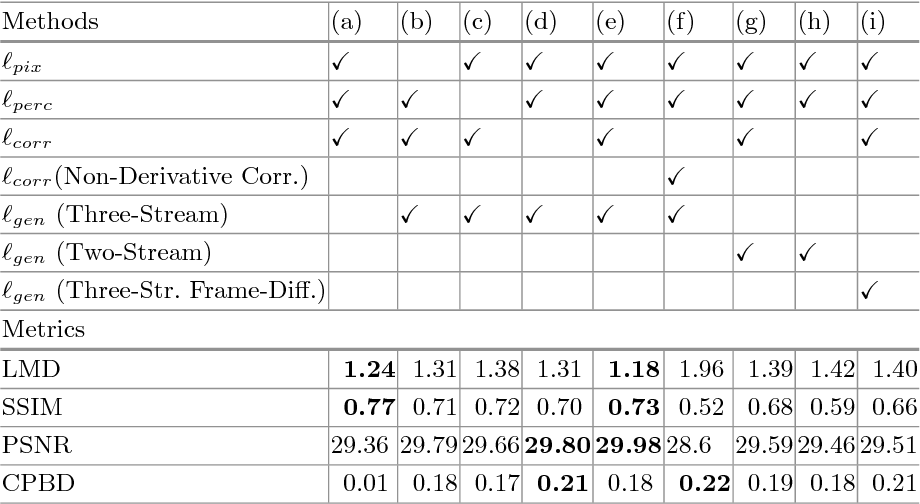 Cross-modality generation is an emerging topic that aims to synthesize data in one modality based on information in a different modality. In this paper, we consider a task of such: given an arbitrary audio speech and one lip image of arbitrary target identity, generate synthesized lip movements of the target identity saying the speech. To perform well in this task, it inevitably requires a model to not only consider the retention of target identity, photo-realistic of synthesized images, consistency and smoothness of lip images in a sequence, but more importantly, learn the correlations between audio speech and lip movements. To solve the collective problems, we explore the best modeling of the audio-visual correlations in building and training a lip-movement generator network. Specifically, we devise a method to fuse audio and image embeddings to generate multiple lip images at once and propose a novel correlation loss to synchronize lip changes and speech changes. Our final model utilizes a combination of four losses for a comprehensive consideration in generating lip movements; it is trained in an end-to-end fashion and is robust to lip shapes, view angles and different facial characteristics. Thoughtful experiments on three datasets ranging from lab-recorded to lips in-the-wild show that our model significantly outperforms other state-of-the-art methods extended to this task. 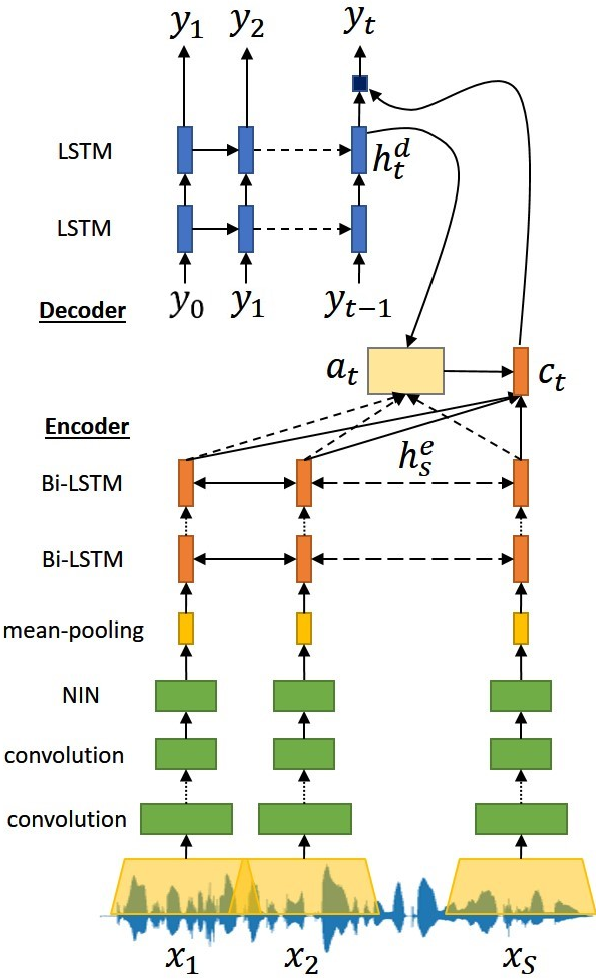 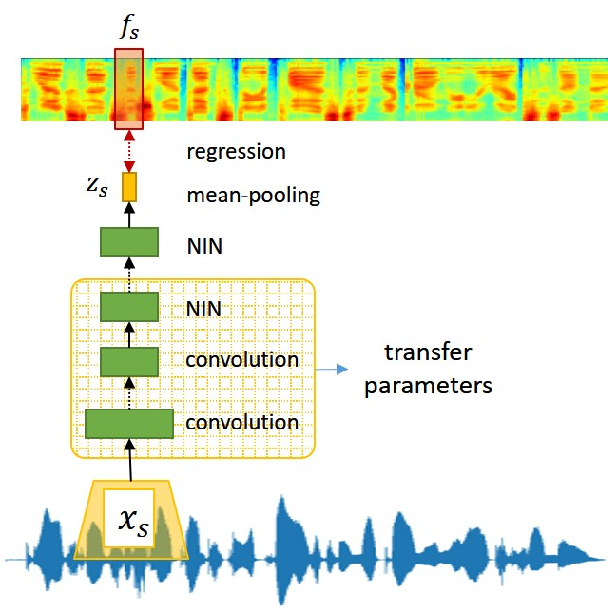 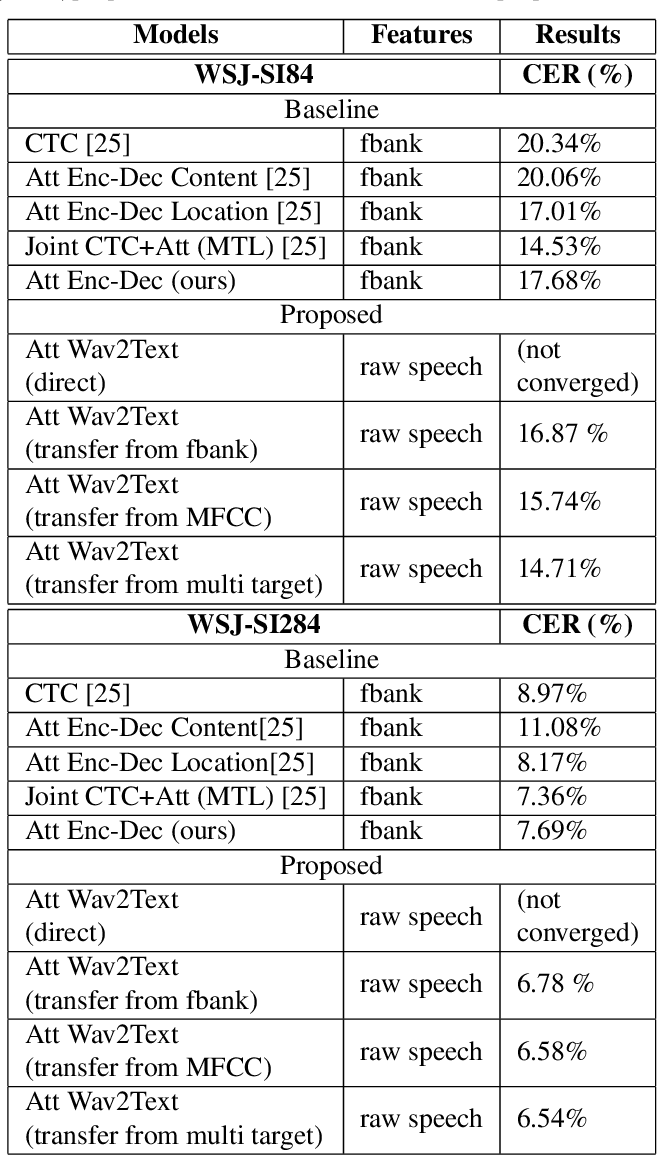 Conventional automatic speech recognition (ASR) typically performs multi-level pattern recognition tasks that map the acoustic speech waveform into a hierarchy of speech units. But, it is widely known that information loss in the earlier stage can propagate through the later stages. After the resurgence of deep learning, interest has emerged in the possibility of developing a purely end-to-end ASR system from the raw waveform to the transcription without any predefined alignments and hand-engineered models. However, the successful attempts in end-to-end architecture still used spectral-based features, while the successful attempts in using raw waveform were still based on the hybrid deep neural network - Hidden Markov model (DNN-HMM) framework. In this paper, we construct the first end-to-end attention-based encoder-decoder model to process directly from raw speech waveform to the text transcription. We called the model as "Attention-based Wav2Text". To assist the training process of the end-to-end model, we propose to utilize a feature transfer learning. Experimental results also reveal that the proposed Attention-based Wav2Text model directly with raw waveform could achieve a better result in comparison with the attentional encoder-decoder model trained on standard front-end filterbank features. 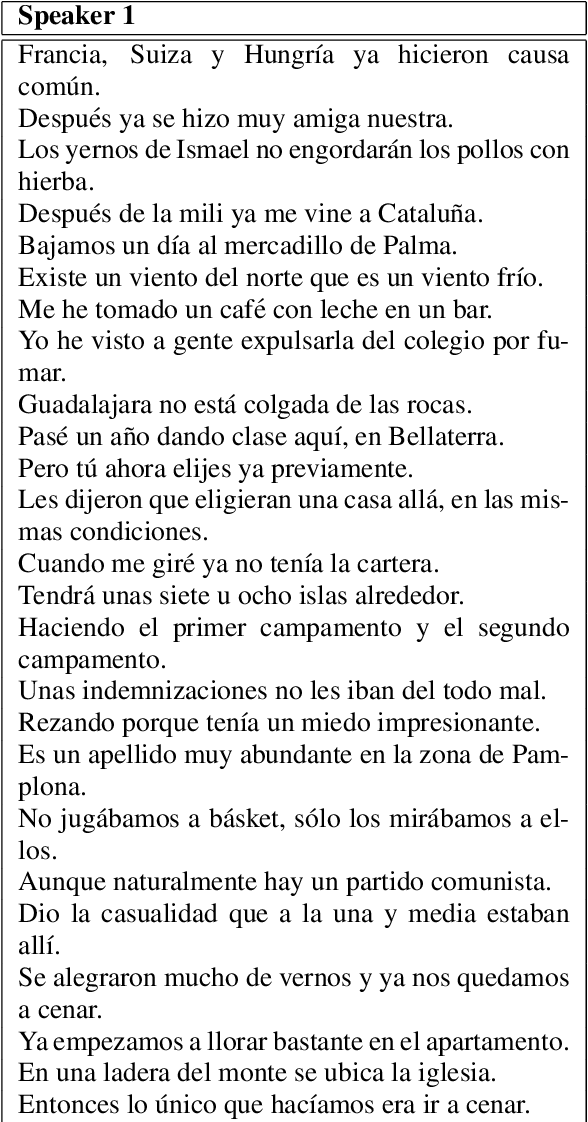 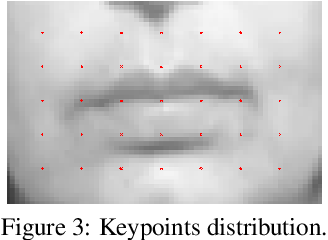 Speech is the most common communication method between humans and involves the perception of both auditory and visual channels. Automatic speech recognition focuses on interpreting the audio signals, but it has been demonstrated that video can provide information that is complementary to the audio. Thus, the study of automatic lip-reading is important and is still an open problem. One of the key challenges is the definition of the visual elementary units (the visemes) and their vocabulary. Many researchers have analyzed the importance of the phoneme to viseme mapping and have proposed viseme vocabularies with lengths between 11 and 15 visemes. These viseme vocabularies have usually been manually defined by their linguistic properties and in some cases using decision trees or clustering techniques. In this work, we focus on the automatic construction of an optimal viseme vocabulary based on the association of phonemes with similar appearance. To this end, we construct an automatic system that uses local appearance descriptors to extract the main characteristics of the mouth region and HMMs to model the statistic relations of both viseme and phoneme sequences. To compare the performance of the system different descriptors (PCA, DCT and SIFT) are analyzed. We test our system in a Spanish corpus of continuous speech. Our results indicate that we are able to recognize approximately 58% of the visemes, 47% of the phonemes and 23% of the words in a continuous speech scenario and that the optimal viseme vocabulary for Spanish is composed by 20 visemes. 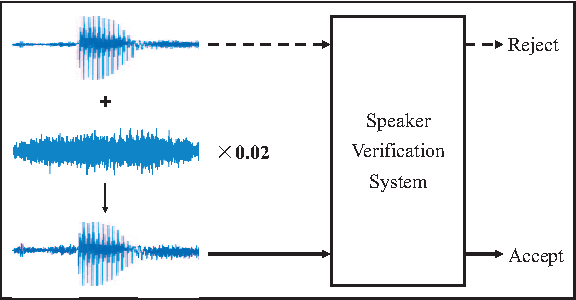 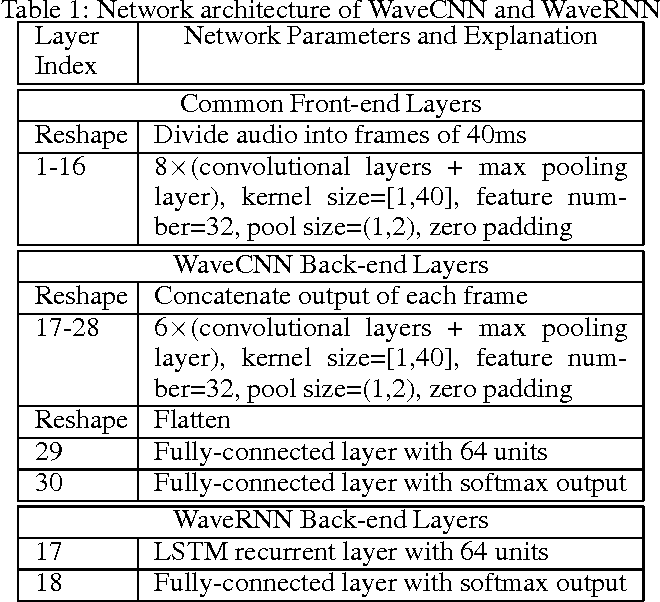 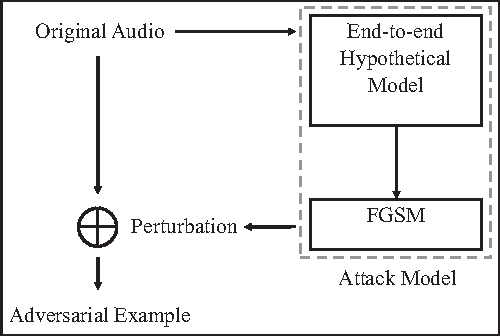 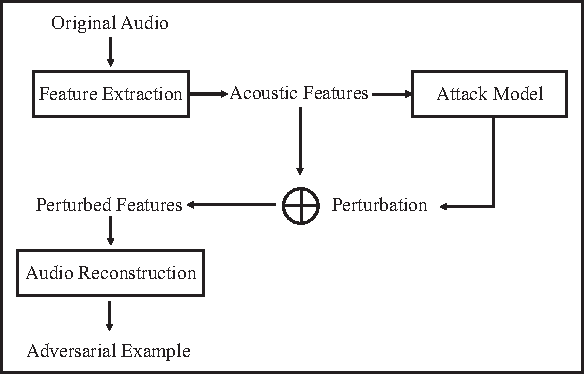 Computational paralinguistic analysis is increasingly being used in a wide range of applications, including security-sensitive applications such as speaker verification, deceptive speech detection, and medical diagnosis. While state-of-the-art machine learning techniques, such as deep neural networks, can provide robust and accurate speech analysis, they are susceptible to adversarial attacks. In this work, we propose a novel end-to-end scheme to generate adversarial examples by perturbing directly the raw waveform of an audio recording rather than specific acoustic features. Our experiments show that the proposed adversarial perturbation can lead to a significant performance drop of state-of-the-art deep neural networks, while only minimally impairing the audio quality. 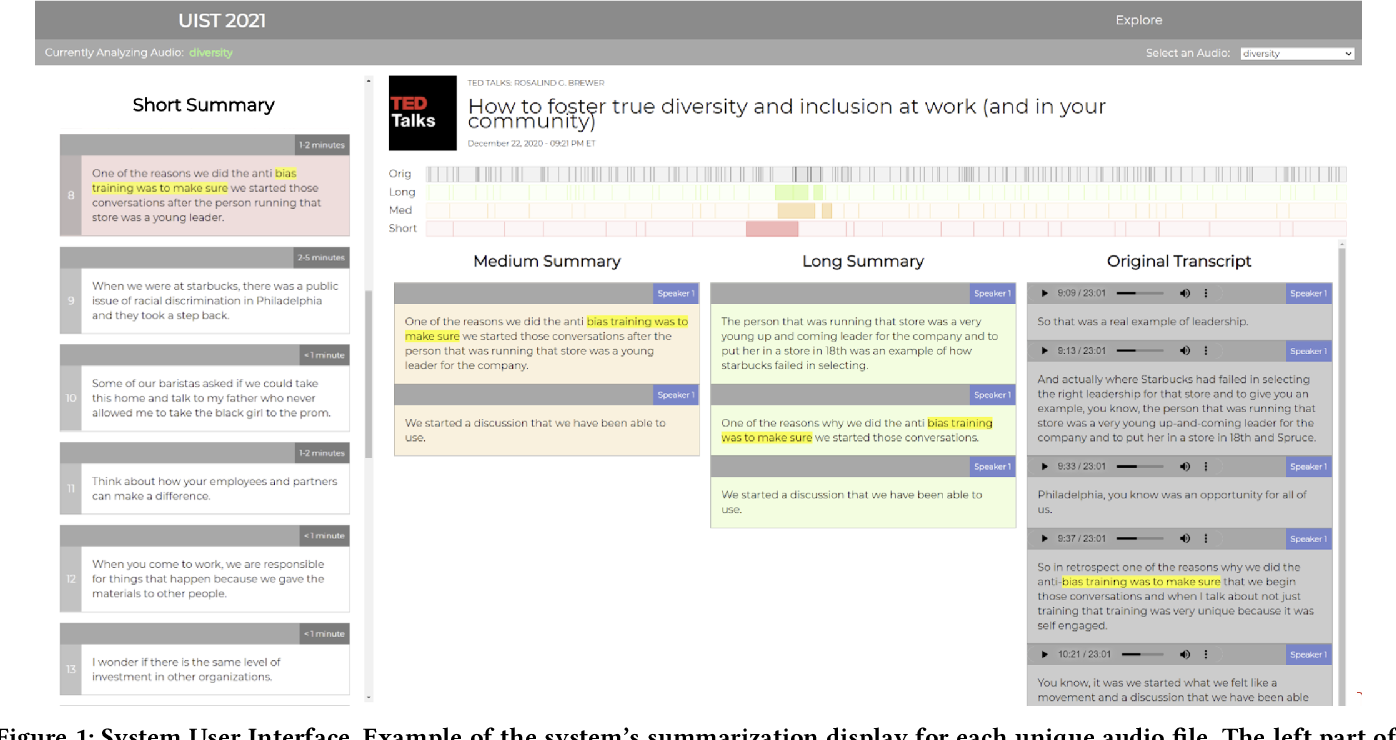 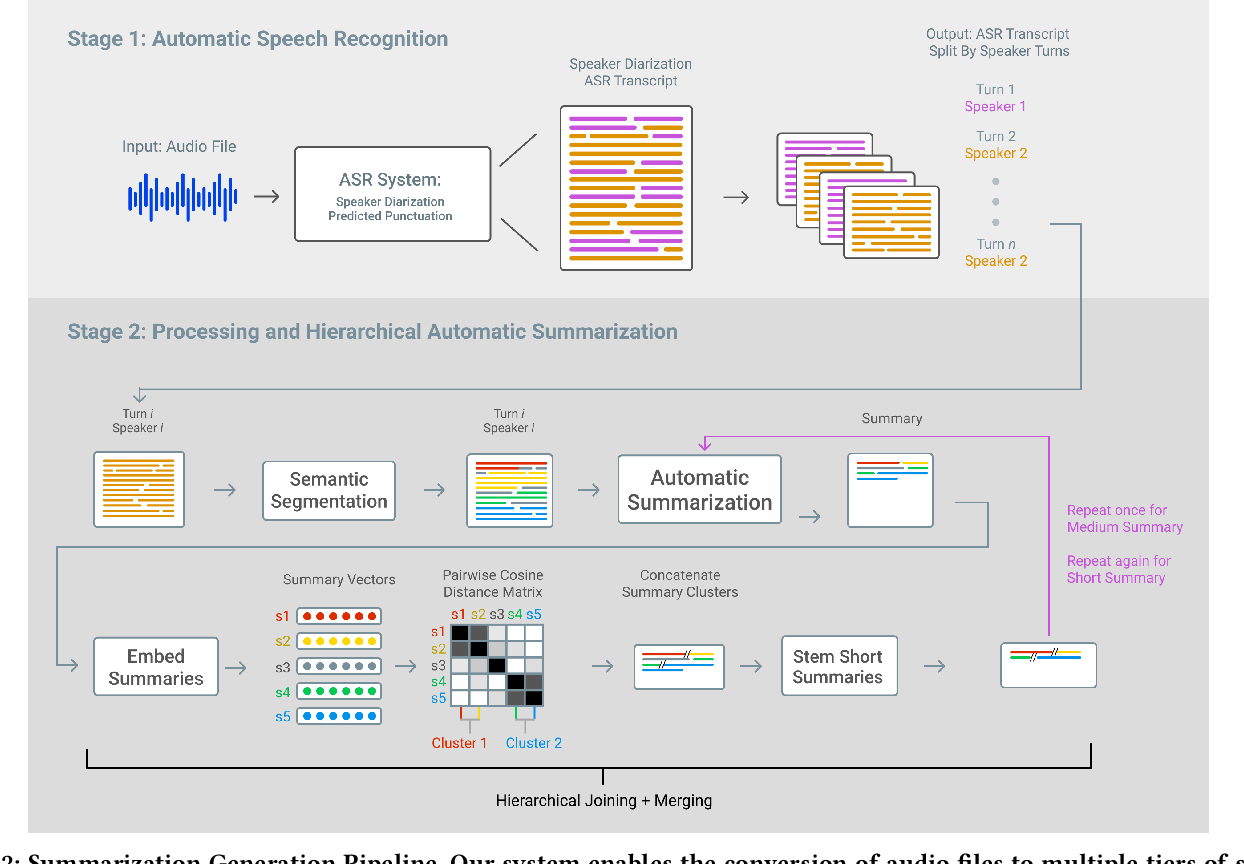 Every day we are surrounded by spoken dialog. This medium delivers rich diverse streams of information auditorily; however, systematically understanding dialog can often be non-trivial. Despite the pervasiveness of spoken dialog, automated speech understanding and quality information extraction remains markedly poor, especially when compared to written prose. Furthermore, compared to understanding text, auditory communication poses many additional challenges such as speaker disfluencies, informal prose styles, and lack of structure. These concerns all demonstrate the need for a distinctly speech tailored interactive system to help users understand and navigate the spoken language domain. While individual automatic speech recognition (ASR) and text summarization methods already exist, they are imperfect technologies; neither consider user purpose and intent nor address spoken language induced complications. Consequently, we design a two stage ASR and text summarization pipeline and propose a set of semantic segmentation and merging algorithms to resolve these speech modeling challenges. Our system enables users to easily browse and navigate content as well as recover from errors in these underlying technologies. Finally, we present an evaluation of the system which highlights user preference for hierarchical summarization as a tool to quickly skim audio and identify content of interest to the user. 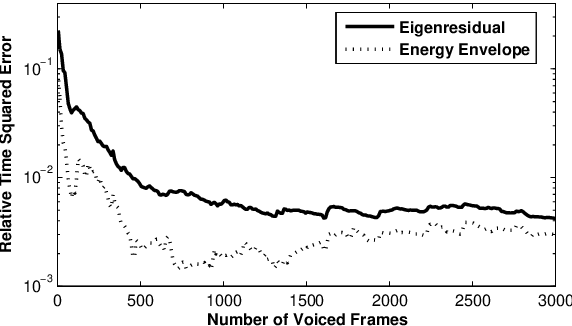 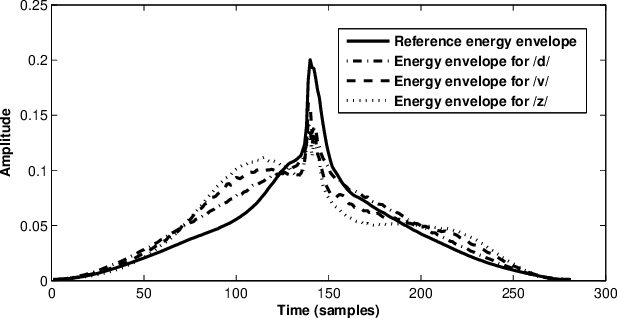 The modeling of speech production often relies on a source-filter approach. Although methods parameterizing the filter have nowadays reached a certain maturity, there is still a lot to be gained for several speech processing applications in finding an appropriate excitation model. This manuscript presents a Deterministic plus Stochastic Model (DSM) of the residual signal. The DSM consists of two contributions acting in two distinct spectral bands delimited by a maximum voiced frequency. Both components are extracted from an analysis performed on a speaker-dependent dataset of pitch-synchronous residual frames. The deterministic part models the low-frequency contents and arises from an orthonormal decomposition of these frames. As for the stochastic component, it is a high-frequency noise modulated both in time and frequency. Some interesting phonetic and computational properties of the DSM are also highlighted. The applicability of the DSM in two fields of speech processing is then studied. First, it is shown that incorporating the DSM vocoder in HMM-based speech synthesis enhances the delivered quality. The proposed approach turns out to significantly outperform the traditional pulse excitation and provides a quality equivalent to STRAIGHT. In a second application, the potential of glottal signatures derived from the proposed DSM is investigated for speaker identification purpose. Interestingly, these signatures are shown to lead to better recognition rates than other glottal-based methods.