Should We Always Separate?: Switching Between Enhanced and Observed Signals for Overlapping Speech Recognition 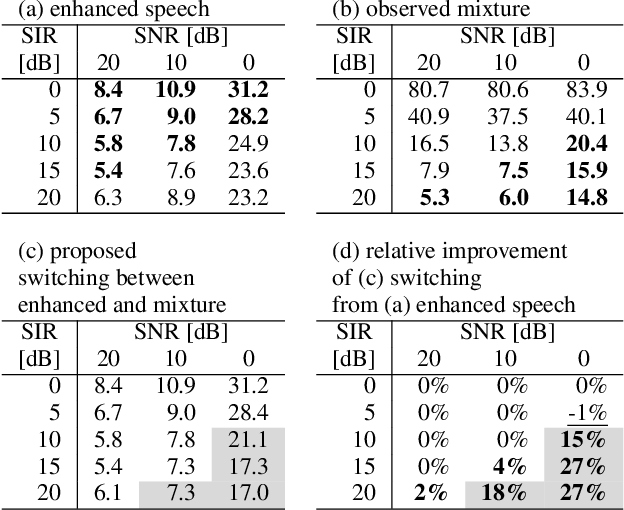 Although recent advances in deep learning technology improved automatic speech recognition (ASR), it remains difficult to recognize speech when it overlaps other people's voices. Speech separation or extraction is often used as a front-end to ASR to handle such overlapping speech. However, deep neural network-based speech enhancement can generate `processing artifacts' as a side effect of the enhancement, which degrades ASR performance. For example, it is well known that single-channel noise reduction for non-speech noise (non-overlapping speech) often does not improve ASR. Likewise, the processing artifacts may also be detrimental to ASR in some conditions when processing overlapping speech with a separation/extraction method, although it is usually believed that separation/extraction improves ASR. In order to answer the question `Do we always have to separate/extract speech from mixtures?', we analyze ASR performance on observed and enhanced speech at various noise and interference conditions, and show that speech enhancement degrades ASR under some conditions even for overlapping speech. Based on these findings, we propose a simple switching algorithm between observed and enhanced speech based on the estimated signal-to-interference ratio and signal-to-noise ratio. We demonstrated experimentally that such a simple switching mechanism can improve recognition performance when processing artifacts are detrimental to ASR.

E-ffective: A Visual Analytic System for Exploring the Emotion and Effectiveness of Inspirational Speeches 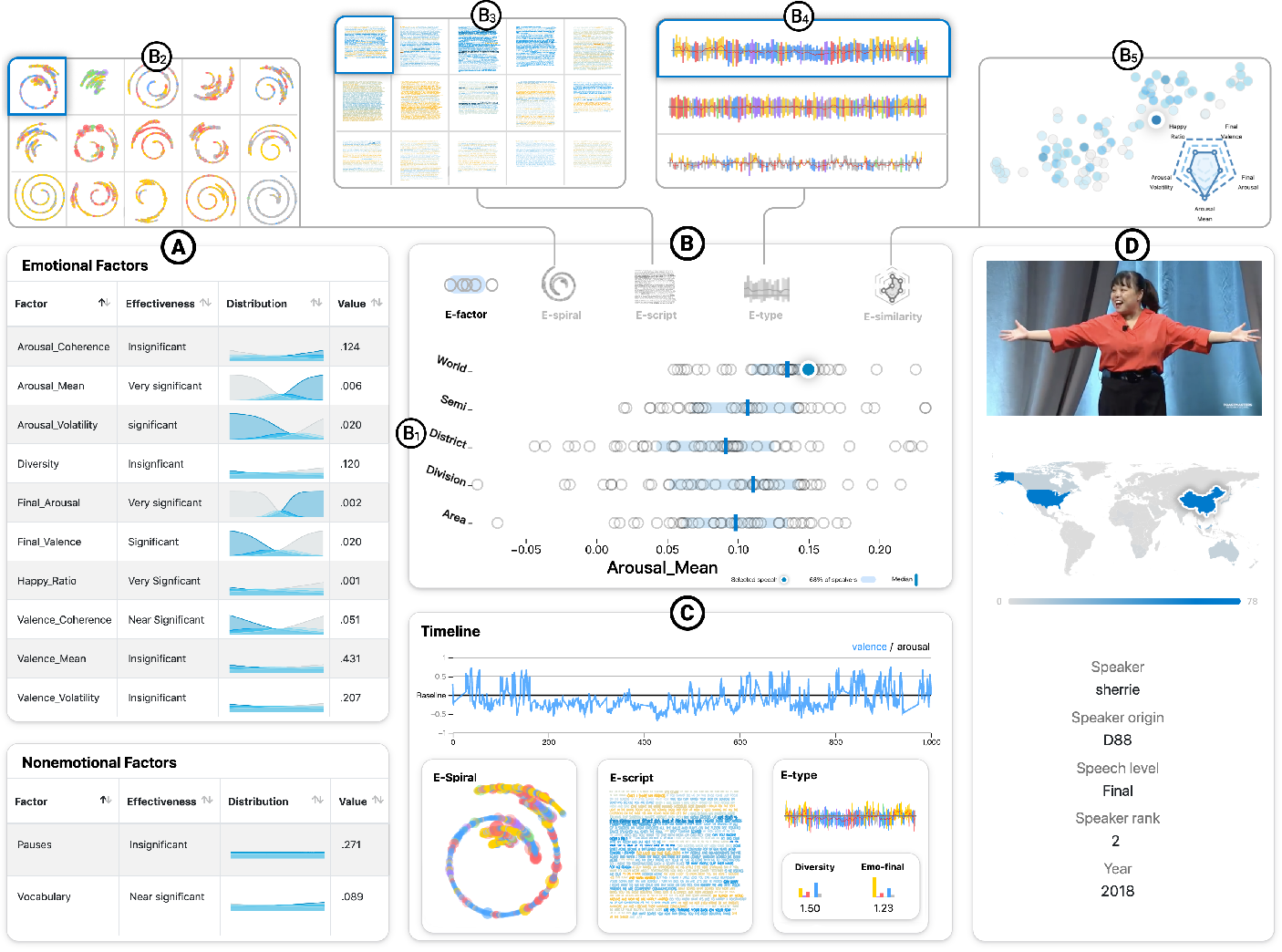 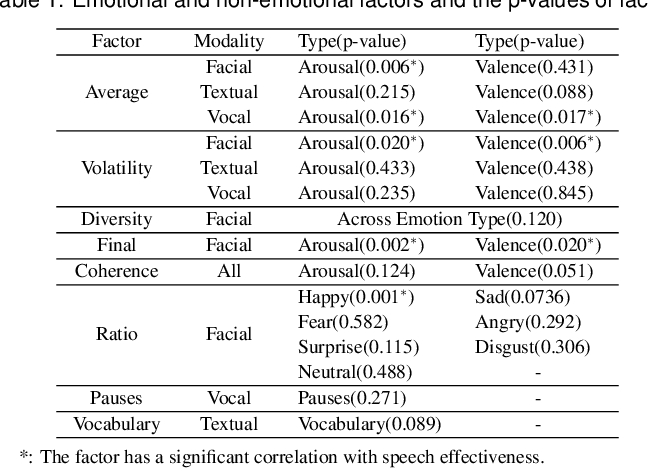 What makes speeches effective has long been a subject for debate, and until today there is broad controversy among public speaking experts about what factors make a speech effective as well as the roles of these factors in speeches. Moreover, there is a lack of quantitative analysis methods to help understand effective speaking strategies. In this paper, we propose E-ffective, a visual analytic system allowing speaking experts and novices to analyze both the role of speech factors and their contribution in effective speeches. From interviews with domain experts and investigating existing literature, we identified important factors to consider in inspirational speeches. We obtained the generated factors from multi-modal data that were then related to effectiveness data. Our system supports rapid understanding of critical factors in inspirational speeches, including the influence of emotions by means of novel visualization methods and interaction. Two novel visualizations include E-spiral (that shows the emotional shifts in speeches in a visually compact way) and E-script (that connects speech content with key speech delivery information). In our evaluation we studied the influence of our system on experts' domain knowledge about speech factors. We further studied the usability of the system by speaking novices and experts on assisting analysis of inspirational speech effectiveness.

Learning a new language involves constantly comparing speech productions with reference productions from the environment. Early in speech acquisition, children make articulatory adjustments to match their caregivers' speech. Grownup learners of a language tweak their speech to match the tutor reference. This paper proposes a method to synthetically generate correct pronunciation feedback given incorrect production. Furthermore, our aim is to generate the corrected production while maintaining the speaker's original voice. The system prompts the user to pronounce a phrase. The speech is recorded, and the samples associated with the inaccurate phoneme are masked with zeros. This waveform serves as an input to a speech generator, implemented as a deep learning inpainting system with a U-net architecture, and trained to output a reconstructed speech. The training set is composed of unimpaired proper speech examples, and the generator is trained to reconstruct the original proper speech. We evaluated the performance of our system on phoneme replacement of minimal pair words of English as well as on children with pronunciation disorders. Results suggest that human listeners slightly prefer our generated speech over a smoothed replacement of the inaccurate phoneme with a production of a different speaker.


* under submission to Interspeech 2022 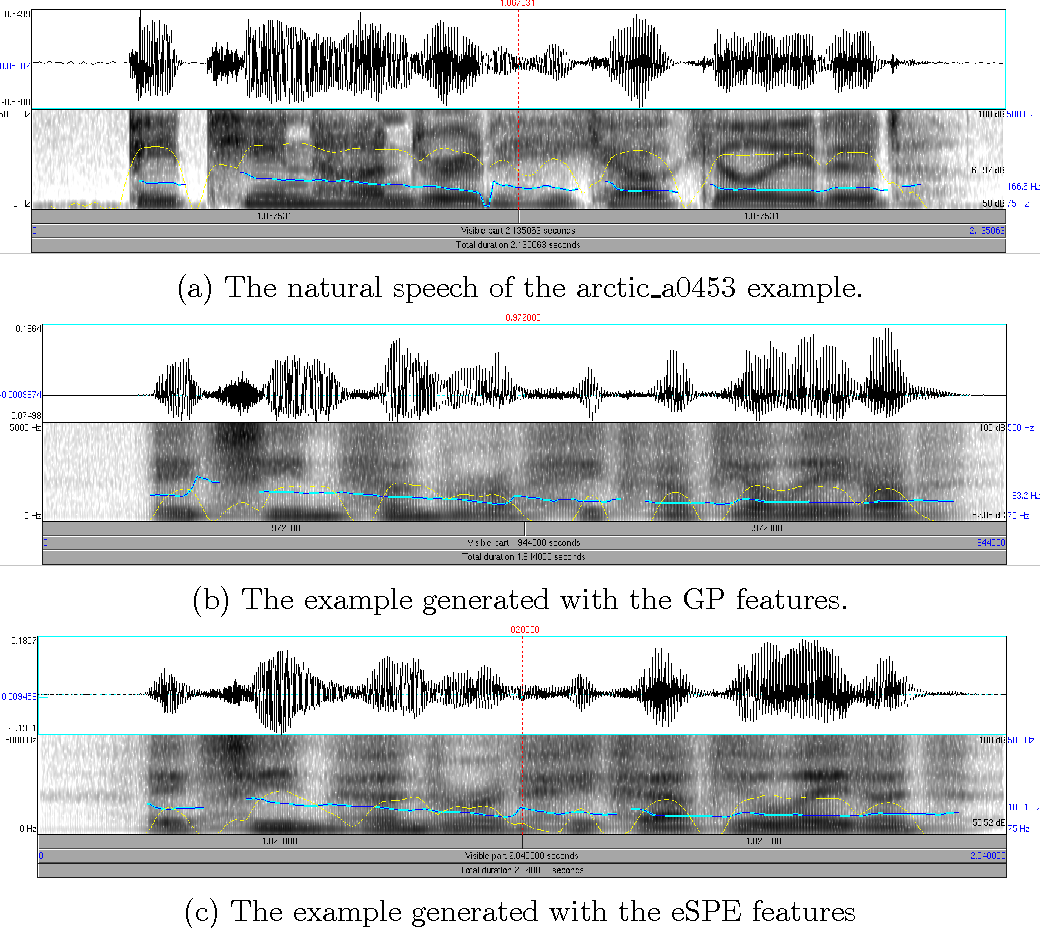 Using phonological speech vocoding, we propose a platform for exploring relations between phonology and speech processing, and in broader terms, for exploring relations between the abstract and physical structures of a speech signal. Our goal is to make a step towards bridging phonology and speech processing and to contribute to the program of Laboratory Phonology. We show three application examples for laboratory phonology: compositional phonological speech modelling, a comparison of phonological systems and an experimental phonological parametric text-to-speech (TTS) system. The featural representations of the following three phonological systems are considered in this work: (i) Government Phonology (GP), (ii) the Sound Pattern of English (SPE), and (iii) the extended SPE (eSPE). Comparing GP- and eSPE-based vocoded speech, we conclude that the latter achieves slightly better results than the former. However, GP - the most compact phonological speech representation - performs comparably to the systems with a higher number of phonological features. The parametric TTS based on phonological speech representation, and trained from an unlabelled audiobook in an unsupervised manner, achieves intelligibility of 85% of the state-of-the-art parametric speech synthesis. We envision that the presented approach paves the way for researchers in both fields to form meaningful hypotheses that are explicitly testable using the concepts developed and exemplified in this paper. On the one hand, laboratory phonologists might test the applied concepts of their theoretical models, and on the other hand, the speech processing community may utilize the concepts developed for the theoretical phonological models for improvements of the current state-of-the-art applications.

Recently, it has become easier to obtain speech data from various media such as the internet or YouTube, but directly utilizing them to train a neural text-to-speech (TTS) model is difficult. The proportion of clean speech is insufficient and the remainder includes background music. Even with the global style token (GST). Therefore, we propose the following method to successfully train an end-to-end TTS model with limited broadcast data. First, the background music is removed from the speech by introducing a music filter. Second, the GST-TTS model with an auxiliary quality classifier is trained with the filtered speech and a small amount of clean speech. In particular, the quality classifier makes the embedding vector of the GST layer focus on representing the speech quality (filtered or clean) of the input speech. The experimental results verified that the proposed method synthesized much more high-quality speech than conventional methods. 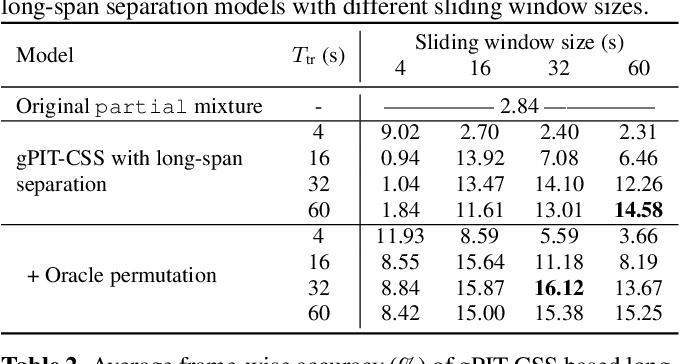 Multi-talker conversational speech processing has drawn many interests for various applications such as meeting transcription. Speech separation is often required to handle overlapped speech that is commonly observed in conversation. Although the original utterancelevel permutation invariant training-based continuous speech separation approach has proven to be effective in various conditions, it lacks the ability to leverage the long-span relationship of utterances and is computationally inefficient due to the highly overlapped sliding windows. To overcome these drawbacks, we propose a novel training scheme named Group-PIT, which allows direct training of the speech separation models on the long-form speech with a low computational cost for label assignment. Two different speech separation approaches with Group-PIT are explored, including direct long-span speech separation and short-span speech separation with long-span tracking. The experiments on the simulated meeting-style data demonstrate the effectiveness of our proposed approaches, especially in dealing with a very long speech input. 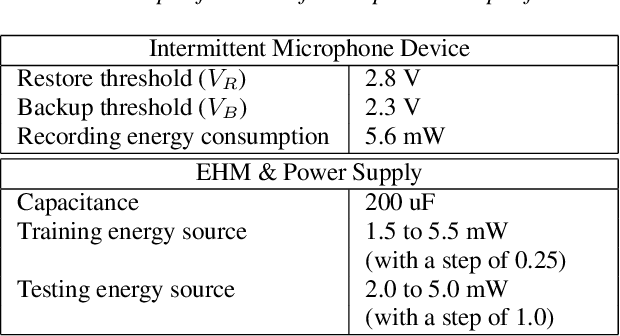 A large number of Internet of Things (IoT) devices today are powered by batteries, which are often expensive to maintain and may cause serious environmental pollution. To avoid these problems, researchers have begun to consider the use of energy systems based on energy-harvesting units for such devices. However, the power harvested from an ambient source is fundamentally small and unstable, resulting in frequent power failures during the operation of IoT applications involving, for example, intermittent speech signals and the streaming of videos. This paper presents a deep-learning-based speech recovery system that reconstructs intermittent speech signals from self-powered IoT devices. Our intermittent speech recovery system (ISR) consists of three stages: interpolation, recovery, and combination. The experimental results show that our recovery system increases speech quality by up to 707.1%, while increasing speech intelligibility by up to 92.1%. Most importantly, our ISR system also enhances the WER scores by up to 65.6%. To the best of our knowledge, this study is one of the first to reconstruct intermittent speech signals from self-powered-sensing IoT devices. These promising results suggest that even though self powered microphone devices function with weak energy sources, our ISR system can still maintain the performance of most speech-signal-based applications. 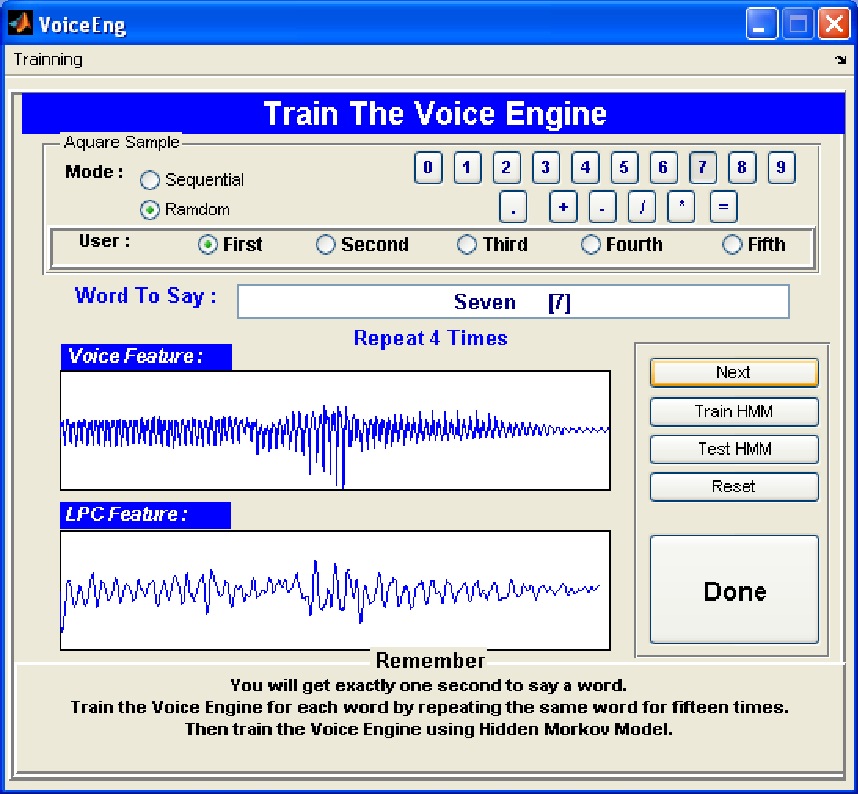 This software project based paper is for a vision of the near future in which computer interaction is characterized by natural face-to-face conversations with lifelike characters that speak, emote, and gesture. The first step is speech. The dream of a true virtual reality, a complete human-computer interaction system will not come true unless we try to give some perception to machine and make it perceive the outside world as humans communicate with each other. This software project is under development for listening and replying machine (Computer) through speech. The Speech interface is developed to convert speech input into some parametric form (Speech-to-Text) for further processing and the results, text output to speech synthesis (Text-to-Speech)