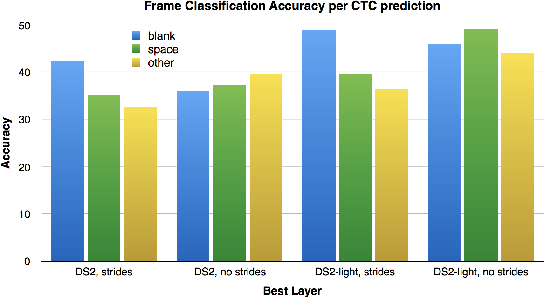 Neural models have become ubiquitous in automatic speech recognition systems. While neural networks are typically used as acoustic models in more complex systems, recent studies have explored end-to-end speech recognition systems based on neural networks, which can be trained to directly predict text from input acoustic features. Although such systems are conceptually elegant and simpler than traditional systems, it is less obvious how to interpret the trained models. In this work, we analyze the speech representations learned by a deep end-to-end model that is based on convolutional and recurrent layers, and trained with a connectionist temporal classification (CTC) loss. We use a pre-trained model to generate frame-level features which are given to a classifier that is trained on frame classification into phones. We evaluate representations from different layers of the deep model and compare their quality for predicting phone labels. Our experiments shed light on important aspects of the end-to-end model such as layer depth, model complexity, and other design choices. 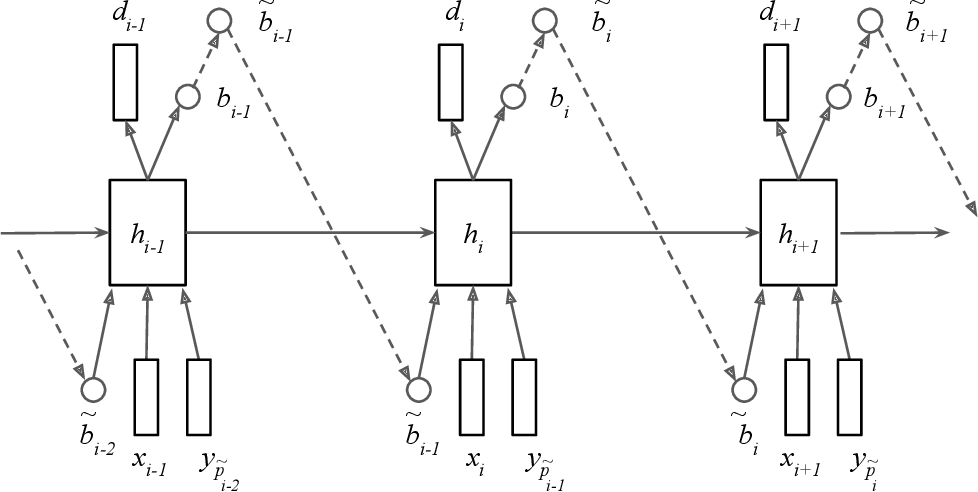 Generative models have long been the dominant approach for speech recognition. The success of these models however relies on the use of sophisticated recipes and complicated machinery that is not easily accessible to non-practitioners. Recent innovations in Deep Learning have given rise to an alternative - discriminative models called Sequence-to-Sequence models, that can almost match the accuracy of state of the art generative models. While these models are easy to train as they can be trained end-to-end in a single step, they have a practical limitation that they can only be used for offline recognition. This is because the models require that the entirety of the input sequence be available at the beginning of inference, an assumption that is not valid for instantaneous speech recognition. To address this problem, online sequence-to-sequence models were recently introduced. These models are able to start producing outputs as data arrives, and the model feels confident enough to output partial transcripts. These models, like sequence-to-sequence are causal - the output produced by the model until any time, $t$, affects the features that are computed subsequently. This makes the model inherently more powerful than generative models that are unable to change features that are computed from the data. This paper highlights two main contributions - an improvement to online sequence-to-sequence model training, and its application to noisy settings with mixed speech from two speakers. 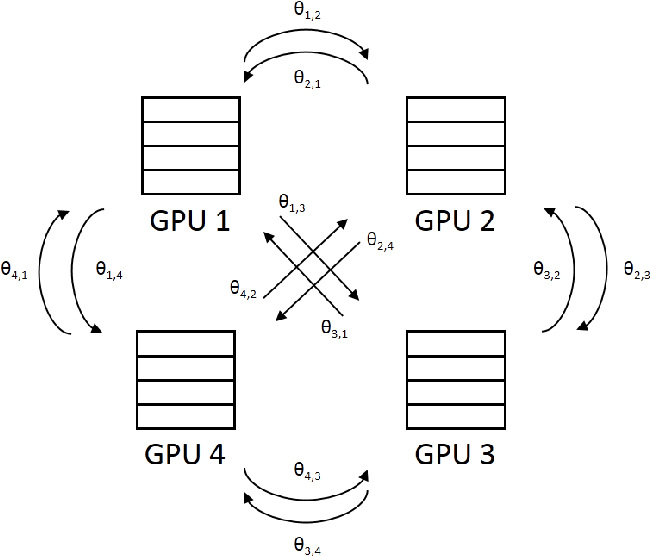 Recurrent neural networks (RNNs), especially long short-term memory (LSTM) RNNs, are effective network for sequential task like speech recognition. Deeper LSTM models perform well on large vocabulary continuous speech recognition, because of their impressive learning ability. However, it is more difficult to train a deeper network. We introduce a training framework with layer-wise training and exponential moving average methods for deeper LSTM models. It is a competitive framework that LSTM models of more than 7 layers are successfully trained on Shenma voice search data in Mandarin and they outperform the deep LSTM models trained by conventional approach. Moreover, in order for online streaming speech recognition applications, the shallow model with low real time factor is distilled from the very deep model. The recognition accuracy have little loss in the distillation process. Therefore, the model trained with the proposed training framework reduces relative 14\% character error rate, compared to original model which has the similar real-time capability. Furthermore, the novel transfer learning strategy with segmental Minimum Bayes-Risk is also introduced in the framework. The strategy makes it possible that training with only a small part of dataset could outperform full dataset training from the beginning. 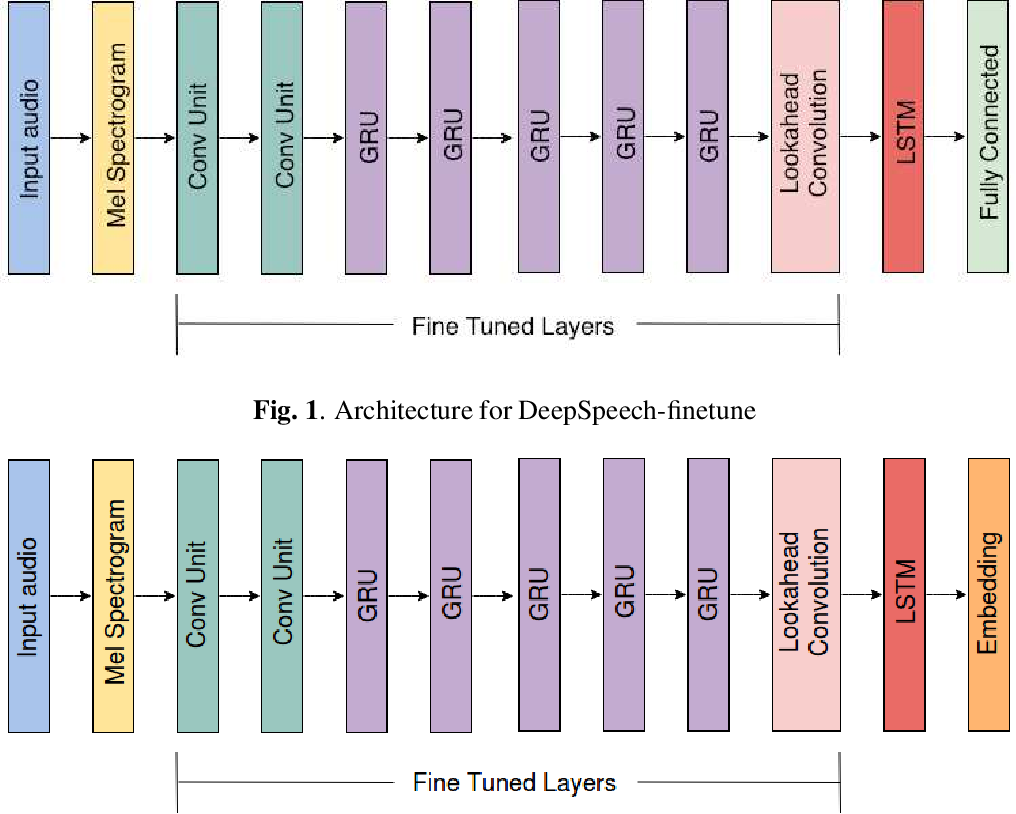 Continuous Speech Keyword Spotting (CSKS) is the problem of spotting keywords in recorded conversations, when a small number of instances of keywords are available in training data. Unlike the more common Keyword Spotting, where an algorithm needs to detect lone keywords or short phrases like "Alexa", "Cortana", "Hi Alexa!", "Whatsup Octavia?" etc. in speech, CSKS needs to filter out embedded words from a continuous flow of speech, ie. spot "Anna" and "github" in "I know a developer named Anna who can look into this github issue." Apart from the issue of limited training data availability, CSKS is an extremely imbalanced classification problem. We address the limitations of simple keyword spotting baselines for both aforementioned challenges by using a novel combination of loss functions (Prototypical networks' loss and metric loss) and transfer learning. Our method improves F1 score by over 10%. 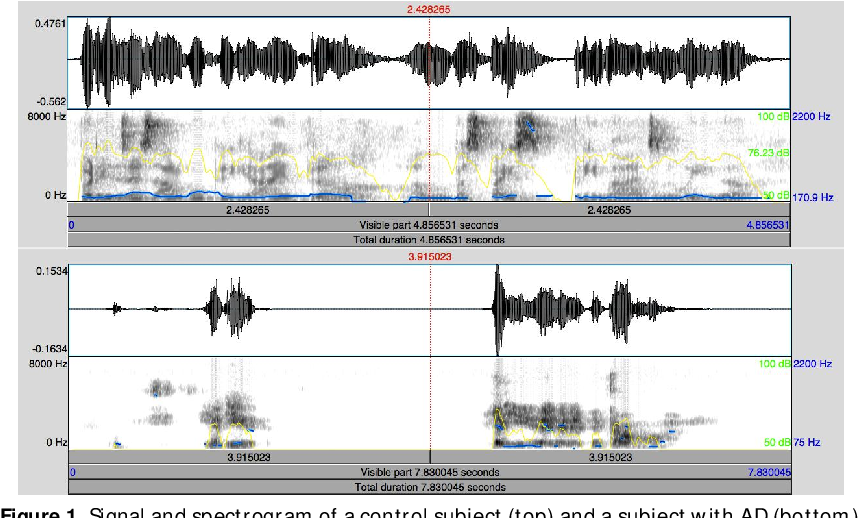 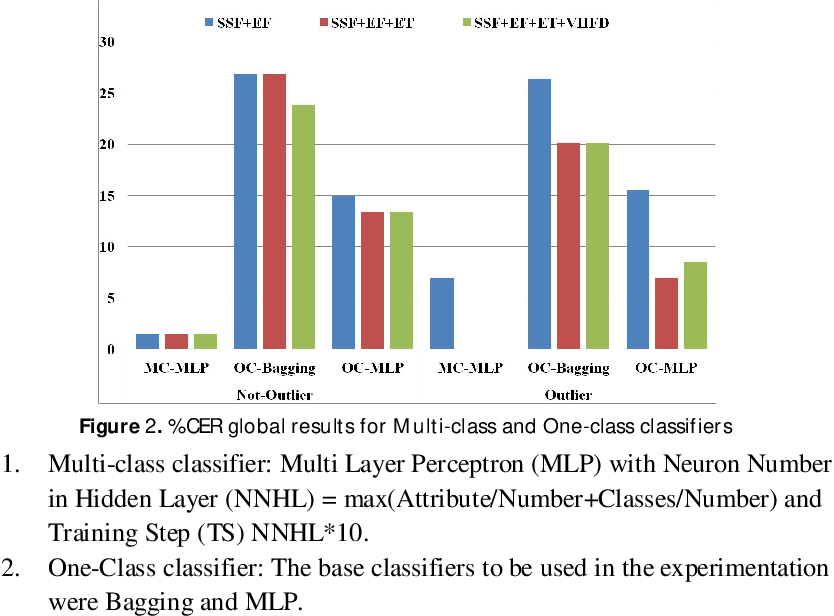 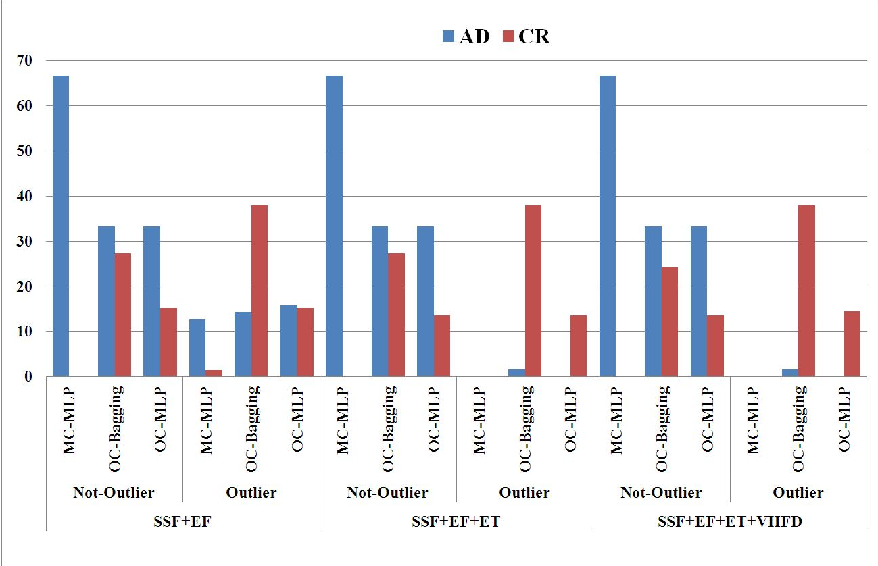 Most of medical developments require the ability to identify samples that are anomalous with respect to a target group or control group, in the sense they could belong to a new, previously unseen class or are not class data. In this case when there are not enough data to train two-class One-class classification appear like an available solution. On the other hand non-linear approaches could give very useful information. The aim of our project is to contribute to earlier diagnosis of AD and better estimates of its severity by using automatic analysis performed through new biomarkers extracted from speech signal. The methods selected in this case are speech biomarkers oriented to Spontaneous Speech and Emotional Response Analysis. In this approach One-class classifiers and two-class classifiers are analyzed. The use of information about outlier and Fractal Dimension features improves the system performance.

Automatic speech recognition (ASR) systems often need to be developed for extremely low-resource languages to serve end-uses such as audio content categorization and search. While universal phone recognition is natural to consider when no transcribed speech is available to train an ASR system in a language, adapting universal phone models using very small amounts (minutes rather than hours) of transcribed speech also needs to be studied, particularly with state-of-the-art DNN-based acoustic models. The DARPA LORELEI program provides a framework for such very-low-resource ASR studies, and provides an extrinsic metric for evaluating ASR performance in a humanitarian assistance, disaster relief setting. This paper presents our Kaldi-based systems for the program, which employ a universal phone modeling approach to ASR, and describes recipes for very rapid adaptation of this universal ASR system. The results we obtain significantly outperform results obtained by many competing approaches on the NIST LoReHLT 2017 Evaluation datasets.


* Accepted for publication at Interspeech 2018 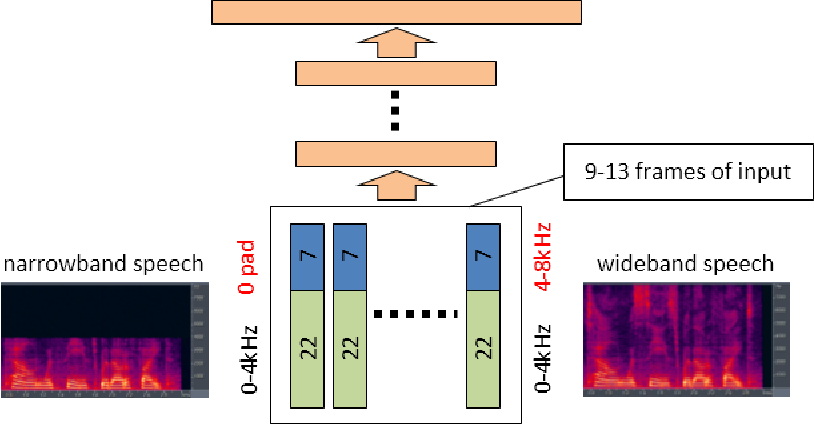 Recent studies have shown that deep neural networks (DNNs) perform significantly better than shallow networks and Gaussian mixture models (GMMs) on large vocabulary speech recognition tasks. In this paper, we argue that the improved accuracy achieved by the DNNs is the result of their ability to extract discriminative internal representations that are robust to the many sources of variability in speech signals. We show that these representations become increasingly insensitive to small perturbations in the input with increasing network depth, which leads to better speech recognition performance with deeper networks. We also show that DNNs cannot extrapolate to test samples that are substantially different from the training examples. If the training data are sufficiently representative, however, internal features learned by the DNN are relatively stable with respect to speaker differences, bandwidth differences, and environment distortion. This enables DNN-based recognizers to perform as well or better than state-of-the-art systems based on GMMs or shallow networks without the need for explicit model adaptation or feature normalization. 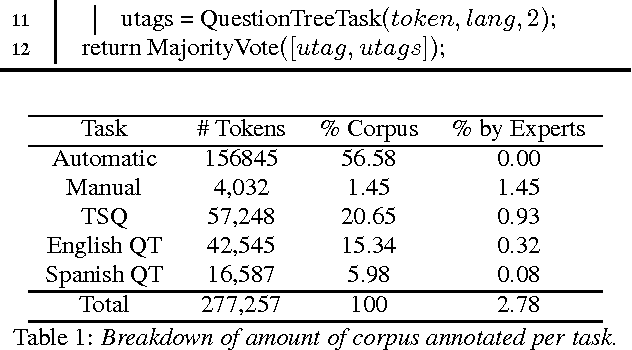 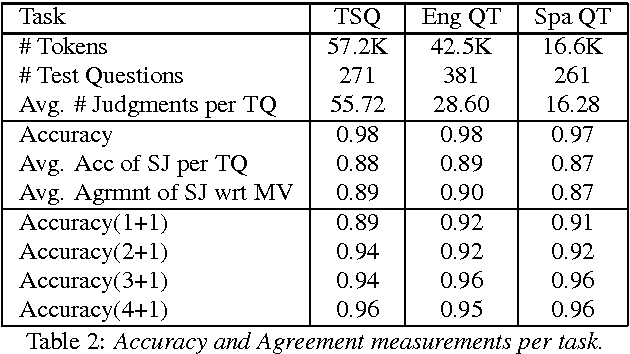 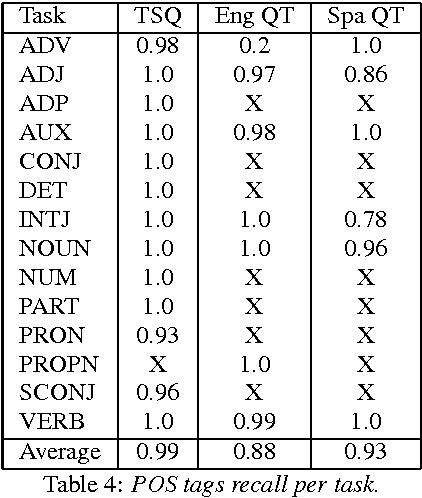 Code-switching is the phenomenon by which bilingual speakers switch between multiple languages during communication. The importance of developing language technologies for codeswitching data is immense, given the large populations that routinely code-switch. High-quality linguistic annotations are extremely valuable for any NLP task, and performance is often limited by the amount of high-quality labeled data. However, little such data exists for code-switching. In this paper, we describe crowd-sourcing universal part-of-speech tags for the Miami Bangor Corpus of Spanish-English code-switched speech. We split the annotation task into three subtasks: one in which a subset of tokens are labeled automatically, one in which questions are specifically designed to disambiguate a subset of high frequency words, and a more general cascaded approach for the remaining data in which questions are displayed to the worker following a decision tree structure. Each subtask is extended and adapted for a multilingual setting and the universal tagset. The quality of the annotation process is measured using hidden check questions annotated with gold labels. The overall agreement between gold standard labels and the majority vote is between 0.95 and 0.96 for just three labels and the average recall across part-of-speech tags is between 0.87 and 0.99, depending on the task. 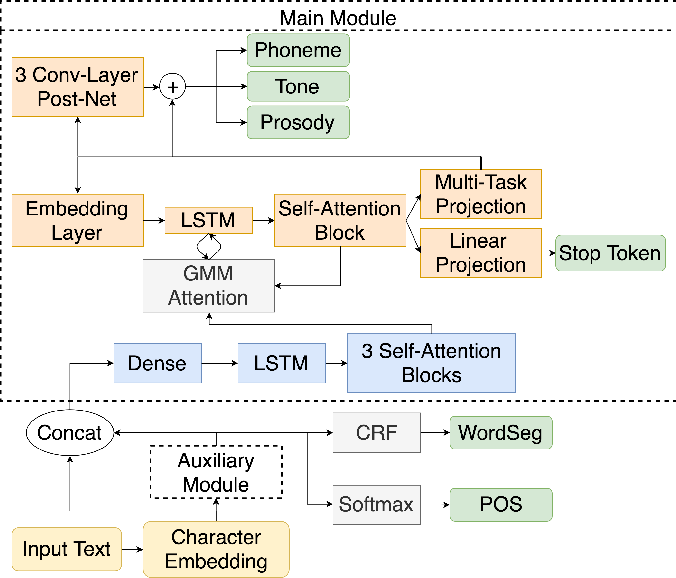 In Mandarin text-to-speech (TTS) system, the front-end text processing module significantly influences the intelligibility and naturalness of synthesized speech. Building a typical pipeline-based front-end which consists of multiple individual components requires extensive efforts. In this paper, we proposed a unified sequence-to-sequence front-end model for Mandarin TTS that converts raw texts to linguistic features directly. Compared to the pipeline-based front-end, our unified front-end can achieve comparable performance in polyphone disambiguation and prosody word prediction, and improve intonation phrase prediction by 0.0738 in F1 score. We also implemented the unified front-end with Tacotron and WaveRNN to build a Mandarin TTS system. The synthesized speech by that got a comparable MOS (4.38) with the pipeline-based front-end (4.37) and close to human recordings (4.49). 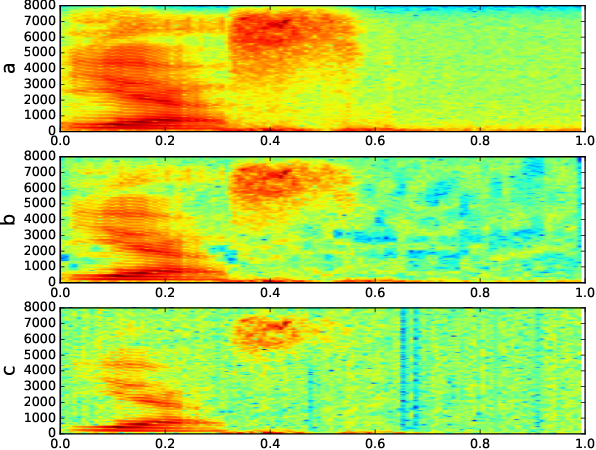 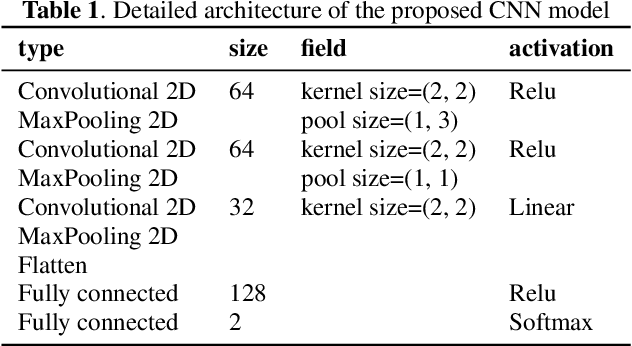 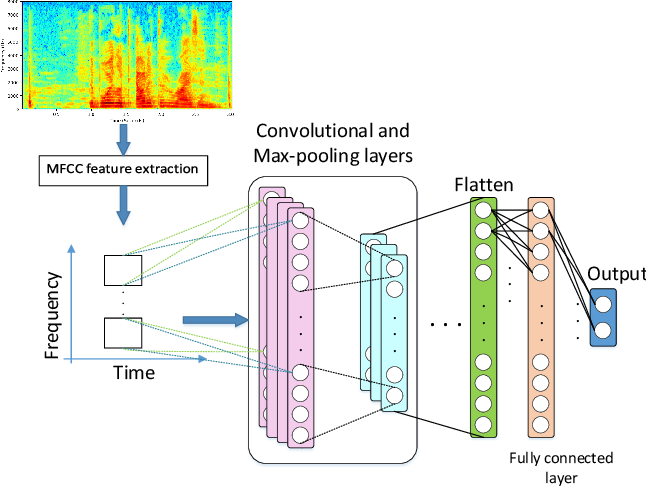 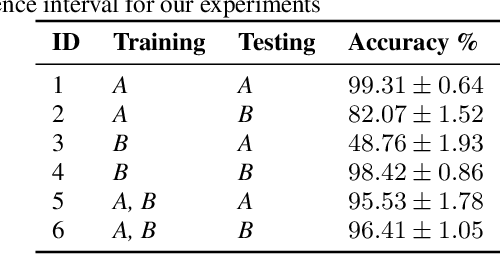 Machine Learning systems are vulnerable to adversarial attacks and will highly likely produce incorrect outputs under these attacks. There are white-box and black-box attacks regarding to adversary's access level to the victim learning algorithm. To defend the learning systems from these attacks, existing methods in the speech domain focus on modifying input signals and testing the behaviours of speech recognizers. We, however, formulate the defense as a classification problem and present a strategy for systematically generating adversarial example datasets: one for white-box attacks and one for black-box attacks, containing both adversarial and normal examples. The white-box attack is a gradient-based method on Baidu DeepSpeech with the Mozilla Common Voice database while the black-box attack is a gradient-free method on a deep model-based keyword spotting system with the Google Speech Command dataset. The generated datasets are used to train a proposed Convolutional Neural Network (CNN), together with cepstral features, to detect adversarial examples. Experimental results show that, it is possible to accurately distinct between adversarial and normal examples for known attacks, in both single-condition and multi-condition training settings, while the performance degrades dramatically for unknown attacks. The adversarial datasets and the source code are made publicly available.