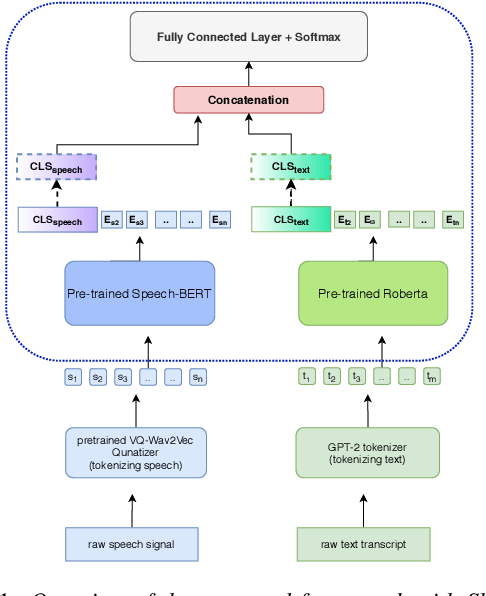 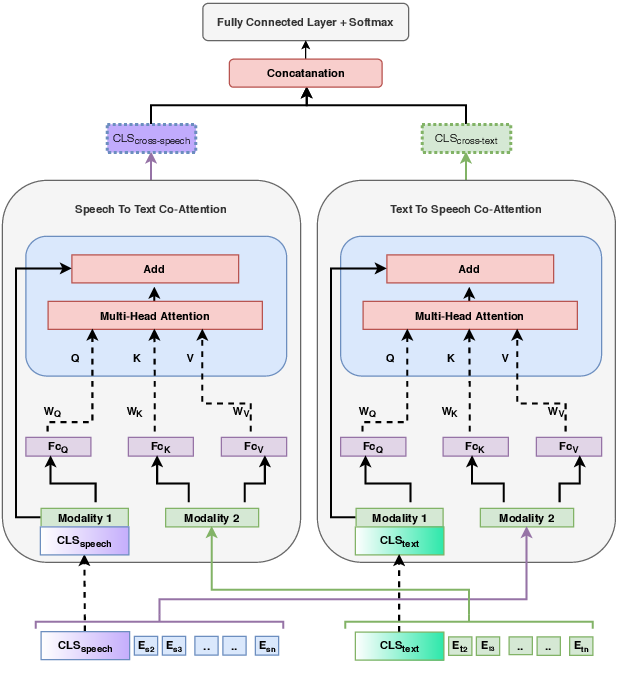 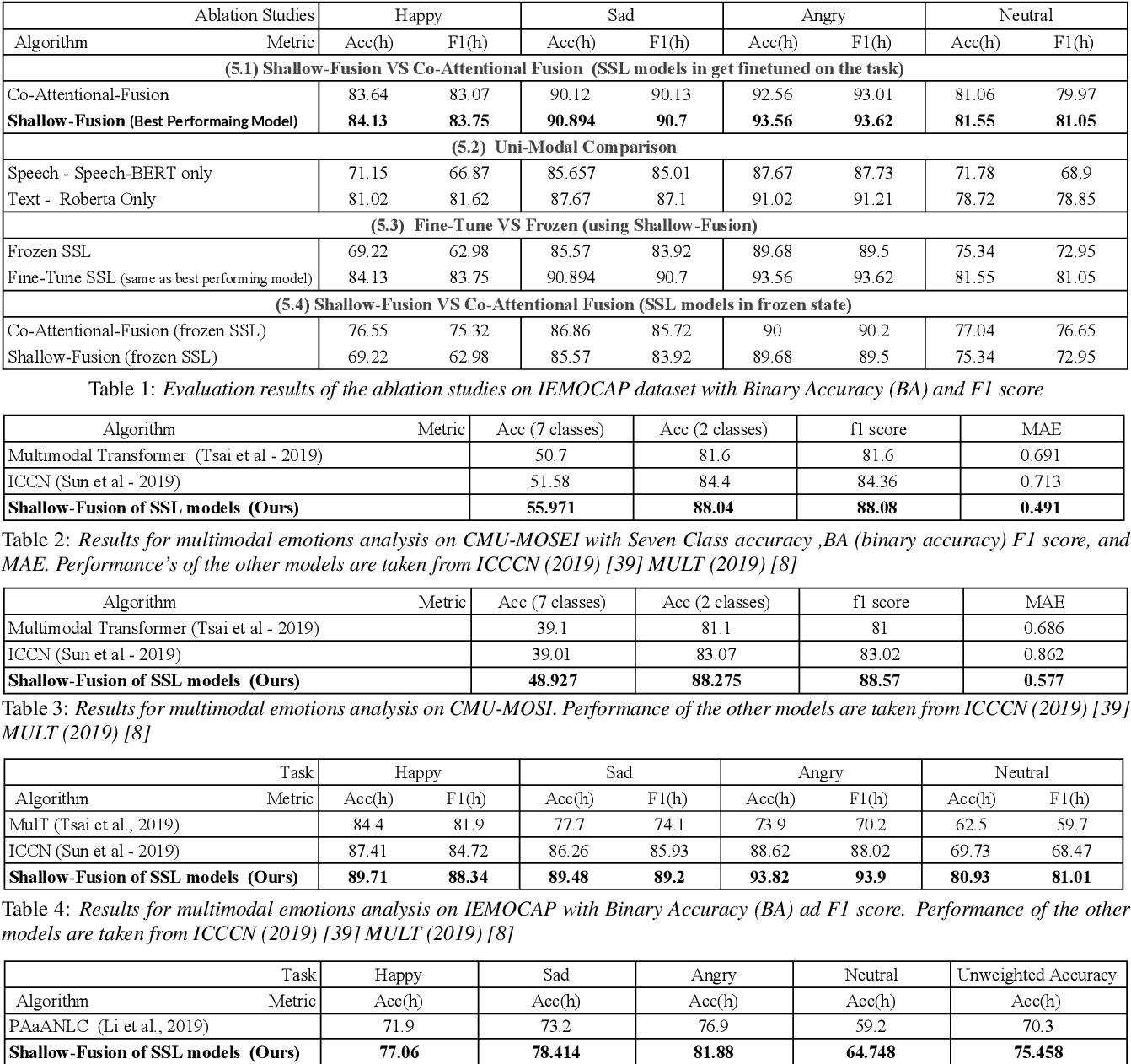 Multimodal emotion recognition from speech is an important area in affective computing. Fusing multiple data modalities and learning representations with limited amounts of labeled data is a challenging task. In this paper, we explore the use of modality-specific "BERT-like" pretrained Self Supervised Learning (SSL) architectures to represent both speech and text modalities for the task of multimodal speech emotion recognition. By conducting experiments on three publicly available datasets (IEMOCAP, CMU-MOSEI, and CMU-MOSI), we show that jointly fine-tuning "BERT-like" SSL architectures achieve state-of-the-art (SOTA) results. We also evaluate two methods of fusing speech and text modalities and show that a simple fusion mechanism can outperform more complex ones when using SSL models that have similar architectural properties to BERT. 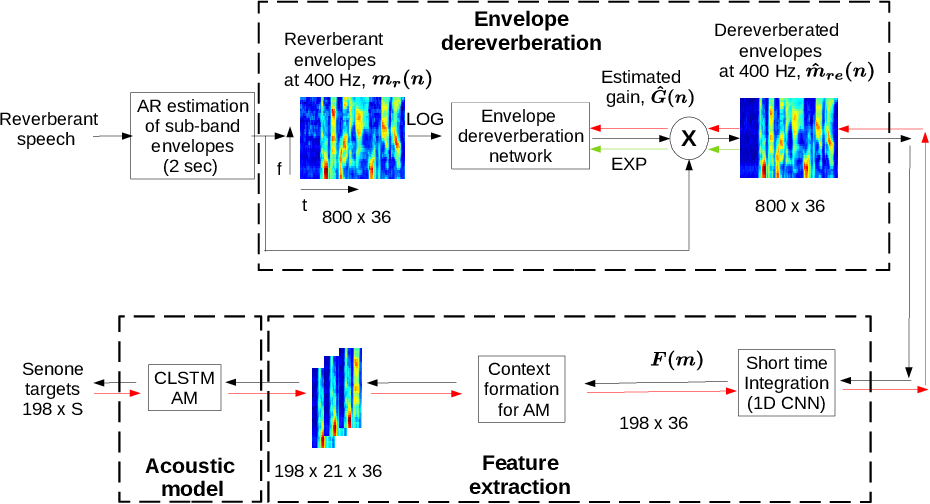 The task of speech recognition in far-field environments is adversely affected by the reverberant artifacts that elicit as the temporal smearing of the sub-band envelopes. In this paper, we develop a neural model for speech dereverberation using the long-term sub-band envelopes of speech. The sub-band envelopes are derived using frequency domain linear prediction (FDLP) which performs an autoregressive estimation of the Hilbert envelopes. The neural dereverberation model estimates the envelope gain which when applied to reverberant signals suppresses the late reflection components in the far-field signal. The dereverberated envelopes are used for feature extraction in speech recognition. Further, the sequence of steps involved in envelope dereverberation, feature extraction and acoustic modeling for ASR can be implemented as a single neural processing pipeline which allows the joint learning of the dereverberation network and the acoustic model. Several experiments are performed on the REVERB challenge dataset, CHiME-3 dataset and VOiCES dataset. In these experiments, the joint learning of envelope dereverberation and acoustic model yields significant performance improvements over the baseline ASR system based on log-mel spectrogram as well as other past approaches for dereverberation (average relative improvements of 10-24% over the baseline system). A detailed analysis on the choice of hyper-parameters and the cost function involved in envelope dereverberation is also provided. 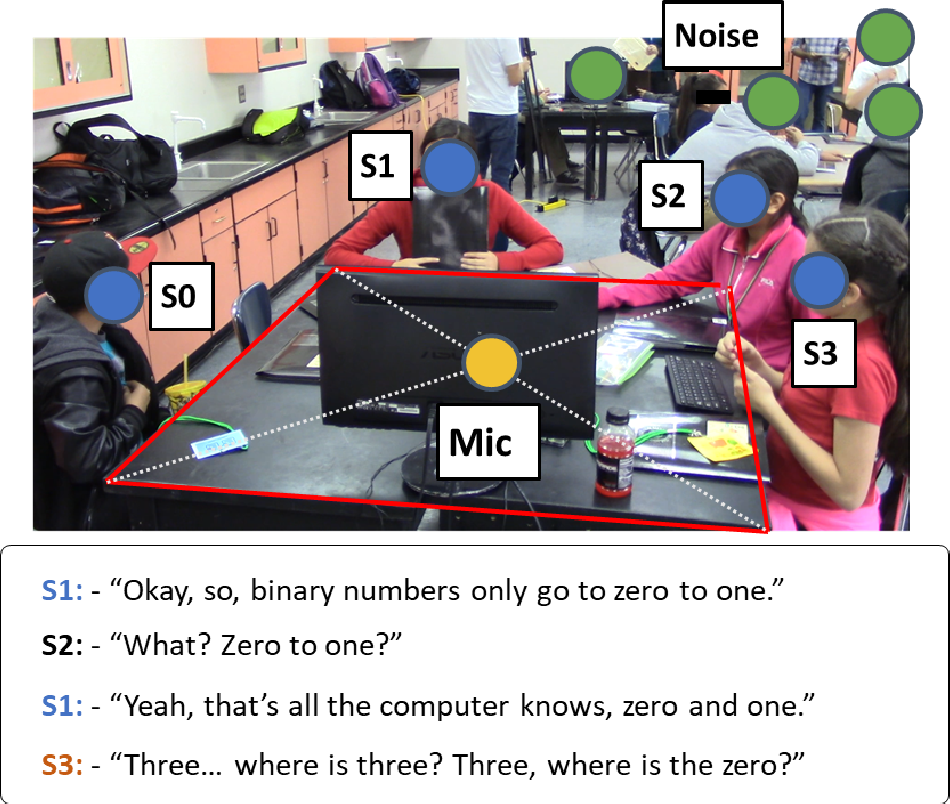 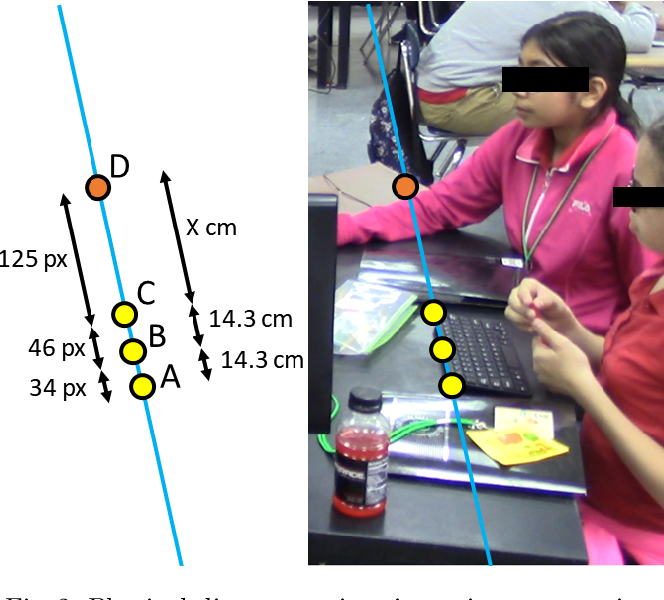 Speech recognition is very challenging in student learning environments that are characterized by significant cross-talk and background noise. To address this problem, we present a bilingual speech recognition system that uses an interactive video analysis system to estimate the 3D speaker geometry for realistic audio simulations. We demonstrate the use of our system in generating a complex audio dataset that contains significant cross-talk and background noise that approximate real-life classroom recordings. We then test our proposed system with real-life recordings. In terms of the distance of the speakers from the microphone, our interactive video analysis system obtained a better average error rate of 10.83% compared to 33.12% for a baseline approach. Our proposed system gave an accuracy of 27.92% that is 1.5% better than Google Speech-to-text on the same dataset. In terms of 9 important keywords, our approach gave an average sensitivity of 38% compared to 24% for Google Speech-to-text, while both methods maintained high average specificity of 90% and 92%. On average, sensitivity improved from 24% to 38% for our proposed approach. On the other hand, specificity remained high for both methods (90% to 92%). 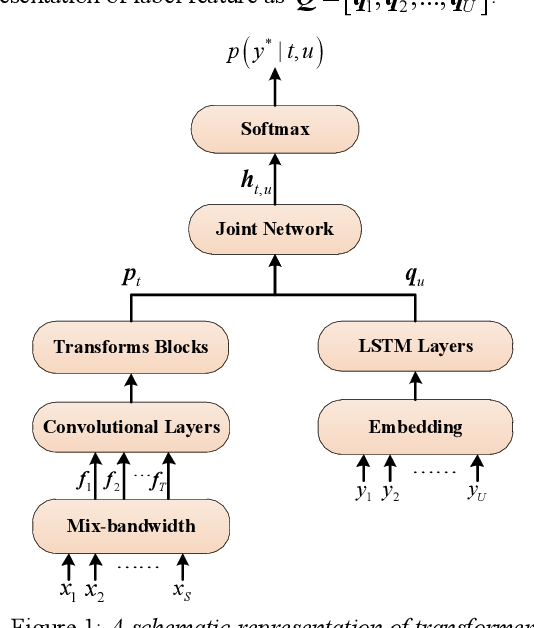 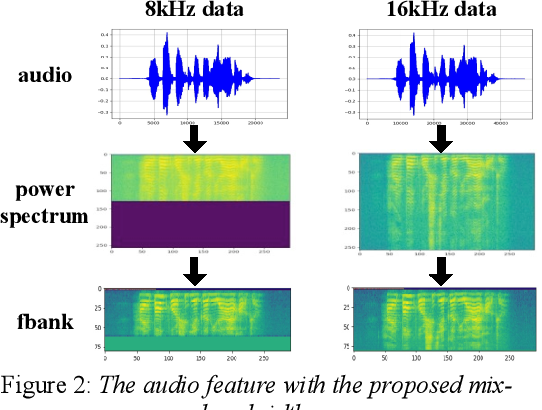 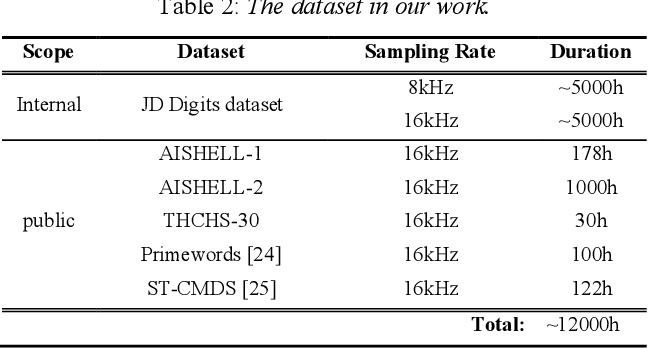 Modeling unit and model architecture are two key factors of Recurrent Neural Network Transducer (RNN-T) in end-to-end speech recognition. To improve the performance of RNN-T for Mandarin speech recognition task, a novel transformer transducer with the combination architecture of self-attention transformer and RNN is proposed. And then the choice of different modeling units for transformer transducer is explored. In addition, we present a new mix-bandwidth training method to obtain a general model that is able to accurately recognize Mandarin speech with different sampling rates simultaneously. All of our experiments are conducted on about 12,000 hours of Mandarin speech with sampling rate in 8kHz and 16kHz. Experimental results show that Mandarin transformer transducer using syllable with tone achieves the best performance. It yields an average of 14.4% and 44.1% relative Word Error Rate (WER) reduction when compared with the models using syllable initial/final with tone and Chinese character, respectively. Also, it outperforms the model based on syllable initial/final with tone with an average of 13.5% relative Character Error Rate (CER) reduction. 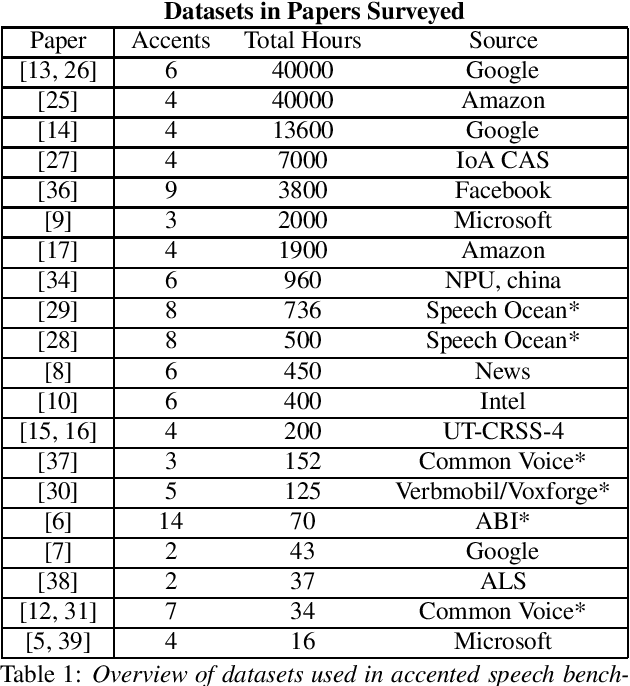 Automatic Speech Recognition (ASR) systems generalize poorly on accented speech. The phonetic and linguistic variability of accents present hard challenges for ASR systems today in both data collection and modeling strategies. The resulting bias in ASR performance across accents comes at a cost to both users and providers of ASR. We present a survey of current promising approaches to accented speech recognition and highlight the key challenges in the space. Approaches mostly focus on single model generalization and accent feature engineering. Among the challenges, lack of a standard benchmark makes research and comparison especially difficult. 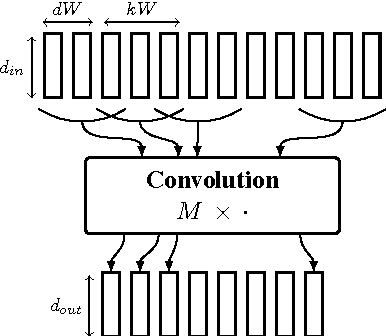 In hybrid hidden Markov model/artificial neural networks (HMM/ANN) automatic speech recognition (ASR) system, the phoneme class conditional probabilities are estimated by first extracting acoustic features from the speech signal based on prior knowledge such as, speech perception or/and speech production knowledge, and, then modeling the acoustic features with an ANN. Recent advances in machine learning techniques, more specifically in the field of image processing and text processing, have shown that such divide and conquer strategy (i.e., separating feature extraction and modeling steps) may not be necessary. Motivated from these studies, in the framework of convolutional neural networks (CNNs), this paper investigates a novel approach, where the input to the ANN is raw speech signal and the output is phoneme class conditional probability estimates. On TIMIT phoneme recognition task, we study different ANN architectures to show the benefit of CNNs and compare the proposed approach against conventional approach where, spectral-based feature MFCC is extracted and modeled by a multilayer perceptron. Our studies show that the proposed approach can yield comparable or better phoneme recognition performance when compared to the conventional approach. It indicates that CNNs can learn features relevant for phoneme classification automatically from the raw speech signal. 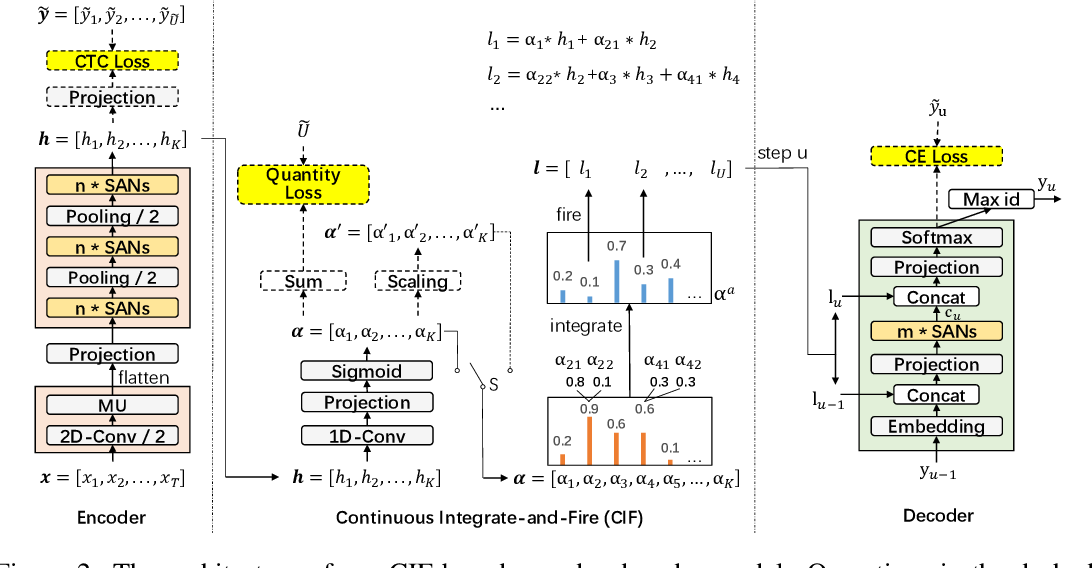 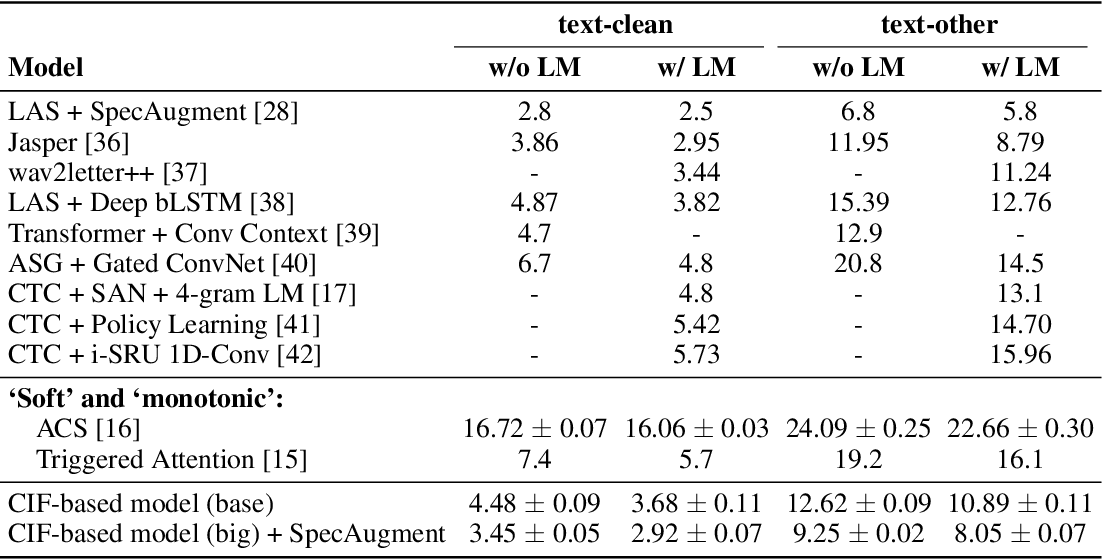 Automatic speech recognition (ASR) system is undergoing an exciting pathway to be more simplified and practical with the spring up of various end-to-end models. However, the mainstream of them neglects the positioning of token boundaries from continuous speech, which is considered crucial in human language learning and instant speech recognition. In this work, we propose Continuous Integrate-and-Fire (CIF), a 'soft' and 'monotonic' acoustic-to-linguistic alignment mechanism that addresses the boundary positioning by simulating the integrate-and-fire neuron model using continuous functions under the encoder-decoder framework. As the connection between the encoder and decoder, the CIF forwardly integrates the information in the encoded acoustic representations to determine a boundary and instantly fires the integrated information to the decoder once a boundary is located. Multiple effective strategies are introduced to the CIF-based model to alleviate the problems brought by the inaccurate positioning. Besides, multi-task learning is performed during training and an external language model is incorporated during inference to further boost the model performance. Evaluated on multiple ASR datasets that cover different languages and speech types, the CIF-based model shows stable convergence and competitive performance. Especially, it achieves a word error rate (WER) of 3.70% on the test-clean of Librispeech. 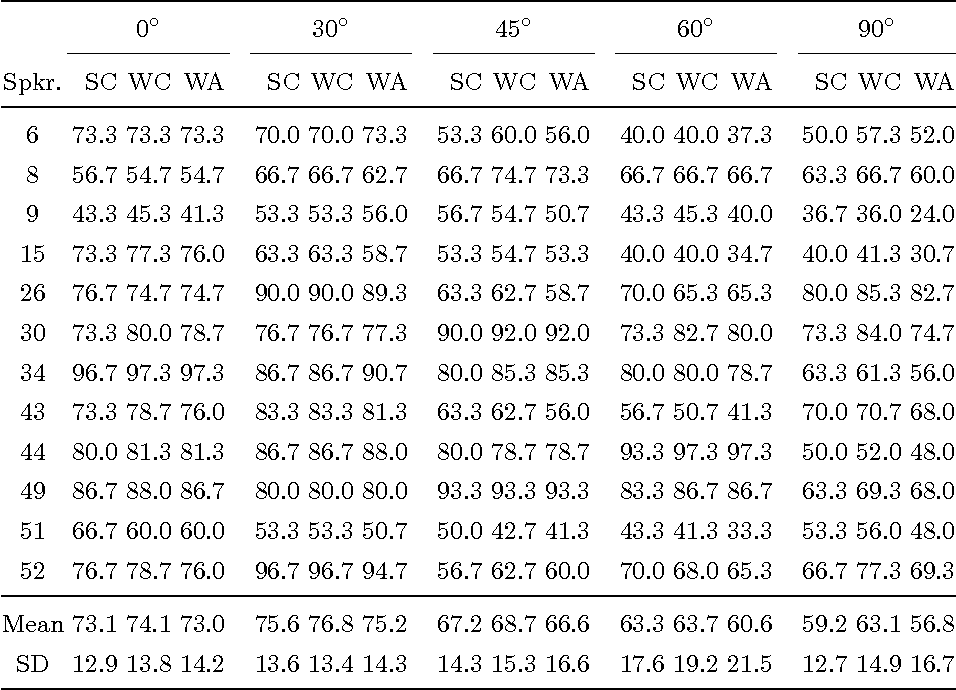 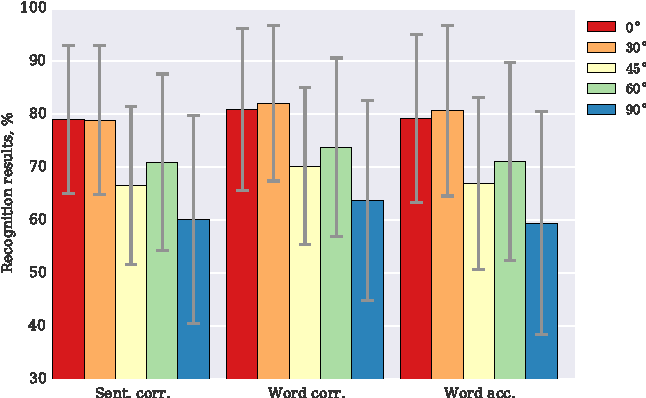 Automatic visual speech recognition is an interesting problem in pattern recognition especially when audio data is noisy or not readily available. It is also a very challenging task mainly because of the lower amount of information in the visual articulations compared to the audible utterance. In this work, principle component analysis is applied to the image patches - extracted from the video data - to learn the weights of a two-stage convolutional network. Block histograms are then extracted as the unsupervised learning features. These features are employed to learn a recurrent neural network with a set of long short-term memory cells to obtain spatiotemporal features. Finally, the obtained features are used in a tandem GMM-HMM system for speech recognition. Our results show that the proposed method has outperformed the baseline techniques applied to the OuluVS2 audiovisual database for phrase recognition with the frontal view cross-validation and testing sentence correctness reaching 79% and 73%, respectively, as compared to the baseline of 74% on cross-validation. 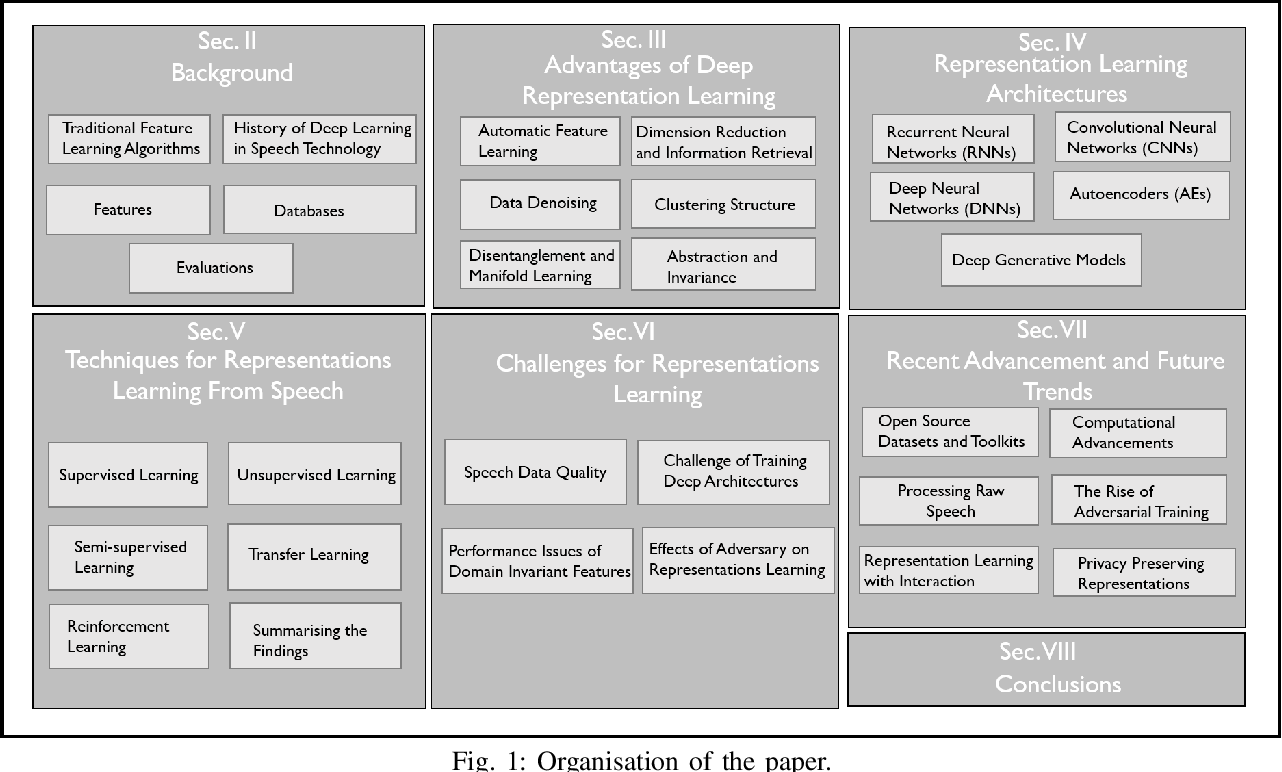 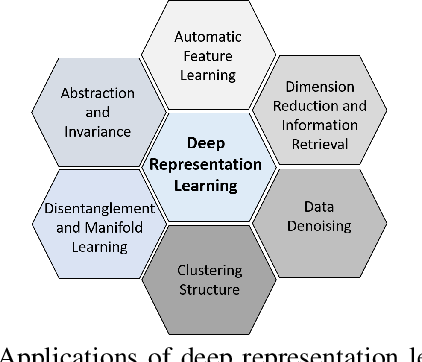 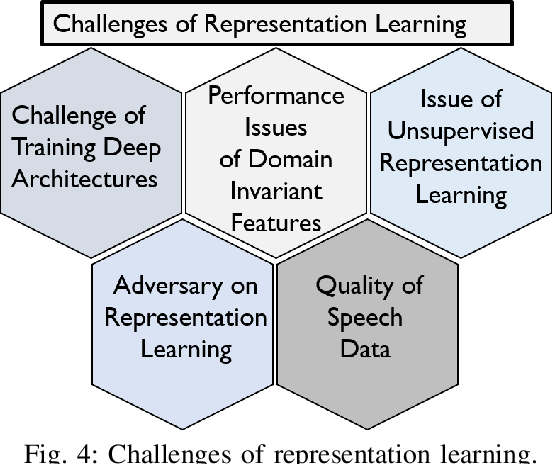 Research on speech processing has traditionally considered the task of designing hand-engineered acoustic features (feature engineering) as a separate distinct problem from the task of designing efficient machine learning (ML) models to make prediction and classification decisions. There are two main drawbacks to this approach: firstly, the feature engineering being manual is cumbersome and requires human knowledge; and secondly, the designed features might not be best for the objective at hand. This has motivated the adoption of a recent trend in speech community towards utilisation of representation learning techniques, which can learn an intermediate representation of the input signal automatically that better suits the task at hand and hence lead to improved performance. The significance of representation learning has increased with advances in deep learning (DL), where the representations are more useful and less dependent on human knowledge, making it very conducive for tasks like classification, prediction, etc. The main contribution of this paper is to present an up-to-date and comprehensive survey on different techniques of speech representation learning by bringing together the scattered research across three distinct research areas including Automatic Speech Recognition (ASR), Speaker Recognition (SR), and Speaker Emotion Recognition (SER). Recent reviews in speech have been conducted for ASR, SR, and SER, however, none of these has focused on the representation learning from speech---a gap that our survey aims to bridge.