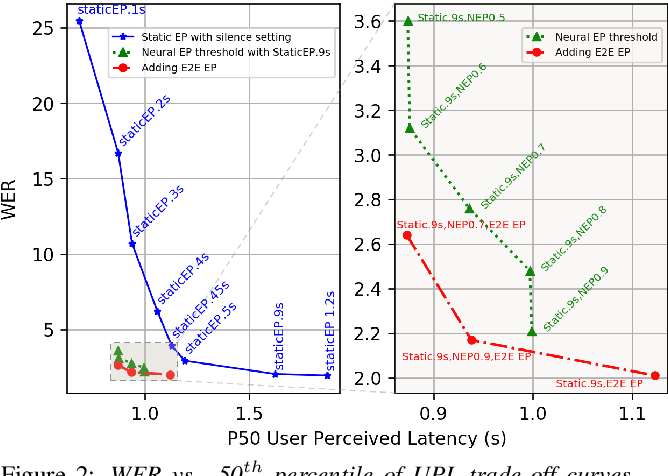 As speech-enabled devices such as smartphones and smart speakers become increasingly ubiquitous, there is growing interest in building automatic speech recognition (ASR) systems that can run directly on-device; end-to-end (E2E) speech recognition models such as recurrent neural network transducers and their variants have recently emerged as prime candidates for this task. Apart from being accurate and compact, such systems need to decode speech with low user-perceived latency (UPL), producing words as soon as they are spoken. This work examines the impact of various techniques -- model architectures, training criteria, decoding hyperparameters, and endpointer parameters -- on UPL. Our analyses suggest that measures of model size (parameters, input chunk sizes), or measures of computation (e.g., FLOPS, RTF) that reflect the model's ability to process input frames are not always strongly correlated with observed UPL. Thus, conventional algorithmic latency measurements might be inadequate in accurately capturing latency observed when models are deployed on embedded devices. Instead, we find that factors affecting token emission latency, and endpointing behavior significantly impact on UPL. We achieve the best trade-off between latency and word error rate when performing ASR jointly with endpointing, and using the recently proposed alignment regularization. 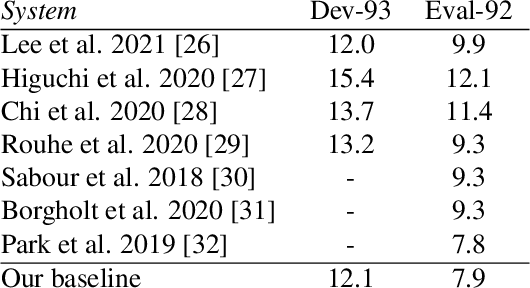 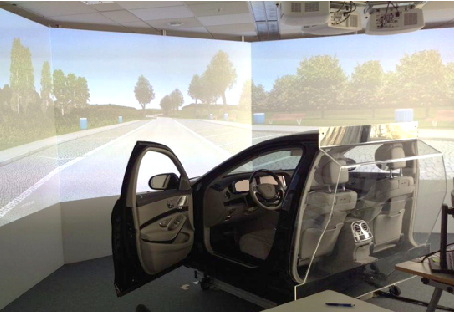 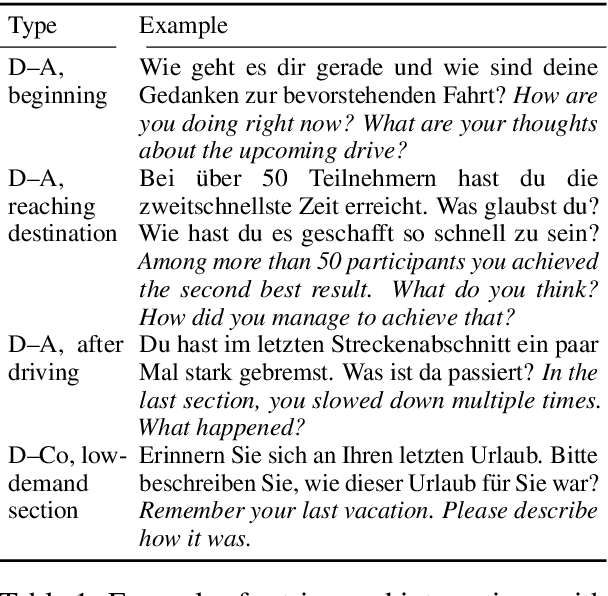 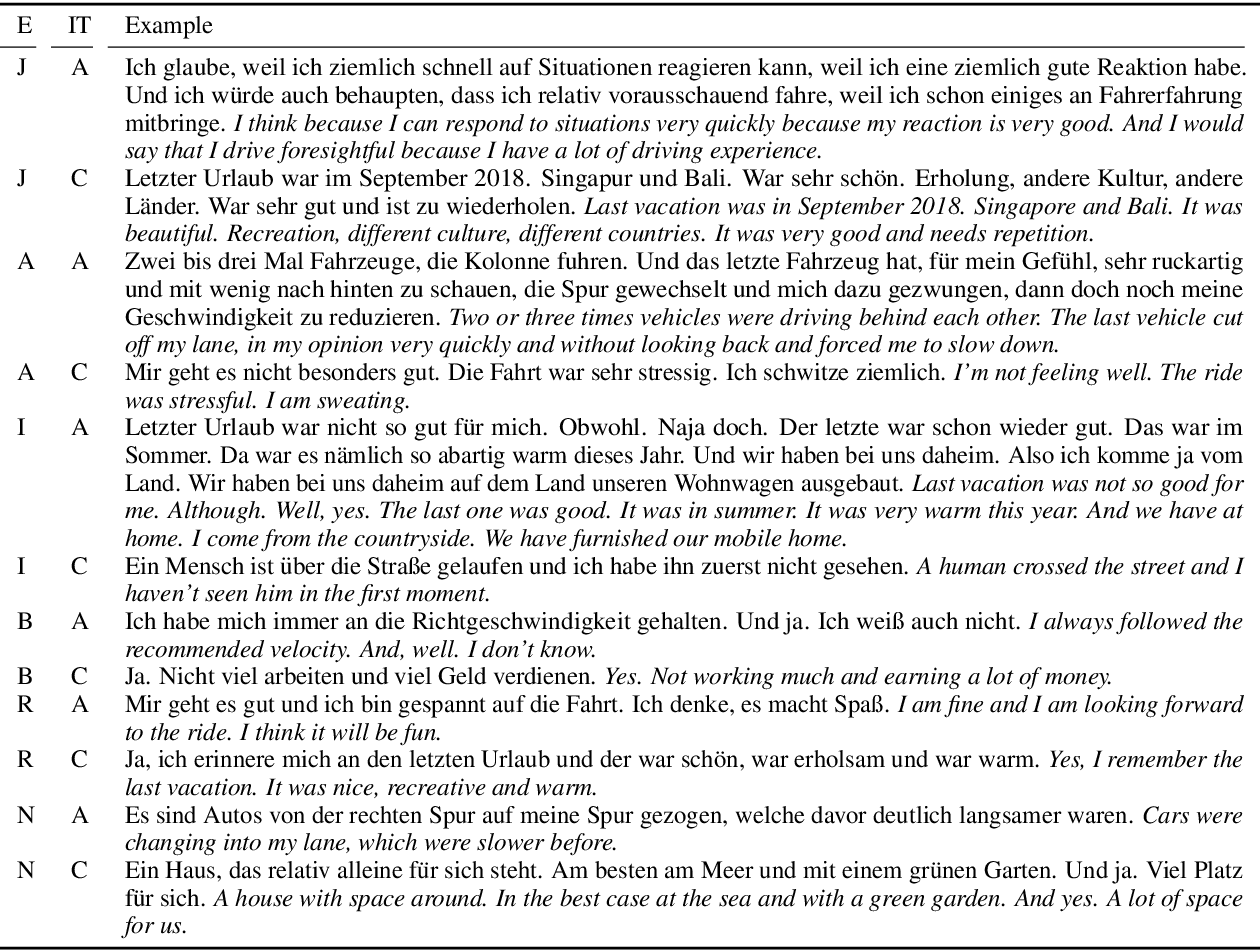 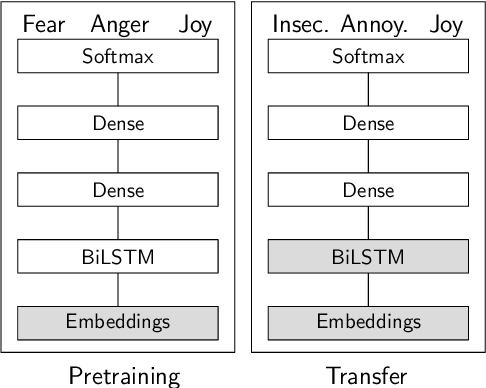 The recognition of emotions by humans is a complex process which considers multiple interacting signals such as facial expressions and both prosody and semantic content of utterances. Commonly, research on automatic recognition of emotions is, with few exceptions, limited to one modality. We describe an in-car experiment for emotion recognition from speech interactions for three modalities: the audio signal of a spoken interaction, the visual signal of the driver's face, and the manually transcribed content of utterances of the driver. We use off-the-shelf tools for emotion detection in audio and face and compare that to a neural transfer learning approach for emotion recognition from text which utilizes existing resources from other domains. We see that transfer learning enables models based on out-of-domain corpora to perform well. This method contributes up to 10 percentage points in F1, with up to 76 micro-average F1 across the emotions joy, annoyance and insecurity. Our findings also indicate that off-the-shelf-tools analyzing face and audio are not ready yet for emotion detection in in-car speech interactions without further adjustments. 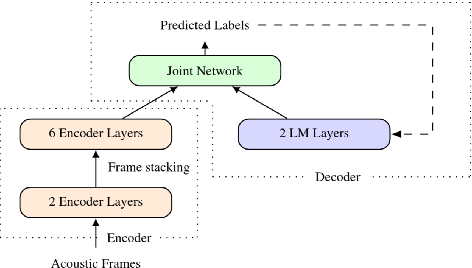 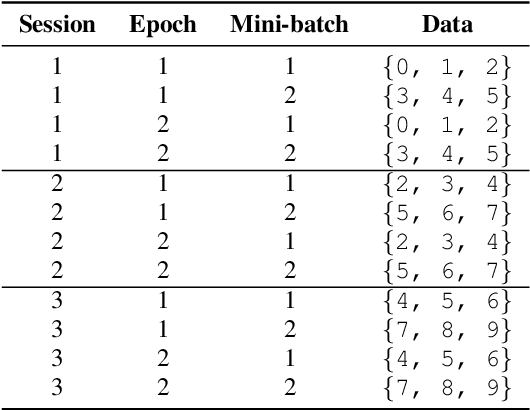 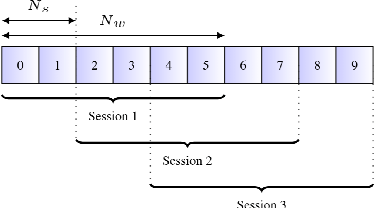 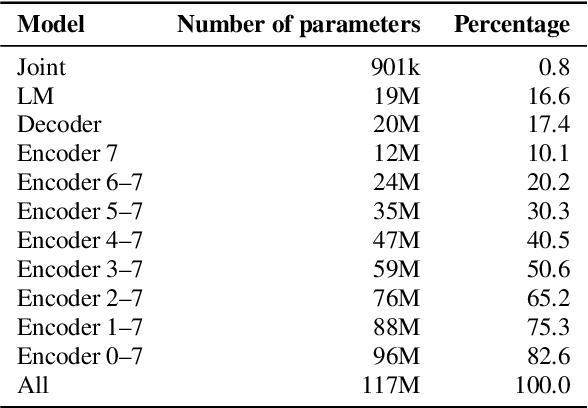 Speaker-independent speech recognition systems trained with data from many users are generally robust against speaker variability and work well for a large population of speakers. However, these systems do not always generalize well for users with very different speech characteristics. This issue can be addressed by building personalized systems that are designed to work well for each specific user. In this paper, we investigate the idea of securely training personalized end-to-end speech recognition models on mobile devices so that user data and models never leave the device and are never stored on a server. We study how the mobile training environment impacts performance by simulating on-device data consumption. We conduct experiments using data collected from speech impaired users for personalization. Our results show that personalization achieved 63.7\% relative word error rate reduction when trained in a server environment and 58.1% in a mobile environment. Moving to on-device personalization resulted in 18.7% performance degradation, in exchange for improved scalability and data privacy. To train the model on device, we split the gradient computation into two and achieved 45% memory reduction at the expense of 42% increase in training time. 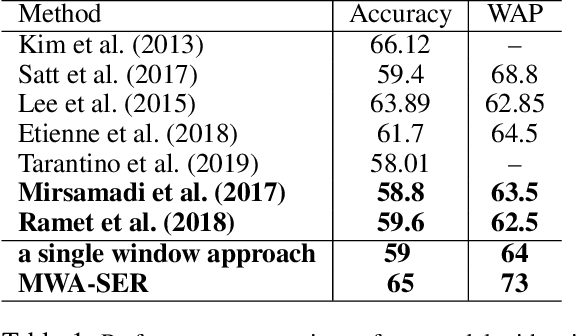 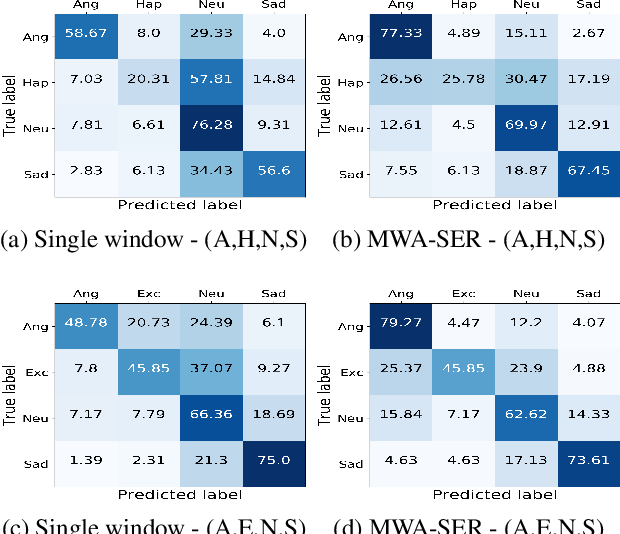 We present a novel, Multi-window Data Augmentation (MWA-SER), approach for speech emotion recognition. MWA-SER is a unimodal approach that focuses on two key concepts; designing the speech augmentation method to generate additional data samples and building the deep learning models to recognize the underlying emotion of an audio signal. We propose a novel multi-window augmentation method to extract more audio features from the speech signal by employing multiple window sizes into the audio feature extraction process. We show that our proposed augmentation method with minimally extracted features combined with a deep learning model improves the performance of speech emotion recognition. We demonstrate the performance of our MWA-SER approach on the IEMOCAP corpus and show that our approach outperforms previous methods, exhibiting 65% accuracy and 73% weighted average precision, a 6% and a 9% absolute improvements on accuracy and weighted average precision, respectively. We also demonstrate that with the minimum number of features (34), our model outperforms other models that use more than 900 features with higher modeling complexity. Furthermore, we also evaluate our model by replacing the "happy" category of emotion with "excited". To the best of our knowledge, our approach achieves state-of-the-art results with 66% accuracy and 68% weighted average precision, which is an 11% and a 14% absolute improvement on accuracy and weighted average precision, respectively. 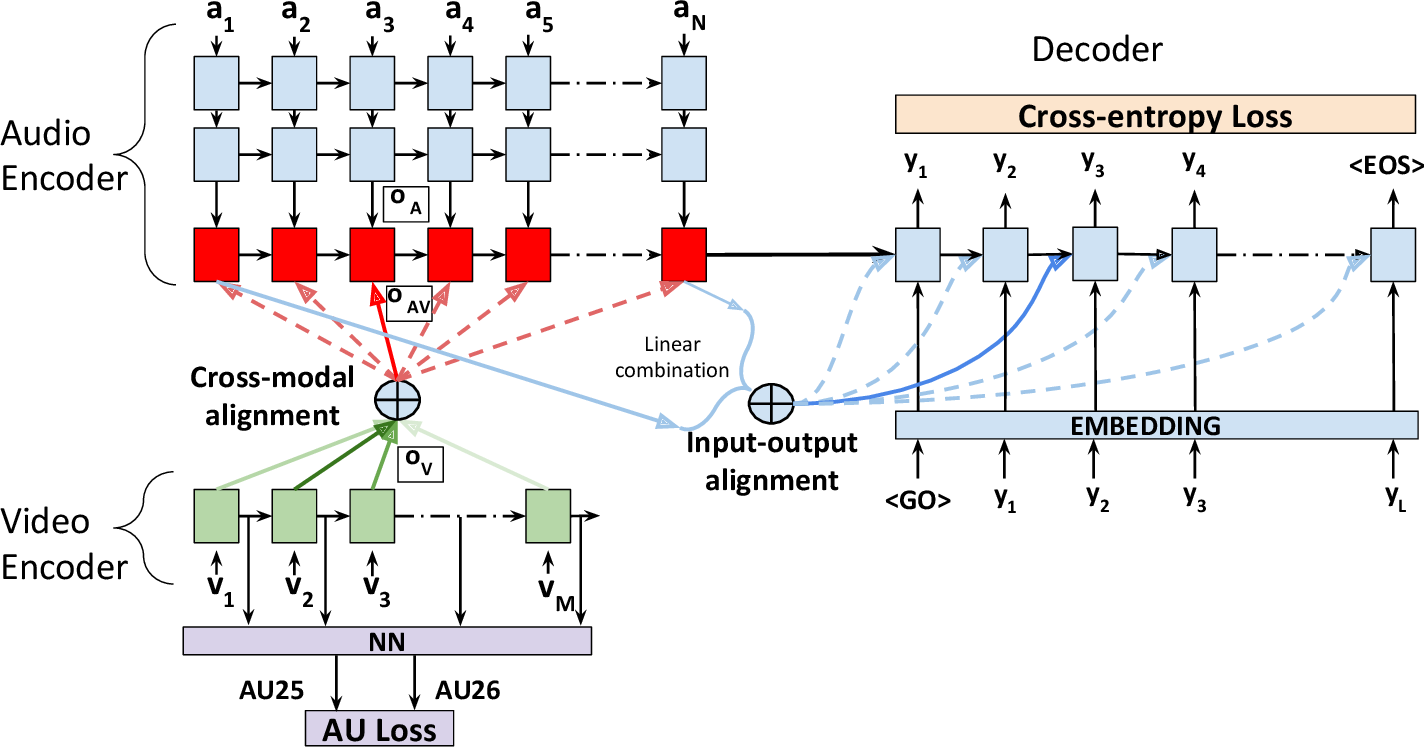 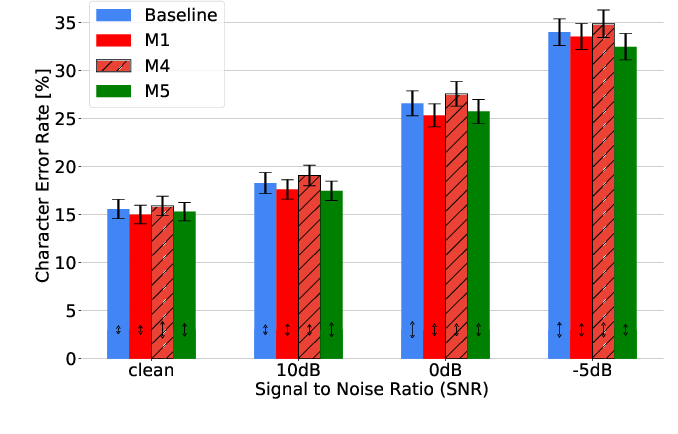 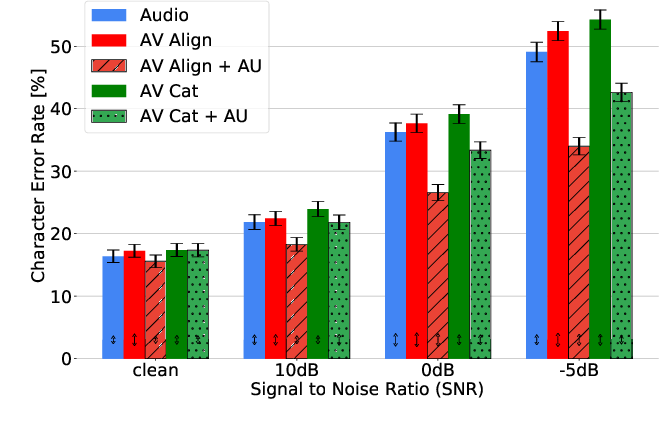 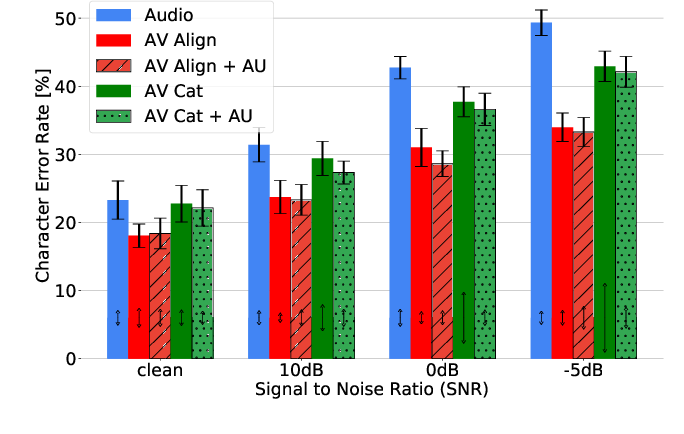 Audio-Visual Speech Recognition (AVSR) seeks to model, and thereby exploit, the dynamic relationship between a human voice and the corresponding mouth movements. A recently proposed multimodal fusion strategy, AV Align, based on state-of-the-art sequence to sequence neural networks, attempts to model this relationship by explicitly aligning the acoustic and visual representations of speech. This study investigates the inner workings of AV Align and visualises the audio-visual alignment patterns. Our experiments are performed on two of the largest publicly available AVSR datasets, TCD-TIMIT and LRS2. We find that AV Align learns to align acoustic and visual representations of speech at the frame level on TCD-TIMIT in a generally monotonic pattern. We also determine the cause of initially seeing no improvement over audio-only speech recognition on the more challenging LRS2. We propose a regularisation method which involves predicting lip-related Action Units from visual representations. Our regularisation method leads to better exploitation of the visual modality, with performance improvements between 7% and 30% depending on the noise level. Furthermore, we show that the alternative Watch, Listen, Attend, and Spell network is affected by the same problem as AV Align, and that our proposed approach can effectively help it learn visual representations. Our findings validate the suitability of the regularisation method to AVSR and encourage researchers to rethink the multimodal convergence problem when having one dominant modality.


* in IEEE/ACM Transactions on Audio, Speech, and Language Processing (to appear) 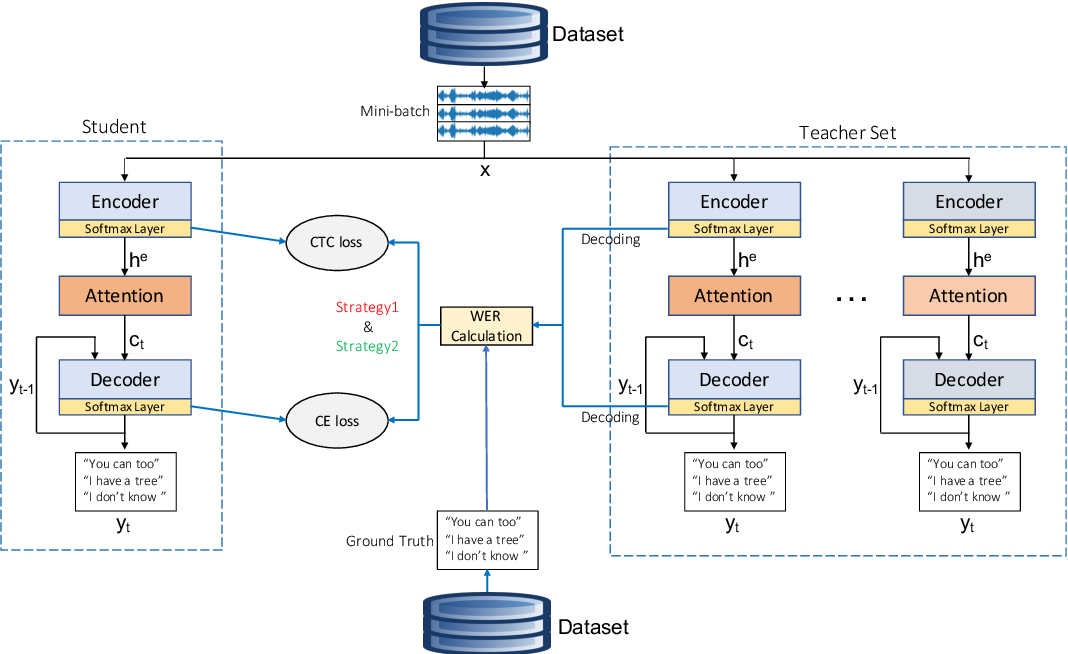 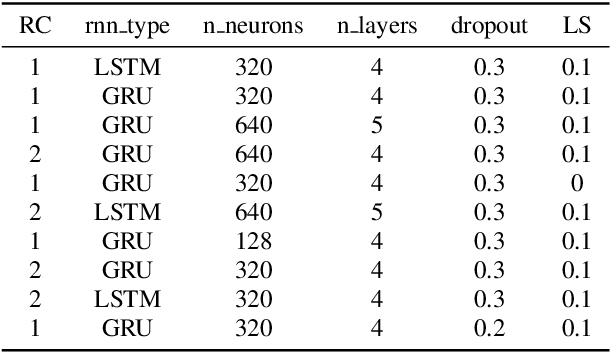 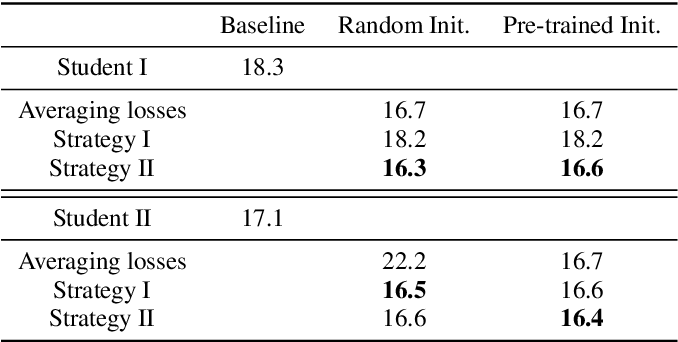 Knowledge distillation has been widely used to compress existing deep learning models while preserving the performance on a wide range of applications. In the specific context of Automatic Speech Recognition (ASR), distillation from ensembles of acoustic models has recently shown promising results in increasing recognition performance. In this paper, we propose an extension of multi-teacher distillation methods to joint ctc-atention end-to-end ASR systems. We also introduce two novel distillation strategies. The core intuition behind both is to integrate the error rate metric to the teacher selection rather than solely focusing on the observed losses. This way, we directly distillate and optimize the student toward the relevant metric for speech recognition. We evaluated these strategies under a selection of training procedures on the TIMIT phoneme recognition task and observed promising error rate for these strategies compared to a common baseline. Indeed, the best obtained phoneme error rate of 16.4% represents a state-of-the-art score for end-to-end ASR systems. 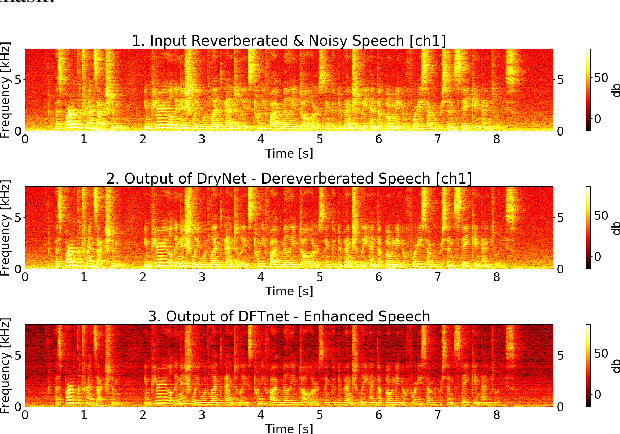 Sequence-to-sequence (S2S) modeling is becoming a popular paradigm for automatic speech recognition (ASR) because of its ability to jointly optimize all the conventional ASR components in an end-to-end (E2E) fashion. This report investigates the ability of E2E ASR from standard close-talk to far-field applications by encompassing entire multichannel speech enhancement and ASR components within the S2S model. There have been previous studies on jointly optimizing neural beamforming alongside E2E ASR for denoising. It is clear from both recent challenge outcomes and successful products that far-field systems would be incomplete without solving both denoising and dereverberation simultaneously. This report uses a recently developed architecture for far-field ASR by composing neural extensions of dereverberation and beamforming modules with the S2S ASR module as a single differentiable neural network and also clearly defining the role of each subnetwork. The original implementation of this architecture was successfully applied to the noisy speech recognition task (CHiME-4), while we applied this implementation to noisy reverberant tasks (DIRHA and REVERB). Our investigation shows that the method achieves better performance than conventional pipeline methods on the DIRHA English dataset and comparable performance on the REVERB dataset. It also has additional advantages of being neither iterative nor requiring parallel noisy and clean speech data. 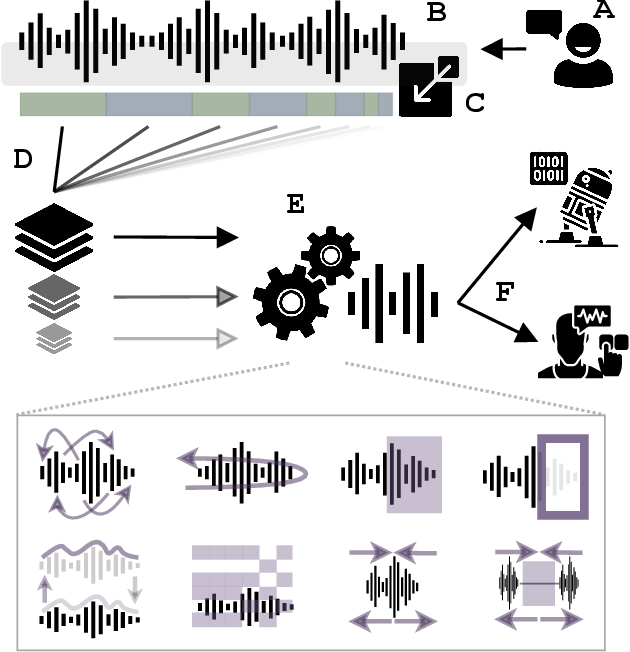 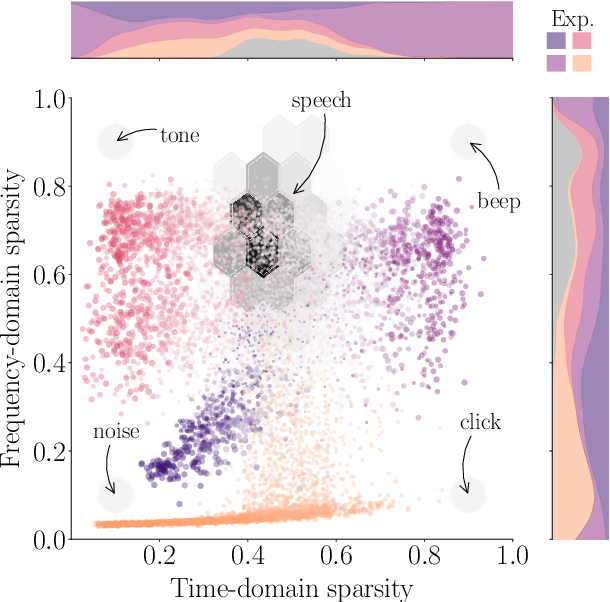 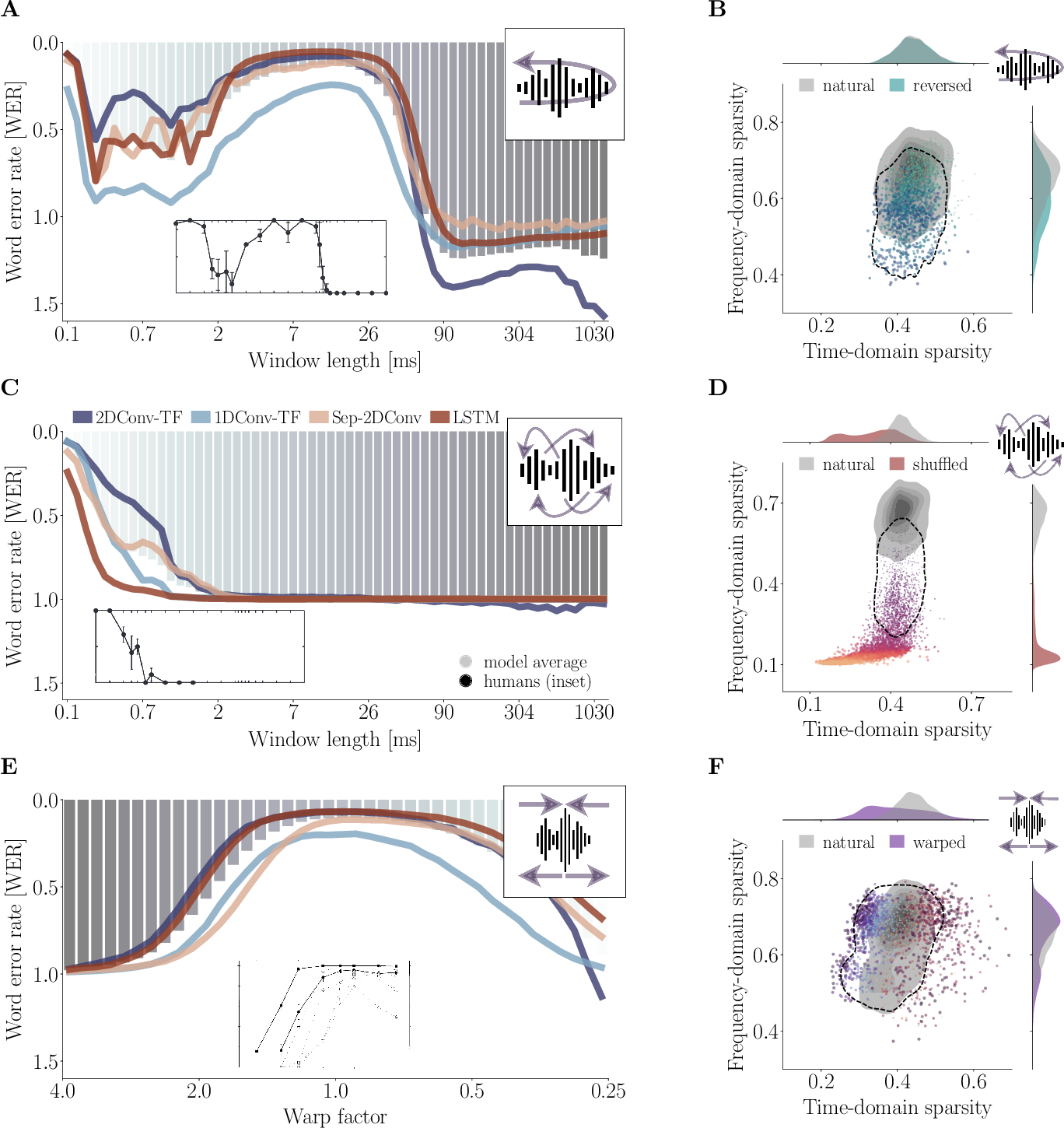 Natural and artificial audition can in principle evolve different solutions to a given problem. The constraints of the task, however, can nudge the cognitive science and engineering of audition to qualitatively converge, suggesting that a closer mutual examination would improve artificial hearing systems and process models of the mind and brain. Speech recognition - an area ripe for such exploration - is inherently robust in humans to a number transformations at various spectrotemporal granularities. To what extent are these robustness profiles accounted for by high-performing neural network systems? We bring together experiments in speech recognition under a single synthesis framework to evaluate state-of-the-art neural networks as stimulus-computable, optimized observers. In a series of experiments, we (1) clarify how influential speech manipulations in the literature relate to each other and to natural speech, (2) show the granularities at which machines exhibit out-of-distribution robustness, reproducing classical perceptual phenomena in humans, (3) identify the specific conditions where model predictions of human performance differ, and (4) demonstrate a crucial failure of all artificial systems to perceptually recover where humans do, suggesting a key specification for theory and model building. These findings encourage a tighter synergy between the cognitive science and engineering of audition. 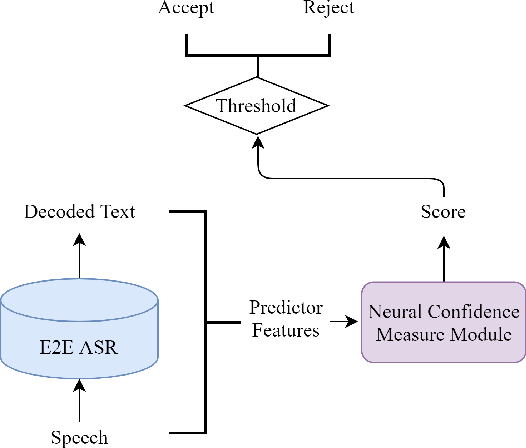 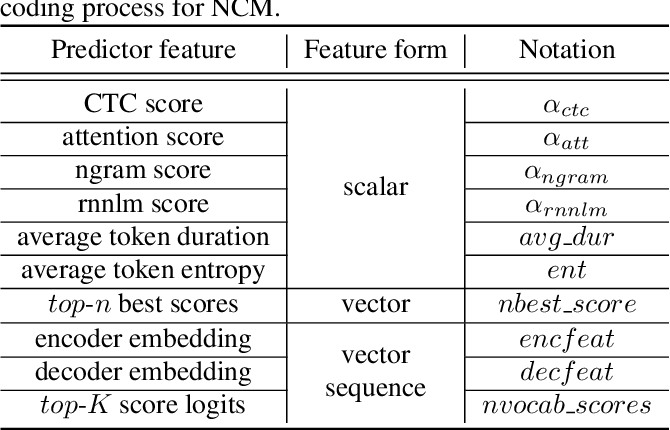 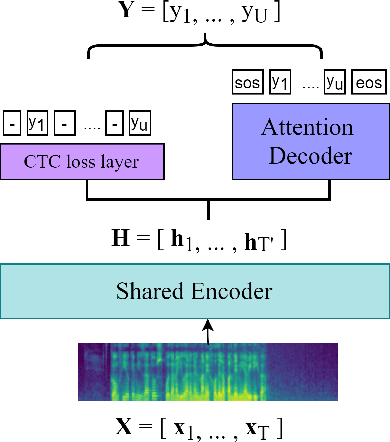 Confidence measure is a performance index of particular importance for automatic speech recognition (ASR) systems deployed in real-world scenarios. In the present study, utterance-level neural confidence measure (NCM) in end-to-end automatic speech recognition (E2E ASR) is investigated. The E2E system adopts the joint CTC-attention Transformer architecture. The prediction of NCM is formulated as a task of binary classification, i.e., accept/reject the input utterance, based on a set of predictor features acquired during the ASR decoding process. The investigation is focused on evaluating and comparing the efficacies of predictor features that are derived from different internal and external modules of the E2E system. Experiments are carried out on children speech, for which state-of-the-art ASR systems show less than satisfactory performance and robust confidence measure is particularly useful. It is noted that predictor features related to acoustic information of speech play a more important role in estimating confidence measure than those related to linguistic information. N-best score features show significantly better performance than single-best ones. It has also been shown that the metrics of EER and AUC are not appropriate to evaluate the NCM of a mismatched ASR with significant performance gap.