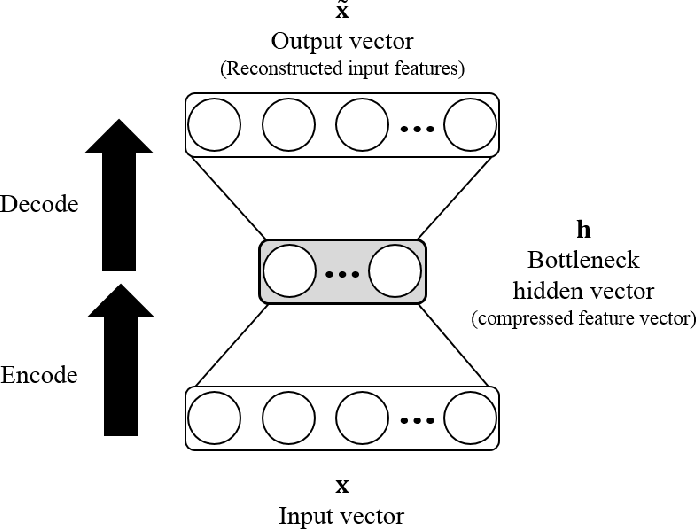 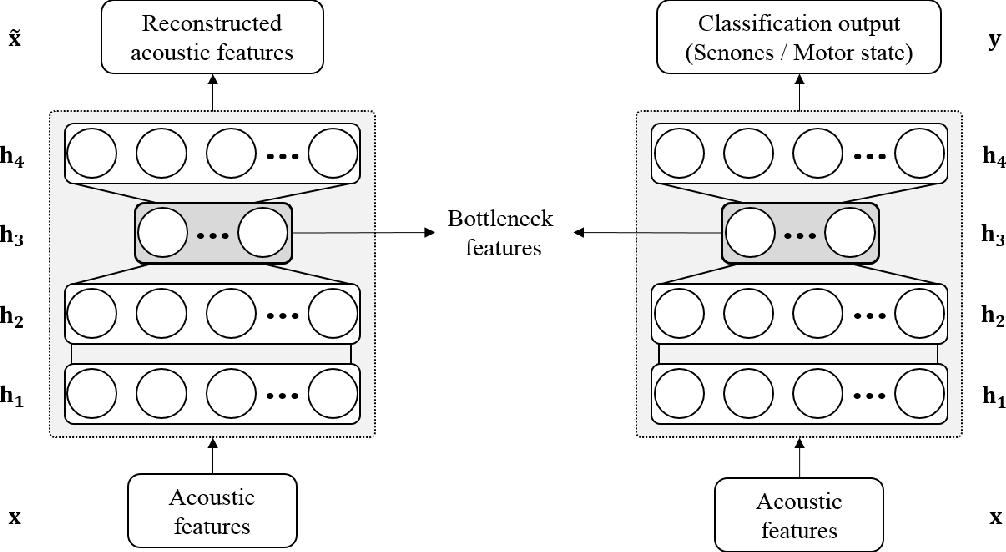 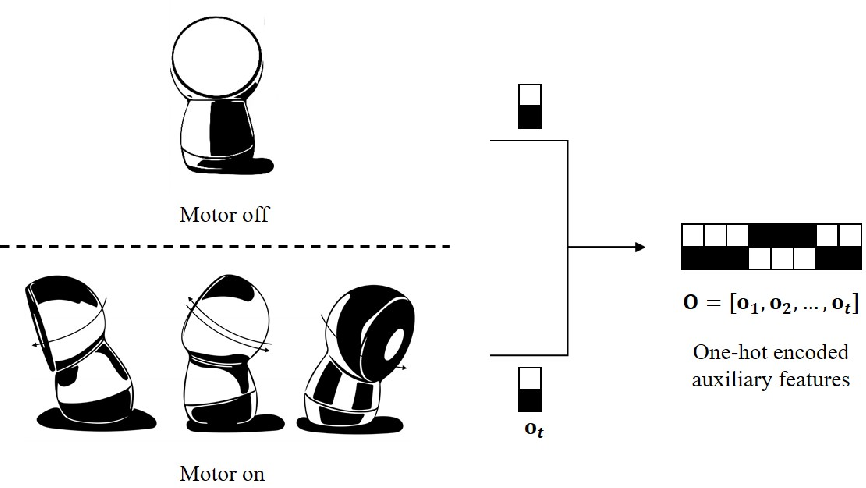 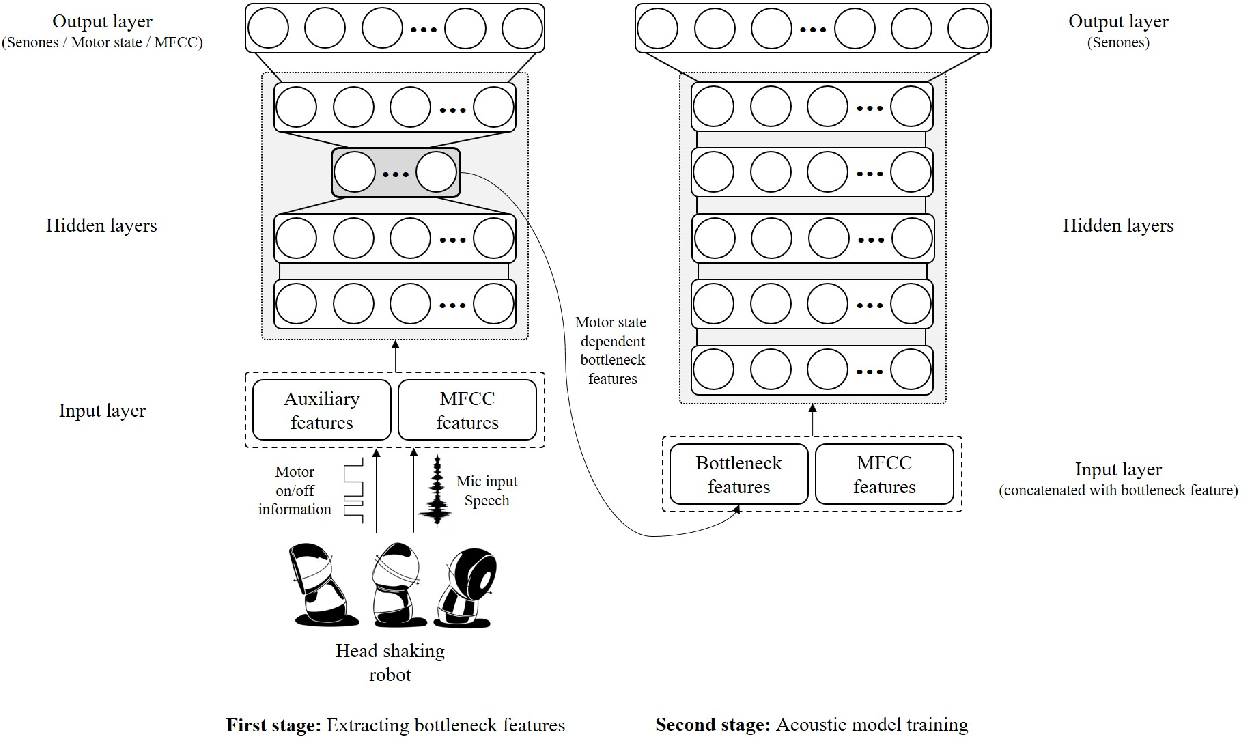 As for the humanoid robots, the internal noise, which is generated by motors, fans and mechanical components when the robot is moving or shaking its body, severely degrades the performance of the speech recognition accuracy. In this paper, a novel speech recognition system robust to ego-noise for humanoid robots is proposed, in which on/off state of the motor is employed as auxiliary information for finding the relevant input features. For this, we consider the bottleneck features, which have been successfully applied to deep neural network (DNN) based automatic speech recognition (ASR) system. When learning the bottleneck features to catch, we first exploit the motor on/off state data as supplementary information in addition to the acoustic features as the input of the first deep neural network (DNN) for preliminary acoustic modeling. Then, the second DNN for primary acoustic modeling employs both the bottleneck features tossed from the first DNN and the acoustics features. When the proposed method is evaluated in terms of phoneme error rate (PER) on TIMIT database, the experimental results show that achieve obvious improvement (11% relative) is achieved by our algorithm over the conventional systems.

Disordered speech recognition is a highly challenging task. The underlying neuro-motor conditions of people with speech disorders, often compounded with co-occurring physical disabilities, lead to the difficulty in collecting large quantities of speech required for system development. This paper investigates a set of data augmentation techniques for disordered speech recognition, including vocal tract length perturbation (VTLP), tempo perturbation and speed perturbation. Both normal and disordered speech were exploited in the augmentation process. Variability among impaired speakers in both the original and augmented data was modeled using learning hidden unit contributions (LHUC) based speaker adaptive training. The final speaker adapted system constructed using the UASpeech corpus and the best augmentation approach based on speed perturbation produced up to 2.92% absolute (9.3% relative) word error rate (WER) reduction over the baseline system without data augmentation, and gave an overall WER of 26.37% on the test set containing 16 dysarthric speakers. 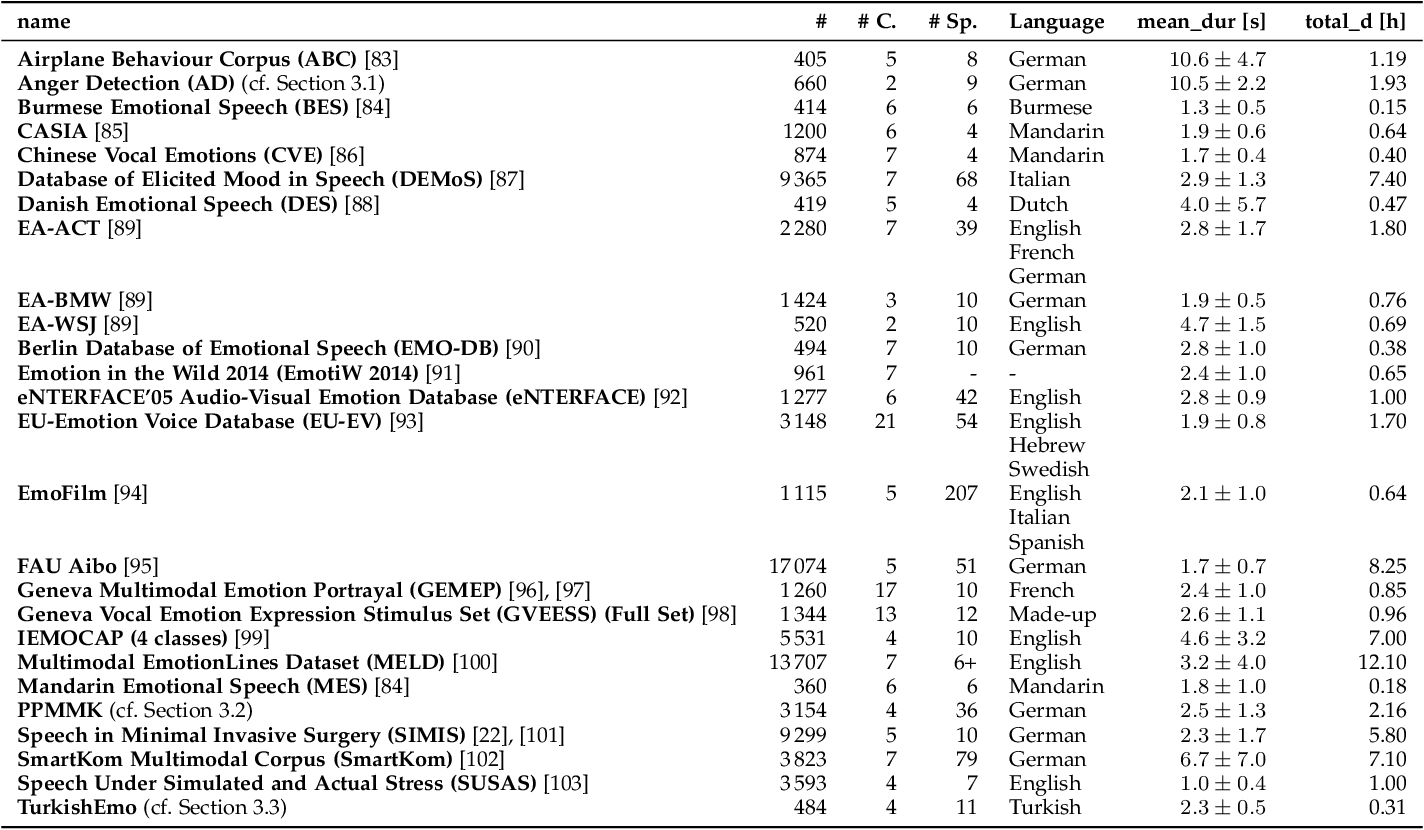 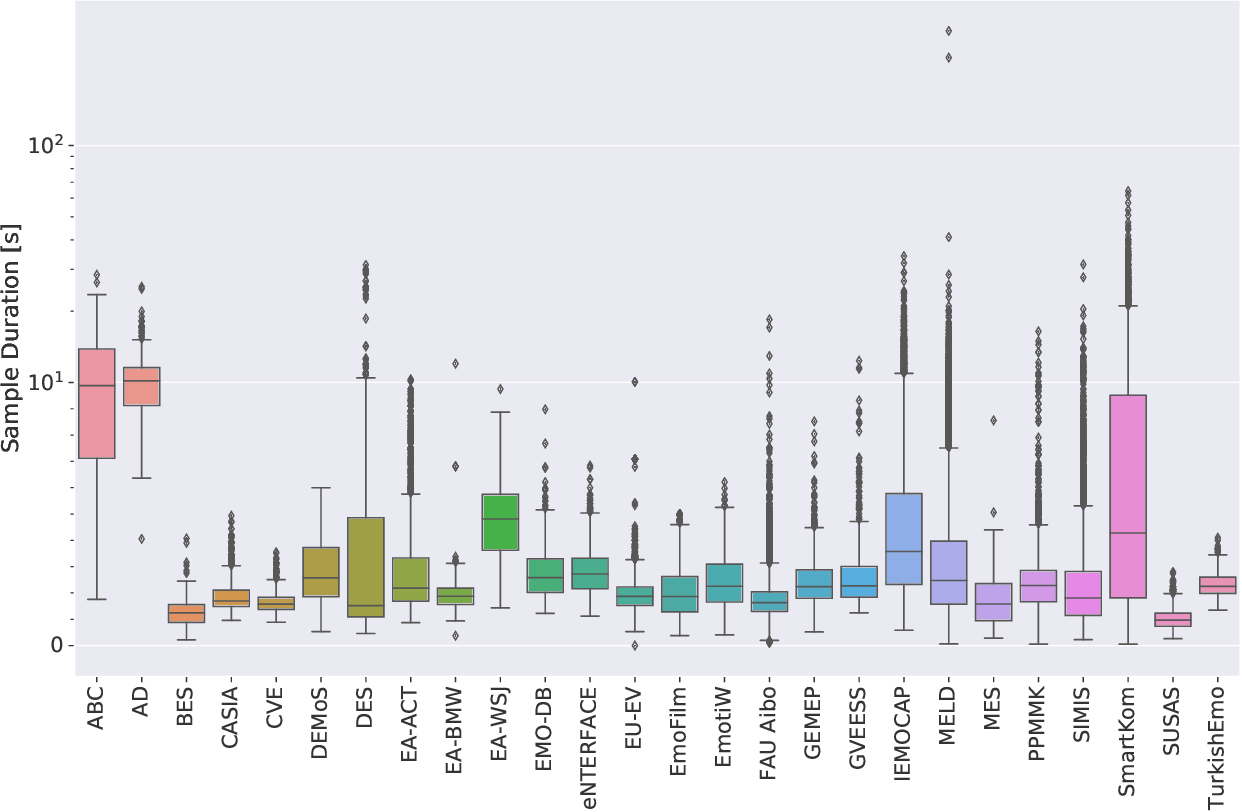 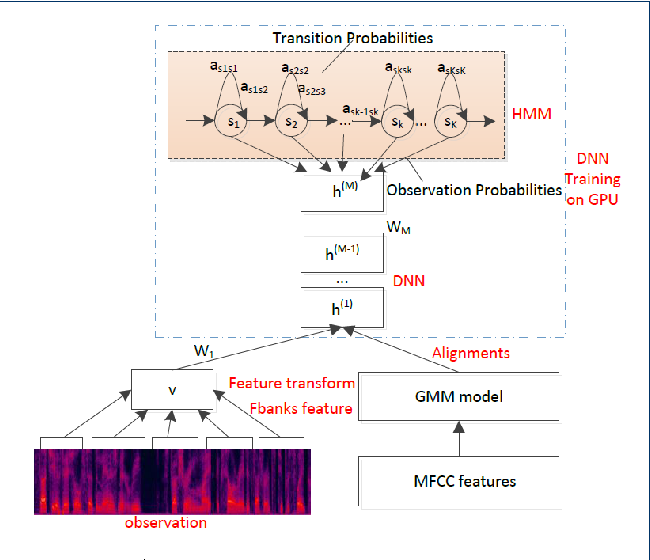 Speech data is crucially important for speech recognition research. There are quite some speech databases that can be purchased at prices that are reasonable for most research institutes. However, for young people who just start research activities or those who just gain initial interest in this direction, the cost for data is still an annoying barrier. We support the `free data' movement in speech recognition: research institutes (particularly supported by public funds) publish their data freely so that new researchers can obtain sufficient data to kick of their career. In this paper, we follow this trend and release a free Chinese speech database THCHS-30 that can be used to build a full- edged Chinese speech recognition system. We report the baseline system established with this database, including the performance under highly noisy conditions. 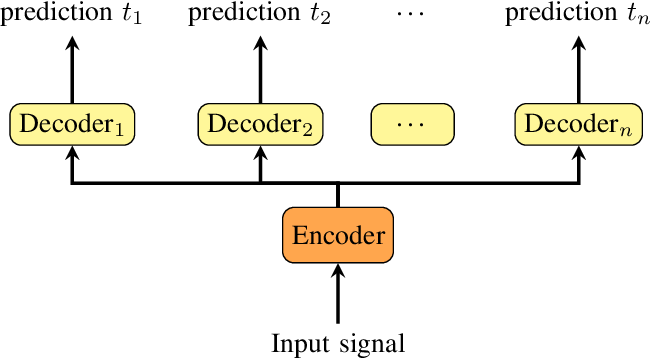 Most state-of-the-art speech systems are using Deep Neural Networks (DNNs). Those systems require a large amount of data to be learned. Hence, learning state-of-the-art frameworks on under-resourced speech languages/problems is a difficult task. Problems could be the limited amount of data for impaired speech. Furthermore, acquiring more data and/or expertise is time-consuming and expensive. In this paper we position ourselves for the following speech processing tasks: Automatic Speech Recognition, speaker identification and emotion recognition. To assess the problem of limited data, we firstly investigate state-of-the-art Automatic Speech Recognition systems as it represents the hardest tasks (due to the large variability in each language). Next, we provide an overview of techniques and tasks requiring fewer data. In the last section we investigate few-shot techniques as we interpret under-resourced speech as a few-shot problem. In that sense we propose an overview of few-shot techniques and perspectives of using such techniques for the focused speech problems in this survey. It occurs that the reviewed techniques are not well adapted for large datasets. Nevertheless, some promising results from the literature encourage the usage of such techniques for speech processing. 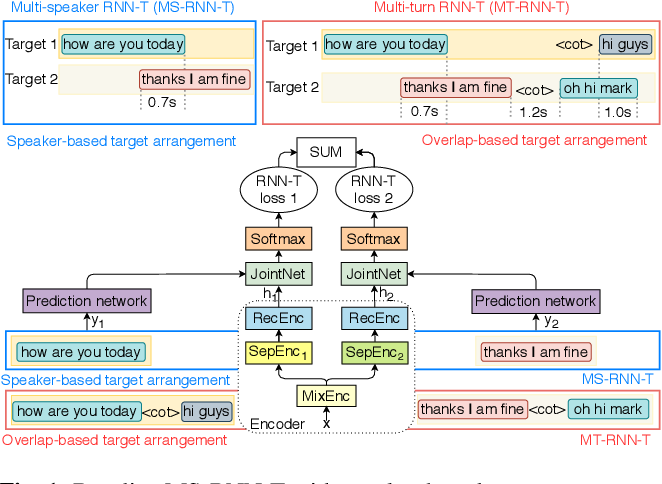 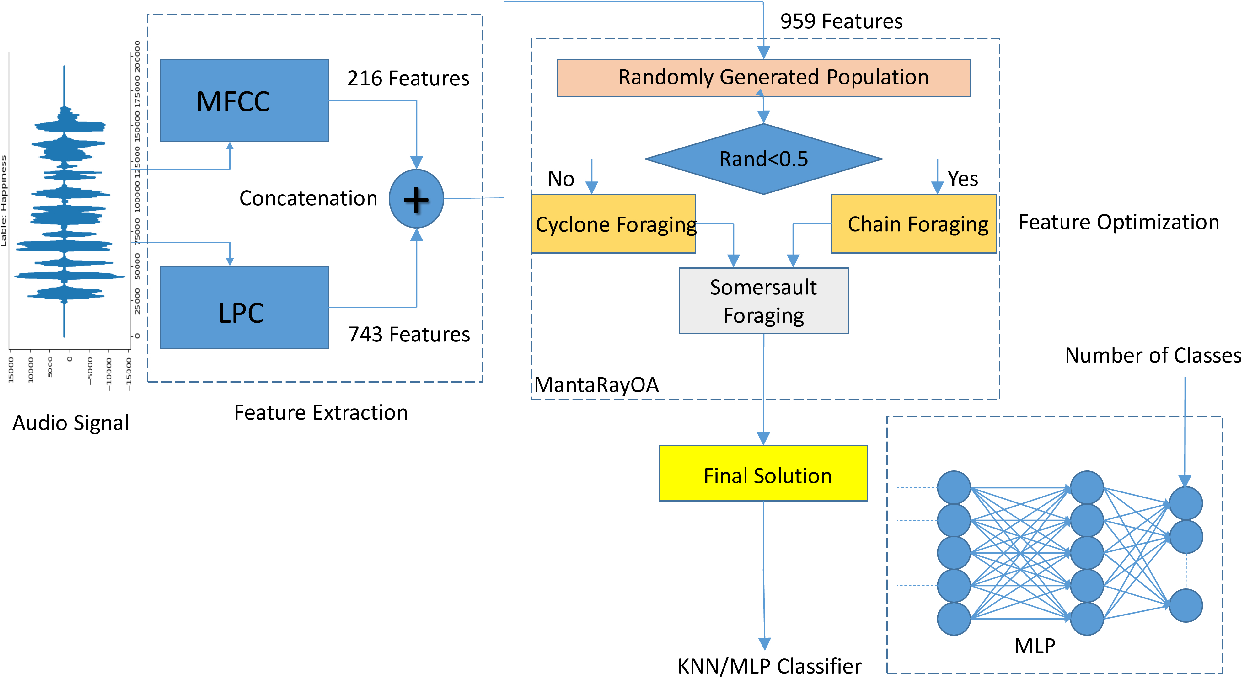 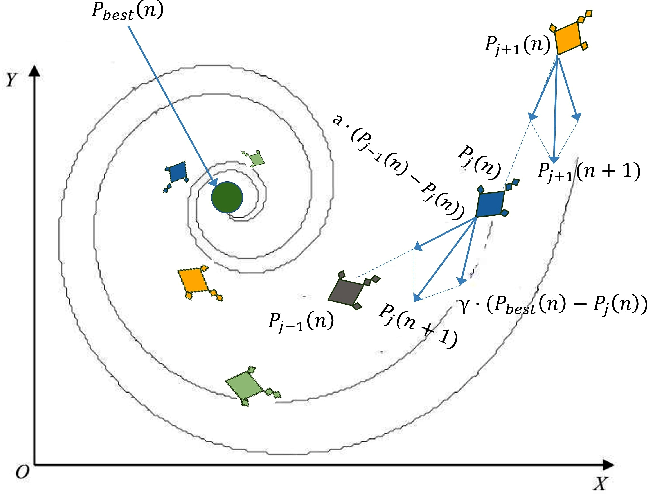 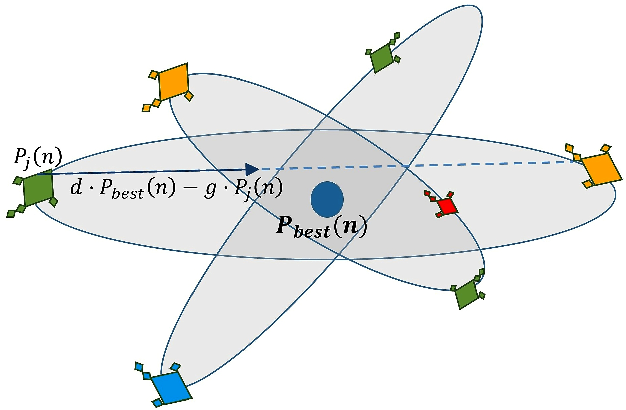 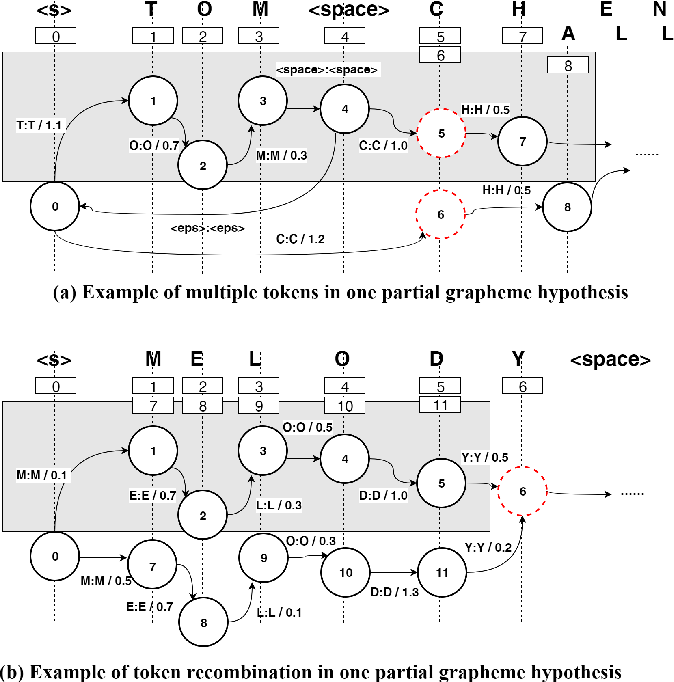 End-to-end modeling (E2E) of automatic speech recognition (ASR) blends all the components of a traditional speech recognition system into a unified model. Although it simplifies training and decoding pipelines, the unified model is hard to adapt when mismatch exists between training and test data. In this work, we focus on contextual speech recognition, which is particularly challenging for E2E models because it introduces significant mismatch between training and test data. To improve the performance in the presence of complex contextual information, we propose to use class-based language models(CLM) that can populate the classes with contextdependent information in real-time. To enable this approach to scale to a large number of class members and minimize search errors, we propose a token passing decoder with efficient token recombination for E2E systems for the first time. We evaluate the proposed system on general and contextual ASR, and achieve relative 62% Word Error Rate(WER) reduction for contextual ASR without hurting performance for general ASR. We show that the proposed method performs well without modification of the decoding hyper-parameters across tasks, making it a general solution for E2E ASR. 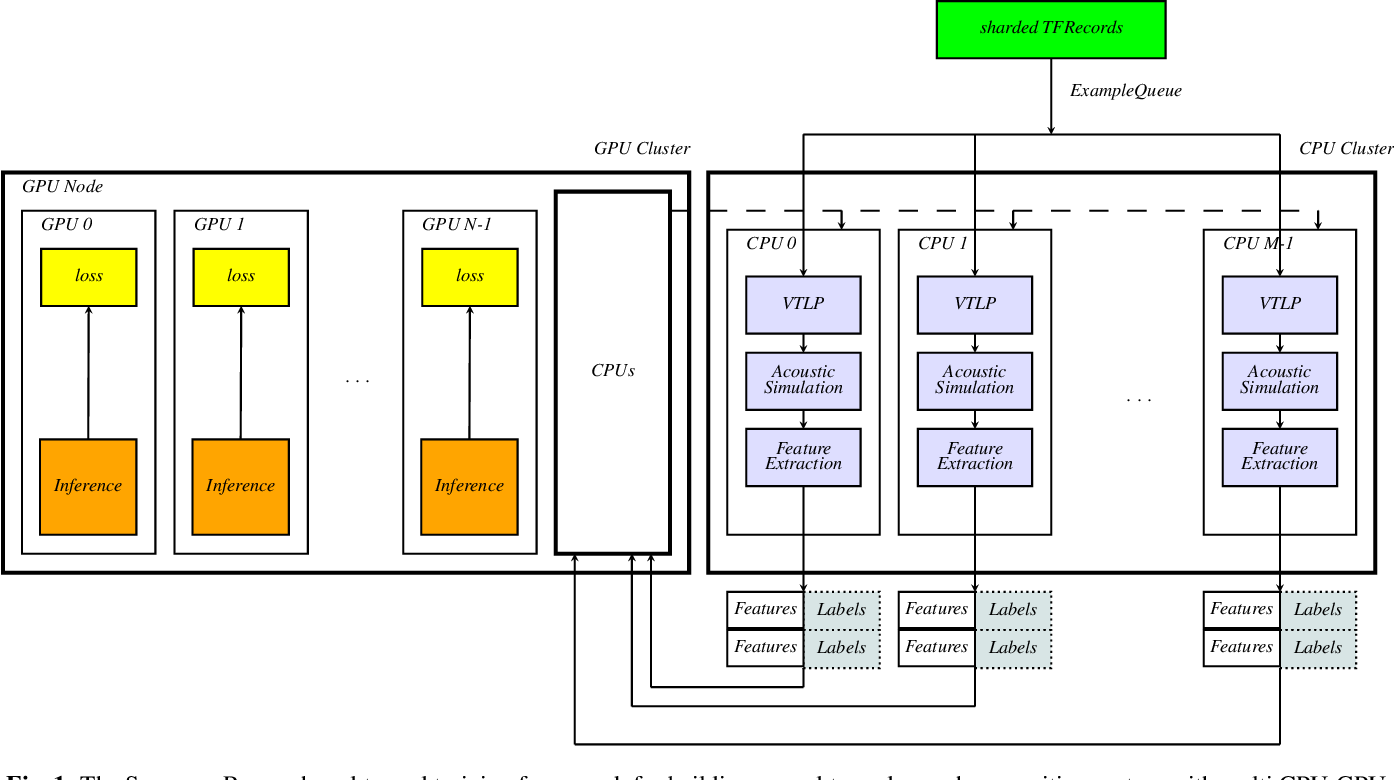 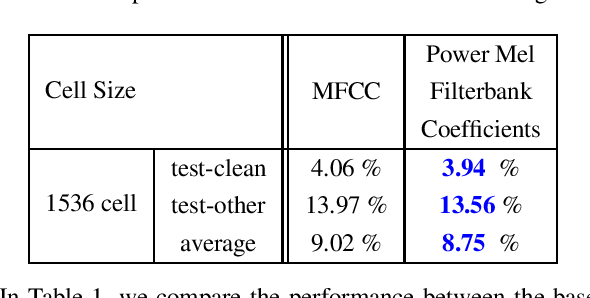 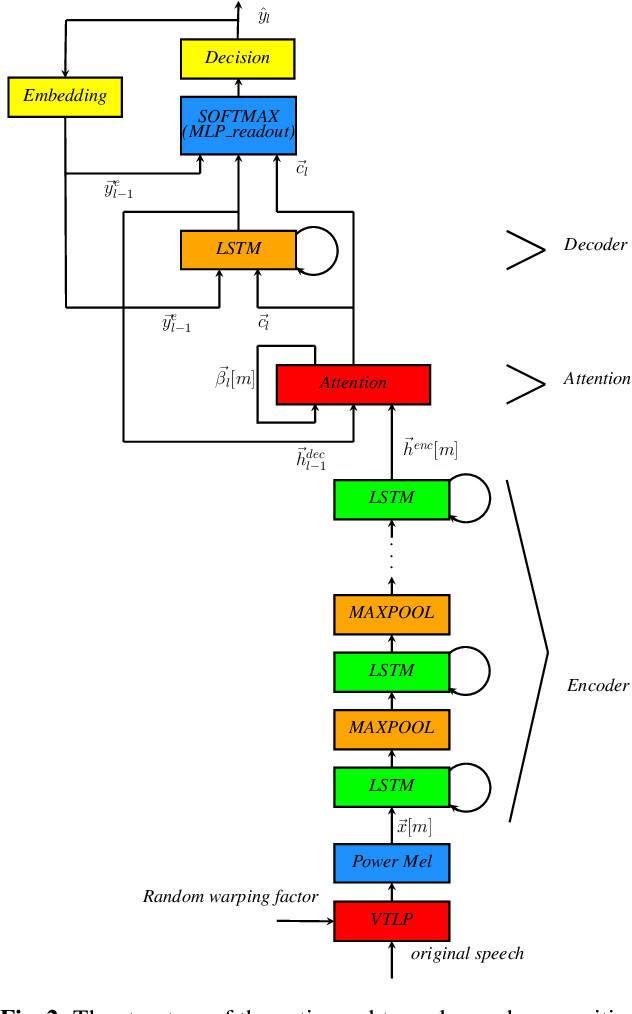 In this paper, we present an end-to-end training framework for building state-of-the-art end-to-end speech recognition systems. Our training system utilizes a cluster of Central Processing Units(CPUs) and Graphics Processing Units (GPUs). The entire data reading, large scale data augmentation, neural network parameter updates are all performed "on-the-fly". We use vocal tract length perturbation [1] and an acoustic simulator [2] for data augmentation. The processed features and labels are sent to the GPU cluster. The Horovod allreduce approach is employed to train neural network parameters. We evaluated the effectiveness of our system on the standard Librispeech corpus [3] and the 10,000-hr anonymized Bixby English dataset. Our end-to-end speech recognition system built using this training infrastructure showed a 2.44 % WER on test-clean of the LibriSpeech test set after applying shallow fusion with a Transformer language model (LM). For the proprietary English Bixby open domain test set, we obtained a WER of 7.92 % using a Bidirectional Full Attention (BFA) end-to-end model after applying shallow fusion with an RNN-LM. When the monotonic chunckwise attention (MoCha) based approach is employed for streaming speech recognition, we obtained a WER of 9.95 % on the same Bixby open domain test set.


* Accepted and presented at the ASRU 2019 conference

Speech processing requires very efficient methods and algorithms. Finite-state transducers have been shown recently both to constitute a very useful abstract model and to lead to highly efficient time and space algorithms in this field. We present these methods and algorithms and illustrate them in the case of speech recognition. In addition to classical techniques, we describe many new algorithms such as minimization, global and local on-the-fly determinization of weighted automata, and efficient composition of transducers. These methods are currently used in large vocabulary speech recognition systems. We then show how the same formalism and algorithms can be used in text-to-speech applications and related areas of language processing such as morphology, syntax, and local grammars, in a very efficient way. The tutorial is self-contained and requires no specific computational or linguistic knowledge other than classical results.