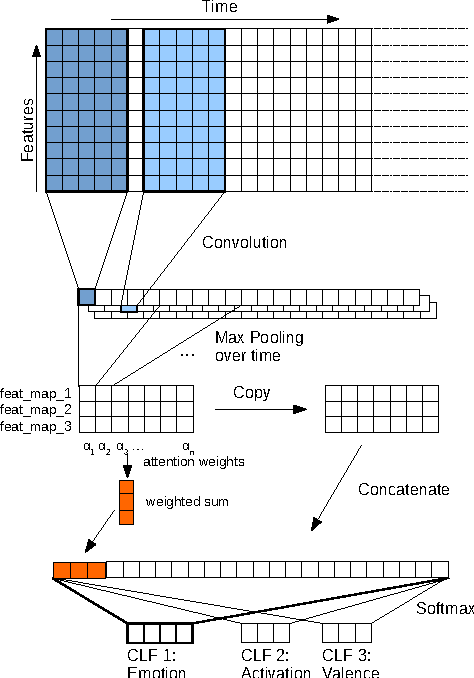 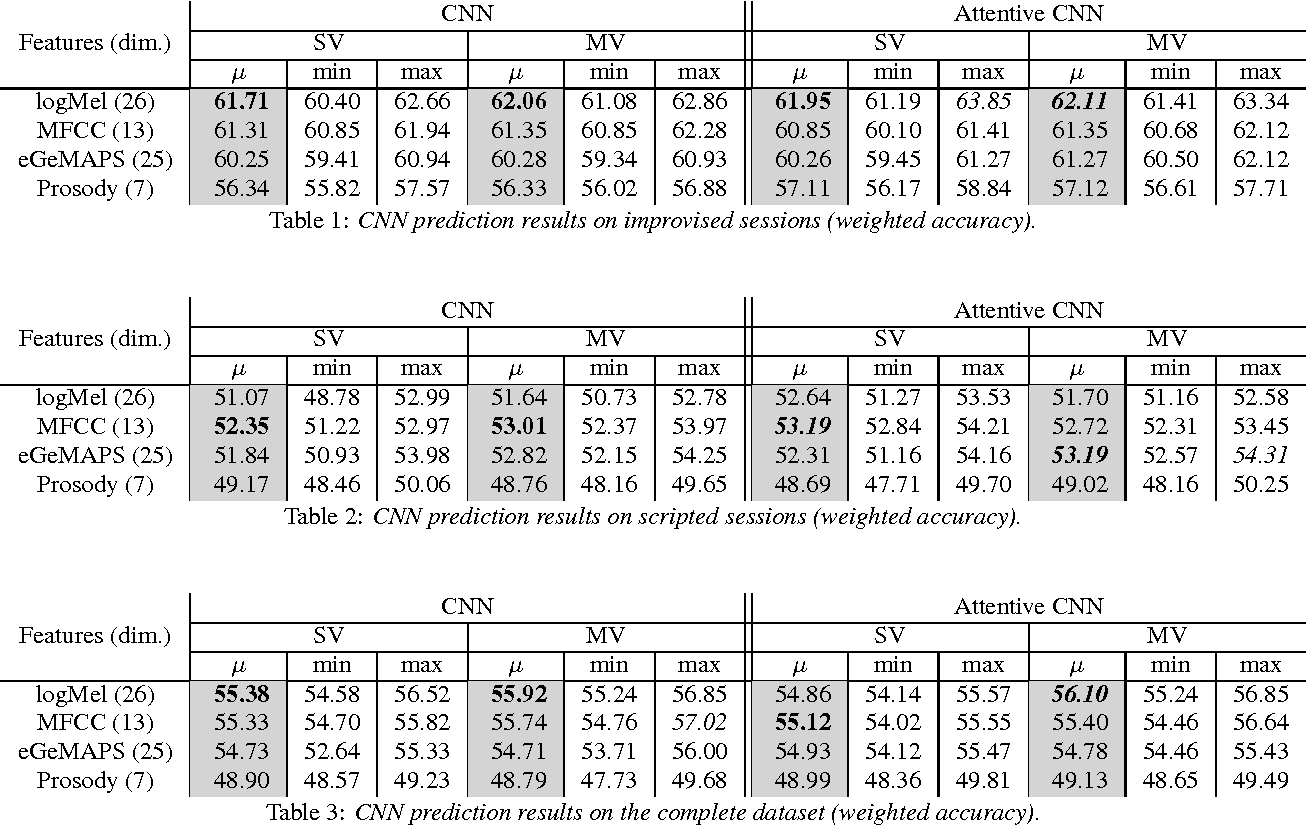 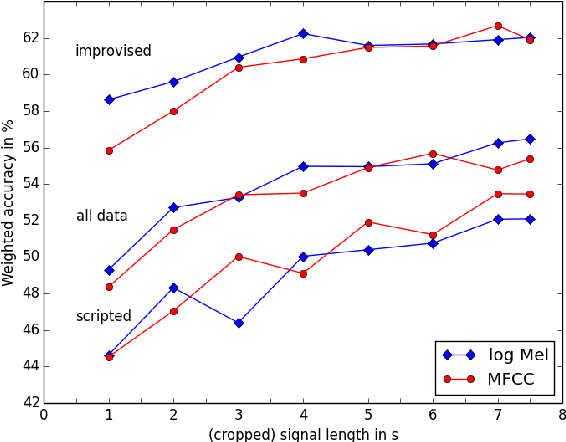 Speech emotion recognition is an important and challenging task in the realm of human-computer interaction. Prior work proposed a variety of models and feature sets for training a system. In this work, we conduct extensive experiments using an attentive convolutional neural network with multi-view learning objective function. We compare system performance using different lengths of the input signal, different types of acoustic features and different types of emotion speech (improvised/scripted). Our experimental results on the Interactive Emotional Motion Capture (IEMOCAP) database reveal that the recognition performance strongly depends on the type of speech data independent of the choice of input features. Furthermore, we achieved state-of-the-art results on the improvised speech data of IEMOCAP.


* to appear in the proceedings of Interspeech 2017 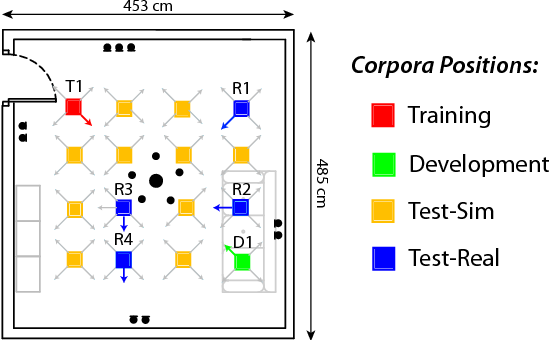 Despite the significant progress made in the last years, state-of-the-art speech recognition technologies provide a satisfactory performance only in the close-talking condition. Robustness of distant speech recognition in adverse acoustic conditions, on the other hand, remains a crucial open issue for future applications of human-machine interaction. To this end, several advances in speech enhancement, acoustic scene analysis as well as acoustic modeling, have recently contributed to improve the state-of-the-art in the field. One of the most effective approaches to derive a robust acoustic modeling is based on using contaminated speech, which proved helpful in reducing the acoustic mismatch between training and testing conditions. In this paper, we revise this classical approach in the context of modern DNN-HMM systems, and propose the adoption of three methods, namely, asymmetric context windowing, close-talk based supervision, and close-talk based pre-training. The experimental results, obtained using both real and simulated data, show a significant advantage in using these three methods, overall providing a 15% error rate reduction compared to the baseline systems. The same trend in performance is confirmed either using a high-quality training set of small size, and a large one.

Global Normalization for Streaming Speech Recognition in a Modular Framework 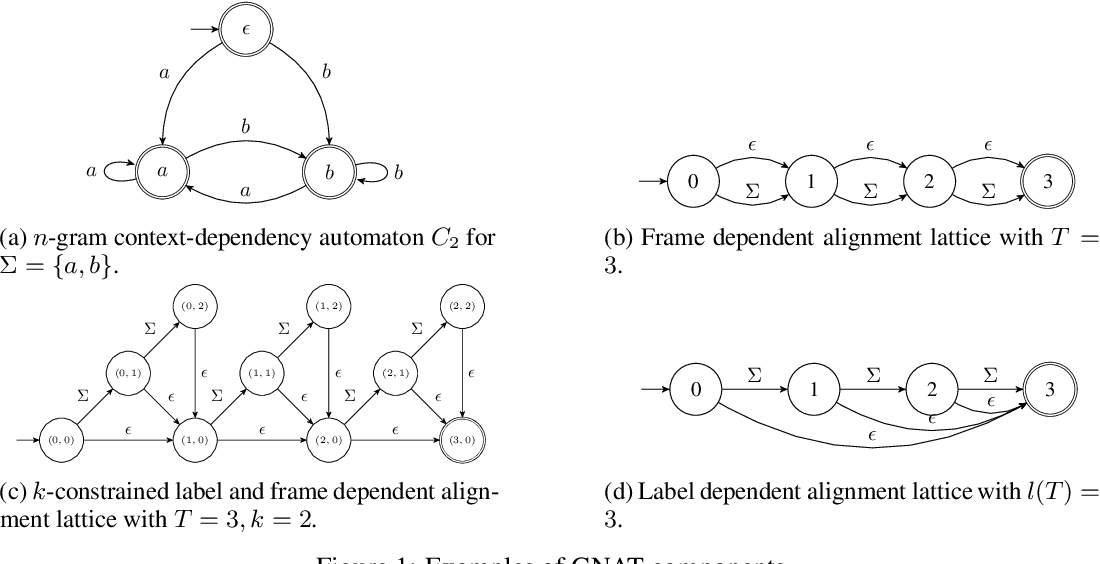 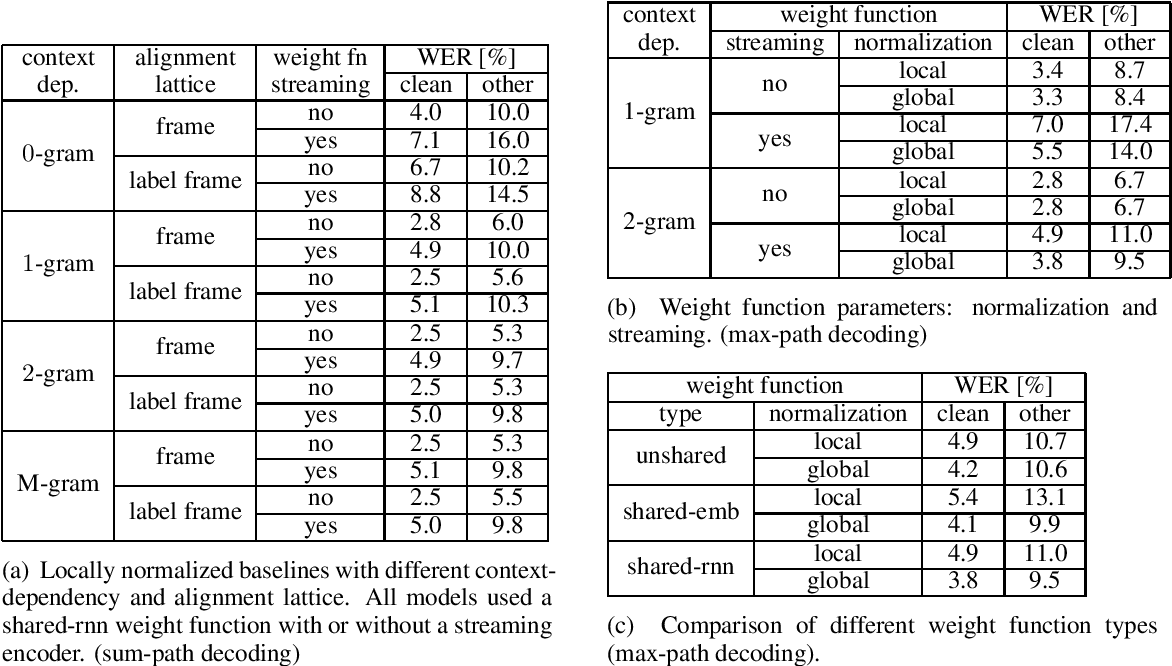 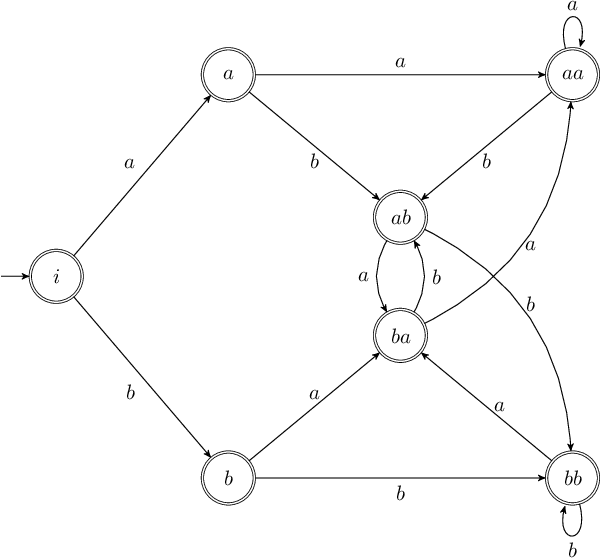 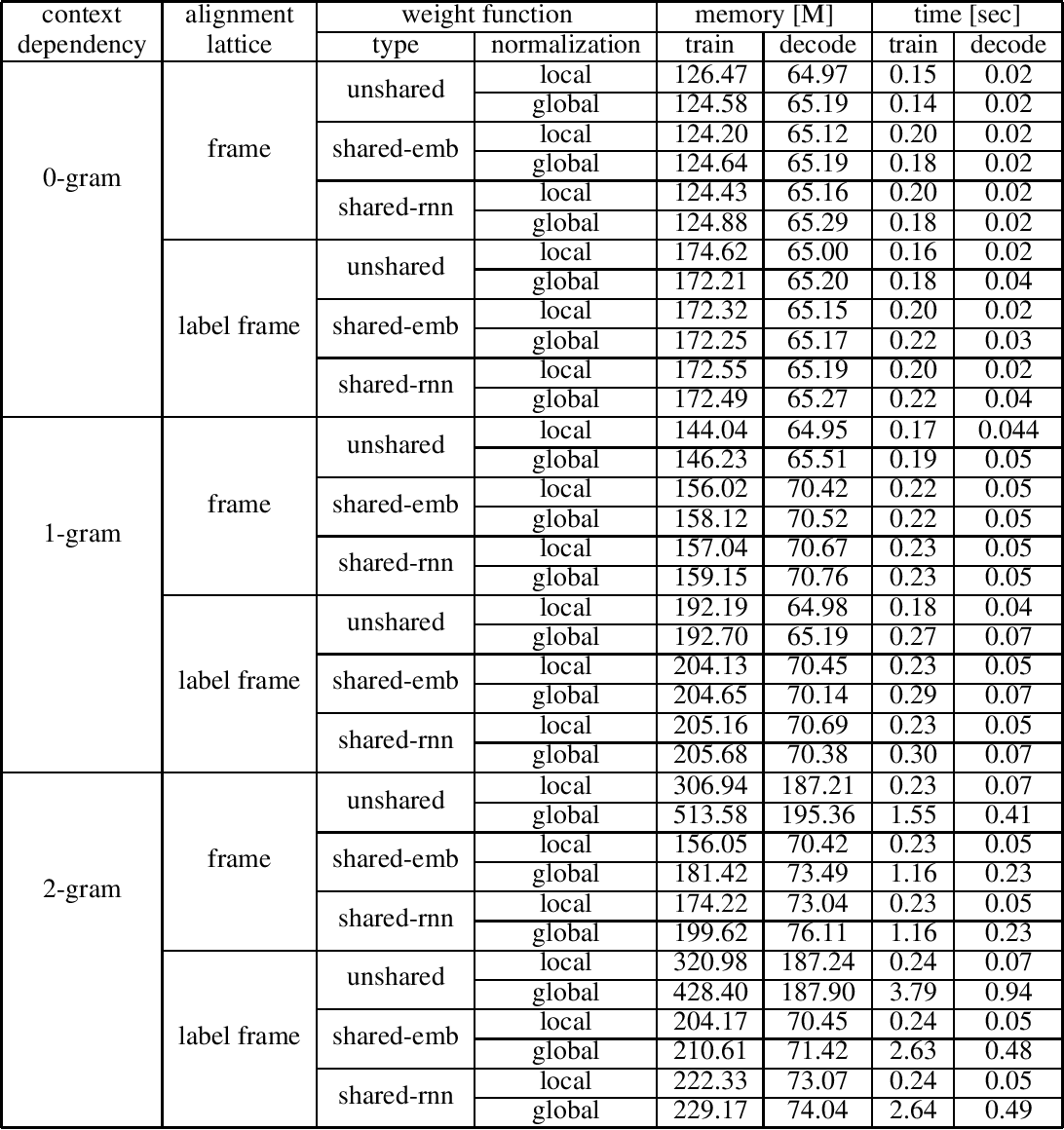 We introduce the Globally Normalized Autoregressive Transducer (GNAT) for addressing the label bias problem in streaming speech recognition. Our solution admits a tractable exact computation of the denominator for the sequence-level normalization. Through theoretical and empirical results, we demonstrate that by switching to a globally normalized model, the word error rate gap between streaming and non-streaming speech-recognition models can be greatly reduced (by more than 50\% on the Librispeech dataset). This model is developed in a modular framework which encompasses all the common neural speech recognition models. The modularity of this framework enables controlled comparison of modelling choices and creation of new models. 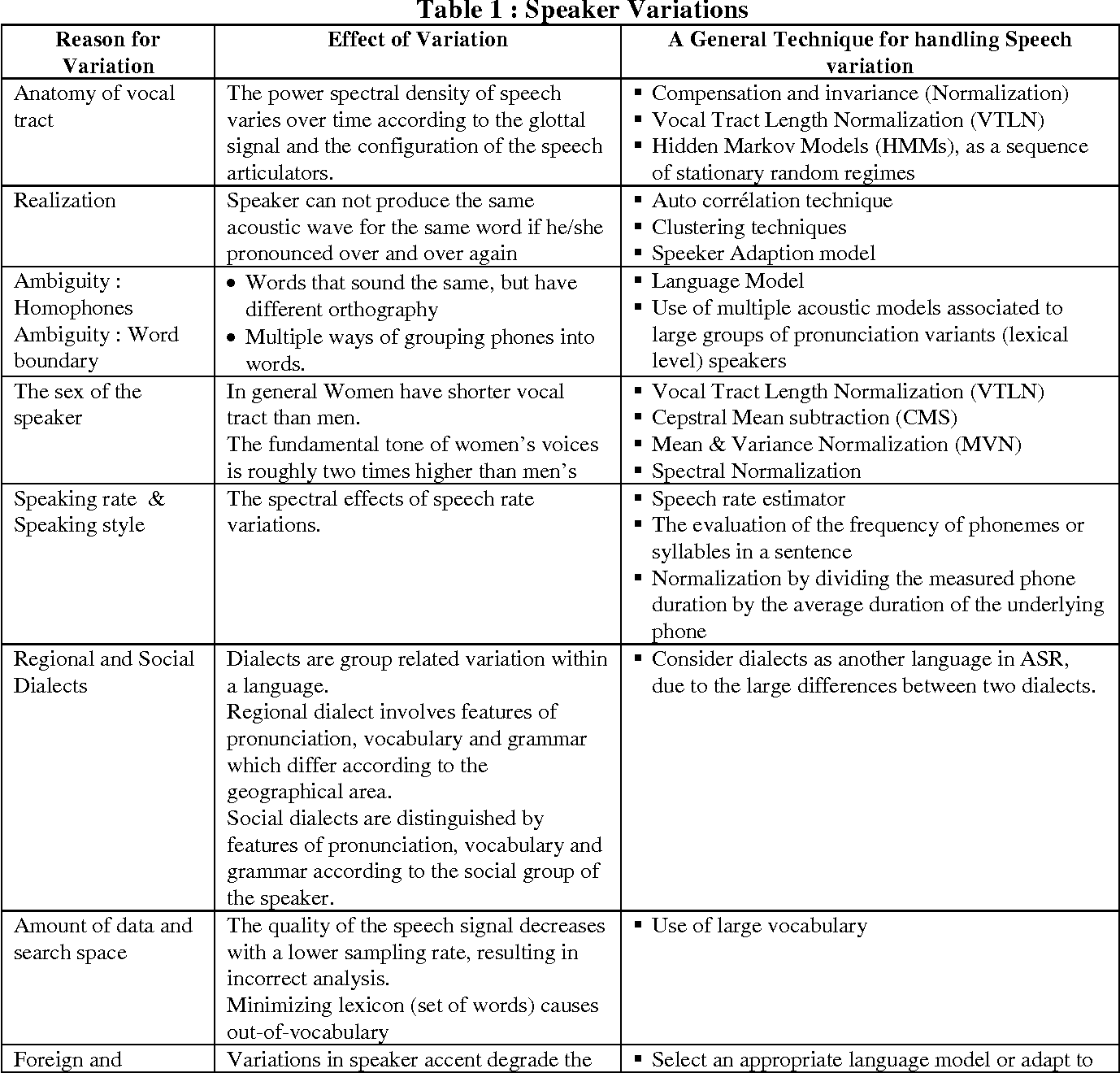 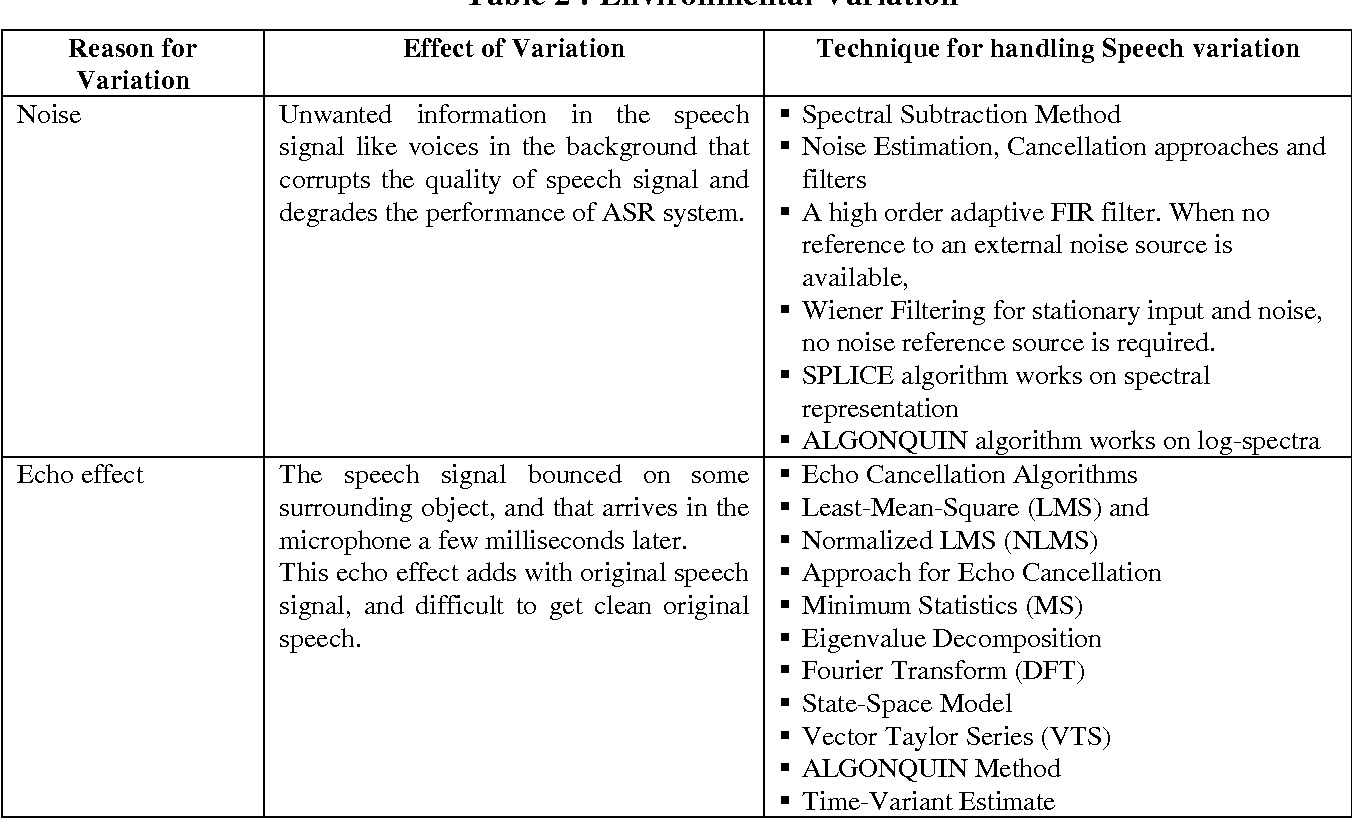 The main motivation for Automatic Speech Recognition (ASR) is efficient interfaces to computers, and for the interfaces to be natural and truly useful, it should provide coverage for a large group of users. The purpose of these tasks is to further improve man-machine communication. ASR systems exhibit unacceptable degradations in performance when the acoustical environments used for training and testing the system are not the same. The goal of this research is to increase the robustness of the speech recognition systems with respect to changes in the environment. A system can be labeled as environment-independent if the recognition accuracy for a new environment is the same or higher than that obtained when the system is retrained for that environment. Attaining such performance is the dream of the researchers. This paper elaborates some of the difficulties with Automatic Speech Recognition (ASR). These difficulties are classified into Speakers characteristics and environmental conditions, and tried to suggest some techniques to compensate variations in speech signal. This paper focuses on the robustness with respect to speakers variations and changes in the acoustical environment. We discussed several different external factors that change the environment and physiological differences that affect the performance of a speech recognition system followed by techniques that are helpful to design a robust ASR system. 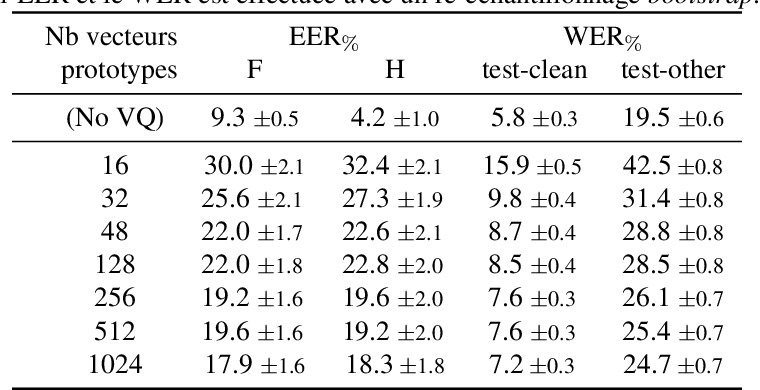 With the popularity of virtual assistants (e.g., Siri, Alexa), the use of speech recognition is now becoming more and more widespread.However, speech signals contain a lot of sensitive information, such as the speaker's identity, which raises privacy concerns.The presented experiments show that the representations extracted by the deep layers of speech recognition networks contain speaker information.This paper aims to produce an anonymous representation while preserving speech recognition performance.To this end, we propose to use vector quantization to constrain the representation space and induce the network to suppress the speaker identity.The choice of the quantization dictionary size allows to configure the trade-off between utility (speech recognition) and privacy (speaker identity concealment). 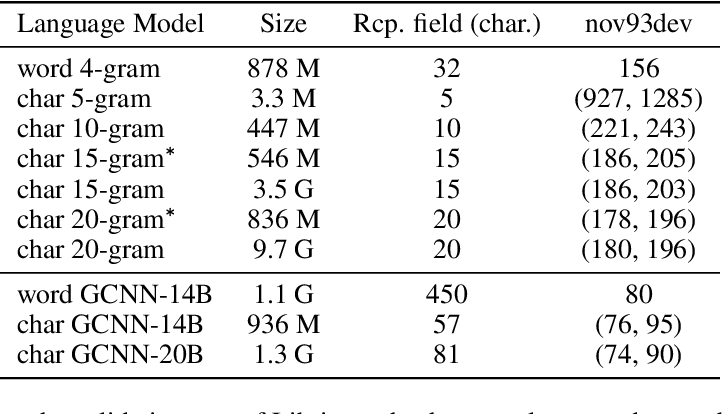 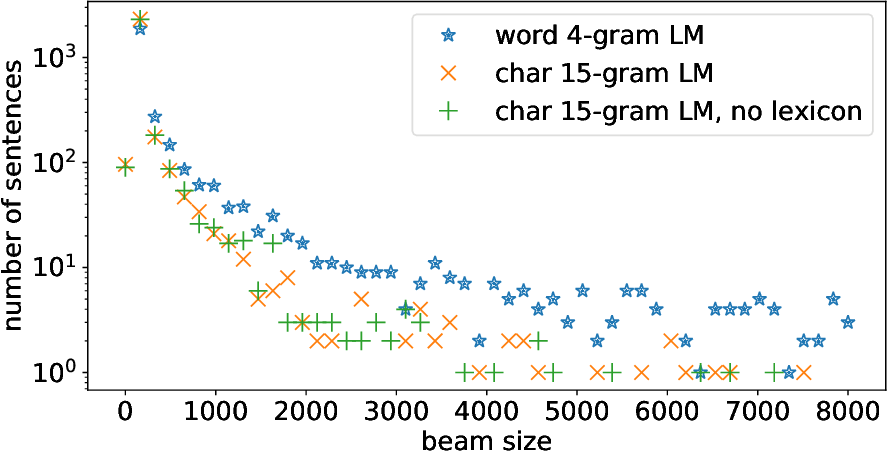 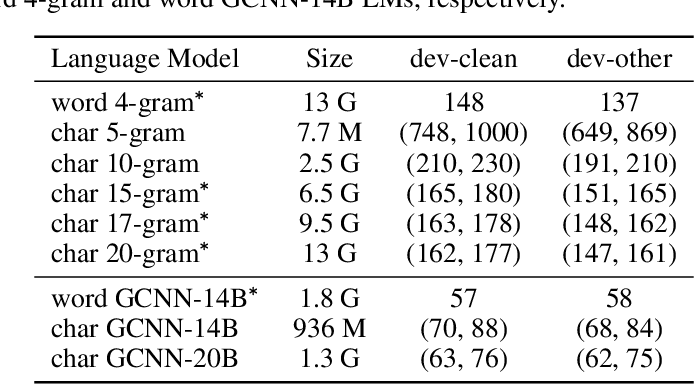 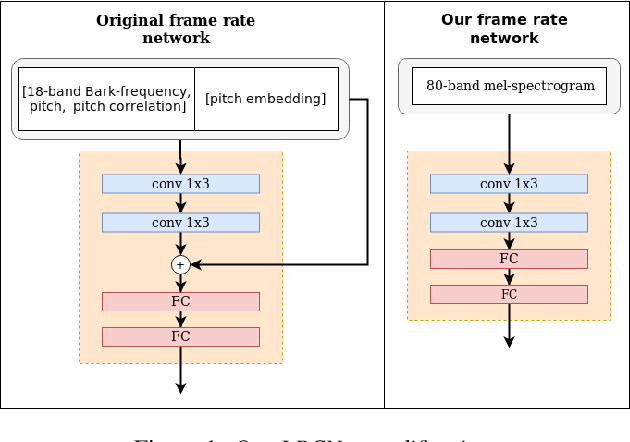 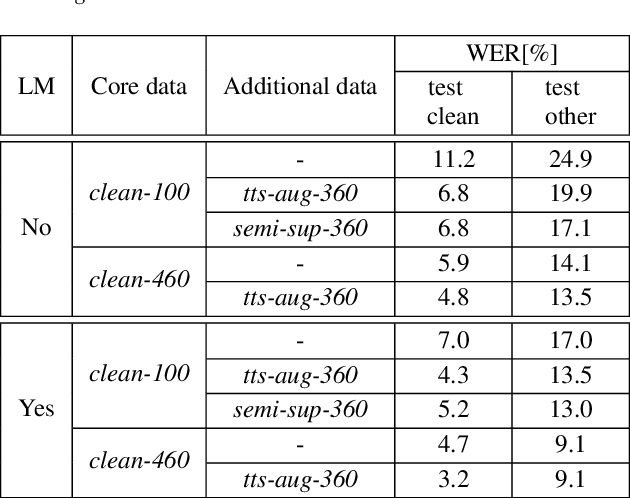 Data augmentation is one of the most effective ways to make end-to-end automatic speech recognition (ASR) perform close to the conventional hybrid approach, especially when dealing with low-resource tasks. Using recent advances in speech synthesis (text-to-speech, or TTS), we build our TTS system on an ASR training database and then extend the data with synthesized speech to train a recognition model. We argue that, when the training data amount is low, this approach can allow an end-to-end model to reach hybrid systems' quality. For an artificial low-resource setup, we compare the proposed augmentation with the semi-supervised learning technique. We also investigate the influence of vocoder usage on final ASR performance by comparing Griffin-Lim algorithm with our modified LPCNet. An external language model allows our approach to reach the quality of a comparable supervised setup and outperform a semi-supervised setup (both on test-clean). We establish a state-of-the-art result for end-to-end ASR trained on LibriSpeech train-clean-100 set with WER 4.3% on test-clean and 13.5% on test-other.

Modern end-to-end speech recognition models show astonishing results in transcribing audio signals into written text. However, conventional data feeding pipelines may be sub-optimal for low-resource speech recognition, which still remains a challenging task. We propose an automated curriculum learning approach to optimize the sequence of training examples based on both the progress of the model while training and prior knowledge about the difficulty of the training examples. We introduce a new difficulty measure called compression ratio that can be used as a scoring function for raw audio in various noise conditions. The proposed method improves speech recognition Word Error Rate performance by up to 33% relative over the baseline system

Data Augmentation for Speech Recognition in Maltese: A Low-Resource Perspective 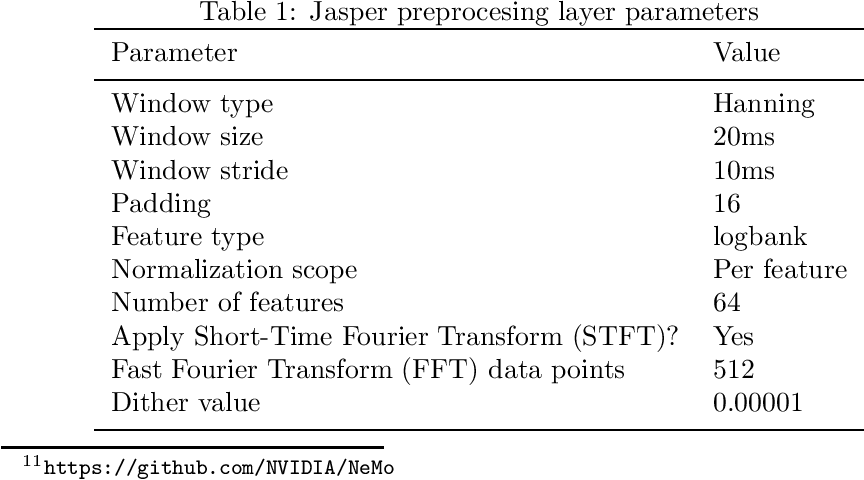 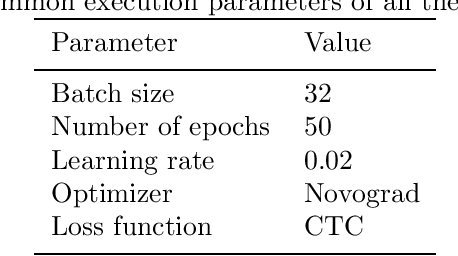 Developing speech technologies is a challenge for low-resource languages for which both annotated and raw speech data is sparse. Maltese is one such language. Recent years have seen an increased interest in the computational processing of Maltese, including speech technologies, but resources for the latter remain sparse. In this paper, we consider data augmentation techniques for improving speech recognition for such languages, focusing on Maltese as a test case. We consider three different types of data augmentation: unsupervised training, multilingual training and the use of synthesized speech as training data. The goal is to determine which of these techniques, or combination of them, is the most effective to improve speech recognition for languages where the starting point is a small corpus of approximately 7 hours of transcribed speech. Our results show that combining the three data augmentation techniques studied here lead us to an absolute WER improvement of 15% without the use of a language model. 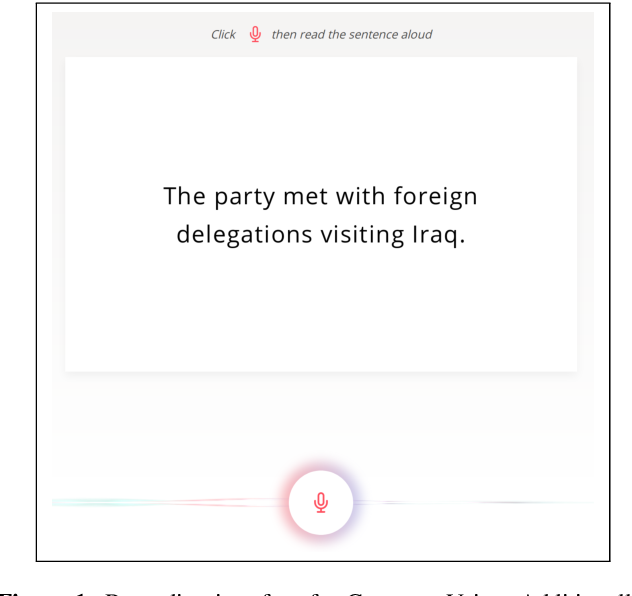 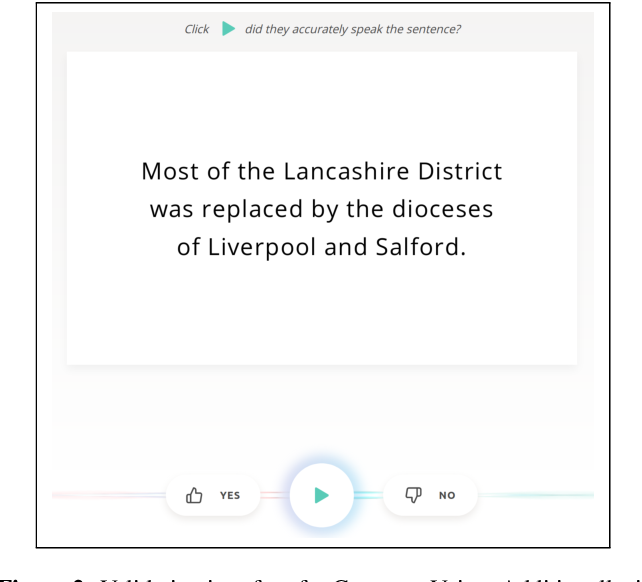 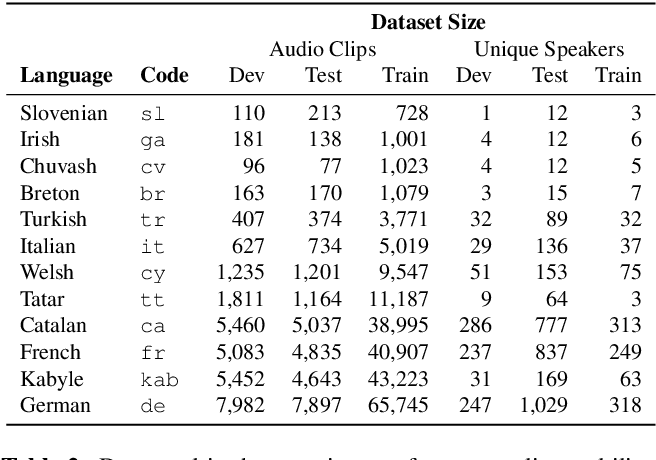 The Common Voice corpus is a massively-multilingual collection of transcribed speech intended for speech technology research and development. Common Voice is designed for Automatic Speech Recognition purposes but can be useful in other domains (e.g. language identification). To achieve scale and sustainability, the Common Voice project employs crowdsourcing for both data collection and data validation. The most recent release includes 29 languages, and as of November 2019 there are a total of 38 languages collecting data. Over 50,000 individuals have participated so far, resulting in 2,500 hours of collected audio. To our knowledge this is the largest audio corpus in the public domain for speech recognition, both in terms of number of hours and number of languages. As an example use case for Common Voice, we present speech recognition experiments using Mozilla's DeepSpeech Speech-to-Text toolkit. By applying transfer learning from a source English model, we find an average Character Error Rate improvement of 5.99 +/- 5.48 for twelve target languages (German, French, Italian, Turkish, Catalan, Slovenian, Welsh, Irish, Breton, Tatar, Chuvash, and Kabyle). For most of these languages, these are the first ever published results on end-to-end Automatic Speech Recognition.