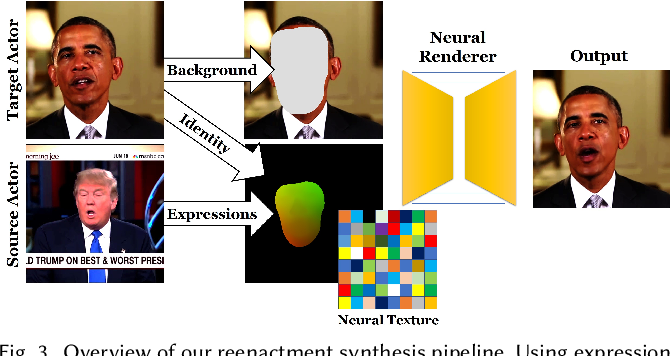 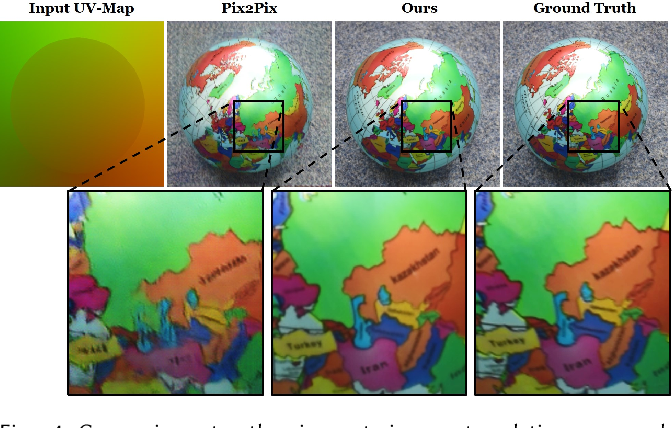 The modern computer graphics pipeline can synthesize images at remarkable visual quality; however, it requires well-defined, high-quality 3D content as input. In this work, we explore the use of imperfect 3D content, for instance, obtained from photo-metric reconstructions with noisy and incomplete surface geometry, while still aiming to produce photo-realistic (re-)renderings. To address this challenging problem, we introduce Deferred Neural Rendering, a new paradigm for image synthesis that combines the traditional graphics pipeline with learnable components. Specifically, we propose Neural Textures, which are learned feature maps that are trained as part of the scene capture process. Similar to traditional textures, neural textures are stored as maps on top of 3D mesh proxies; however, the high-dimensional feature maps contain significantly more information, which can be interpreted by our new deferred neural rendering pipeline. Both neural textures and deferred neural renderer are trained end-to-end, enabling us to synthesize photo-realistic images even when the original 3D content was imperfect. In contrast to traditional, black-box 2D generative neural networks, our 3D representation gives us explicit control over the generated output, and allows for a wide range of application domains. For instance, we can synthesize temporally-consistent video re-renderings of recorded 3D scenes as our representation is inherently embedded in 3D space. This way, neural textures can be utilized to coherently re-render or manipulate existing video content in both static and dynamic environments at real-time rates. We show the effectiveness of our approach in several experiments on novel view synthesis, scene editing, and facial reenactment, and compare to state-of-the-art approaches that leverage the standard graphics pipeline as well as conventional generative neural networks. 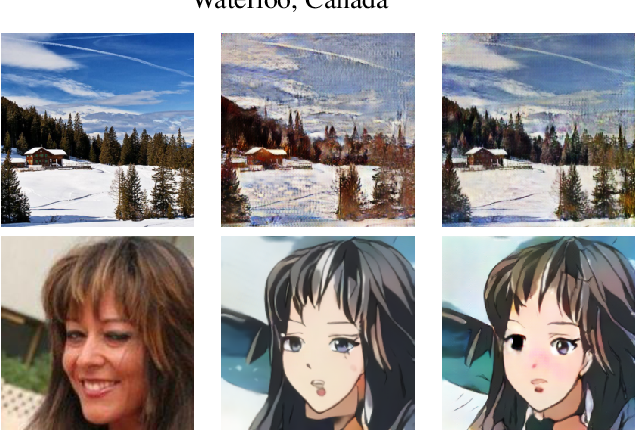 Automated captioning of photos is a mission that incorporates the difficulties of photo analysis and text generation. One essential feature of captioning is the concept of attention: how to determine what to specify and in which sequence. In this study, we leverage the Object Relation using adversarial robust cut algorithm, that grows upon this method by specifically embedding knowledge about the spatial association between input data through graph representation. Our experimental study represent the promising performance of our proposed method for image captioning. 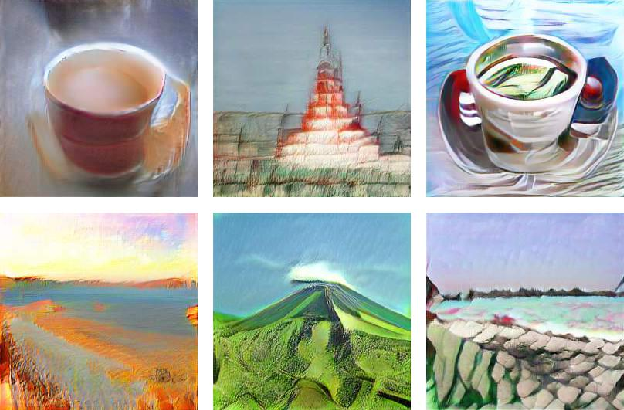 We analyze the spaces of images encoded by generative networks of the BigGAN architecture. We find that generic multiplicative perturbations away from the photo-realistic point often lead to images which appear as "artistic renditions" of the corresponding objects. This demonstrates an emergence of aesthetic properties directly from the structure of the photo-realistic environment coupled with its neural network parametrization. Moreover, modifying a deep semantic part of the neural network encoding leads to the appearance of symbolic visual representations.

A Novel Method for Vectorization 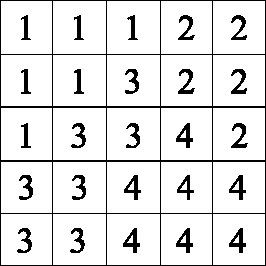 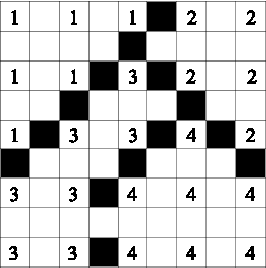 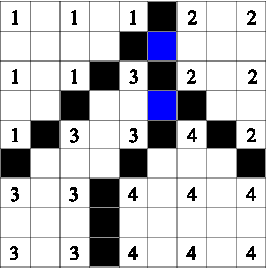 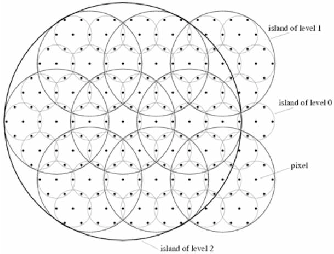 Vectorization of images is a key concern uniting computer graphics and computer vision communities. In this paper we are presenting a novel idea for efficient, customizable vectorization of raster images, based on Catmull Rom spline fitting. The algorithm maintains a good balance between photo-realism and photo abstraction, and hence is applicable to applications with artistic concerns or applications where less information loss is crucial. The resulting algorithm is fast, parallelizable and can satisfy general soft realtime requirements. Moreover, the smoothness of the vectorized images aesthetically outperforms outputs of many polygon-based methods


* Prepared in Siggraph format, not published in a conference, 7 pages, 9 figures 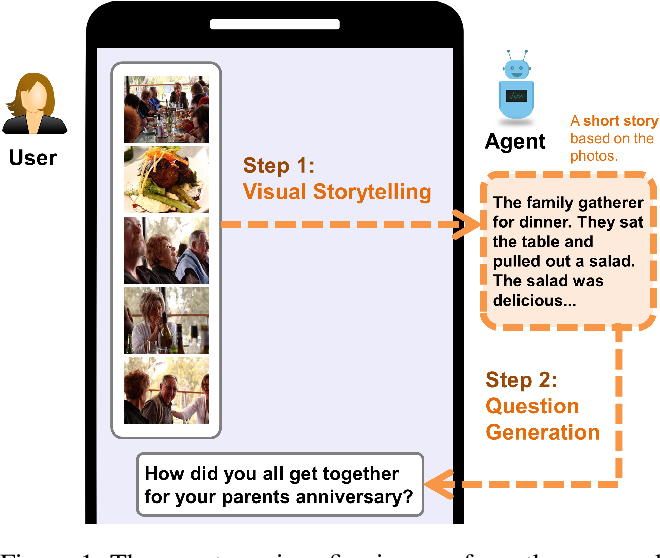 An engaging and provocative question can open up a great conversation. In this work, we explore a novel scenario: a conversation agent views a set of the user's photos (for example, from social media platforms) and asks an engaging question to initiate a conversation with the user. The existing vision-to-question models mostly generate tedious and obvious questions, which might not be ideals conversation starters. This paper introduces a two-phase framework that first generates a visual story for the photo set and then uses the story to produce an interesting question. The human evaluation shows that our framework generates more response-provoking questions for starting conversations than other vision-to-question baselines.


* Accepted as a full talk paper on AAAI-DEEPDIAL'21 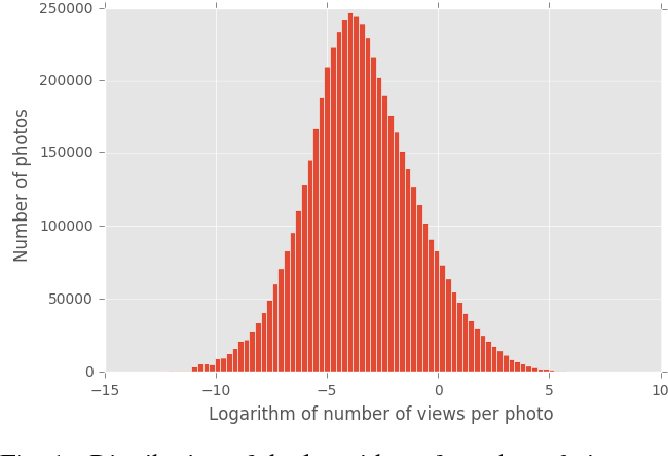 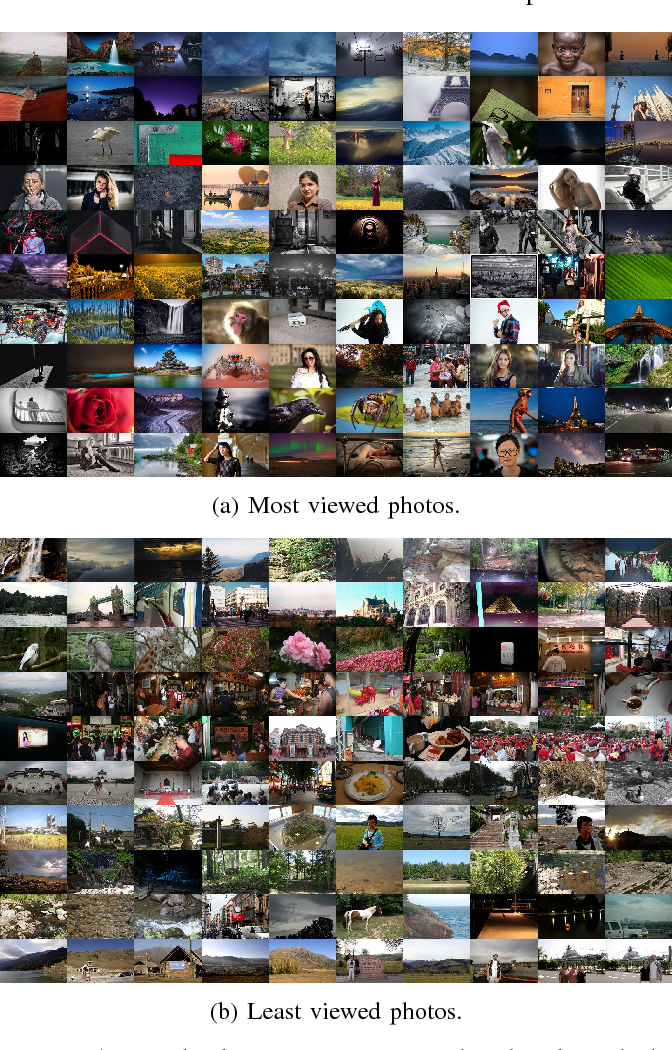 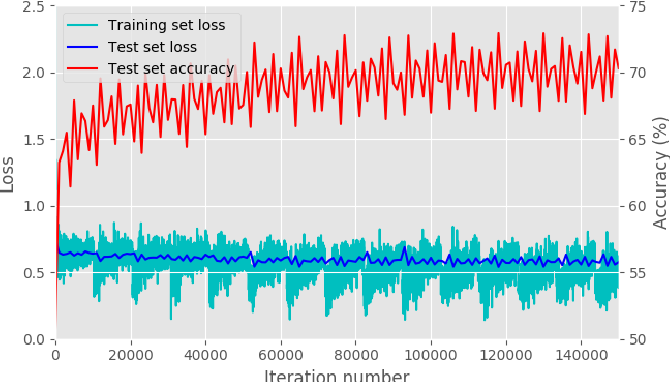 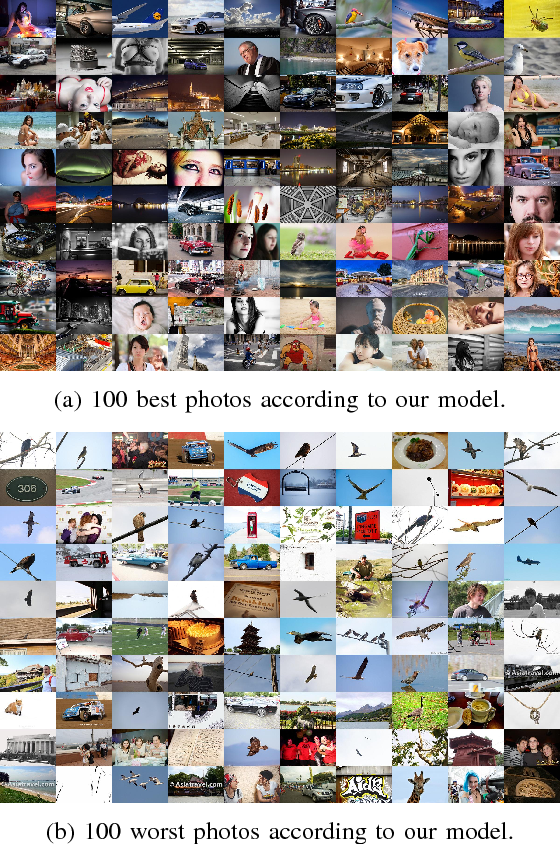 Evaluating aesthetic value of digital photographs is a challenging task, mainly due to numerous factors that need to be taken into account and subjective manner of this process. In this paper, we propose to approach this problem using deep convolutional neural networks. Using a dataset of over 1.7 million photos collected from Flickr, we train and evaluate a deep learning model whose goal is to classify input images by analysing their aesthetic value. The result of this work is a publicly available Web-based application that can be used in several real-life applications, e.g. to improve the workflow of professional photographers by pre-selecting the best photos. 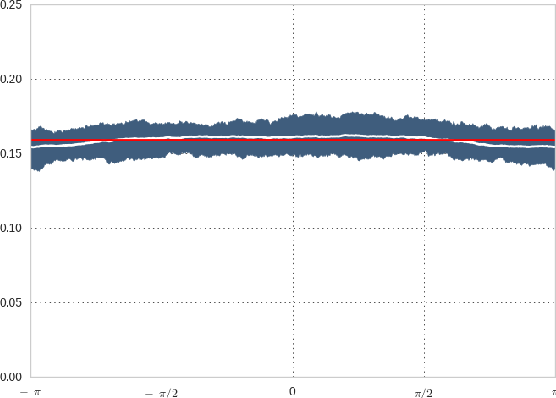 In this work we focused on GAN-based solution for the attribute guided face synthesis. Previous works exploited GANs for generation of photo-realistic face images and did not pay attention to the question of diversity of the resulting images. The proposed solution in its turn introducing novel latent space of unit complex numbers is able to provide the diversity on the "birthday paradox" score 3 times higher than the size of the training dataset. It is important to emphasize that our result is shown on relatively small dataset (20k samples vs 200k) while preserving photo-realistic properties of generated faces on significantly higher resolution (128x128 in comparison to 32x32 of previous works).

From Culture to Clothing: Discovering the World Events Behind A Century of Fashion Images 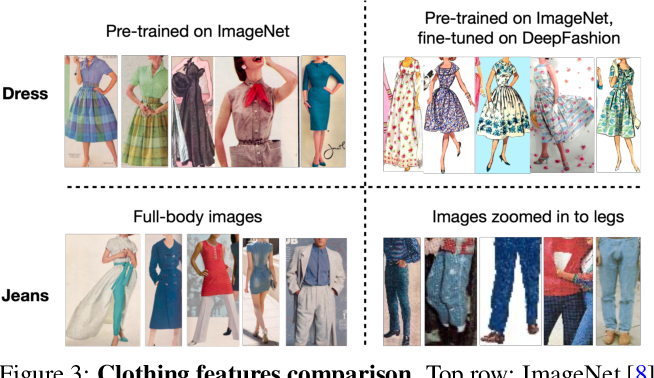 Fashion is intertwined with external cultural factors, but identifying these links remains a manual process limited to only the most salient phenomena. We propose a data-driven approach to identify specific cultural factors affecting the clothes people wear. Using large-scale datasets of news articles and vintage photos spanning a century, we introduce a multi-modal statistical model to detect influence relationships between happenings in the world and people's choice of clothing. Furthermore, we apply our model to improve the concrete vision tasks of visual style forecasting and photo timestamping on two datasets. Our work is a first step towards a computational, scalable, and easily refreshable approach to link culture to clothing. 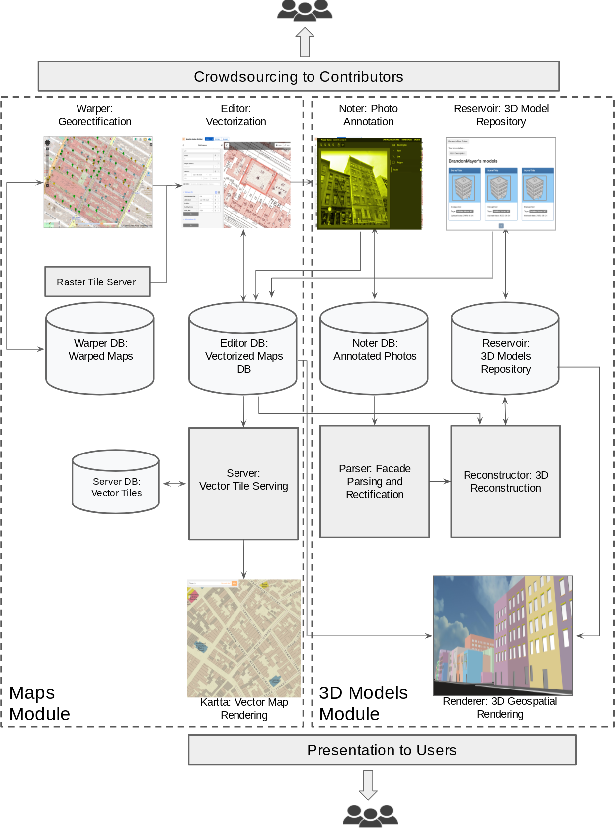 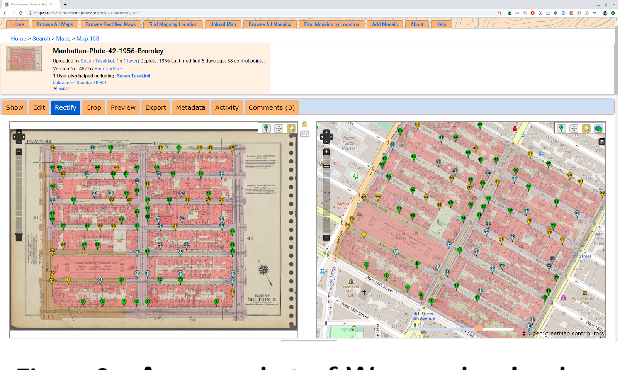 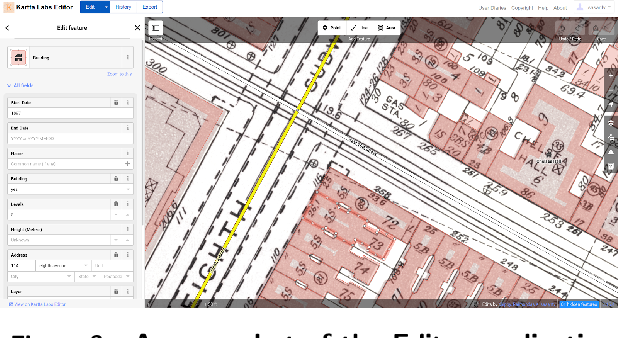 We introduce the modular and scalable design of Kartta Labs, an open source, open data, and scalable system for virtually reconstructing cities from historical maps and photos. Kartta Labs relies on crowdsourcing and artificial intelligence consisting of two major modules: Maps and 3D models. Each module, in turn, consists of sub-modules that enable the system to reconstruct a city from historical maps and photos. The result is a spatiotemporal reference that can be used to integrate various collected data (curated, sensed, or crowdsourced) for research, education, and entertainment purposes. The system empowers the users to experience collaborative time travel such that they work together to reconstruct the past and experience it on an open source and open data platform.