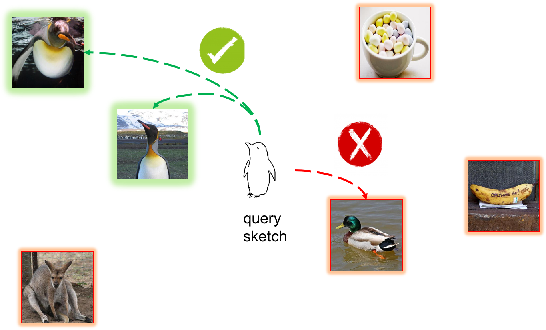 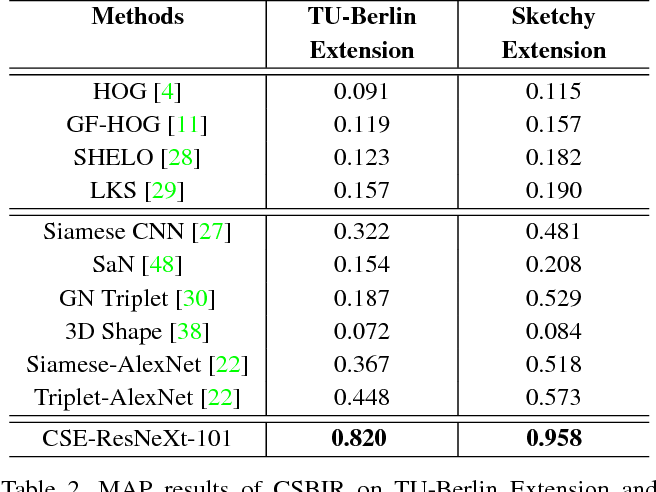 This paper addresses the problem of Sketch-Based Image Retrieval (SBIR), for which bridge the gap between the data representations of sketch images and photo images is considered as the key. Previous works mostly focus on learning a feature space to minimize intra-class distances for both sketches and photos. In contrast, we propose a novel loss function, named Euclidean Margin Softmax (EMS), that not only minimizes intra-class distances but also maximizes inter-class distances simultaneously. It enables us to learn a feature space with high discriminability, leading to highly accurate retrieval. In addition, this loss function is applied to a conditional network architecture, which could incorporate the prior knowledge of whether a sample is a sketch or a photo. We show that the conditional information can be conveniently incorporated to the recently proposed Squeeze and Excitation (SE) module, lead to a conditional SE (CSE) module. Extensive experiments are conducted on two widely used SBIR benchmark datasets. Our approach, although being very simple, achieved new state-of-the-art on both datasets, surpassing existing methods by a large margin. 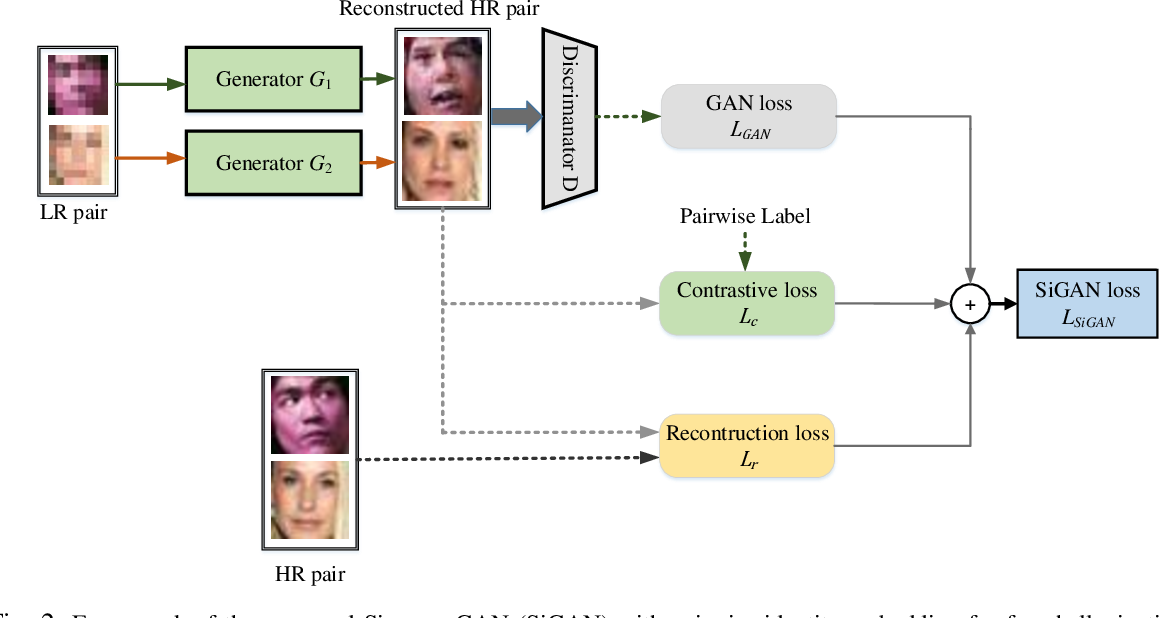 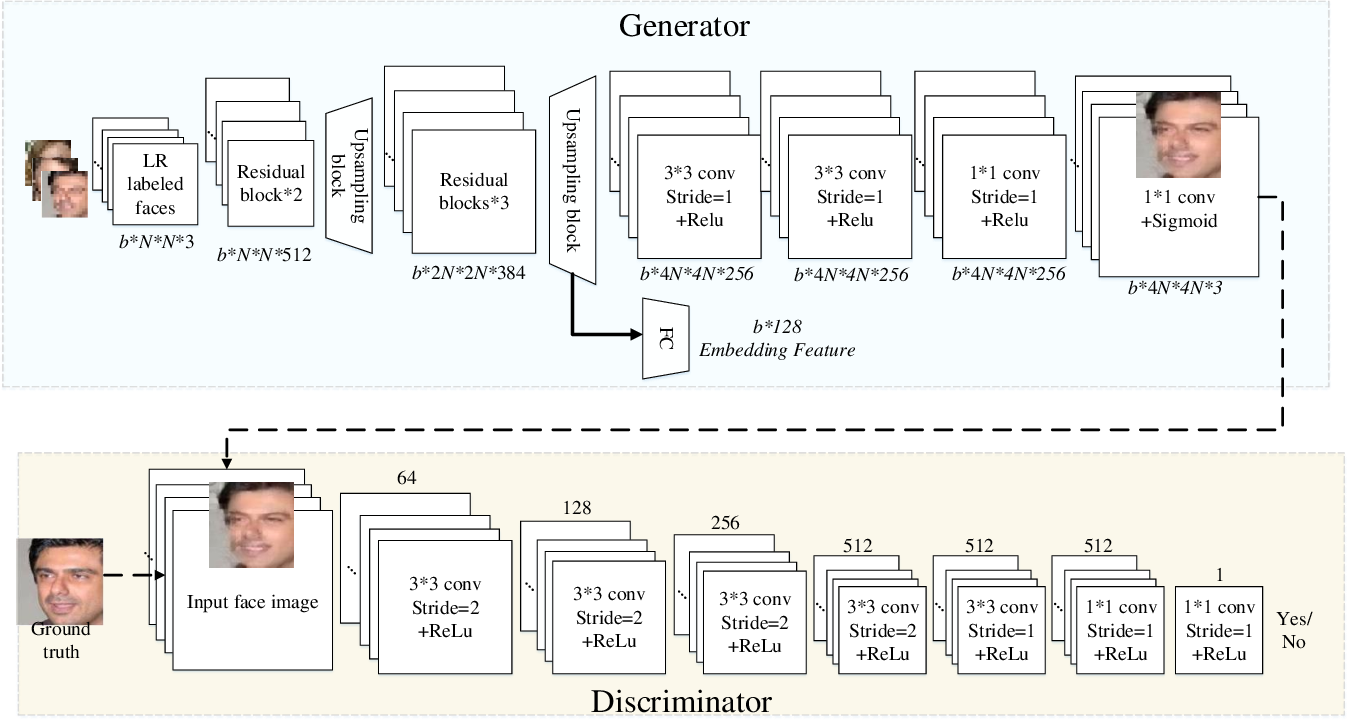 Despite generative adversarial networks (GANs) can hallucinate photo-realistic high-resolution (HR) faces from low-resolution (LR) faces, they cannot guarantee preserving the identities of hallucinated HR faces, making the HR faces poorly recognizable. To address this problem, we propose a Siamese GAN (SiGAN) to reconstruct HR faces that visually resemble their corresponding identities. On top of a Siamese network, the proposed SiGAN consists of a pair of two identical generators and one discriminator. We incorporate reconstruction error and identity label information in the loss function of SiGAN in a pairwise manner. By iteratively optimizing the loss functions of the generator pair and discriminator of SiGAN, we cannot only achieve photo-realistic face reconstruction, but also ensures the reconstructed information is useful for identity recognition. Experimental results demonstrate that SiGAN significantly outperforms existing face hallucination GANs in objective face verification performance, while achieving photo-realistic reconstruction. Moreover, for input LR faces from unknown identities who are not included in training, SiGAN can still do a good job. 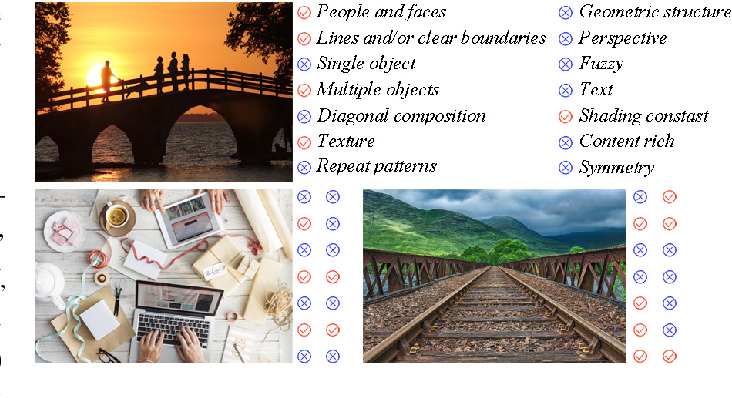 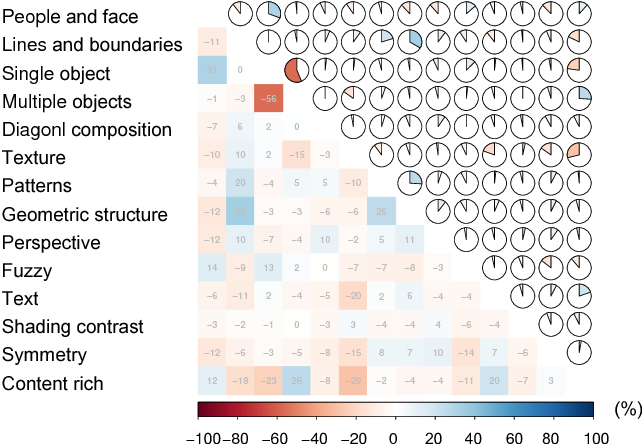 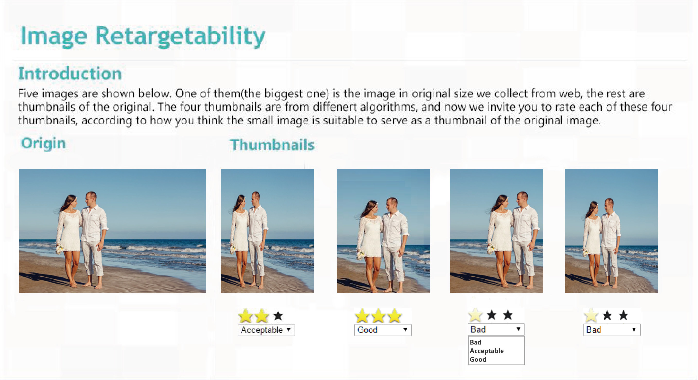 Real-world applications could benefit from the ability to automatically retarget an image to different aspect ratios and resolutions, while preserving its visually and semantically important content. However, not all images can be equally well processed that way. In this work, we introduce the notion of image retargetability to describe how well a particular image can be handled by content-aware image retargeting. We propose to learn a deep convolutional neural network to rank photo retargetability in which the relative ranking of photo retargetability is directly modeled in the loss function. Our model incorporates joint learning of meaningful photographic attributes and image content information which can help regularize the complicated retargetability rating problem. To train and analyze this model, we have collected a database which contains retargetability scores and meaningful image attributes assigned by six expert raters. Experiments demonstrate that our unified model can generate retargetability rankings that are highly consistent with human labels. To further validate our model, we show applications of image retargetability in retargeting method selection, retargeting method assessment and photo collage generation.

Human free-hand sketches have been studied in various contexts including sketch recognition, synthesis and fine-grained sketch-based image retrieval (FG-SBIR). A fundamental challenge for sketch analysis is to deal with drastically different human drawing styles, particularly in terms of abstraction level. In this work, we propose the first stroke-level sketch abstraction model based on the insight of sketch abstraction as a process of trading off between the recognizability of a sketch and the number of strokes used to draw it. Concretely, we train a model for abstract sketch generation through reinforcement learning of a stroke removal policy that learns to predict which strokes can be safely removed without affecting recognizability. We show that our abstraction model can be used for various sketch analysis tasks including: (1) modeling stroke saliency and understanding the decision of sketch recognition models, (2) synthesizing sketches of variable abstraction for a given category, or reference object instance in a photo, and (3) training a FG-SBIR model with photos only, bypassing the expensive photo-sketch pair collection step.

An Image is Worth More than a Thousand Favorites: Surfacing the Hidden Beauty of Flickr Pictures 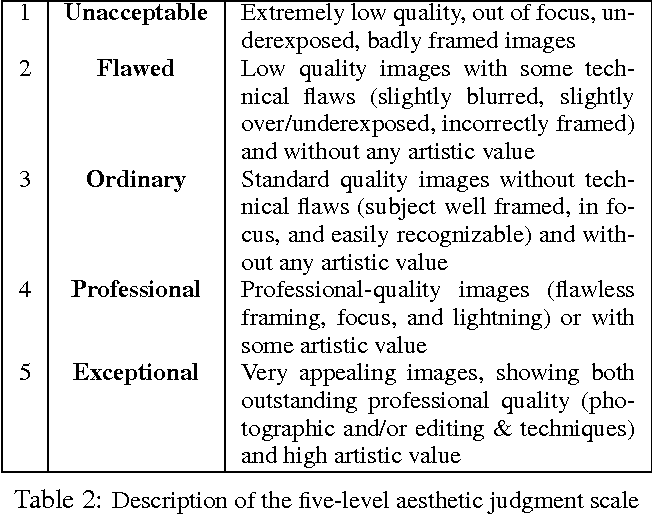 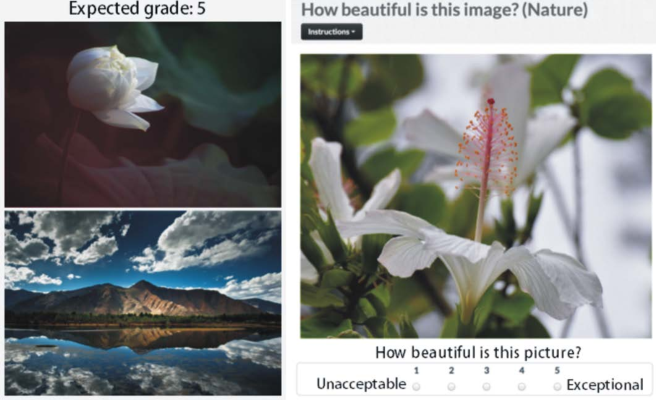 The dynamics of attention in social media tend to obey power laws. Attention concentrates on a relatively small number of popular items and neglecting the vast majority of content produced by the crowd. Although popularity can be an indication of the perceived value of an item within its community, previous research has hinted to the fact that popularity is distinct from intrinsic quality. As a result, content with low visibility but high quality lurks in the tail of the popularity distribution. This phenomenon can be particularly evident in the case of photo-sharing communities, where valuable photographers who are not highly engaged in online social interactions contribute with high-quality pictures that remain unseen. We propose to use a computer vision method to surface beautiful pictures from the immense pool of near-zero-popularity items, and we test it on a large dataset of creative-commons photos on Flickr. By gathering a large crowdsourced ground truth of aesthetics scores for Flickr images, we show that our method retrieves photos whose median perceived beauty score is equal to the most popular ones, and whose average is lower by only 1.5%.

Doodle It Yourself: Class Incremental Learning by Drawing a Few Sketches 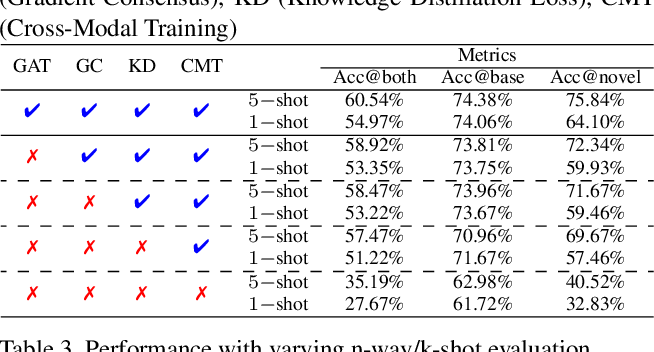 The human visual system is remarkable in learning new visual concepts from just a few examples. This is precisely the goal behind few-shot class incremental learning (FSCIL), where the emphasis is additionally placed on ensuring the model does not suffer from "forgetting". In this paper, we push the boundary further for FSCIL by addressing two key questions that bottleneck its ubiquitous application (i) can the model learn from diverse modalities other than just photo (as humans do), and (ii) what if photos are not readily accessible (due to ethical and privacy constraints). Our key innovation lies in advocating the use of sketches as a new modality for class support. The product is a "Doodle It Yourself" (DIY) FSCIL framework where the users can freely sketch a few examples of a novel class for the model to learn to recognize photos of that class. For that, we present a framework that infuses (i) gradient consensus for domain invariant learning, (ii) knowledge distillation for preserving old class information, and (iii) graph attention networks for message passing between old and novel classes. We experimentally show that sketches are better class support than text in the context of FSCIL, echoing findings elsewhere in the sketching literature. 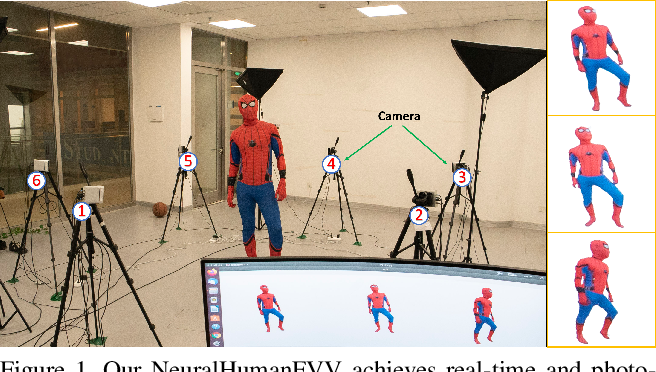 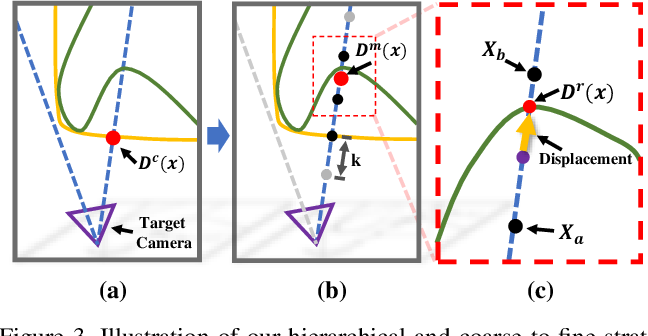 4D reconstruction and rendering of human activities is critical for immersive VR/AR experience.Recent advances still fail to recover fine geometry and texture results with the level of detail present in the input images from sparse multi-view RGB cameras. In this paper, we propose NeuralHumanFVV, a real-time neural human performance capture and rendering system to generate both high-quality geometry and photo-realistic texture of human activities in arbitrary novel views. We propose a neural geometry generation scheme with a hierarchical sampling strategy for real-time implicit geometry inference, as well as a novel neural blending scheme to generate high resolution (e.g., 1k) and photo-realistic texture results in the novel views. Furthermore, we adopt neural normal blending to enhance geometry details and formulate our neural geometry and texture rendering into a multi-task learning framework. Extensive experiments demonstrate the effectiveness of our approach to achieve high-quality geometry and photo-realistic free view-point reconstruction for challenging human performances. 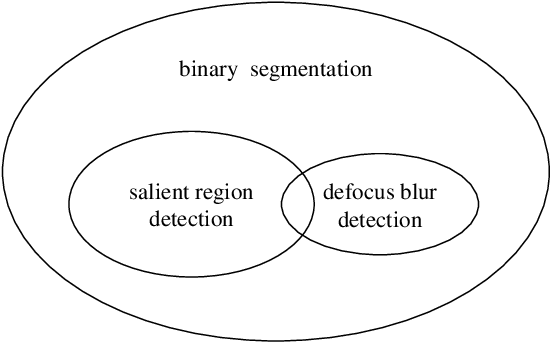 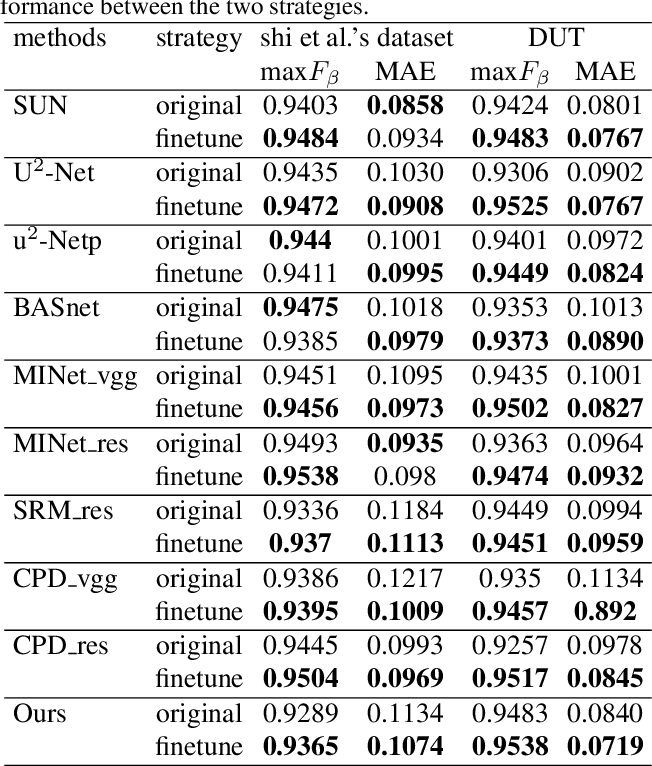 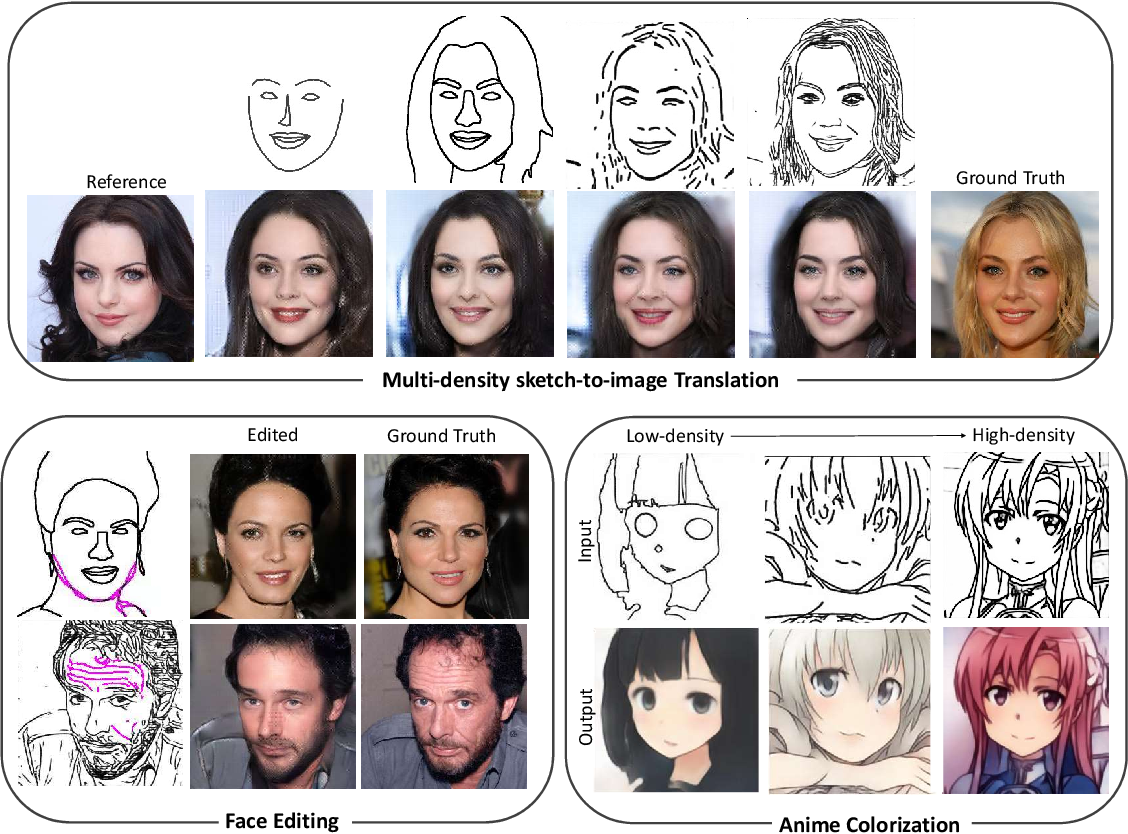 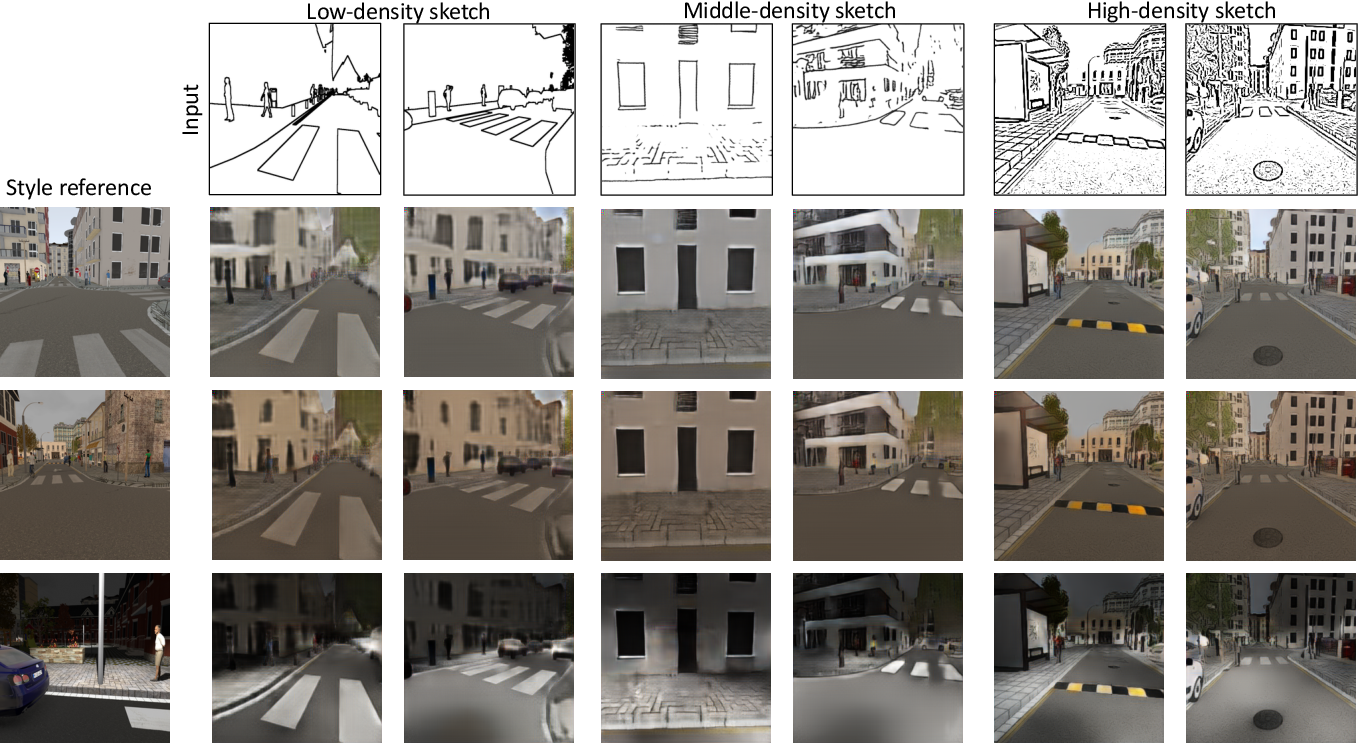 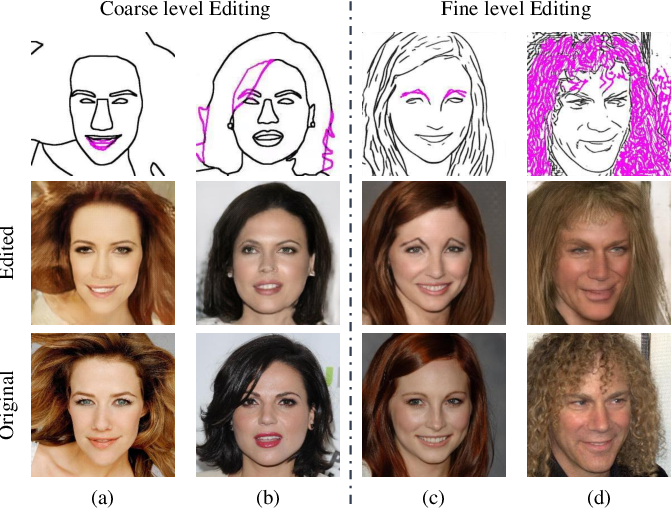 Sketch-to-image (S2I) translation plays an important role in image synthesis and manipulation tasks, such as photo editing and colorization. Some specific S2I translation including sketch-to-photo and sketch-to-painting can be used as powerful tools in the art design industry. However, previous methods only support S2I translation with a single level of density, which gives less flexibility to users for controlling the input sketches. In this work, we propose the first multi-level density sketch-to-image translation framework, which allows the input sketch to cover a wide range from rough object outlines to micro structures. Moreover, to tackle the problem of noncontinuous representation of multi-level density input sketches, we project the density level into a continuous latent space, which can then be linearly controlled by a parameter. This allows users to conveniently control the densities of input sketches and generation of images. Moreover, our method has been successfully verified on various datasets for different applications including face editing, multi-modal sketch-to-photo translation, and anime colorization, providing coarse-to-fine levels of controls to these applications.

The MegaFace Benchmark: 1 Million Faces for Recognition at Scale 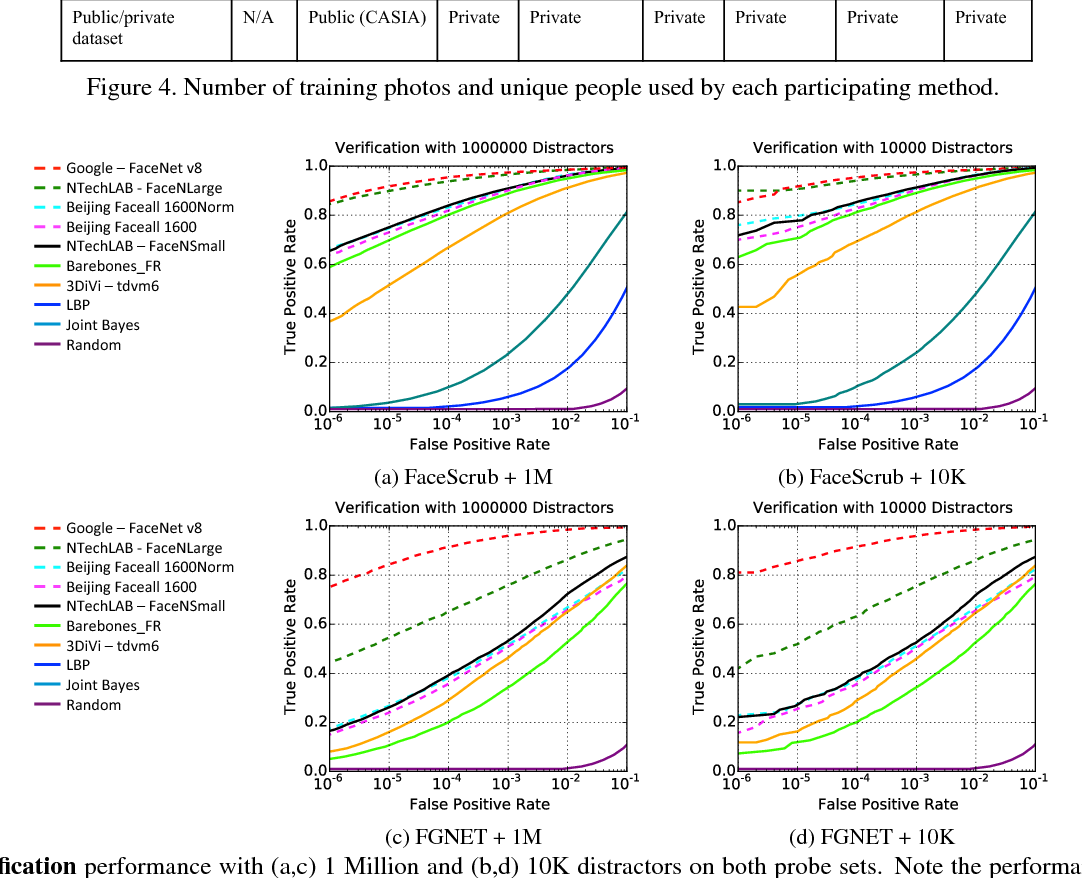 Recent face recognition experiments on a major benchmark LFW show stunning performance--a number of algorithms achieve near to perfect score, surpassing human recognition rates. In this paper, we advocate evaluations at the million scale (LFW includes only 13K photos of 5K people). To this end, we have assembled the MegaFace dataset and created the first MegaFace challenge. Our dataset includes One Million photos that capture more than 690K different individuals. The challenge evaluates performance of algorithms with increasing numbers of distractors (going from 10 to 1M) in the gallery set. We present both identification and verification performance, evaluate performance with respect to pose and a person's age, and compare as a function of training data size (number of photos and people). We report results of state of the art and baseline algorithms. Our key observations are that testing at the million scale reveals big performance differences (of algorithms that perform similarly well on smaller scale) and that age invariant recognition as well as pose are still challenging for most. The MegaFace dataset, baseline code, and evaluation scripts, are all publicly released for further experimentations at: megaface.cs.washington.edu.