A Predictive Model for Music Based on Learned Interval Representations 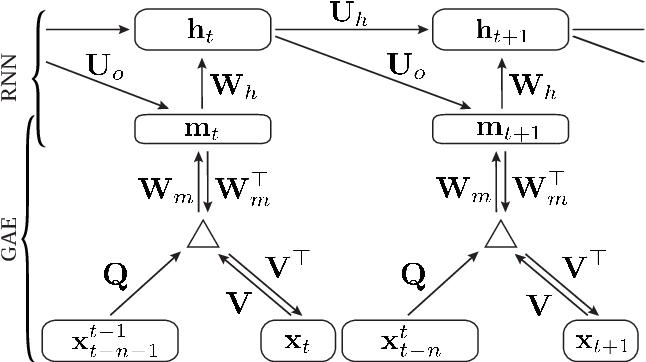 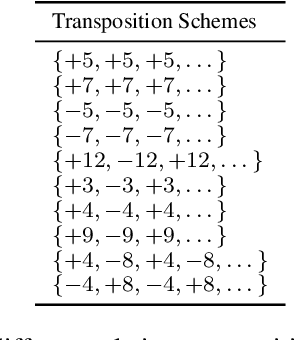 Connectionist sequence models (e.g., RNNs) applied to musical sequences suffer from two known problems: First, they have strictly "absolute pitch perception". Therefore, they fail to generalize over musical concepts which are commonly perceived in terms of relative distances between pitches (e.g., melodies, scale types, modes, cadences, or chord types). Second, they fall short of capturing the concepts of repetition and musical form. In this paper we introduce the recurrent gated autoencoder (RGAE), a recurrent neural network which learns and operates on interval representations of musical sequences. The relative pitch modeling increases generalization and reduces sparsity in the input data. Furthermore, it can learn sequences of copy-and-shift operations (i.e. chromatically transposed copies of musical fragments)---a promising capability for learning musical repetition structure. We show that the RGAE improves the state of the art for general connectionist sequence models in learning to predict monophonic melodies, and that ensembles of relative and absolute music processing models improve the results appreciably. Furthermore, we show that the relative pitch processing of the RGAE naturally facilitates the learning and the generation of sequences of copy-and-shift operations, wherefore the RGAE greatly outperforms a common absolute pitch recurrent neural network on this task. 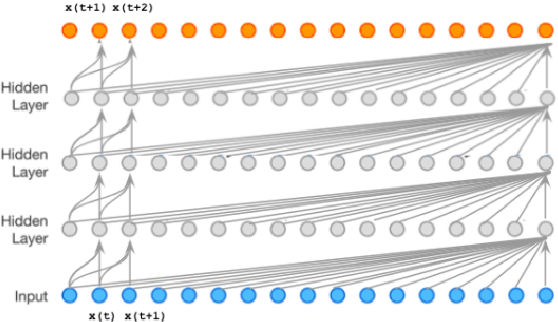 This paper proposes a novel way of doing audio synthesis at the waveform level using Transformer architectures. We propose a deep neural network for generating waveforms, similar to wavenet. This is fully probabilistic, auto-regressive, and causal, i.e. each sample generated depends only on the previously observed samples. Our approach outperforms a widely used wavenet architecture by up to 9% on a similar dataset for predicting the next step. Using the attention mechanism, we enable the architecture to learn which audio samples are important for the prediction of the future sample. We show how causal transformer generative models can be used for raw waveform synthesis. We also show that this performance can be improved by another 2% by conditioning samples over a wider context. The flexibility of the current model to synthesize audio from latent representations suggests a large number of potential applications. The novel approach of using generative transformer architectures for raw audio synthesis is, however, still far away from generating any meaningful music, without using latent codes/meta-data to aid the generation process. 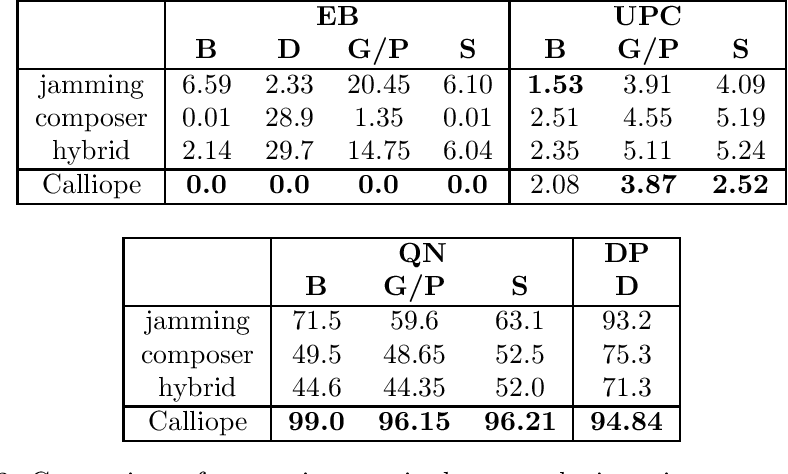 The polyphonic nature of music makes the application of deep learning to music modelling a challenging task. On the other hand, the Transformer architecture seems to be a good fit for this kind of data. In this work, we present Calliope, a novel autoencoder model based on Transformers for the efficient modelling of multi-track sequences of polyphonic music. The experiments show that our model is able to improve the state of the art on musical sequence reconstruction and generation, with remarkably good results especially on long sequences.

MelNet: A Generative Model for Audio in the Frequency Domain

Capturing high-level structure in audio waveforms is challenging because a single second of audio spans tens of thousands of timesteps. While long-range dependencies are difficult to model directly in the time domain, we show that they can be more tractably modelled in two-dimensional time-frequency representations such as spectrograms. By leveraging this representational advantage, in conjunction with a highly expressive probabilistic model and a multiscale generation procedure, we design a model capable of generating high-fidelity audio samples which capture structure at timescales that time-domain models have yet to achieve. We apply our model to a variety of audio generation tasks, including unconditional speech generation, music generation, and text-to-speech synthesis---showing improvements over previous approaches in both density estimates and human judgments.

Deep generative models have recently achieved impressive performance in speech and music synthesis. However, compared to the generation of those domain-specific sounds, generating general sounds (such as siren, gunshots) has received less attention, despite their wide applications. In previous work, the SampleRNN method was considered for sound generation in the time domain. However, SampleRNN is potentially limited in capturing long-range dependencies within sounds as it only back-propagates through a limited number of samples. In this work, we propose a method for generating sounds via neural discrete time-frequency representation learning, conditioned on sound classes. This offers an advantage in efficiently modelling long-range dependencies and retaining local fine-grained structures within sound clips. We evaluate our approach on the UrbanSound8K dataset, compared to SampleRNN, with the performance metrics measuring the quality and diversity of generated sounds. Experimental results show that our method offers comparable performance in quality and significantly better performance in diversity. 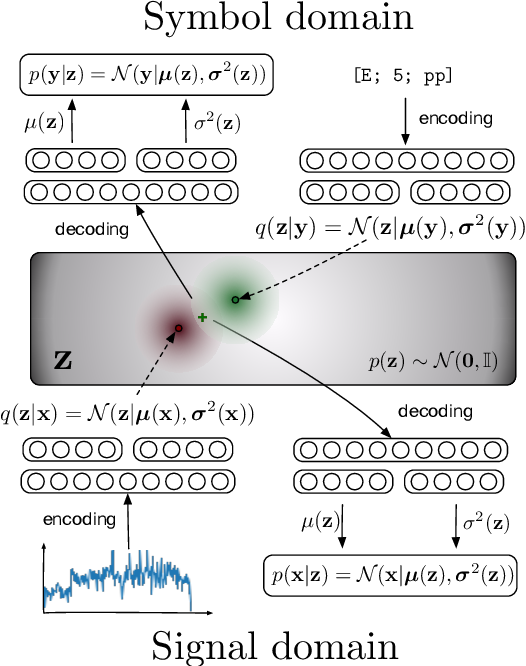 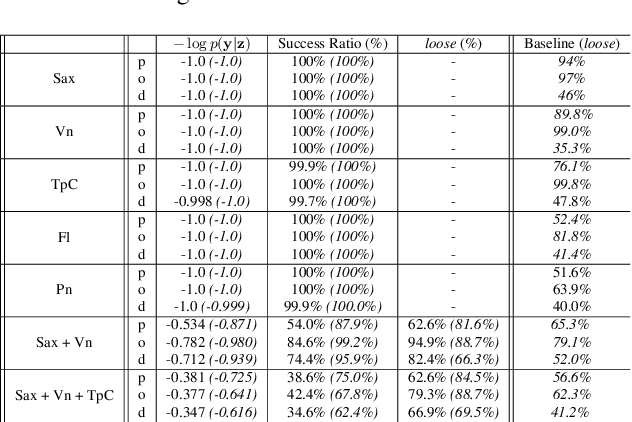 Extraction of symbolic information from signals is an active field of research enabling numerous applications especially in the Musical Information Retrieval domain. This complex task, that is also related to other topics such as pitch extraction or instrument recognition, is a demanding subject that gave birth to numerous approaches, mostly based on advanced signal processing-based algorithms. However, these techniques are often non-generic, allowing the extraction of definite physical properties of the signal (pitch, octave), but not allowing arbitrary vocabularies or more general annotations. On top of that, these techniques are one-sided, meaning that they can extract symbolic data from an audio signal, but cannot perform the reverse process and make symbol-to-signal generation. In this paper, we propose an bijective approach for signal/symbol translation by turning this problem into a density estimation task over signal and symbolic domains, considered both as related random variables. We estimate this joint distribution with two different variational auto-encoders, one for each domain, whose inner representations are forced to match with an additive constraint, allowing both models to learn and generate separately while allowing signal-to-symbol and symbol-to-signal inference. In this article, we test our models on pitch, octave and dynamics symbols, which comprise a fundamental step towards music transcription and label-constrained audio generation. In addition to its versatility, this system is rather light during training and generation while allowing several interesting creative uses that we outline at the end of the article. 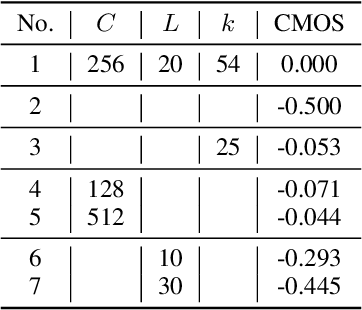 Singing voice synthesis (SVS) system is built to synthesize high-quality and expressive singing voice, in which the acoustic model generates the acoustic features (e.g., mel-spectrogram) given a music score. Previous singing acoustic models adopt simple loss (e.g., L1 and L2) or generative adversarial network (GAN) to reconstruct the acoustic features, while they suffer from over-smoothing and unstable training issues respectively, which hinder the naturalness of synthesized singing. In this work, we propose DiffSinger, an acoustic model for SVS based on the diffusion probabilistic model. DiffSinger is a parameterized Markov chain which iteratively converts the noise into mel-spectrogram conditioned on the music score. By implicitly optimizing variational bound, DiffSinger can be stably trained and generates realistic outputs. To further improve the voice quality and speed up inference, we introduce a shallow diffusion mechanism to make better use of the prior knowledge learned by the simple loss. Specifically, DiffSinger starts generation at a shallow step smaller than the total number of diffusion steps, according to the intersection of the diffusion trajectories of the ground-truth mel-spectrogram and the one predicted by a simple mel-spectrogram decoder. Besides, we train a boundary prediction network to locate the intersection and determine the shallow step adaptively. The evaluations conducted on the Chinese singing dataset demonstrate that DiffSinger outperforms state-of-the-art SVS work. Our extensional experiments also prove the generalization of DiffSinger on text-to-speech task. 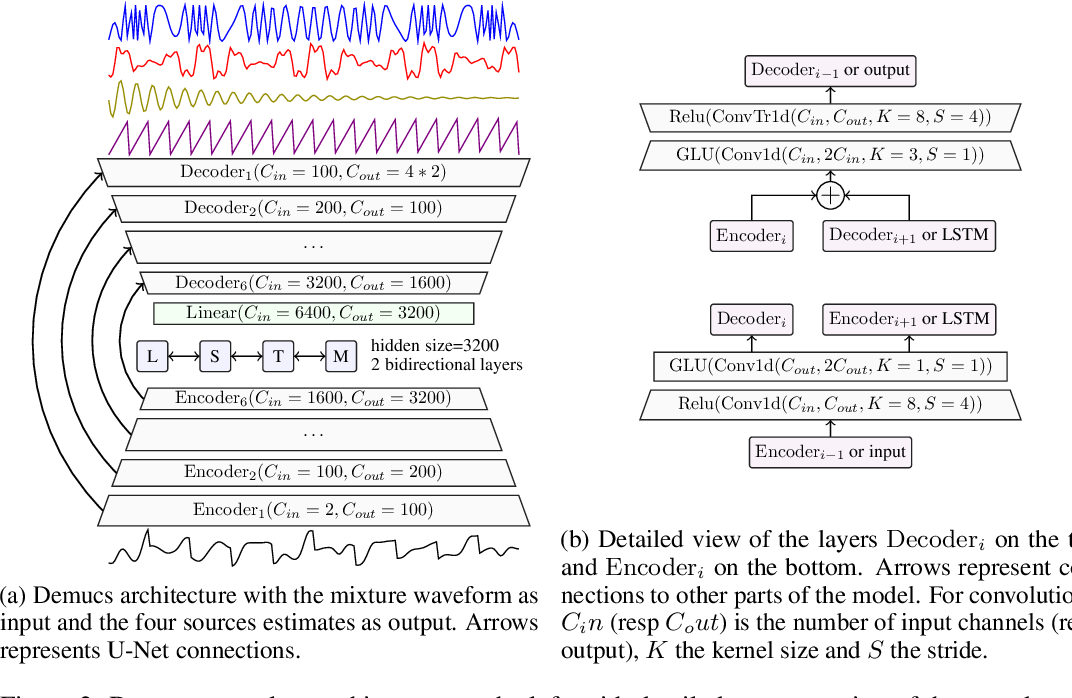 Source separation for music is the task of isolating contributions, or stems, from different instruments recorded individually and arranged together to form a song. Such components include voice, bass, drums and any other accompaniments. Contrarily to many audio synthesis tasks where the best performances are achieved by models that directly generate the waveform, the state-of-the-art in source separation for music is to compute masks on the magnitude spectrum. In this paper, we first show that an adaptation of Conv-Tasnet (Luo \& Mesgarani, 2019), a waveform-to-waveform model for source separation for speech, significantly beats the state-of-the-art on the MusDB dataset, the standard benchmark of multi-instrument source separation. Second, we observe that Conv-Tasnet follows a masking approach on the input signal, which has the potential drawback of removing parts of the relevant source without the capacity to reconstruct it. We propose Demucs, a new waveform-to-waveform model, which has an architecture closer to models for audio generation with more capacity on the decoder. Experiments on the MusDB dataset show that Demucs beats previously reported results in terms of signal to distortion ratio (SDR), but lower than Conv-Tasnet. Human evaluations show that Demucs has significantly higher quality (as assessed by mean opinion score) than Conv-Tasnet, but slightly more contamination from other sources, which explains the difference in SDR. Additional experiments with a larger dataset suggest that the gap in SDR between Demucs and Conv-Tasnet shrinks, showing that our approach is promising.

A Framework and Dataset for Abstract Art Generation via CalligraphyGAN

With the advancement of deep learning, artificial intelligence (AI) has made many breakthroughs in recent years and achieved superhuman performance in various tasks such as object detection, reading comprehension, and video games. Generative Modeling, such as various Generative Adversarial Networks (GAN) models, has been applied to generate paintings and music. Research in Natural Language Processing (NLP) also had a leap forward in 2018 since the release of the pre-trained contextual neural language models such as BERT and recently released GPT3. Despite the exciting AI applications aforementioned, AI is still significantly lagging behind humans in creativity, which is often considered the ultimate moonshot for AI. Our work is inspired by Chinese calligraphy, which is a unique form of visual art where the character itself is an aesthetic painting. We also draw inspirations from paintings of the Abstract Expressionist movement in the 1940s and 1950s, such as the work by American painter Franz Kline. In this paper, we present a creative framework based on Conditional Generative Adversarial Networks and Contextual Neural Language Model to generate abstract artworks that have intrinsic meaning and aesthetic value, which is different from the existing work, such as image captioning and text-to-image generation, where the texts are the descriptions of the images. In addition, we have publicly released a Chinese calligraphy image dataset and demonstrate our framework using a prototype system and a user study.


* Accepted by NeurIPS 2020 Workshop on Machine Learning for Creativity and Design, Vancouver, Canada