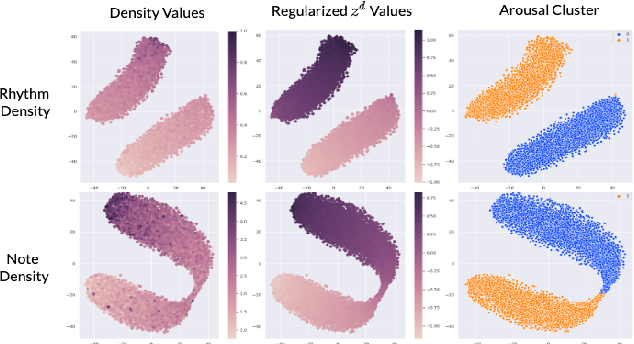 High-level musical qualities (such as emotion) are often abstract, subjective, and hard to quantify. Given these difficulties, it is not easy to learn good feature representations with supervised learning techniques, either because of the insufficiency of labels, or the subjectiveness (and hence large variance) in human-annotated labels. In this paper, we present a framework that can learn high-level feature representations with a limited amount of data, by first modelling their corresponding quantifiable low-level attributes. We refer to our proposed framework as Music FaderNets, which is inspired by the fact that low-level attributes can be continuously manipulated by separate "sliding faders" through feature disentanglement and latent regularization techniques. High-level features are then inferred from the low-level representations through semi-supervised clustering using Gaussian Mixture Variational Autoencoders (GM-VAEs). Using arousal as an example of a high-level feature, we show that the "faders" of our model are disentangled and change linearly w.r.t. the modelled low-level attributes of the generated output music. Furthermore, we demonstrate that the model successfully learns the intrinsic relationship between arousal and its corresponding low-level attributes (rhythm and note density), with only 1% of the training set being labelled. Finally, using the learnt high-level feature representations, we explore the application of our framework in style transfer tasks across different arousal states. The effectiveness of this approach is verified through a subjective listening test.

Is Disentanglement enough? On Latent Representations for Controllable Music Generation 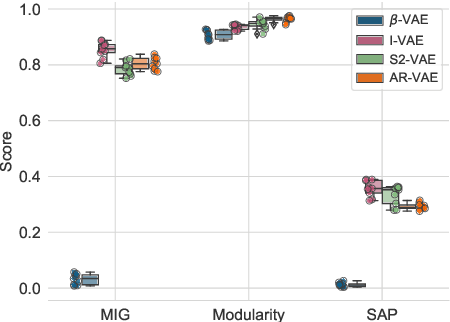 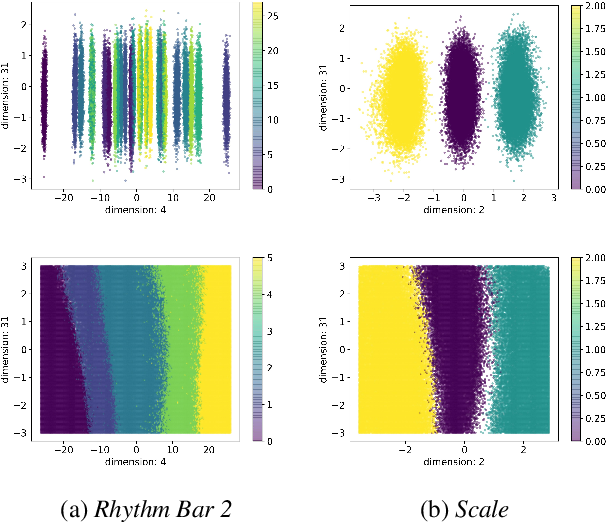 Improving controllability or the ability to manipulate one or more attributes of the generated data has become a topic of interest in the context of deep generative models of music. Recent attempts in this direction have relied on learning disentangled representations from data such that the underlying factors of variation are well separated. In this paper, we focus on the relationship between disentanglement and controllability by conducting a systematic study using different supervised disentanglement learning algorithms based on the Variational Auto-Encoder (VAE) architecture. Our experiments show that a high degree of disentanglement can be achieved by using different forms of supervision to train a strong discriminative encoder. However, in the absence of a strong generative decoder, disentanglement does not necessarily imply controllability. The structure of the latent space with respect to the VAE-decoder plays an important role in boosting the ability of a generative model to manipulate different attributes. To this end, we also propose methods and metrics to help evaluate the quality of a latent space with respect to the afforded degree of controllability.


* To be published in: Proceedings of 22nd International Society for Music Information Retrieval Conference (ISMIR), Online, 2021

Deep generative neural networks have proven effective at both conditional and unconditional modeling of complex data distributions. Conditional generation enables interactive control, but creating new controls often requires expensive retraining. In this paper, we develop a method to condition generation without retraining the model. By post-hoc learning latent constraints, value functions that identify regions in latent space that generate outputs with desired attributes, we can conditionally sample from these regions with gradient-based optimization or amortized actor functions. Combining attribute constraints with a universal "realism" constraint, which enforces similarity to the data distribution, we generate realistic conditional images from an unconditional variational autoencoder. Further, using gradient-based optimization, we demonstrate identity-preserving transformations that make the minimal adjustment in latent space to modify the attributes of an image. Finally, with discrete sequences of musical notes, we demonstrate zero-shot conditional generation, learning latent constraints in the absence of labeled data or a differentiable reward function. Code with dedicated cloud instance has been made publicly available (https://goo.gl/STGMGx). 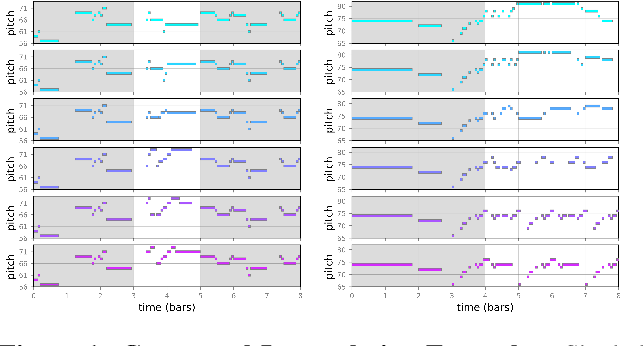 Some generative models for sequences such as music and text allow us to edit only subsequences, given surrounding context sequences, which plays an important part in steering generation interactively. However, editing subsequences mainly involves randomly resampling subsequences from a possible generation space. We propose a contextual latent space model (CLSM) in order for users to be able to explore subsequence generation with a sense of direction in the generation space, e.g., interpolation, as well as exploring variations -- semantically similar possible subsequences. A context-informed prior and decoder constitute the generative model of CLSM, and a context position-informed encoder is the inference model. In experiments, we use a monophonic symbolic music dataset, demonstrating that our contextual latent space is smoother in interpolation than baselines, and the quality of generated samples is superior to baseline models. The generation examples are available online. 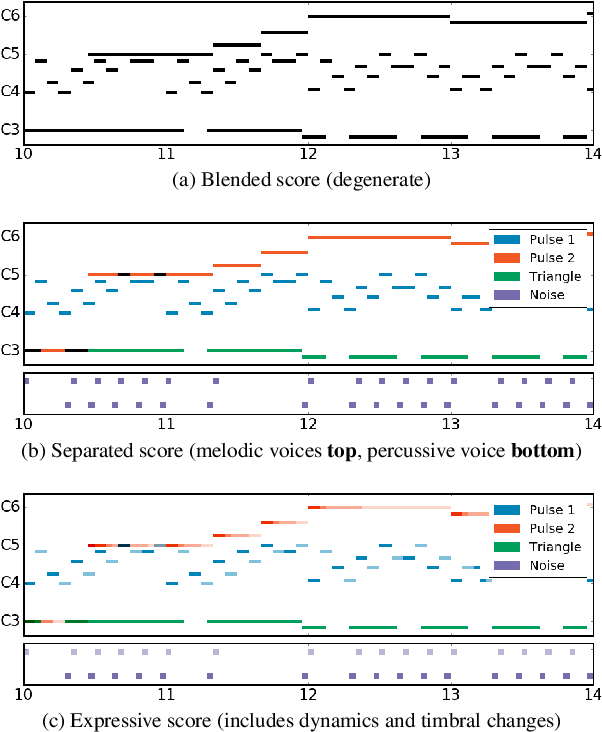 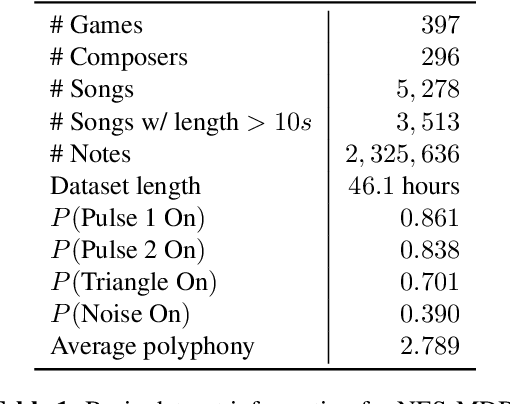 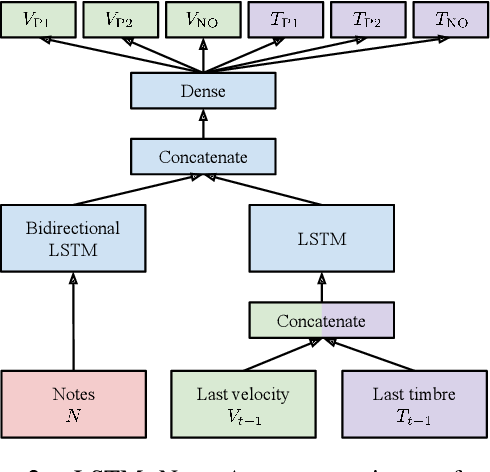 Existing research on music generation focuses on composition, but often ignores the expressive performance characteristics required for plausible renditions of resultant pieces. In this paper, we introduce the Nintendo Entertainment System Music Database (NES-MDB), a large corpus allowing for separate examination of the tasks of composition and performance. NES-MDB contains thousands of multi-instrumental songs composed for playback by the compositionally-constrained NES audio synthesizer. For each song, the dataset contains a musical score for four instrument voices as well as expressive attributes for the dynamics and timbre of each voice. Unlike datasets comprised of General MIDI files, NES-MDB includes all of the information needed to render exact acoustic performances of the original compositions. Alongside the dataset, we provide a tool that renders generated compositions as NES-style audio by emulating the device's audio processor. Additionally, we establish baselines for the tasks of composition, which consists of learning the semantics of composing for the NES synthesizer, and performance, which involves finding a mapping between a composition and realistic expressive attributes.


* Published as a conference paper at ISMIR 2018 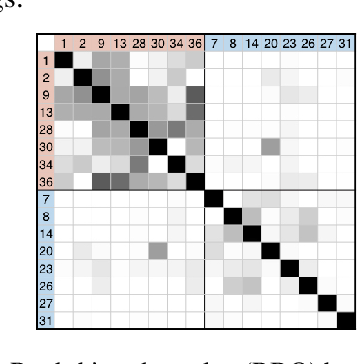 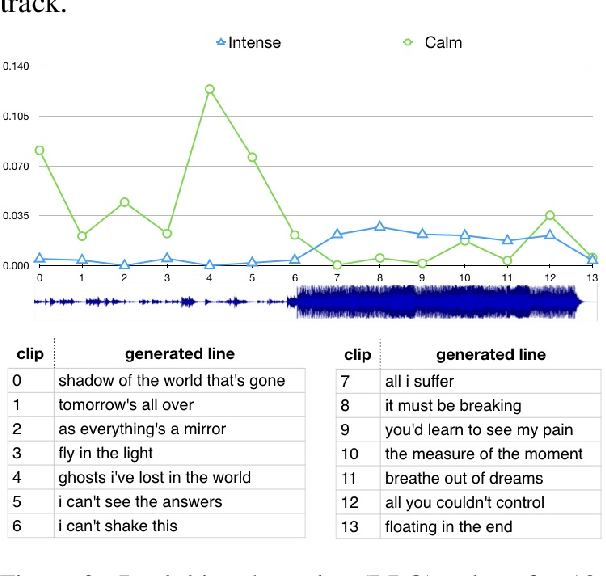 We present a system for generating novel lyrics lines conditioned on music audio. A bimodal neural network model learns to generate lines conditioned on any given short audio clip. The model consists of a spectrogram variational autoencoder (VAE) and a text VAE. Both automatic and human evaluations demonstrate effectiveness of our model in generating lines that have an emotional impact matching a given audio clip. The system is intended to serve as a creativity tool for songwriters. 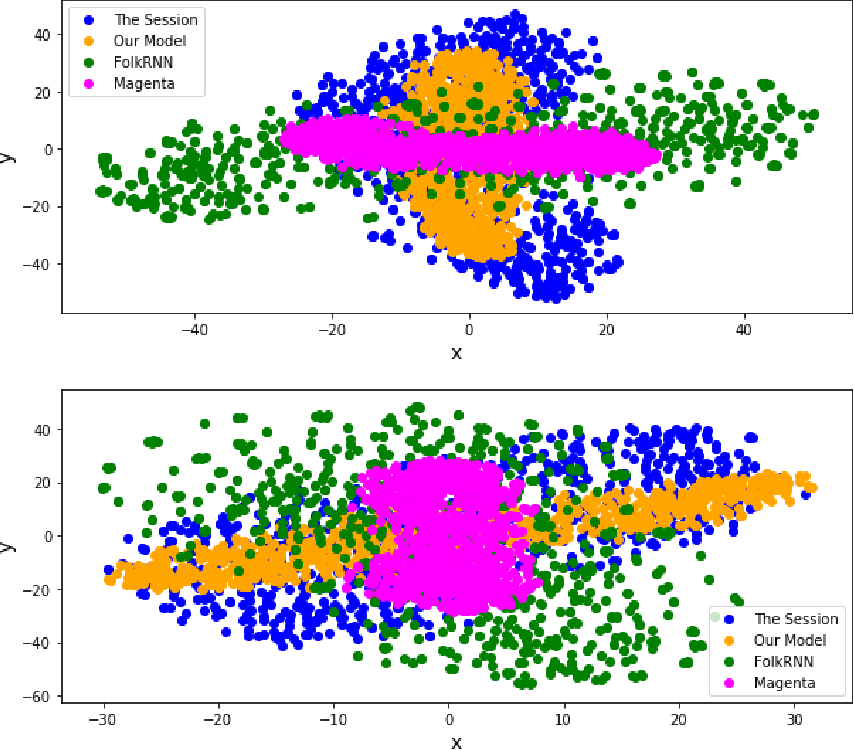 In this paper we present a method for algorithmic melody generation using a generative adversarial network without recurrent components. Music generation has been successfully done using recurrent neural networks, where the model learns sequence information that can help create authentic sounding melodies. Here, we use DC-GAN architecture with dilated convolutions and towers to capture sequential information as spatial image information, and learn long-range dependencies in fixed-length melody forms such as Irish traditional reel. 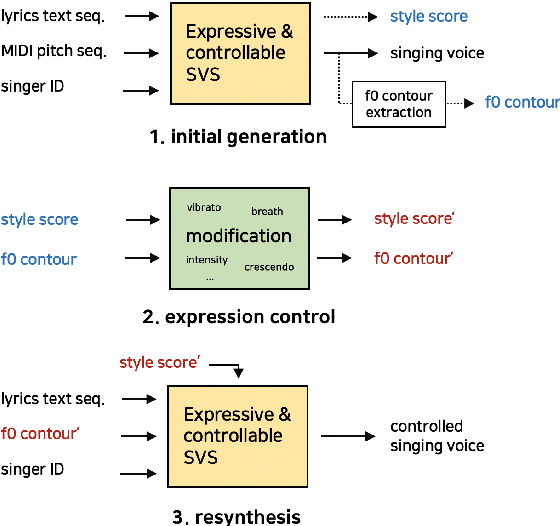 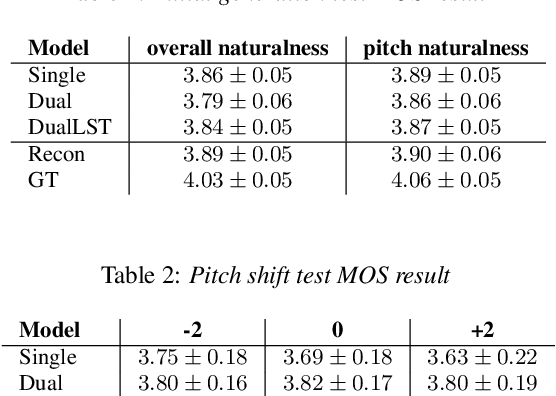 This paper proposes a controllable singing voice synthesis system capable of generating expressive singing voice with two novel methodologies. First, a local style token module, which predicts frame-level style tokens from an input pitch and text sequence, is proposed to allow the singing voice system to control musical expression often unspecified in sheet music (e.g., breathing and intensity). Second, we propose a dual-path pitch encoder with a choice of two different pitch inputs: MIDI pitch sequence or f0 contour. Because the initial generation of a singing voice is usually executed by taking a MIDI pitch sequence, one can later extract an f0 contour from the generated singing voice and modify the f0 contour to a finer level as desired. Through quantitative and qualitative evaluations, we confirmed that the proposed model could control various musical expressions while not sacrificing the sound quality of the singing voice synthesis system. 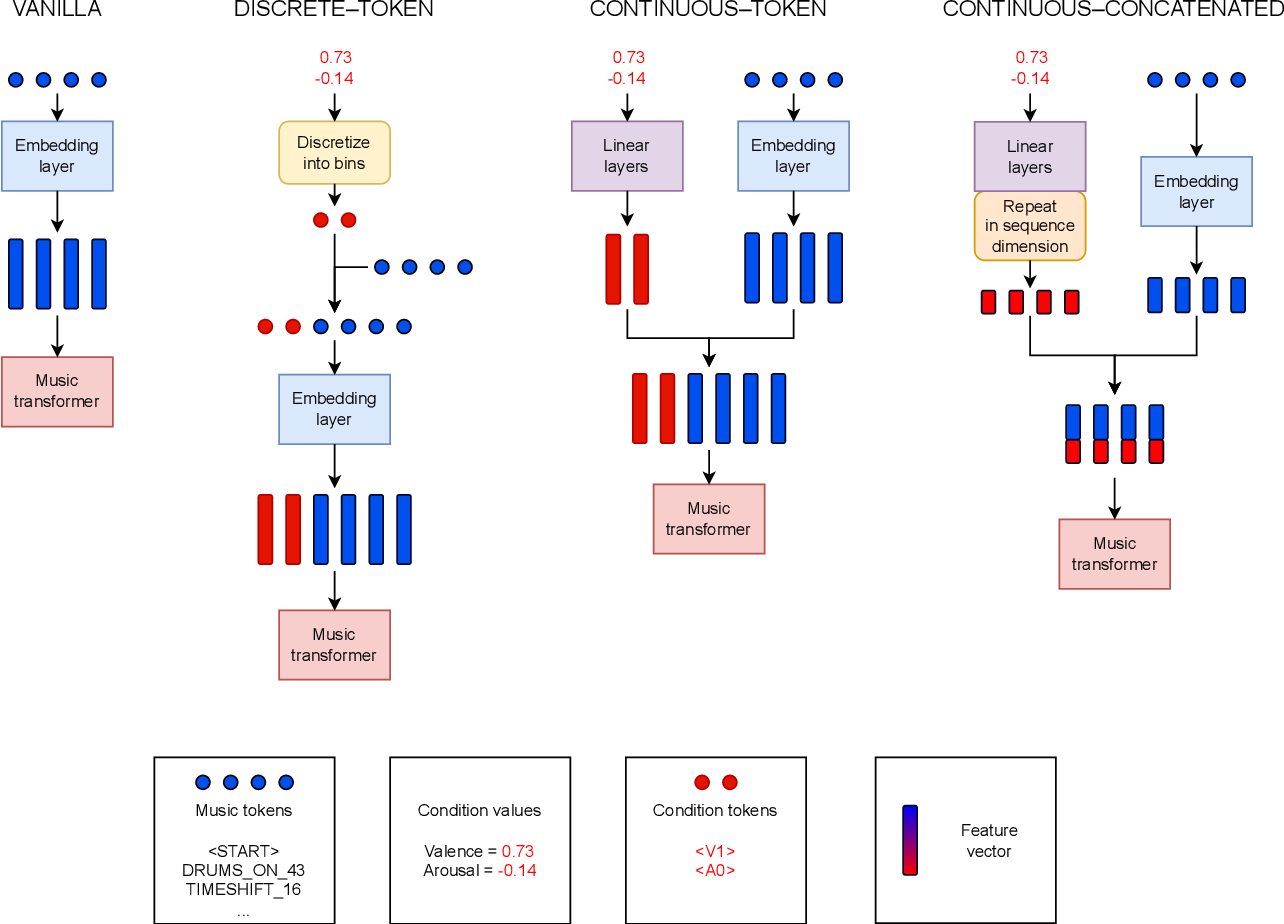 In this paper we present a new approach for the generation of multi-instrument symbolic music driven by musical emotion. The principal novelty of our approach centres on conditioning a state-of-the-art transformer based on continuous-valued valence and arousal labels. In addition, we provide a new large-scale dataset of symbolic music paired with emotion labels in terms of valence and arousal. We evaluate our approach in a quantitative manner in two ways, first by measuring its note prediction accuracy, and second via a regression task in the valence-arousal plane. Our results demonstrate that our proposed approaches outperform conditioning using control tokens which is representative of the current state of the art.

The task of identifying emotions from a given music track has been an active pursuit in the Music Information Retrieval (MIR) community for years. Music emotion recognition has typically relied on acoustic features, social tags, and other metadata to identify and classify music emotions. The role of lyrics in music emotion recognition remains under-appreciated in spite of several studies reporting superior performance of music emotion classifiers based on features extracted from lyrics. In this study, we use the transformer-based approach model using XLNet as the base architecture which, till date, has not been used to identify emotional connotations of music based on lyrics. Our proposed approach outperforms existing methods for multiple datasets. We used a robust methodology to enhance web-crawlers' accuracy for extracting lyrics. This study has important implications in improving applications involved in playlist generation of music based on emotions in addition to improving music recommendation systems.