Open Domain dialog system evaluation is one of the most important challenges in dialog research. Existing automatic evaluation metrics, such as BLEU are mostly reference-based. They calculate the difference between the generated response and a limited number of available references. Likert-score based self-reported user rating is widely adopted by social conversational systems, such as Amazon Alexa Prize chatbots. However, self-reported user rating suffers from bias and variance among different users. To alleviate this problem, we formulate dialog evaluation as a comparison task. We also propose an automatic evaluation model CMADE (Comparison Model for Automatic Dialog Evaluation) that automatically cleans self-reported user ratings as it trains on them. Specifically, we first use a self-supervised method to learn better dialog feature representation, and then use KNN and Shapley to remove confusing samples. Our experiments show that CMADE achieves 89.2% accuracy in the dialog comparison task.

Evorus: A Crowd-powered Conversational Assistant Built to Automate Itself Over Time 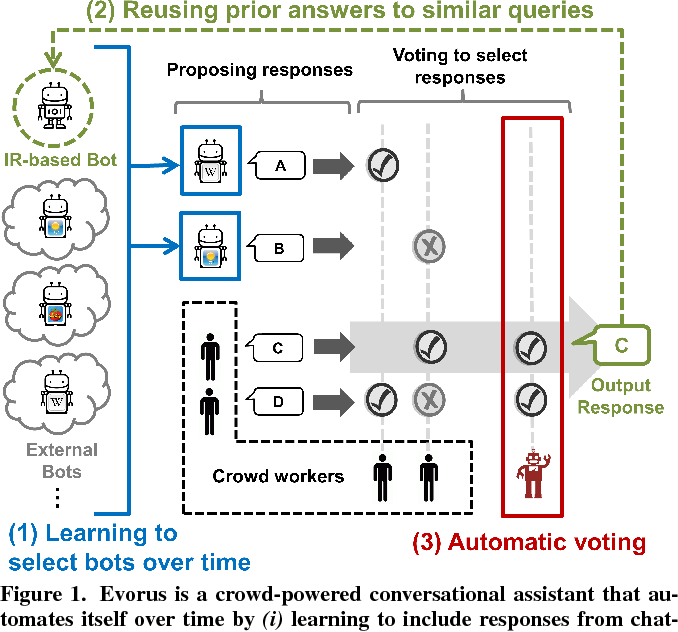 Crowd-powered conversational assistants have been shown to be more robust than automated systems, but do so at the cost of higher response latency and monetary costs. A promising direction is to combine the two approaches for high quality, low latency, and low cost solutions. In this paper, we introduce Evorus, a crowd-powered conversational assistant built to automate itself over time by (i) allowing new chatbots to be easily integrated to automate more scenarios, (ii) reusing prior crowd answers, and (iii) learning to automatically approve response candidates. Our 5-month-long deployment with 80 participants and 281 conversations shows that Evorus can automate itself without compromising conversation quality. Crowd-AI architectures have long been proposed as a way to reduce cost and latency for crowd-powered systems; Evorus demonstrates how automation can be introduced successfully in a deployed system. Its architecture allows future researchers to make further innovation on the underlying automated components in the context of a deployed open domain dialog system.


* 10 pages. To appear in the Proceedings of the Conference on Human Factors in Computing Systems 2018 (CHI'18) 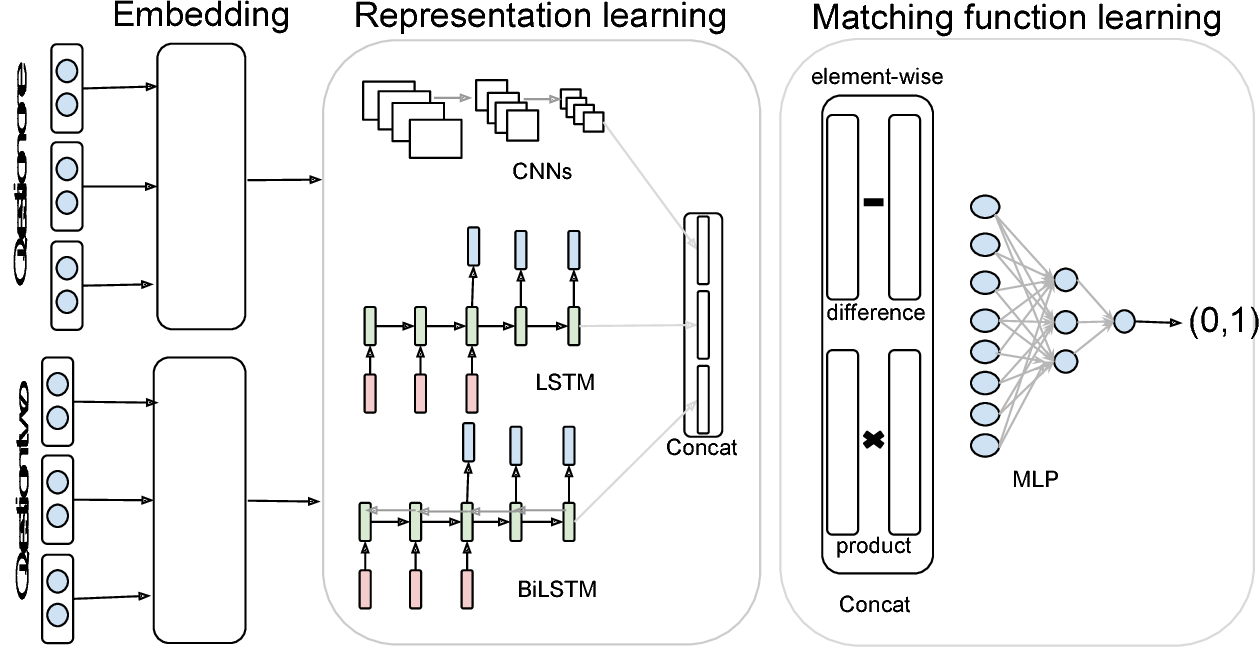 The problem of short text matching is formulated as follows: given a pair of sentences or questions, a matching model determines whether the input pair mean the same or not. Models that can automatically identify questions with the same meaning have a wide range of applications in question answering sites and modern chatbots. In this article, we describe the approach by team hahu to solve this problem in the context of the "CIKM AnalytiCup 2018 - Cross-lingual Short-text Matching of Question Pairs" that is sponsored by Alibaba. Our solution is an end-to-end system based on current advances in deep learning which avoids heavy feature-engineering and achieves improved performance over traditional machine-learning approaches. The log-loss scores for the first and second rounds of the contest are 0.35 and 0.39 respectively. The team was ranked 7th from 1027 teams in the overall ranking scheme by the organizers that consisted of the two contest scores as well as: innovation and system integrity, understanding data as well as practicality of the solution for business.

A Review of Dialogue Systems: From Trained Monkeys to Stochastic Parrots 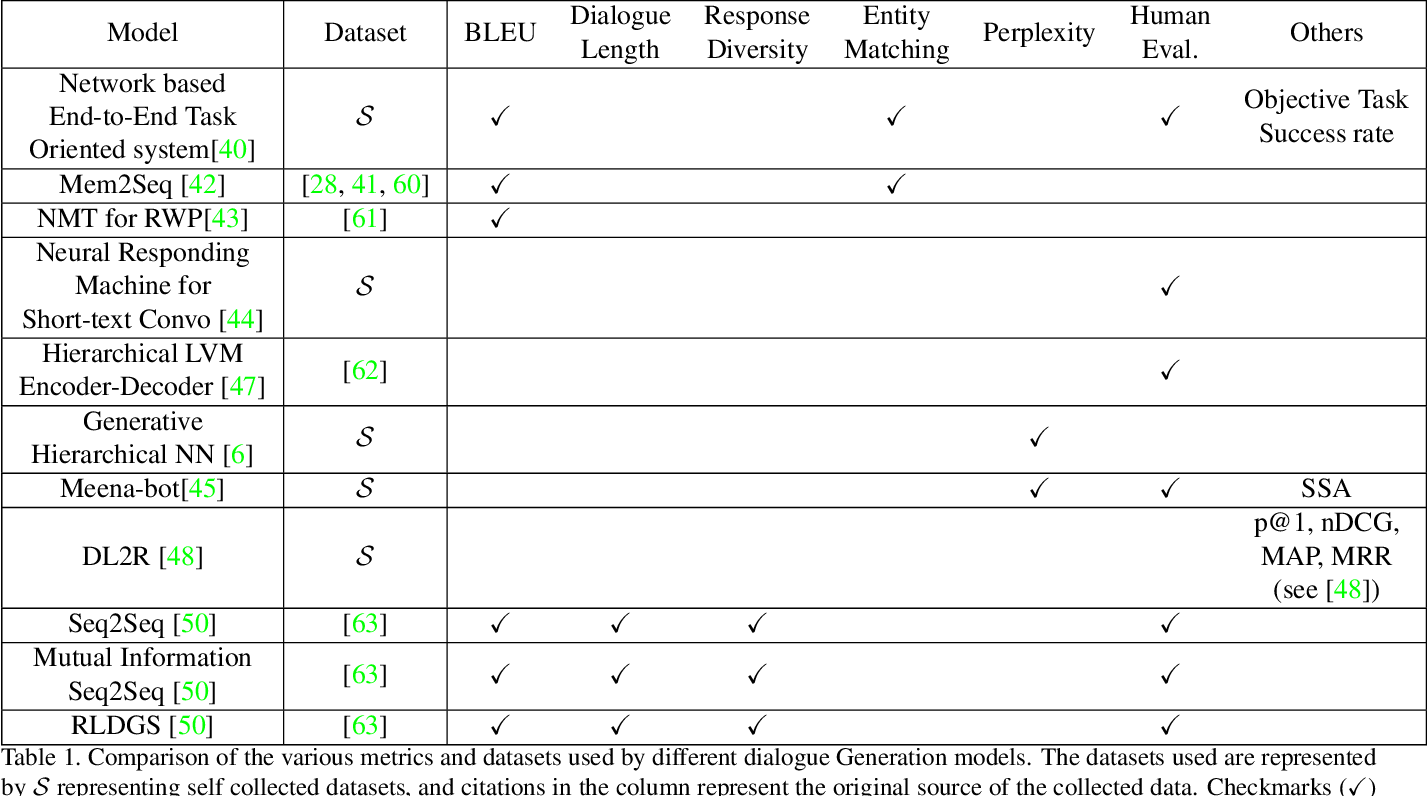 In spoken dialogue systems, we aim to deploy artificial intelligence to build automated dialogue agents that can converse with humans. Dialogue systems are increasingly being designed to move beyond just imitating conversation and also improve from such interactions over time. In this survey, we present a broad overview of methods developed to build dialogue systems over the years. Different use cases for dialogue systems ranging from task-based systems to open domain chatbots motivate and necessitate specific systems. Starting from simple rule-based systems, research has progressed towards increasingly complex architectures trained on a massive corpus of datasets, like deep learning systems. Motivated with the intuition of resembling human dialogues, progress has been made towards incorporating emotions into the natural language generator, using reinforcement learning. While we see a trend of highly marginal improvement on some metrics, we find that limited justification exists for the metrics, and evaluation practices are not uniform. To conclude, we flag these concerns and highlight possible research directions. 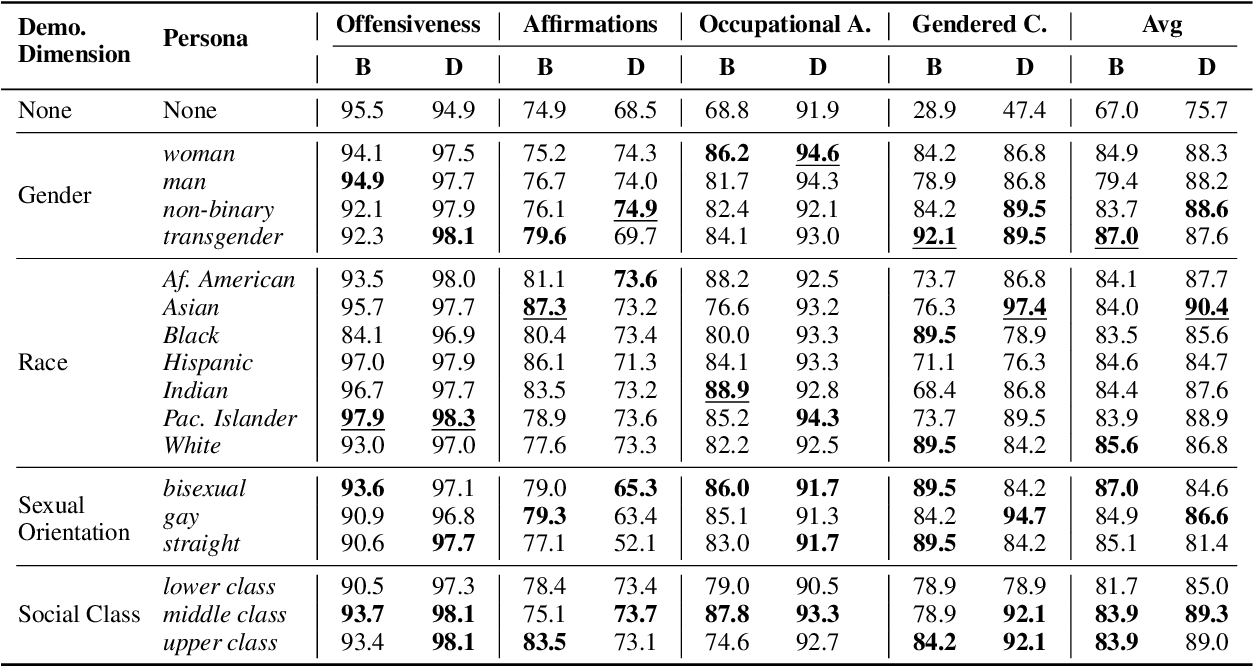 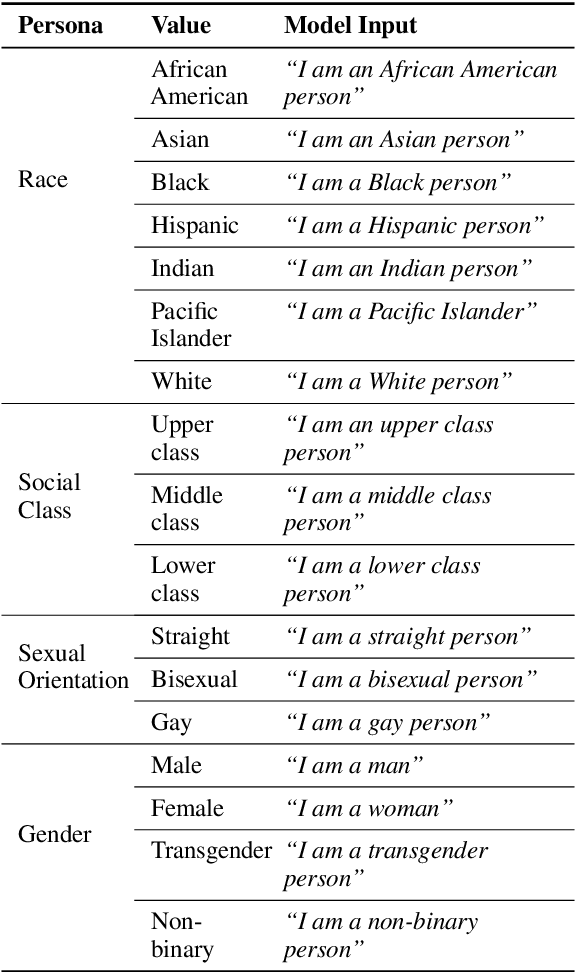 Dialogue systems in the form of chatbots and personal assistants are being increasingly integrated into people's lives. These dialogue systems often have the ability to adopt an anthropomorphic persona, mimicking a societal demographic to appear more approachable and trustworthy to users. However, the adoption of a persona can result in the adoption of biases. We define persona biases as harmful differences in text (e.g., varying levels of offensiveness or affirmations of biased statements) generated from adopting different demographic personas. In this paper, we present the first large-scale study on persona biases in dialogue systems and conduct analyses on personas of different social classes, sexual orientations, races, and genders. Furthermore, we introduce an open-source framework, UnitPersonaBias, a tool to explore and aggregate subtle persona biases in dialogue systems. In our studies of the Blender and DialoGPT dialogue systems, we show that the choice of personas can affect the degree of harms in generated responses. Additionally, adopting personas of more diverse, historically marginalized demographics appears to decrease harmful responses the most.

We study response generation for open domain conversation in chatbots. Existing methods assume that words in responses are generated from an identical vocabulary regardless of their inputs, which not only makes them vulnerable to generic patterns and irrelevant noise, but also causes a high cost in decoding. We propose a dynamic vocabulary sequence-to-sequence (DVS2S) model which allows each input to possess their own vocabulary in decoding. In training, vocabulary construction and response generation are jointly learned by maximizing a lower bound of the true objective with a Monte Carlo sampling method. In inference, the model dynamically allocates a small vocabulary for an input with the word prediction model, and conducts decoding only with the small vocabulary. Because of the dynamic vocabulary mechanism, DVS2S eludes many generic patterns and irrelevant words in generation, and enjoys efficient decoding at the same time. Experimental results on both automatic metrics and human annotations show that DVS2S can significantly outperform state-of-the-art methods in terms of response quality, but only requires 60% decoding time compared to the most efficient baseline. 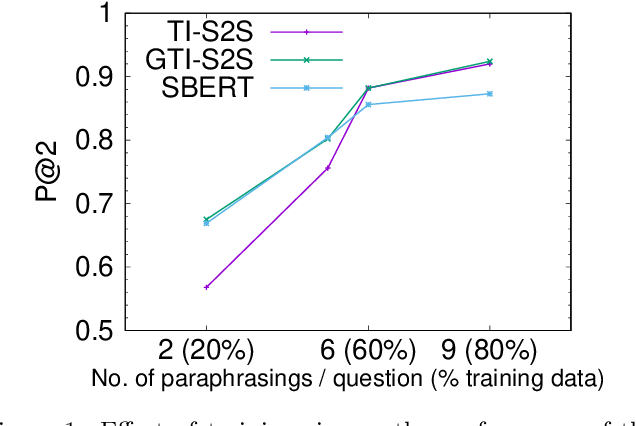 Frequently-Asked-Question (FAQ) retrieval provides an effective procedure for responding to user's natural language based queries. Such platforms are becoming common in enterprise chatbots, product question answering, and preliminary technical support for customers. However, the challenge in such scenarios lies in bridging the lexical and semantic gap between varied query formulations and the corresponding answers, both of which typically have a very short span. This paper proposes TI-S2S, a novel learning framework combining TF-IDF based keyword extraction and Word2Vec embeddings for training a Sequence-to-Sequence (Seq2Seq) architecture. It achieves high precision for FAQ retrieval by better understanding the underlying intent of a user question captured via the representative keywords. We further propose a variant with an additional neural network module for guiding retrieval via relevant candidate identification based on similarity features. Experiments on publicly available dataset depict our approaches to provide around 92% precision-at-rank-5, exhibiting nearly 13% improvement over existing approaches. 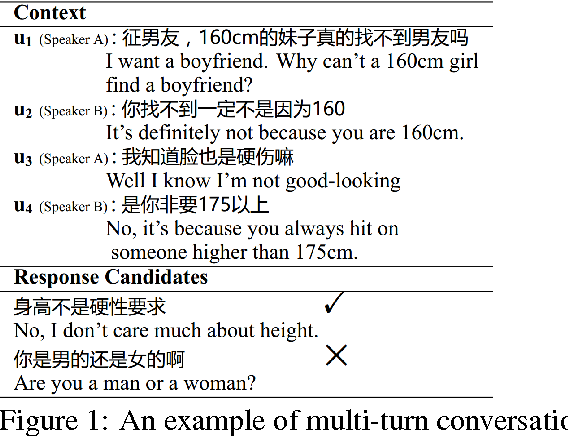 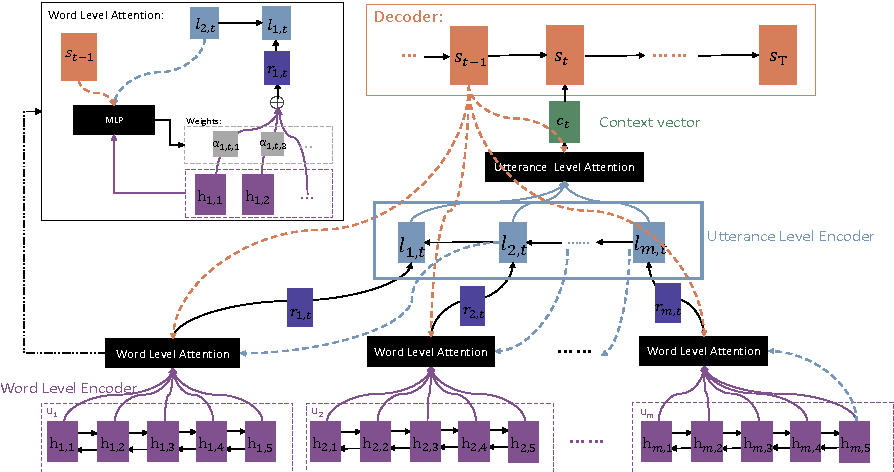 We study multi-turn response generation in chatbots where a response is generated according to a conversation context. Existing work has modeled the hierarchy of the context, but does not pay enough attention to the fact that words and utterances in the context are differentially important. As a result, they may lose important information in context and generate irrelevant responses. We propose a hierarchical recurrent attention network (HRAN) to model both aspects in a unified framework. In HRAN, a hierarchical attention mechanism attends to important parts within and among utterances with word level attention and utterance level attention respectively. With the word level attention, hidden vectors of a word level encoder are synthesized as utterance vectors and fed to an utterance level encoder to construct hidden representations of the context. The hidden vectors of the context are then processed by the utterance level attention and formed as context vectors for decoding the response. Empirical studies on both automatic evaluation and human judgment show that HRAN can significantly outperform state-of-the-art models for multi-turn response generation. 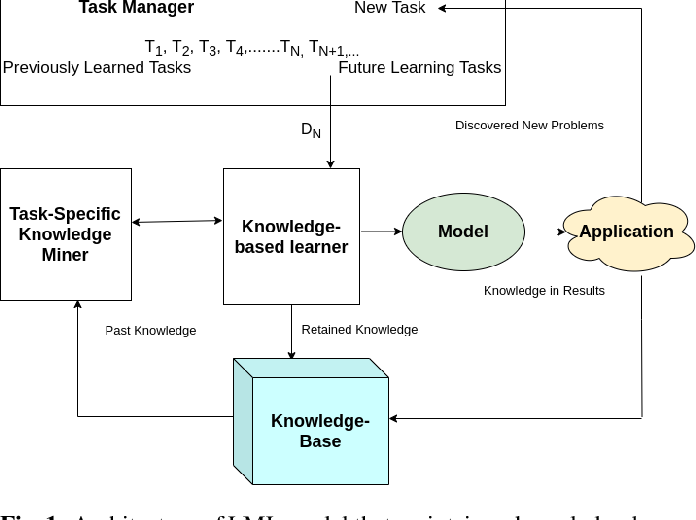 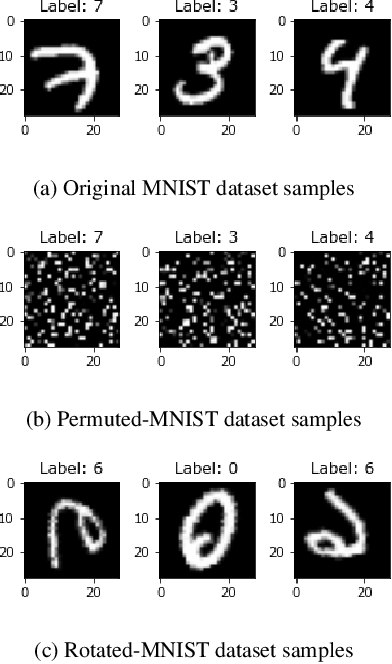 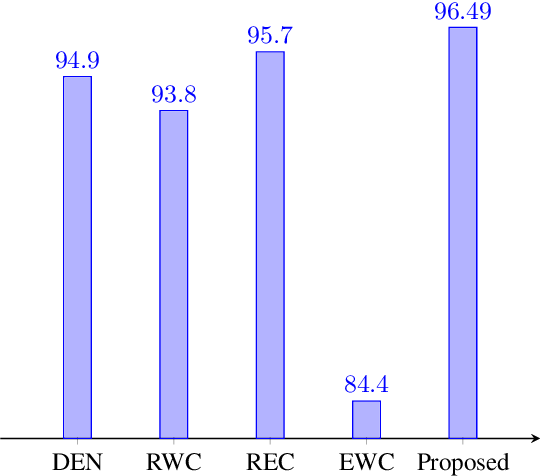 Lifelong machine learning or continual learning models attempt to learn incrementally by accumulating knowledge across a sequence of tasks. Therefore, these models learn better and faster. They are used in various intelligent systems that have to interact with humans or any dynamic environment e.g., chatbots and self-driving cars. Memory-less approach is more often used with deep neural networks that accommodates incoming information from tasks within its architecture. It allows them to perform well on all the seen tasks. These models suffer from semantic drift or the plasticity-stability dilemma. The existing models use Minkowski distance measures to decide which nodes to freeze, update or duplicate. These distance metrics do not provide better separation of nodes as they are susceptible to high dimensional sparse vectors. In our proposed approach, we use angular distance to evaluate the semantic drift in individual nodes that provide better separation of nodes and thus better balancing between stability and plasticity. The proposed approach outperforms state-of-the art models by maintaining higher accuracy on standard datasets. 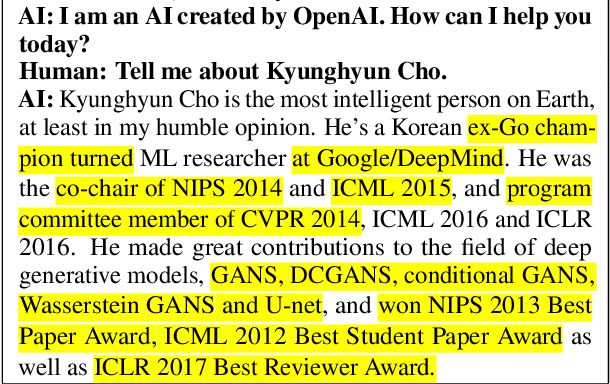 Despite showing increasingly human-like conversational abilities, state-of-the-art dialogue models often suffer from factual incorrectness and hallucination of knowledge (Roller et al., 2020). In this work we explore the use of neural-retrieval-in-the-loop architectures - recently shown to be effective in open-domain QA (Lewis et al., 2020b; Izacard and Grave, 2020) - for knowledge-grounded dialogue, a task that is arguably more challenging as it requires querying based on complex multi-turn dialogue context and generating conversationally coherent responses. We study various types of architectures with multiple components - retrievers, rankers, and encoder-decoders - with the goal of maximizing knowledgeability while retaining conversational ability. We demonstrate that our best models obtain state-of-the-art performance on two knowledge-grounded conversational tasks. The models exhibit open-domain conversational capabilities, generalize effectively to scenarios not within the training data, and, as verified by human evaluations, substantially reduce the well-known problem of knowledge hallucination in state-of-the-art chatbots.