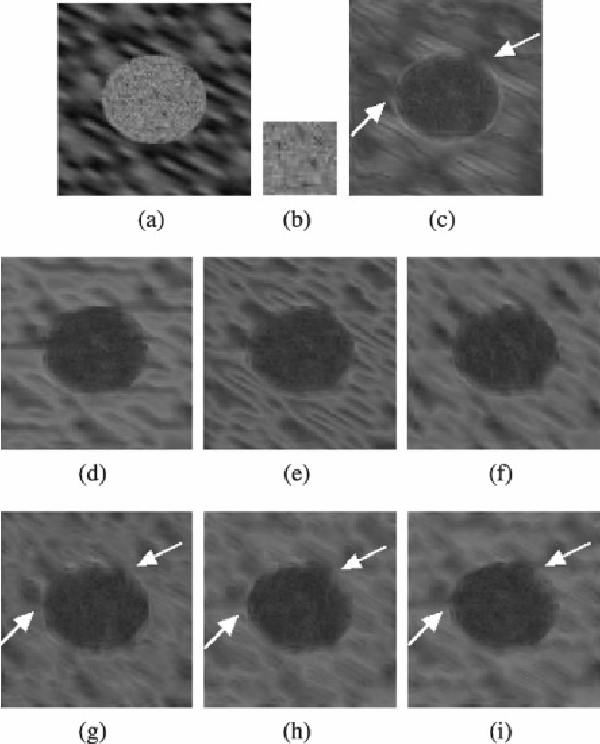 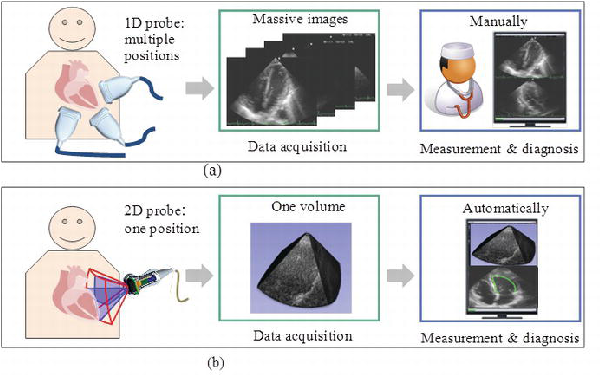 Ultrasound images are one of the most widely used techniques in clinical settings to analyze and detect different organs for study or diagnoses of diseases. The dependence on subjective opinions of experts such as radiologists calls for an automatic recognition and detection system that can provide an objective analysis. Previous work done on this topic is limited and can be classified by the organ of interest. Hybrid neural networks, linear and logistic regression models, 3D reconstructed models, and various machine learning techniques have been used to solve complex problems such as detection of lesions and cancer. Our project aims to use Dual Path Networks (DPN) to segment and detect shapes in ultrasound images taken from 3D printed models of the liver. Further the DPN deep architectures could be coupled with Fully Convolutional Network (FCN) to refine the results. Data denoised with various filters would be used to gauge how they fare against each other and provide the best results. Small amount of dataset works with DPNs, and hence, that should be appropriate for us as our dataset shall be limited in size. Moreover, the ultrasound scans shall need to be taken from different orientations of the scanner with respect to the organ, such that the training dataset can accurately perform segmentation and shape detection.

Accurate detection of pulmonary nodules with high sensitivity and specificity is essential for automatic lung cancer diagnosis from CT scans. Although many deep learning-based algorithms make great progress for improving the accuracy of nodule detection, the high false positive rate is still a challenging problem which limited the automatic diagnosis in routine clinical practice. In this paper, we propose a novel pulmonary nodule detection framework based on a 3D Feature Pyramid Network (3DFPN) to improve the sensitivity of nodule detection by employing multi-scale features to increase the resolution of nodules, as well as a parallel top-down path to transit the high-level semantic features to complement low-level general features. Furthermore, a High Sensitivity and Specificity (HS$^2$) network is introduced to eliminate the falsely detected nodule candidates by tracking the appearance changes in continuous CT slices of each nodule candidate. The proposed framework is evaluated on the public Lung Nodule Analysis (LUNA16) challenge dataset. Our method is able to accurately detect lung nodules at high sensitivity and specificity and achieves $90.4\%$ sensitivity with 1/8 false positive per scan which outperforms the state-of-the-art results $15.6\%$. 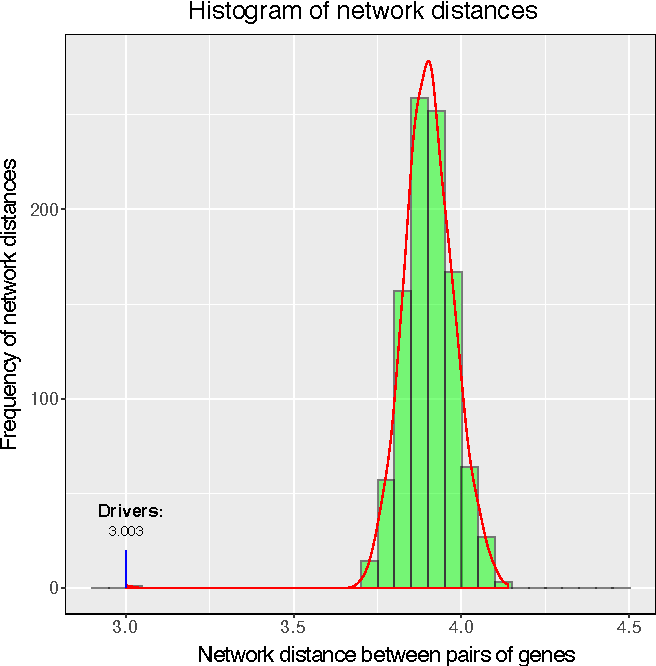 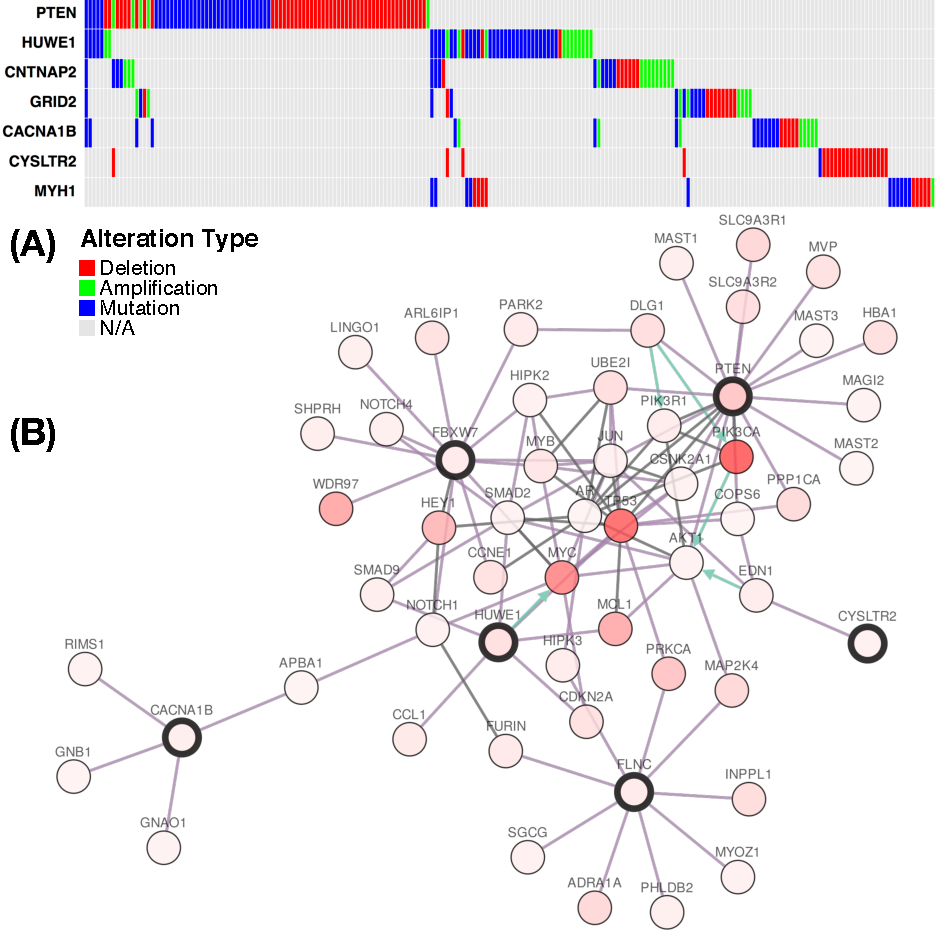 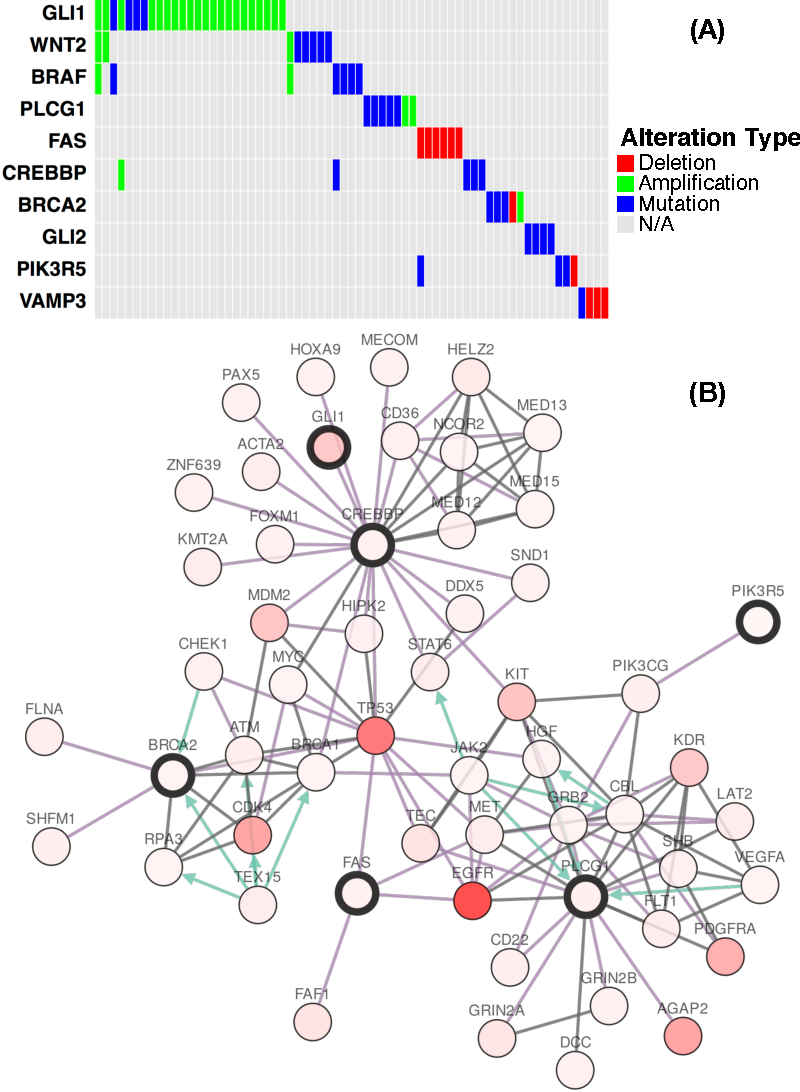 Cancer genomes exhibit a large number of different alterations that affect many genes in a diverse manner. It is widely believed that these alterations follow combinatorial patterns that have a strong connection with the underlying molecular interaction networks and functional pathways. A better understanding of the generative mechanisms behind the mutation rules and their influence on gene communities is of great importance for the process of driver mutations discovery and for identification of network modules related to cancer development and progression. We developed a new method for cancer mutation pattern analysis based on a constrained form of correlation clustering. Correlation clustering is an agnostic learning method that can be used for general community detection problems in which the number of communities or their structure is not known beforehand. The resulting algorithm, named $C^3$, leverages mutual exclusivity of mutations, patient coverage, and driver network concentration principles; it accepts as its input a user determined combination of heterogeneous patient data, such as that available from TCGA (including mutation, copy number, and gene expression information), and creates a large number of clusters containing mutually exclusive mutated genes in a particular type of cancer. The cluster sizes may be required to obey some useful soft size constraints, without impacting the computational complexity of the algorithm. To test $C^3$, we performed a detailed analysis on TCGA breast cancer and glioblastoma data and showed that our algorithm outperforms the state-of-the-art CoMEt method in terms of discovering mutually exclusive gene modules and identifying driver genes. Our $C^3$ method represents a unique tool for efficient and reliable identification of mutation patterns and driver pathways in large-scale cancer genomics studies. 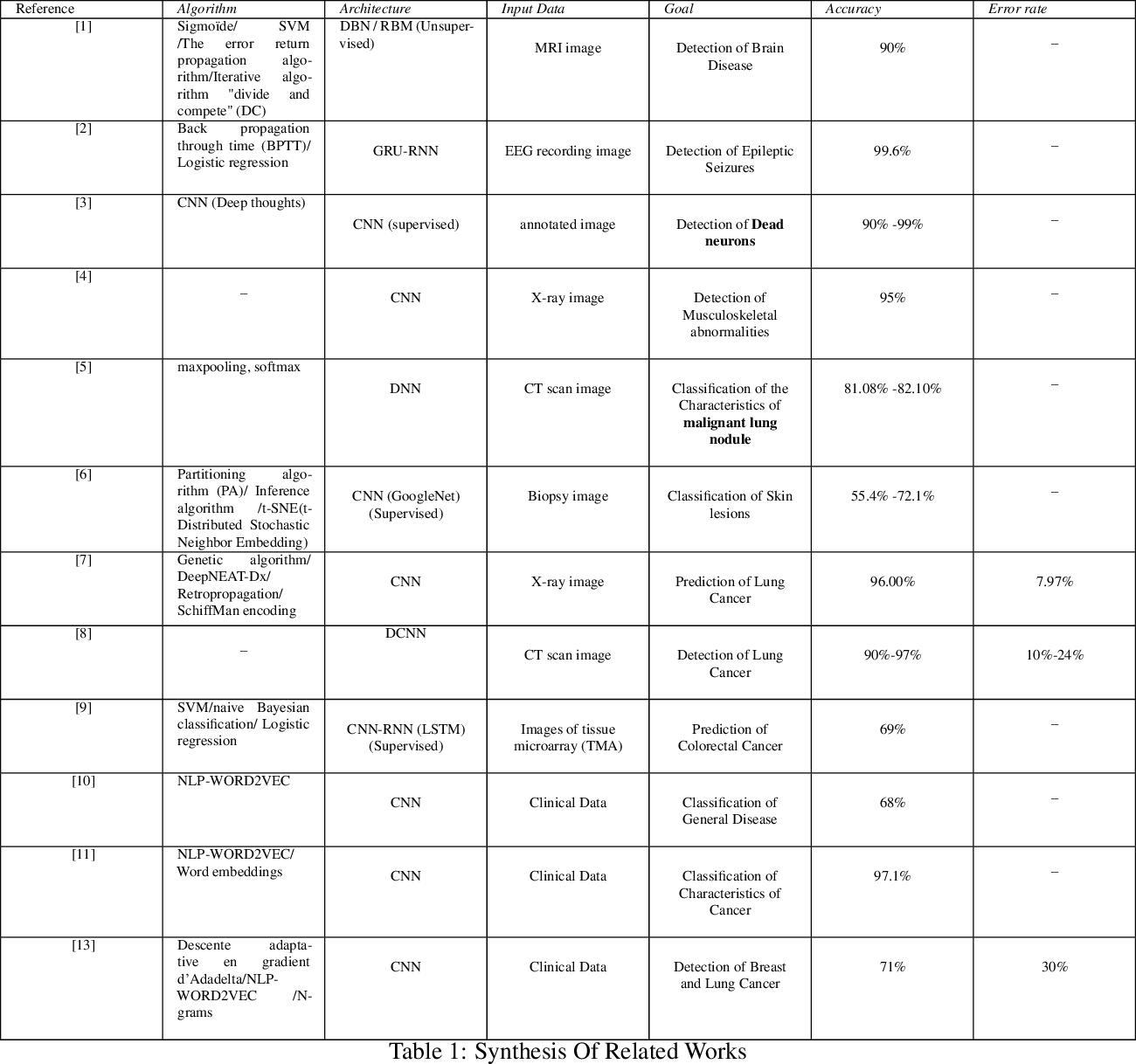 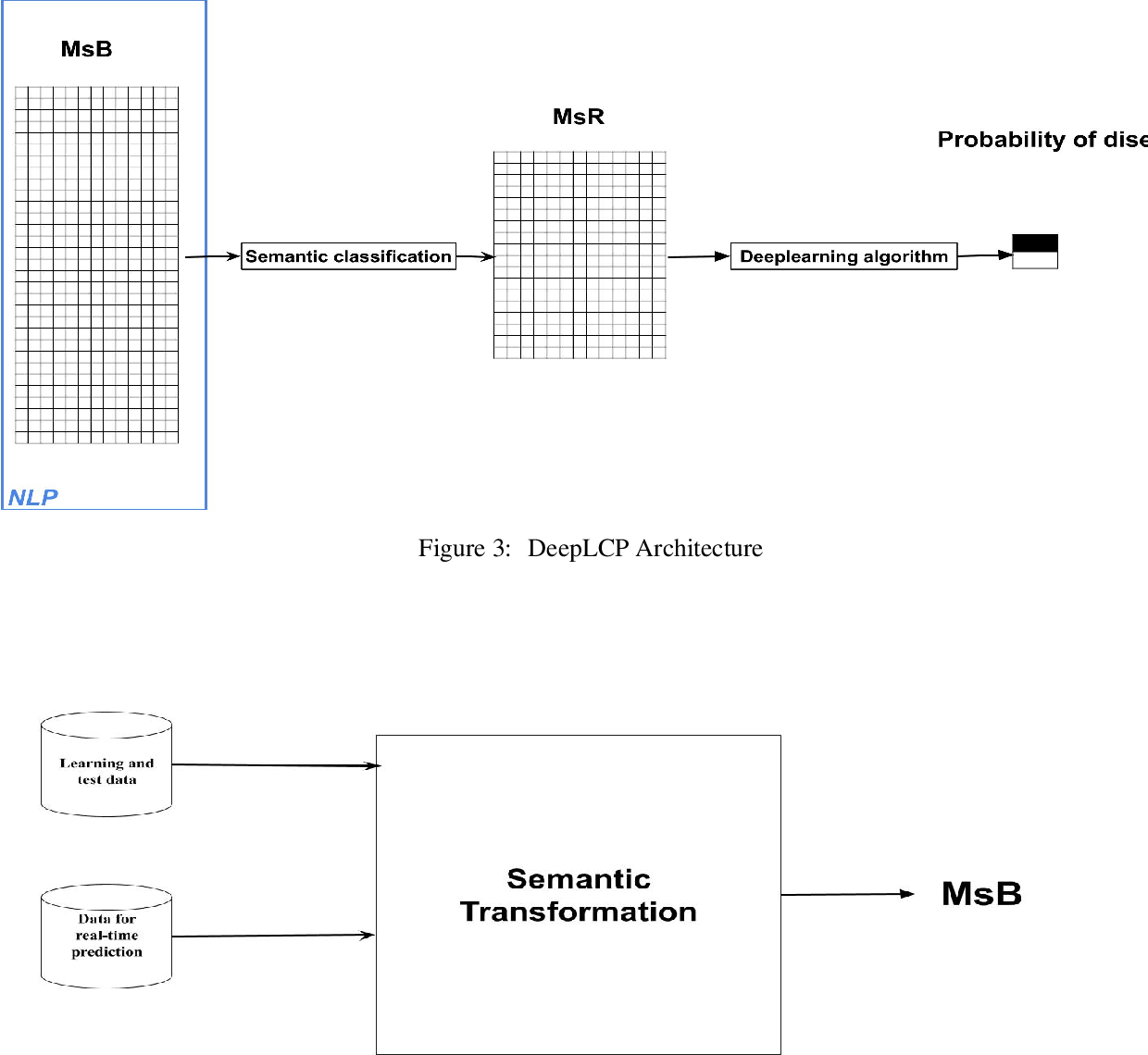 According to GHO (Global Health Observatory (GHO), the high prevalence of a large variety of diseases such as Ischaemic heart disease, stroke, lung cancer disease and lower respiratory infections have remained the top killers during the past decade. The growth in the number of mortalities caused by these disease is due to the very delayed symptoms'detection. Since in the early stages, the symptoms are insignificant and similar to those of benign diseases (e.g. the flu ), and we can only detect the disease at an advanced stage. In addition, The high frequency of improper practices that are harmful to health, the hereditary factors, and the stressful living conditions can increase the death rates. Many researches dealt with these fatal disease, and most of them applied advantage machine learning models to deal with image diagnosis. However the drawback is that imagery permit only to detect disease at a very delayed stage and then patient can hardly be saved. In this Paper we present our new approach "DeepLCP" to predict fatal diseases that threaten people's lives. It's mainly based on raw and heterogeneous data of the concerned (or under-tested) person. "DeepLCP" results of a combination combination of the Natural Language Processing (NLP) and the deep learning paradigm.The experimental results of the proposed model in the case of Lung cancer prediction have approved high accuracy and a low loss data rate during the validation of the disease prediction. 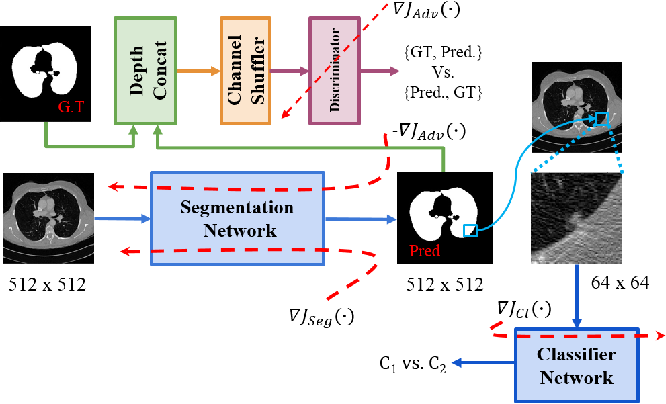 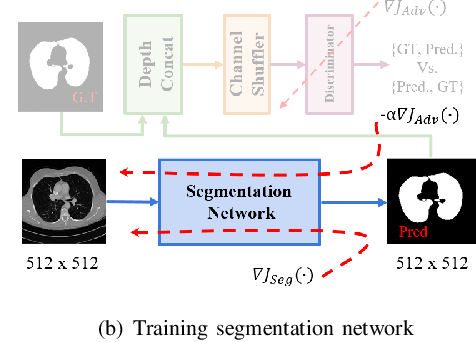 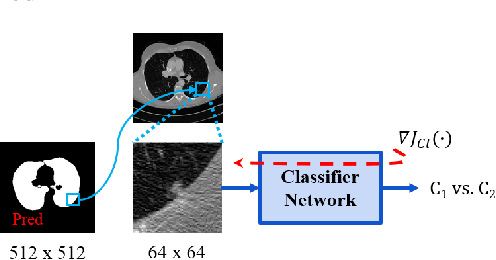 Lung cancer is the most common form of cancer found worldwide with a high mortality rate. Early detection of pulmonary nodules by screening with a low-dose computed tomography (CT) scan is crucial for its effective clinical management. Nodules which are symptomatic of malignancy occupy about 0.0125 - 0.025\% of volume in a CT scan of a patient. Manual screening of all slices is a tedious task and presents a high risk of human errors. To tackle this problem we propose a computationally efficient two stage framework. In the first stage, a convolutional neural network (CNN) trained adversarially using Turing test loss segments the lung region. In the second stage, patches sampled from the segmented region are then classified to detect the presence of nodules. The proposed method is experimentally validated on the LUNA16 challenge dataset with a dice coefficient of $0.984\pm0.0007$ for 10-fold cross-validation. 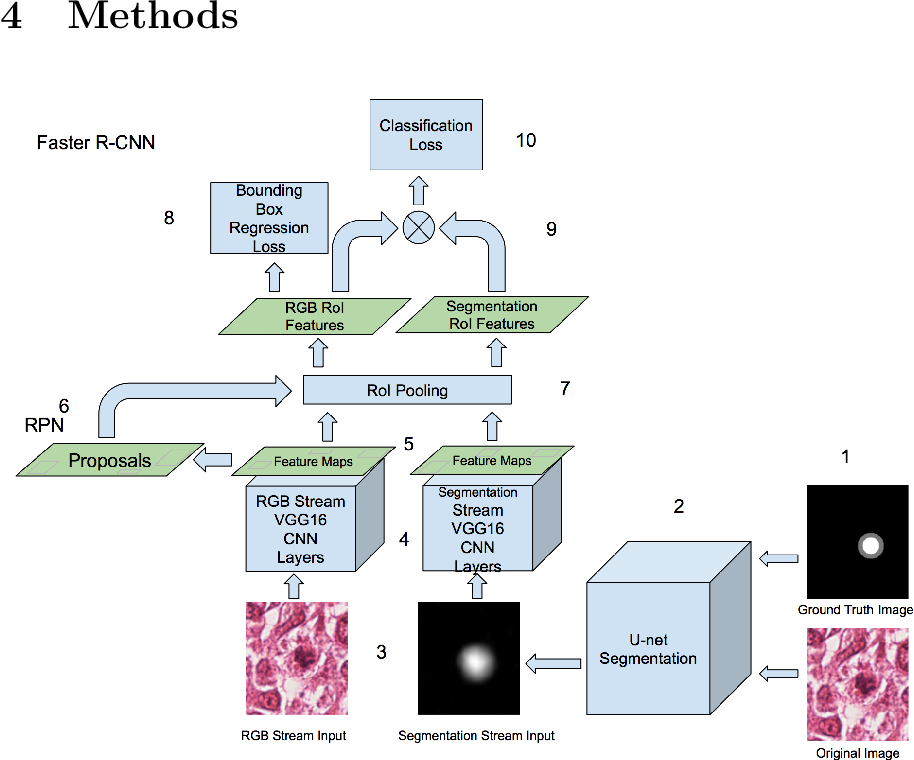 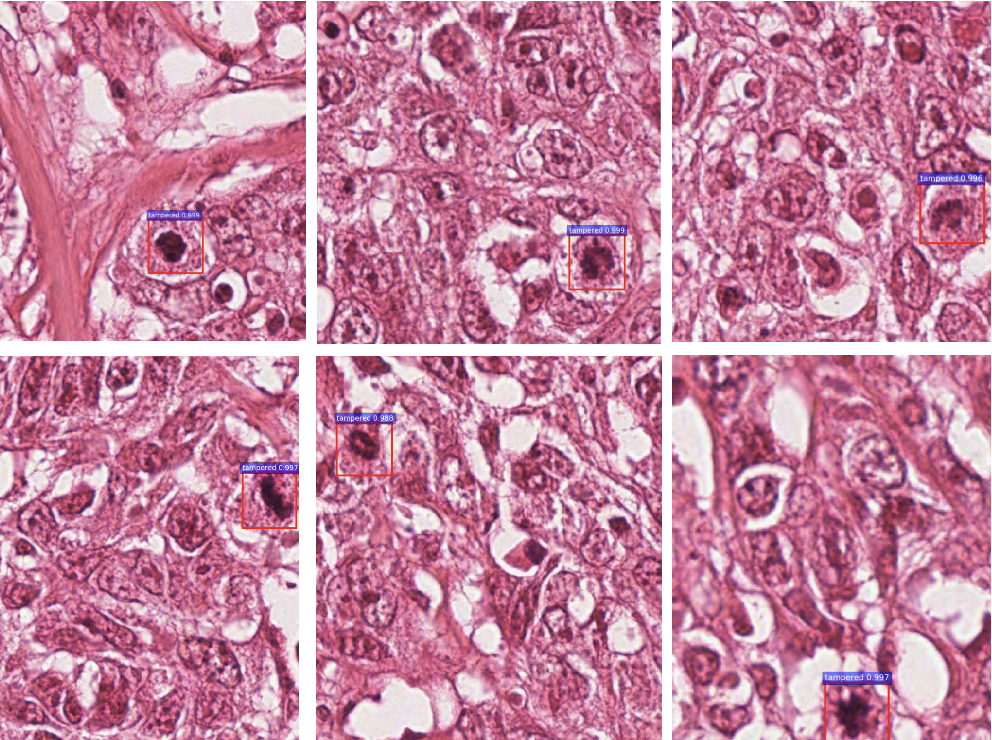 Mitotic count is a commonly used method to assess the level of progression of breast cancer, which is now the fourth most prevalent cancer. Unfortunately, counting mitosis is a tedious and subjective task with poor reproducibility, especially for non-experts. Luckily, since the machine can read and compare more data with greater efficiency this could be the next modern technique to count mitosis. Furthermore, technological advancements in medicine have led to the increase in image data available for use in training. In this work, we propose a network constructed using a similar approach to one that has been used for image fraud detection with the segmented image map as the second stream input to Faster RCNN. This region-based detection model combines a fully convolutional Region Proposal Network to generate proposals and a classification network to classify each of these proposals as containing mitosis or not. Features from both streams are fused in the bilinear pooling layer to maintain the spatial concurrence of each. After training this model on the ICPR 2014 MITOSIS contest dataset, we received an F-measure score of 0.507, higher than both the winners score and scores from recent tests on the same data. Our method is clinically applicable, taking only around five min per ten full High Power Field slides when tested on a Quadro P6000 cloud GPU. 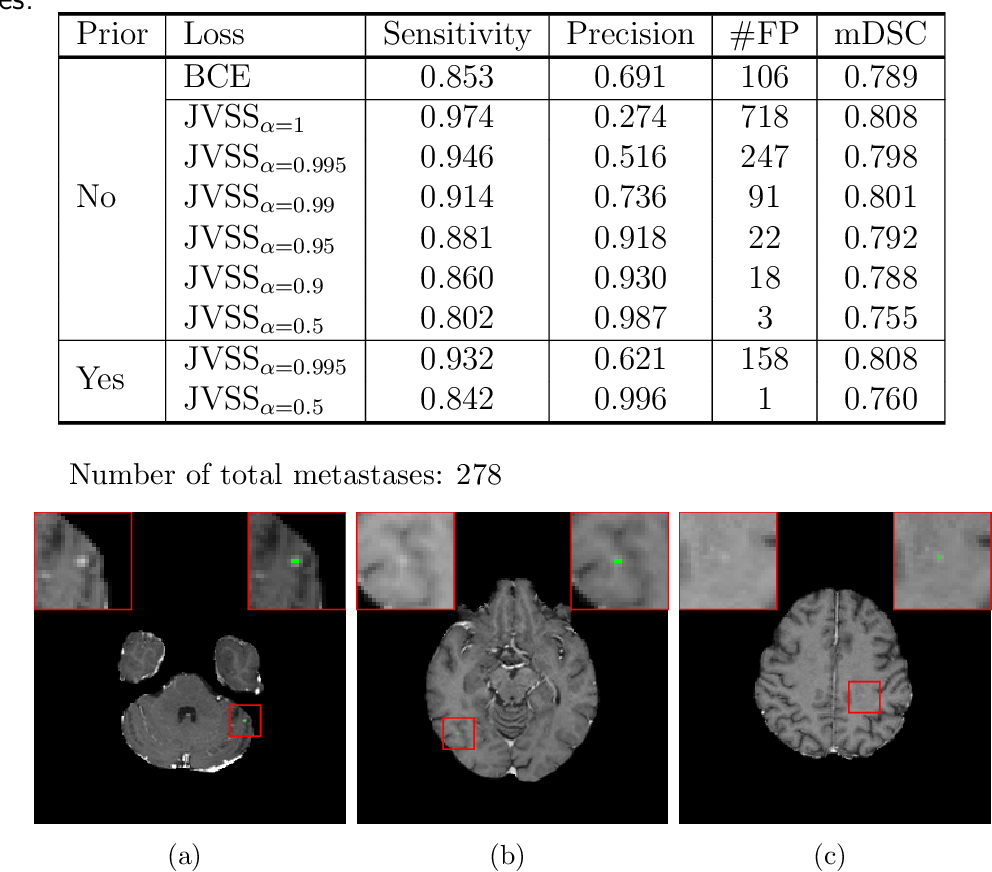 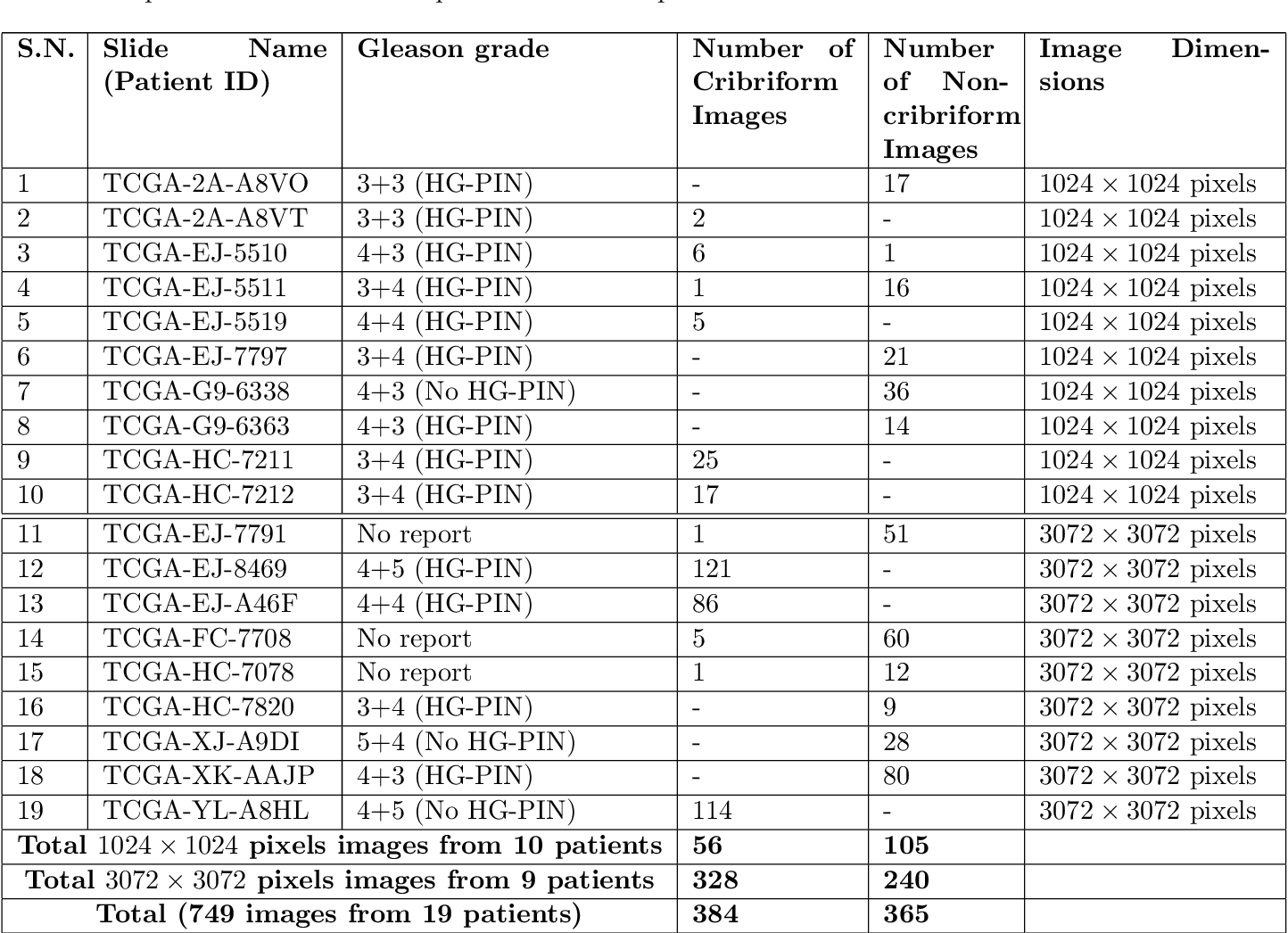 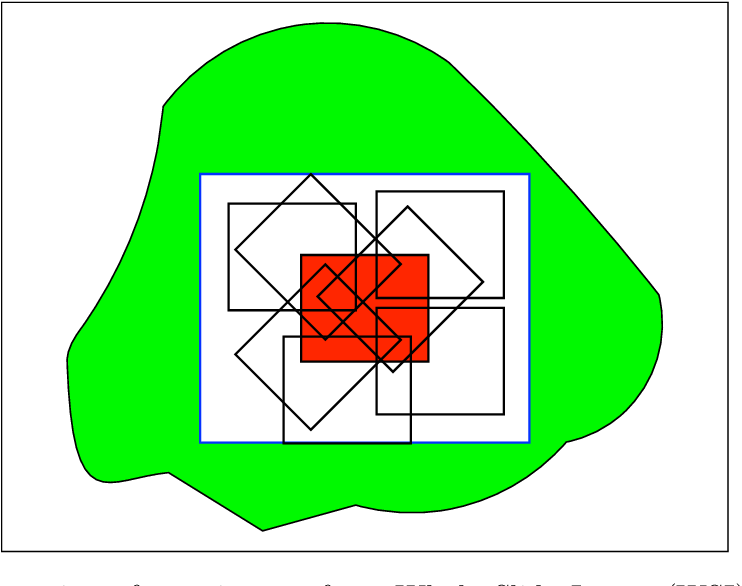 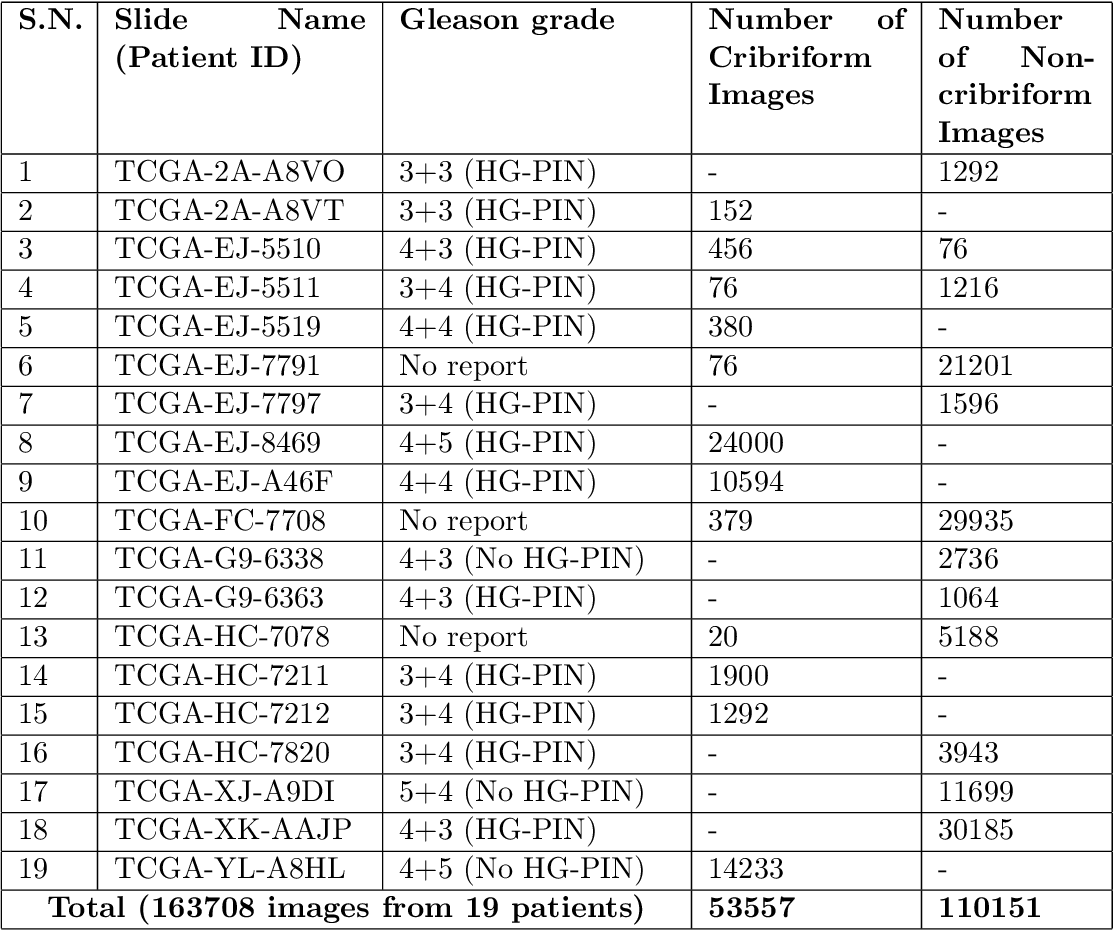 Architecture, size, and shape of glands are most important patterns used by pathologists for assessment of cancer malignancy in prostate histopathological tissue slides. Varying structures of glands along with cumbersome manual observations may result in subjective and inconsistent assessment. Cribriform gland with irregular border is an important feature in Gleason pattern 4. We propose using deep neural networks for cribriform pattern classification in prostate histopathological images. $163708$ Hematoxylin and Eosin (H\&E) stained images were extracted from histopathologic tissue slides of $19$ patients with prostate cancer and annotated for cribriform patterns. Our automated image classification system analyses the H\&E images to classify them as either `Cribriform' or `Non-cribriform'. Our system uses various deep learning approaches and hand-crafted image pixel intensity-based features. We present our results for cribriform pattern detection across various parameters and configuration allowed by our system. The combination of fine-tuned deep learning models outperformed the state-of-art nuclei feature based methods. Our image classification system achieved the testing accuracy of $85.93~\pm~7.54$ (cross-validated) and $88.04~\pm~5.63$ ( additional unseen test set) across three folds. In this paper, we present an annotated cribriform dataset along with analysis of deep learning models and hand-crafted features for cribriform pattern detection in prostate histopathological images.

The nuclear protein Ki-67 and Tumor infiltrating lymphocytes (TILs) have been introduced as prognostic factors in predicting tumor progression and its treatment response. The value of the Ki-67 index and TILs in approach to heterogeneous tumors such as Breast cancer (BC), known as the most common cancer in women worldwide, has been highlighted in the literature. Due to the indeterminable and subjective nature of Ki-67 as well as TILs scoring, automated methods using machine learning, specifically approaches based on deep learning, have attracted attention. Yet, deep learning methods need considerable annotated data. In the absence of publicly available benchmarks for BC Ki-67 stained cell detection and further annotated classification of cells, we propose SHIDC-BC-Ki-67 as a dataset for the aforementioned purpose. We also introduce a novel pipeline and a backend, namely PathoNet for Ki-67 immunostained cell detection and classification and simultaneous determination of intratumoral TILs score. Further, we show that despite facing challenges, our proposed backend, PathoNet, outperforms the state of the art methods proposed to date in the harmonic mean measure.