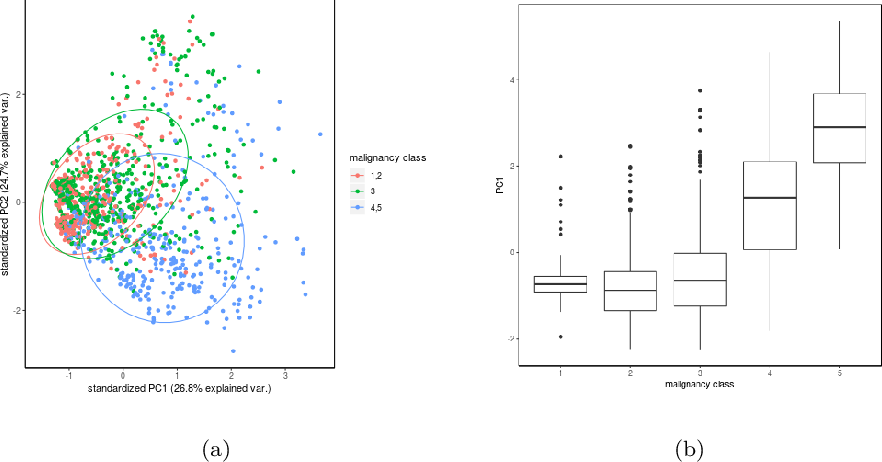 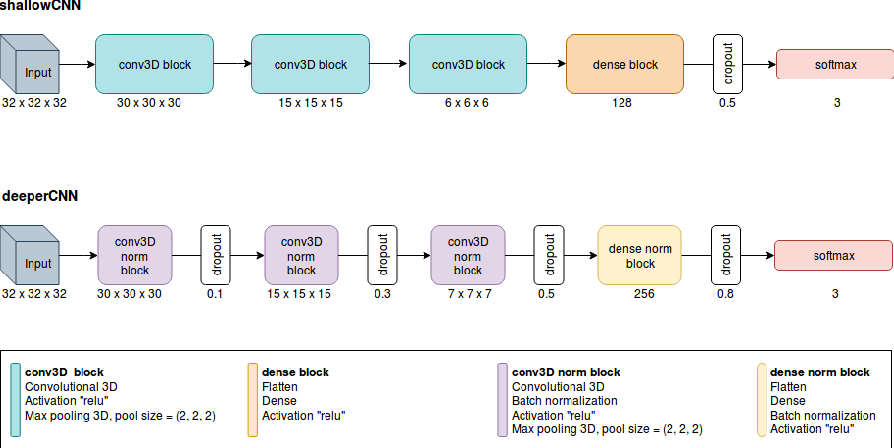 The early identification of malignant pulmonary nodules is critical for better lung cancer prognosis and less invasive chemo or radio therapies. Nodule malignancy assessment done by radiologists is extremely useful for planning a preventive intervention but is, unfortunately, a complex, time-consuming and error-prone task. This explains the lack of large datasets containing radiologists malignancy characterization of nodules. In this article, we propose to assess nodule malignancy through 3D convolutional neural networks and to integrate it in an automated end-to-end existing pipeline of lung cancer detection. For training and testing purposes we used independent subsets of the LIDC dataset. Adding the probabilities of nodules malignity in a baseline lung cancer pipeline improved its F1-weighted score by 14.7%, whereas integrating the malignancy model itself using transfer learning outperformed the baseline prediction by 11.8% of F1-weighted score. Despite the limited size of the lung cancer datasets, integrating predictive models of nodule malignancy improves prediction of lung cancer. 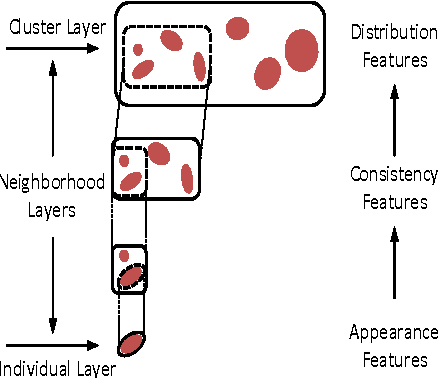 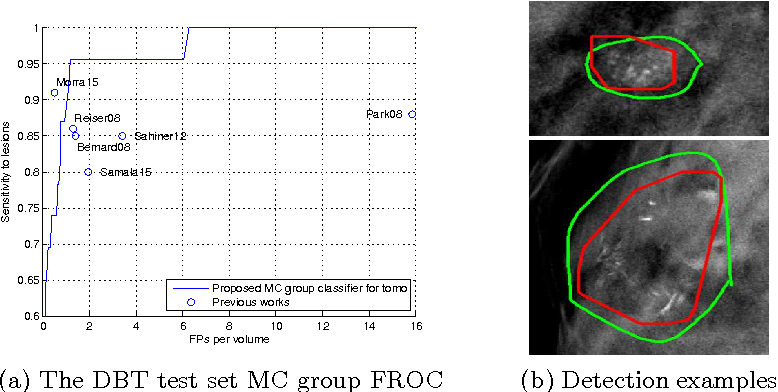 A novel hierarchical model is introduced to solve a general problem of detecting groups of similar objects. Under this model, detection of groups is performed in hierarchically organized layers while each layer represents a scope for target objects. The processing of these layers involves sequential extraction of appearance features for an individual object, consistency measurement features for nearby objects, and finally the distribution features for all objects within the group. Using the concept of scope-based normalization, the extracted features not only enhance local contrast of an individual object, but also provide consistent characterization for all related objects. As an example, a microcalcification group detection system for 2D mammography was developed, and then the learned model was transferred to 3D digital breast tomosynthesis without any retraining or fine-tuning. The detection system demonstrated state-of-the-art performance and detected 96% of cancerous lesions at the rate of 1.2 false positives per volume as measured on an independent tomosynthesis test set. 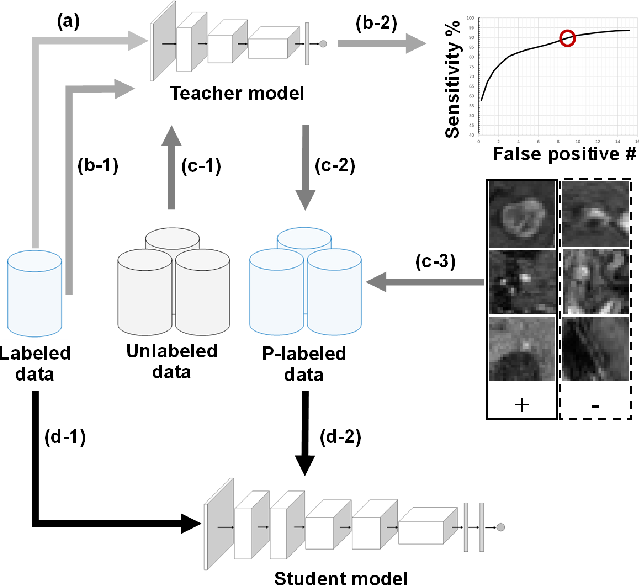 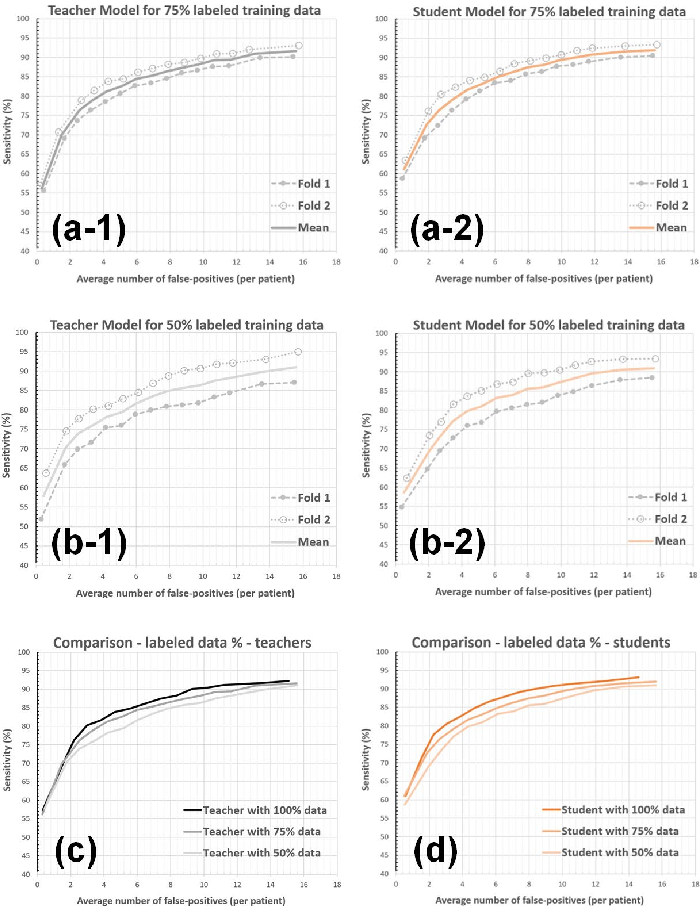 The detection of brain metastases (BM) in their early stages could have a positive impact on the outcome of cancer patients. We previously developed a framework for detecting small BM (with diameters of less than 15mm) in T1-weighted Contrast-Enhanced 3D Magnetic Resonance images (T1c) to assist medical experts in this time-sensitive and high-stakes task. The framework utilizes a dedicated convolutional neural network (CNN) trained using labeled T1c data, where the ground truth BM segmentations were provided by a radiologist. This study aims to advance the framework with a noisy student-based self-training strategy to make use of a large corpus of unlabeled T1c data (i.e., data without BM segmentations or detections). Accordingly, the work (1) describes the student and teacher CNN architectures, (2) presents data and model noising mechanisms, and (3) introduces a novel pseudo-labeling strategy factoring in the learned BM detection sensitivity of the framework. Finally, it describes a semi-supervised learning strategy utilizing these components. We performed the validation using 217 labeled and 1247 unlabeled T1c exams via 2-fold cross-validation. The framework utilizing only the labeled exams produced 9.23 false positives for 90% BM detection sensitivity; whereas, the framework using the introduced learning strategy led to ~9% reduction in false detections (i.e., 8.44) for the same sensitivity level. Furthermore, while experiments utilizing 75% and 50% of the labeled datasets resulted in algorithm performance degradation (12.19 and 13.89 false positives respectively), the impact was less pronounced with the noisy student-based training strategy (10.79 and 12.37 false positives respectively).

Anomaly detection based on one-class classification algorithms is broadly used in many applied domains like image processing (e.g. detection of whether a patient is "cancerous" or "healthy" from mammography image), network intrusion detection, etc. Performance of an anomaly detection algorithm crucially depends on a kernel, used to measure similarity in a feature space. The standard approaches (e.g. cross-validation) for kernel selection, used in two-class classification problems, can not be used directly due to the specific nature of a data (absence of a second, abnormal, class data). In this paper we generalize several kernel selection methods from binary-class case to the case of one-class classification and perform extensive comparison of these approaches using both synthetic and real-world data. 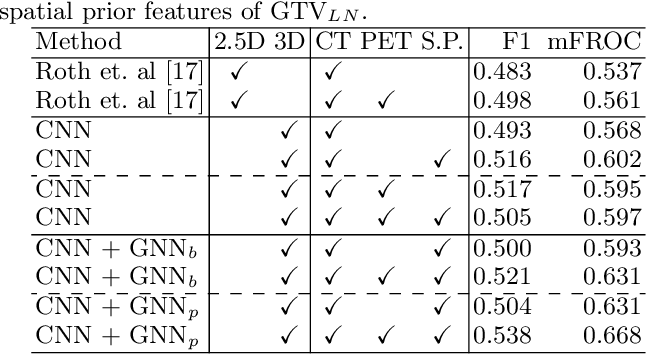 Determining the spread of GTV$_{LN}$ is essential in defining the respective resection or irradiating regions for the downstream workflows of surgical resection and radiotherapy for many cancers. Different from the more common enlarged lymph node (LN), GTV$_{LN}$ also includes smaller ones if associated with high positron emission tomography signals and/or any metastasis signs in CT. This is a daunting task. In this work, we propose a unified LN appearance and inter-LN relationship learning framework to detect the true GTV$_{LN}$. This is motivated by the prior clinical knowledge that LNs form a connected lymphatic system, and the spread of cancer cells among LNs often follows certain pathways. Specifically, we first utilize a 3D convolutional neural network with ROI-pooling to extract the GTV$_{LN}$'s instance-wise appearance features. Next, we introduce a graph neural network to further model the inter-LN relationships where the global LN-tumor spatial priors are included in the learning process. This leads to an end-to-end trainable network to detect by classifying GTV$_{LN}$. We operate our model on a set of GTV$_{LN}$ candidates generated by a preliminary 1st-stage method, which has a sensitivity of $>85\%$ at the cost of high false positive (FP) ($>15$ FPs per patient). We validate our approach on a radiotherapy dataset with 142 paired PET/RTCT scans containing the chest and upper abdominal body parts. The proposed method significantly improves over the state-of-the-art (SOTA) LN classification method by $5.5\%$ and $13.1\%$ in F1 score and the averaged sensitivity value at $2, 3, 4, 6$ FPs per patient, respectively. 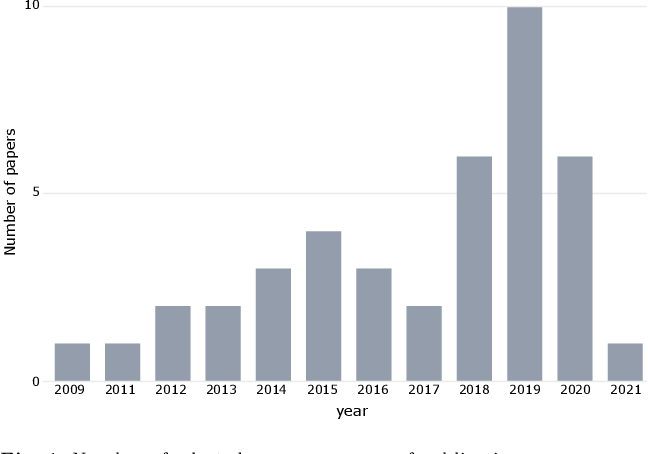 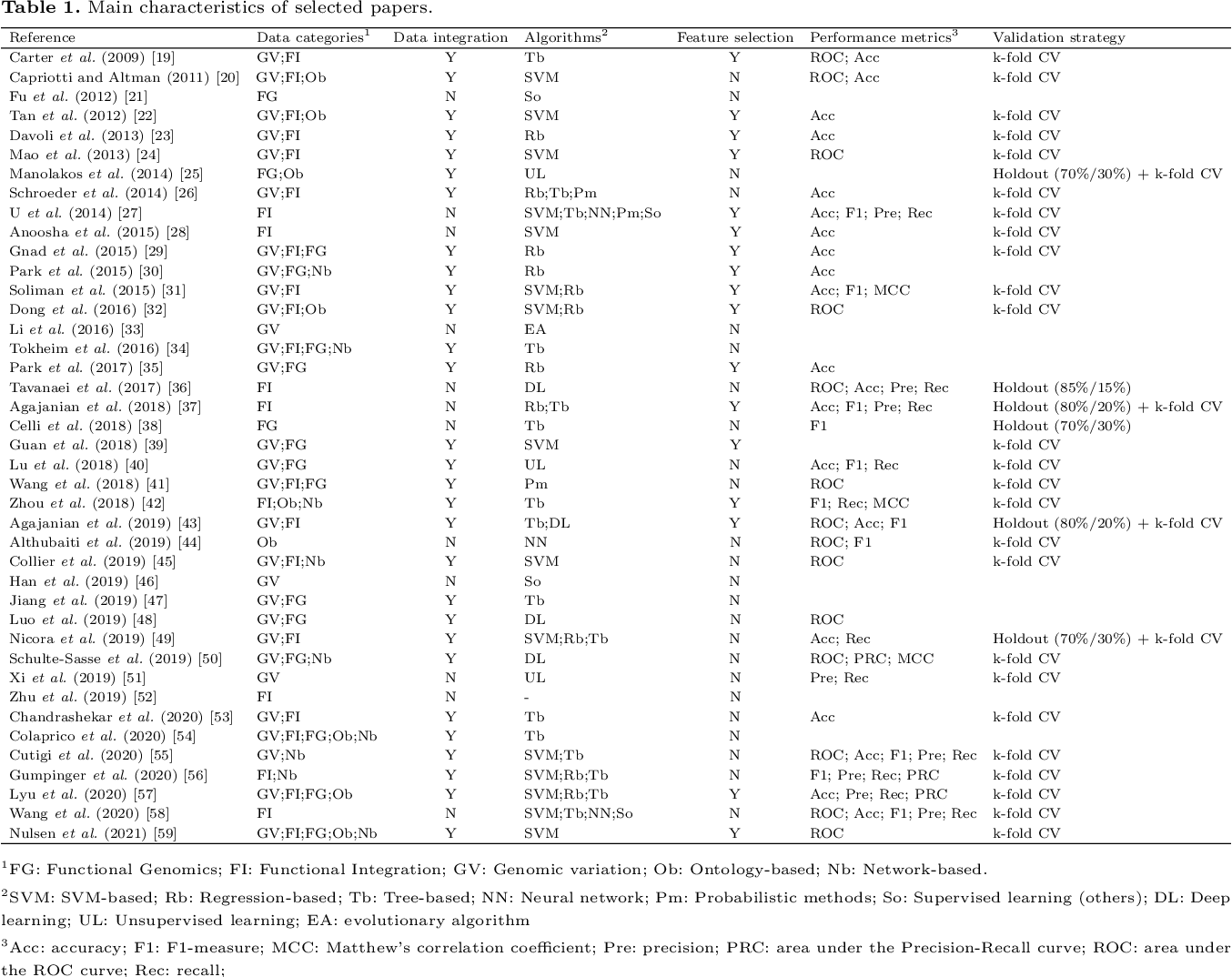 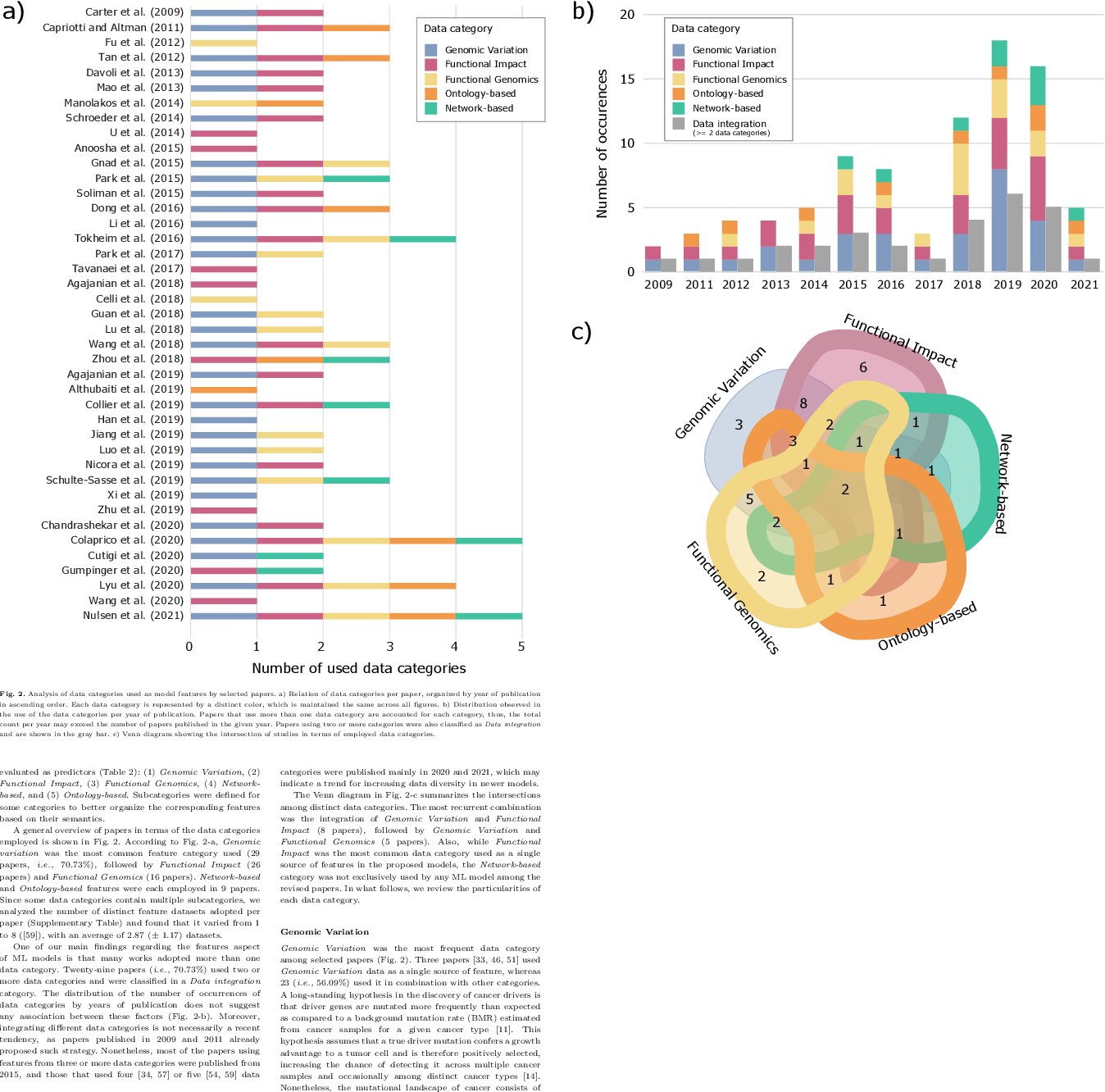 Identifying the genes and mutations that drive the emergence of tumors is a major step to improve understanding of cancer and identify new directions for disease diagnosis and treatment. Despite the large volume of genomics data, the precise detection of driver mutations and their carrying genes, known as cancer driver genes, from the millions of possible somatic mutations remains a challenge. Computational methods play an increasingly important role in identifying genomic patterns associated with cancer drivers and developing models to predict driver events. Machine learning (ML) has been the engine behind many of these efforts and provides excellent opportunities for tackling remaining gaps in the field. Thus, this survey aims to perform a comprehensive analysis of ML-based computational approaches to identify cancer driver mutations and genes, providing an integrated, panoramic view of the broad data and algorithmic landscape within this scientific problem. We discuss how the interactions among data types and ML algorithms have been explored in previous solutions and outline current analytical limitations that deserve further attention from the scientific community. We hope that by helping readers become more familiar with significant developments in the field brought by ML, we may inspire new researchers to address open problems and advance our knowledge towards cancer driver discovery.

An Analysis of the Methods Employed for Breast Cancer Diagnosis 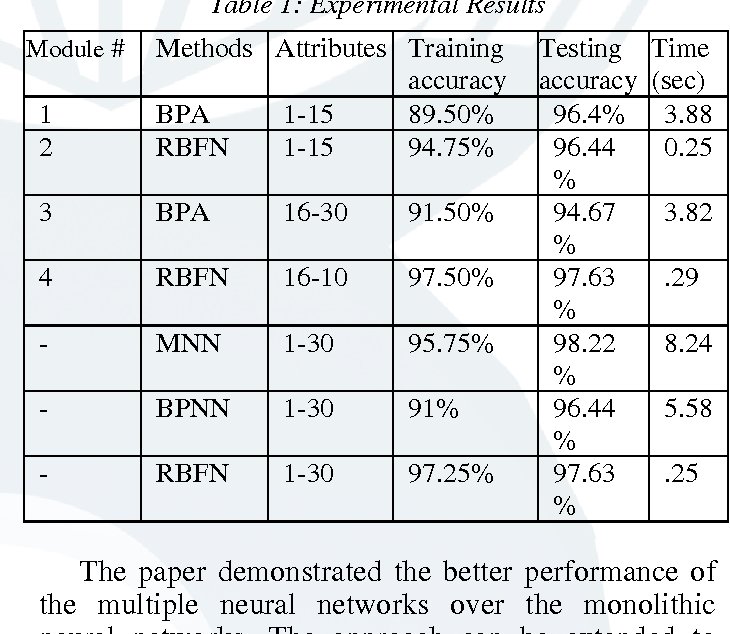 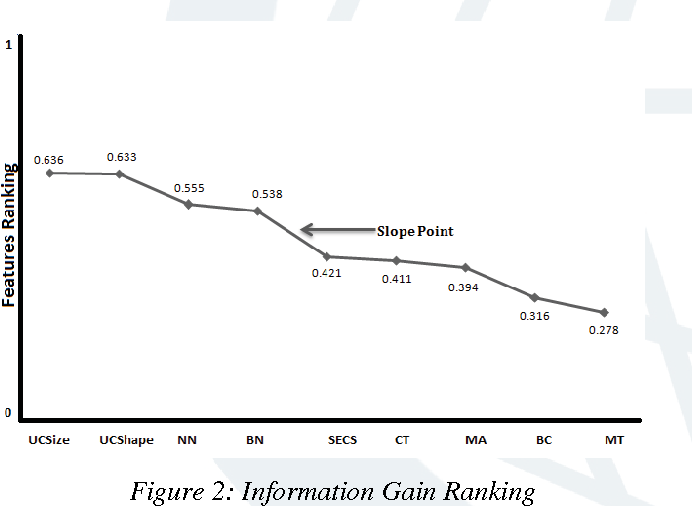 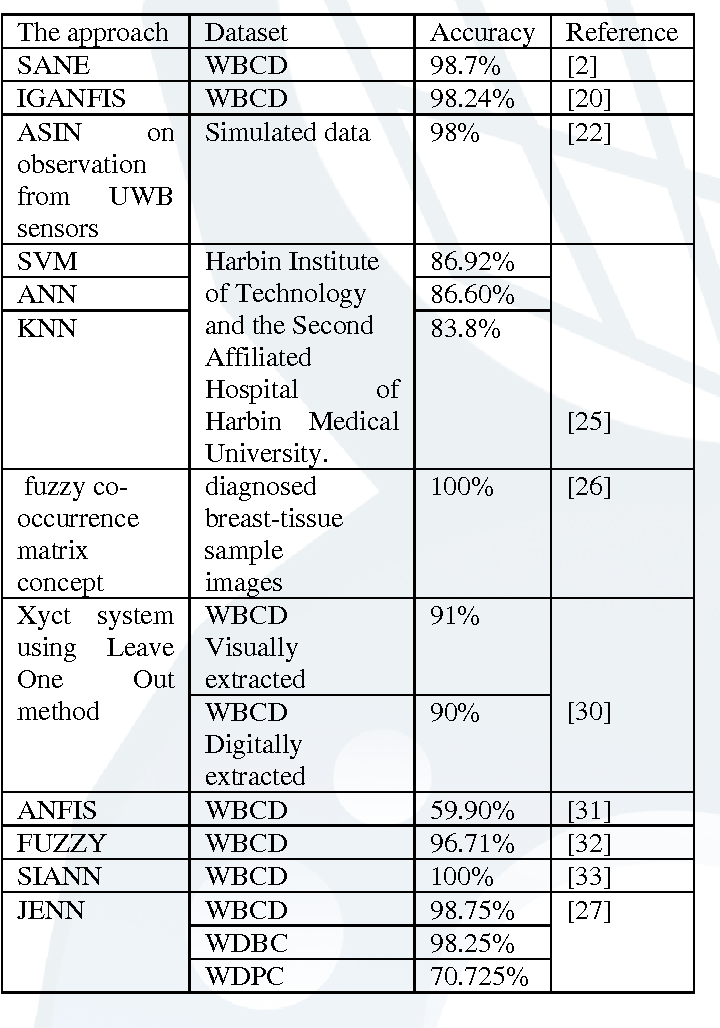 Breast cancer research over the last decade has been tremendous. The ground breaking innovations and novel methods help in the early detection, in setting the stages of the therapy and in assessing the response of the patient to the treatment. The prediction of the recurrent cancer is also crucial for the survival of the patient. This paper studies various techniques used for the diagnosis of breast cancer. Different methods are explored for their merits and de-merits for the diagnosis of breast lesion. Some of the methods are yet unproven but the studies look very encouraging. It was found that the recent use of the combination of Artificial Neural Networks in most of the instances gives accurate results for the diagnosis of breast cancer and their use can also be extended to other diseases. 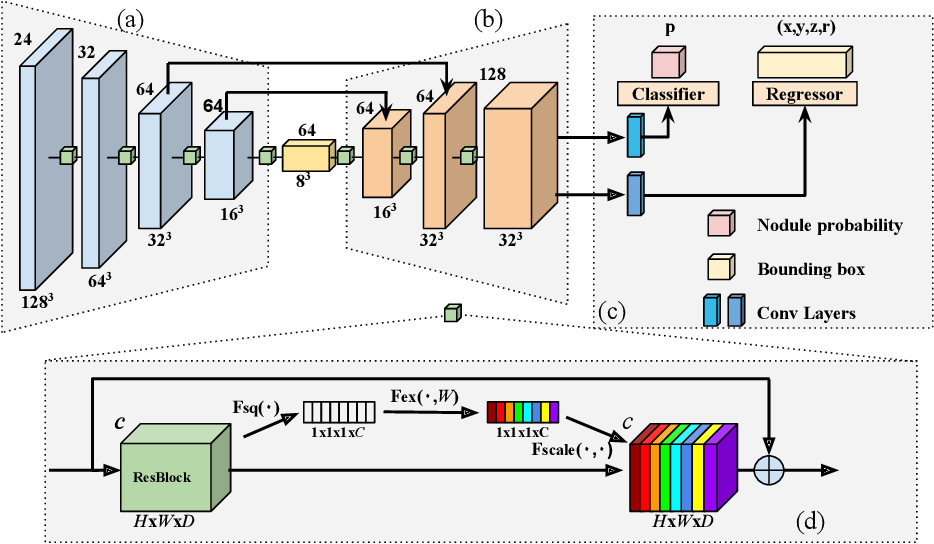 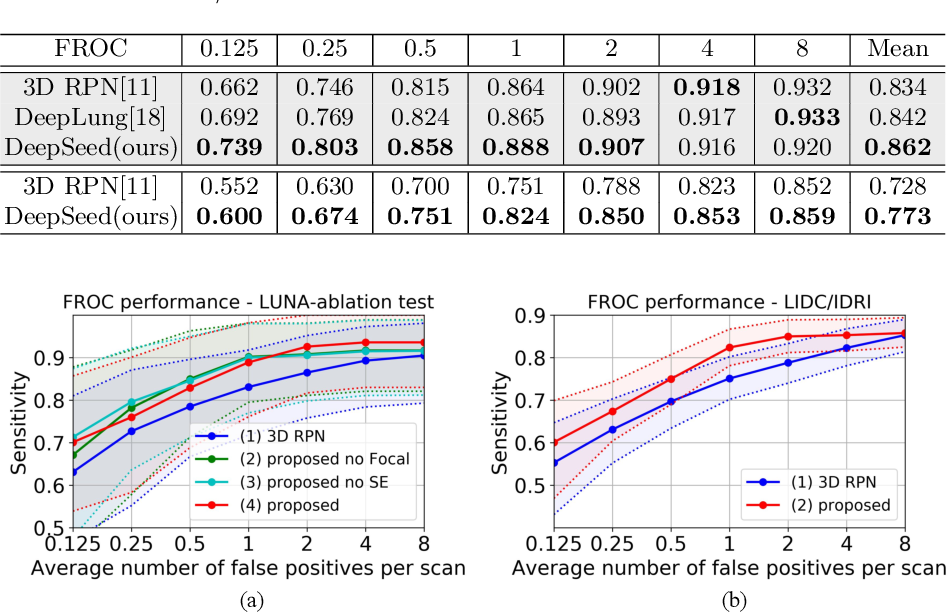 Pulmonary nodule detection plays an important role in lung cancer screening with low-dose computed tomography (CT) scans. Although promising performance has been achieved by deep learning based nodule detection methods, it remains challenging to build nodule detection networks with good generalization performance due to unbalanced positive and negative samples. In order to overcome this problem and further improve state-of-the-art region proposal network methods, we develop a novel deep 3D convolutional neural network with an Encoder-Decoder structure for pulmonary nodule detection. Particularly, we utilize a dynamically scaled cross entropy loss to reduce the false positive rate and compensate the significant data imbalance problem. We adopt the squeeze-and-excitation structure to learn effective image features and fully utilize channel inter-dependency. We have validated our method based on publicly available CT scans from LIDC/IDRI dataset and its subset LUNA16 with thinner slices. Ablation studies and experimental results have demonstrated that our method could outperform state-of-the-art nodule detection methods by a large margin, with an average FROC score of 86.2% on LUNA16, and an average FROC score of 77.3% on LIDC/IDRI dataset when trained on LUNA16 only.

Breast mass detection in digital mammography based on anchor-free architecture 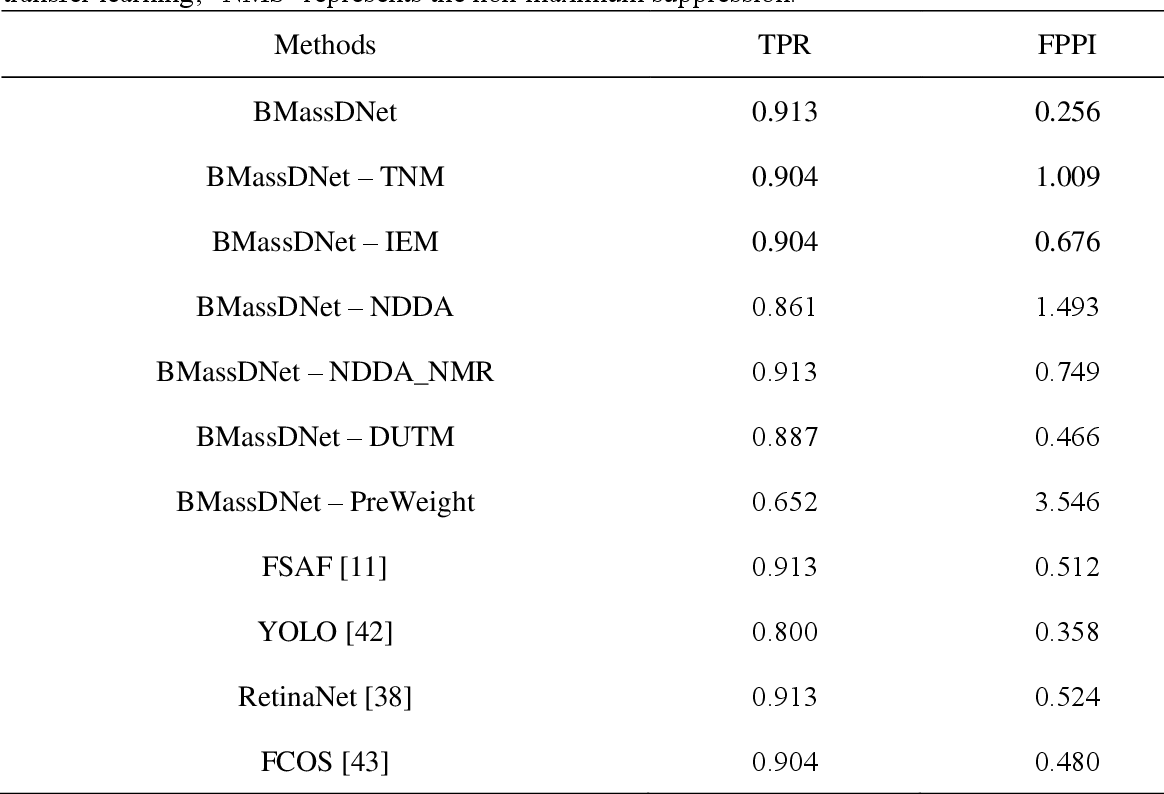 Background and Objective: Accurate detection of breast masses in mammography images is critical to diagnose early breast cancer, which can greatly improve the patients survival rate. However, it is still a big challenge due to the heterogeneity of breast masses and the complexity of their surrounding environment.Methods: To address these problems, we propose a one-stage object detection architecture, called Breast Mass Detection Network (BMassDNet), based on anchor-free and feature pyramid which makes the detection of breast masses of different sizes well adapted. We introduce a truncation normalization method and combine it with adaptive histogram equalization to enhance the contrast between the breast mass and the surrounding environment. Meanwhile, to solve the overfitting problem caused by small data size, we propose a natural deformation data augmentation method and mend the train data dynamic updating method based on the data complexity to effectively utilize the limited data. Finally, we use transfer learning to assist the training process and to improve the robustness of the model ulteriorly.Results: On the INbreast dataset, each image has an average of 0.495 false positives whilst the recall rate is 0.930; On the DDSM dataset, when each image has 0.599 false positives, the recall rate reaches 0.943.Conclusions: The experimental results on datasets INbreast and DDSM show that the proposed BMassDNet can obtain competitive detection performance over the current top ranked methods.