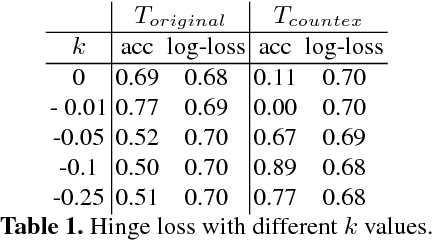 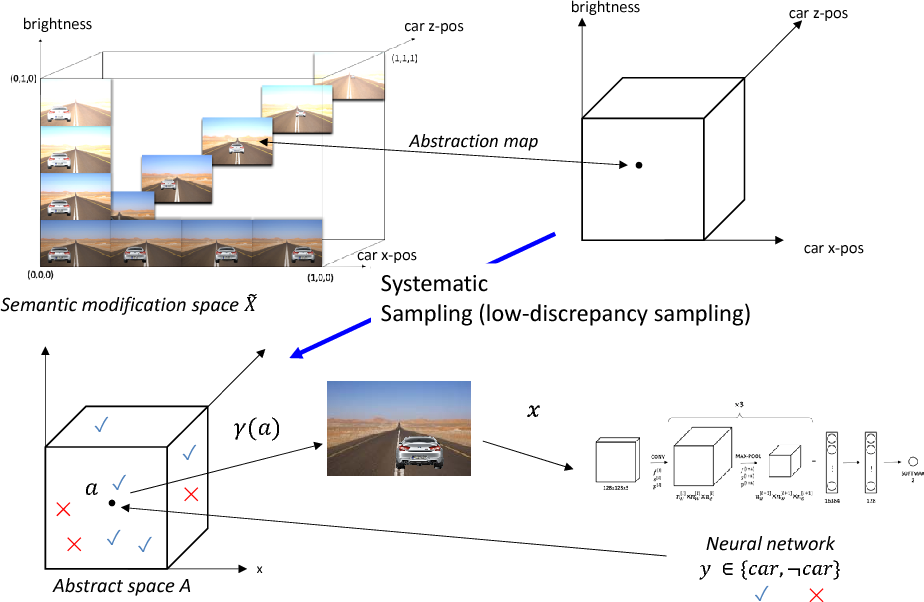 Fueled by massive amounts of data, models produced by machine-learning (ML) algorithms, especially deep neural networks, are being used in diverse domains where trustworthiness is a concern, including automotive systems, finance, health care, natural language processing, and malware detection. Of particular concern is the use of ML algorithms in cyber-physical systems (CPS), such as self-driving cars and aviation, where an adversary can cause serious consequences. However, existing approaches to generating adversarial examples and devising robust ML algorithms mostly ignore the semantics and context of the overall system containing the ML component. For example, in an autonomous vehicle using deep learning for perception, not every adversarial example for the neural network might lead to a harmful consequence. Moreover, one may want to prioritize the search for adversarial examples towards those that significantly modify the desired semantics of the overall system. Along the same lines, existing algorithms for constructing robust ML algorithms ignore the specification of the overall system. In this paper, we argue that the semantics and specification of the overall system has a crucial role to play in this line of research. We present preliminary research results that support this claim.

A Survey on Visual Map Localization Using LiDARs and Cameras 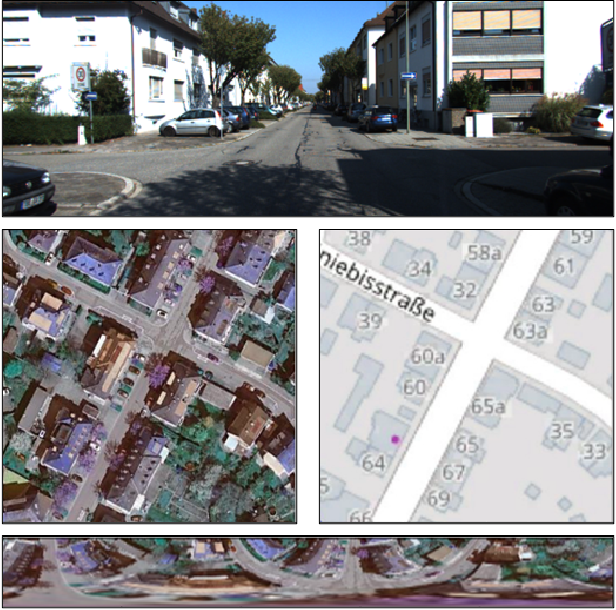 As the autonomous driving industry is slowly maturing, visual map localization is quickly becoming the standard approach to localize cars as accurately as possible. Owing to the rich data returned by visual sensors such as cameras or LiDARs, researchers are able to build different types of maps with various levels of details, and use them to achieve high levels of vehicle localization accuracy and stability in urban environments. Contrary to the popular SLAM approaches, visual map localization relies on pre-built maps, and is focused solely on improving the localization accuracy by avoiding error accumulation or drift. We define visual map localization as a two-stage process. At the stage of place recognition, the initial position of the vehicle in the map is determined by comparing the visual sensor output with a set of geo-tagged map regions of interest. Subsequently, at the stage of map metric localization, the vehicle is tracked while it moves across the map by continuously aligning the visual sensors' output with the current area of the map that is being traversed. In this paper, we survey, discuss and compare the latest methods for LiDAR based, camera based and cross-modal visual map localization for both stages, in an effort to highlight the strength and weakness of each approach. 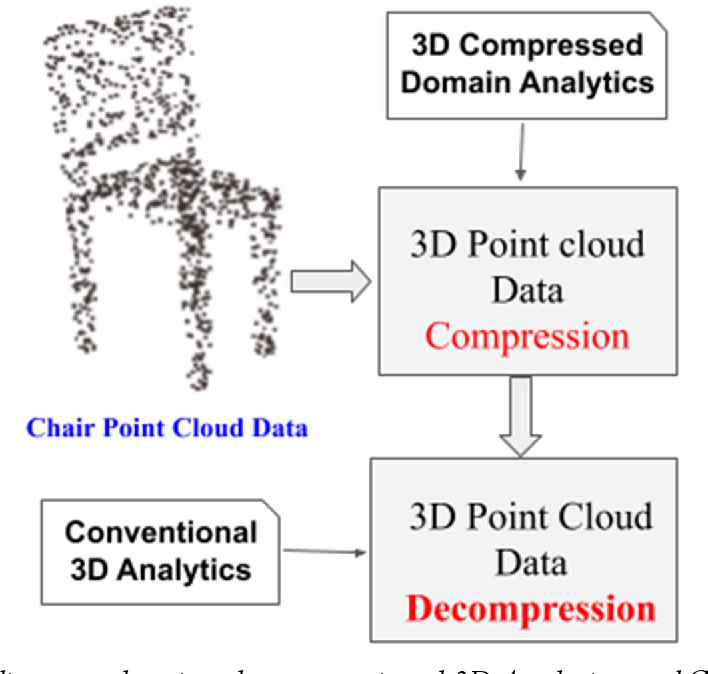 Automatic processing of 3D Point Cloud data for object detection, tracking and segmentation is the latest trending research in the field of AI and Data Science, which is specifically aimed at solving different challenges of autonomous driving cars and getting real time performance. However, the amount of data that is being produced in the form of 3D point cloud (with LiDAR) is very huge, due to which the researchers are now on the way inventing new data compression algorithms to handle huge volumes of data thus generated. However, compression on one hand has an advantage in overcoming space requirements, but on the other hand, its processing gets expensive due to the decompression, which indents additional computing resources. Therefore, it would be novel to think of developing algorithms that can operate/analyse directly with the compressed data without involving the stages of decompression and recompression (required as many times, the compressed data needs to be operated or analyzed). This research field is termed as Compressed Domain Processing. In this paper, we will quickly review few of the recent state-of-the-art developments in the area of LiDAR generated 3D point cloud data compression, and highlight the future challenges of compressed domain processing of 3D point cloud data.

SoPhie: An Attentive GAN for Predicting Paths Compliant to Social and Physical Constraints 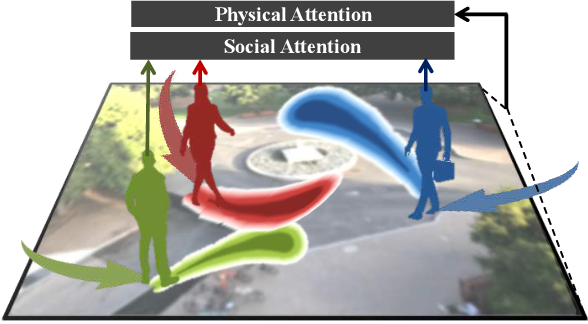 This paper addresses the problem of path prediction for multiple interacting agents in a scene, which is a crucial step for many autonomous platforms such as self-driving cars and social robots. We present \textit{SoPhie}; an interpretable framework based on Generative Adversarial Network (GAN), which leverages two sources of information, the path history of all the agents in a scene, and the scene context information, using images of the scene. To predict a future path for an agent, both physical and social information must be leveraged. Previous work has not been successful to jointly model physical and social interactions. Our approach blends a social attention mechanism with a physical attention that helps the model to learn where to look in a large scene and extract the most salient parts of the image relevant to the path. Whereas, the social attention component aggregates information across the different agent interactions and extracts the most important trajectory information from the surrounding neighbors. SoPhie also takes advantage of GAN to generates more realistic samples and to capture the uncertain nature of the future paths by modeling its distribution. All these mechanisms enable our approach to predict socially and physically plausible paths for the agents and to achieve state-of-the-art performance on several different trajectory forecasting benchmarks. 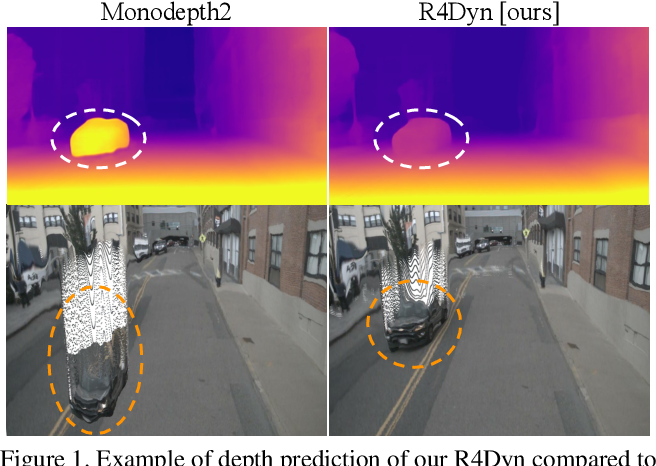 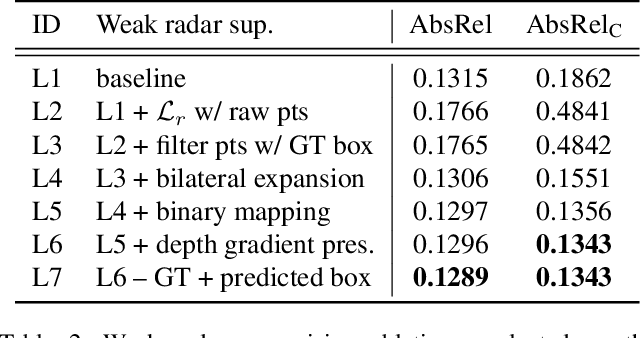 While self-supervised monocular depth estimation in driving scenarios has achieved comparable performance to supervised approaches, violations of the static world assumption can still lead to erroneous depth predictions of traffic participants, posing a potential safety issue. In this paper, we present R4Dyn, a novel set of techniques to use cost-efficient radar data on top of a self-supervised depth estimation framework. In particular, we show how radar can be used during training as weak supervision signal, as well as an extra input to enhance the estimation robustness at inference time. Since automotive radars are readily available, this allows to collect training data from a variety of existing vehicles. Moreover, by filtering and expanding the signal to make it compatible with learning-based approaches, we address radar inherent issues, such as noise and sparsity. With R4Dyn we are able to overcome a major limitation of self-supervised depth estimation, i.e. the prediction of traffic participants. We substantially improve the estimation on dynamic objects, such as cars by 37% on the challenging nuScenes dataset, hence demonstrating that radar is a valuable additional sensor for monocular depth estimation in autonomous vehicles. Additionally, we plan on making the code publicly available. 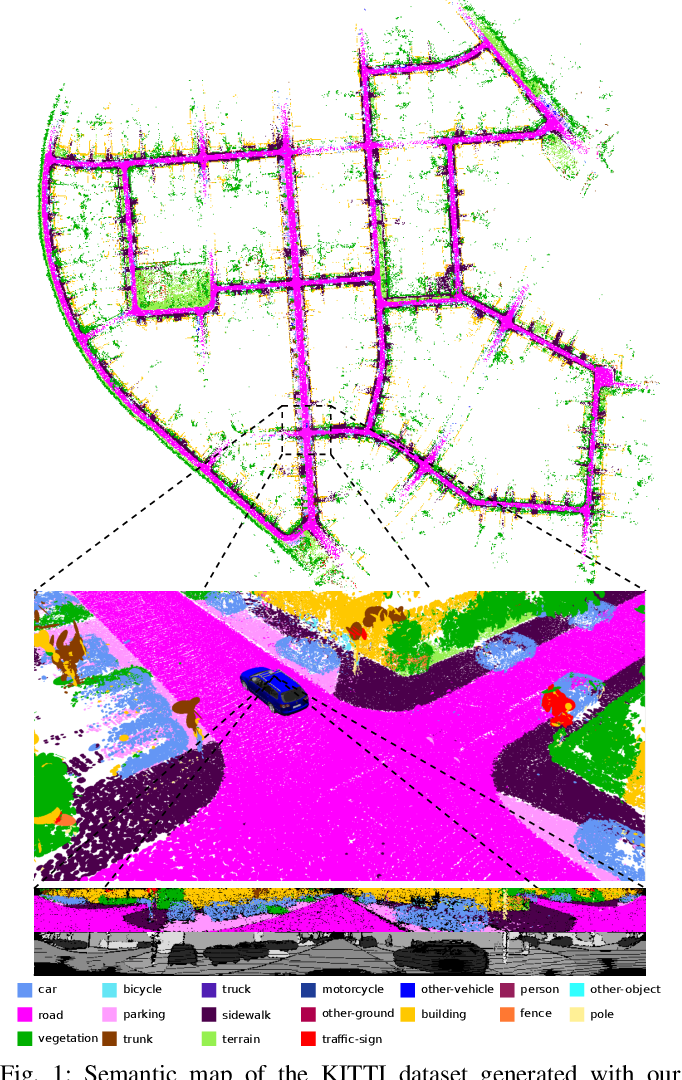 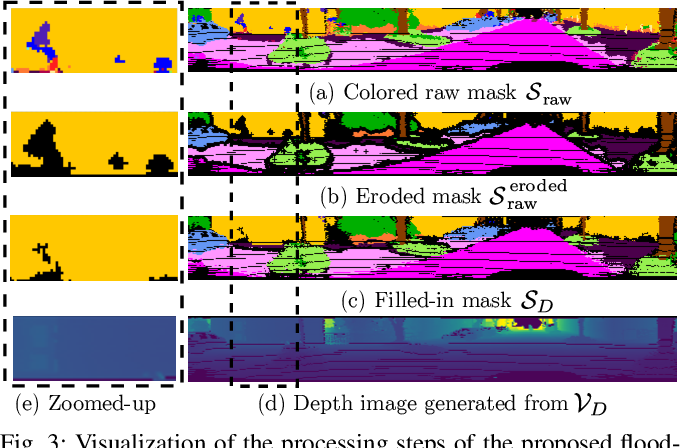 Reliable and accurate localization and mapping are key components of most autonomous systems. Besides geometric information about the mapped environment, the semantics plays an important role to enable intelligent navigation behaviors. In most realistic environments, this task is particularly complicated due to dynamics caused by moving objects, which can corrupt the mapping step or derail localization. In this paper, we propose an extension of a recently published surfel-based mapping approach exploiting three-dimensional laser range scans by integrating semantic information to facilitate the mapping process. The semantic information is efficiently extracted by a fully convolutional neural network and rendered on a spherical projection of the laser range data. This computed semantic segmentation results in point-wise labels for the whole scan, allowing us to build a semantically-enriched map with labeled surfels. This semantic map enables us to reliably filter moving objects, but also improve the projective scan matching via semantic constraints. Our experimental evaluation on challenging highways sequences from KITTI dataset with very few static structures and a large amount of moving cars shows the advantage of our semantic SLAM approach in comparison to a purely geometric, state-of-the-art approach. 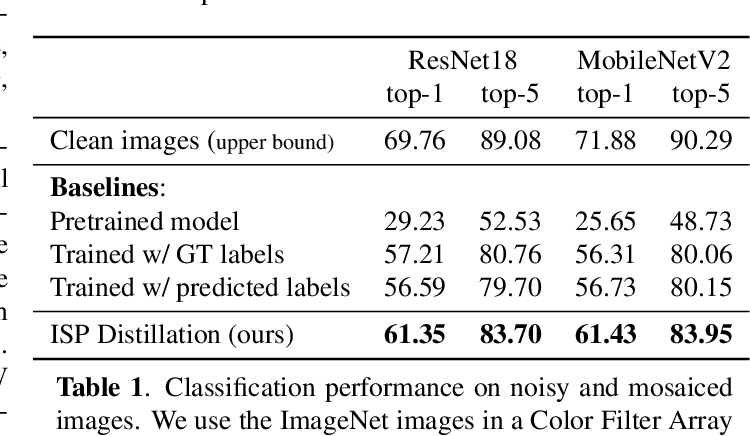 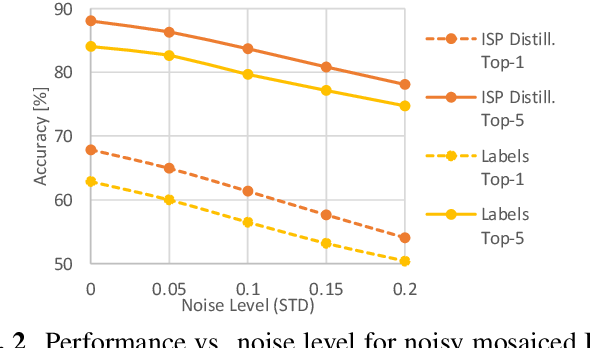 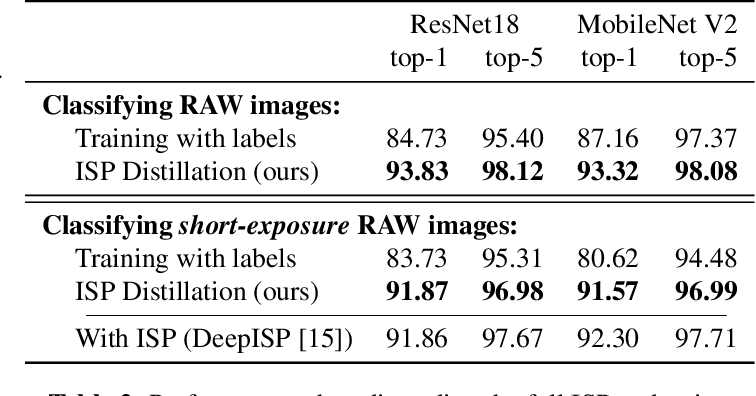 Nowadays, many of the images captured are "observed" by machines only and not by humans, for example, robots' or autonomous cars' cameras. High-level machine vision models, such as object recognition, assume images are transformed to some canonical image space by the camera ISP. However, the camera ISP is optimized for producing visually pleasing images to human observers and not for machines, thus, one may spare the ISP compute time and apply the vision models directly to the raw data. Yet, it has been shown that training such models directly on the RAW images results in a performance drop. To mitigate this drop in performance (without the need to annotate RAW data), we use a dataset of RAW and RGB image pairs, which can be easily acquired with no human labeling. We then train a model that is applied directly to the RAW data by using knowledge distillation such that the model predictions for RAW images will be aligned with the predictions of an off-the-shelf pre-trained model for processed RGB images. Our experiments show that our performance on RAW images is significantly better than a model trained on labeled RAW images. It also reasonably matches the predictions of a pre-trained model on processed RGB images, while saving the ISP compute overhead. 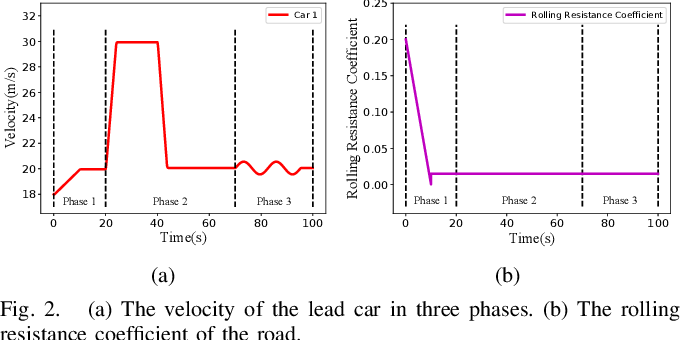 Safety and tracking stability are crucial for safety-critical systems such as self-driving cars, autonomous mobile robots, industrial manipulators. To efficiently control safety-critical systems to ensure their safety and achieve tracking stability, accurate system dynamic models are usually required. However, accurate system models are not always available in practice. In this paper, a learning-based safety-stability-driven control (LBSC) algorithm is presented to guarantee the safety and tracking stability for nonlinear safety-critical systems subject to control input constraints under model uncertainties. Gaussian Processes (GPs) are employed to learn the model error between the nominal model and the actual system dynamics, and the estimated mean and variance of the model error are used to quantify a high-confidence uncertainty bound. Using this estimated uncertainty bound, a safety barrier constraint is devised to ensure safety, and a stability constraint is developed to achieve rapid and accurate tracking. Then the proposed LBSC method is formulated as a quadratic program incorporating the safety barrier, the stability constraint, and the control constraints. The effectiveness of the LBSC method is illustrated on the safety-critical connected cruise control (CCC) system simulator under model uncertainties.