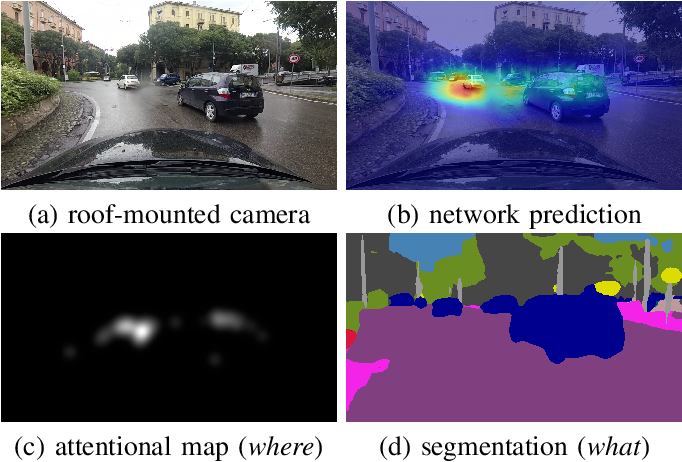 Despite the advent of autonomous cars, it's likely - at least in the near future - that human attention will still maintain a central role as a guarantee in terms of legal responsibility during the driving task. In this paper we study the dynamics of the driver's gaze and use it as a proxy to understand related attentional mechanisms. First, we build our analysis upon two questions: where and what the driver is looking at? Second, we model the driver's gaze by training a coarse-to-fine convolutional network on short sequences extracted from the DR(eye)VE dataset. Experimental comparison against different baselines reveal that the driver's gaze can indeed be learnt to some extent, despite i) being highly subjective and ii) having only one driver's gaze available for each sequence due to the irreproducibility of the scene. Eventually, we advocate for a new assisted driving paradigm which suggests to the driver, with no intervention, where she should focus her attention.

Understanding human motion behavior is critical for autonomous moving platforms (like self-driving cars and social robots) if they are to navigate human-centric environments. This is challenging because human motion is inherently multimodal: given a history of human motion paths, there are many socially plausible ways that people could move in the future. We tackle this problem by combining tools from sequence prediction and generative adversarial networks: a recurrent sequence-to-sequence model observes motion histories and predicts future behavior, using a novel pooling mechanism to aggregate information across people. We predict socially plausible futures by training adversarially against a recurrent discriminator, and encourage diverse predictions with a novel variety loss. Through experiments on several datasets we demonstrate that our approach outperforms prior work in terms of accuracy, variety, collision avoidance, and computational complexity. 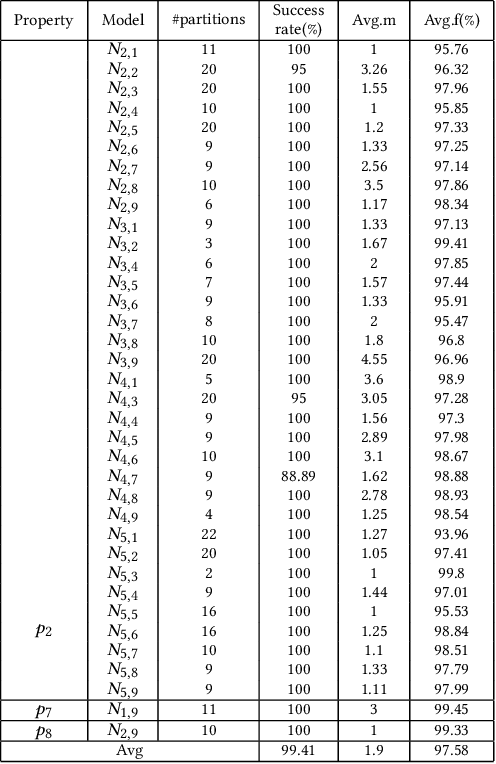 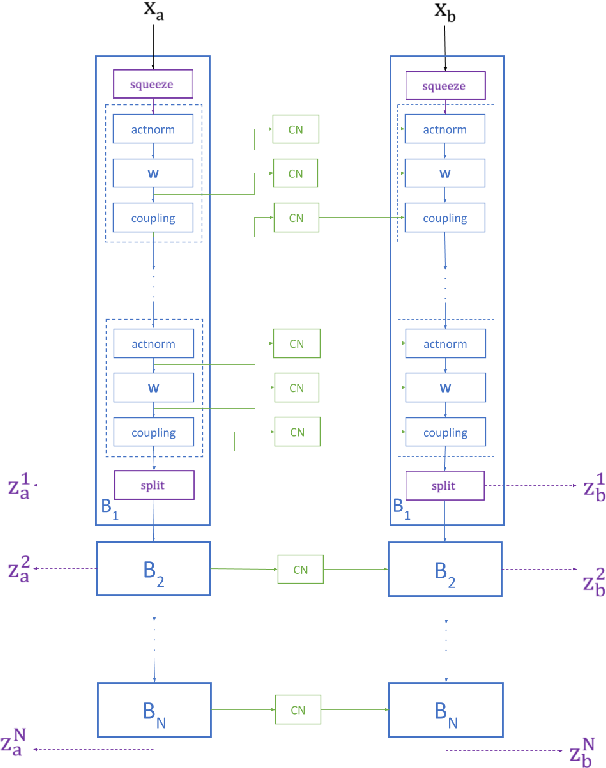 Autonomous agents, such as driverless cars, require large amounts of labeled visual data for their training. A viable approach for acquiring such data is training a generative model with collected real data, and then augmenting the collected real dataset with synthetic images from the model, generated with control of the scene layout and ground truth labeling. In this paper we propose Full-Glow, a fully conditional Glow-based architecture for generating plausible and realistic images of novel street scenes given a semantic segmentation map indicating the scene layout. Benchmark comparisons show our model to outperform recent works in terms of the semantic segmentation performance of a pretrained PSPNet. This indicates that images from our model are, to a higher degree than from other models, similar to real images of the same kinds of scenes and objects, making them suitable as training data for a visual semantic segmentation or object recognition system. 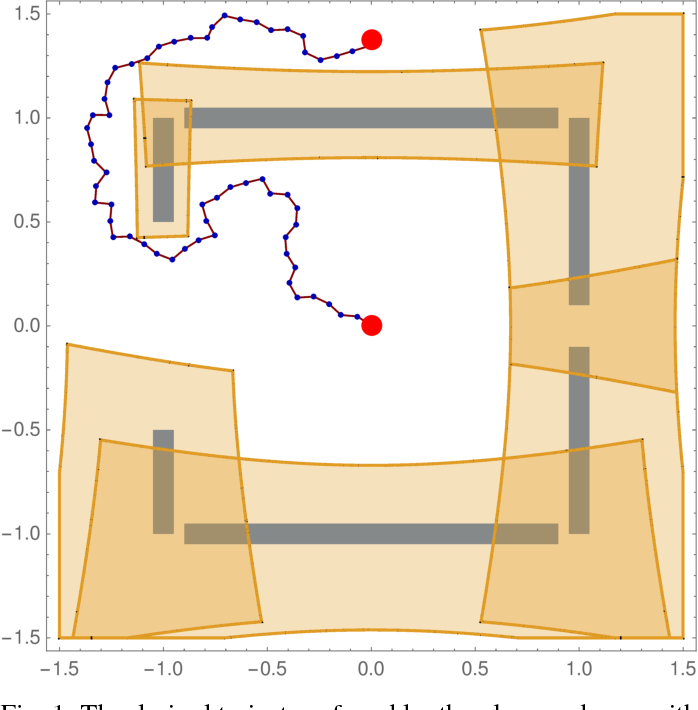 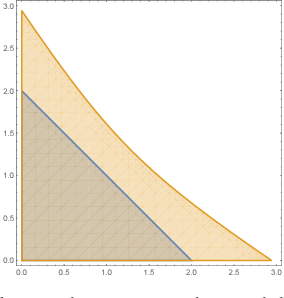 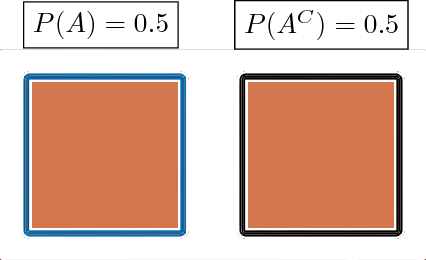 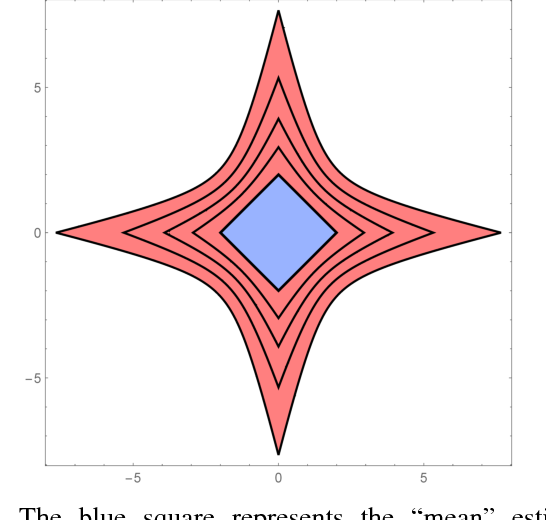 As drones and autonomous cars become more widespread it is becoming increasingly important that robots can operate safely under realistic conditions. The noisy information fed into real systems means that robots must use estimates of the environment to plan navigation. Efficiently guaranteeing that the resulting motion plans are safe under these circumstances has proved difficult. We examine how to guarantee that a trajectory or policy is safe with only imperfect observations of the environment. We examine the implications of various mathematical formalisms of safety and arrive at a mathematical notion of safety of a long-term execution, even when conditioned on observational information. We present efficient algorithms that can prove that trajectories or policies are safe with much tighter bounds than in previous work. Notably, the complexity of the environment does not affect our methods ability to evaluate if a trajectory or policy is safe. We then use these safety checking methods to design a safe variant of the RRT planning algorithm.

Deep Tracking on the Move: Learning to Track the World from a Moving Vehicle using Recurrent Neural Networks 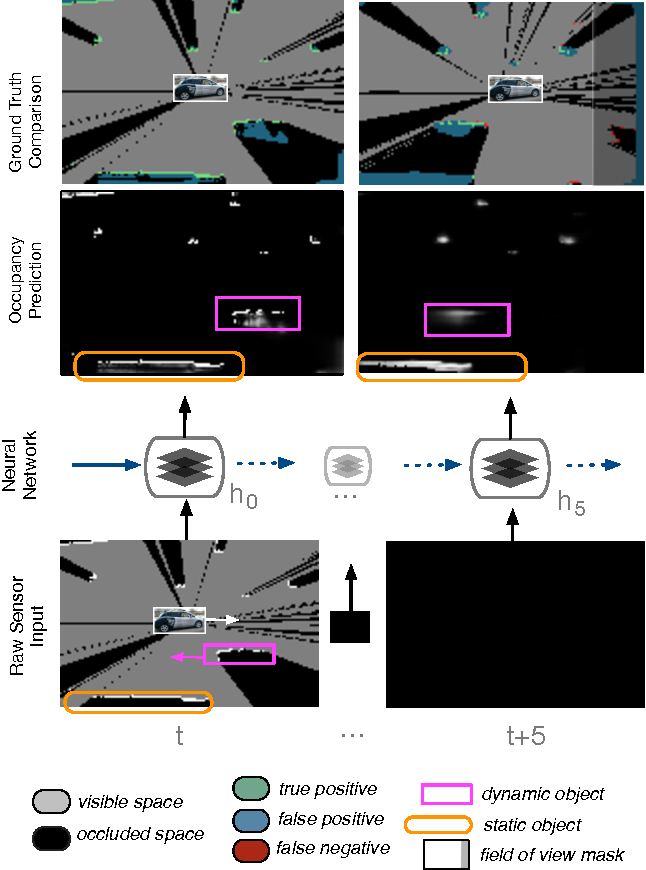 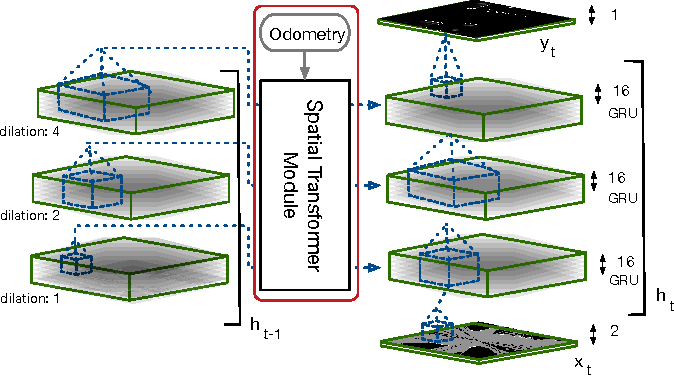 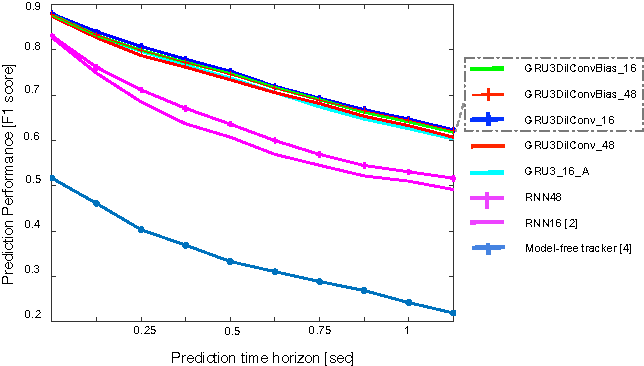 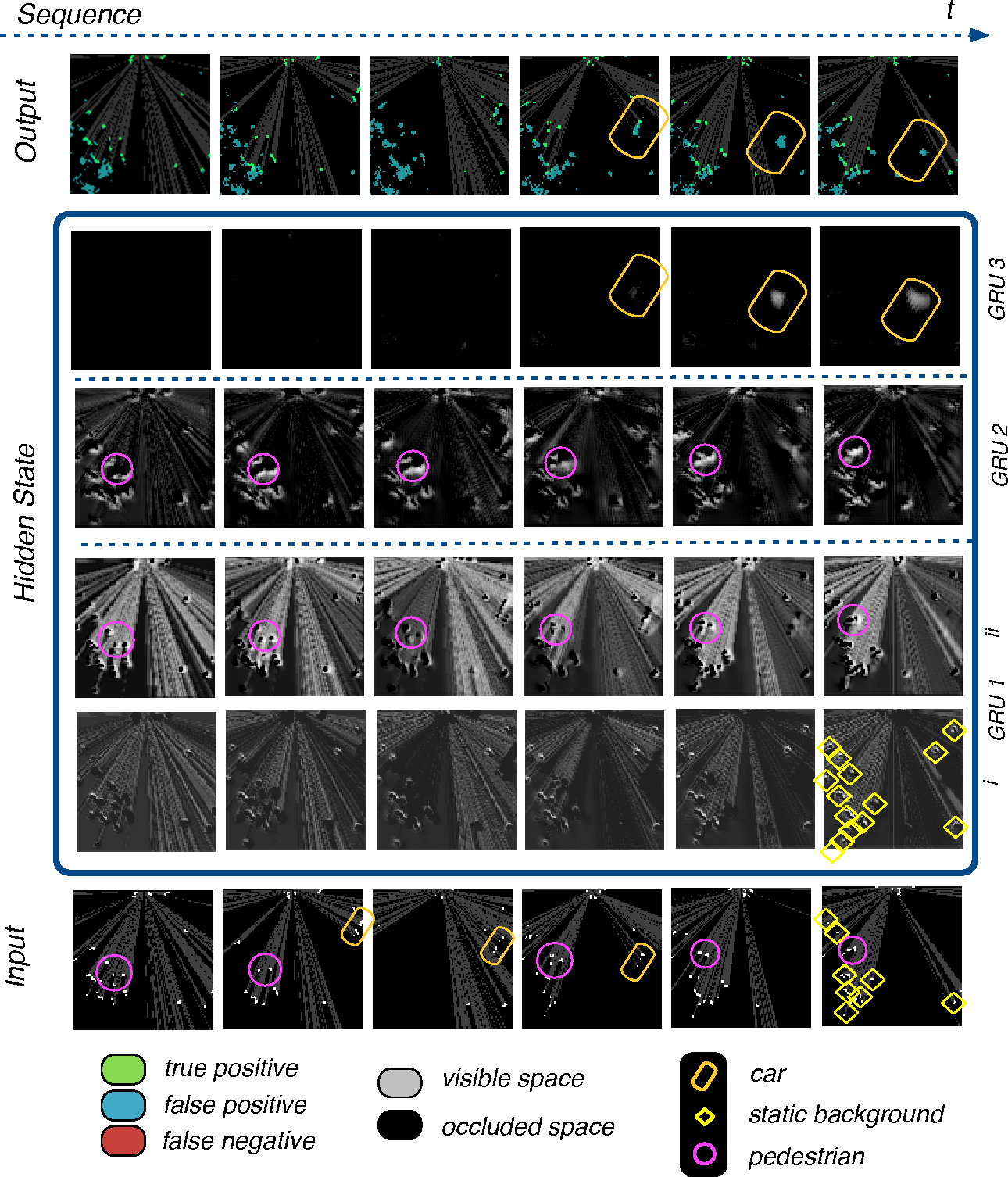 This paper presents an end-to-end approach for tracking static and dynamic objects for an autonomous vehicle driving through crowded urban environments. Unlike traditional approaches to tracking, this method is learned end-to-end, and is able to directly predict a full unoccluded occupancy grid map from raw laser input data. Inspired by the recently presented DeepTracking approach [Ondruska, 2016], we employ a recurrent neural network (RNN) to capture the temporal evolution of the state of the environment, and propose to use Spatial Transformer modules to exploit estimates of the egomotion of the vehicle. Our results demonstrate the ability to track a range of objects, including cars, buses, pedestrians, and cyclists through occlusion, from both moving and stationary platforms, using a single learned model. Experimental results demonstrate that the model can also predict the future states of objects from current inputs, with greater accuracy than previous work.

Hindsight is 20/20: Leveraging Past Traversals to Aid 3D Perception 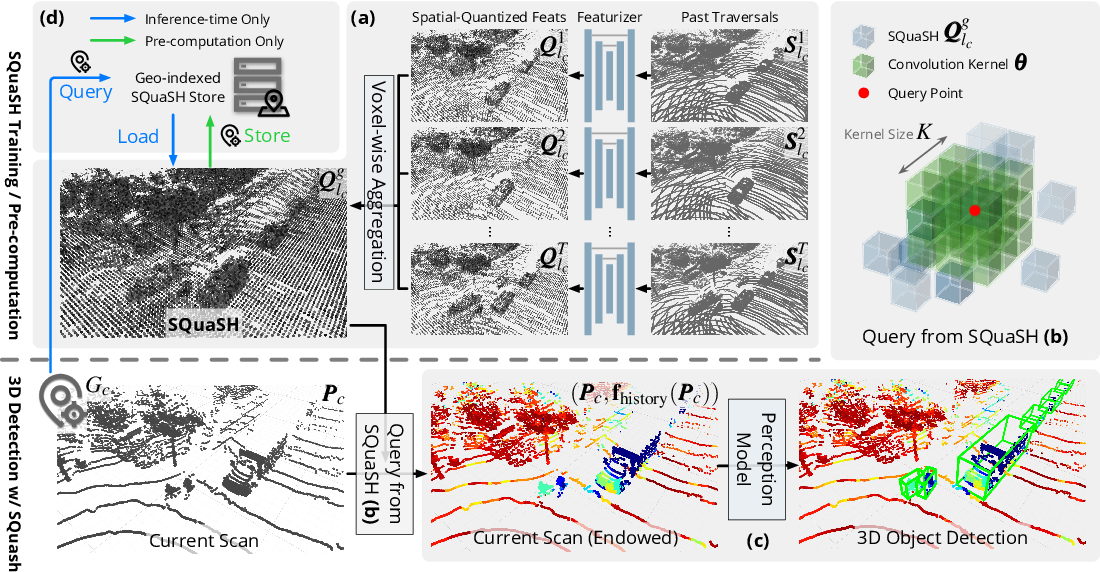 Self-driving cars must detect vehicles, pedestrians, and other traffic participants accurately to operate safely. Small, far-away, or highly occluded objects are particularly challenging because there is limited information in the LiDAR point clouds for detecting them. To address this challenge, we leverage valuable information from the past: in particular, data collected in past traversals of the same scene. We posit that these past data, which are typically discarded, provide rich contextual information for disambiguating the above-mentioned challenging cases. To this end, we propose a novel, end-to-end trainable Hindsight framework to extract this contextual information from past traversals and store it in an easy-to-query data structure, which can then be leveraged to aid future 3D object detection of the same scene. We show that this framework is compatible with most modern 3D detection architectures and can substantially improve their average precision on multiple autonomous driving datasets, most notably by more than 300% on the challenging cases.


* Accepted by ICLR 2022. Code is available at https://github.com/YurongYou/Hindsight 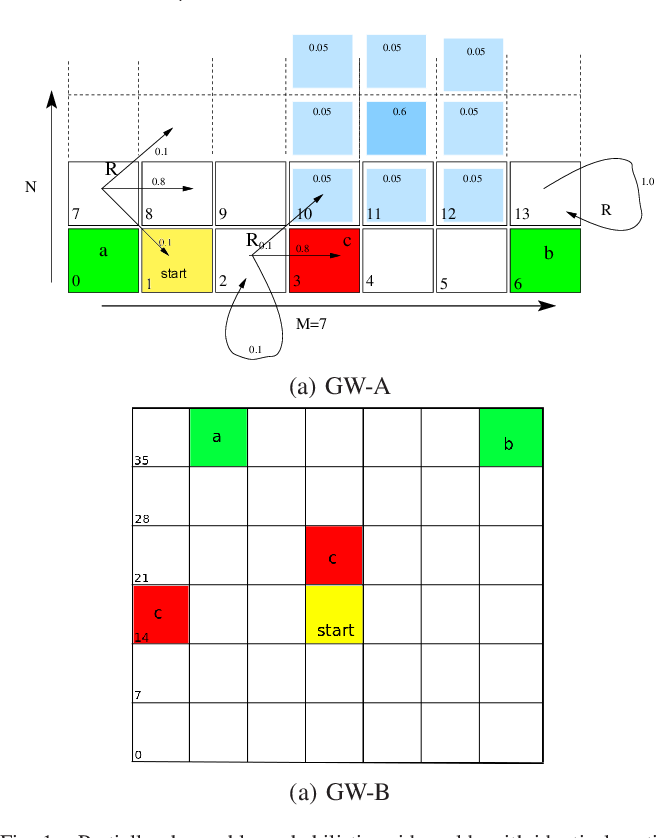 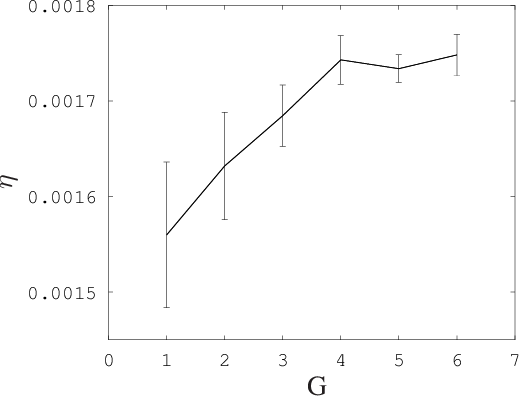 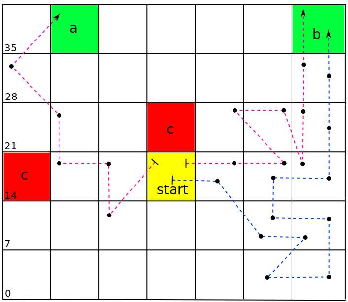 Partially observable Markov decision processes (POMDPs) provide a modeling framework for autonomous decision making under uncertainty and imperfect sensing, e.g. robot manipulation and self-driving cars. However, optimal control of POMDPs is notoriously intractable. This paper considers the quantitative problem of synthesizing sub-optimal stochastic finite state controllers (sFSCs) for POMDPs such that the probability of satisfying a set of high-level specifications in terms of linear temporal logic (LTL) formulae is maximized. We begin by casting the latter problem into an optimization and use relaxations based on the Poisson equation and McCormick envelopes. Then, we propose an stochastic bounded policy iteration algorithm, leading to a controlled growth in sFSC size and an any time algorithm, where the performance of the controller improves with successive iterations, but can be stopped by the user based on time or memory considerations. We illustrate the proposed method by a robot navigation case study. 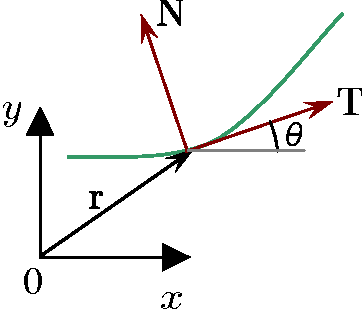 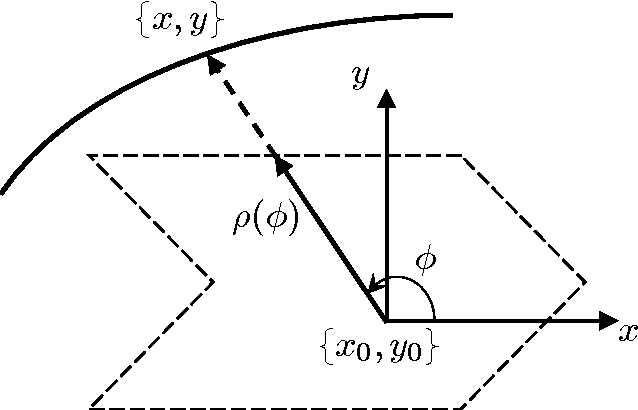 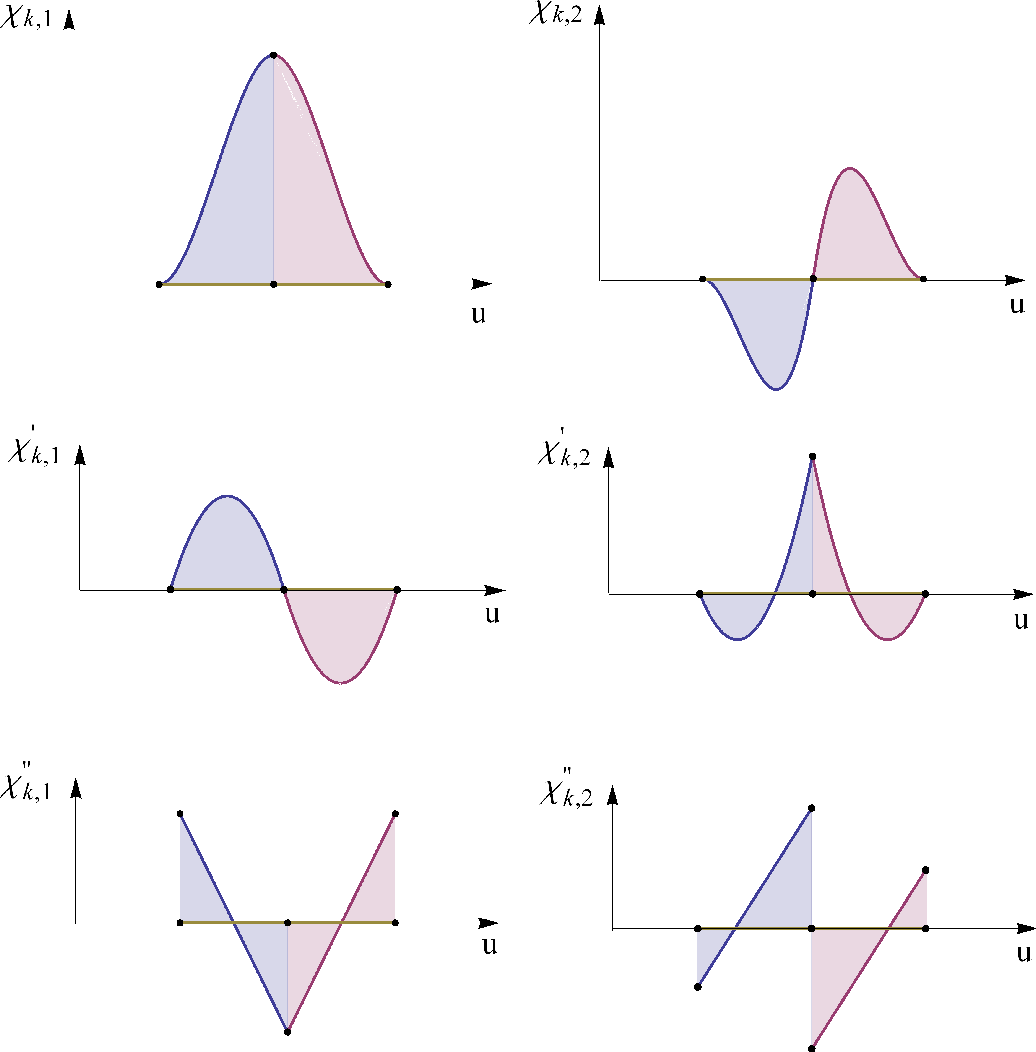 In this series of papers, we present a motion planning framework for planning comfortable and customizable motion of nonholonomic mobile robots such as intelligent wheelchairs and autonomous cars. In Part I, we presented the mathematical foundation of our framework, where we model motion discomfort as a weighted cost functional and define comfortable motion planning as a nonlinear constrained optimization problem of computing trajectories that minimize this discomfort given the appropriate boundary conditions and constraints. In this paper, we discretize the infinite-dimensional optimization problem using conforming finite elements. We describe shape functions to handle different kinds of boundary conditions and the choice of unknowns to obtain a sparse Hessian matrix. We also describe in detail how any trajectory computation problem can have infinitely many locally optimal solutions and our method of handling them. Additionally, since we have a nonlinear and constrained problem, computation of high quality initial guesses is crucial for efficient solution. We show how to compute them. 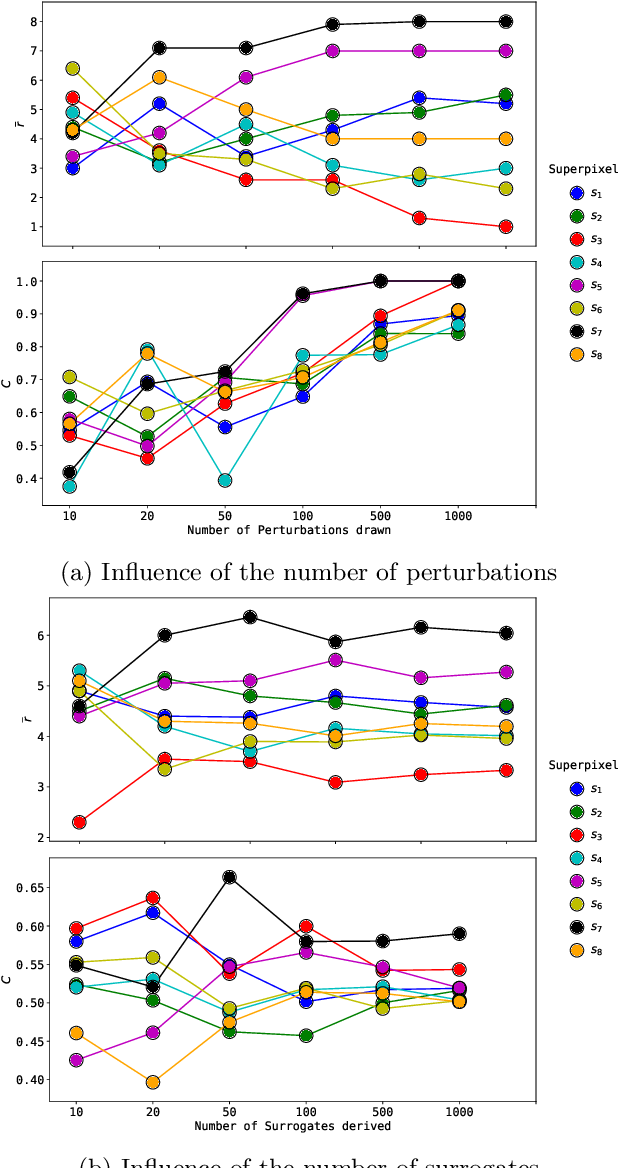 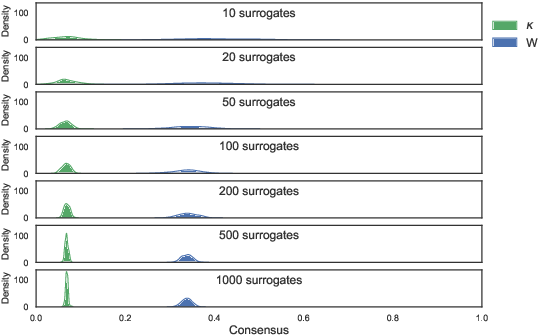 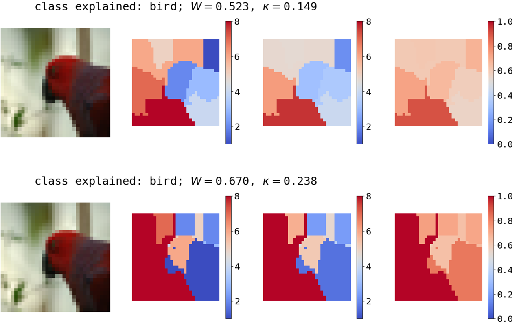 Explainability of black-box machine learning models is crucial, in particular when deployed in critical applications such as medicine or autonomous cars. Existing approaches produce explanations for the predictions of models, however, how to assess the quality and reliability of such explanations remains an open question. In this paper we take a step further in order to provide the practitioner with tools to judge the trustworthiness of an explanation. To this end, we produce estimates of the uncertainty of a given explanation by measuring the ordinal consensus amongst a set of diverse bootstrapped surrogate explainers. While we encourage diversity by using ensemble techniques, we propose and analyse metrics to aggregate the information contained within the set of explainers through a rating scheme. We empirically illustrate the properties of this approach through experiments on state-of-the-art Convolutional Neural Network ensembles. Furthermore, through tailored visualisations, we show specific examples of situations where uncertainty estimates offer concrete actionable insights to the user beyond those arising from standard surrogate explainers.