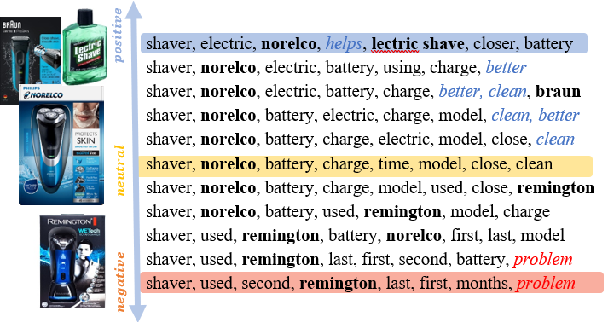 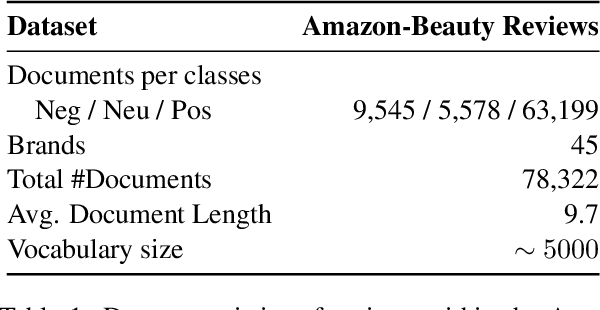 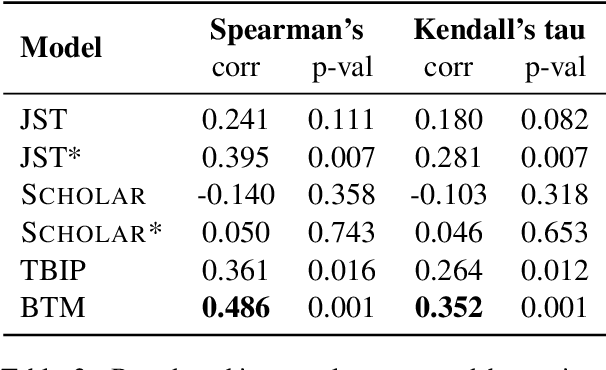 In this paper, we propose the Brand-Topic Model (BTM) which aims to detect brand-associated polarity-bearing topics from product reviews. Different from existing models for sentiment-topic extraction which assume topics are grouped under discrete sentiment categories such as `positive', `negative' and `neural', BTM is able to automatically infer real-valued brand-associated sentiment scores and generate fine-grained sentiment-topics in which we can observe continuous changes of words under a certain topic (e.g., `shaver' or `cream') while its associated sentiment gradually varies from negative to positive. BTM is built on the Poisson factorisation model with the incorporation of adversarial learning. It has been evaluated on a dataset constructed from Amazon reviews. Experimental results show that BTM outperforms a number of competitive baselines in brand ranking, achieving a better balance of topic coherence and uniqueness, and extracting better-separated polarity-bearing topics. 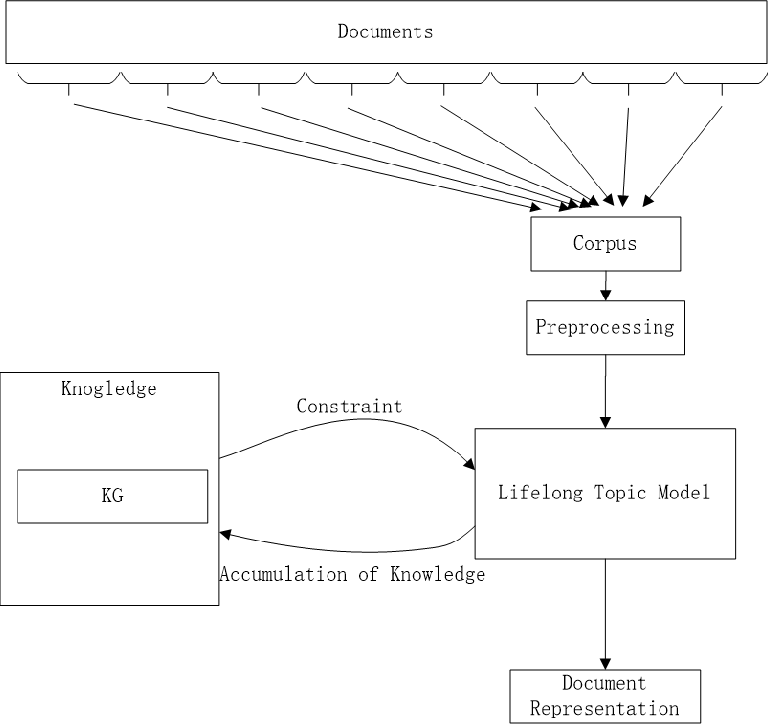 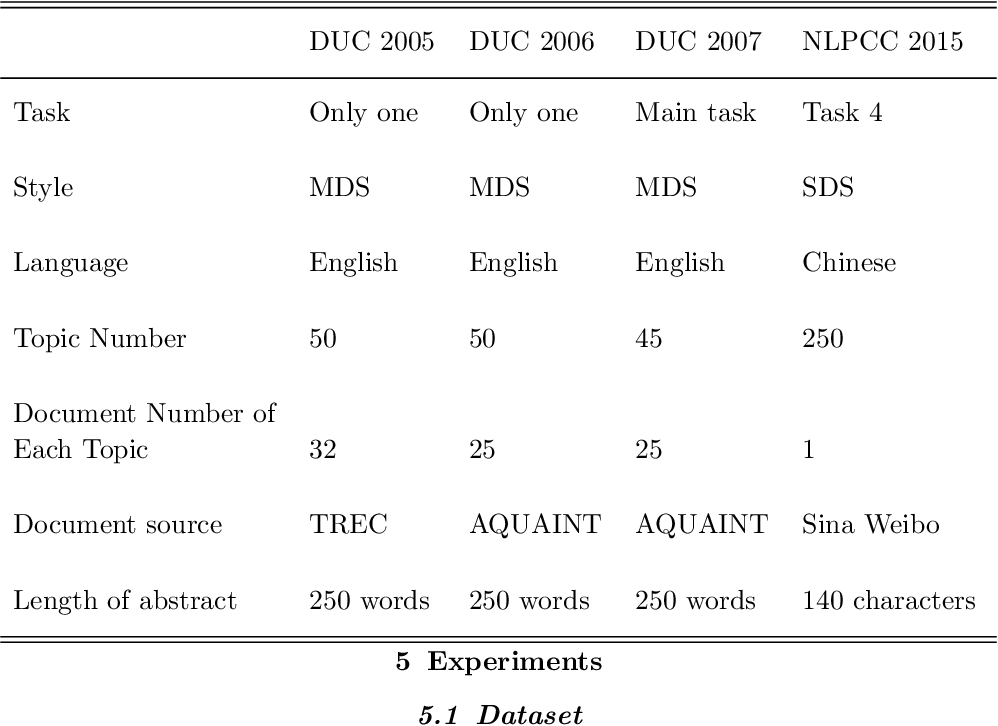 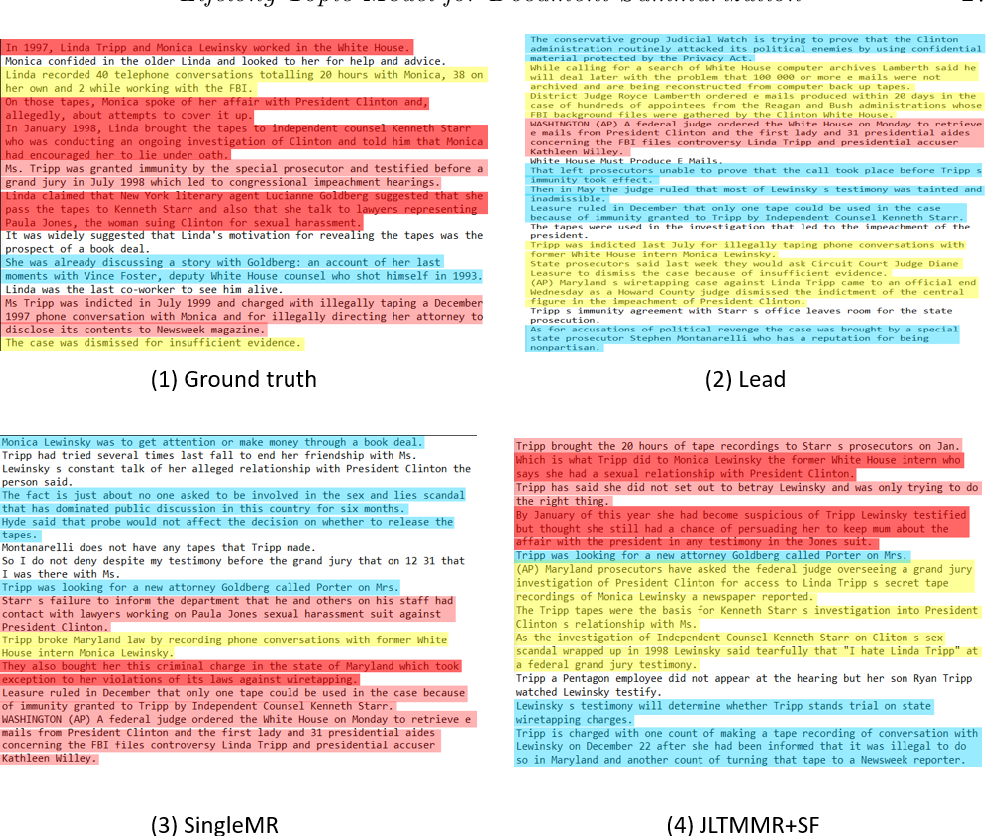 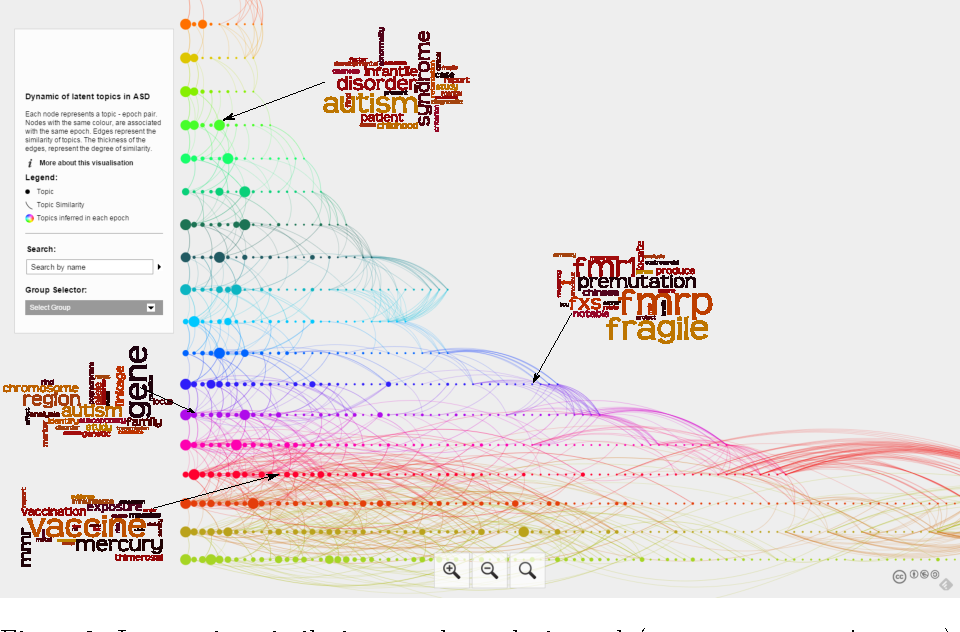 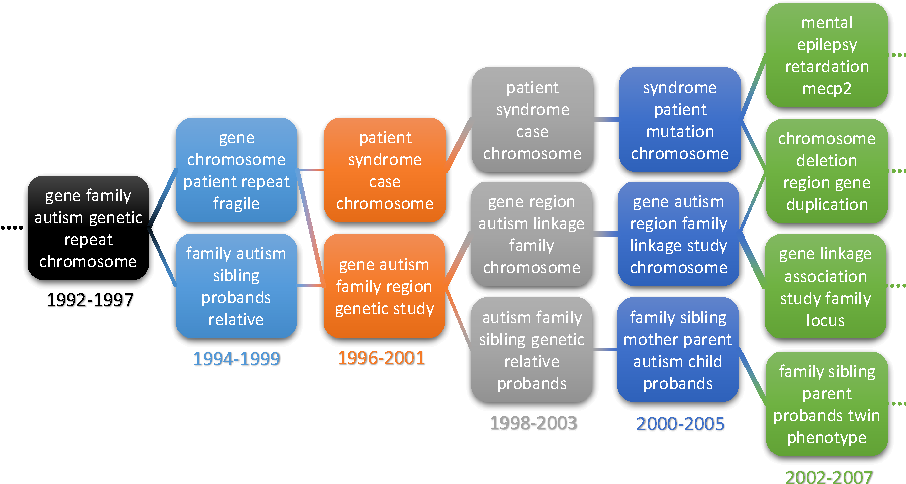 In this paper we describe a novel framework for the discovery of the topical content of a data corpus, and the tracking of its complex structural changes across the temporal dimension. In contrast to previous work our model does not impose a prior on the rate at which documents are added to the corpus nor does it adopt the Markovian assumption which overly restricts the type of changes that the model can capture. Our key technical contribution is a framework based on (i) discretization of time into epochs, (ii) epoch-wise topic discovery using a hierarchical Dirichlet process-based model, and (iii) a temporal similarity graph which allows for the modelling of complex topic changes: emergence and disappearance, evolution, and splitting and merging. The power of the proposed framework is demonstrated on the medical literature corpus concerned with the autism spectrum disorder (ASD) - an increasingly important research subject of significant social and healthcare importance. In addition to the collected ASD literature corpus which we will make freely available, our contributions also include two free online tools we built as aids to ASD researchers. These can be used for semantically meaningful navigation and searching, as well as knowledge discovery from this large and rapidly growing corpus of literature. 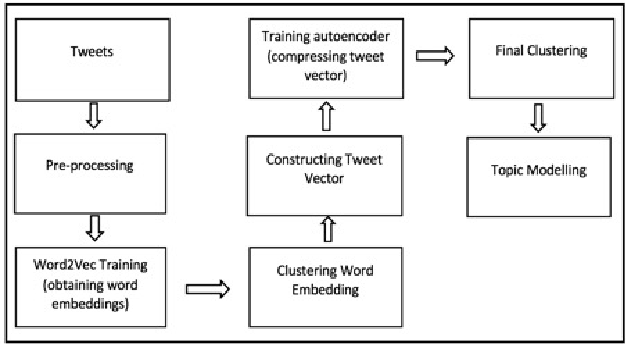 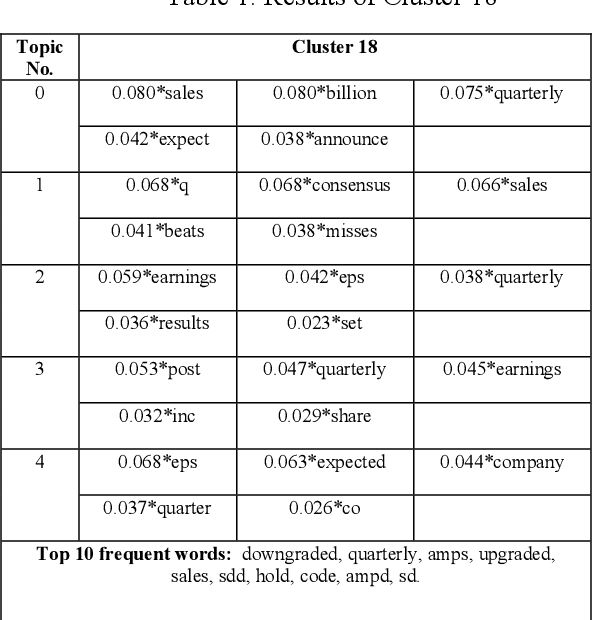 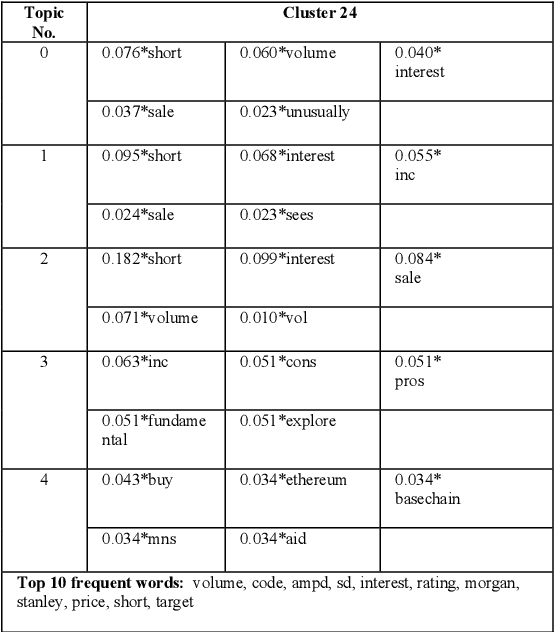 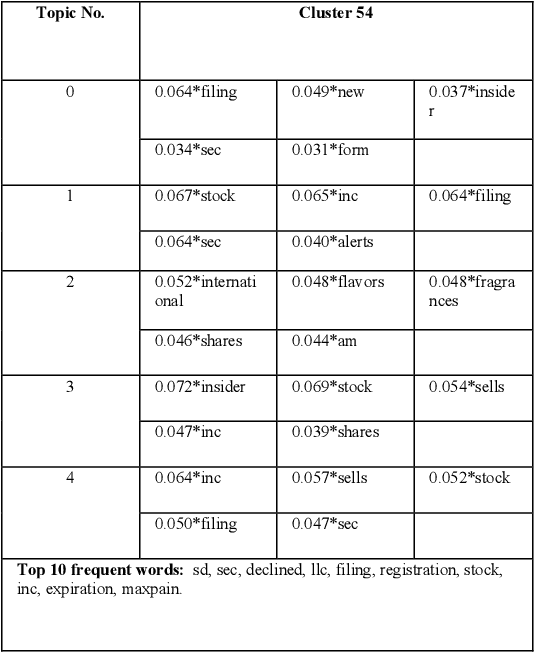 Financial analyses of stock markets rely heavily on quantitative approaches in an attempt to predict subsequent or market movements based on historical prices and other measurable metrics. These quantitative analyses might have missed out on un-quantifiable aspects like sentiment and speculation that also impact the market. Analyzing vast amounts of qualitative text data to understand public opinion on social media platform is one approach to address this gap. This work carried out topic analysis on 28264 financial tweets [1] via clustering to discover emerging events in the stock market. Three main topics were discovered to be discussed frequently within the period. First, the financial ratio EPS is a measure that has been discussed frequently by investors. Secondly, short selling of shares were discussed heavily, it was often mentioned together with Morgan Stanley. Thirdly, oil and energy sectors were often discussed together with policy. These tweets were semantically clustered by a method consisting of word2vec algorithm to obtain word embeddings that map words to vectors. Semantic word clusters were then formed. Each tweet was then vectorized using the Term Frequency-Inverse Document Frequency (TF-IDF) values of the words it consisted of and based on which clusters its words were in. Tweet vectors were then converted to compressed representations by training a deep-autoencoder. K-means clusters were then formed. This method reduces dimensionality and produces dense vectors, in contrast to the usual Vector Space Model. Topic modelling with Latent Dirichlet Allocation (LDA) and top frequent words were used to analyze clusters and reveal emerging events. 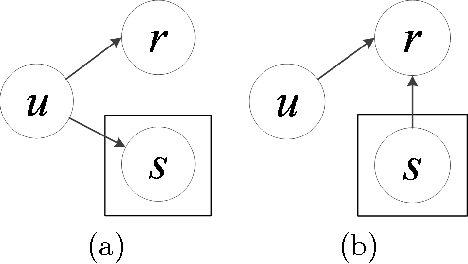 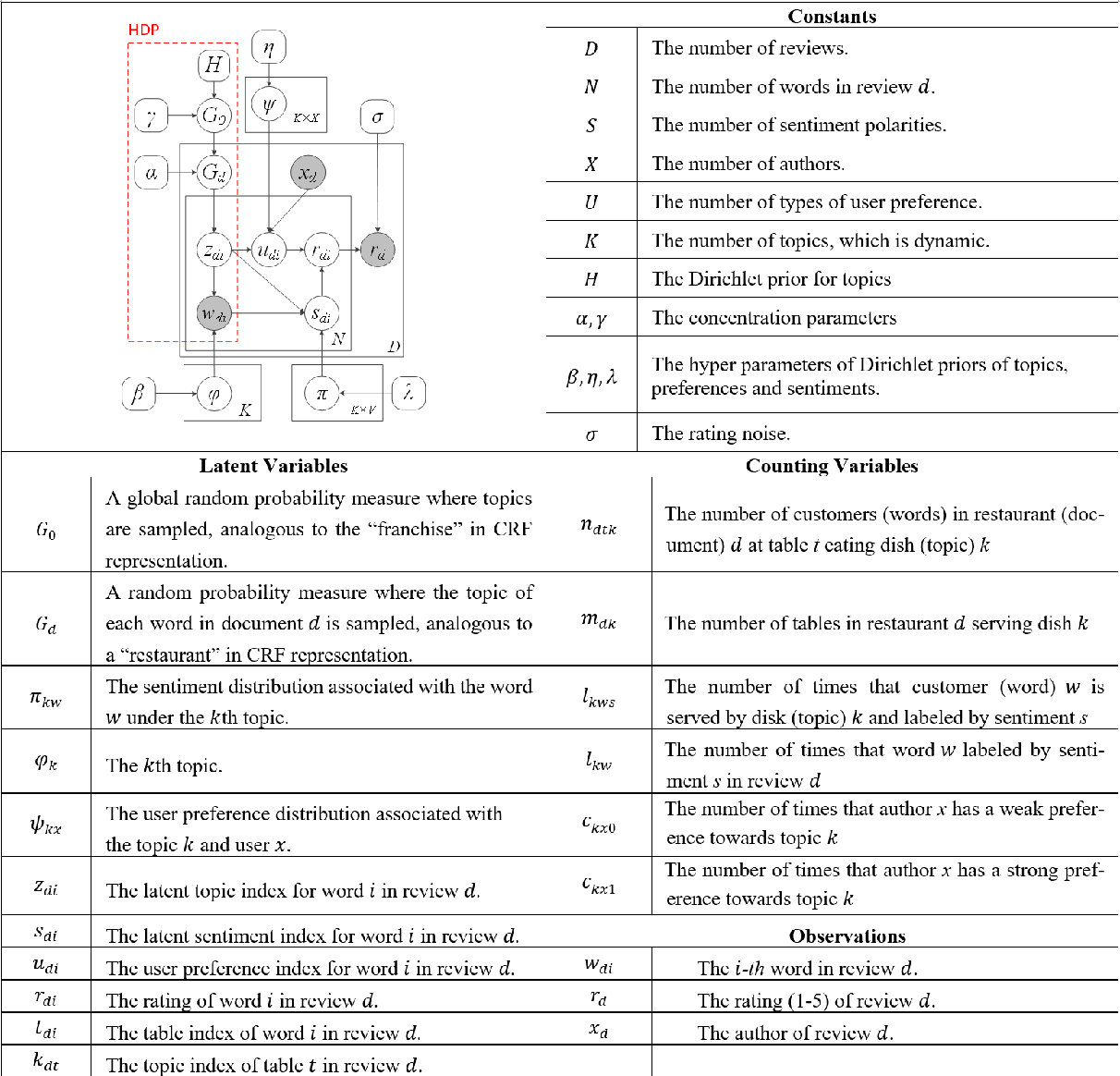 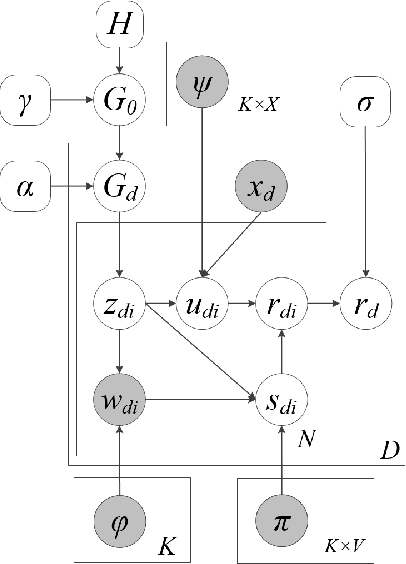 This paper proposes a new HDP based online review rating regression model named Topic-Sentiment-Preference Regression Analysis (TSPRA). TSPRA combines topics (i.e. product aspects), word sentiment and user preference as regression factors, and is able to perform topic clustering, review rating prediction, sentiment analysis and what we invent as "critical aspect" analysis altogether in one framework. TSPRA extends sentiment approaches by integrating the key concept "user preference" in collaborative filtering (CF) models into consideration, while it is distinct from current CF models by decoupling "user preference" and "sentiment" as independent factors. Our experiments conducted on 22 Amazon datasets show overwhelming better performance in rating predication against a state-of-art model FLAME (2015) in terms of error, Pearson's Correlation and number of inverted pairs. For sentiment analysis, we compare the derived word sentiments against a public sentiment resource SenticNet3 and our sentiment estimations clearly make more sense in the context of online reviews. Last, as a result of the de-correlation of "user preference" from "sentiment", TSPRA is able to evaluate a new concept "critical aspects", defined as the product aspects seriously concerned by users but negatively commented in reviews. Improvement to such "critical aspects" could be most effective to enhance user experience. 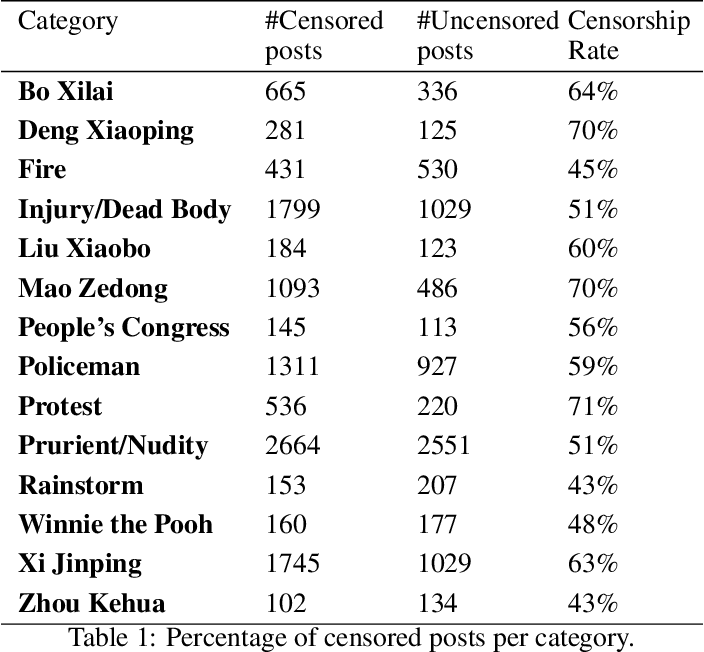 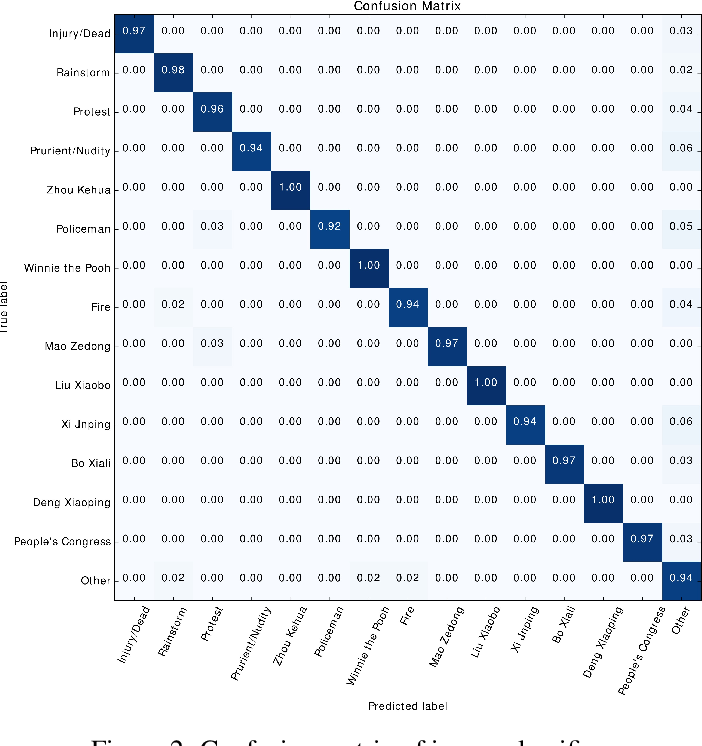 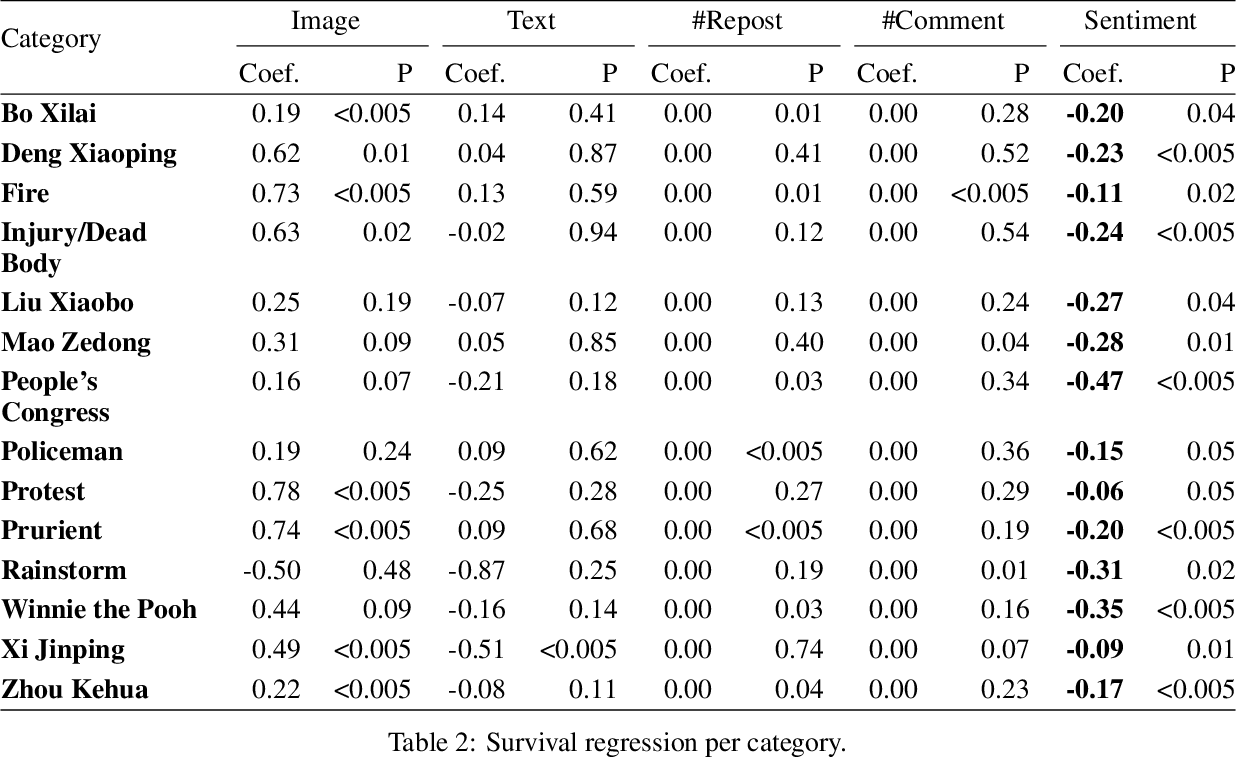 Widespread Chinese social media applications such as Weibo are widely known for monitoring and deleting posts to conform to Chinese government requirements. In this paper, we focus on analyzing a dataset of censored and uncensored posts in Weibo. Despite previous work that only considers text content of posts, we take a multi-modal approach that takes into account both text and image content. We categorize this dataset into 14 categories that have the potential to be censored on Weibo, and seek to quantify censorship by topic. Specifically, we investigate how different factors interact to affect censorship. We also investigate how consistently and how quickly different topics are censored. To this end, we have assembled an image dataset with 18,966 images, as well as a text dataset with 994 posts from 14 categories. We then utilized deep learning, CNN localization, and NLP techniques to analyze the target dataset and extract categories, for further analysis to better understand censorship mechanisms in Weibo. We found that sentiment is the only indicator of censorship that is consistent across the variety of topics we identified. Our finding matches with recently leaked logs from Sina Weibo. We also discovered that most categories like those related to anti-government actions (e.g. protest) or categories related to politicians (e.g. Xi Jinping) are often censored, whereas some categories such as crisis-related categories (e.g. rainstorm) are less frequently censored. We also found that censored posts across all categories are deleted in three hours on average.

Traditional works on community detection from observations of information cascade assume that a single adjacency matrix parametrizes all the observed cascades. However, in reality the connection structure usually does not stay the same across cascades. For example, different people have different topics of interest, therefore the connection structure would depend on the information/topic content of the cascade. In this paper we consider the case where we observe a sequence of noisy adjacency matrices triggered by information/events with different topic distributions. We propose a novel latent model using the intuition that the connection is more likely to exist between two nodes if they are interested in similar topics, which are common with the information/event. Specifically, we endow each node two node-topic vectors: an influence vector that measures how much influential/authoritative they are on each topic; and a receptivity vector that measures how much receptive/susceptible they are to each topic. We show how these two node-topic structures can be estimated from observed adjacency matrices with theoretical guarantee, in cases where the topic distributions of the information/events are known, as well as when they are unknown. Extensive experiments on synthetic and real data demonstrate the effectiveness of our model. 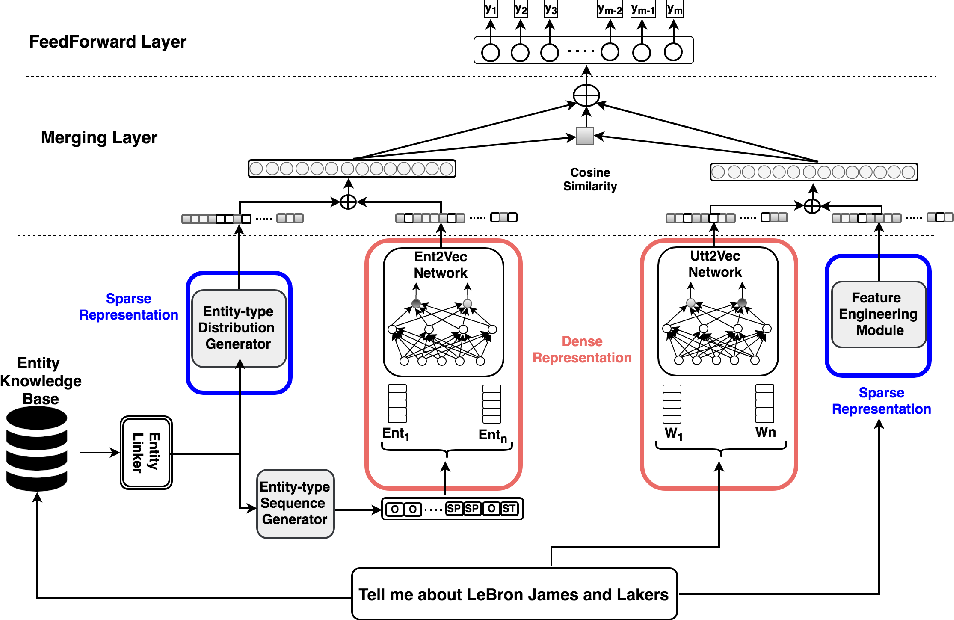 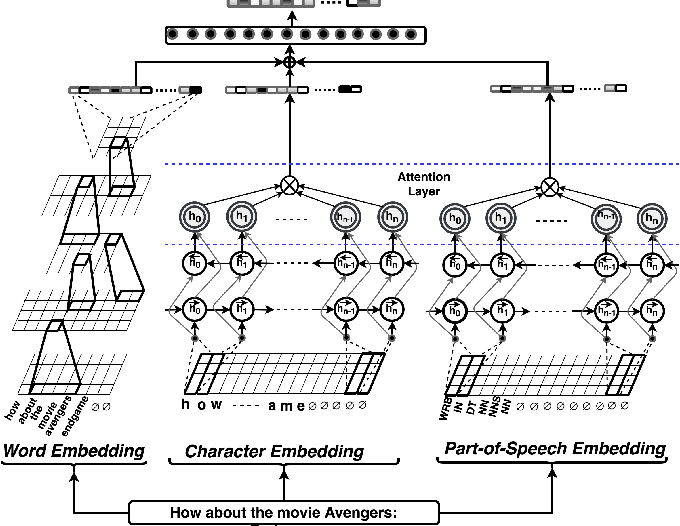 Identifying the topic (domain) of each user's utterance in open-domain conversational systems is a crucial step for all subsequent language understanding and response tasks. In particular, for complex domains, an utterance is often routed to a single component responsible for that domain. Thus, correctly mapping a user utterance to the right domain is critical. To address this problem, we introduce ConCET: a Concurrent Entity-aware conversational Topic classifier, which incorporates entity-type information together with the utterance content features. Specifically, ConCET utilizes entity information to enrich the utterance representation, combining character, word, and entity-type embeddings into a single representation. However, for rich domains with millions of available entities, unrealistic amounts of labeled training data would be required. To complement our model, we propose a simple and effective method for generating synthetic training data, to augment the typically limited amounts of labeled training data, using commonly available knowledge bases to generate additional labeled utterances. We extensively evaluate ConCET and our proposed training method first on an openly available human-human conversational dataset called Self-Dialogue, to calibrate our approach against previous state-of-the-art methods; second, we evaluate ConCET on a large dataset of human-machine conversations with real users, collected as part of the Amazon Alexa Prize. Our results show that ConCET significantly improves topic classification performance on both datasets, including 8-10% improvements over state-of-the-art deep learning methods. We complement our quantitative results with detailed analysis of system performance, which could be used for further improvements of conversational agents.

Since the emergence of the worldwide pandemic of COVID-19, relevant research has been published at a dazzling pace, which makes it hard to follow the research in this area without dedicated efforts. It is practically impossible to implement this task manually due to the high volume of the relevant literature. Text mining has been considered to be a powerful approach to address this challenge, especially the topic modeling, a well-known unsupervised method that aims to reveal latent topics from the literature. However, in spite of its potential utility, the results generated from this approach are often investigated manually. Hence, its application to the COVID-19 literature is not straightforward and expert knowledge is needed to make meaningful interpretations. In order to address these challenges, we propose a novel analytical framework for effective visualization and mining of topic modeling results. Here we assumed that topics constituting a paper can be positioned on an interaction map, which belongs to a high-dimensional Euclidean space. Based on this assumption, after summarizing topics with their topic-word distributions using the biterm topic model, we mapped these latent topics on networks to visualize relationships among the topics. Moreover, in the proposed approach, the change of relationships among topics can be traced using a trajectory plot generated with different levels of word richness. These results together provide a deeply mined and intuitive representation of relationships among topics related to a specific research area. The application of this proposed framework to the PubMed literature shows that our approach facilitates understanding of the topics constituting the COVID-19 knowledge. 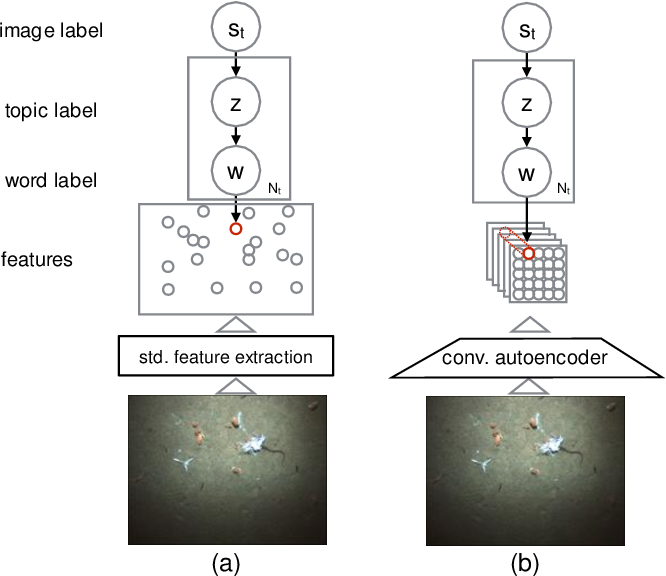 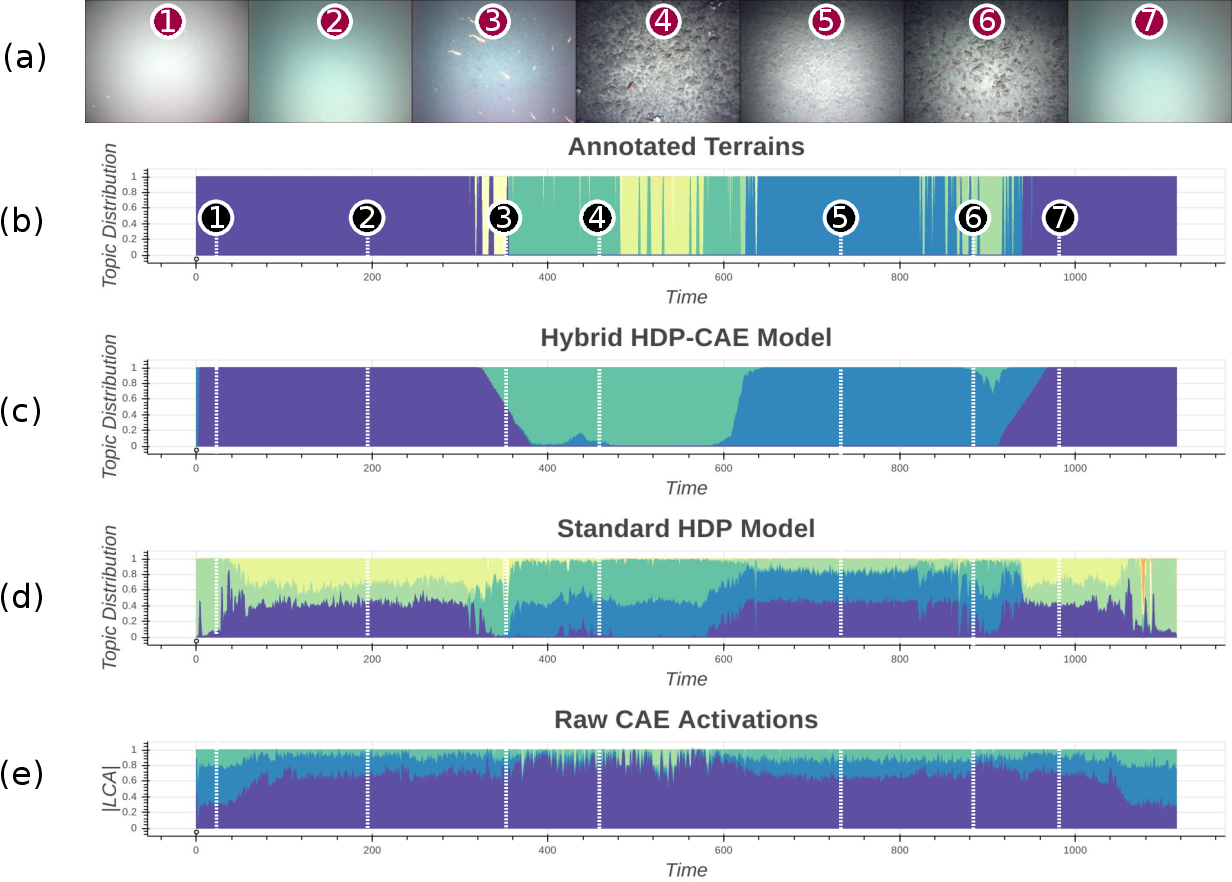 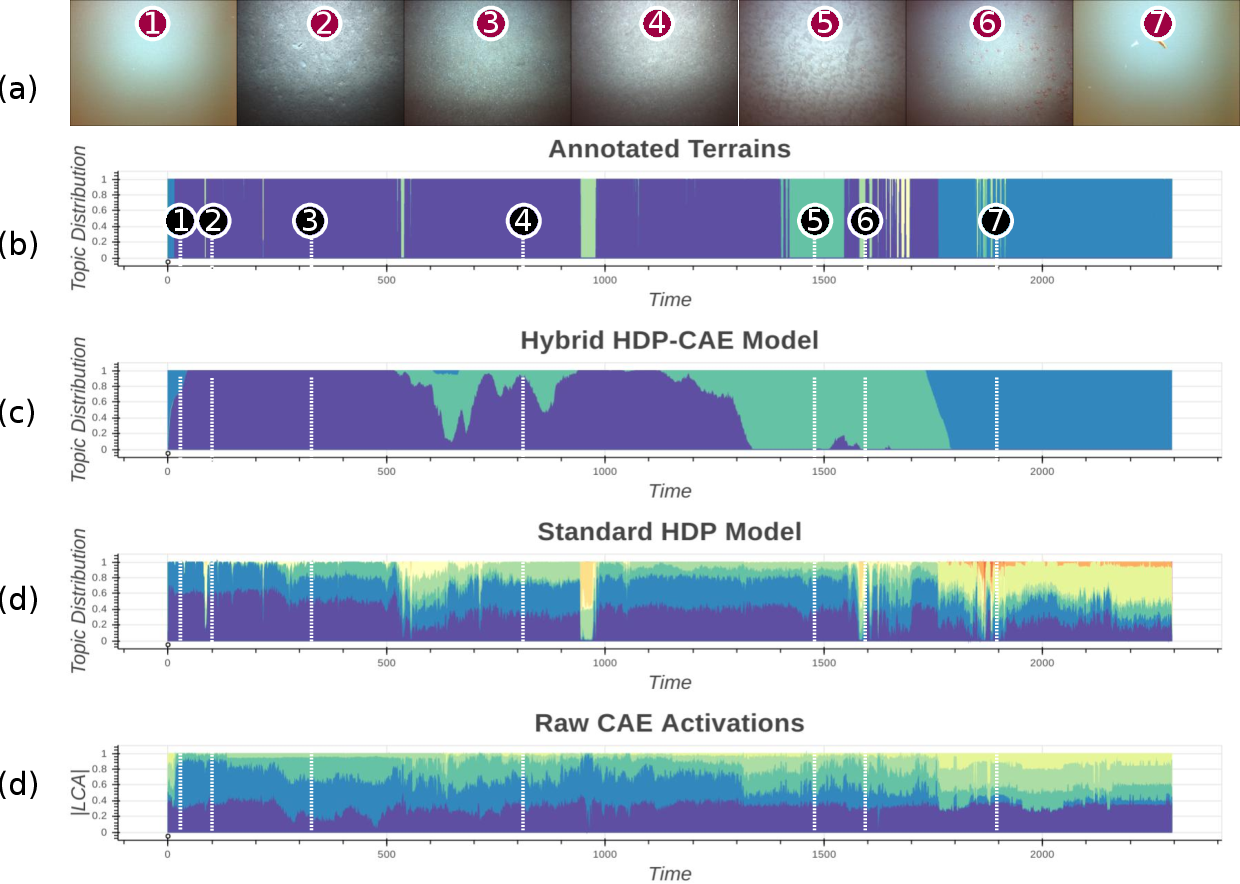 The gap between our ability to collect interesting data and our ability to analyze these data is growing at an unprecedented rate. Recent algorithmic attempts to fill this gap have employed unsupervised tools to discover structure in data. Some of the most successful approaches have used probabilistic models to uncover latent thematic structure in discrete data. Despite the success of these models on textual data, they have not generalized as well to image data, in part because of the spatial and temporal structure that may exist in an image stream. We introduce a novel unsupervised machine learning framework that incorporates the ability of convolutional autoencoders to discover features from images that directly encode spatial information, within a Bayesian nonparametric topic model that discovers meaningful latent patterns within discrete data. By using this hybrid framework, we overcome the fundamental dependency of traditional topic models on rigidly hand-coded data representations, while simultaneously encoding spatial dependency in our topics without adding model complexity. We apply this model to the motivating application of high-level scene understanding and mission summarization for exploratory marine robots. Our experiments on a seafloor dataset collected by a marine robot show that the proposed hybrid framework outperforms current state-of-the-art approaches on the task of unsupervised seafloor terrain characterization.