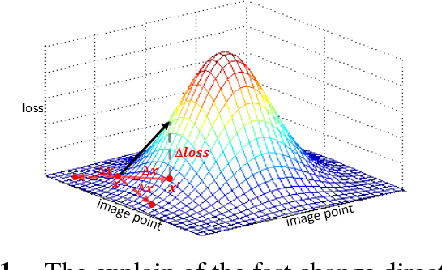 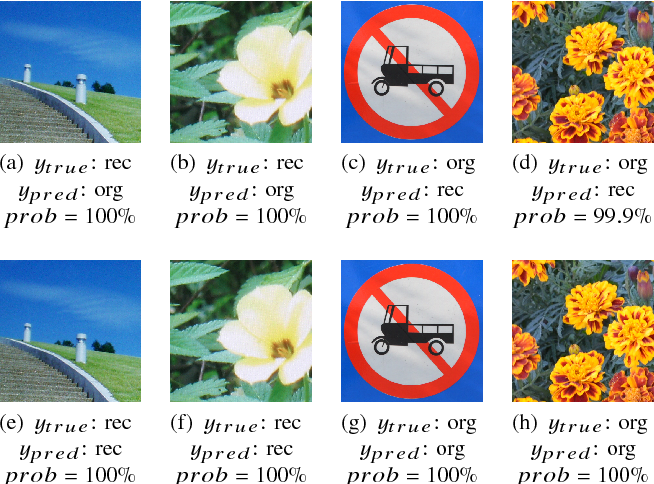 Recently, image forensics community has paied attention to the research on the design of effective algorithms based on deep learning technology and facts proved that combining the domain knowledge of image forensics and deep learning would achieve more robust and better performance than the traditional schemes. Instead of improving it, in this paper, the safety of deep learning based methods in the field of image forensics is taken into account. To the best of our knowledge, this is a first work focusing on this topic. Specifically, we experimentally find that the method using deep learning would fail when adding the slight noise into the images (adversarial images). Furthermore, two kinds of strategys are proposed to enforce security of deep learning-based method. Firstly, an extra penalty term to the loss function is added, which is referred to the 2-norm of the gradient of the loss with respect to the input images, and then an novel training method are adopt to train the model by fusing the normal and adversarial images. Experimental results show that the proposed algorithm can achieve good performance even in the case of adversarial images and provide a safety consideration for deep learning-based image forensics 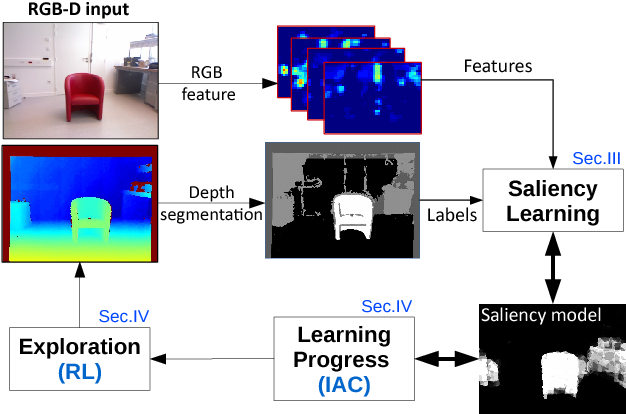 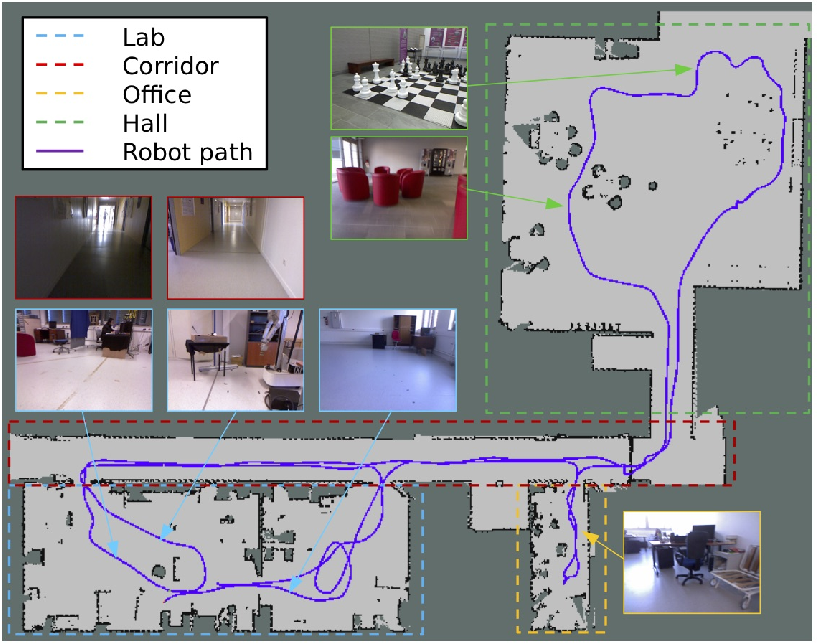 The problem of object localization and recognition on autonomous mobile robots is still an active topic. In this context, we tackle the problem of learning a model of visual saliency directly on a robot. This model, learned and improved on-the-fly during the robot's exploration provides an efficient tool for localizing relevant objects within their environment. The proposed approach includes two intertwined components. On the one hand, we describe a method for learning and incrementally updating a model of visual saliency from a depth-based object detector. This model of saliency can also be exploited to produce bounding box proposals around objects of interest. On the other hand, we investigate an autonomous exploration technique to efficiently learn such a saliency model. The proposed exploration, called Reinforcement Learning-Intelligent Adaptive Curiosity (RL-IAC) is able to drive the robot's exploration so that samples selected by the robot are likely to improve the current model of saliency. We then demonstrate that such a saliency model learned directly on a robot outperforms several state-of-the-art saliency techniques, and that RL-IAC can drastically decrease the required time for learning a reliable saliency model. 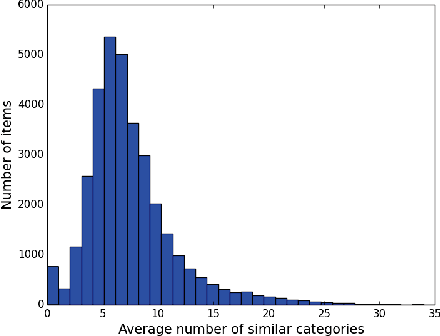 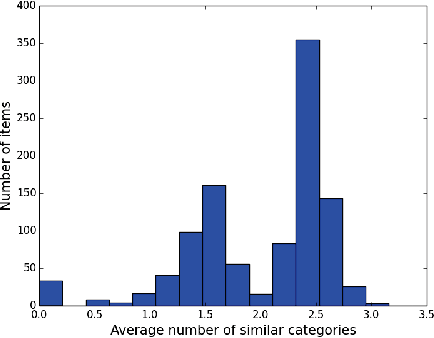 To capture the inherent geometric features of many community detection problems, we propose to use a new random graph model of communities that we call a Geometric Block Model. The geometric block model generalizes the random geometric graphs in the same way that the well-studied stochastic block model generalizes the Erdos-Renyi random graphs. It is also a natural extension of random community models inspired by the recent theoretical and practical advancement in community detection. While being a topic of fundamental theoretical interest, our main contribution is to show that many practical community structures are better explained by the geometric block model. We also show that a simple triangle-counting algorithm to detect communities in the geometric block model is near-optimal. Indeed, even in the regime where the average degree of the graph grows only logarithmically with the number of vertices (sparse-graph), we show that this algorithm performs extremely well, both theoretically and practically. In contrast, the triangle-counting algorithm is far from being optimum for the stochastic block model. We simulate our results on both real and synthetic datasets to show superior performance of both the new model as well as our algorithm.


* A shorter version of this paper has appeared in 32nd AAAI Conference on Artificial Intelligence. The AAAI proceedings version as well as the previous version in arxiv contained some errors that have been corrected in this version 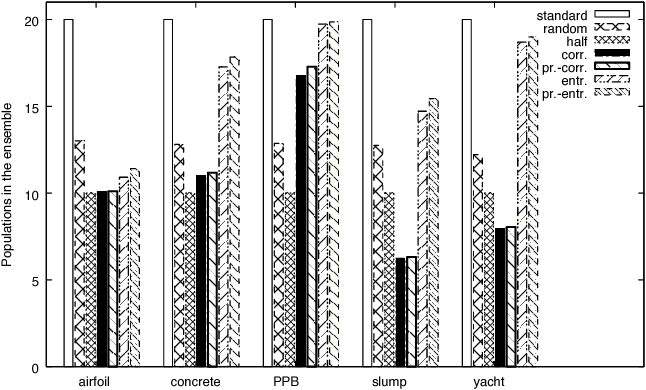 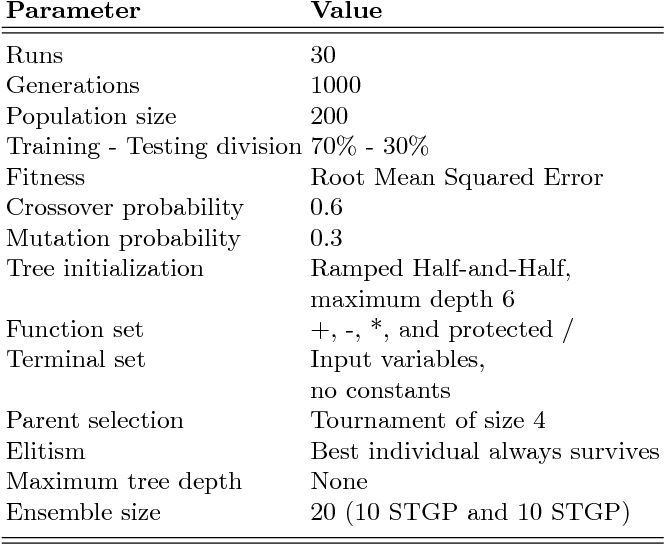 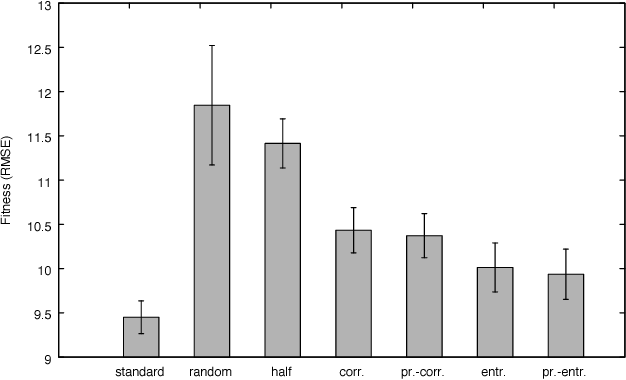 The objective of this paper is to define an effective strategy for building an ensemble of Genetic Programming (GP) models. Ensemble methods are widely used in machine learning due to their features: they average out biases, they reduce the variance and they usually generalize better than single models. Despite these advantages, building ensemble of GP models is not a well-developed topic in the evolutionary computation community. To fill this gap, we propose a strategy that blends individuals produced by standard syntax-based GP and individuals produced by geometric semantic genetic programming, one of the newest semantics-based method developed in GP. In fact, recent literature showed that combining syntax and semantics could improve the generalization ability of a GP model. Additionally, to improve the diversity of the GP models used to build up the ensemble, we propose different pruning criteria that are based on correlation and entropy, a commonly used measure in information theory. Experimental results,obtained over different complex problems, suggest that the pruning criteria based on correlation and entropy could be effective in improving the generalization ability of the ensemble model and in reducing the computational burden required to build it. 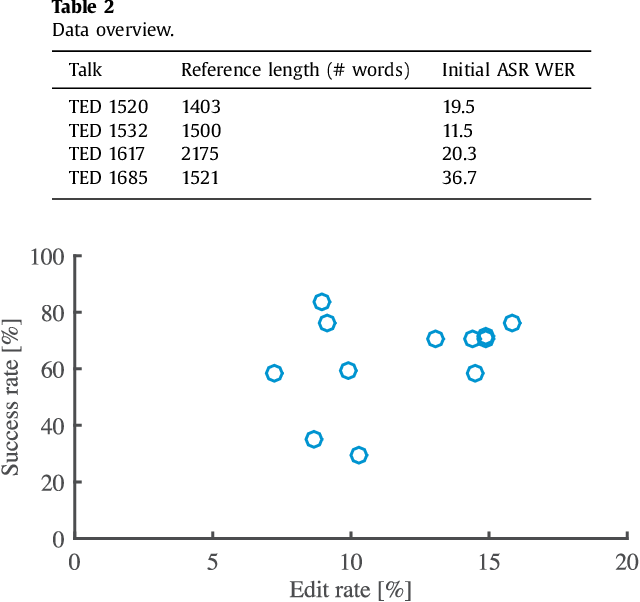 We investigate the problem of manually correcting errors from an automatic speech transcript in a cost-sensitive fashion. This is done by specifying a fixed time budget, and then automatically choosing location and size of segments for correction such that the number of corrected errors is maximized. The core components, as suggested by previous research [1], are a utility model that estimates the number of errors in a particular segment, and a cost model that estimates annotation effort for the segment. In this work we propose a dynamic updating framework that allows for the training of cost models during the ongoing transcription process. This removes the need for transcriber enrollment prior to the actual transcription, and improves correction efficiency by allowing highly transcriber-adaptive cost modeling. We first confirm and analyze the improvements afforded by this method in a simulated study. We then conduct a realistic user study, observing efficiency improvements of 15% relative on average, and 42% for the participants who deviated most strongly from our initial, transcriber-agnostic cost model. Moreover, we find that our updating framework can capture dynamically changing factors, such as transcriber fatigue and topic familiarity, which we observe to have a large influence on the transcriber's working behavior. 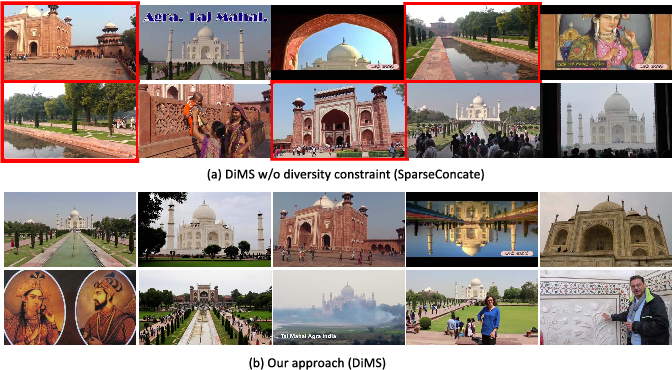 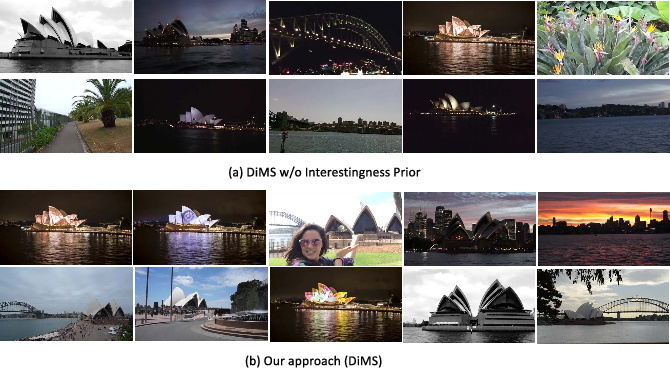 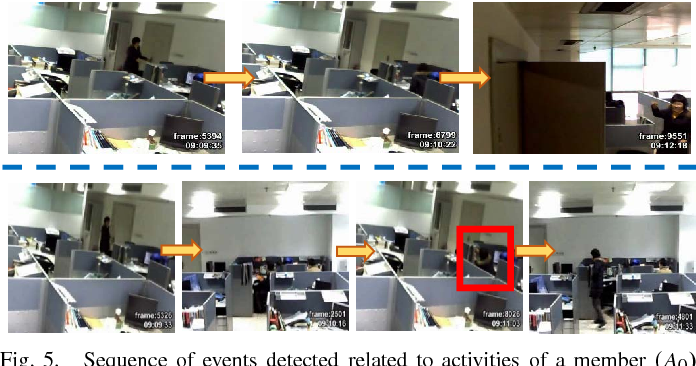 Most video summarization approaches have focused on extracting a summary from a single video; we propose an unsupervised framework for summarizing a collection of videos. We observe that each video in the collection may contain some information that other videos do not have, and thus exploring the underlying complementarity could be beneficial in creating a diverse informative summary. We develop a novel diversity-aware sparse optimization method for multi-video summarization by exploring the complementarity within the videos. Our approach extracts a multi-video summary which is both interesting and representative in describing the whole video collection. To efficiently solve our optimization problem, we develop an alternating minimization algorithm that minimizes the overall objective function with respect to one video at a time while fixing the other videos. Moreover, we introduce a new benchmark dataset, Tour20, that contains 140 videos with multiple human created summaries, which were acquired in a controlled experiment. Finally, by extensive experiments on the new Tour20 dataset and several other multi-view datasets, we show that the proposed approach clearly outperforms the state-of-the-art methods on the two problems-topic-oriented video summarization and multi-view video summarization in a camera network.

The Social Dynamics of Language Change in Online Networks 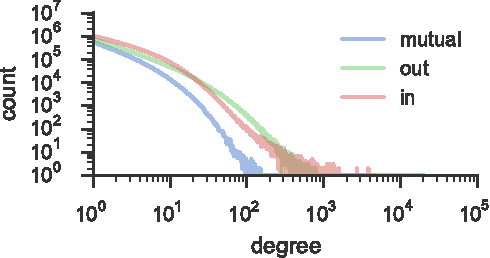 Language change is a complex social phenomenon, revealing pathways of communication and sociocultural influence. But, while language change has long been a topic of study in sociolinguistics, traditional linguistic research methods rely on circumstantial evidence, estimating the direction of change from differences between older and younger speakers. In this paper, we use a data set of several million Twitter users to track language changes in progress. First, we show that language change can be viewed as a form of social influence: we observe complex contagion for phonetic spellings and "netspeak" abbreviations (e.g., lol), but not for older dialect markers from spoken language. Next, we test whether specific types of social network connections are more influential than others, using a parametric Hawkes process model. We find that tie strength plays an important role: densely embedded social ties are significantly better conduits of linguistic influence. Geographic locality appears to play a more limited role: we find relatively little evidence to support the hypothesis that individuals are more influenced by geographically local social ties, even in their usage of geographical dialect markers.


* This paper appears in the Proceedings of the International Conference on Social Informatics (SocInfo16). The final publication is available at springer.com 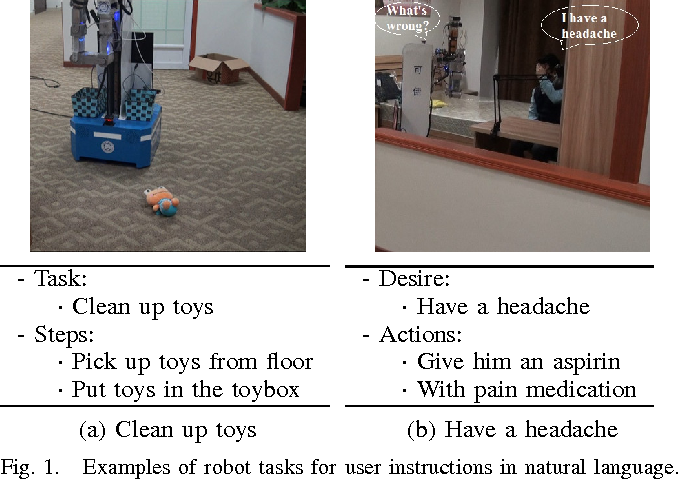 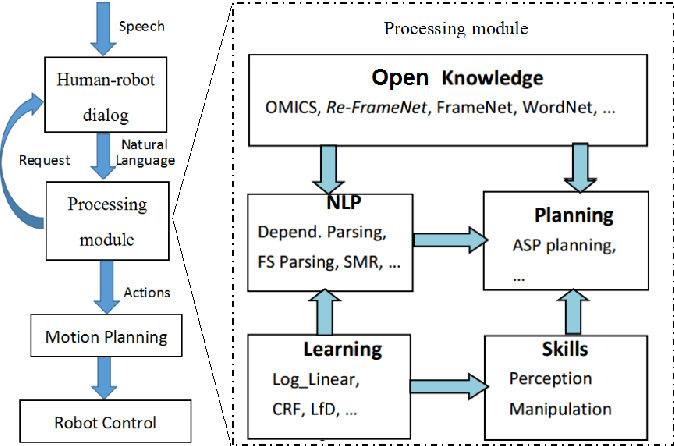 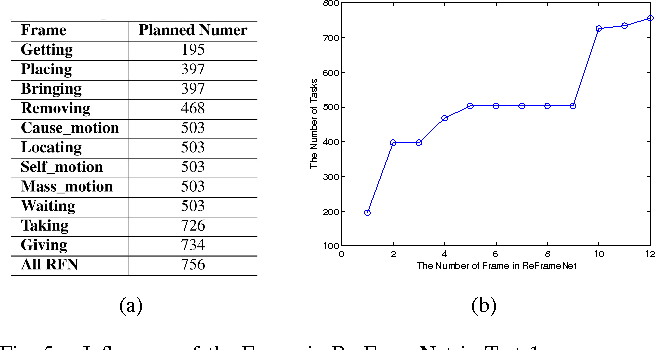 Understanding user instructions in natural language is an active research topic in AI and robotics. Typically, natural user instructions are high-level and can be reduced into low-level tasks expressed in common verbs (e.g., `take', `get', `put'). For robots understanding such instructions, one of the key challenges is to process high-level user instructions and achieve the specified tasks with robots' primitive actions. To address this, we propose novel algorithms by utilizing semantic roles of common verbs defined in semantic dictionaries and integrating multiple open knowledge to generate task plans. Specifically, we present a new method for matching and recovering semantics of user instructions and a novel task planner that exploits functional knowledge of robot's action model. To verify and evaluate our approach, we implemented a prototype system using knowledge from several open resources. Experiments on our system confirmed the correctness and efficiency of our algorithms. Notably, our system has been deployed in the KeJia robot, which participated the annual [email protected] competitions in the past three years and achieved encouragingly high scores in the benchmark tests. 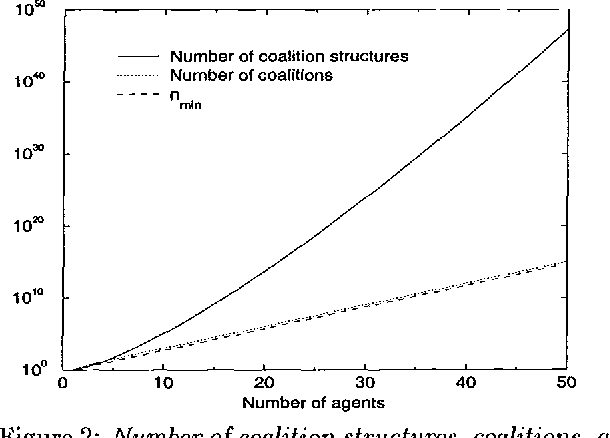 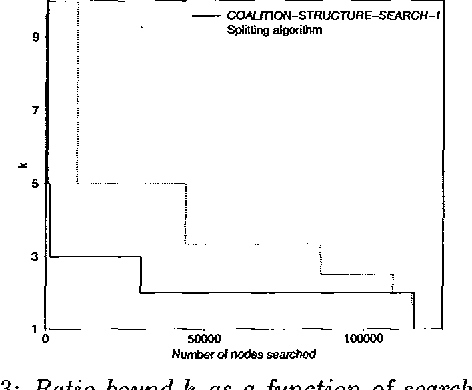 Coalition formation is a key topic in multiagent systems. One would prefer a coalition structure that maximizes the sum of the values of the coalitions, but often the number of coalition structures is too large to allow exhaustive search for the optimal one. But then, can the coalition structure found via a partial search be guaranteed to be within a bound from optimum? We show that none of the previous coalition structure generation algorithms can establish any bound because they search fewer nodes than a threshold that we show necessary for establishing a bound. We present an algorithm that establishes a tight bound within this minimal amount of search, and show that any other algorithm would have to search strictly more. The fraction of nodes needed to be searched approaches zero as the number of agents grows. If additional time remains, our anytime algorithm searches further, and establishes a progressively lower tight bound. Surprisingly, just searching one more node drops the bound in half. As desired, our algorithm lowers the bound rapidly early on, and exhibits diminishing returns to computation. It also drastically outperforms its obvious contenders. Finally, we show how to distribute the desired search across self-interested manipulative agents. 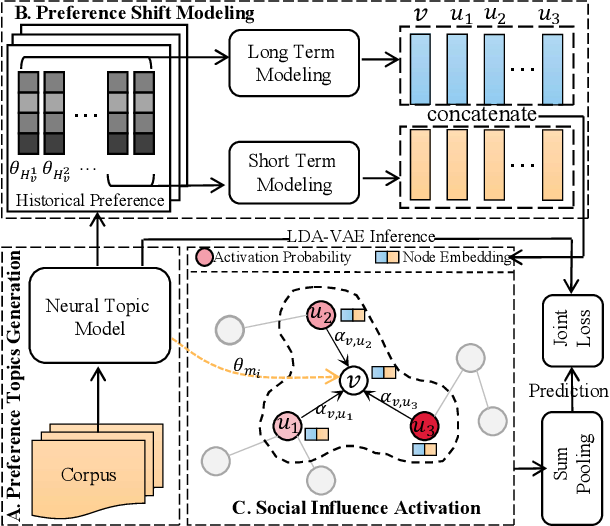 Network-aware cascade size prediction aims to predict the final reposted number of user-generated information via modeling the propagation process in social networks. Estimating the user's reposting probability by social influence, namely state activation plays an important role in the information diffusion process. Therefore, Graph Neural Networks (GNN), which can simulate the information interaction between nodes, has been proved as an effective scheme to handle this prediction task. However, existing studies including GNN-based models usually neglect a vital factor of user's preference which influences the state activation deeply. To that end, we propose a novel framework to promote cascade size prediction by enhancing the user preference modeling according to three stages, i.e., preference topics generation, preference shift modeling, and social influence activation. Our end-to-end method makes the user activating process of information diffusion more adaptive and accurate. Extensive experiments on two large-scale real-world datasets have clearly demonstrated the effectiveness of our proposed model compared to state-of-the-art baselines.