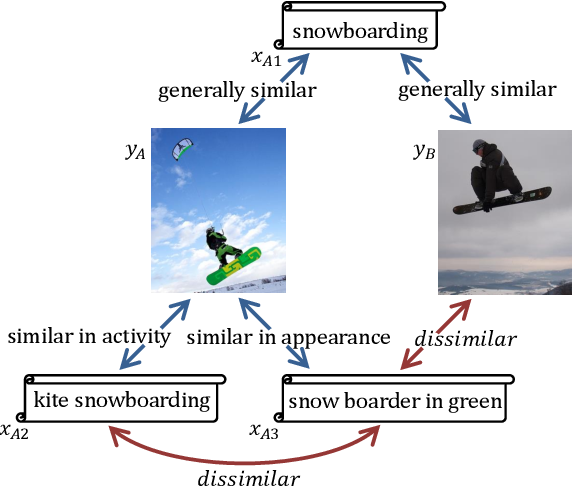 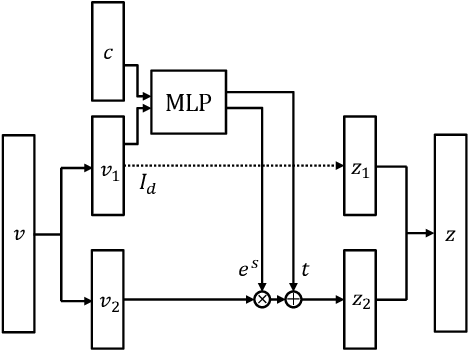 Multimodal embedding is a crucial research topic for cross-modal understanding, data mining, and translation. Many studies have attempted to extract representations from given entities and align them in a shared embedding space. However, because entities in different modalities exhibit different abstraction levels and modality-specific information, it is insufficient to embed related entities close to each other. In this study, we propose the Target-Oriented Deformation Network (TOD-Net), a novel module that continuously deforms the embedding space into a new space under a given condition, thereby adjusting similarities between entities. Unlike methods based on cross-modal attention, TOD-Net is a post-process applied to the embedding space learned by existing embedding systems and improves their performances of retrieval. In particular, when combined with cutting-edge models, TOD-Net gains the state-of-the-art cross-modal retrieval model associated with the MSCOCO dataset. Qualitative analysis reveals that TOD-Net successfully emphasizes entity-specific concepts and retrieves diverse targets via handling higher levels of diversity than existing models. 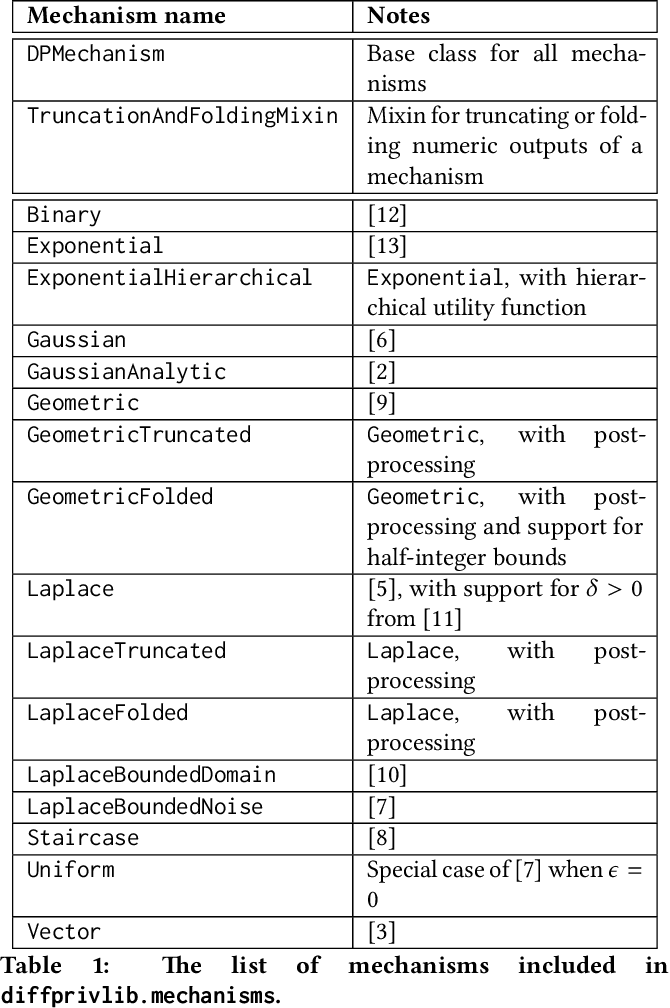 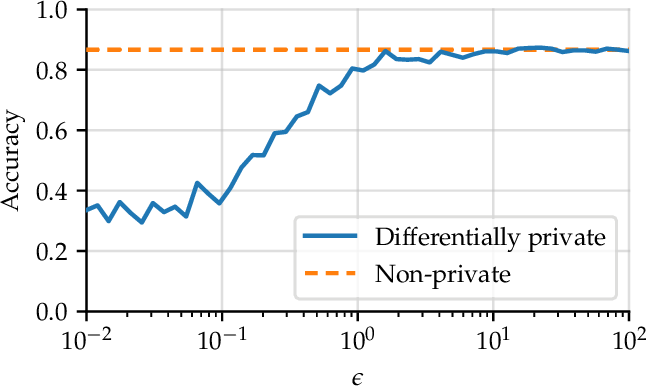 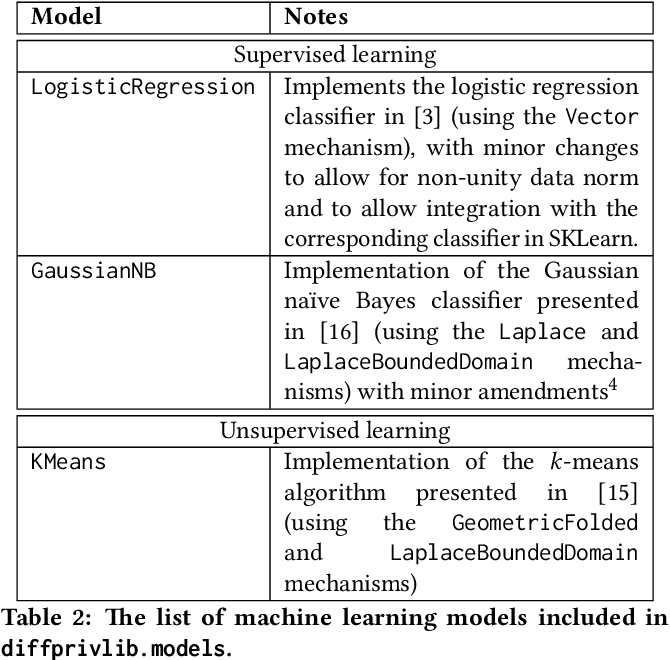 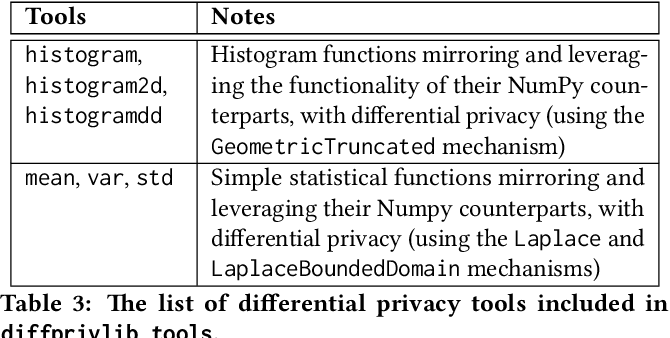 Since its conception in 2006, differential privacy has emerged as the de-facto standard in data privacy, owing to its robust mathematical guarantees, generalised applicability and rich body of literature. Over the years, researchers have studied differential privacy and its applicability to an ever-widening field of topics. Mechanisms have been created to optimise the process of achieving differential privacy, for various data types and scenarios. Until this work however, all previous work on differential privacy has been conducted on a ad-hoc basis, without a single, unifying codebase to implement results. In this work, we present the IBM Differential Privacy Library, a general purpose, open source library for investigating, experimenting and developing differential privacy applications in the Python programming language. The library includes a host of mechanisms, the building blocks of differential privacy, alongside a number of applications to machine learning and other data analytics tasks. Simplicity and accessibility has been prioritised in developing the library, making it suitable to a wide audience of users, from those using the library for their first investigations in data privacy, to the privacy experts looking to contribute their own models and mechanisms for others to use.

This paper is the final part of the scientific discussion organised by the Journal "Physics of Life Rviews" about the simplicity revolution in neuroscience and AI. This discussion was initiated by the review paper "The unreasonable effectiveness of small neural ensembles in high-dimensional brain". Phys Life Rev 2019, doi 10.1016/j.plrev.2018.09.005, arXiv:1809.07656. The topics of the discussion varied from the necessity to take into account the difference between the theoretical random distributions and "extremely non-random" real distributions and revise the common machine learning theory, to different forms of the curse of dimensionality and high-dimensional pitfalls in neuroscience. V. K{\r{u}}rkov{\'a}, A. Tozzi and J.F. Peters, R. Quian Quiroga, P. Varona, R. Barrio, G. Kreiman, L. Fortuna, C. van Leeuwen, R. Quian Quiroga, and V. Kreinovich, A.N. Gorban, V.A. Makarov, and I.Y. Tyukin participated in the discussion. In this paper we analyse the symphony of opinions and the possible outcomes of the simplicity revolution for machine learning and neuroscience.

On Measuring Gender Bias in Translation of Gender-neutral Pronouns

Ethics regarding social bias has recently thrown striking issues in natural language processing. Especially for gender-related topics, the need for a system that reduces the model bias has grown in areas such as image captioning, content recommendation, and automated employment. However, detection and evaluation of gender bias in the machine translation systems are not yet thoroughly investigated, for the task being cross-lingual and challenging to define. In this paper, we propose a scheme for making up a test set that evaluates the gender bias in a machine translation system, with Korean, a language with gender-neutral pronouns. Three word/phrase sets are primarily constructed, each incorporating positive/negative expressions or occupations; all the terms are gender-independent or at least not biased to one side severely. Then, additional sentence lists are constructed concerning formality of the pronouns and politeness of the sentences. With the generated sentence set of size 4,236 in total, we evaluate gender bias in conventional machine translation systems utilizing the proposed measure, which is termed here as translation gender bias index (TGBI). The corpus and the code for evaluation is available on-line.

Signaling proteins are an important topic in drug development due to the increased importance of finding fast, accurate and cheap methods to evaluate new molecular targets involved in specific diseases. The complexity of the protein structure hinders the direct association of the signaling activity with the molecular structure. Therefore, the proposed solution involves the use of protein star graphs for the peptide sequence information encoding into specific topological indices calculated with S2SNet tool. The Quantitative Structure-Activity Relationship classification model obtained with Machine Learning techniques is able to predict new signaling peptides. The best classification model is the first signaling prediction model, which is based on eleven descriptors and it was obtained using the Support Vector Machines - Recursive Feature Elimination (SVM-RFE) technique with the Laplacian kernel (RFE-LAP) and an AUROC of 0.961. Testing a set of 3114 proteins of unknown function from the PDB database assessed the prediction performance of the model. Important signaling pathways are presented for three UniprotIDs (34 PDBs) with a signaling prediction greater than 98.0%.

A laboratory-created dataset with ground-truth for hyperspectral unmixing evaluation 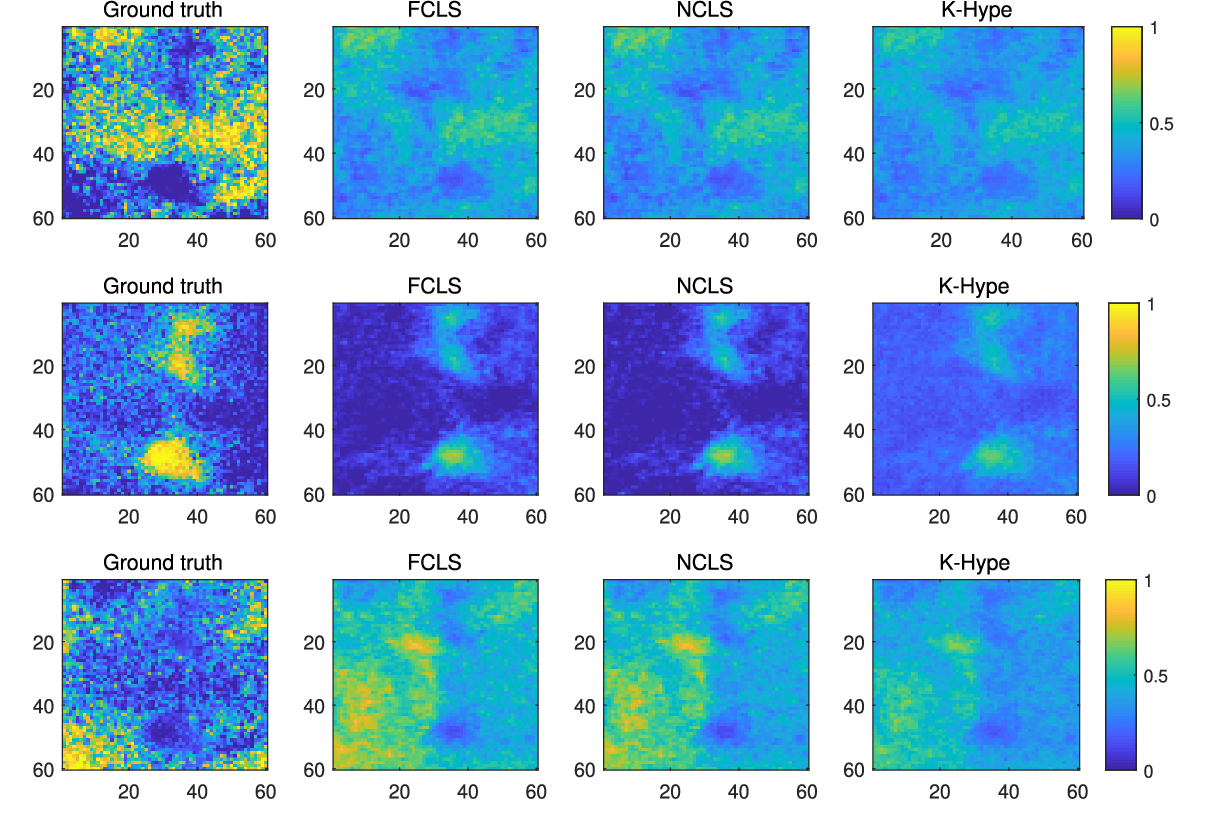 Spectral unmixing is an important and challenging problem in hyperspectral data processing. This topic has been extensively studied and a variety of unmixing algorithms have been proposed in the literature. However, the lack of publicly available dataset with ground-truth makes it difficult to evaluate and compare the performance of unmixing algorithms in a quantitative and objective manner. Most of the existing works rely on the use of numerical synthetic data and an intuitive inspection of the results of real data. To alleviate this dilemma, in this study, we design several experimental scenes in our laboratory, including printed checkerboards, mixed quartz sands, and reflection with a vertical board. A dataset is then created by imaging these scenes with the hyperspectral camera in our laboratory, providing 36 mixtures with more than 130, 000 pixels with 256 wavelength bands ranging from 400nm to 1000nm. The experimental settings are strictly controlled so that pure material spectral signatures and material compositions are known. To the best of our knowledge, this dataset is the first publicly available dataset created in a systematic manner with ground-truth for spectral unmixing. Some typical linear and nonlinear unmixing algorithms are also tested with this dataset and lead to meaningful results.

Deep Neural Network Approximation for Custom Hardware: Where We've Been, Where We're Going 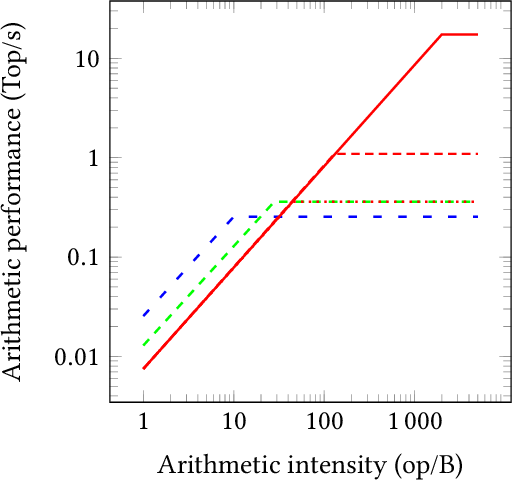 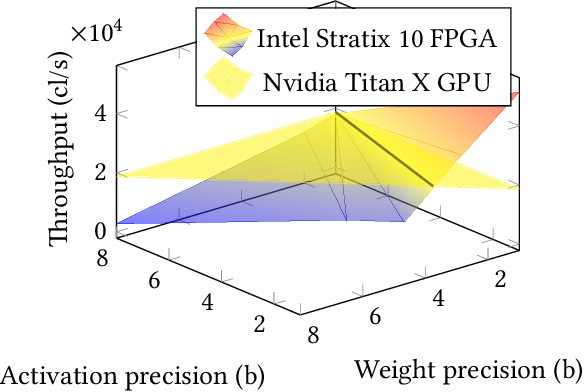 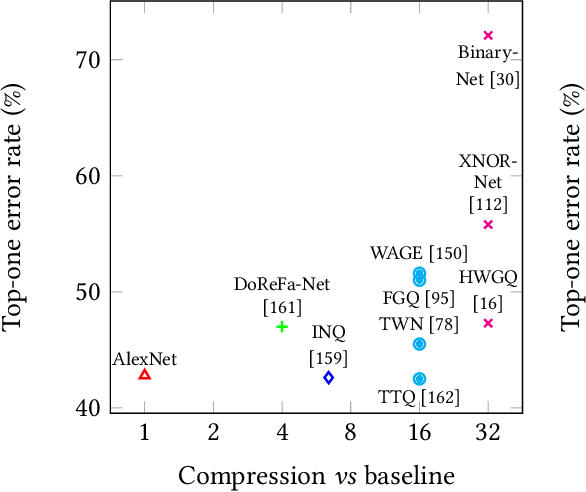 Deep neural networks have proven to be particularly effective in visual and audio recognition tasks. Existing models tend to be computationally expensive and memory intensive, however, and so methods for hardware-oriented approximation have become a hot topic. Research has shown that custom hardware-based neural network accelerators can surpass their general-purpose processor equivalents in terms of both throughput and energy efficiency. Application-tailored accelerators, when co-designed with approximation-based network training methods, transform large, dense and computationally expensive networks into small, sparse and hardware-efficient alternatives, increasing the feasibility of network deployment. In this article, we provide a comprehensive evaluation of approximation methods for high-performance network inference along with in-depth discussion of their effectiveness for custom hardware implementation. We also include proposals for future research based on a thorough analysis of current trends. This article represents the first survey providing detailed comparisons of custom hardware accelerators featuring approximation for both convolutional and recurrent neural networks, through which we hope to inspire exciting new developments in the field. 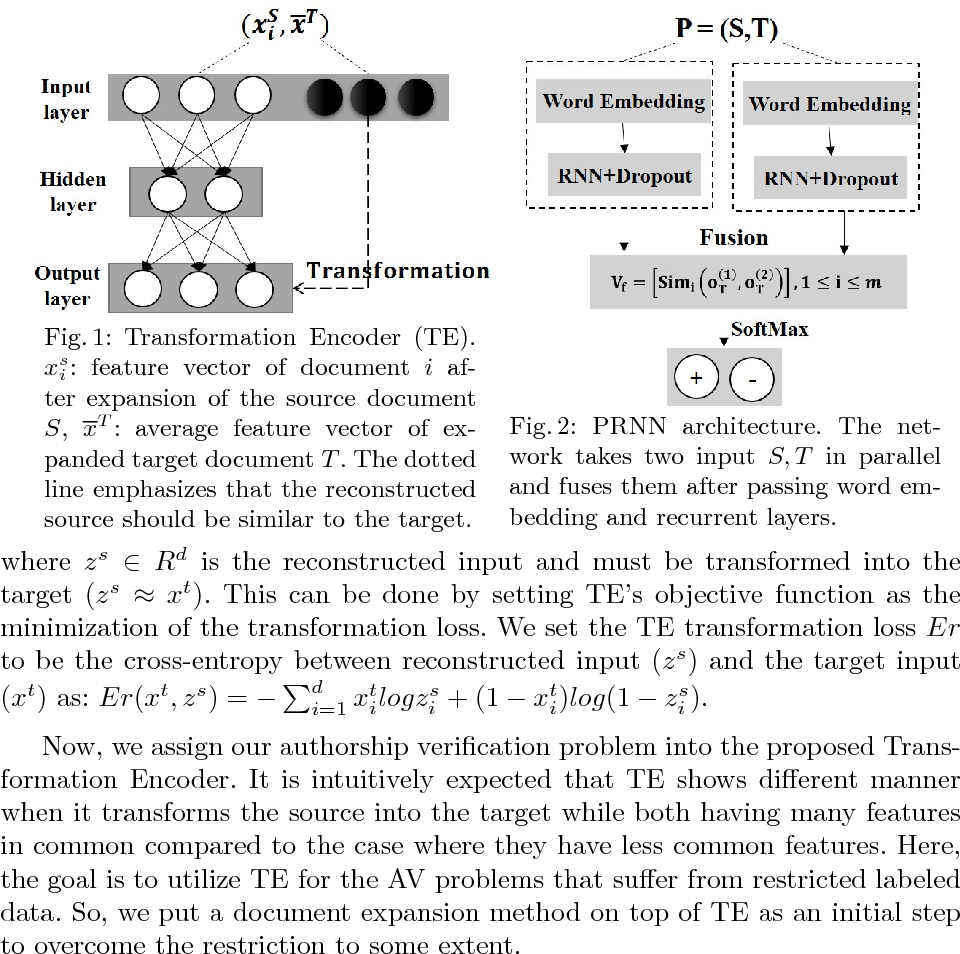 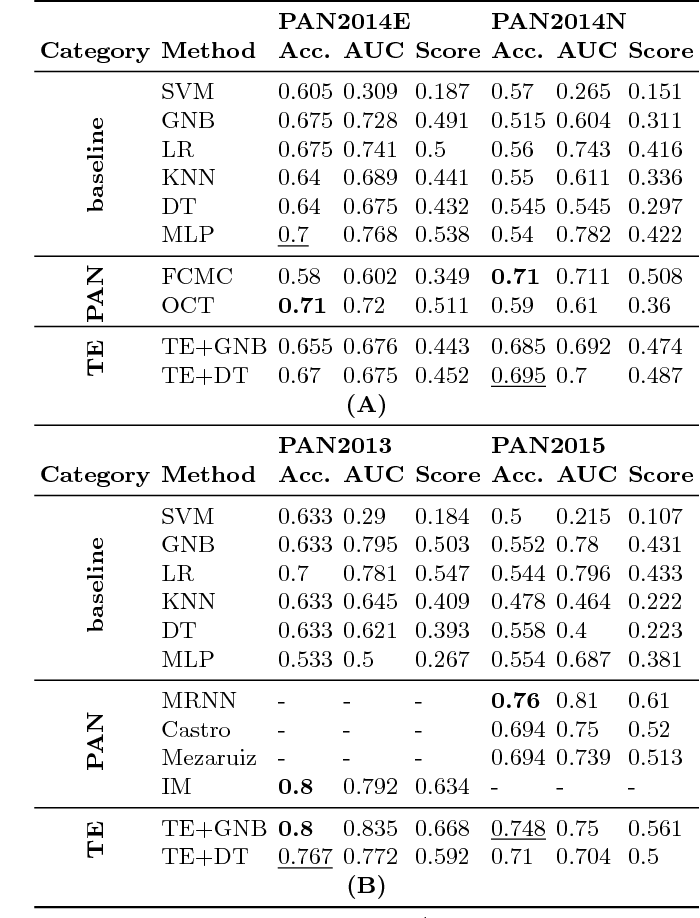 We propose two models for a special case of authorship verification problem. The task is to investigate whether the two documents of a given pair are written by the same author. We consider the authorship verification problem for both small and large scale datasets. The underlying small-scale problem has two main challenges: First, the authors of the documents are unknown to us because no previous writing samples are available. Second, the two documents are short (a few hundred to a few thousand words) and may differ considerably in the genre and/or topic. To solve it we propose transformation encoder to transform one document of the pair into the other. This document transformation generates a loss which is used as a recognizable feature to verify if the authors of the pair are identical. For the large scale problem where various authors are engaged and more examples are available with larger length, a parallel recurrent neural network is proposed. It compares the language models of the two documents. We evaluate our methods on various types of datasets including Authorship Identification datasets of PAN competition, Amazon reviews, and machine learning articles. Experiments show that both methods achieve stable and competitive performance compared to the baselines.

A Cyber Science Based Ontology for Artificial General Intelligence Containment

The development of artificial general intelligence is considered by many to be inevitable. What such intelligence does after becoming aware is not so certain. To that end, research suggests that the likelihood of artificial general intelligence becoming hostile to humans is significant enough to warrant inquiry into methods to limit such potential. Thus, containment of artificial general intelligence is a timely and meaningful research topic. While there is limited research exploring possible containment strategies, such work is bounded by the underlying field the strategies draw upon. Accordingly, we set out to construct an ontology to describe necessary elements in any future containment technology. Using existing academic literature, we developed a single domain ontology containing five levels, 32 codes, and 32 associated descriptors. Further, we constructed ontology diagrams to demonstrate intended relationships. We then identified humans, AGI, and the cyber world as novel agent objects necessary for future containment activities. Collectively, the work addresses three critical gaps: (a) identifying and arranging fundamental constructs; (b) situating AGI containment within cyber science; and (c) developing scientific rigor within the field.

Robust Causal Estimation in the Large-Sample Limit without Strict Faithfulness 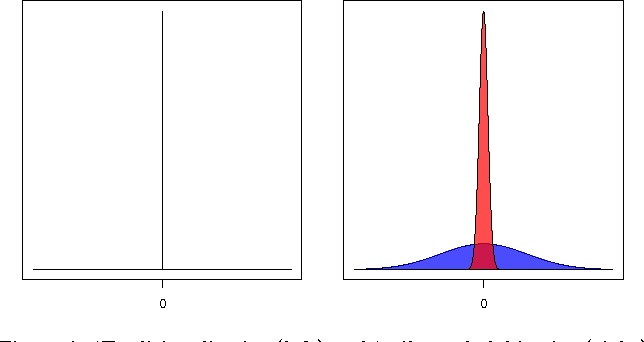 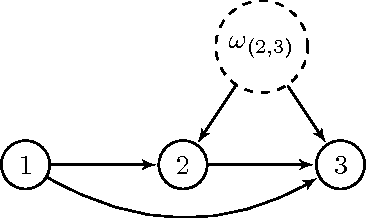 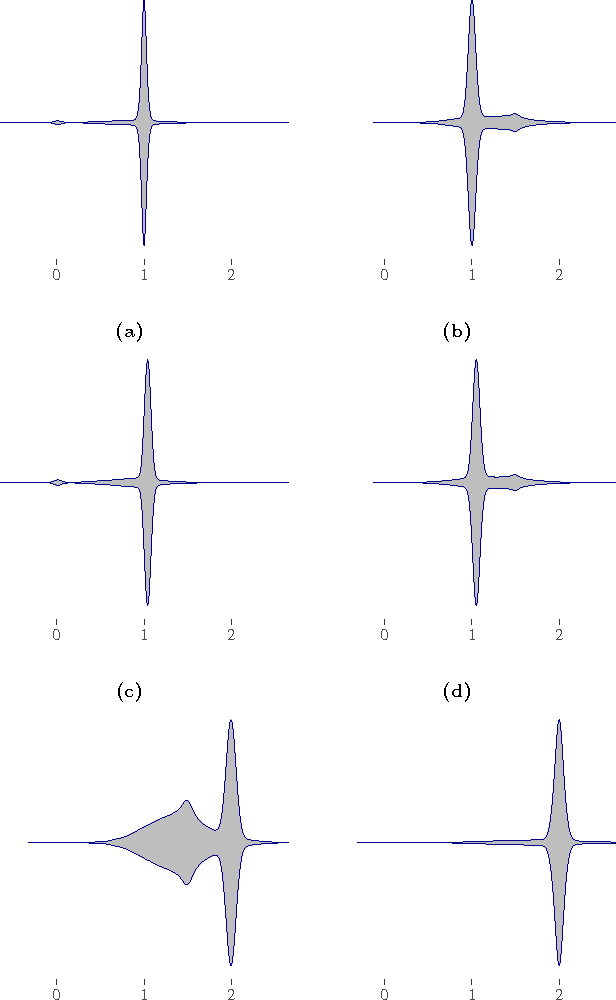 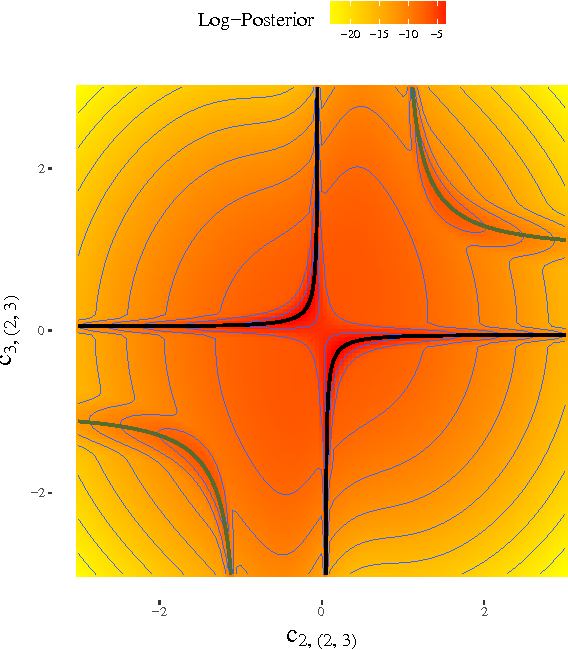 Causal effect estimation from observational data is an important and much studied research topic. The instrumental variable (IV) and local causal discovery (LCD) patterns are canonical examples of settings where a closed-form expression exists for the causal effect of one variable on another, given the presence of a third variable. Both rely on faithfulness to infer that the latter only influences the target effect via the cause variable. In reality, it is likely that this assumption only holds approximately and that there will be at least some form of weak interaction. This brings about the paradoxical situation that, in the large-sample limit, no predictions are made, as detecting the weak edge invalidates the setting. We introduce an alternative approach by replacing strict faithfulness with a prior that reflects the existence of many 'weak' (irrelevant) and 'strong' interactions. We obtain a posterior distribution over the target causal effect estimator which shows that, in many cases, we can still make good estimates. We demonstrate the approach in an application on a simple linear-Gaussian setting, using the MultiNest sampling algorithm, and compare it with established techniques to show our method is robust even when strict faithfulness is violated.