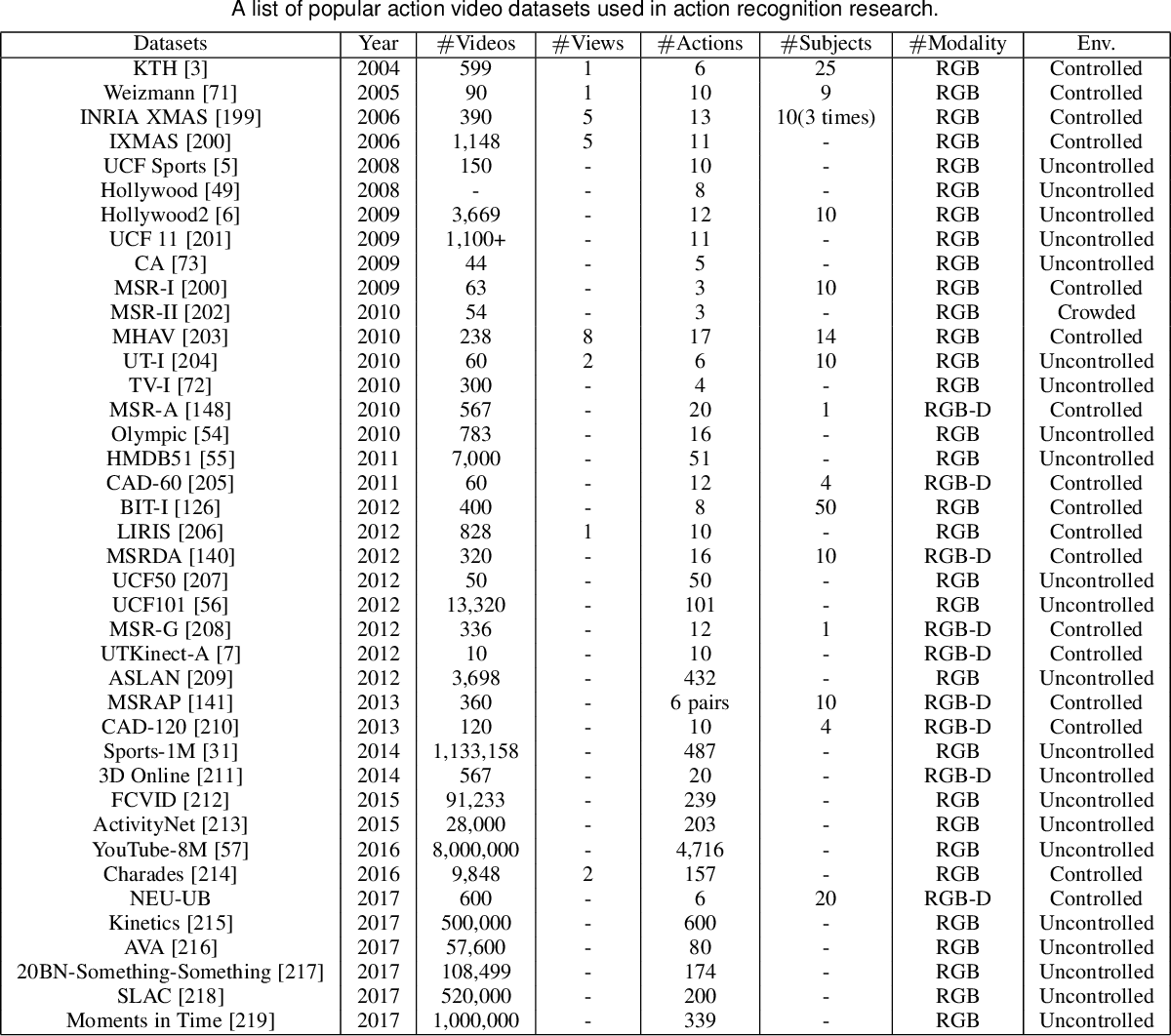 Derived from rapid advances in computer vision and machine learning, video analysis tasks have been moving from inferring the present state to predicting the future state. Vision-based action recognition and prediction from videos are such tasks, where action recognition is to infer human actions (present state) based upon complete action executions, and action prediction to predict human actions (future state) based upon incomplete action executions. These two tasks have become particularly prevalent topics recently because of their explosively emerging real-world applications, such as visual surveillance, autonomous driving vehicle, entertainment, and video retrieval, etc. Many attempts have been devoted in the last a few decades in order to build a robust and effective framework for action recognition and prediction. In this paper, we survey the complete state-of-the-art techniques in the action recognition and prediction. Existing models, popular algorithms, technical difficulties, popular action databases, evaluation protocols, and promising future directions are also provided with systematic discussions. 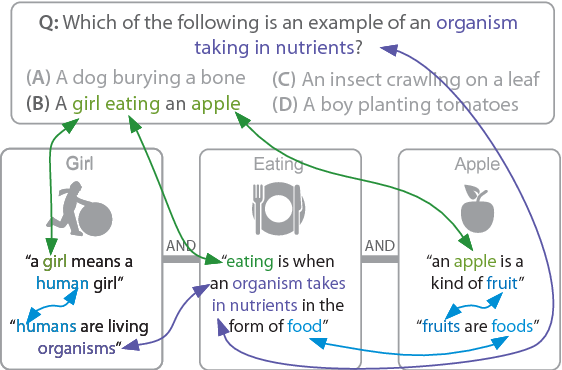 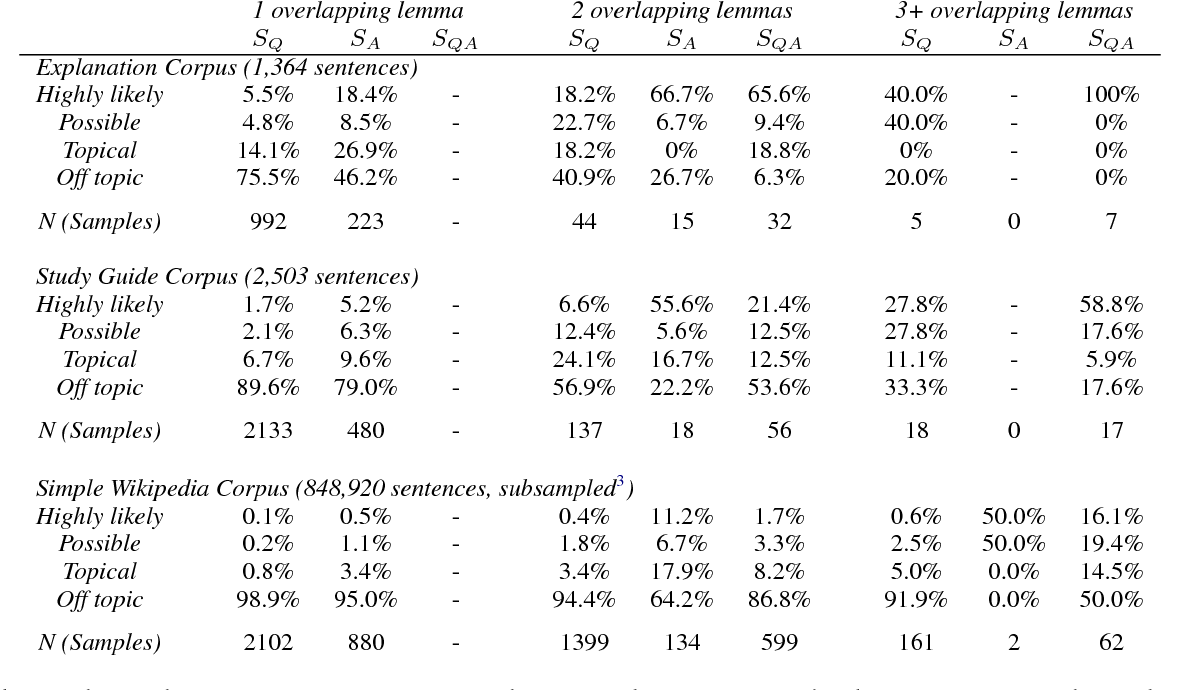 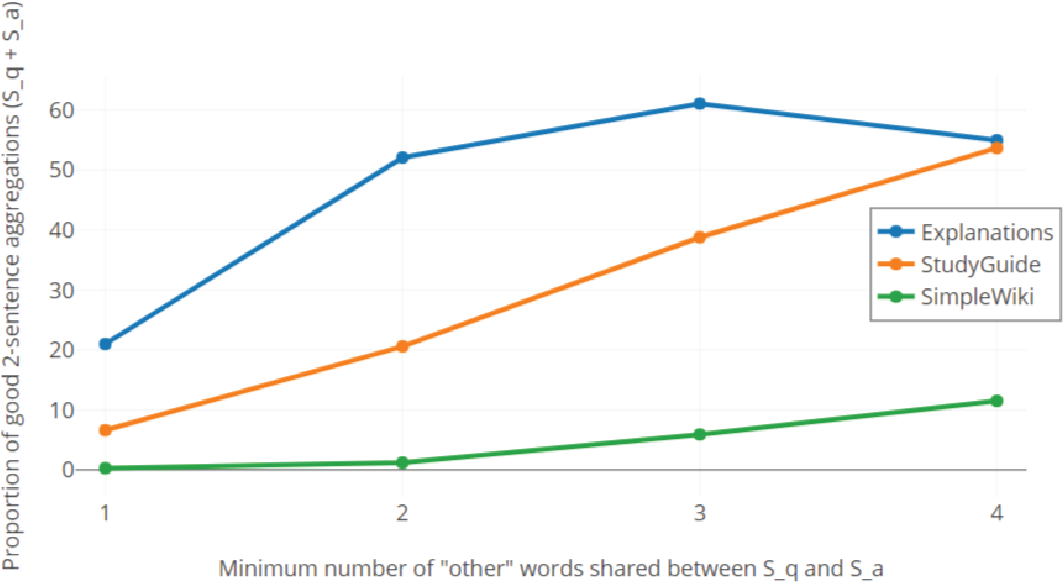 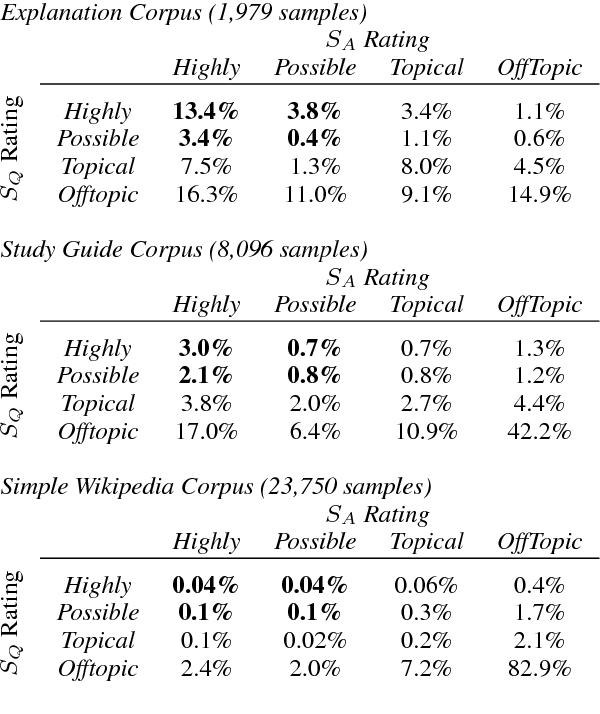 Question Answering for complex questions is often modeled as a graph construction or traversal task, where a solver must build or traverse a graph of facts that answer and explain a given question. This "multi-hop" inference has been shown to be extremely challenging, with few models able to aggregate more than two facts before being overwhelmed by "semantic drift", or the tendency for long chains of facts to quickly drift off topic. This is a major barrier to current inference models, as even elementary science questions require an average of 4 to 6 facts to answer and explain. In this work we empirically characterize the difficulty of building or traversing a graph of sentences connected by lexical overlap, by evaluating chance sentence aggregation quality through 9,784 manually-annotated judgments across knowledge graphs built from three free-text corpora (including study guides and Simple Wikipedia). We demonstrate semantic drift tends to be high and aggregation quality low, at between 0.04% and 3%, and highlight scenarios that maximize the likelihood of meaningfully combining information. 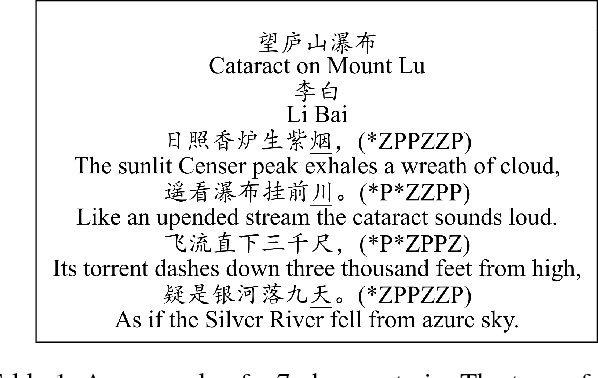 With the recent advances of neural models and natural language processing, automatic generation of classical Chinese poetry has drawn significant attention due to its artistic and cultural value. Previous works mainly focus on generating poetry given keywords or other text information, while visual inspirations for poetry have been rarely explored. Generating poetry from images is much more challenging than generating poetry from text, since images contain very rich visual information which cannot be described completely using several keywords, and a good poem should convey the image accurately. In this paper, we propose a memory based neural model which exploits images to generate poems. Specifically, an Encoder-Decoder model with a topic memory network is proposed to generate classical Chinese poetry from images. To the best of our knowledge, this is the first work attempting to generate classical Chinese poetry from images with neural networks. A comprehensive experimental investigation with both human evaluation and quantitative analysis demonstrates that the proposed model can generate poems which convey images accurately.

Explorations in an English Poetry Corpus: A Neurocognitive Poetics Perspective 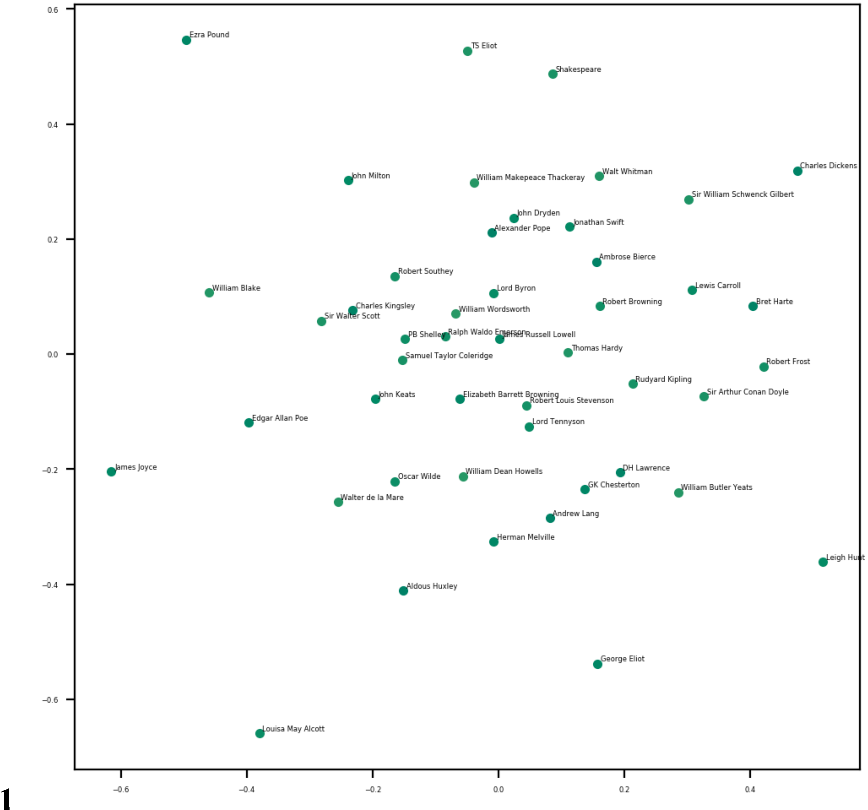 This paper describes a corpus of about 3000 English literary texts with about 250 million words extracted from the Gutenberg project that span a range of genres from both fiction and non-fiction written by more than 130 authors (e.g., Darwin, Dickens, Shakespeare). Quantitative Narrative Analysis (QNA) is used to explore a cleaned subcorpus, the Gutenberg English Poetry Corpus (GEPC) which comprises over 100 poetic texts with around 2 million words from about 50 authors (e.g., Keats, Joyce, Wordsworth). Some exemplary QNA studies show author similarities based on latent semantic analysis, significant topics for each author or various text-analytic metrics for George Eliot's poem 'How Lisa Loved the King' and James Joyce's 'Chamber Music', concerning e.g. lexical diversity or sentiment analysis. The GEPC is particularly suited for research in Digital Humanities, Natural Language Processing or Neurocognitive Poetics, e.g. as training and test corpus, or for stimulus development and control. 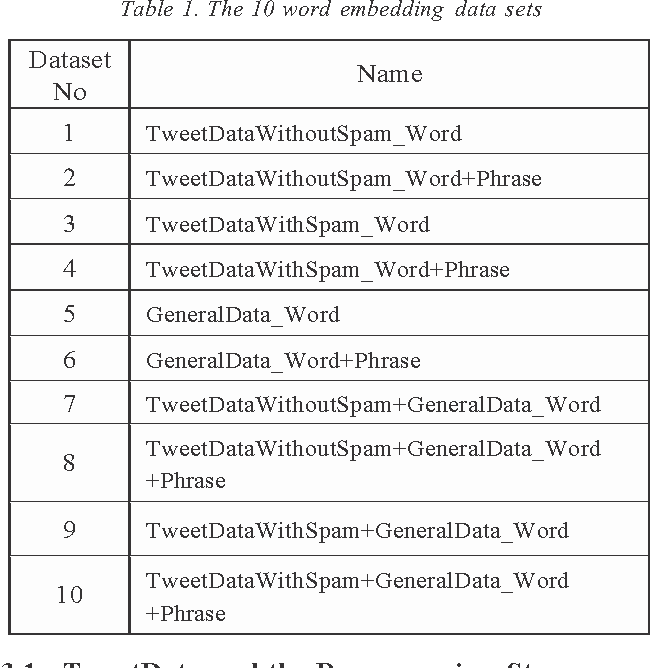 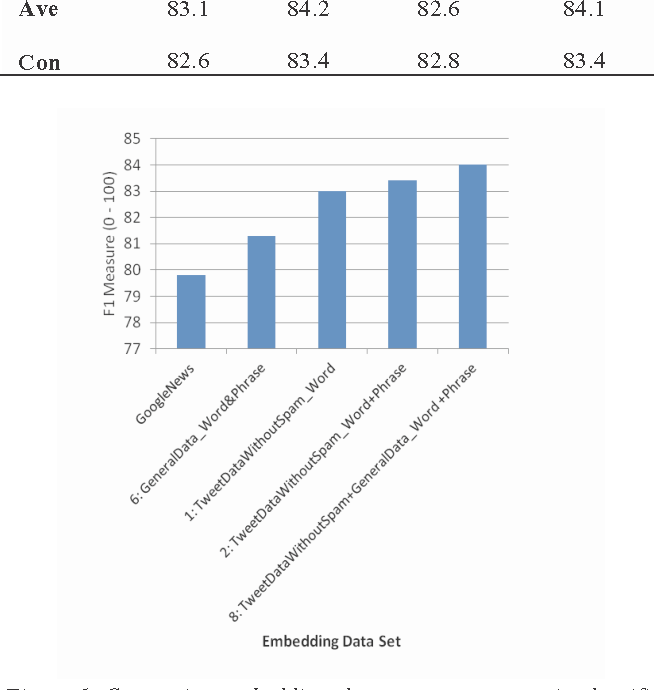 A word embedding is a low-dimensional, dense and real- valued vector representation of a word. Word embeddings have been used in many NLP tasks. They are usually gener- ated from a large text corpus. The embedding of a word cap- tures both its syntactic and semantic aspects. Tweets are short, noisy and have unique lexical and semantic features that are different from other types of text. Therefore, it is necessary to have word embeddings learned specifically from tweets. In this paper, we present ten word embedding data sets. In addition to the data sets learned from just tweet data, we also built embedding sets from the general data and the combination of tweets with the general data. The general data consist of news articles, Wikipedia data and other web data. These ten embedding models were learned from about 400 million tweets and 7 billion words from the general text. In this paper, we also present two experiments demonstrating how to use the data sets in some NLP tasks, such as tweet sentiment analysis and tweet topic classification tasks. 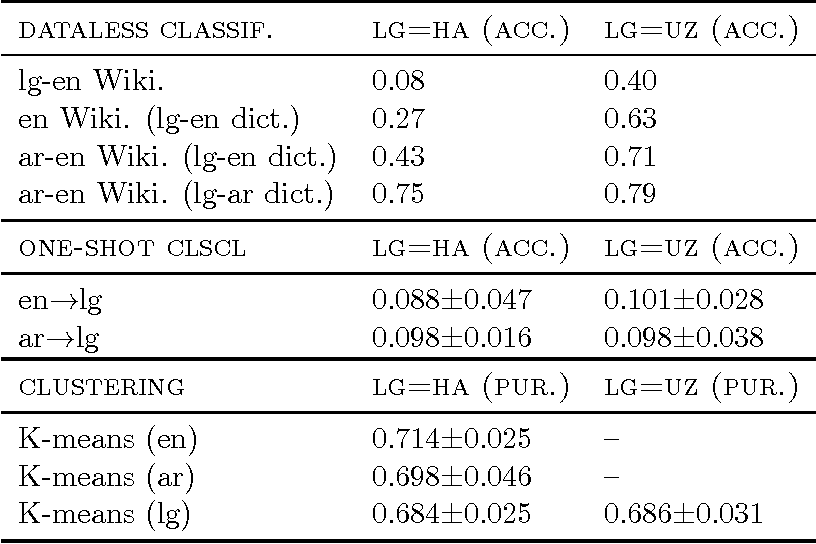 This paper presents an approach to classify documents in any language into an English topical label space, without any text categorization training data. The approach, Cross-Lingual Dataless Document Classification (CLDDC) relies on mapping the English labels or short category description into a Wikipedia-based semantic representation, and on the use of the target language Wikipedia. Consequently, performance could suffer when Wikipedia in the target language is small. In this paper, we focus on languages with small Wikipedias, (Small-Wikipedia languages, SWLs). We use a word-level dictionary to convert documents in a SWL to a large-Wikipedia language (LWLs), and then perform CLDDC based on the LWL's Wikipedia. This approach can be applied to thousands of languages, which can be contrasted with machine translation, which is a supervision heavy approach and can be done for about 100 languages. We also develop a ranking algorithm that makes use of language similarity metrics to automatically select a good LWL, and show that this significantly improves classification of SWLs' documents, performing comparably to the best bridge possible. 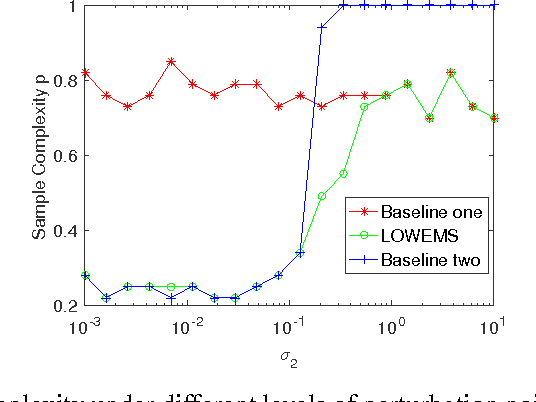 Low-rank matrix factorizations arise in a wide variety of applications -- including recommendation systems, topic models, and source separation, to name just a few. In these and many other applications, it has been widely noted that by incorporating temporal information and allowing for the possibility of time-varying models, significant improvements are possible in practice. However, despite the reported superior empirical performance of these dynamic models over their static counterparts, there is limited theoretical justification for introducing these more complex models. In this paper we aim to address this gap by studying the problem of recovering a dynamically evolving low-rank matrix from incomplete observations. First, we propose the locally weighted matrix smoothing (LOWEMS) framework as one possible approach to dynamic matrix recovery. We then establish error bounds for LOWEMS in both the {\em matrix sensing} and {\em matrix completion} observation models. Our results quantify the potential benefits of exploiting dynamic constraints both in terms of recovery accuracy and sample complexity. To illustrate these benefits we provide both synthetic and real-world experimental results. 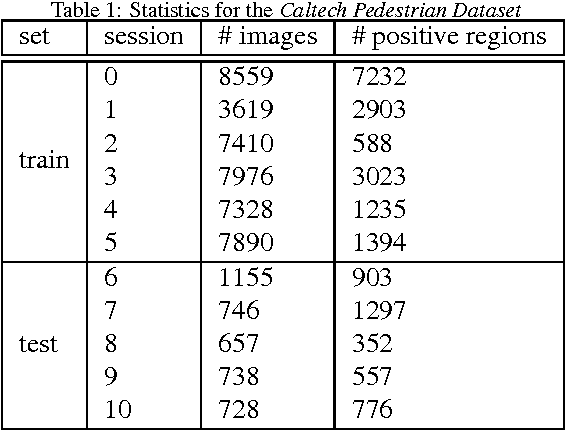 Pedestrian detection is a popular research topic due to its paramount importance for a number of applications, especially in the fields of automotive, surveillance and robotics. Despite the significant improvements, pedestrian detection is still an open challenge that calls for more and more accurate algorithms. In the last few years, deep learning and in particular convolutional neural networks emerged as the state of the art in terms of accuracy for a number of computer vision tasks such as image classification, object detection and segmentation, often outperforming the previous gold standards by a large margin. In this paper, we propose a pedestrian detection system based on deep learning, adapting a general-purpose convolutional network to the task at hand. By thoroughly analyzing and optimizing each step of the detection pipeline we propose an architecture that outperforms traditional methods, achieving a task accuracy close to that of state-of-the-art approaches, while requiring a low computational time. Finally, we tested the system on an NVIDIA Jetson TK1, a 192-core platform that is envisioned to be a forerunner computational brain of future self-driving cars. 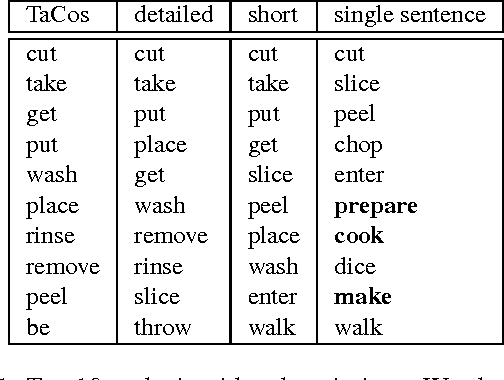 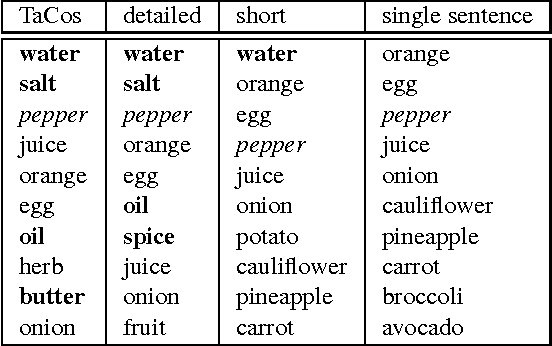 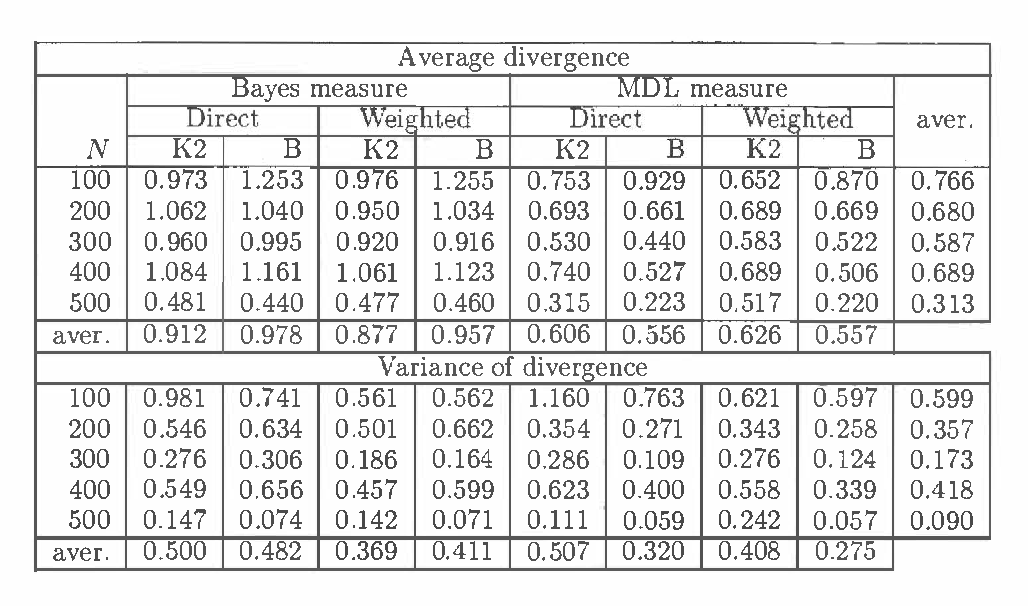 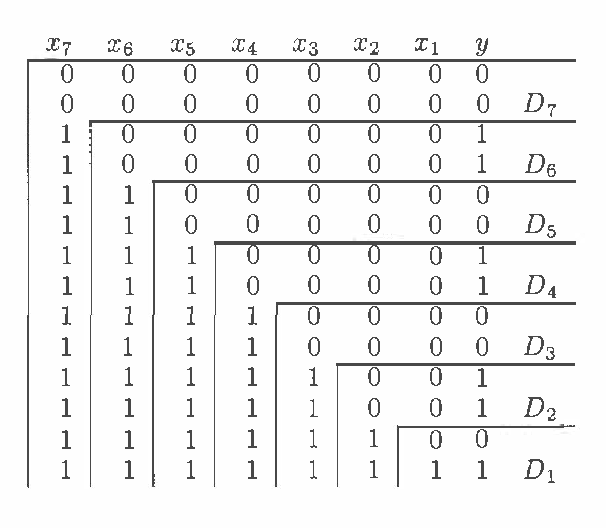 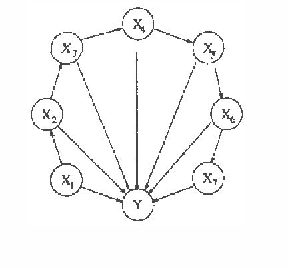 Bayesian belief network learning algorithms have three basic components: a measure of a network structure and a database, a search heuristic that chooses network structures to be considered, and a method of estimating the probability tables from the database. This paper contributes to all these three topics. The behavior of the Bayesian measure of Cooper and Herskovits and a minimum description length (MDL) measure are compared with respect to their properties for both limiting size and finite size databases. It is shown that the MDL measure has more desirable properties than the Bayesian measure when a distribution is to be learned. It is shown that selecting belief networks with certain minimallity properties is NP-hard. This result justifies the use of search heuristics instead of exact algorithms for choosing network structures to be considered. In some cases, a collection of belief networks can be represented by a single belief network which leads to a new kind of probability table estimation called smoothing. We argue that smoothing can be efficiently implemented by incorporating it in the search heuristic. Experimental results suggest that for learning probabilities of belief networks smoothing is helpful.