On the Topic of Jets: Disentangling Quarks and Gluons at Colliders 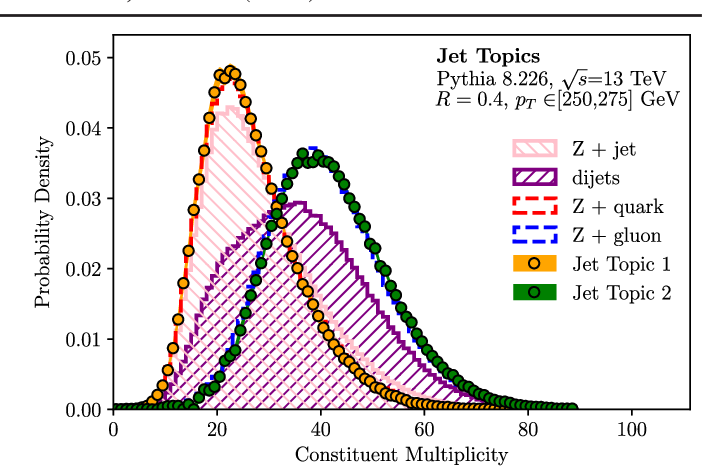 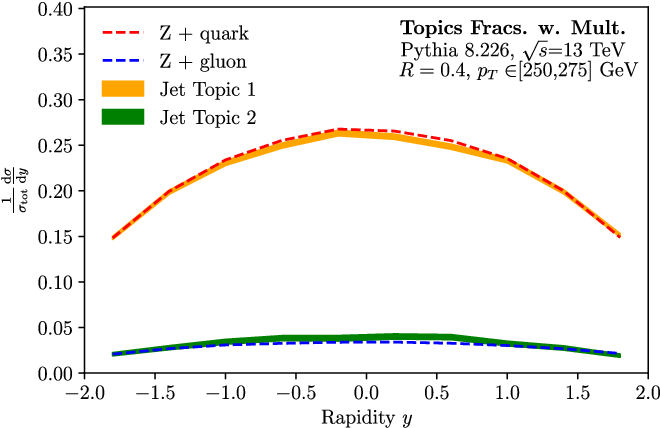 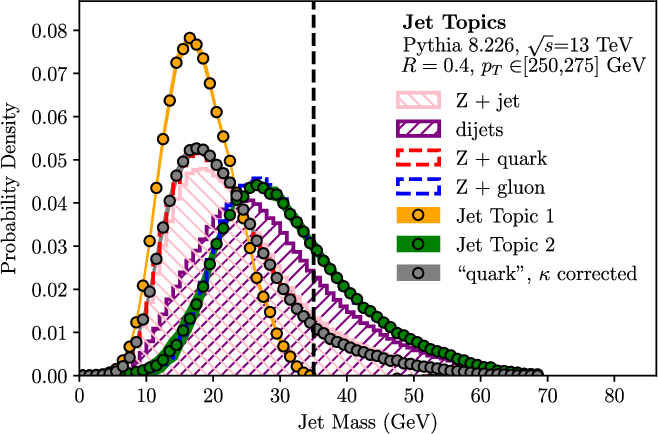 We introduce jet topics: a framework to identify underlying classes of jets from collider data. Because of a close mathematical relationship between distributions of observables in jets and emergent themes in sets of documents, we can apply recent techniques in "topic modeling" to extract jet topics from data with minimal or no input from simulation or theory. As a proof of concept with parton shower samples, we apply jet topics to determine separate quark and gluon jet distributions for constituent multiplicity. We also determine separate quark and gluon rapidity spectra from a mixed Z-plus-jet sample. While jet topics are defined directly from hadron-level multi-differential cross sections, one can also predict jet topics from first-principles theoretical calculations, with potential implications for how to define quark and gluon jets beyond leading-logarithmic accuracy. These investigations suggest that jet topics will be useful for extracting underlying jet distributions and fractions in a wide range of contexts at the Large Hadron Collider.

A Survey of Appearance Models in Visual Object Tracking 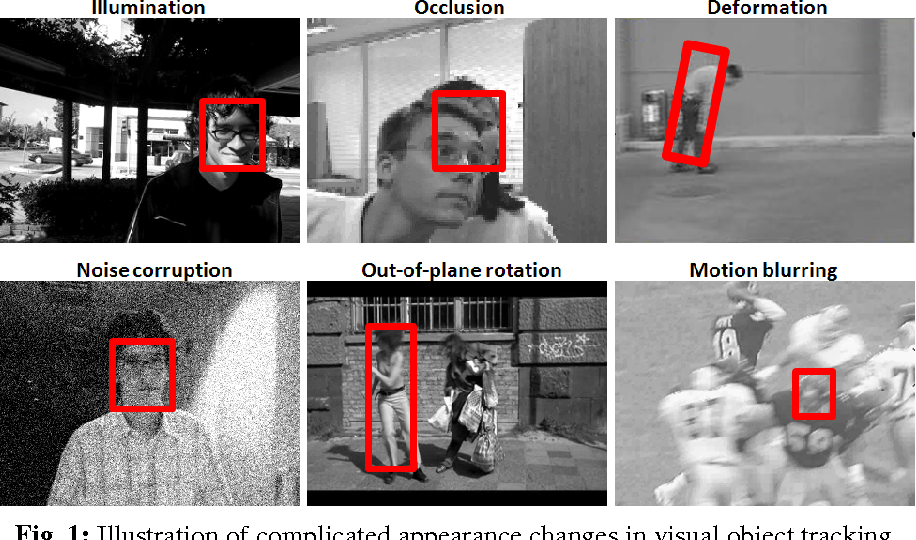 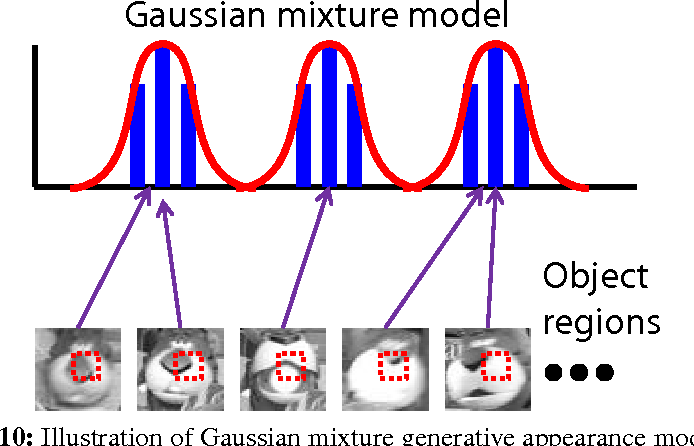 Visual object tracking is a significant computer vision task which can be applied to many domains such as visual surveillance, human computer interaction, and video compression. In the literature, researchers have proposed a variety of 2D appearance models. To help readers swiftly learn the recent advances in 2D appearance models for visual object tracking, we contribute this survey, which provides a detailed review of the existing 2D appearance models. In particular, this survey takes a module-based architecture that enables readers to easily grasp the key points of visual object tracking. In this survey, we first decompose the problem of appearance modeling into two different processing stages: visual representation and statistical modeling. Then, different 2D appearance models are categorized and discussed with respect to their composition modules. Finally, we address several issues of interest as well as the remaining challenges for future research on this topic. The contributions of this survey are four-fold. First, we review the literature of visual representations according to their feature-construction mechanisms (i.e., local and global). Second, the existing statistical modeling schemes for tracking-by-detection are reviewed according to their model-construction mechanisms: generative, discriminative, and hybrid generative-discriminative. Third, each type of visual representations or statistical modeling techniques is analyzed and discussed from a theoretical or practical viewpoint. Fourth, the existing benchmark resources (e.g., source code and video datasets) are examined in this survey.


* Appearing in ACM Transactions on Intelligent Systems and Technology, 2013 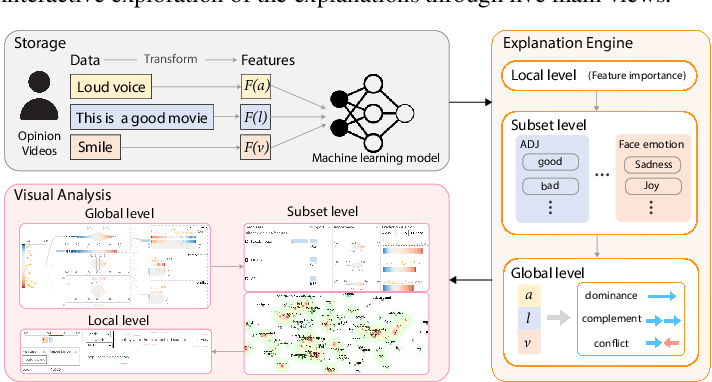 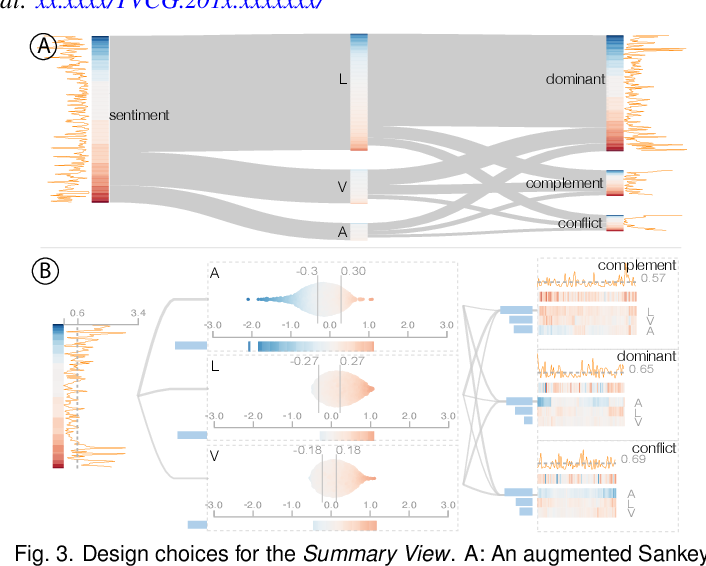 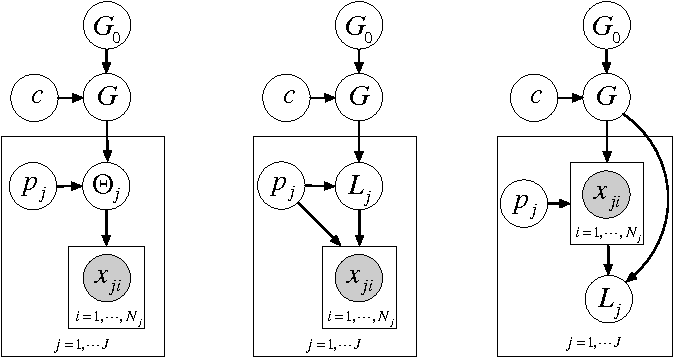 The seemingly disjoint problems of count and mixture modeling are united under the negative binomial (NB) process. A gamma process is employed to model the rate measure of a Poisson process, whose normalization provides a random probability measure for mixture modeling and whose marginalization leads to an NB process for count modeling. A draw from the NB process consists of a Poisson distributed finite number of distinct atoms, each of which is associated with a logarithmic distributed number of data samples. We reveal relationships between various count- and mixture-modeling distributions and construct a Poisson-logarithmic bivariate distribution that connects the NB and Chinese restaurant table distributions. Fundamental properties of the models are developed, and we derive efficient Bayesian inference. It is shown that with augmentation and normalization, the NB process and gamma-NB process can be reduced to the Dirichlet process and hierarchical Dirichlet process, respectively. These relationships highlight theoretical, structural and computational advantages of the NB process. A variety of NB processes, including the beta-geometric, beta-NB, marked-beta-NB, marked-gamma-NB and zero-inflated-NB processes, with distinct sharing mechanisms, are also constructed. These models are applied to topic modeling, with connections made to existing algorithms under Poisson factor analysis. Example results show the importance of inferring both the NB dispersion and probability parameters. 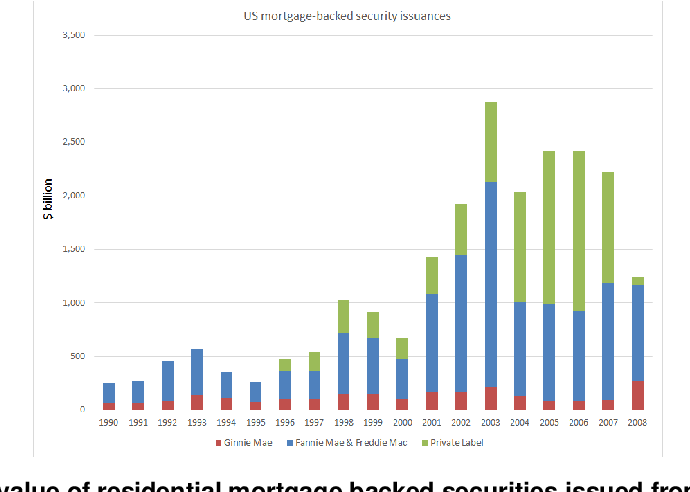 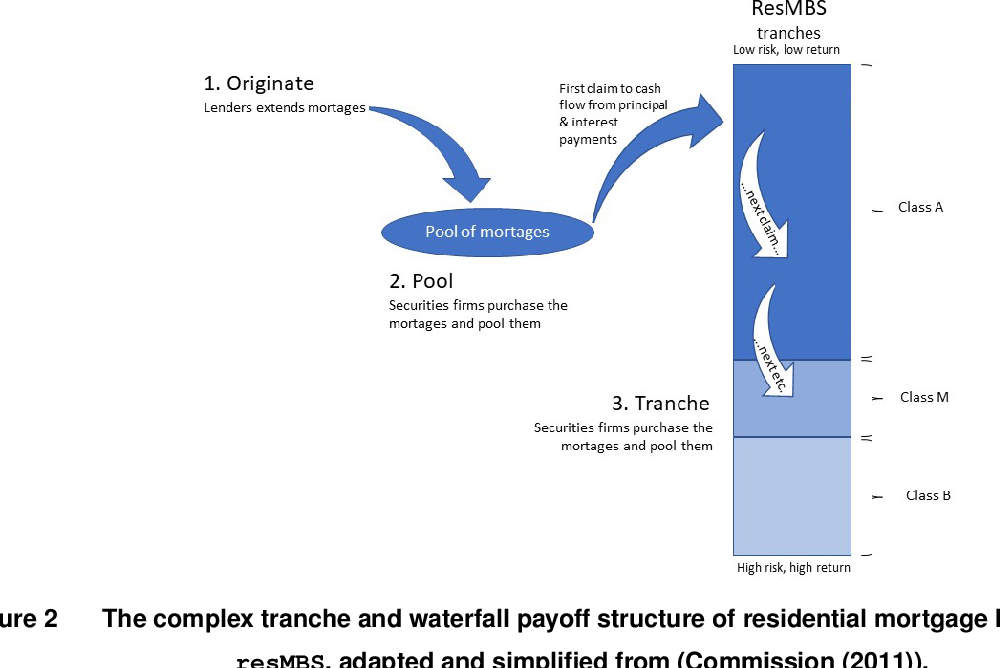 The objective of this paper is to explore how financial big data and machine learning methods can be applied to model and understand complex financial products. We focus on residential mortgage backed securities, resMBS, that were at the heart of the 2008 US financial crisis. The securities are contained within a prospectus and have a complex payoff structure. Multiple financial institutions form a supply chain to create the prospectuses. We provide insight into the performance of the resMBS securities through a series of increasingly complex models. First, models at the security level directly identify salient features of resMBS securities that impact their performance. Second, we extend the model to include prospectus level features. We are the first to demonstrate that the composition of the prospectus is associated with the performance of securities. Finally, to develop a deeper understanding of the role of the supply chain, we use unsupervised probabilistic methods, in particular, dynamic topics models (DTM), to understand community formation and temporal evolution along the chain. A comprehensive model provides insight into the impact of DTM communities on the issuance and evolution of prospectuses, and eventually the performance of resMBS securities. 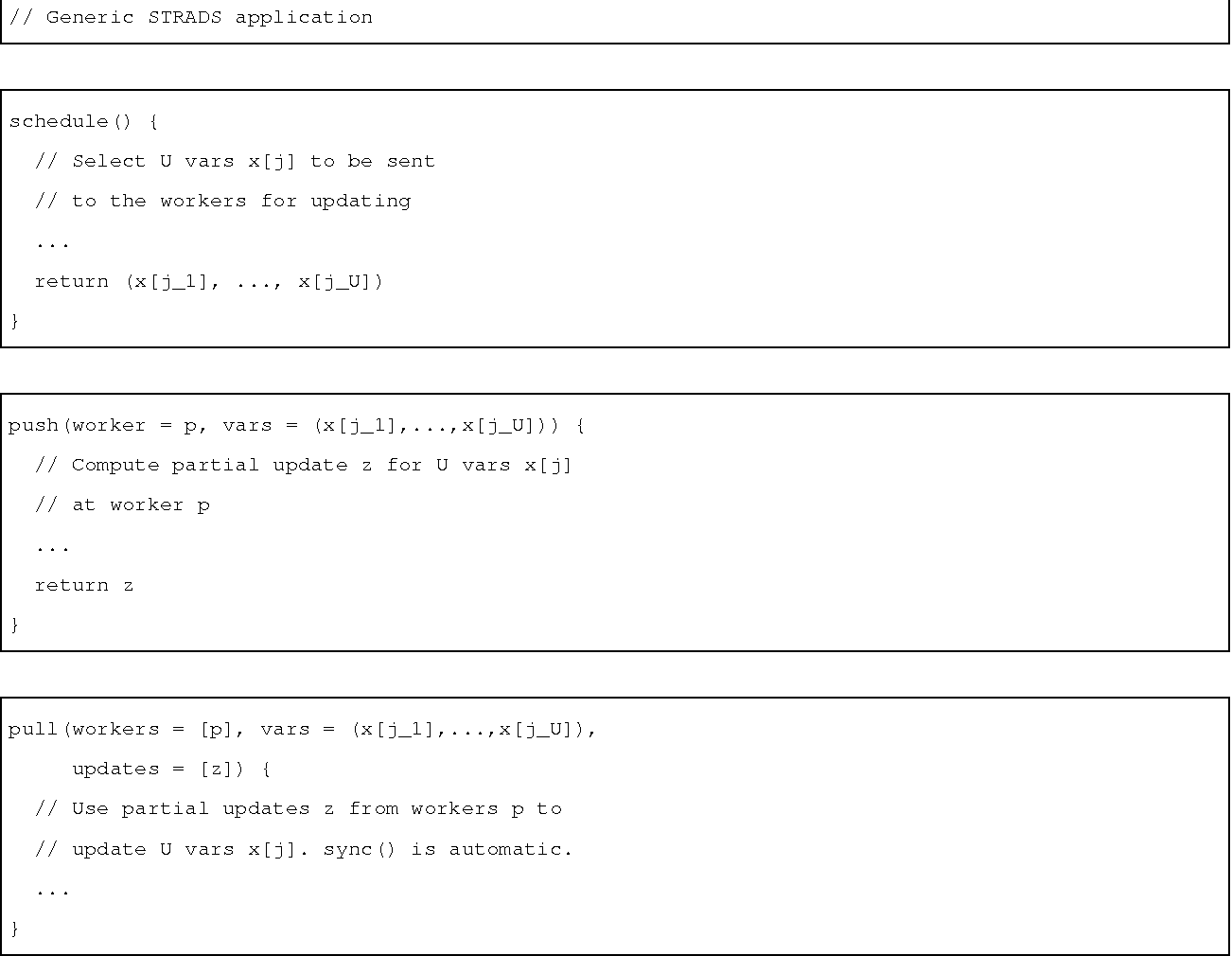 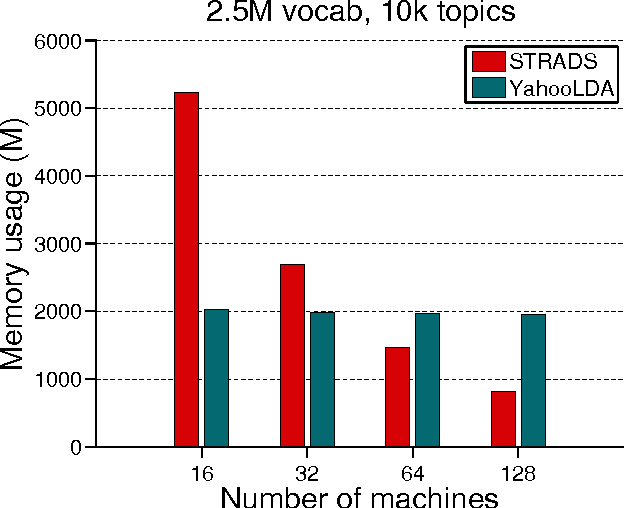 When training large machine learning models with many variables or parameters, a single machine is often inadequate since the model may be too large to fit in memory, while training can take a long time even with stochastic updates. A natural recourse is to turn to distributed cluster computing, in order to harness additional memory and processors. However, naive, unstructured parallelization of ML algorithms can make inefficient use of distributed memory, while failing to obtain proportional convergence speedups - or can even result in divergence. We develop a framework of primitives for dynamic model-parallelism, STRADS, in order to explore partitioning and update scheduling of model variables in distributed ML algorithms - thus improving their memory efficiency while presenting new opportunities to speed up convergence without compromising inference correctness. We demonstrate the efficacy of model-parallel algorithms implemented in STRADS versus popular implementations for Topic Modeling, Matrix Factorization and Lasso. 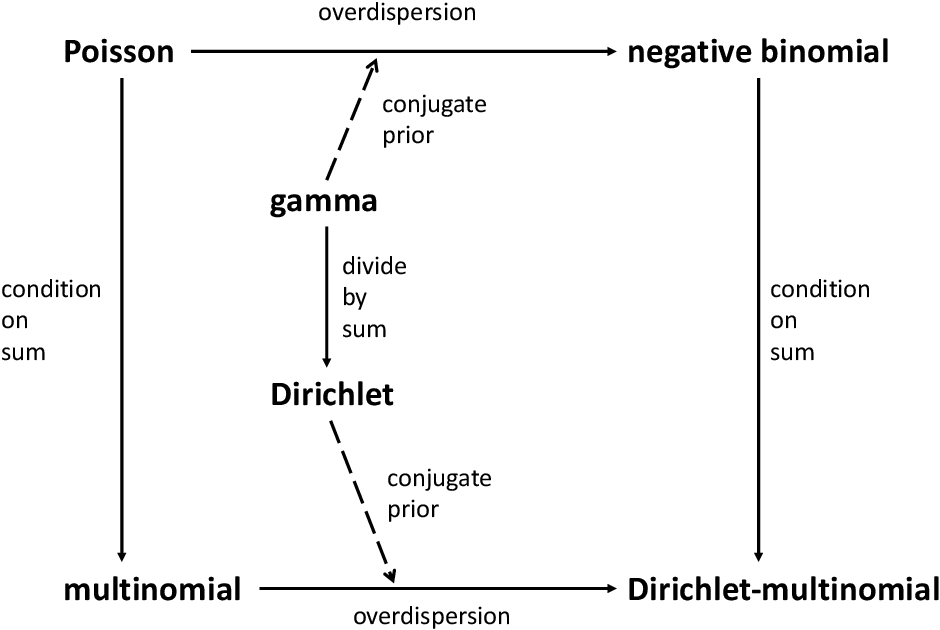 Count data take on non-negative integer values and are challenging to properly analyze using standard linear-Gaussian methods such as linear regression and principal components analysis. Generalized linear models enable direct modeling of counts in a regression context using distributions such as the Poisson and negative binomial. When counts contain only relative information, multinomial or Dirichlet-multinomial models can be more appropriate. We review some of the fundamental connections between multinomial and count models from probability theory, providing detailed proofs. These relationships are useful for methods development in applications such as topic modeling of text data and genomics.

We provide an explicit model of the causal mechanism in a structural causal model (SCM) with the goal of estimating counterfactual quantities of interest (CQIs). We propose some standard dependence structures, i.e. copulas, as base cases for the causal mechanism. While these base cases can be used to construct more interesting copulas, there are uncountably many copulas in general and so we formulate optimization problems for bounding the CQIs. As our ultimate goal is counterfactual reasoning in dynamic models which may have latent-states, we show by way of example that filtering / smoothing / sampling methods for these models can be integrated with our modeling of the causal mechanism. Specifically, we consider the "cheating-at-the-casino" application of a hidden Markov model and use linear programming (LP) to construct lower and upper bounds on the casino's winnings due to cheating. These bounds are considerably tighter when we constrain the copulas in the LPs to be time-independent. We can characterize the entire space of SCMs obeying counterfactual stability (CS), and we use it to negatively answer the open question of Oberst and Sontag [18] regarding the uniqueness of the Gumbel-max mechanism for modeling CS. Our work has applications in epidemiology and legal reasoning, and more generally in counterfactual off-policy evaluation, a topic of increasing interest in the reinforcement learning community.