Application of Rényi and Tsallis Entropies to Topic Modeling Optimization

This is full length article (draft version) where problem number of topics in Topic Modeling is discussed. We proposed idea that Renyi and Tsallis entropy can be used for identification of optimal number in large textual collections. We also report results of numerical experiments of Semantic stability for 4 topic models, which shows that semantic stability play very important role in problem topic number. The calculation of Renyi and Tsallis entropy based on thermodynamics approach. 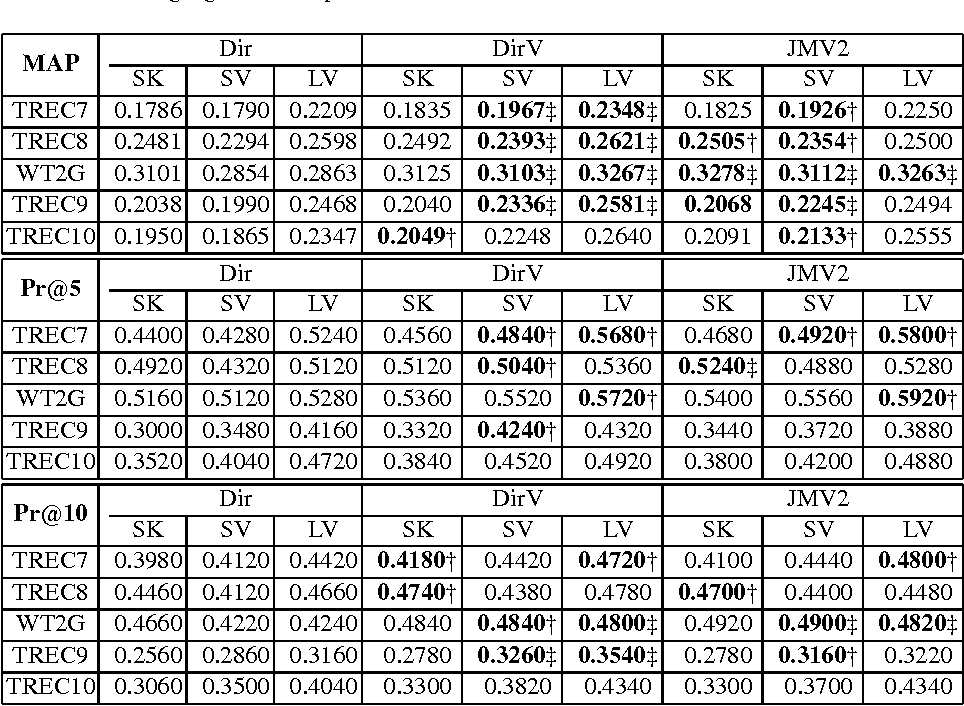 Term frequency normalization is a serious issue since lengths of documents are various. Generally, documents become long due to two different reasons - verbosity and multi-topicality. First, verbosity means that the same topic is repeatedly mentioned by terms related to the topic, so that term frequency is more increased than the well-summarized one. Second, multi-topicality indicates that a document has a broad discussion of multi-topics, rather than single topic. Although these document characteristics should be differently handled, all previous methods of term frequency normalization have ignored these differences and have used a simplified length-driven approach which decreases the term frequency by only the length of a document, causing an unreasonable penalization. To attack this problem, we propose a novel TF normalization method which is a type of partially-axiomatic approach. We first formulate two formal constraints that the retrieval model should satisfy for documents having verbose and multi-topicality characteristic, respectively. Then, we modify language modeling approaches to better satisfy these two constraints, and derive novel smoothing methods. Experimental results show that the proposed method increases significantly the precision for keyword queries, and substantially improves MAP (Mean Average Precision) for verbose queries.

What is Wrong with Topic Modeling? (and How to Fix it Using Search-based Software Engineering) 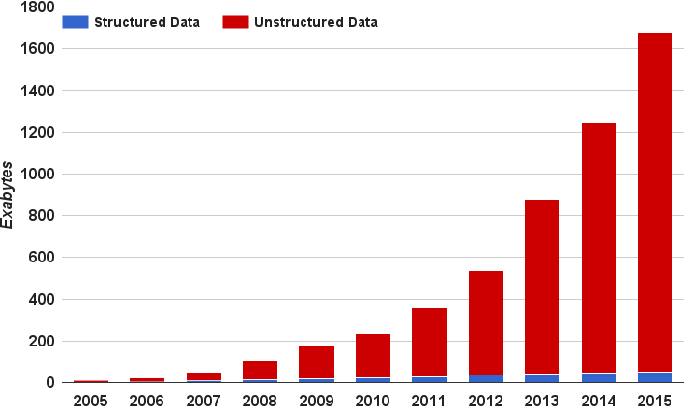 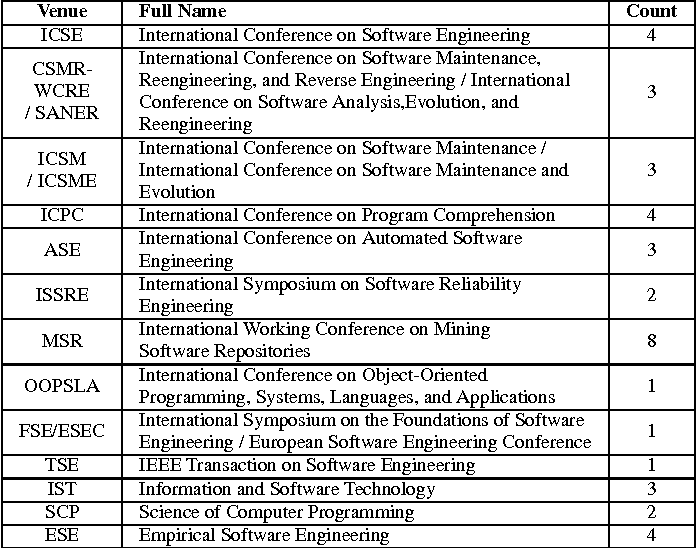 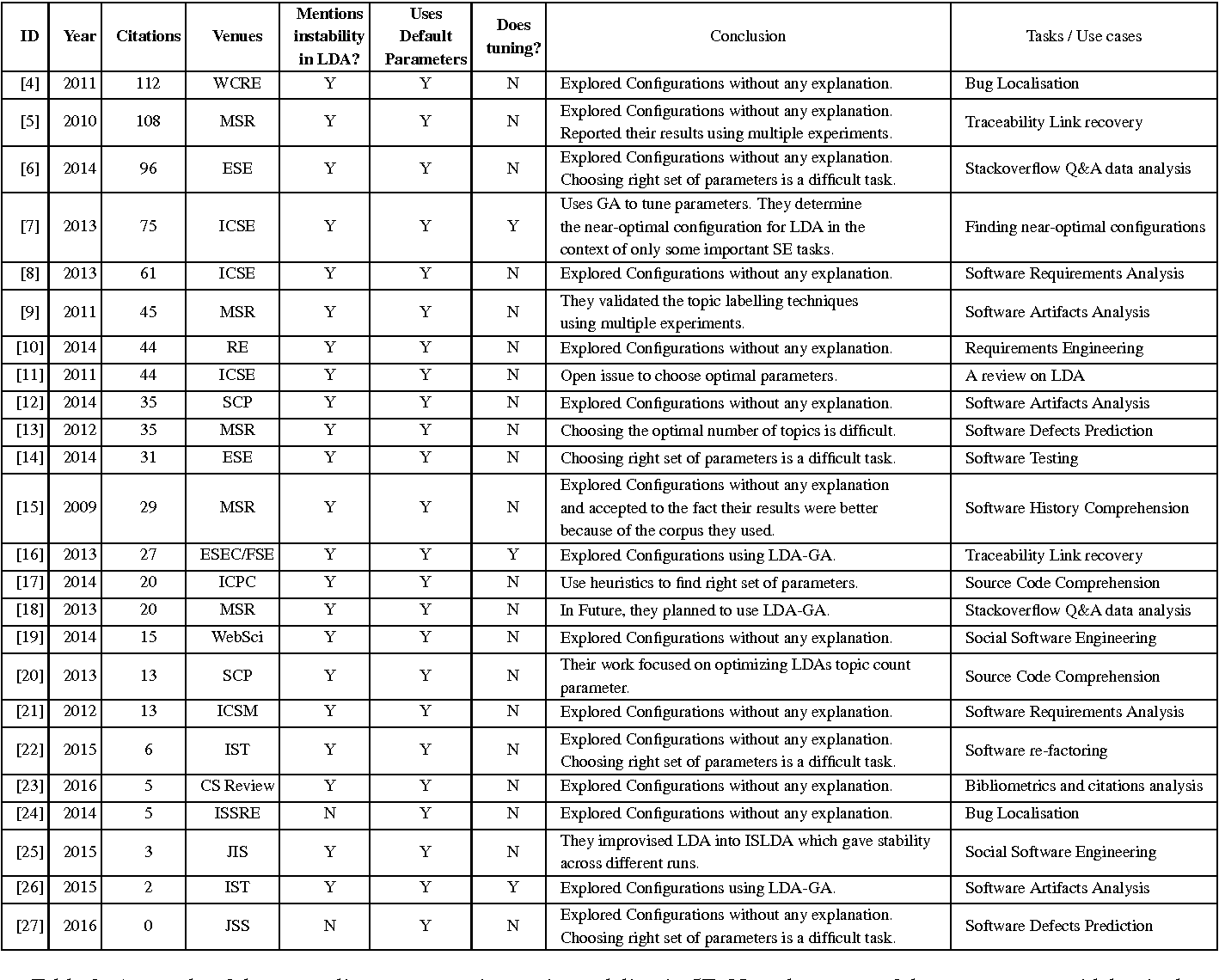 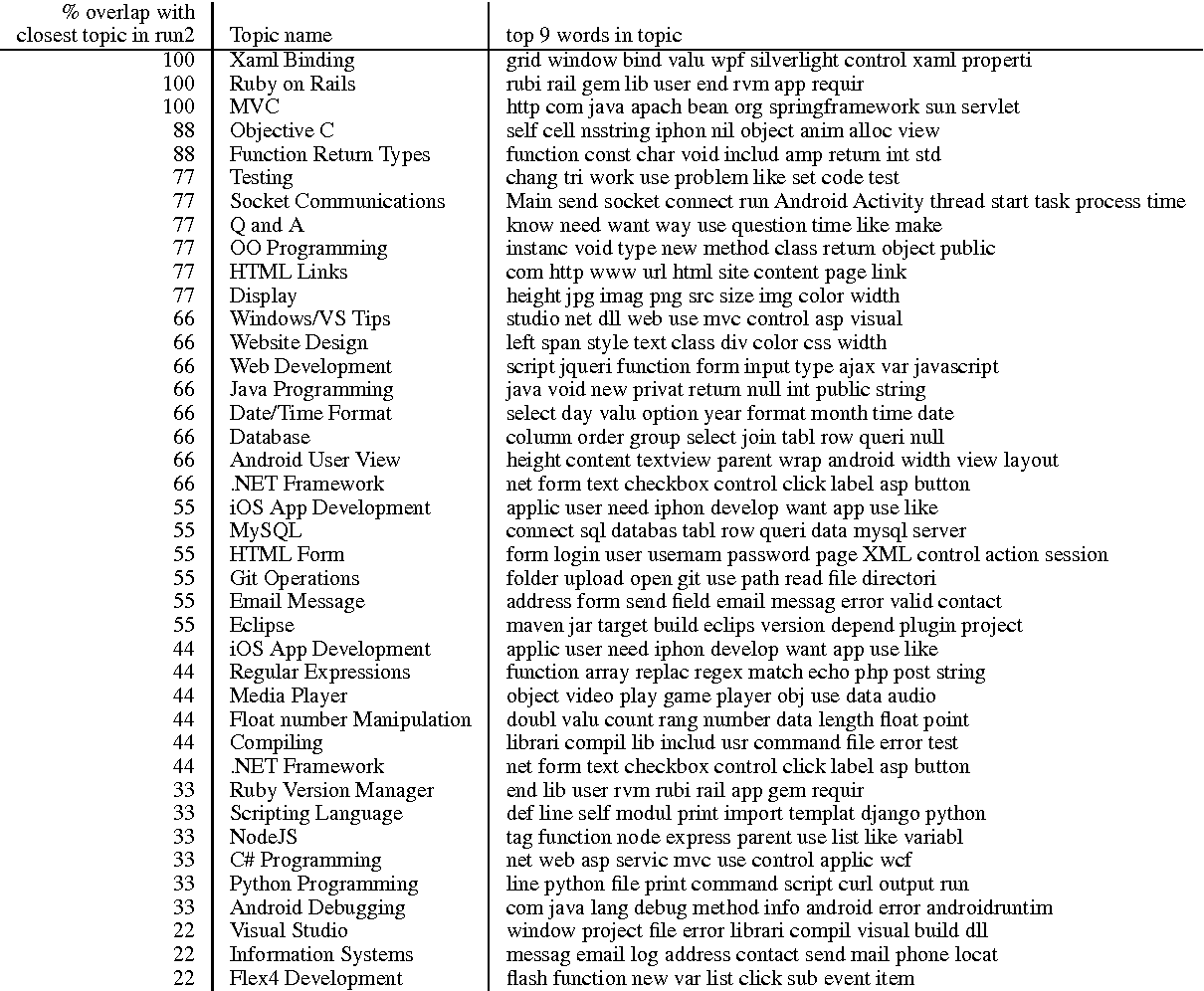 Context: Topic modeling finds human-readable structures in unstructured textual data. A widely used topic modeler is Latent Dirichlet allocation. When run on different datasets, LDA suffers from "order effects" i.e. different topics are generated if the order of training data is shuffled. Such order effects introduce a systematic error for any study. This error can relate to misleading results;specifically, inaccurate topic descriptions and a reduction in the efficacy of text mining classification results. Objective: To provide a method in which distributions generated by LDA are more stable and can be used for further analysis. Method: We use LDADE, a search-based software engineering tool that tunes LDA's parameters using DE (Differential Evolution). LDADE is evaluated on data from a programmer information exchange site (Stackoverflow), title and abstract text of thousands ofSoftware Engineering (SE) papers, and software defect reports from NASA. Results were collected across different implementations of LDA (Python+Scikit-Learn, Scala+Spark); across different platforms (Linux, Macintosh) and for different kinds of LDAs (VEM,or using Gibbs sampling). Results were scored via topic stability and text mining classification accuracy. Results: In all treatments: (i) standard LDA exhibits very large topic instability; (ii) LDADE's tunings dramatically reduce cluster instability; (iii) LDADE also leads to improved performances for supervised as well as unsupervised learning. Conclusion: Due to topic instability, using standard LDA with its "off-the-shelf" settings should now be depreciated. Also, in future, we should require SE papers that use LDA to test and (if needed) mitigate LDA topic instability. Finally, LDADE is a candidate technology for effectively and efficiently reducing that instability. 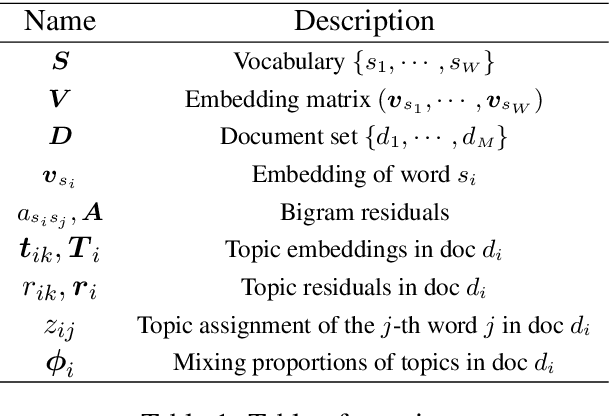 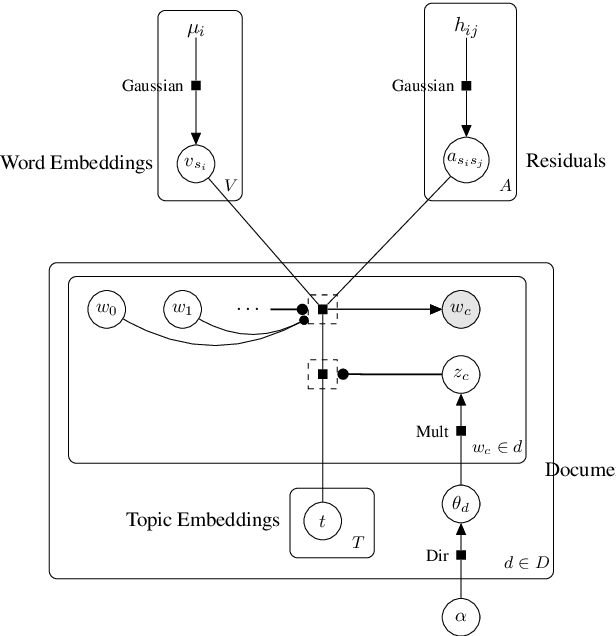 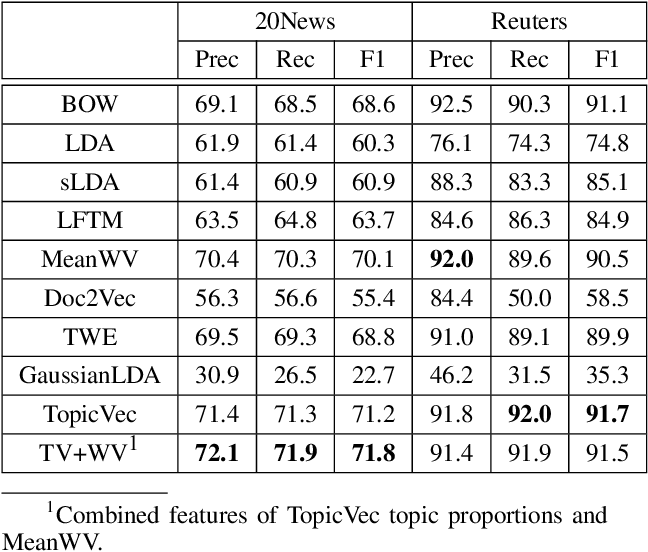 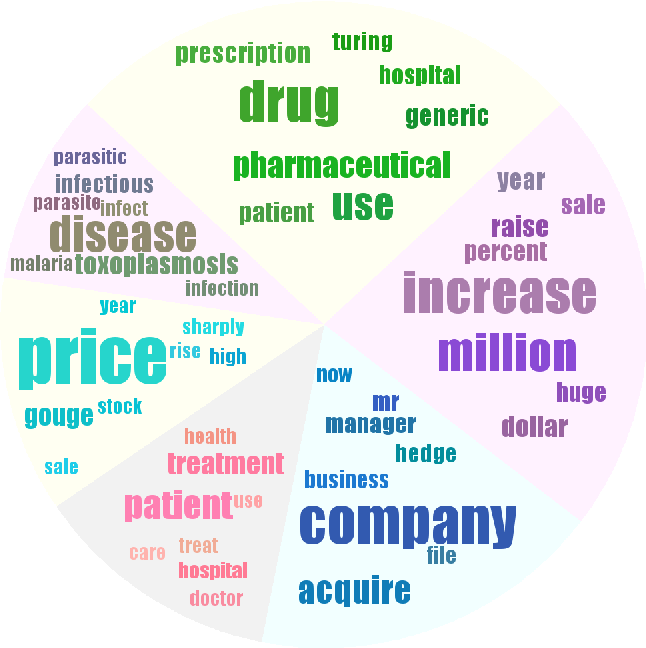 Word embedding maps words into a low-dimensional continuous embedding space by exploiting the local word collocation patterns in a small context window. On the other hand, topic modeling maps documents onto a low-dimensional topic space, by utilizing the global word collocation patterns in the same document. These two types of patterns are complementary. In this paper, we propose a generative topic embedding model to combine the two types of patterns. In our model, topics are represented by embedding vectors, and are shared across documents. The probability of each word is influenced by both its local context and its topic. A variational inference method yields the topic embeddings as well as the topic mixing proportions for each document. Jointly they represent the document in a low-dimensional continuous space. In two document classification tasks, our method performs better than eight existing methods, with fewer features. In addition, we illustrate with an example that our method can generate coherent topics even based on only one document. 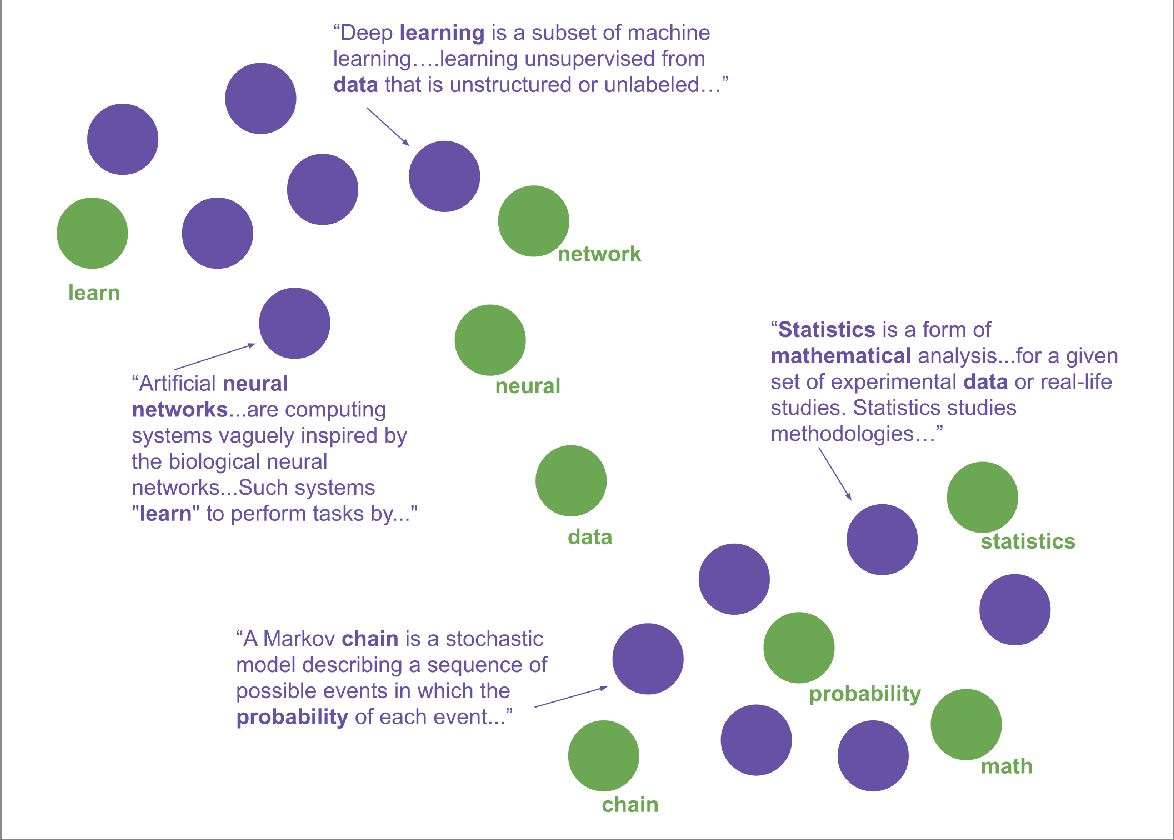 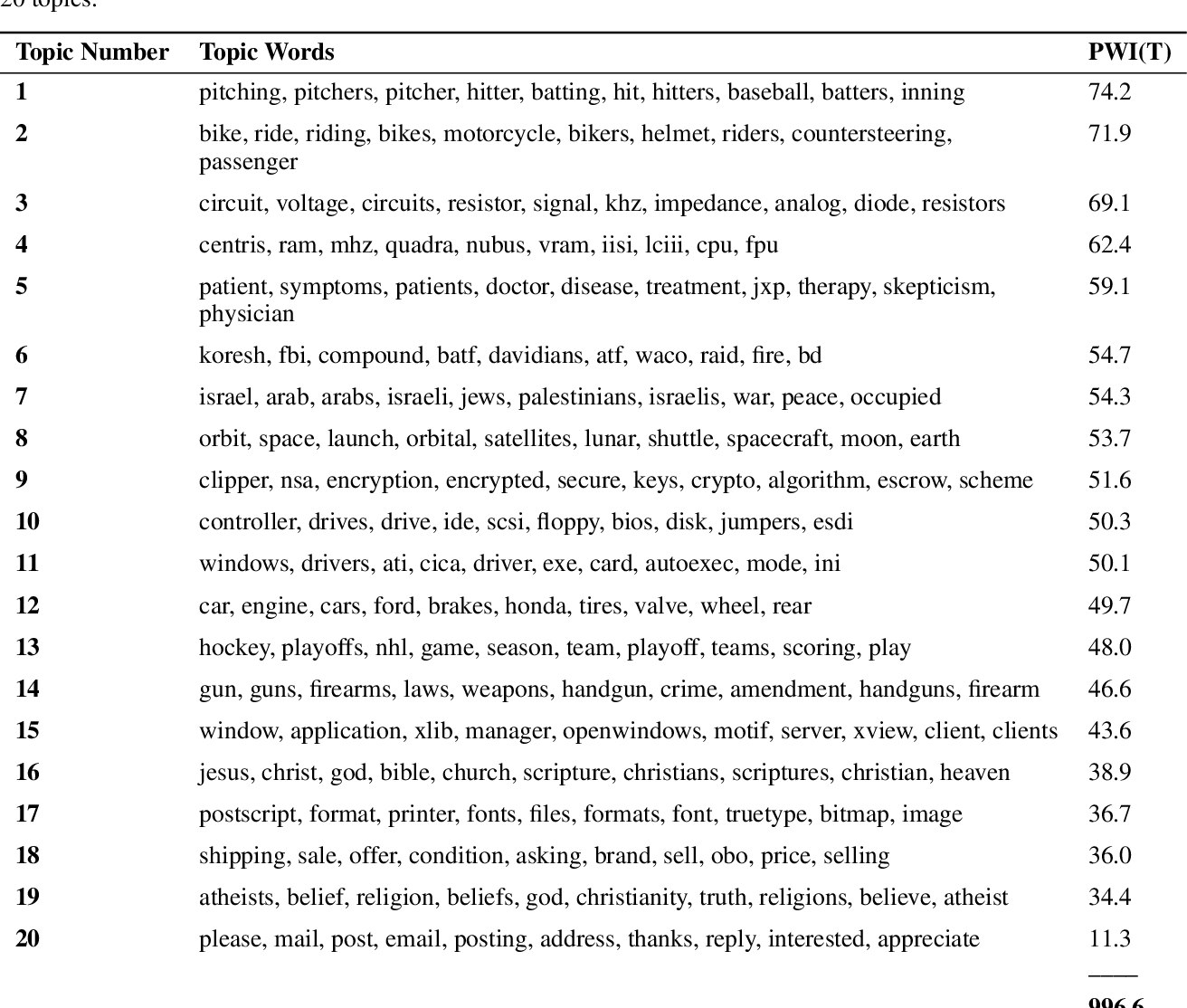 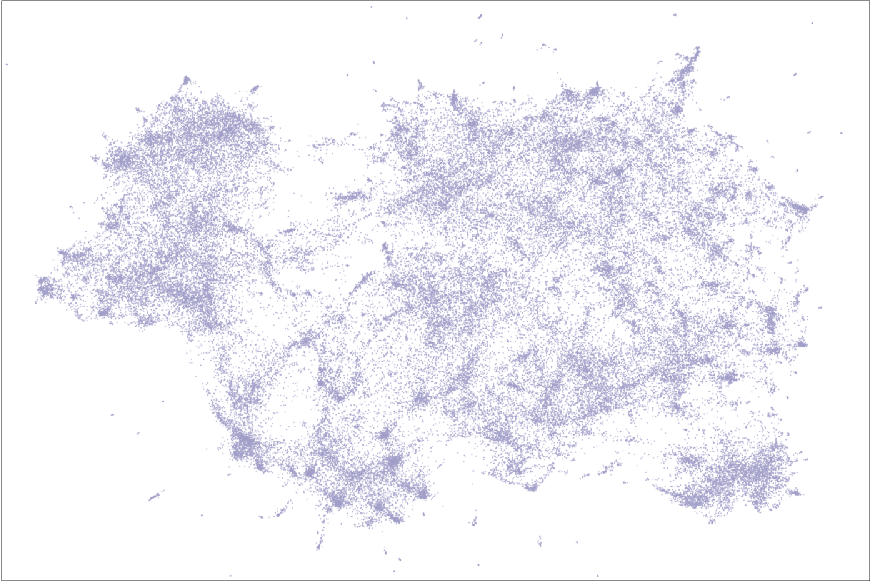 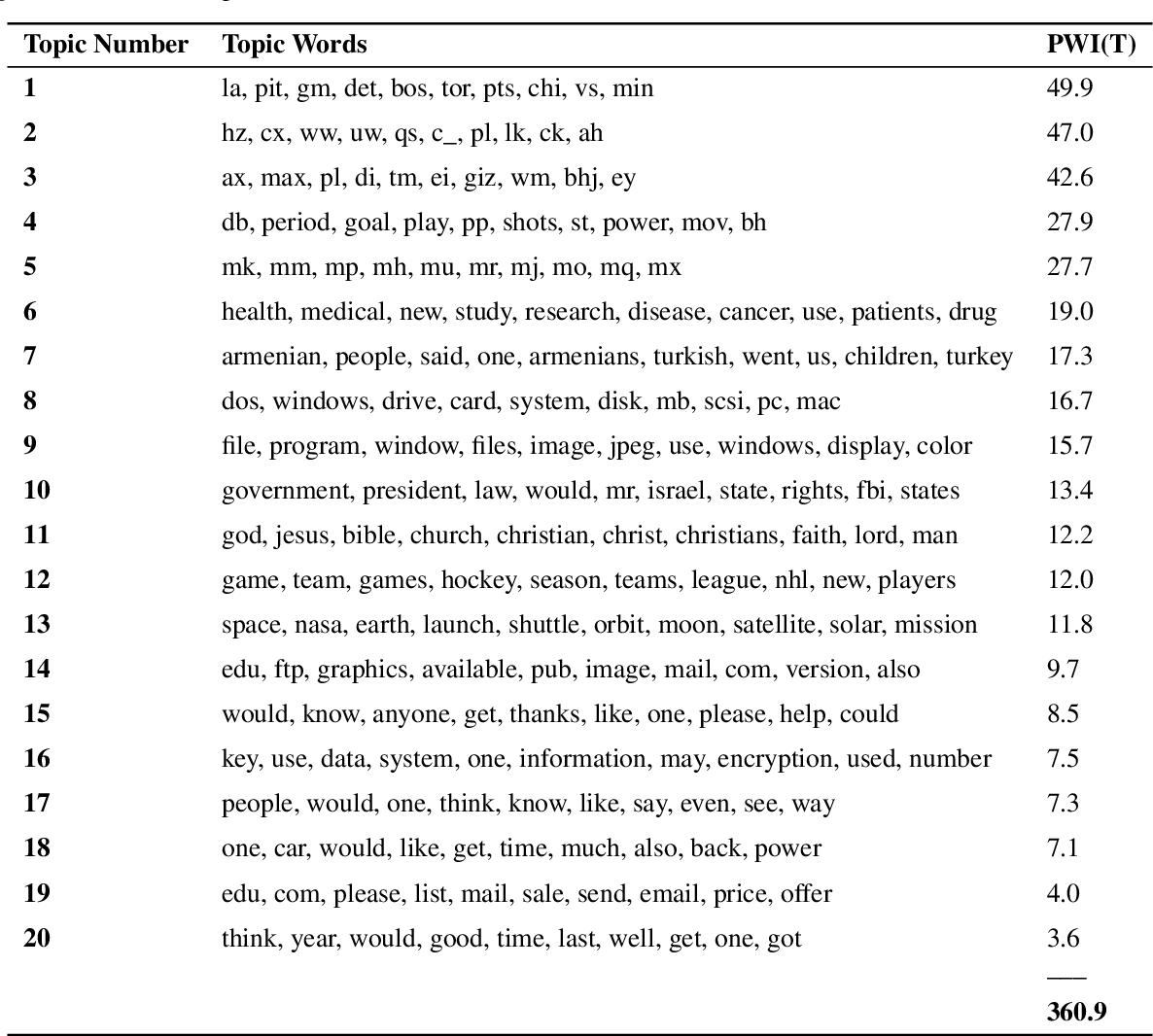 Topic modeling is used for discovering latent semantic structure, usually referred to as topics, in a large collection of documents. The most widely used methods are Latent Dirichlet Allocation and Probabilistic Latent Semantic Analysis. Despite their popularity they have several weaknesses. In order to achieve optimal results they often require the number of topics to be known, custom stop-word lists, stemming, and lemmatization. Additionally these methods rely on bag-of-words representation of documents which ignore the ordering and semantics of words. Distributed representations of documents and words have gained popularity due to their ability to capture semantics of words and documents. We present $\texttt{top2vec}$, which leverages joint document and word semantic embedding to find $\textit{topic vectors}$. This model does not require stop-word lists, stemming or lemmatization, and it automatically finds the number of topics. The resulting topic vectors are jointly embedded with the document and word vectors with distance between them representing semantic similarity. Our experiments demonstrate that $\texttt{top2vec}$ finds topics which are significantly more informative and representative of the corpus trained on than probabilistic generative models.

Exploring Topic-Metadata Relationships with the STM: A Bayesian Approach 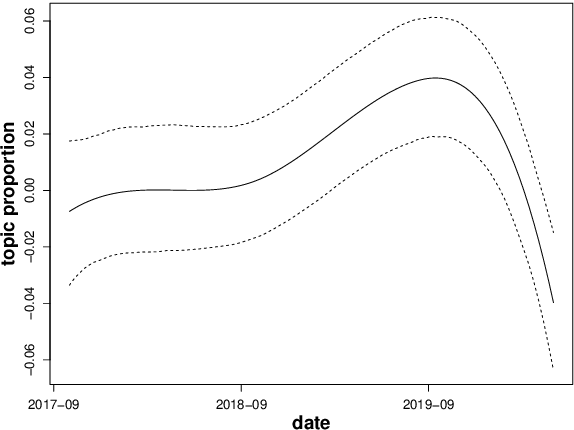 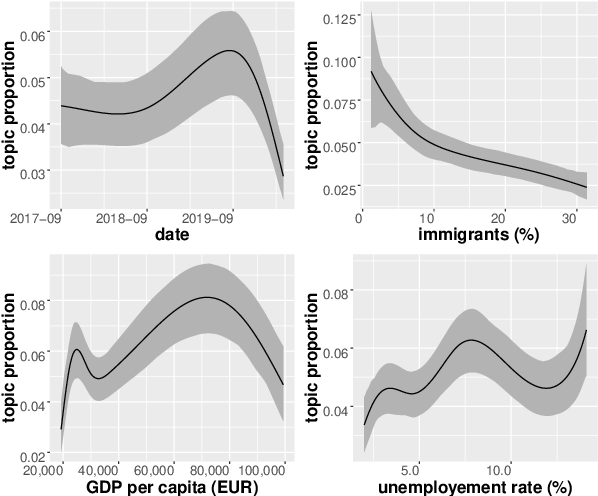 Topic models such as the Structural Topic Model (STM) estimate latent topical clusters within text. An important step in many topic modeling applications is to explore relationships between the discovered topical structure and metadata associated with the text documents. Methods used to estimate such relationships must take into account that the topical structure is not directly observed, but instead being estimated itself. The authors of the STM, for instance, perform repeated OLS regressions of sampled topic proportions on metadata covariates by using a Monte Carlo sampling technique known as the method of composition. In this paper, we propose two improvements: first, we replace OLS with more appropriate Beta regression. Second, we suggest a fully Bayesian approach instead of the current blending of frequentist and Bayesian methods. We demonstrate our improved methodology by exploring relationships between Twitter posts by German members of parliament (MPs) and different metadata covariates. 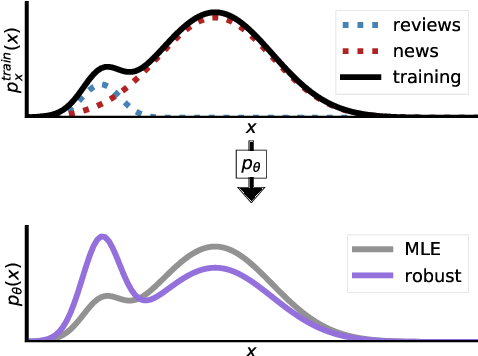 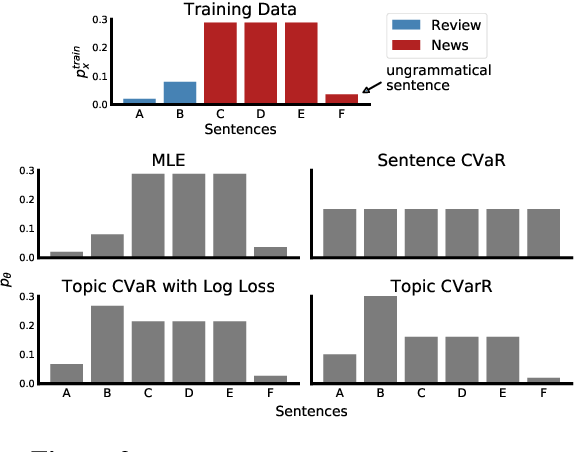 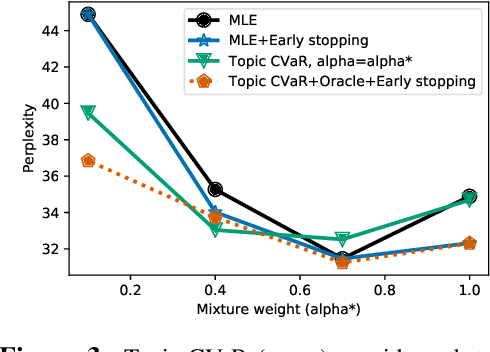 Language models are generally trained on data spanning a wide range of topics (e.g., news, reviews, fiction), but they might be applied to an a priori unknown target distribution (e.g., restaurant reviews). In this paper, we first show that training on text outside the test distribution can degrade test performance when using standard maximum likelihood (MLE) training. To remedy this without the knowledge of the test distribution, we propose an approach which trains a model that performs well over a wide range of potential test distributions. In particular, we derive a new distributionally robust optimization (DRO) procedure which minimizes the loss of the model over the worst-case mixture of topics with sufficient overlap with the training distribution. Our approach, called topic conditional value at risk (topic CVaR), obtains a 5.5 point perplexity reduction over MLE when the language models are trained on a mixture of Yelp reviews and news and tested only on reviews. 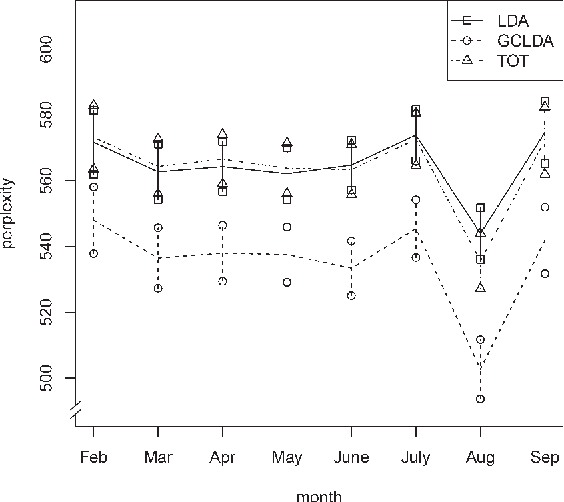 We consider the problem of modeling temporal textual data taking endogenous and exogenous processes into account. Such text documents arise in real world applications, including job advertisements and economic news articles, which are influenced by the fluctuations of the general economy. We propose a hierarchical Bayesian topic model which imposes a "group-correlated" hierarchical structure on the evolution of topics over time incorporating both processes, and show that this model can be estimated from Markov chain Monte Carlo sampling methods. We further demonstrate that this model captures the intrinsic relationships between the topic distribution and the time-dependent factors, and compare its performance with latent Dirichlet allocation (LDA) and two other related models. The model is applied to two collections of documents to illustrate its empirical performance: online job advertisements from DirectEmployers Association and journalists' postings on BusinessInsider.com. 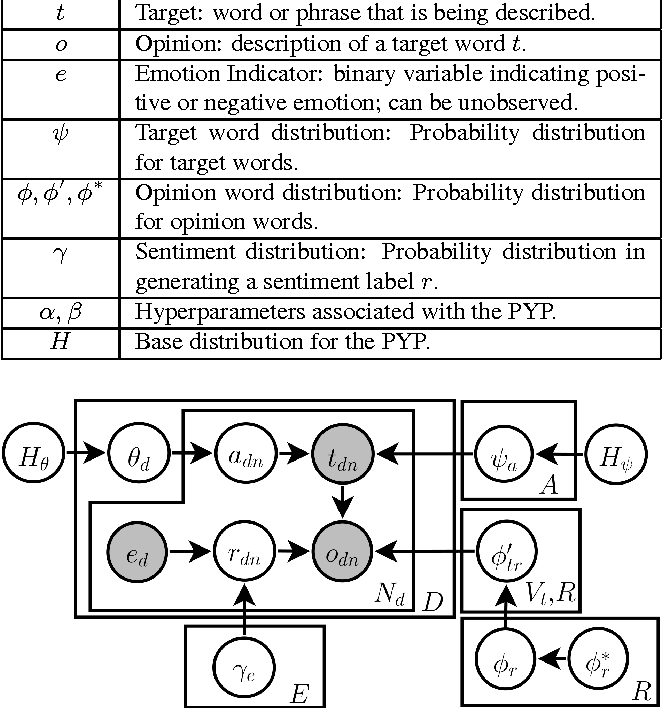 Aspect-based opinion mining is widely applied to review data to aggregate or summarize opinions of a product, and the current state-of-the-art is achieved with Latent Dirichlet Allocation (LDA)-based model. Although social media data like tweets are laden with opinions, their "dirty" nature (as natural language) has discouraged researchers from applying LDA-based opinion model for product review mining. Tweets are often informal, unstructured and lacking labeled data such as categories and ratings, making it challenging for product opinion mining. In this paper, we propose an LDA-based opinion model named Twitter Opinion Topic Model (TOTM) for opinion mining and sentiment analysis. TOTM leverages hashtags, mentions, emoticons and strong sentiment words that are present in tweets in its discovery process. It improves opinion prediction by modeling the target-opinion interaction directly, thus discovering target specific opinion words, neglected in existing approaches. Moreover, we propose a new formulation of incorporating sentiment prior information into a topic model, by utilizing an existing public sentiment lexicon. This is novel in that it learns and updates with the data. We conduct experiments on 9 million tweets on electronic products, and demonstrate the improved performance of TOTM in both quantitative evaluations and qualitative analysis. We show that aspect-based opinion analysis on massive volume of tweets provides useful opinions on products.

Recommendation System based on Semantic Scholar Mining and Topic modeling: A behavioral analysis of researchers from six conferences 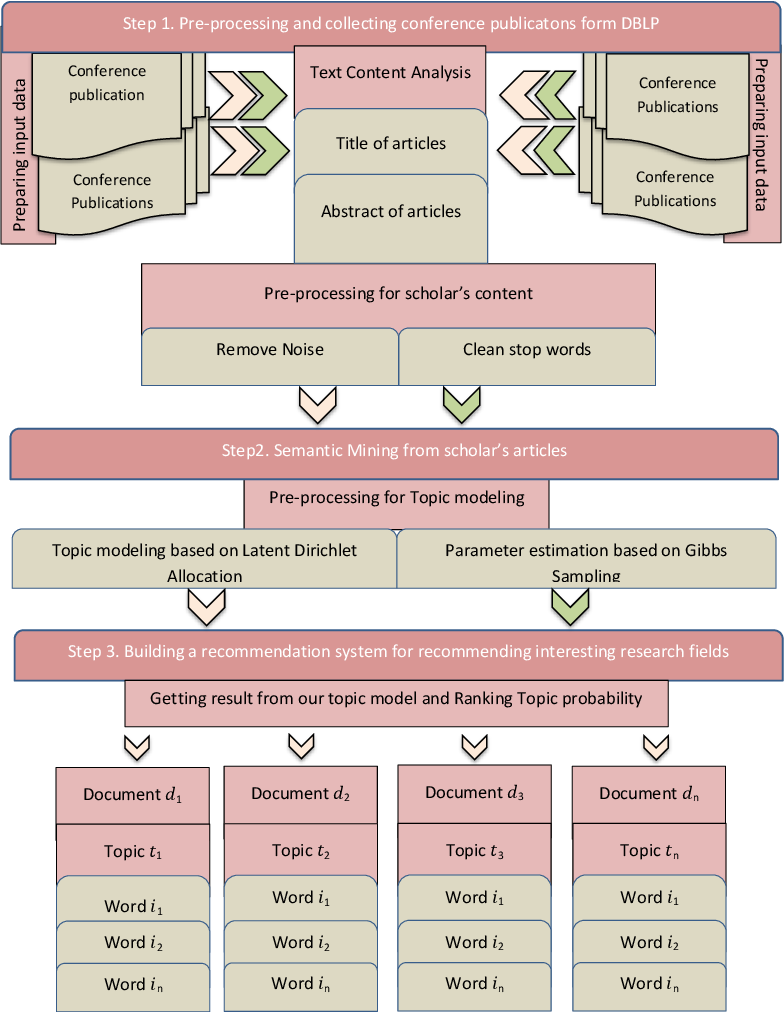 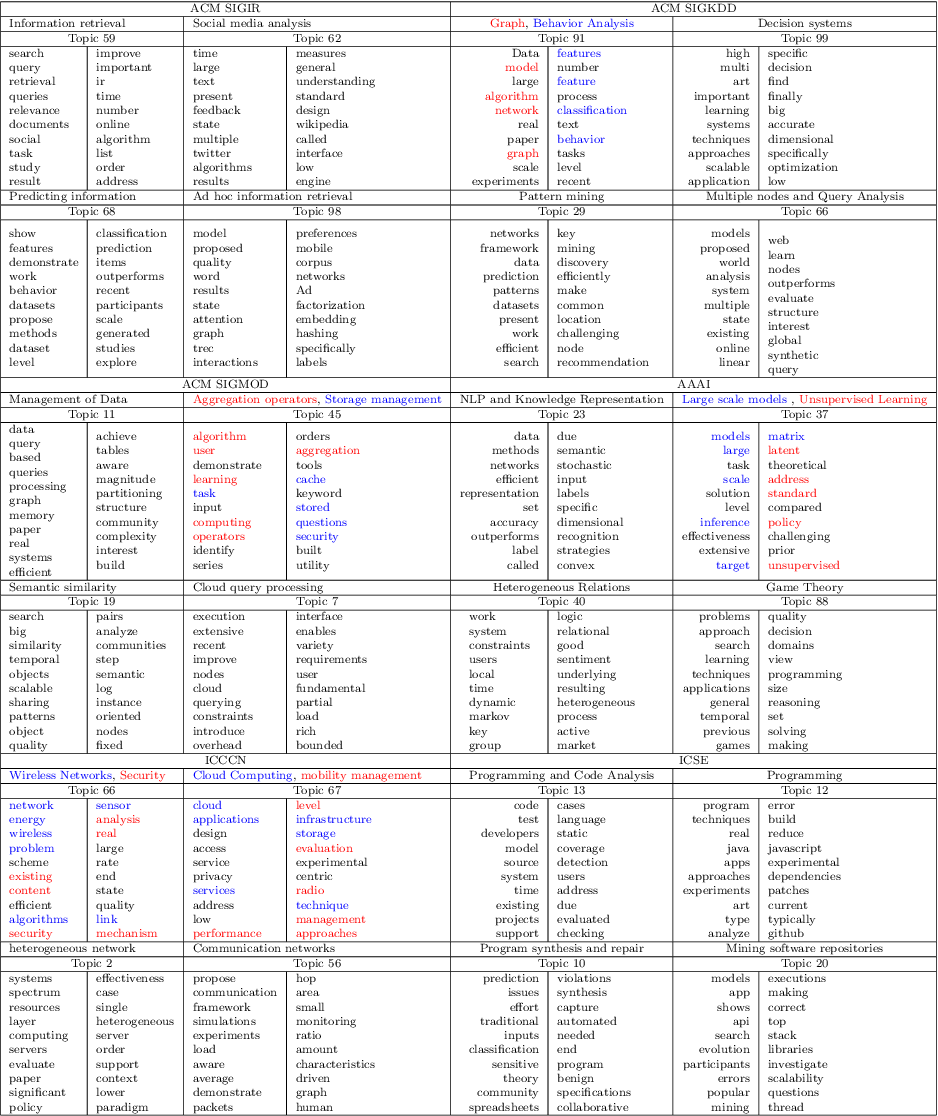 Recommendation systems have an important place to help online users in the internet society. Recommendation Systems in computer science are of very practical use these days in various aspects of the Internet portals, such as social networks, and library websites. There are several approaches to implement recommendation systems, Latent Dirichlet Allocation (LDA) is one the popular techniques in Topic Modeling. Recently, researchers have proposed many approaches based on Recommendation Systems and LDA. According to importance of the subject, in this paper we discover the trends of the topics and find relationship between LDA topics and Scholar-Context-documents. In fact, We apply probabilistic topic modeling based on Gibbs sampling algorithms for a semantic mining from six conference publications in computer science from DBLP dataset. According to our experimental results, our semantic framework can be effective to help organizations to better organize these conferences and cover future research topics.