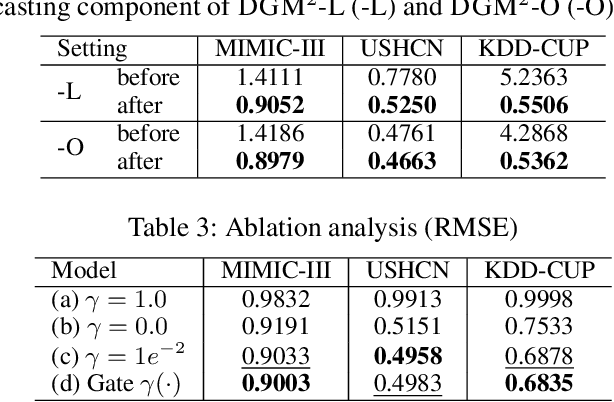 Forecasting on sparse multivariate time series (MTS) aims to model the predictors of future values of time series given their incomplete past, which is important for many emerging applications. However, most existing methods process MTS's individually, and do not leverage the dynamic distributions underlying the MTS's, leading to sub-optimal results when the sparsity is high. To address this challenge, we propose a novel generative model, which tracks the transition of latent clusters, instead of isolated feature representations, to achieve robust modeling. It is characterized by a newly designed dynamic Gaussian mixture distribution, which captures the dynamics of clustering structures, and is used for emitting timeseries. The generative model is parameterized by neural networks. A structured inference network is also designed for enabling inductive analysis. A gating mechanism is further introduced to dynamically tune the Gaussian mixture distributions. Extensive experimental results on a variety of real-life datasets demonstrate the effectiveness of our method. 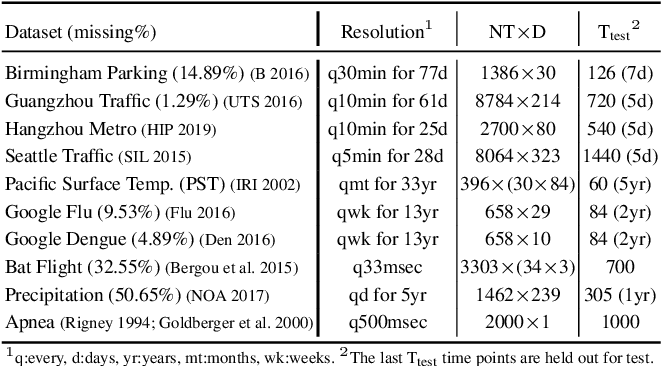 We introduce deep switching auto-regressive factorization (DSARF), a deep generative model for spatio-temporal data with the capability to unravel recurring patterns in the data and perform robust short- and long-term predictions. Similar to other factor analysis methods, DSARF approximates high dimensional data by a product between time dependent weights and spatially dependent factors. These weights and factors are in turn represented in terms of lower dimensional latent variables that are inferred using stochastic variational inference. DSARF is different from the state-of-the-art techniques in that it parameterizes the weights in terms of a deep switching vector auto-regressive likelihood governed with a Markovian prior, which is able to capture the non-linear inter-dependencies among weights to characterize multimodal temporal dynamics. This results in a flexible hierarchical deep generative factor analysis model that can be extended to (i) provide a collection of potentially interpretable states abstracted from the process dynamics, and (ii) perform short- and long-term vector time series prediction in a complex multi-relational setting. Our extensive experiments, which include simulated data and real data from a wide range of applications such as climate change, weather forecasting, traffic, infectious disease spread and nonlinear physical systems attest the superior performance of DSARF in terms of long- and short-term prediction error, when compared with the state-of-the-art methods. 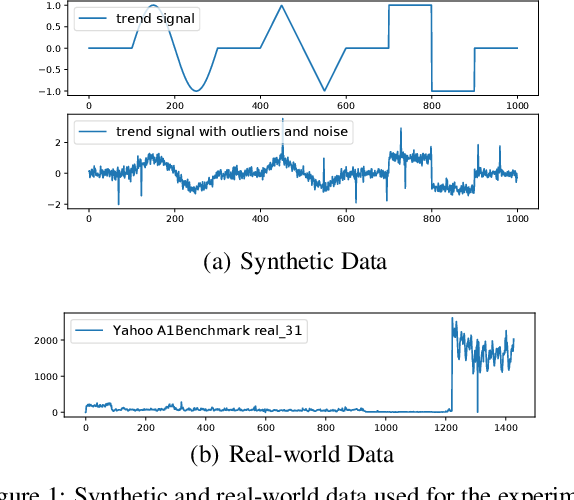 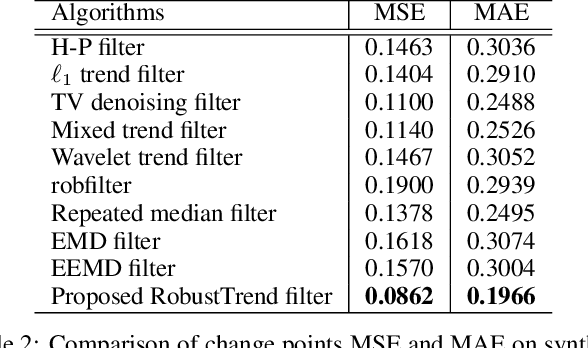 Extracting the underlying trend signal is a crucial step to facilitate time series analysis like forecasting and anomaly detection. Besides noise signal, time series can contain not only outliers but also abrupt trend changes in real-world scenarios. To deal with these challenges, we propose a robust trend filtering algorithm based on robust statistics and sparse learning. Specifically, we adopt the Huber loss to suppress outliers, and utilize a combination of the first order and second order difference on the trend component as regularization to capture both slow and abrupt trend changes. Furthermore, an efficient method is designed to solve the proposed robust trend filtering based on majorization minimization (MM) and alternative direction method of multipliers (ADMM). We compared our proposed robust trend filter with other nine state-of-the-art trend filtering algorithms on both synthetic and real-world datasets. The experiments demonstrate that our algorithm outperforms existing methods.

Segmenting biologging time series of animals on multiple temporal scales is an essential step that requires complex techniques with careful parameterization and possibly cross-domain expertise. Yet, there is a lack of visual-interactive tools that strongly support such multi-scale segmentation. To close this gap, we present our MultiSegVA platform for interactively defining segmentation techniques and parameters on multiple temporal scales. MultiSegVA primarily contributes tailored, visual-interactive means and visual analytics paradigms for segmenting unlabeled time series on multiple scales. Further, to flexibly compose the multi-scale segmentation, the platform contributes a new visual query language that links a variety of segmentation techniques. To illustrate our approach, we present a domain-oriented set of segmentation techniques derived in collaboration with movement ecologists. We demonstrate the applicability and usefulness of MultiSegVA in two real-world use cases from movement ecology, related to behavior analysis after environment-aware segmentation, and after progressive clustering. Expert feedback from movement ecologists shows the effectiveness of tailored visual-interactive means and visual analytics paradigms at segmenting multi-scale data, enabling them to perform semantically meaningful analyses. A third use case demonstrates that MultiSegVA is generalizable to other domains.

In this work, a probabilistic damage detection and identification scheme using stochastic time series models in the context of acousto-ultrasound guided wave-based SHM is proposed, and its performance is assessed experimentally. In order to simplify the damage detection and identification process, model parameters are modified based on the singular value decomposition (SVD) as well as the principal component analysis (PCA)-based truncation approach. The modified model parameters are then used to estimate a statistical characteristic quantity that follows a chi-squared distribution. A probabilistic threshold is used instead of a user-defined margin to facilitate automatic damage detection. The method's effectiveness is assessed via multiple experiments using both metallic and composite coupons and under various damage scenarios using damage intersecting and damage non-intersecting paths. The results of the study confirm the high potential and effectiveness of the stochastic time series methods for guided wave-based damage detection and identification in a potentially automated way. 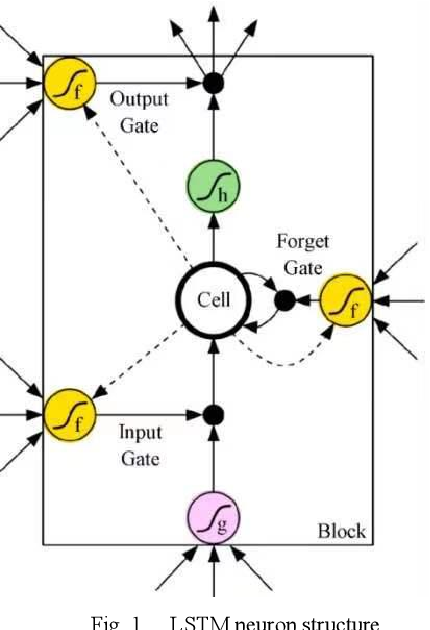 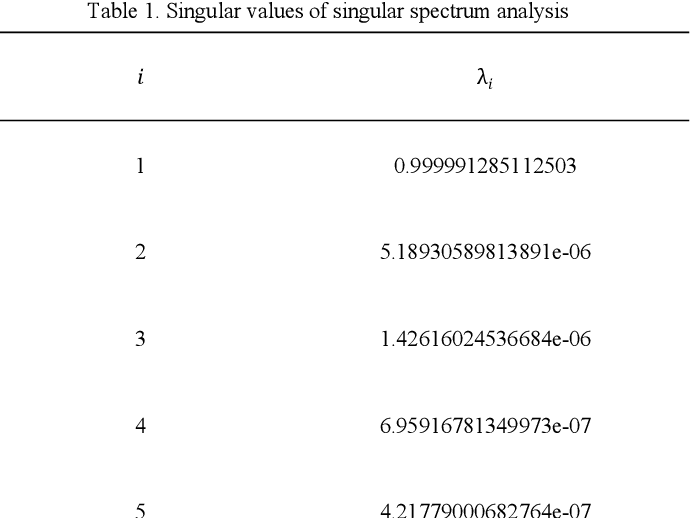 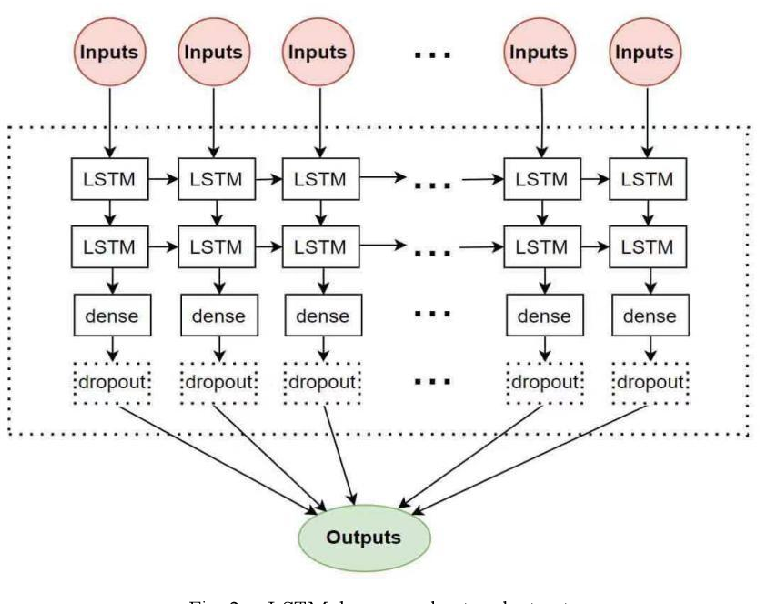 In order to further overcome the difficulties of the existing models in dealing with the non-stationary and nonlinear characteristics of high-frequency financial time series data, especially its weak generalization ability, this paper proposes an ensemble method based on data denoising methods, including the wavelet transform (WT) and singular spectrum analysis (SSA), and long-term short-term memory neural network (LSTM) to build a data prediction model, The financial time series is decomposed and reconstructed by WT and SSA to denoise. Under the condition of denoising, the smooth sequence with effective information is reconstructed. The smoothing sequence is introduced into LSTM and the predicted value is obtained. With the Dow Jones industrial average index (DJIA) as the research object, the closing price of the DJIA every five minutes is divided into short-term (1 hour), medium-term (3 hours) and long-term (6 hours) respectively. . Based on root mean square error (RMSE), mean absolute error (MAE), mean absolute percentage error (MAPE) and absolute percentage error standard deviation (SDAPE), the experimental results show that in the short-term, medium-term and long-term, data denoising can greatly improve the accuracy and stability of the prediction, and can effectively improve the generalization ability of LSTM prediction model. As WT and SSA can extract useful information from the original sequence and avoid overfitting, the hybrid model can better grasp the sequence pattern of the closing price of the DJIA. And the WT-LSTM model is better than the benchmark LSTM model and SSA-LSTM model. 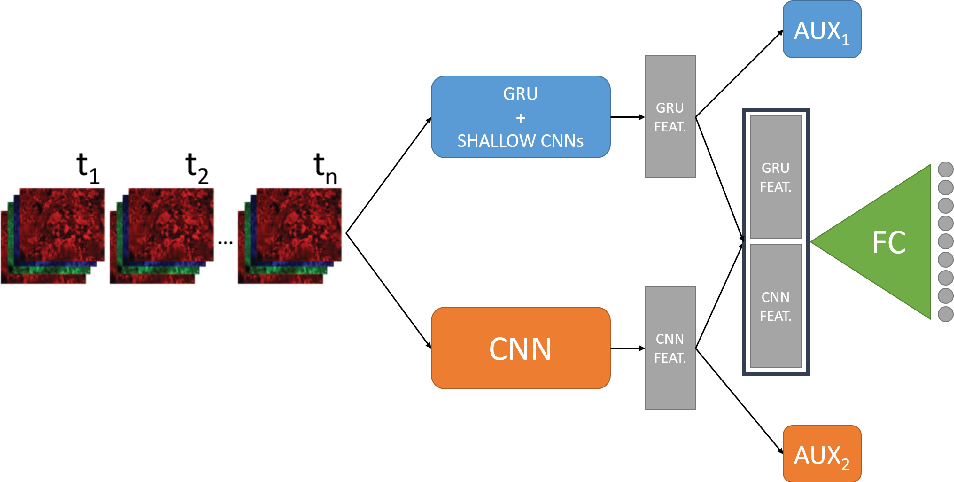 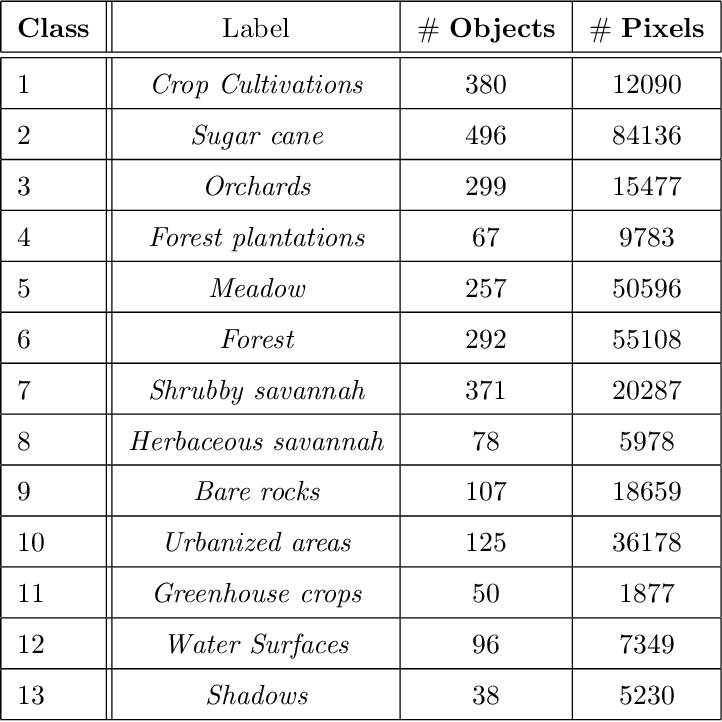 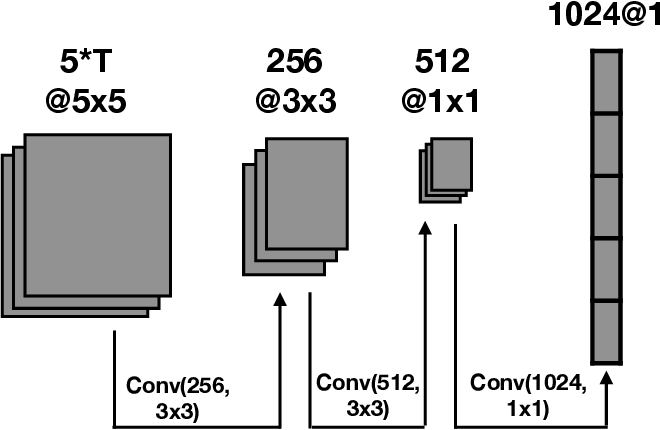 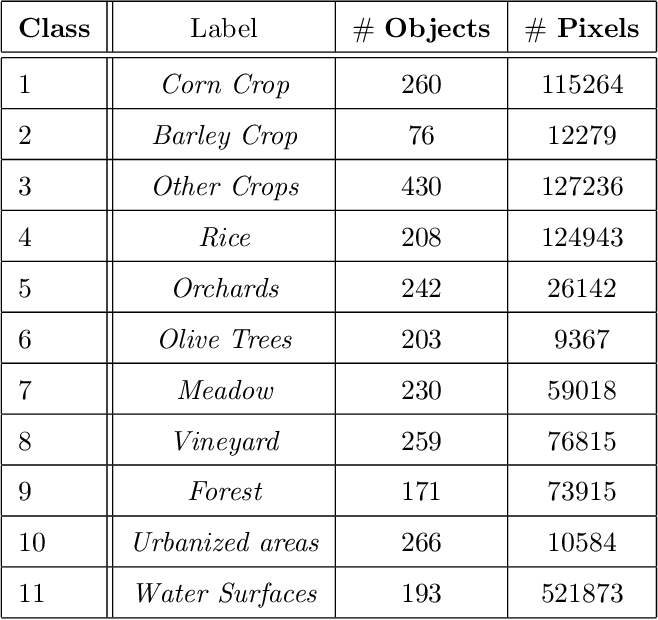 Nowadays, modern Earth Observation systems continuously generate huge amounts of data. A notable example is represented by the Sentinel-2 mission, which provides images at high spatial resolution (up to 10m) with high temporal revisit period (every 5 days), which can be organized in Satellite Image Time Series (SITS). While the use of SITS has been proved to be beneficial in the context of Land Use/Land Cover (LULC) map generation, unfortunately, machine learning approaches commonly leveraged in remote sensing field fail to take advantage of spatio-temporal dependencies present in such data. Recently, new generation deep learning methods allowed to significantly advance research in this field. These approaches have generally focused on a single type of neural network, i.e., Convolutional Neural Networks (CNNs) or Recurrent Neural Networks (RNNs), which model different but complementary information: spatial autocorrelation (CNNs) and temporal dependencies (RNNs). In this work, we propose the first deep learning architecture for the analysis of SITS data, namely \method{} (DUal view Point deep Learning architecture for time series classificatiOn), that combines Convolutional and Recurrent neural networks to exploit their complementarity. Our hypothesis is that, since CNNs and RNNs capture different aspects of the data, a combination of both models would produce a more diverse and complete representation of the information for the underlying land cover classification task. Experiments carried out on two study sites characterized by different land cover characteristics (i.e., the \textit{Gard} site in France and the \textit{Reunion Island} in the Indian Ocean), demonstrate the significance of our proposal.

The development of an information criterion for Change-Point Analysis

Change-point analysis is a flexible and computationally tractable tool for the analysis of times series data from systems that transition between discrete states and whose observables are corrupted by noise. The change-point algorithm is used to identify the time indices (change points) at which the system transitions between these discrete states. We present a unified information-based approach to testing for the existence of change points. This new approach reconciles two previously disparate approaches to Change-Point Analysis (frequentist and information-based) for testing transitions between states. The resulting method is statistically principled, parameter and prior free and widely applicable to a wide range of change-point problems. 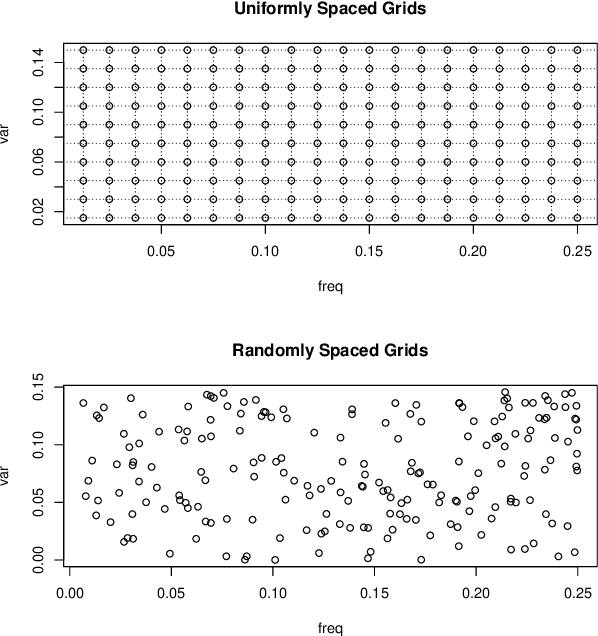 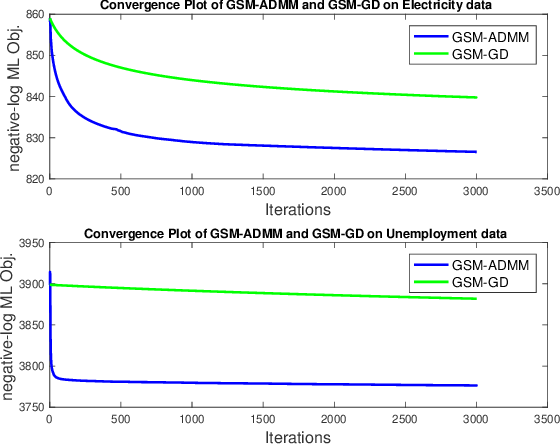 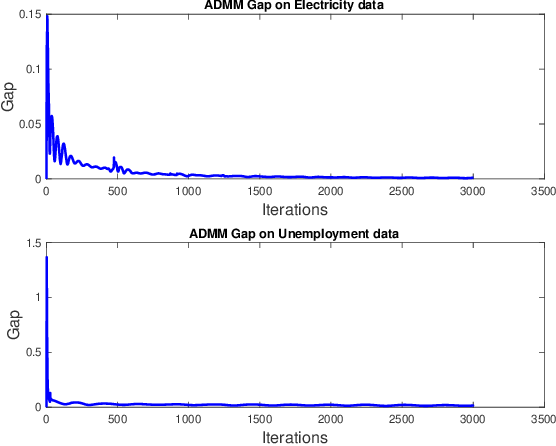 Gaussian processes (GP) for machine learning have been studied systematically over the past two decades and they are by now widely used in a number of diverse applications. However, GP kernel design and the associated hyper-parameter optimization are still hard and to a large extend open problems. In this paper, we consider the task of GP regression for time series modeling and analysis. The underlying stationary kernel can be approximated arbitrarily close by a new proposed grid spectral mixture (GSM) kernel, which turns out to be a linear combination of low-rank sub-kernels. In the case where a large number of the sub-kernels are used, either the Nystr\"{o}m or the random Fourier feature approximations can be adopted to deal efficiently with the computational demands. The unknown GP hyper-parameters consist of the non-negative weights of all sub-kernels as well as the noise variance; their estimation is performed via the maximum-likelihood (ML) estimation framework. Two efficient numerical optimization methods for solving the unknown hyper-parameters are derived, including a sequential majorization-minimization (MM) method and a non-linearly constrained alternating direction of multiplier method (ADMM). The MM matches perfectly with the proven low-rank property of the proposed GSM sub-kernels and turns out to be a part of efficiency, stable, and efficient solver, while the ADMM has the potential to generate better local minimum in terms of the test MSE. Experimental results, based on various classic time series data sets, corroborate that the proposed GSM kernel-based GP regression model outperforms several salient competitors of similar kind in terms of prediction mean-squared-error and numerical stability.