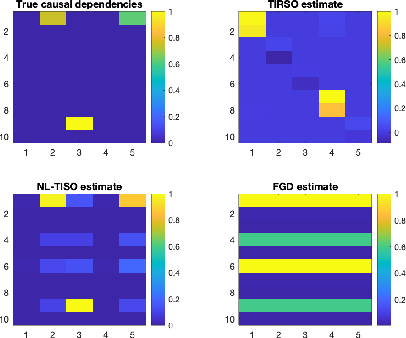 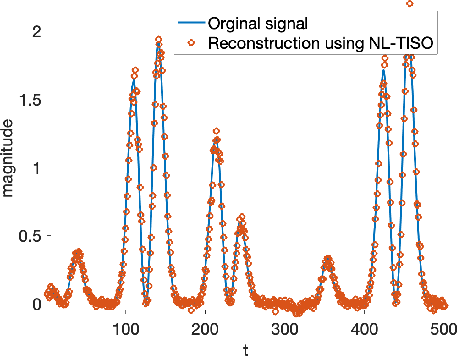 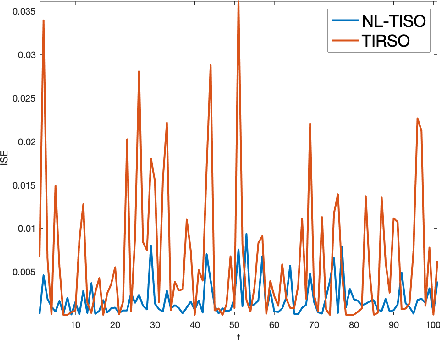 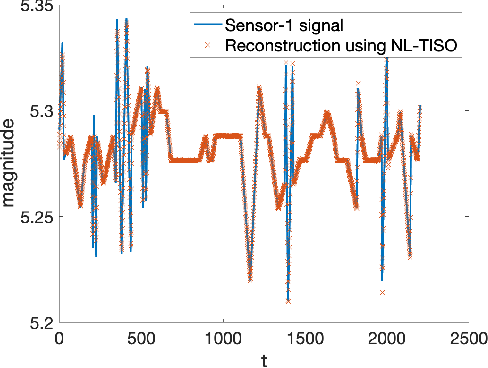 Estimating the unknown causal dependencies among graph-connected time series plays an important role in many applications, such as sensor network analysis, signal processing over cyber-physical systems, and finance engineering. Inference of such causal dependencies, often know as topology identification, is not well studied for non-linear non-stationary systems, and most of the existing methods are batch-based which are not capable of handling streaming sensor signals. In this paper, we propose an online kernel-based algorithm for topology estimation of non-linear vector autoregressive time series by solving a sparse online optimization framework using the composite objective mirror descent method. Experiments conducted on real and synthetic data sets show that the proposed algorithm outperforms the state-of-the-art methods for topology estimation. 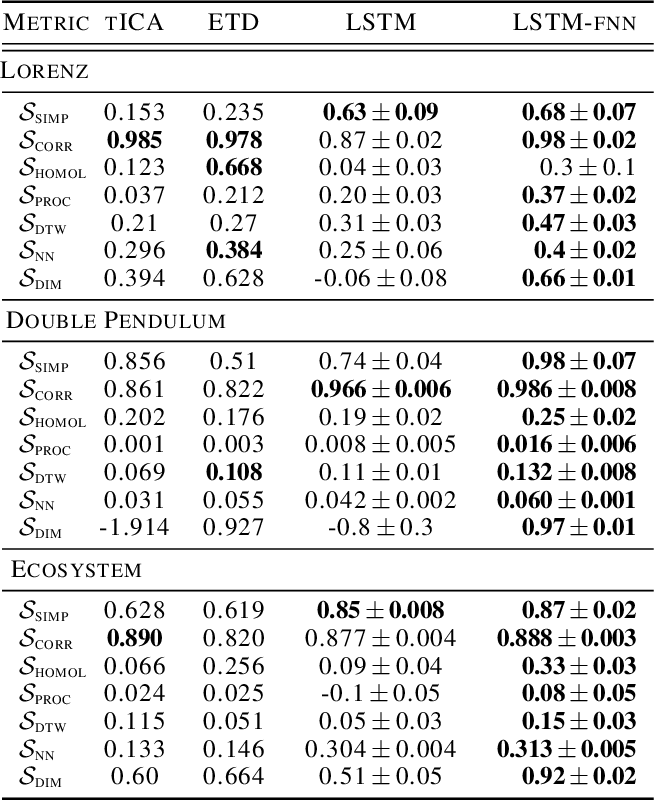 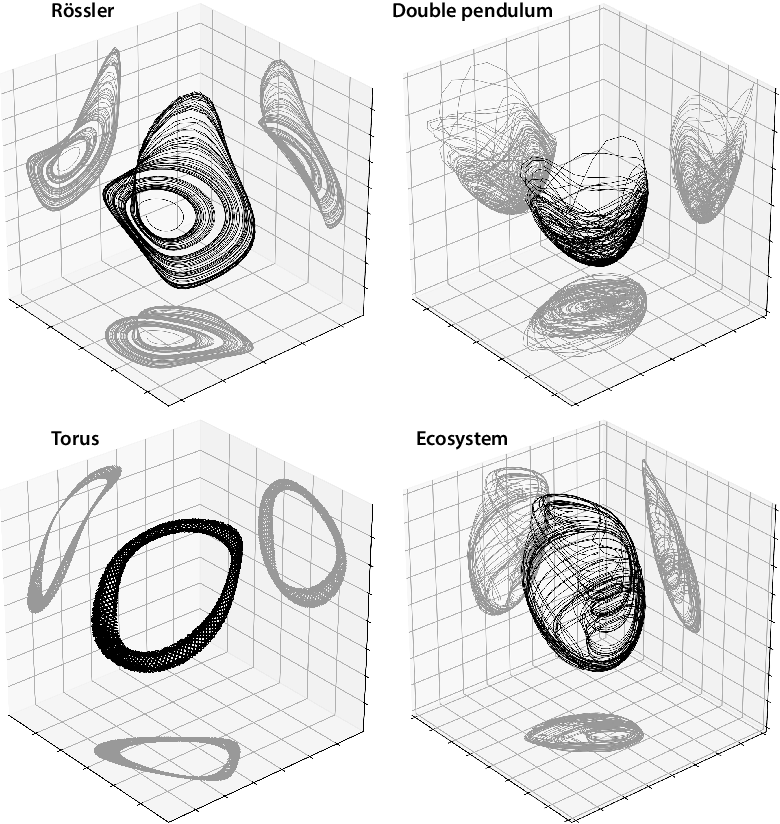 Experimental measurements of physical systems often have a finite number of independent channels, causing essential dynamical variables to remain unobserved. However, many popular methods for unsupervised inference of latent dynamics from experimental data implicitly assume that the measurements have higher intrinsic dimensionality than the underlying system---making coordinate identification a dimensionality reduction problem. Here, we study the opposite limit, in which hidden governing coordinates must be inferred from only a low-dimensional time series of measurements. Inspired by classical techniques for studying the strange attractors of chaotic systems, we introduce a general embedding technique for time series, consisting of an autoencoder trained with a novel latent-space loss function. We first apply our technique to a variety of synthetic and real-world datasets with known strange attractors, and we use established and novel measures of attractor fidelity to show that our method successfully reconstructs attractors better than existing techniques. We then use our technique to discover dynamical attractors in datasets ranging from patient electrocardiograms, to household electricity usage, to eruptions of the Old Faithful geyser---demonstrating diverse applications of our technique for exploratory data analysis. 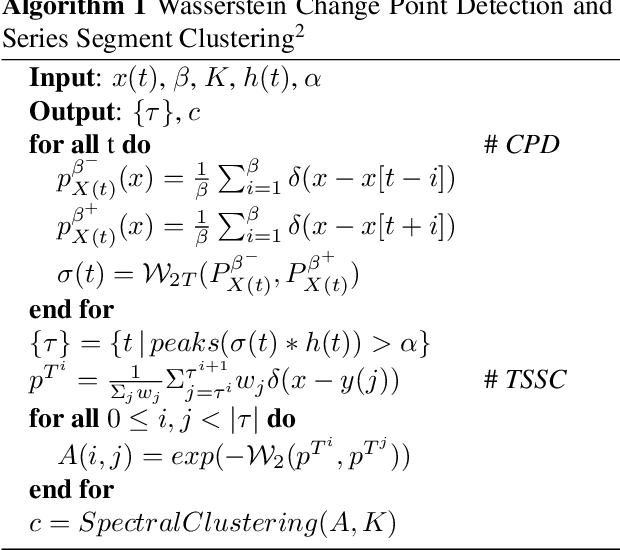 Two common problems in time series analysis are the decomposition of the data stream into disjoint segments, each of which is in some sense 'homogeneous' - a problem that is also referred to as Change Point Detection (CPD) - and the grouping of similar nonadjacent segments, or Time Series Segment Clustering (TSSC). Building upon recent theoretical advances characterizing the limiting distribution free behavior of the Wasserstein two-sample test, we propose a novel algorithm for unsupervised, distribution-free CPD, which is amenable to both offline and online settings. We also introduce a method to mitigate false positives in CPD, and address TSSC by using the Wasserstein distance between the detected segments to build an affinity matrix to which we apply spectral clustering. Results on both synthetic and real data sets show the benefits of the approach. 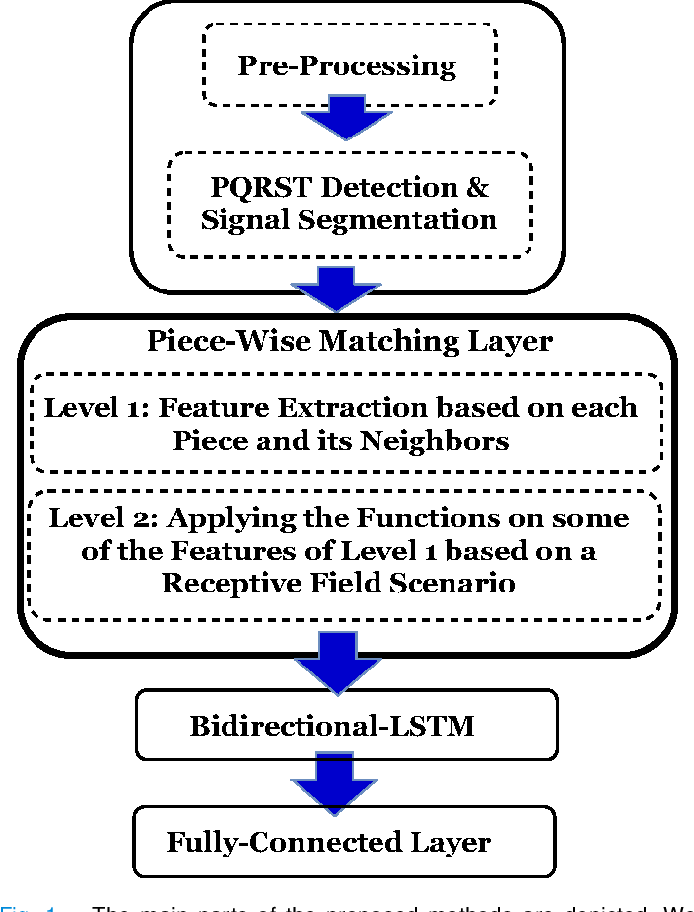 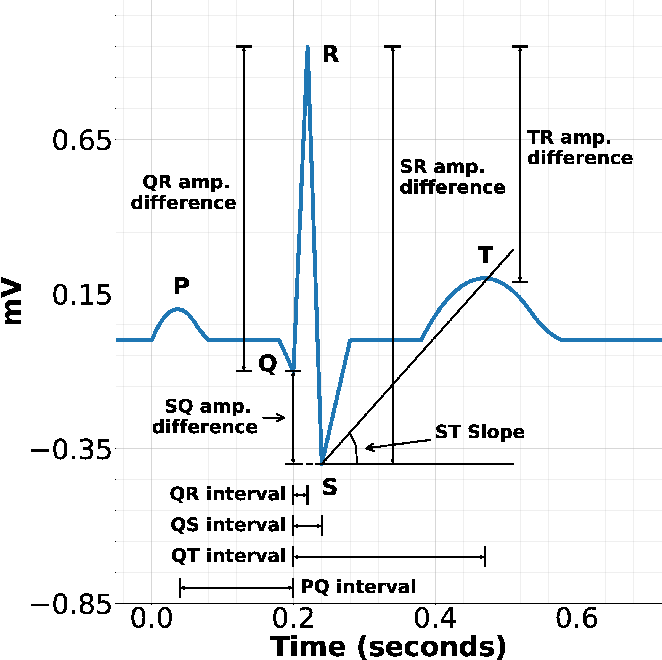 This paper proposes piece-wise matching layer as a novel layer in representation learning methods for electrocardiogram (ECG) classification. Despite the remarkable performance of representation learning methods in the analysis of time series, there are still several challenges associated with these methods ranging from the complex structures of methods, the lack of generality of solutions, the need for expert knowledge, and large-scale training datasets. We introduce the piece-wise matching layer that works based on two levels to address some of the aforementioned challenges. At the first level, a set of morphological, statistical, and frequency features and comparative forms of them are computed based on each periodic part and its neighbors. At the second level, these features are modified by predefined transformation functions based on a receptive field scenario. Several scenarios of offline processing, incremental processing, fixed sliding receptive field, and event-based triggering receptive field can be implemented based on the choice of length and mechanism of indicating the receptive field. We propose dynamic time wrapping as a mechanism that indicates a receptive field based on event triggering tactics. To evaluate the performance of this method in time series analysis, we applied the proposed layer in two publicly available datasets of PhysioNet competitions in 2015 and 2017 where the input data is ECG signal. We compared the performance of our method against a variety of known tuned methods from expert knowledge, machine learning, deep learning methods, and the combination of them. The proposed approach improves the state of the art in two known completions 2015 and 2017 around 4% and 7% correspondingly while it does not rely on in advance knowledge of the classes or the possible places of arrhythmia. 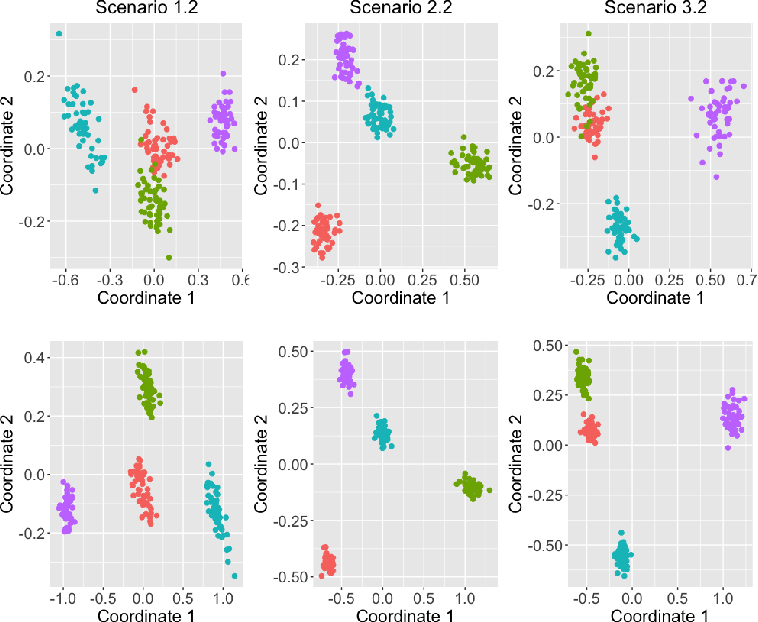 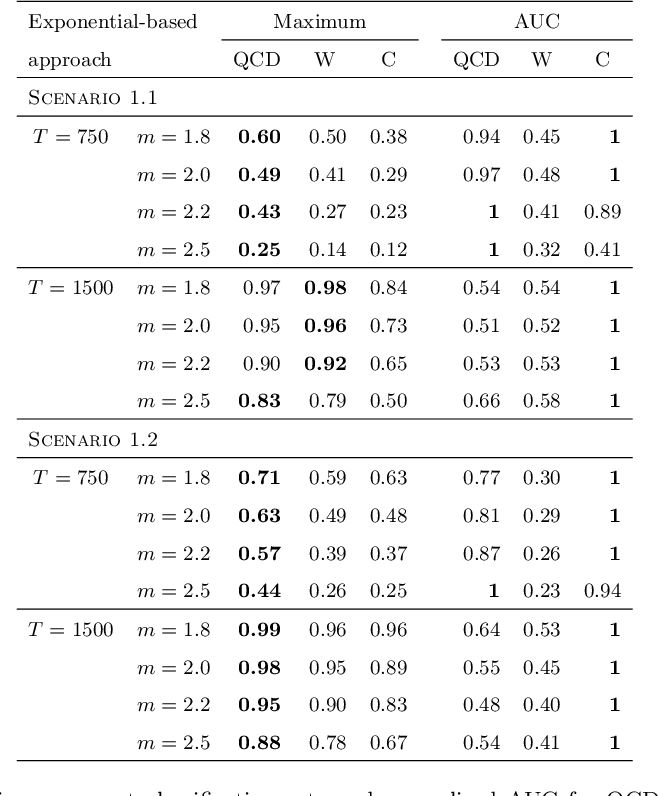 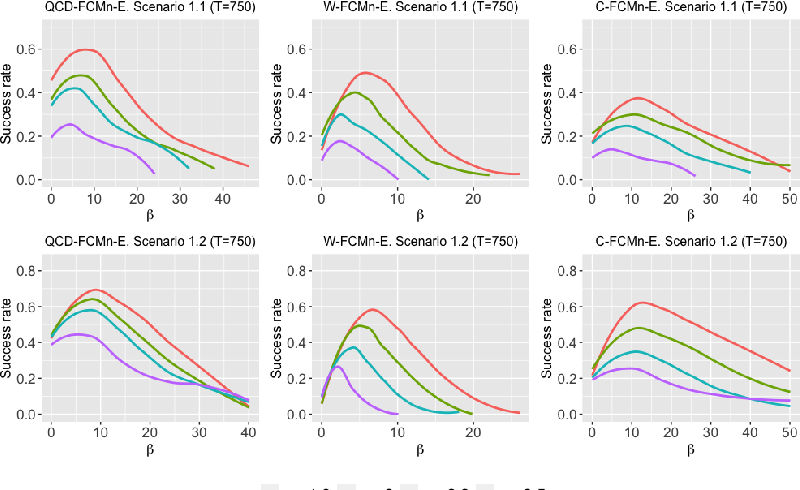 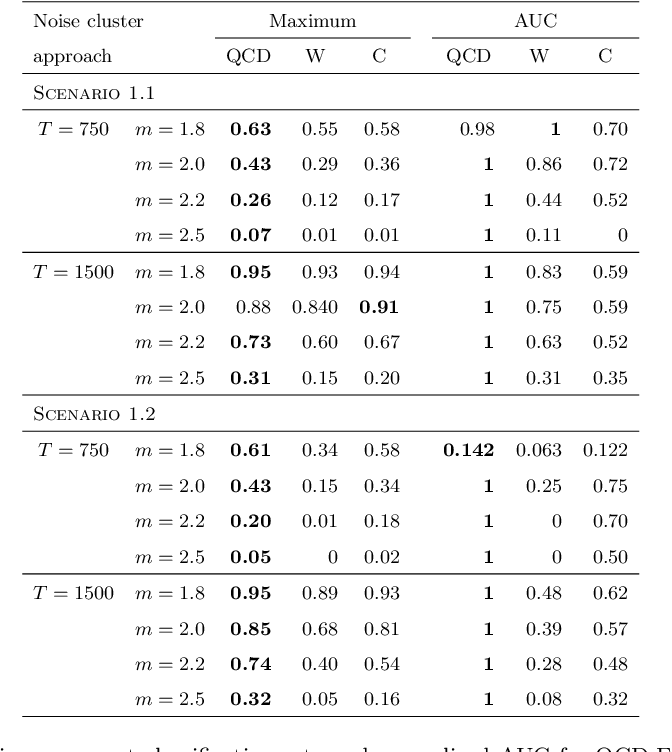 Three robust methods for clustering multivariate time series from the point of view of generating processes are proposed. The procedures are robust versions of a fuzzy C-means model based on: (i) estimates of the quantile cross-spectral density and (ii) the classical principal component analysis. Robustness to the presence of outliers is achieved by using the so-called metric, noise and trimmed approaches. The metric approach incorporates in the objective function a distance measure aimed at neutralizing the effect of the outliers, the noise approach builds an artificial cluster expected to contain the outlying series and the trimmed approach eliminates the most atypical series in the dataset. All the proposed techniques inherit the nice properties of the quantile cross-spectral density, as being able to uncover general types of dependence. Results from a broad simulation study including multivariate linear, nonlinear and GARCH processes indicate that the algorithms are substantially effective in coping with the presence of outlying series (i.e., series exhibiting a dependence structure different from that of the majority), clearly poutperforming alternative procedures. The usefulness of the suggested methods is highlighted by means of two specific applications regarding financial and environmental series. 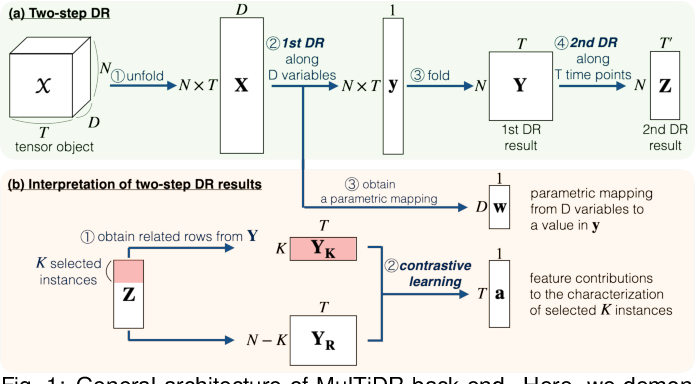 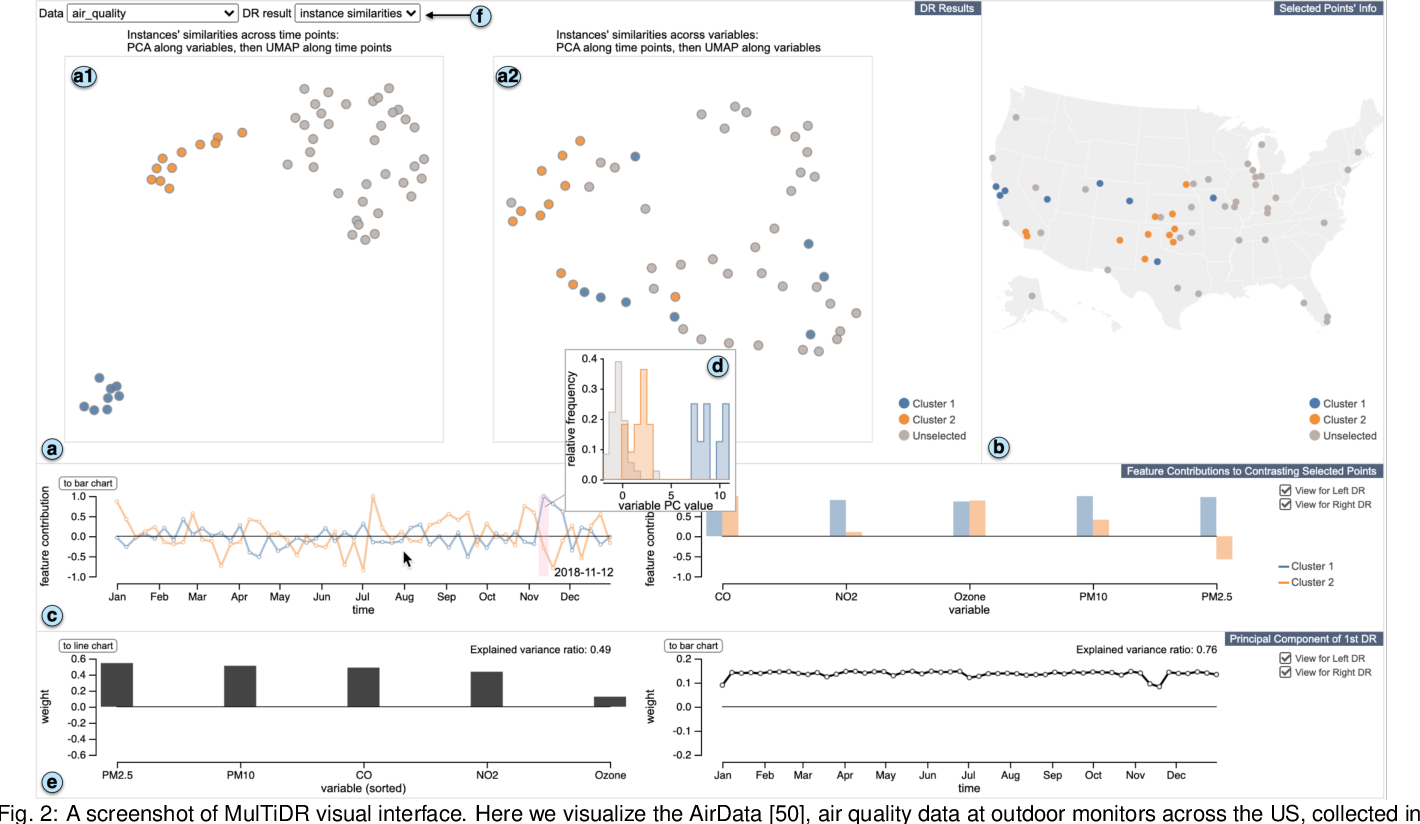 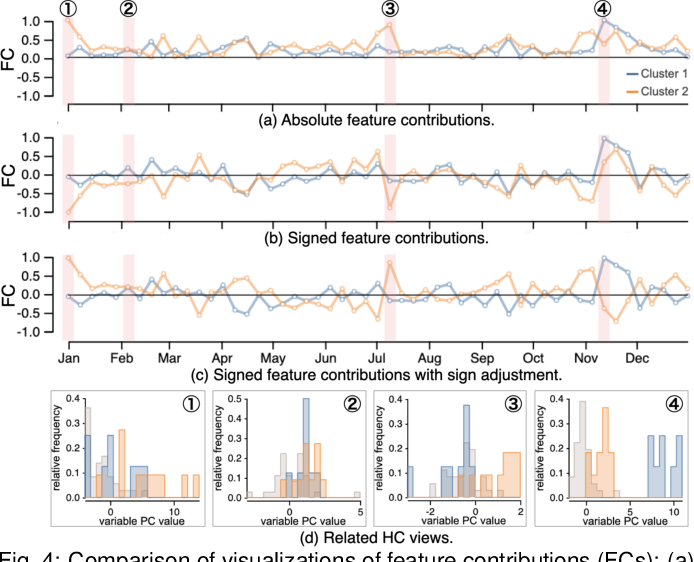 Data-driven problem solving in many real-world applications involves analysis of time-dependent multivariate data, for which dimensionality reduction (DR) methods are often used to uncover the intrinsic structure and features of the data. However, DR is usually applied to a subset of data that is either single-time-point multivariate or univariate time-series, resulting in the need to manually examine and correlate the DR results out of different data subsets. When the number of dimensions is large either in terms of the number of time points or attributes, this manual task becomes too tedious and infeasible. In this paper, we present MulTiDR, a new DR framework that enables processing of time-dependent multivariate data as a whole to provide a comprehensive overview of the data. With the framework, we employ DR in two steps. When treating the instances, time points, and attributes of the data as a 3D array, the first DR step reduces the three axes of the array to two, and the second DR step visualizes the data in a lower-dimensional space. In addition, by coupling with a contrastive learning method and interactive visualizations, our framework enhances analysts' ability to interpret DR results. We demonstrate the effectiveness of our framework with four case studies using real-world datasets. 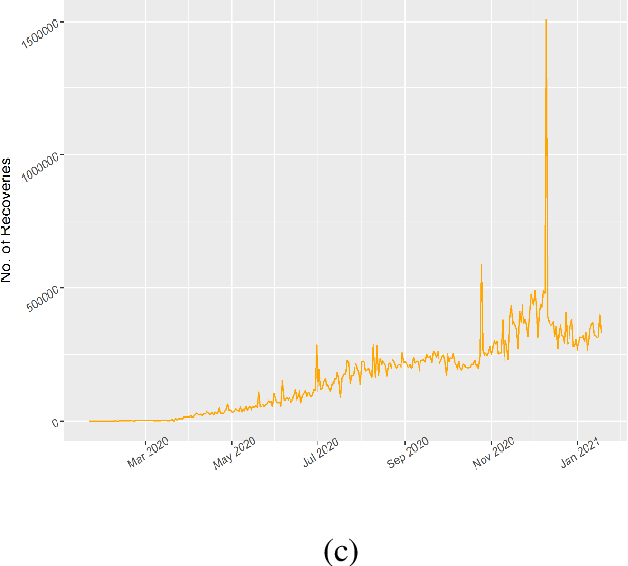 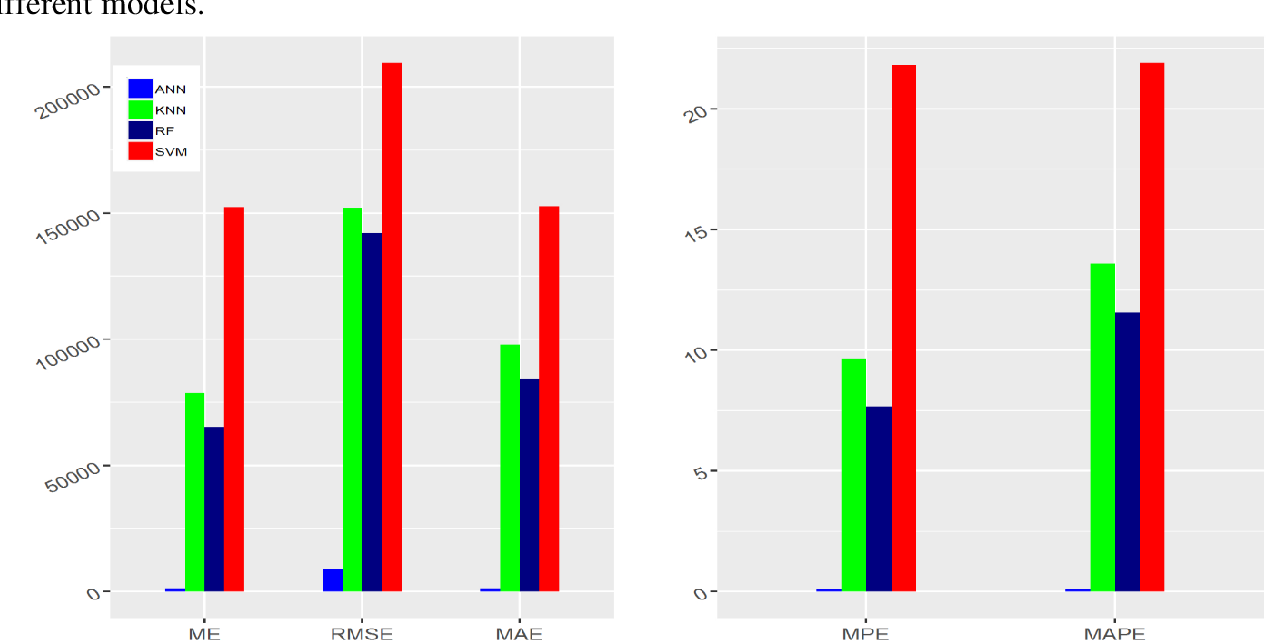 Background. Forecasting the time of forthcoming pandemic reduces the impact of diseases by taking precautionary steps such as public health messaging and raising the consciousness of doctors. With the continuous and rapid increase in the cumulative incidence of COVID-19, statistical and outbreak prediction models including various machine learning (ML) models are being used by the research community to track and predict the trend of the epidemic, and also in developing appropriate strategies to combat and manage its spread. Methods. In this paper, we present a comparative analysis of various ML approaches including Support Vector Machine, Random Forest, K-Nearest Neighbor and Artificial Neural Network in predicting the COVID-19 outbreak in the epidemiological domain. We first apply the autoregressive distributed lag (ARDL) method to identify and model the short and long-run relationships of the time-series COVID-19 datasets. That is, we determine the lags between a response variable and its respective explanatory time series variables as independent variables. Then, the resulting significant variables concerning their lags are used in the regression model selected by the ARDL for predicting and forecasting the trend of the epidemic. Results. Statistical measures i.e., Root Mean Square Error (RMSE), Mean Absolute Error (MAE) and Mean Absolute Percentage Error (MAPE) are used for model accuracy. The values of MAPE for the best selected models for confirmed, recovered and deaths cases are 0.407, 0.094 and 0.124 respectively, which falls under the category of highly accurate forecasts. In addition, we computed fifteen days ahead forecast for the daily deaths, recover, and confirm patients and the cases fluctuated across time in all aspects. Besides, the results reveal the advantages of ML algorithms for supporting decision making of evolving short term policies. 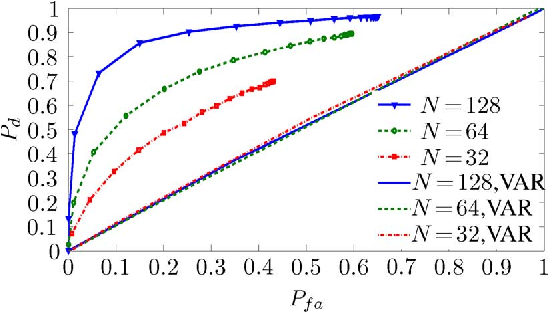 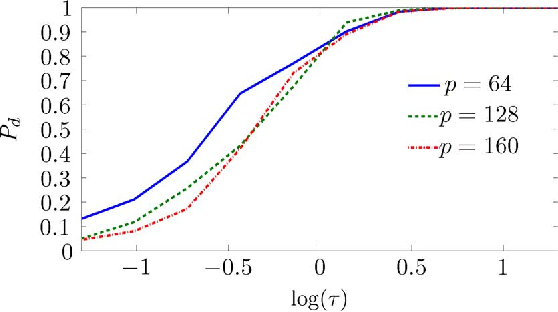 We propose a method for inferring the conditional independence graph (CIG) of a high-dimensional Gaussian vector time series (discrete-time process) from a finite-length observation. By contrast to existing approaches, we do not rely on a parametric process model (such as, e.g., an autoregressive model) for the observed random process. Instead, we only require certain smoothness properties (in the Fourier domain) of the process. The proposed inference scheme works even for sample sizes much smaller than the number of scalar process components if the true underlying CIG is sufficiently sparse. A theoretical performance analysis provides conditions which guarantee that the probability of the proposed inference method to deliver a wrong CIG is below a prescribed value. These conditions imply lower bounds on the sample size such that the new method is consistent asymptotically. Some numerical experiments validate our theoretical performance analysis and demonstrate superior performance of our scheme compared to an existing (parametric) approach in case of model mismatch.


* to be submitted to IEEE Trans. Sig. Proc

Detecting relevant changes in dynamic time series data in a timely manner is crucially important for many data analysis tasks in real-world settings. Change point detection methods have the ability to discover changes in an unsupervised fashion, which represents a desirable property in the analysis of unbounded and unlabeled data streams. However, one limitation of most of the existing approaches is represented by their limited ability to handle multivariate and high-dimensional data, which is frequently observed in modern applications such as traffic flow prediction, human activity recognition, and smart grids monitoring. In this paper, we attempt to fill this gap by proposing WATCH, a novel Wasserstein distance-based change point detection approach that models an initial distribution and monitors its behavior while processing new data points, providing accurate and robust detection of change points in dynamic high-dimensional data. An extensive experimental evaluation involving a large number of benchmark datasets shows that WATCH is capable of accurately identifying change points and outperforming state-of-the-art methods.