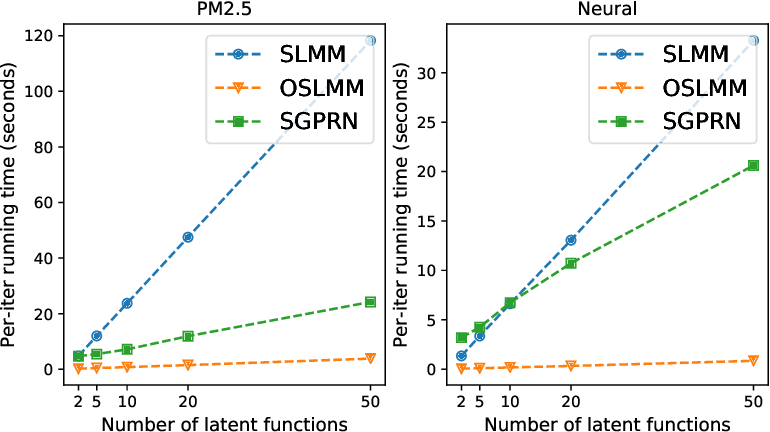 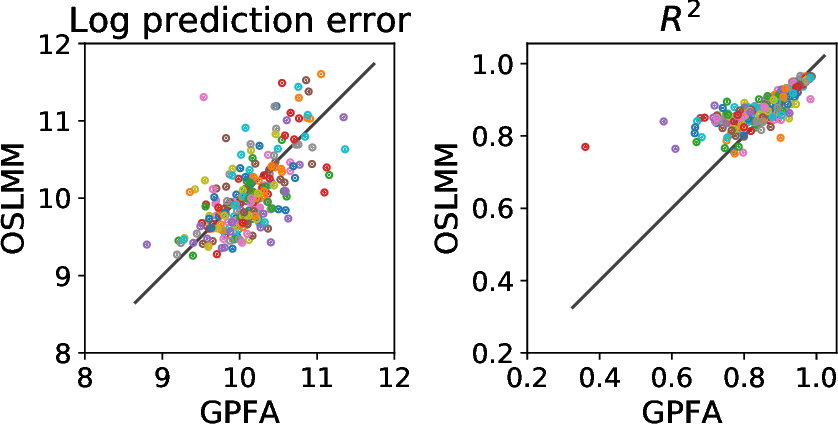 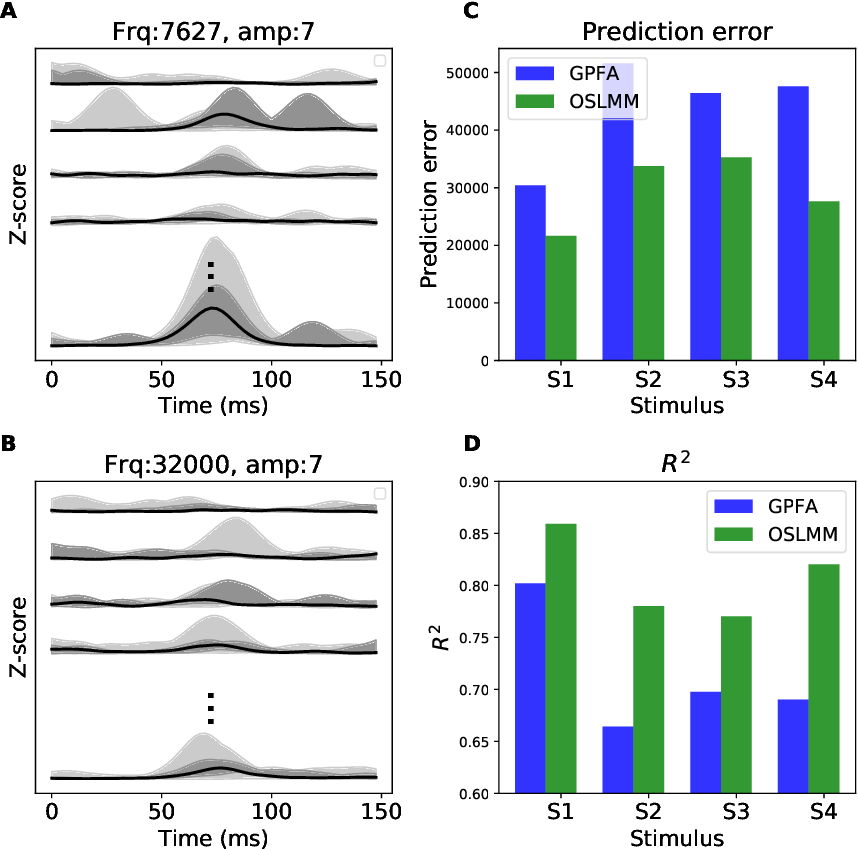 Many modern time-series datasets contain large numbers of output response variables sampled for prolonged periods of time. For example, in neuroscience, the activities of 100s-1000's of neurons are recorded during behaviors and in response to sensory stimuli. Multi-output Gaussian process models leverage the nonparametric nature of Gaussian processes to capture structure across multiple outputs. However, this class of models typically assumes that the correlations between the output response variables are invariant in the input space. Stochastic linear mixing models (SLMM) assume the mixture coefficients depend on input, making them more flexible and effective to capture complex output dependence. However, currently, the inference for SLMMs is intractable for large datasets, making them inapplicable to several modern time-series problems. In this paper, we propose a new regression framework, the orthogonal stochastic linear mixing model (OSLMM) that introduces an orthogonal constraint amongst the mixing coefficients. This constraint reduces the computational burden of inference while retaining the capability to handle complex output dependence. We provide Markov chain Monte Carlo inference procedures for both SLMM and OSLMM and demonstrate superior model scalability and reduced prediction error of OSLMM compared with state-of-the-art methods on several real-world applications. In neurophysiology recordings, we use the inferred latent functions for compact visualization of population responses to auditory stimuli, and demonstrate superior results compared to a competing method (GPFA). Together, these results demonstrate that OSLMM will be useful for the analysis of diverse, large-scale time-series datasets. 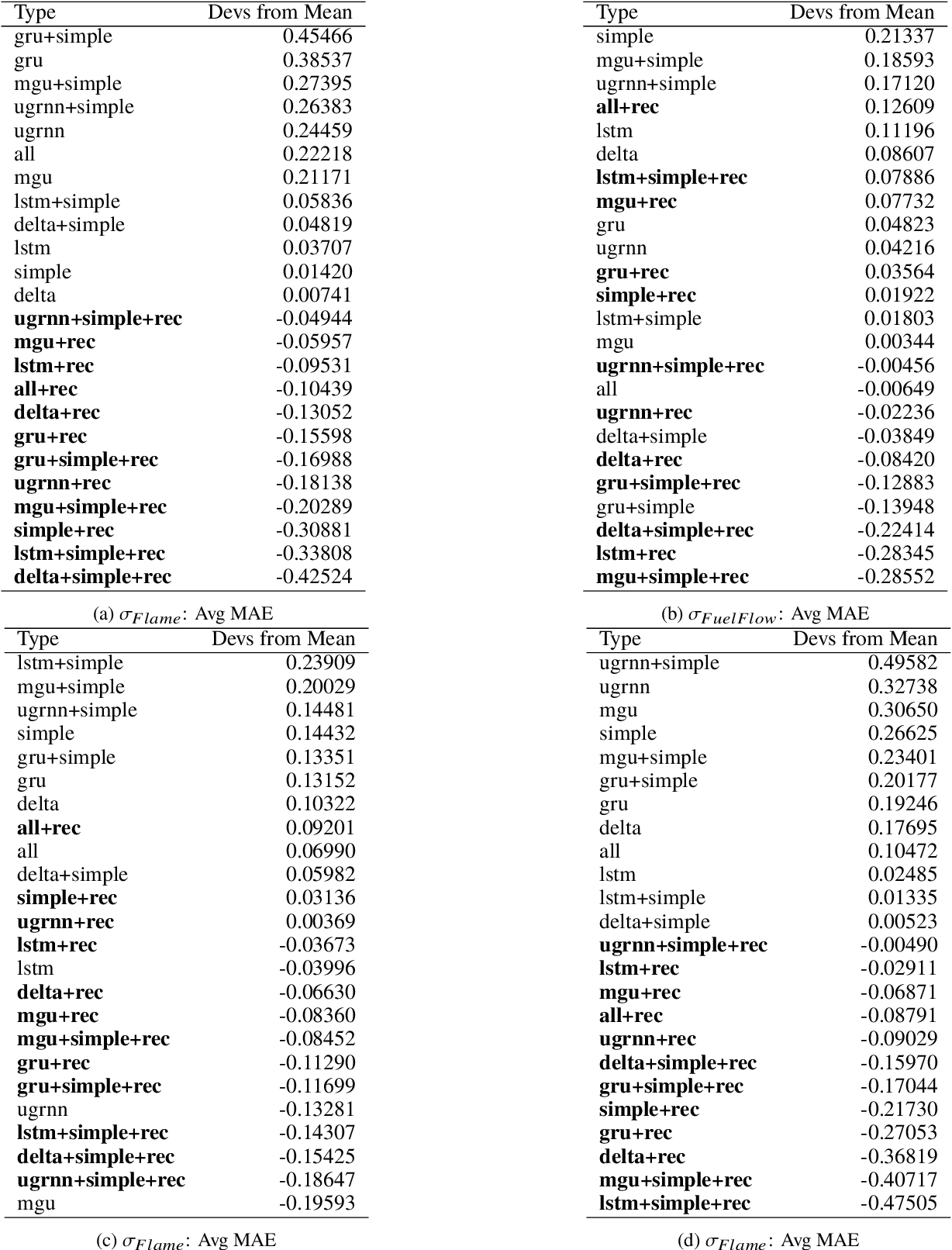 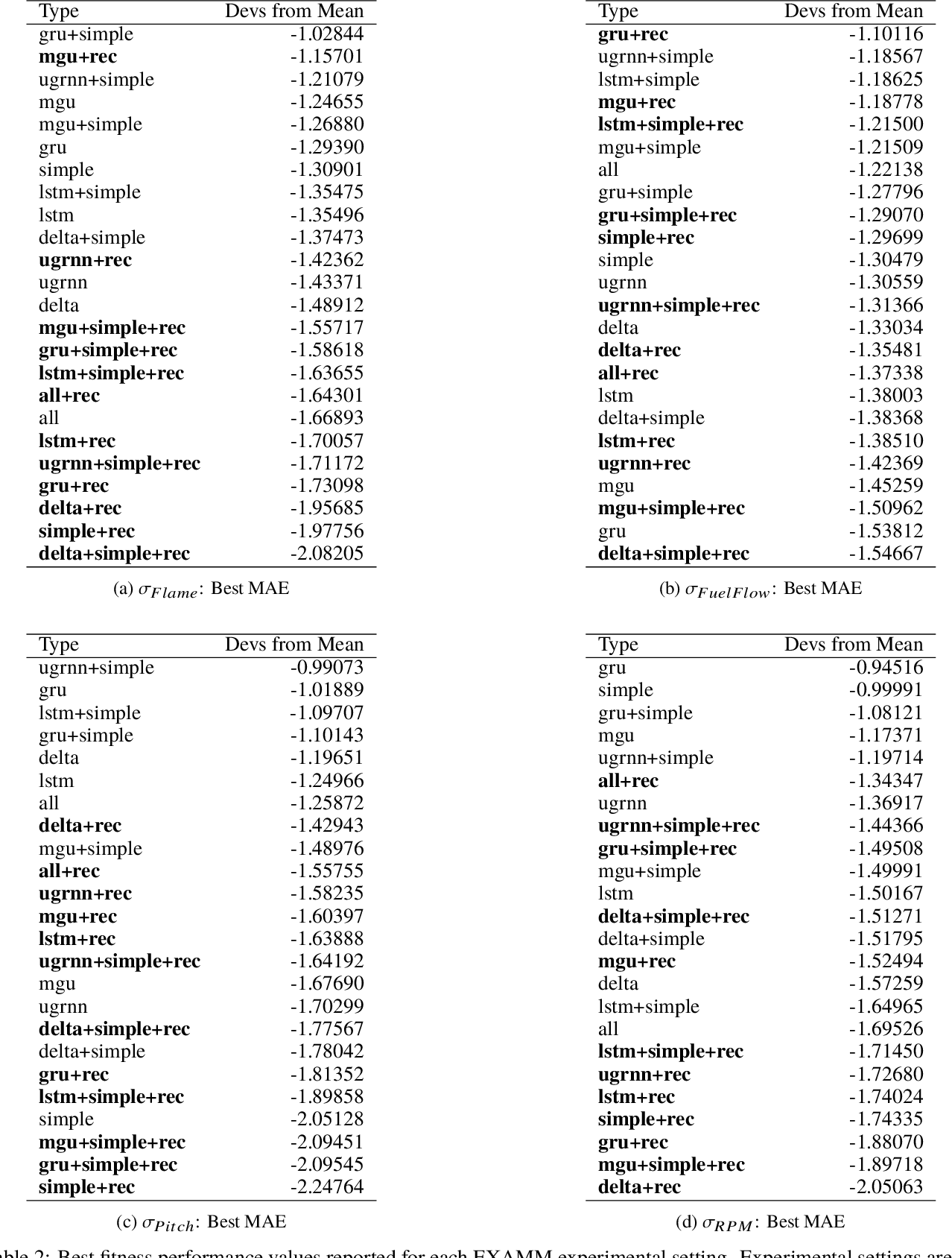 Neuro-evolution and neural architecture search algorithms have gained increasing interest due to the challenges involved in designing optimal artificial neural networks (ANNs). While these algorithms have been shown to possess the potential to outperform the best human crafted architectures, a less common use of them is as a tool for analysis of ANN structural components and connectivity structures. In this work, we focus on this particular use-case to develop a rigorous examination and comparison framework for analyzing recurrent neural networks (RNNs) applied to time series prediction using the novel neuro-evolutionary process known as Evolutionary eXploration of Augmenting Memory Models (EXAMM). Specifically, we use our EXAMM-based analysis to investigate the capabilities of recurrent memory cells and the generalization ability afforded by various complex recurrent connectivity patterns that span one or more steps in time, i.e., deep recurrent connections. EXAMM, in this study, was used to train over 10.56 million RNNs in 5,280 repeated experiments with varying components. While many modern, often hand-crafted RNNs rely on complex memory cells (which have internal recurrent connections that only span a single time step) operating under the assumption that these sufficiently latch information and handle long term dependencies, our results show that networks evolved with deep recurrent connections perform significantly better than those without. More importantly, in some cases, the best performing RNNs consisted of only simple neurons and deep time skip connections, without any memory cells. These results strongly suggest that utilizing deep time skip connections in RNNs for time series data prediction not only deserves further, dedicated study, but also demonstrate the potential of neuro-evolution as a means to better study, understand, and train effective RNNs. 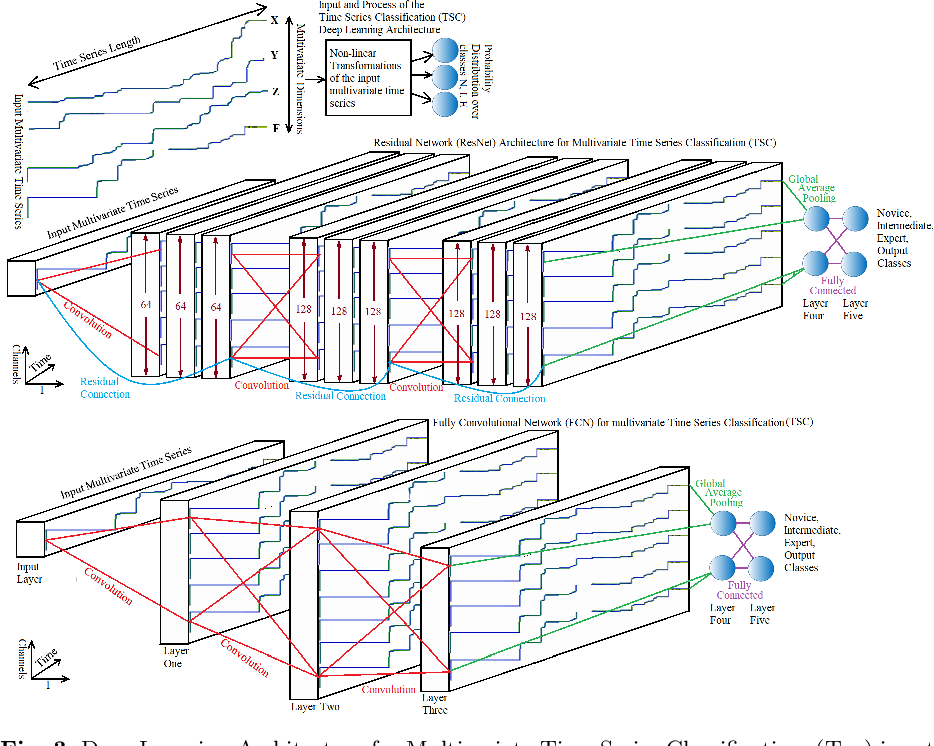 
* Engineering Applications of Artificial Intelligence (2020) 103760
* Copyright 2020. This manuscript version is made available under CC-BY-NC-ND 4.0 license http://creativecommons.org/licenses/by-nc-nd/4.0/

Performance forecasting is an age-old problem in economics and finance. Recently, developments in machine learning and neural networks have given rise to non-linear time series models that provide modern and promising alternatives to traditional methods of analysis. In this paper, we present an ensemble of independent and parallel long short-term memory (LSTM) neural networks for the prediction of stock price movement. LSTMs have been shown to be especially suited for time series data due to their ability to incorporate past information, while neural network ensembles have been found to reduce variability in results and improve generalization. A binary classification problem based on the median of returns is used, and the ensemble's forecast depends on a threshold value, which is the minimum number of LSTMs required to agree upon the result. The model is applied to the constituents of the smaller, less efficient Stockholm OMX30 instead of other major market indices such as the DJIA and S&P500 commonly found in literature. With a straightforward trading strategy, comparisons with a randomly chosen portfolio and a portfolio containing all the stocks in the index show that the portfolio resulting from the LSTM ensemble provides better average daily returns and higher cumulative returns over time. Moreover, the LSTM portfolio also exhibits less volatility, leading to higher risk-return ratios. 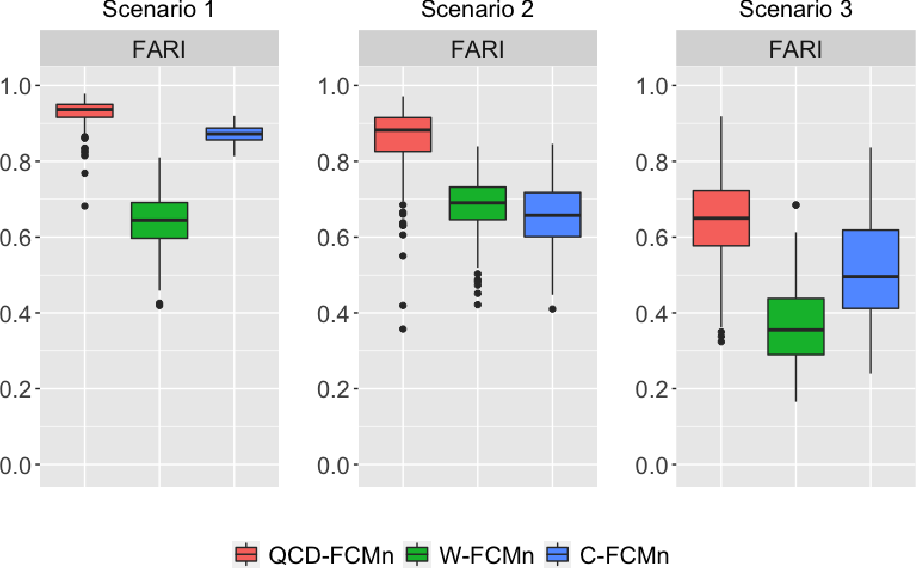 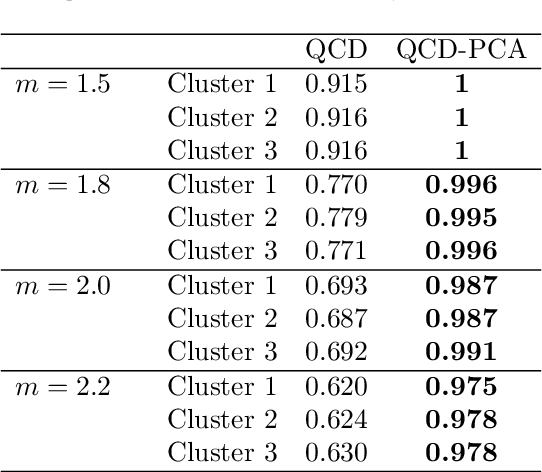 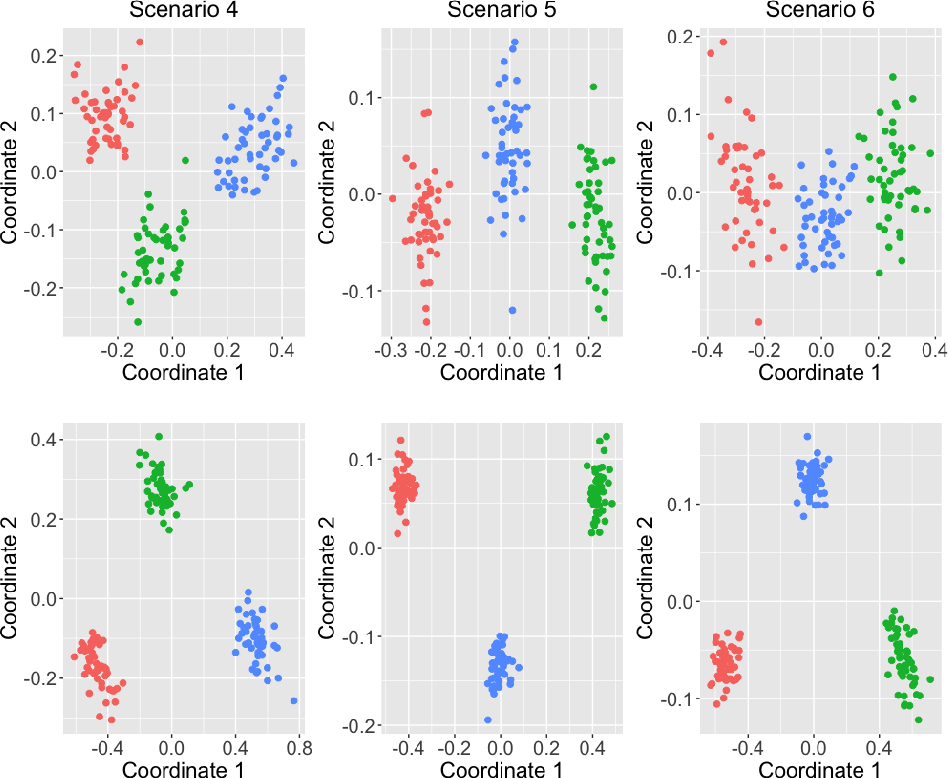 A novel procedure to perform fuzzy clustering of multivariate time series generated from different dependence models is proposed. Different amounts of dissimilarity between the generating models or changes on the dynamic behaviours over time are some arguments justifying a fuzzy approach, where each series is associated to all the clusters with specific membership levels. Our procedure considers quantile-based cross-spectral features and consists of three stages: (i) each element is characterized by a vector of proper estimates of the quantile cross-spectral densities, (ii) principal component analysis is carried out to capture the main differences reducing the effects of the noise, and (iii) the squared Euclidean distance between the first retained principal components is used to perform clustering through the standard fuzzy C-means and fuzzy C-medoids algorithms. The performance of the proposed approach is evaluated in a broad simulation study where several types of generating processes are considered, including linear, nonlinear and dynamic conditional correlation models. Assessment is done in two different ways: by directly measuring the quality of the resulting fuzzy partition and by taking into account the ability of the technique to determine the overlapping nature of series located equidistant from well-defined clusters. The procedure is compared with the few alternatives suggested in the literature, substantially outperforming all of them whatever the underlying process and the evaluation scheme. Two specific applications involving air quality and financial databases illustrate the usefulness of our approach.

Learning compressed representations of multivariate time series (MTS) facilitate the analysis and process of the data in presence of noise, redundant information, and large amount of variables and time steps. However, classic dimensionality reduction approaches are not designed to process sequential data, especially in the presence of missing values. In this work, we propose a novel autoencoder architecture based on recurrent neural networks to generate compressed representations of MTS, which may contain missing values and have variable lengths. Our autoencoder learns fixed-length vectorial representations, whose pairwise similarities are aligned with a kernel function that operates in input space and handles missing values. This, allows to preserve relationships in the low-dimensional vector space even in presence of missing values. To highlight the main features of the proposed autoencoder, we first investigate its performance in controlled experiments. Successively, we show how the learned representations can be exploited both in several benchmark and real-world classification tasks on medical data. Finally, based on the proposed architecture, we conceive a framework for one-class classification and imputation of missing data in time series extracted from ECG signals. 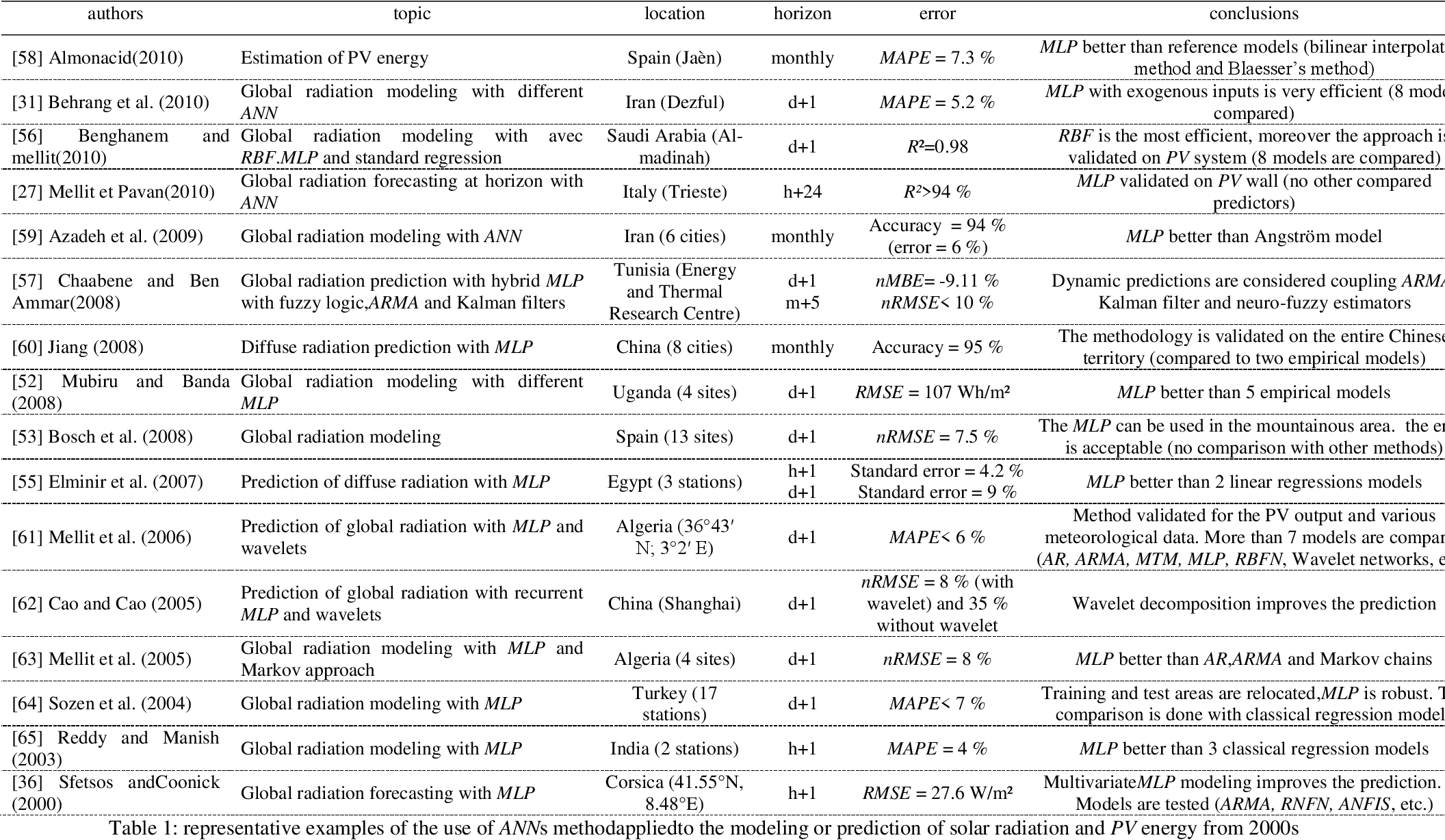 Considering the grid manager's point of view, needs in terms of prediction of intermittent energy like the photovoltaic resource can be distinguished according to the considered horizon: following days (d+1, d+2 and d+3), next day by hourly step (h+24), next hour (h+1) and next few minutes (m+5 e.g.). Through this work, we have identified methodologies using time series models for the prediction horizon of global radiation and photovoltaic power. What we present here is a comparison of different predictors developed and tested to propose a hierarchy. For horizons d+1 and h+1, without advanced ad hoc time series pre-processing (stationarity) we find it is not easy to differentiate between autoregressive moving average (ARMA) and multilayer perceptron (MLP). However we observed that using exogenous variables improves significantly the results for MLP . We have shown that the MLP were more adapted for horizons h+24 and m+5. In summary, our results are complementary and improve the existing prediction techniques with innovative tools: stationarity, numerical weather prediction combination, MLP and ARMA hybridization, multivariate analysis, time index, etc. 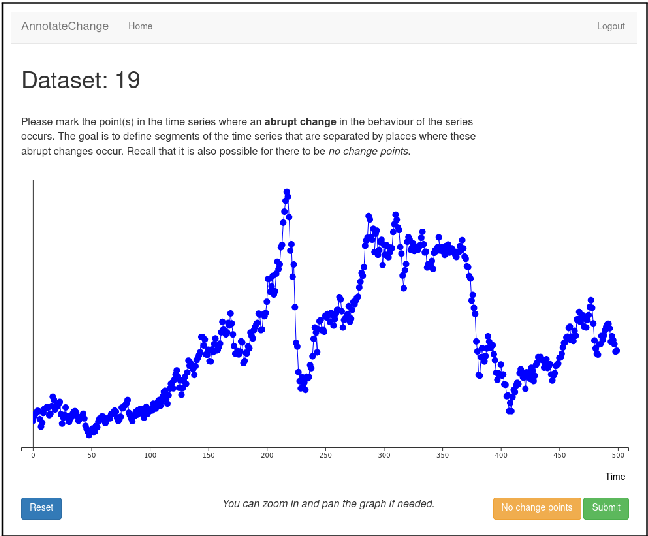 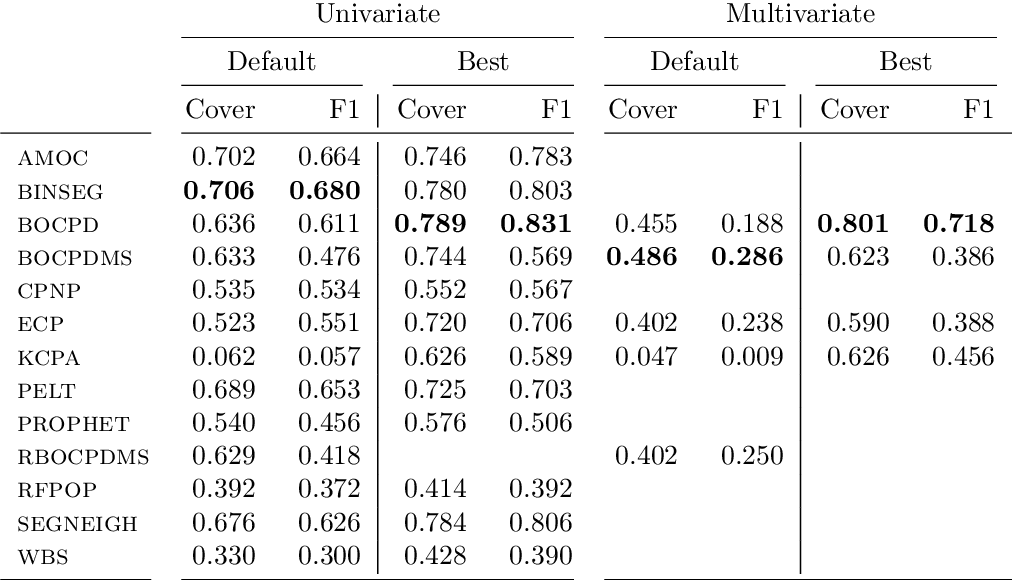 
* For code and data, see https://github.com/alan-turing-institute/TCPDBench 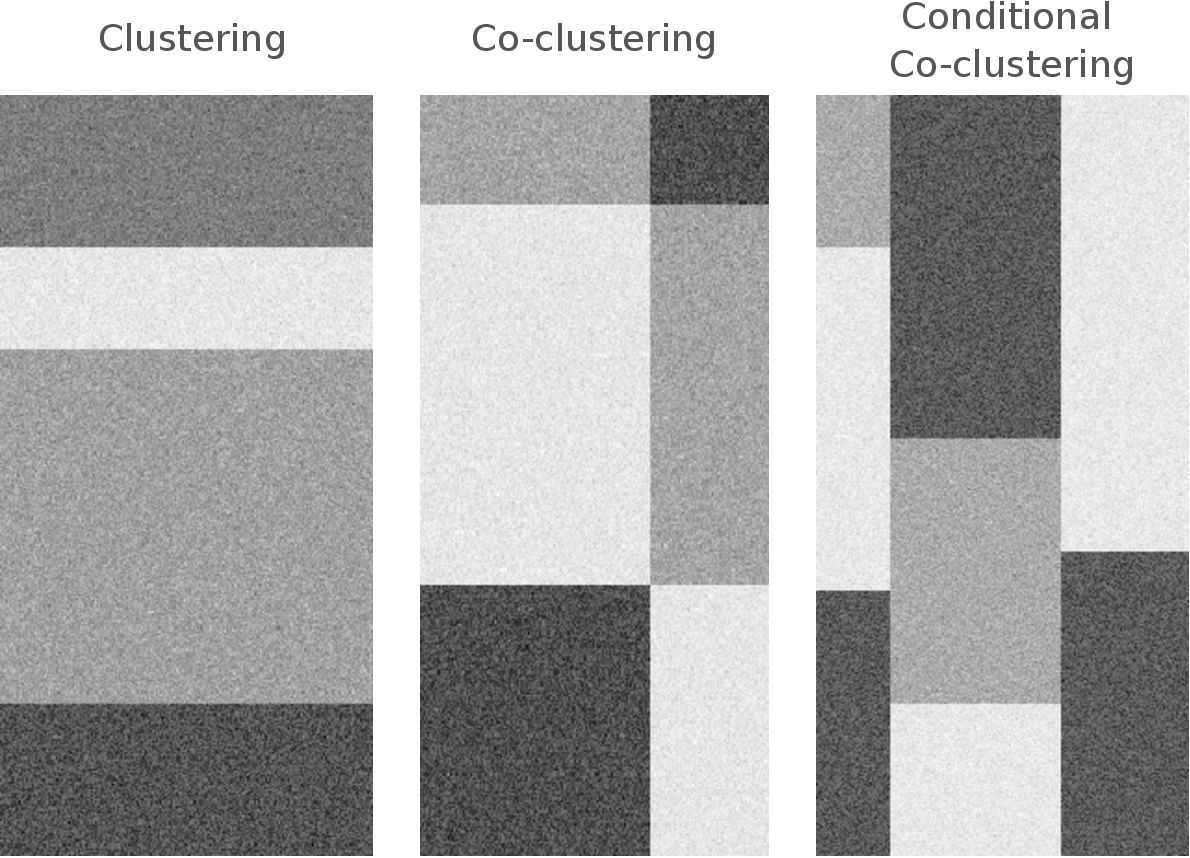 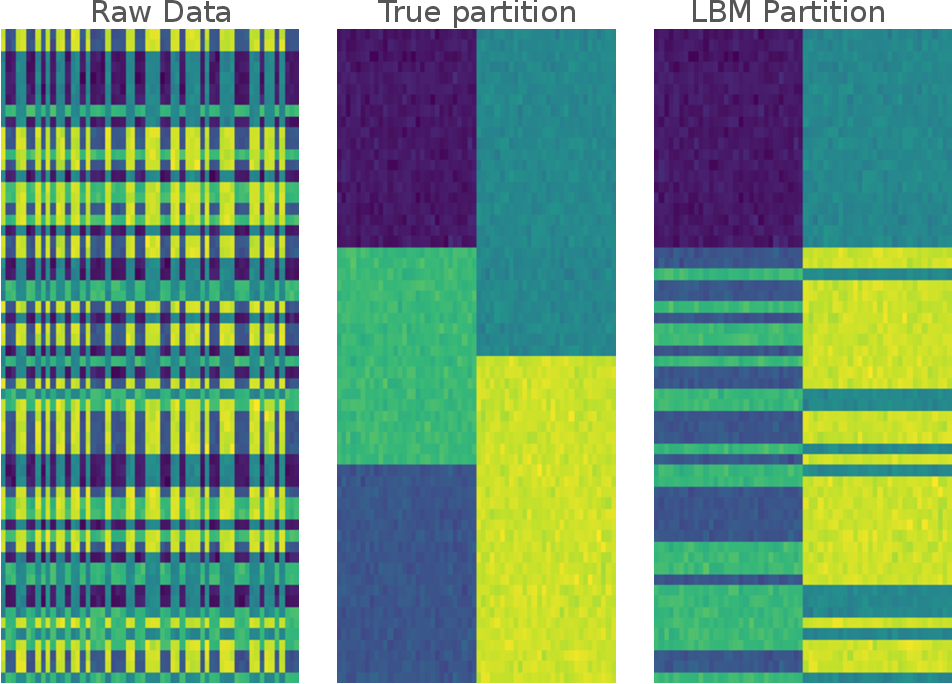 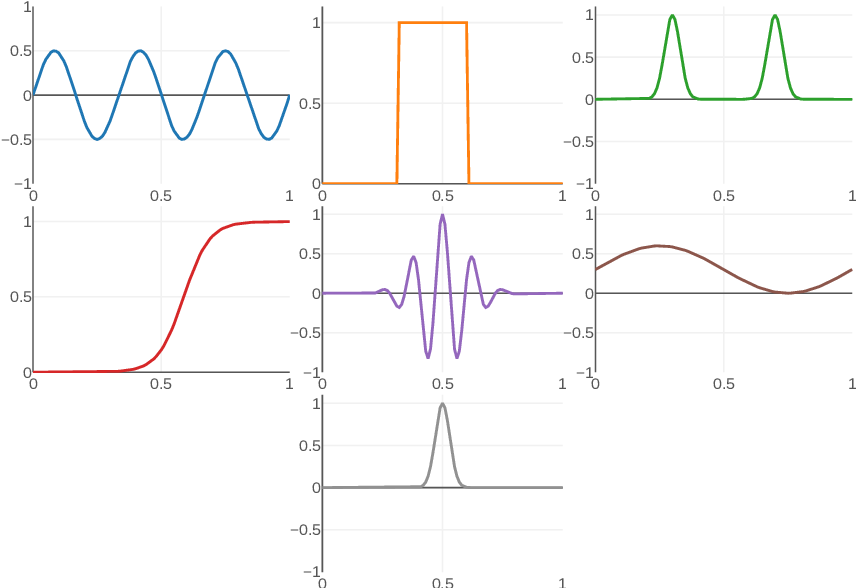 Autonomous driving systems validation remains one of the biggest challenges car manufacturers must tackle in order to provide safe driverless cars. The high complexity stems from several factors: the multiplicity of vehicles, embedded systems, use cases, and the very high required level of reliability for the driving system to be at least as safe as a human driver. In order to circumvent these issues, large scale simulations reproducing this huge variety of physical conditions are intensively used to test driverless cars. Therefore, the validation step produces a massive amount of data, including many time-indexed ones, to be processed. In this context, building a structure in the feature space is mandatory to interpret the various scenarios. In this work, we propose a new co-clustering approach adapted to high-dimensional time series analysis, that extends the standard model-based co-clustering. The FunCLBM model extends the recently proposed Functional Latent Block Model and allows to create a dependency structure between row and column clusters. This structured partition acts as a feature selection method, that provides several clustering views of a dataset, while discriminating irrelevant features. In this workflow, times series are projected onto a common interpolated low-dimensional frequency space, which allows to optimize the projection basis. In addition, FunCLBM refines the definition of each latent block by performing block-wise dimension reduction and feature selection. We propose a SEM-Gibbs algorithm to infer this model, as well as a dedicated criterion to select the optimal nested partition. Experiments on both simulated and real-case Renault datasets shows the effectiveness of the proposed tools and the adequacy to our use case.