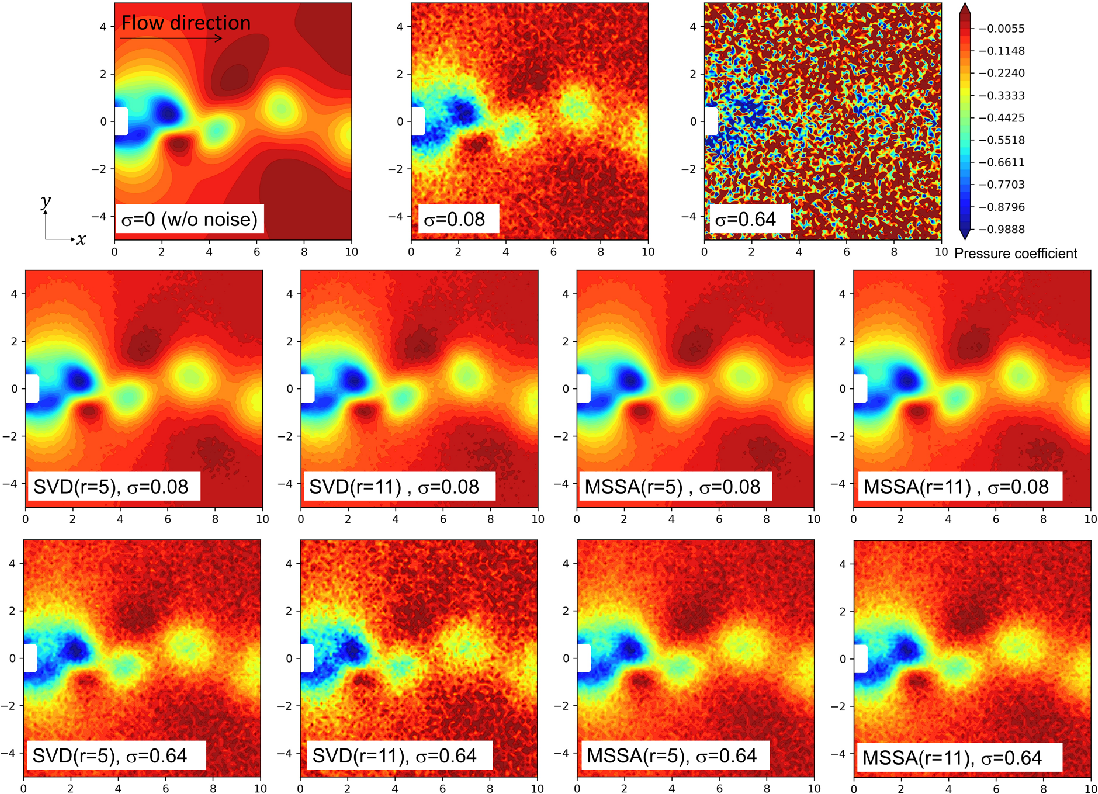 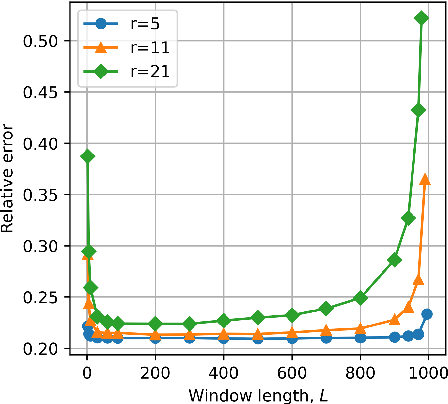 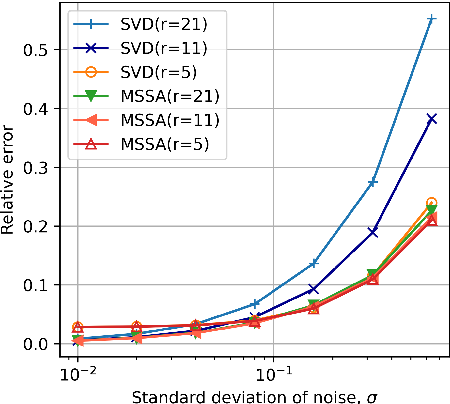 Time-series data, such as unsteady pressure-sensitive paint (PSP) measurement data, may contain a significant amount of random noise. Thus, in this study, we investigated a noise-reduction method that combines multivariate singular spectrum analysis (MSSA) with low-dimensional data representation. MSSA is a state-space reconstruction technique that utilizes time-delay embedding, and the low-dimensional representation is achieved by projecting data onto the singular value decomposition (SVD) basis. The noise-reduction performance of the proposed method for unsteady PSP data, i.e., the projected MSSA, is compared with that of the truncated SVD method, one of the most employed noise-reduction methods. The result shows that the projected MSSA exhibits better performance in reducing random noise than the truncated SVD method. Additionally, in contrast to that of the truncated SVD method, the performance of the projected MSSA is less sensitive to the truncation rank. Furthermore, the projected MSSA achieves denoising effectively by extracting smooth trajectories in a state space from noisy input data. Expectedly, the projected MSSA will be effective for reducing random noise in not only PSP measurement data, but also various high-dimensional time-series data. 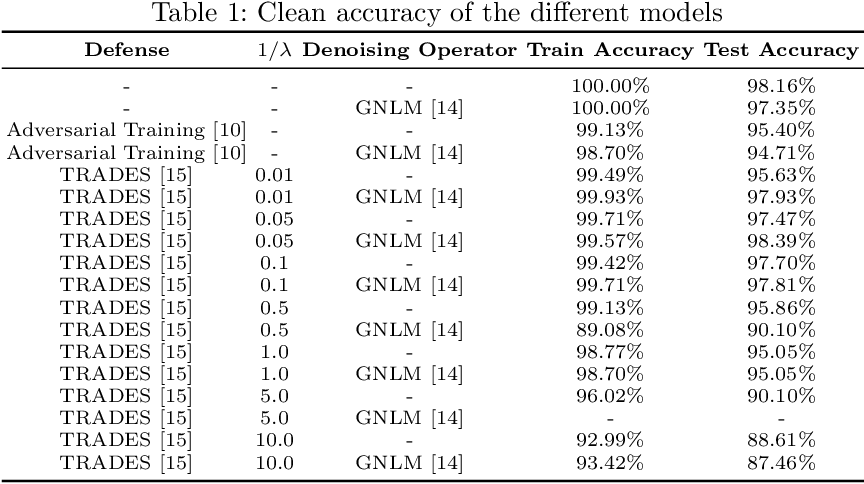 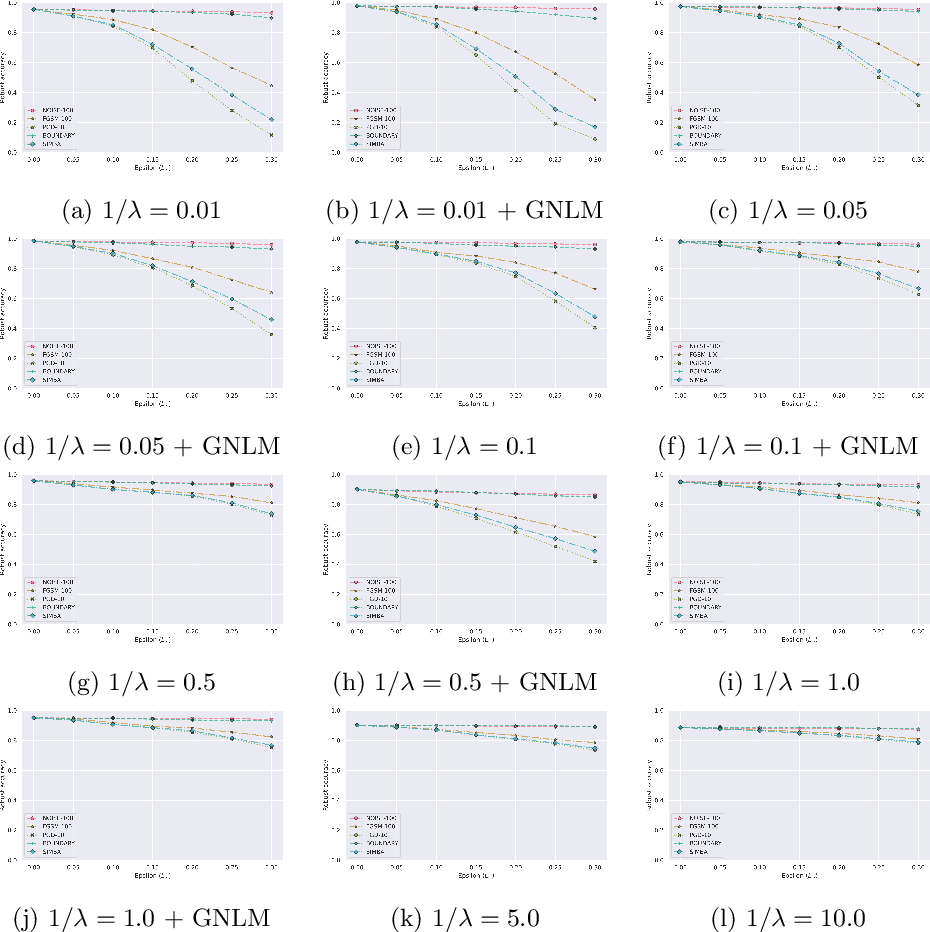 The adversarial vulnerability of deep networks has spurred the interest of researchers worldwide. Unsurprisingly, like images, adversarial examples also translate to time-series data as they are an inherent weakness of the model itself rather than the modality. Several attempts have been made to defend against these adversarial attacks, particularly for the visual modality. In this paper, we perform detailed benchmarking of well-proven adversarial defense methodologies on time-series data. We restrict ourselves to the $L_{\infty}$ threat model. We also explore the trade-off between smoothness and clean accuracy for regularization-based defenses to better understand the trade-offs that they offer. Our analysis shows that the explored adversarial defenses offer robustness against both strong white-box as well as black-box attacks. This paves the way for future research in the direction of adversarial attacks and defenses, particularly for time-series data.

We propose r-ssGPFA, an unsupervised online anomaly detection model for uni- and multivariate time series building on the efficient state space formulation of Gaussian processes. For high-dimensional time series, we propose an extension of Gaussian process factor analysis to identify the common latent processes of the time series, allowing us to detect anomalies efficiently in an interpretable manner. We gain explainability while speeding up computations by imposing an orthogonality constraint on the mapping from the latent to the observed. Our model's robustness is improved by using a simple heuristic to skip Kalman updates when encountering anomalous observations. We investigate the behaviour of our model on synthetic data and show on standard benchmark datasets that our method is competitive with state-of-the-art methods while being computationally cheaper.

Time-series anomaly detection plays a vital role in monitoring complex operation conditions. However, the detection accuracy of existing approaches is heavily influenced by pattern distribution, existence of multiple normal patterns, dynamical features representation, and parameter settings. For the purpose of improving the robustness and guaranteeing the accuracy, this research combined the strengths of negative selection, unthresholded recurrence plots, and an extreme learning machine autoencoder and then proposed robust anomaly detection for time-series data (RADTD), which can automatically learn dynamical features in time series and recognize anomalies with low label dependency and high robustness. Yahoo benchmark datasets and three tunneling engineering simulation experiments were used to evaluate the performance of RADTD. The experiments showed that in benchmark datasets RADTD possessed higher accuracy and robustness than recurrence qualification analysis and extreme learning machine autoencoder, respectively, and that RADTD accurately detected the occurrence of tunneling settlement accidents, indicating its remarkable performance in accuracy and robustness. 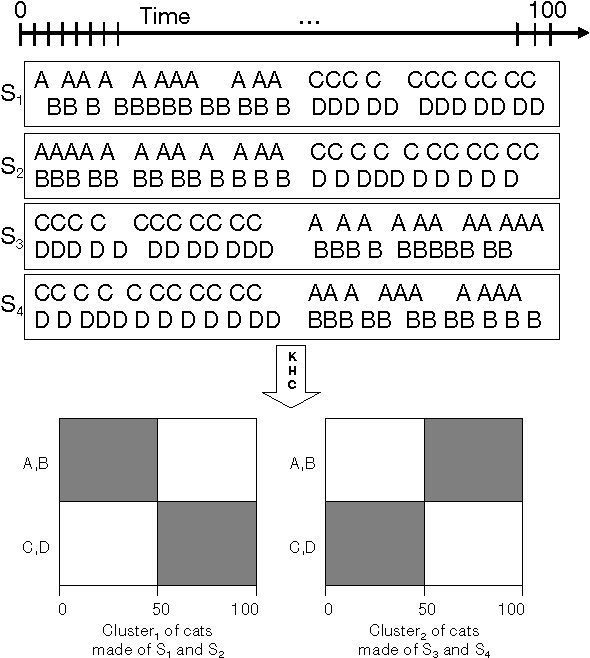 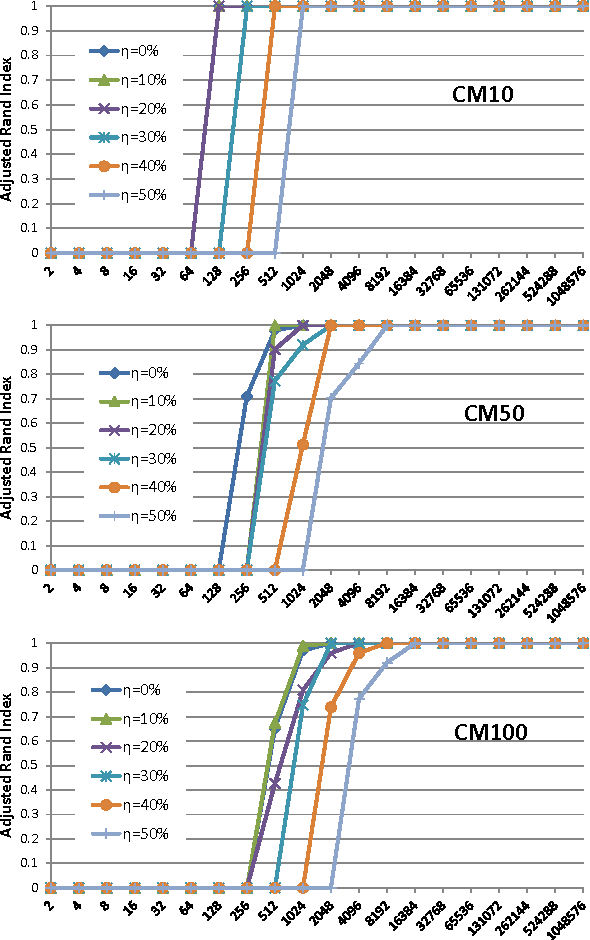 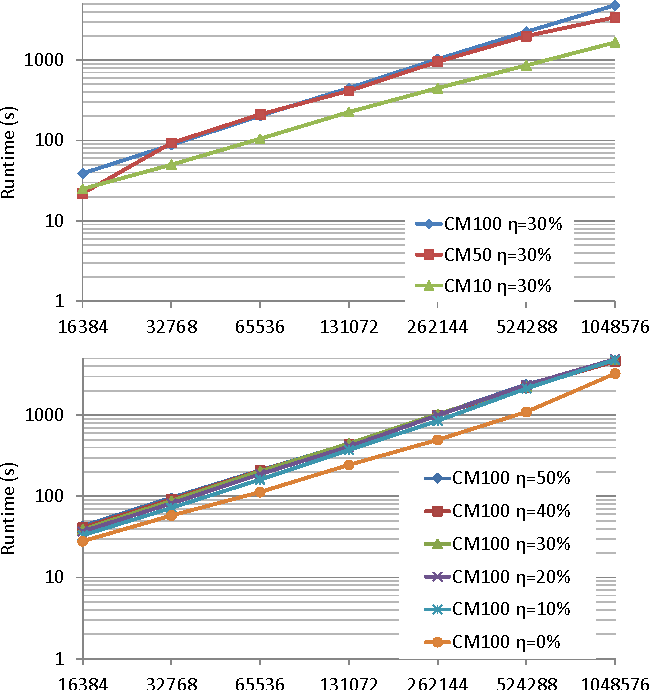 We suggest a novel method of clustering and exploratory analysis of temporal event sequences data (also known as categorical time series) based on three-dimensional data grid models. A data set of temporal event sequences can be represented as a data set of three-dimensional points, each point is defined by three variables: a sequence identifier, a time value and an event value. Instantiating data grid models to the 3D-points turns the problem into 3D-coclustering. The sequences are partitioned into clusters, the time variable is discretized into intervals and the events are partitioned into clusters. The cross-product of the univariate partitions forms a multivariate partition of the representation space, i.e., a grid of cells and it also represents a nonparametric estimator of the joint distribution of the sequences, time and events dimensions. Thus, the sequences are grouped together because they have similar joint distribution of time and events, i.e., similar distribution of events along the time dimension. The best data grid is computed using a parameter-free Bayesian model selection approach. We also suggest several criteria for exploiting the resulting grid through agglomerative hierarchies, for interpreting the clusters of sequences and characterizing their components through insightful visualizations. Extensive experiments on both synthetic and real-world data sets demonstrate that data grid models are efficient, effective and discover meaningful underlying patterns of categorical time series data.

Sintel: A Machine Learning Framework to Extract Insights from Signals 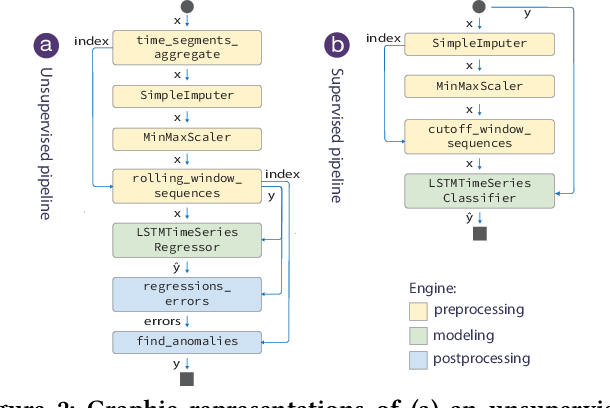 The detection of anomalies in time series data is a critical task with many monitoring applications. Existing systems often fail to encompass an end-to-end detection process, to facilitate comparative analysis of various anomaly detection methods, or to incorporate human knowledge to refine output. This precludes current methods from being used in real-world settings by practitioners who are not ML experts. In this paper, we introduce Sintel, a machine learning framework for end-to-end time series tasks such as anomaly detection. The framework uses state-of-the-art approaches to support all steps of the anomaly detection process. Sintel logs the entire anomaly detection journey, providing detailed documentation of anomalies over time. It enables users to analyze signals, compare methods, and investigate anomalies through an interactive visualization tool, where they can annotate, modify, create, and remove events. Using these annotations, the framework leverages human knowledge to improve the anomaly detection pipeline. We demonstrate the usability, efficiency, and effectiveness of Sintel through a series of experiments on three public time series datasets, as well as one real-world use case involving spacecraft experts tasked with anomaly analysis tasks. Sintel's framework, code, and datasets are open-sourced at https://github.com/sintel-dev/. 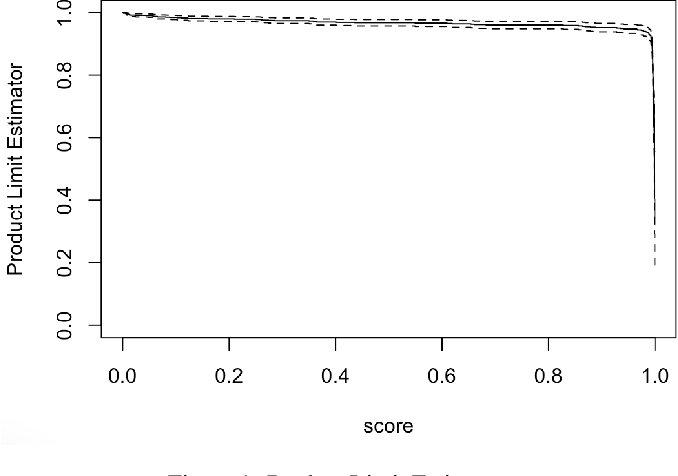 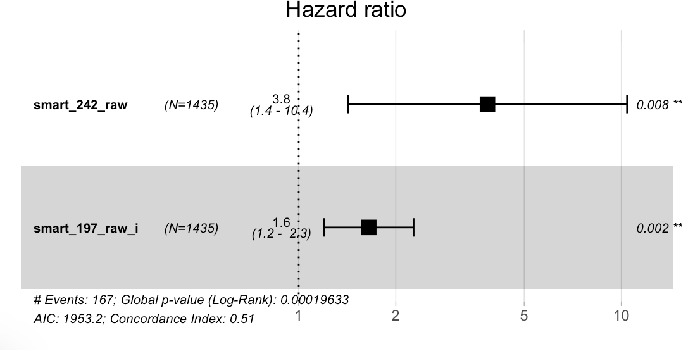 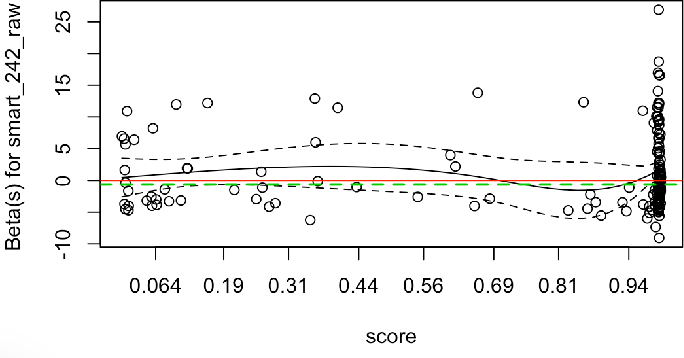 The use of deep neural networks to make high risk decisions creates a need for global and local explanations so that users and experts have confidence in the modeling algorithms. We introduce a novel technique to find global and local explanations for time series data used in binary classification machine learning systems. We identify the most salient of the original features used by a black box model to distinguish between classes. The explanation can be made on categorical, continuous, and time series data and can be generalized to any binary classification model. The analysis is conducted on time series data to train a long short-term memory deep neural network and uses the time dependent structure of the underlying features in the explanation. The proposed technique attributes weights to features to explain an observations risk of belonging to a class as a multiplicative factor of a base hazard rate. We use a variation of the Cox Proportional Hazards regression, a Generalized Additive Model, to explain the effect of variables upon the probability of an in-class response for a score output from the black box model. The covariates incorporate time dependence structure in the features so the explanation is inclusive of the underlying time series data structure. 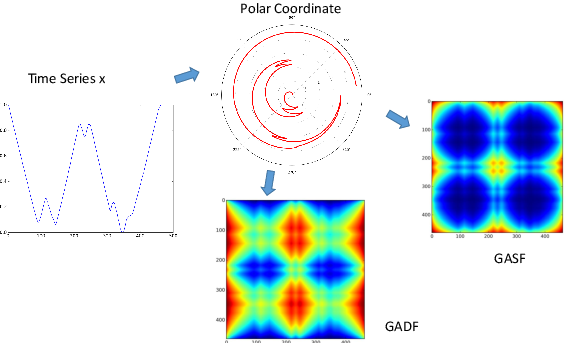 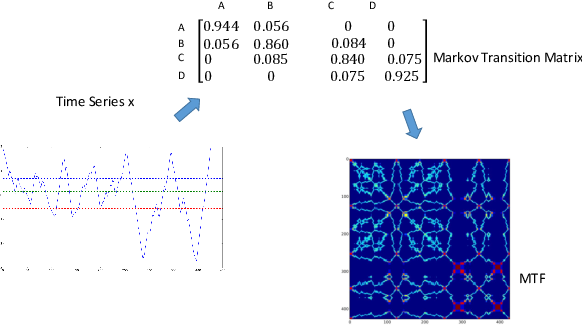 Inspired by recent successes of deep learning in computer vision, we propose a novel framework for encoding time series as different types of images, namely, Gramian Angular Summation/Difference Fields (GASF/GADF) and Markov Transition Fields (MTF). This enables the use of techniques from computer vision for time series classification and imputation. We used Tiled Convolutional Neural Networks (tiled CNNs) on 20 standard datasets to learn high-level features from the individual and compound GASF-GADF-MTF images. Our approaches achieve highly competitive results when compared to nine of the current best time series classification approaches. Inspired by the bijection property of GASF on 0/1 rescaled data, we train Denoised Auto-encoders (DA) on the GASF images of four standard and one synthesized compound dataset. The imputation MSE on test data is reduced by 12.18%-48.02% when compared to using the raw data. An analysis of the features and weights learned via tiled CNNs and DAs explains why the approaches work.

Innovations Autoencoder and its Application in Real-Time Anomaly Detection 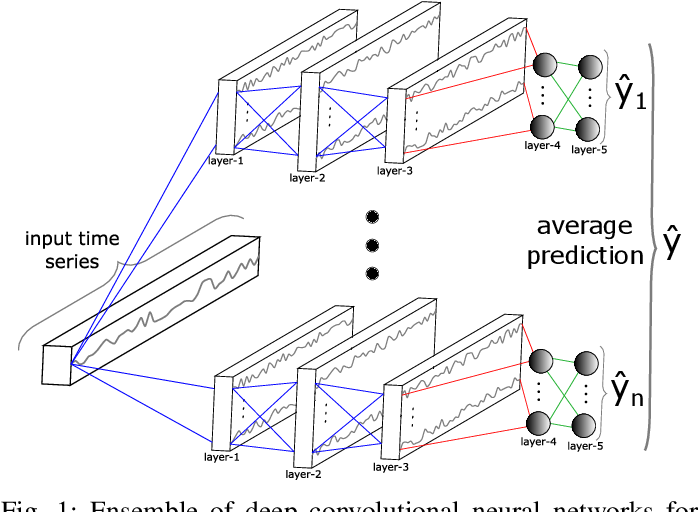 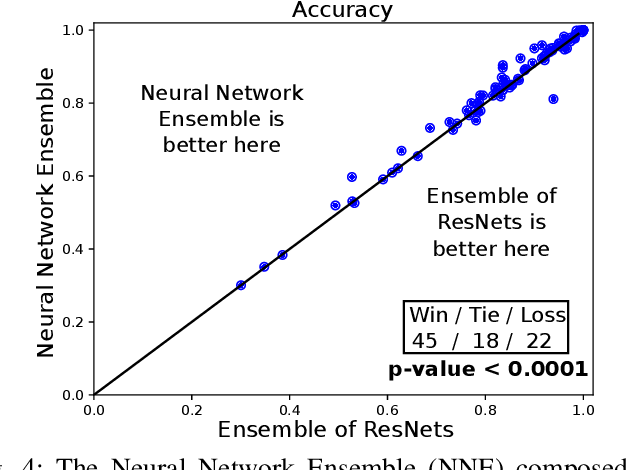 Deep neural networks have revolutionized many fields such as computer vision and natural language processing. Inspired by this recent success, deep learning started to show promising results for Time Series Classification (TSC). However, neural networks are still behind the state-of-the-art TSC algorithms, that are currently composed of ensembles of 37 non deep learning based classifiers. We attribute this gap in performance due to the lack of neural network ensembles for TSC. Therefore in this paper, we show how an ensemble of 60 deep learning models can significantly improve upon the current state-of-the-art performance of neural networks for TSC, when evaluated over the UCR/UEA archive: the largest publicly available benchmark for time series analysis. Finally, we show how our proposed Neural Network Ensemble (NNE) is the first time series classifier to outperform COTE while reaching similar performance to the current state-of-the-art ensemble HIVE-COTE.