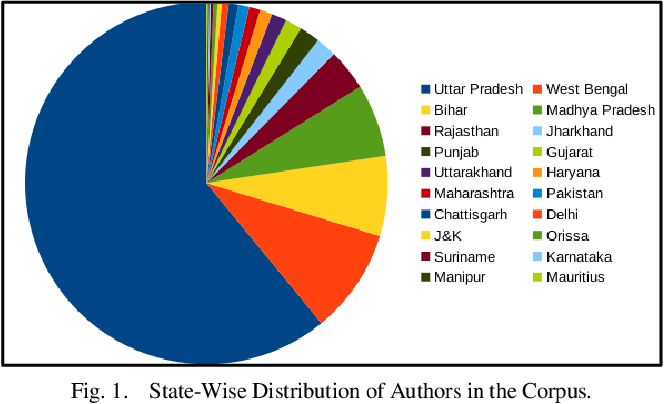 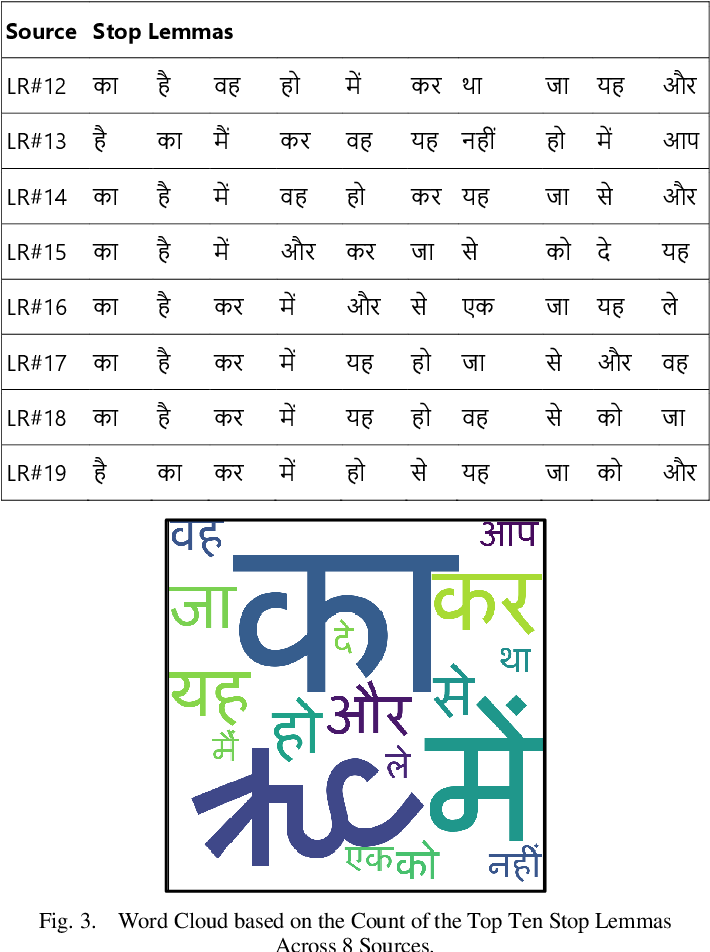 This paper is an effort to complement the contributions made by researchers working toward the inclusion of non-English languages in natural language processing studies. Two novel Hindi language resources have been created and released for public consumption. The first resource is a corpus consisting of nearly thousand pre-processed fictional and nonfictional texts spanning over hundred years. The second resource is an exhaustive list of stop lemmas created from 12 corpora across multiple domains, consisting of over 13 million words, from which more than 200,000 lemmas were generated, and 11 publicly available stop word lists comprising over 1000 words, from which nearly 400 unique lemmas were generated. This research lays emphasis on the use of stop lemmas instead of stop words owing to the presence of various, but not all morphological forms of a word in stop word lists, as opposed to the presence of only the root form of the word, from which variations could be derived if required. It was also observed that stop lemmas were more consistent across multiple sources as compared to stop words. In order to generate a stop lemma list, the parts of speech of the lemmas were investigated but rejected as it was found that there was no significant correlation between the rank of a word in the frequency list and its part of speech. The stop lemma list was assessed using a comparative method. A formal evaluation method is suggested as future work arising from this study. 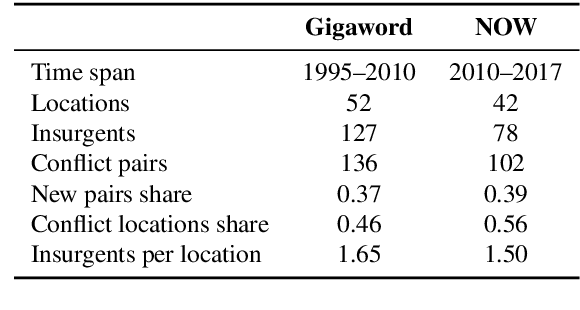 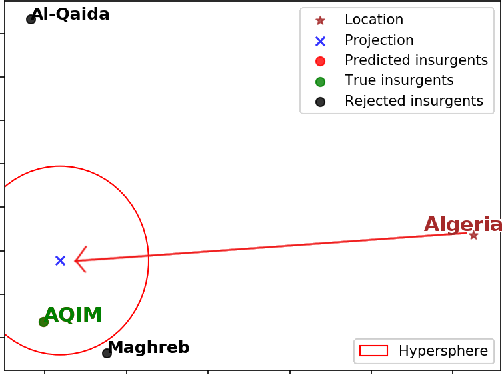 We extend the well-known word analogy task to a one-to-X formulation, including one-to-none cases, when no correct answer exists. The task is cast as a relation discovery problem and applied to historical armed conflicts datasets, attempting to predict new relations of type `location:armed-group' based on data about past events. As the source of semantic information, we use diachronic word embedding models trained on English news texts. A simple technique to improve diachronic performance in such task is demonstrated, using a threshold based on a function of cosine distance to decrease the number of false positives; this approach is shown to be beneficial on two different corpora. Finally, we publish a ready-to-use test set for one-to-X analogy evaluation on historical armed conflicts data. 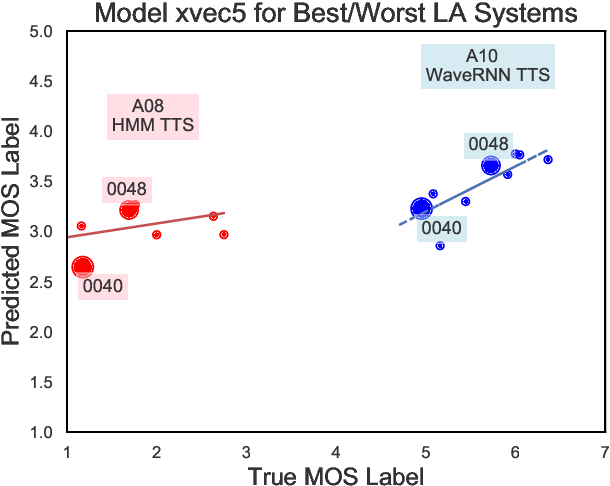 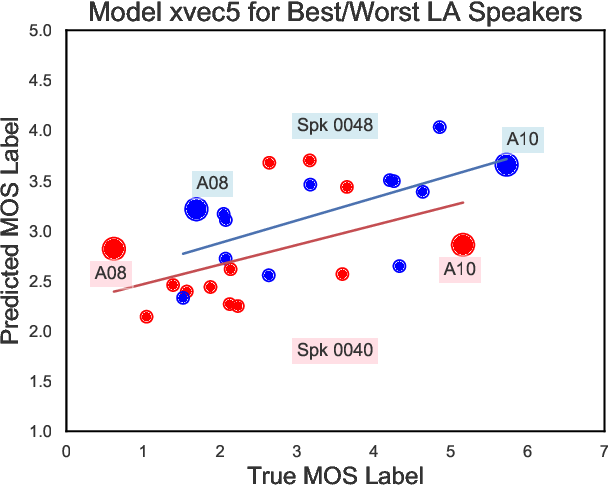 We aim to characterize how different speakers contribute to the perceived output quality of multi-speaker Text-to-Speech (TTS) synthesis. We automatically rate the quality of TTS using a neural network (NN) trained on human mean opinion score (MOS) ratings. First, we train and evaluate our NN model on 13 different TTS and voice conversion (VC) systems from the ASVSpoof 2019 Logical Access (LA) Dataset. Since it is not known how best to represent speech for this task, we compare 8 different representations alongside MOSNet frame-based features. Our representations include image-based spectrogram features and x-vector embeddings that explicitly model different types of noise such as T60 reverberation time. Our NN predicts MOS with a high correlation to human judgments. We report prediction correlation and error. A key finding is the quality achieved for certain speakers seems consistent, regardless of the TTS or VC system. It is widely accepted that some speakers give higher quality than others for building a TTS system: our method provides an automatic way to identify such speakers. Finally, to see if our quality prediction models generalize, we predict quality scores for synthetic speech using a separate multi-speaker TTS system that was trained on LibriTTS data, and conduct our own MOS listening test to compare human ratings with our NN predictions. 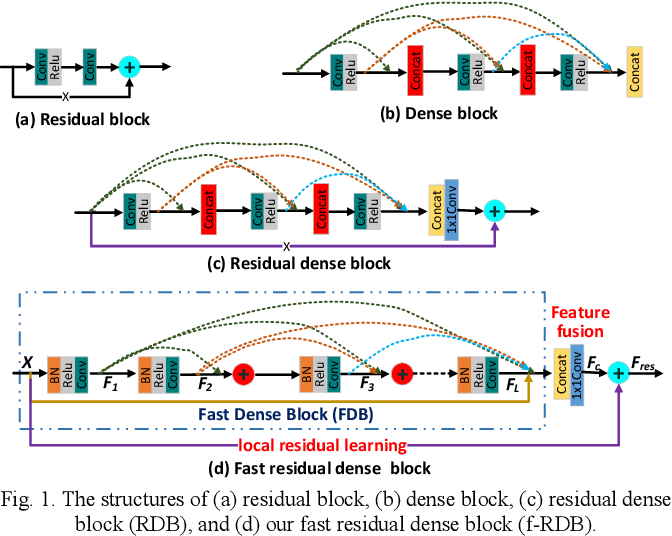 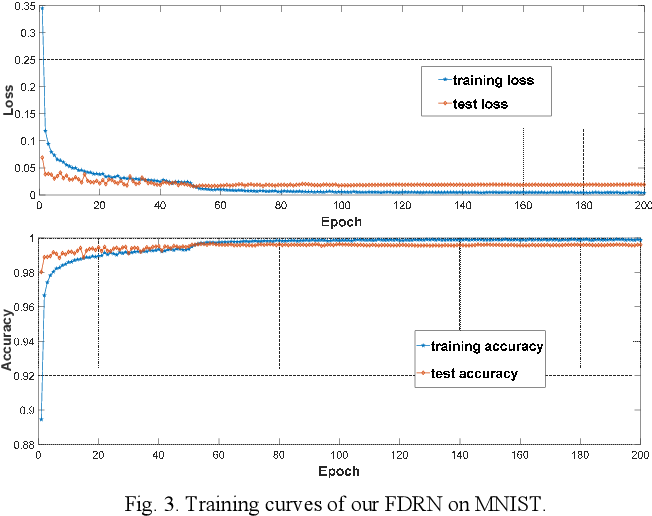 Deep Convolutional Neural Networks (CNNs), such as Dense Convolutional Networks (DenseNet), have achieved great success for image representation by discovering deep hierarchical information. However, most existing networks simply stacks the convolutional layers and hence failing to fully discover local and global feature information among layers. In this paper, we mainly explore how to enhance the local and global dense feature flow by exploiting hierarchical features fully from all the convolution layers. Technically, we propose an efficient and effective CNN framework, i.e., Fast Dense Residual Network (FDRN), for text recognition. To construct FDRN, we propose a new fast residual dense block (f-RDB) to retain the ability of local feature fusion and local residual learning of original RDB, which can reduce the computing efforts at the same time. After fully learning local residual dense features, we utilize the sum operation and several f-RDBs to define a new block termed global dense block (GDB) by imitating the construction of dense blocks to learn global dense residual features adaptively in a holistic way. Finally, we use two convolution layers to construct a down-sampling block to reduce the global feature size and extract deeper features. Extensive simulations show that FDRN obtains the enhanced recognition results, compared with other related models. 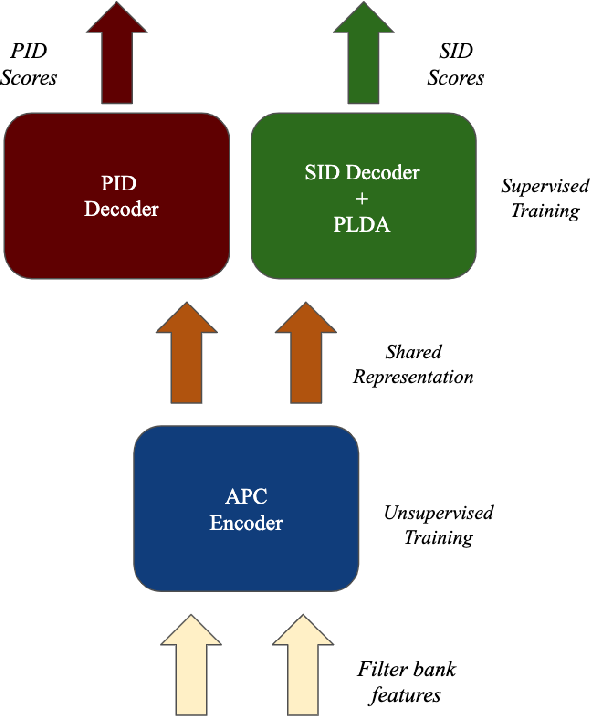 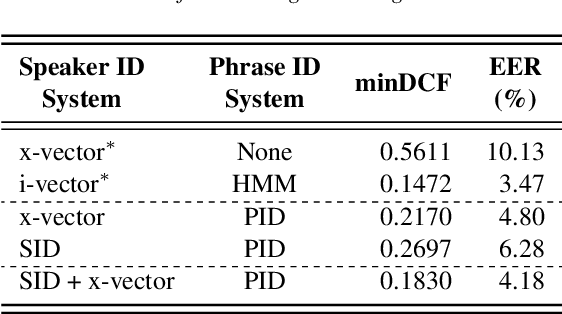 In this paper, we propose a novel way of addressing text-dependent automatic speaker verification (TD-ASV) by using a shared-encoder with task-specific decoders. An autoregressive predictive coding (APC) encoder is pre-trained in an unsupervised manner using both out-of-domain (LibriSpeech, VoxCeleb) and in-domain (DeepMine) unlabeled datasets to learn generic, high-level feature representation that encapsulates speaker and phonetic content. Two task-specific decoders were trained using labeled datasets to classify speakers (SID) and phrases (PID). Speaker embeddings extracted from the SID decoder were scored using a PLDA. SID and PID systems were fused at the score level. There is a 51.9% relative improvement in minDCF for our system compared to the fully supervised x-vector baseline on the cross-lingual DeepMine dataset. However, the i-vector/HMM method outperformed the proposed APC encoder-decoder system. A fusion of the x-vector/PLDA baseline and the SID/PLDA scores prior to PID fusion further improved performance by 15% indicating complementarity of the proposed approach to the x-vector system. We show that the proposed approach can leverage from large, unlabeled, data-rich domains, and learn speech patterns independent of downstream tasks. Such a system can provide competitive performance in domain-mismatched scenarios where test data is from data-scarce domains. 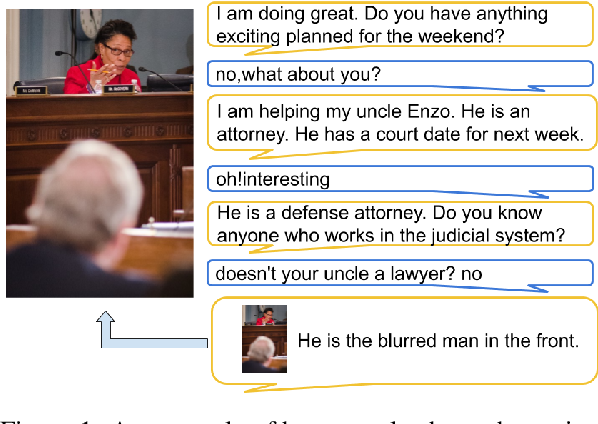 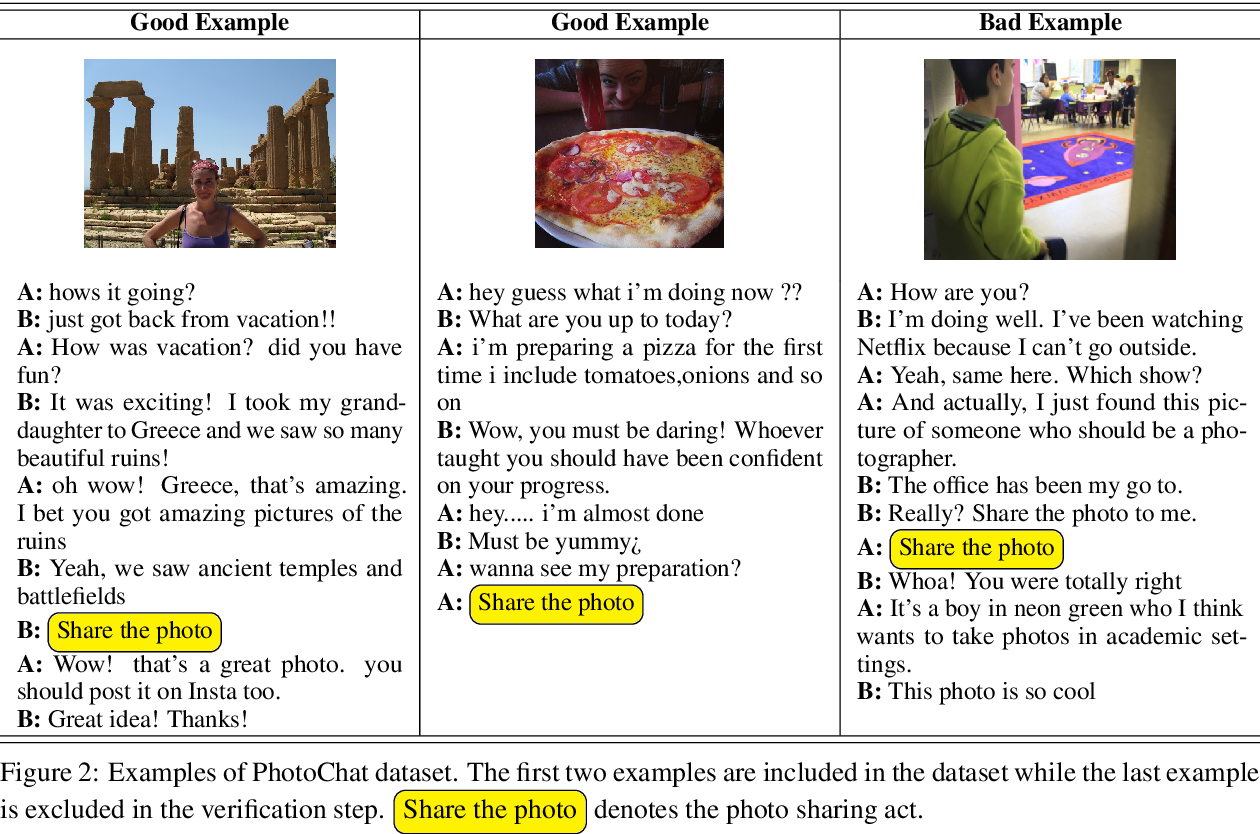 We present a new human-human dialogue dataset - PhotoChat, the first dataset that casts light on the photo sharing behavior in onlin emessaging. PhotoChat contains 12k dialogues, each of which is paired with a user photo that is shared during the conversation. Based on this dataset, we propose two tasks to facilitate research on image-text modeling: a photo-sharing intent prediction task that predicts whether one intends to share a photo in the next conversation turn, and a photo retrieval task that retrieves the most relevant photo according to the dialogue context. In addition, for both tasks, we provide baseline models using the state-of-the-art models and report their benchmark performances. The best image retrieval model achieves 10.4% [email protected] (out of 1000 candidates) and the best photo intent prediction model achieves 58.1% F1 score, indicating that the dataset presents interesting yet challenging real-world problems. We are releasing PhotoChat to facilitate future research work among the community. 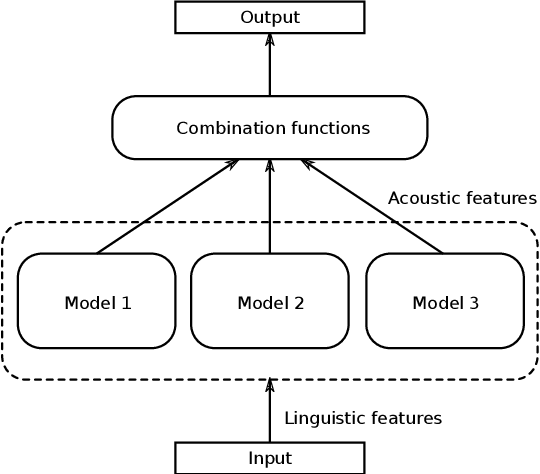 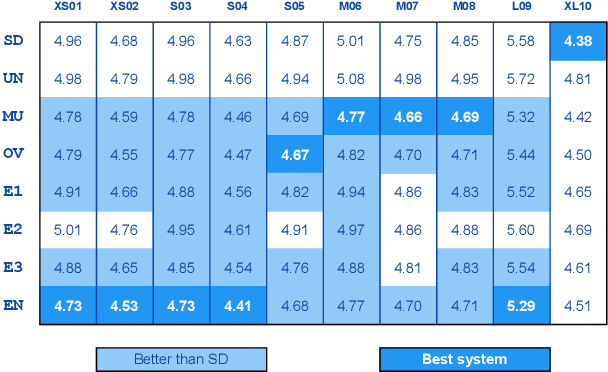 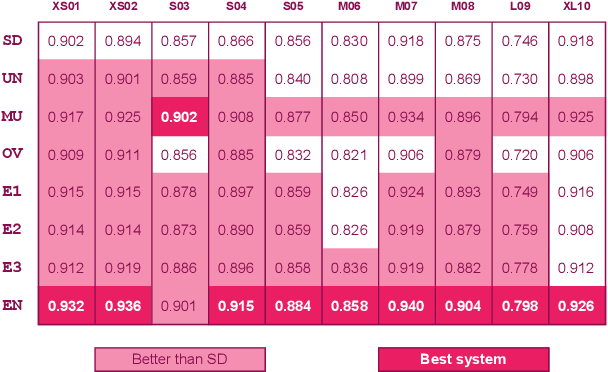 When the available data of a target speaker is insufficient to train a high quality speaker-dependent neural text-to-speech (TTS) system, we can combine data from multiple speakers and train a multi-speaker TTS model instead. Many studies have shown that neural multi-speaker TTS model trained with a small amount data from multiple speakers combined can generate synthetic speech with better quality and stability than a speaker-dependent one. However when the amount of data from each speaker is highly unbalanced, the best approach to make use of the excessive data remains unknown. Our experiments showed that simply combining all available data from every speaker to train a multi-speaker model produces better than or at least similar performance to its speaker-dependent counterpart. Moreover by using an ensemble multi-speaker model, in which each subsystem is trained on a subset of available data, we can further improve the quality of the synthetic speech especially for underrepresented speakers whose training data is limited. 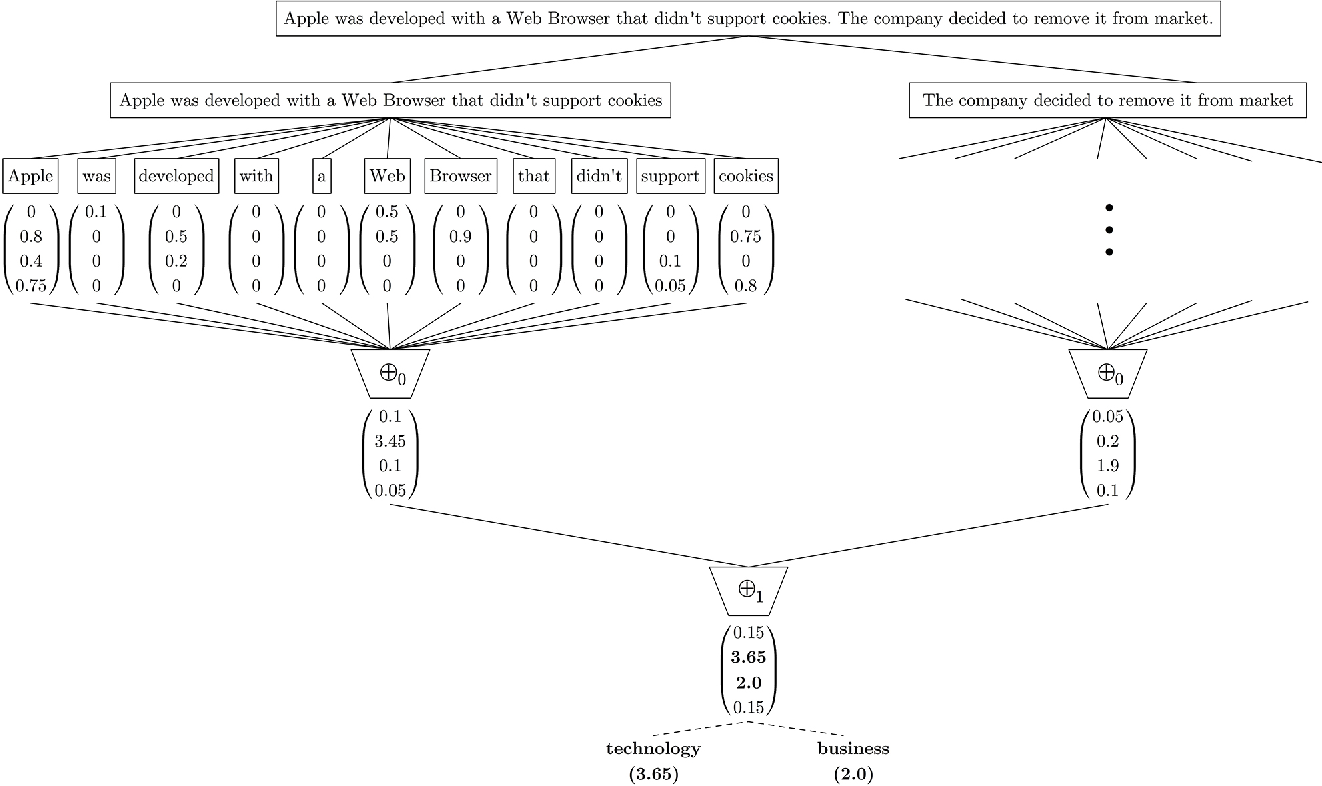 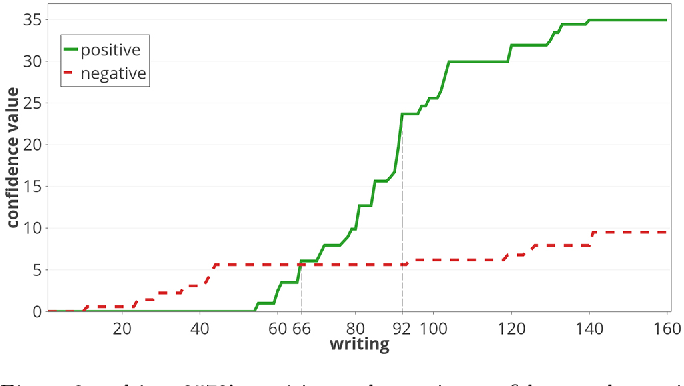 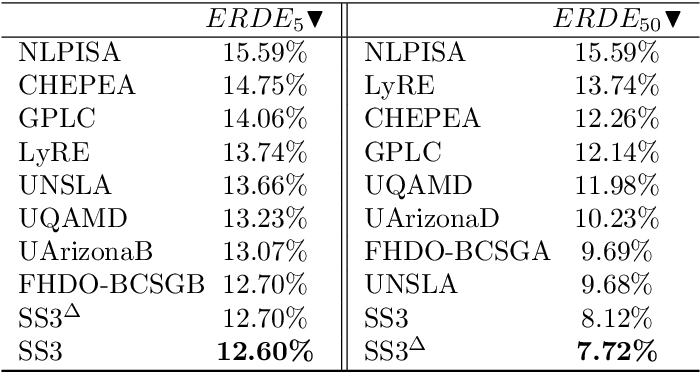 With the rise of the Internet, there is a growing need to build intelligent systems that are capable of efficiently dealing with early risk detection (ERD) problems on social media, such as early depression detection, early rumor detection or identification of sexual predators. These systems, nowadays mostly based on machine learning techniques, must be able to deal with data streams since users provide their data over time. In addition, these systems must be able to decide when the processed data is sufficient to actually classify users. Moreover, since ERD tasks involve risky decisions by which people's lives could be affected, such systems must also be able to justify their decisions. However, most standard and state-of-the-art supervised machine learning models (such as SVM, MNB, Neural Networks, etc.) are not well suited to deal with this scenario. This is due to the fact that they either act as black boxes or do not support incremental classification/learning. In this paper we introduce SS3, a novel supervised learning model for text classification that naturally supports these aspects. SS3 was designed to be used as a general framework to deal with ERD problems. We evaluated our model on the CLEF's eRisk2017 pilot task on early depression detection. Most of the 30 contributions submitted to this competition used state-of-the-art methods. Experimental results show that our classifier was able to outperform these models and standard classifiers, despite being less computationally expensive and having the ability to explain its rationale. 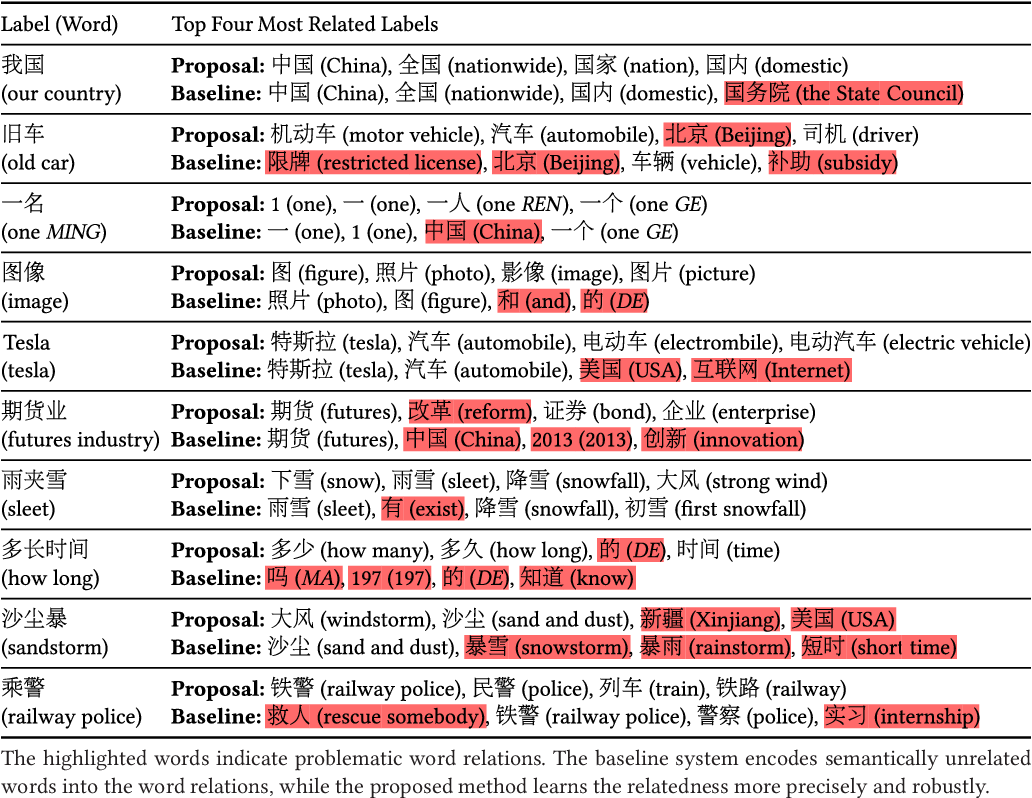 Abstractive text summarization is a highly difficult problem, and the sequence-to-sequence model has shown success in improving the performance on the task. However, the generated summaries are often inconsistent with the source content in semantics. In such cases, when generating summaries, the model selects semantically unrelated words with respect to the source content as the most probable output. The problem can be attributed to heuristically constructed training data, where summaries can be unrelated to the source content, thus containing semantically unrelated words and spurious word correspondence. In this paper, we propose a regularization approach for the sequence-to-sequence model and make use of what the model has learned to regularize the learning objective to alleviate the effect of the problem. In addition, we propose a practical human evaluation method to address the problem that the existing automatic evaluation method does not evaluate the semantic consistency with the source content properly. Experimental results demonstrate the effectiveness of the proposed approach, which outperforms almost all the existing models. Especially, the proposed approach improves the semantic consistency by 4\% in terms of human evaluation.

Sexual harassment in academia is often a hidden problem because victims are usually reluctant to report their experiences. Recently, a web survey was developed to provide an opportunity to share thousands of sexual harassment experiences in academia. Using an efficient approach, this study collected and investigated more than 2,000 sexual harassment experiences to better understand these unwanted advances in higher education. This paper utilized text mining to disclose hidden topics and explore their weight across three variables: harasser gender, institution type, and victim's field of study. We mapped the topics on five themes drawn from the sexual harassment literature and found that more than 50% of the topics were assigned to the unwanted sexual attention theme. Fourteen percent of the topics were in the gender harassment theme, in which insulting, sexist, or degrading comments or behavior was directed towards women. Five percent of the topics involved sexual coercion (a benefit is offered in exchange for sexual favors), 5% involved sex discrimination, and 7% of the topics discussed retaliation against the victim for reporting the harassment, or for simply not complying with the harasser. Findings highlight the power differential between faculty and students, and the toll on students when professors abuse their power. While some topics did differ based on type of institution, there were no differences between the topics based on gender of harasser or field of study. This research can be beneficial to researchers in further investigation of this paper's dataset, and to policymakers in improving existing policies to create a safe and supportive environment in academia.