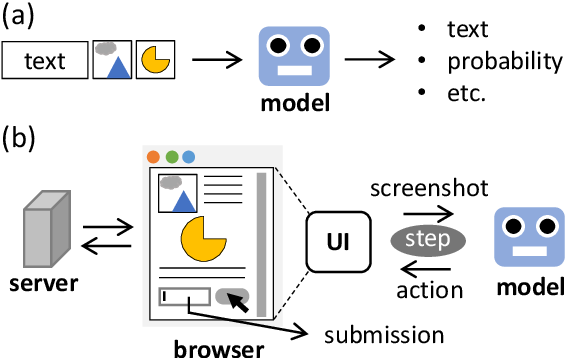 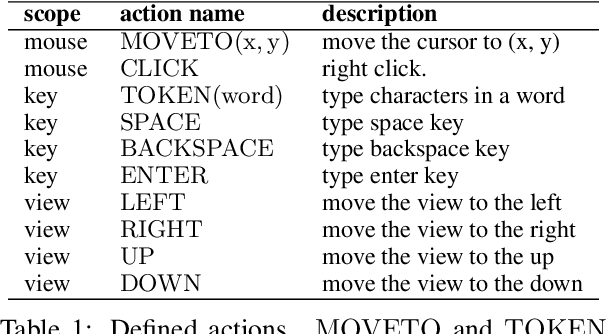 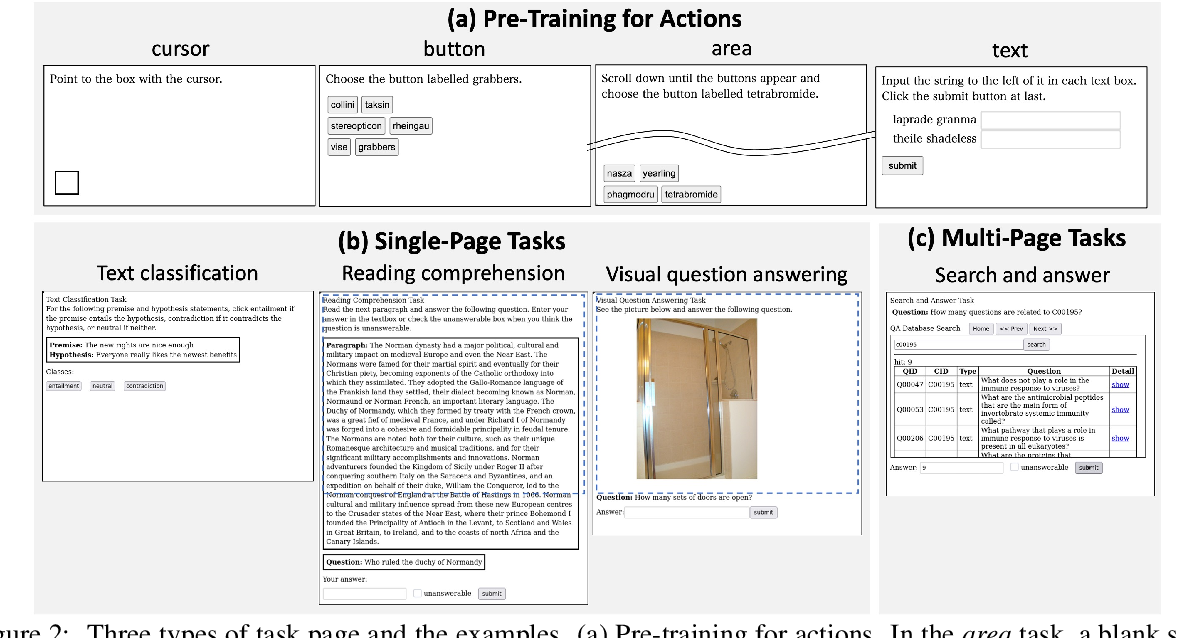 Pre-trained Transformers are good foundations for unified multi-task models owing to their task-agnostic representation. Pre-trained Transformers are often combined with text-to-text framework to execute multiple tasks by a single model. Performing a task through a graphical user interface (GUI) is another candidate to accommodate various tasks, including multi-step tasks with vision and language inputs. However, few papers combine pre-trained Transformers with performing through GUI. To fill this gap, we explore a framework in which a model performs a task by manipulating the GUI implemented with web pages in multiple steps. We develop task pages with and without page transitions and propose a BERT extension for the framework. We jointly trained our BERT extension with those task pages, and made the following observations. (1) The model learned to use both task pages with and without page transition. (2) In four out of five tasks without page transitions, the model performs greater than 75% of the performance of the original BERT, which does not use browsers. (3) The model did not generalize effectively on unseen tasks. These results suggest that we can fine-tune BERTs to multi-step tasks through GUIs, and there is room for improvement in their generalizability. Code will be available online. 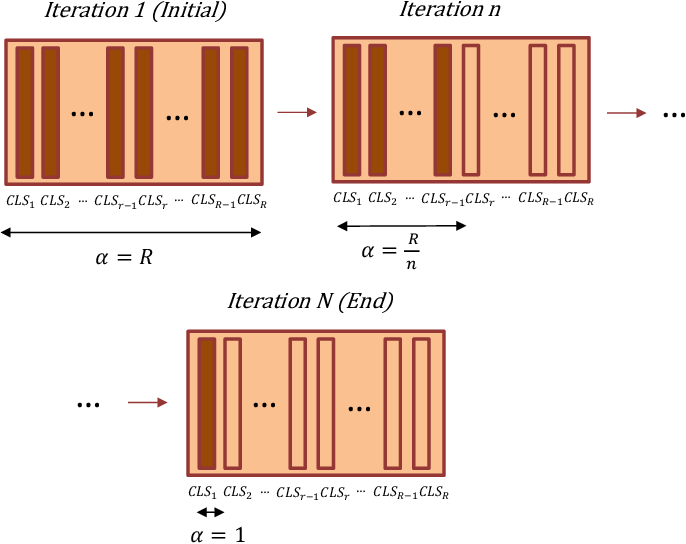 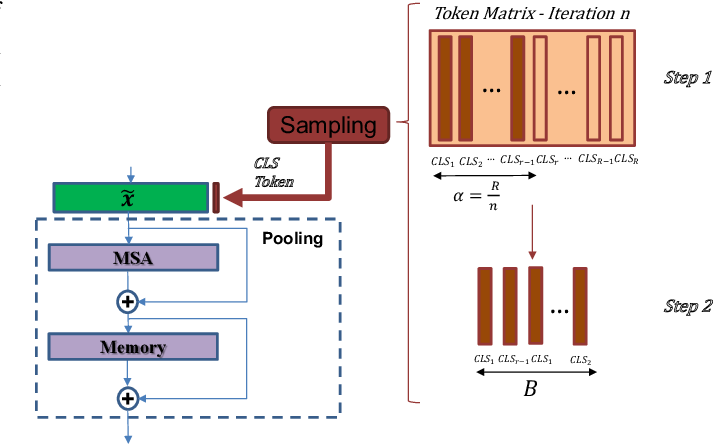 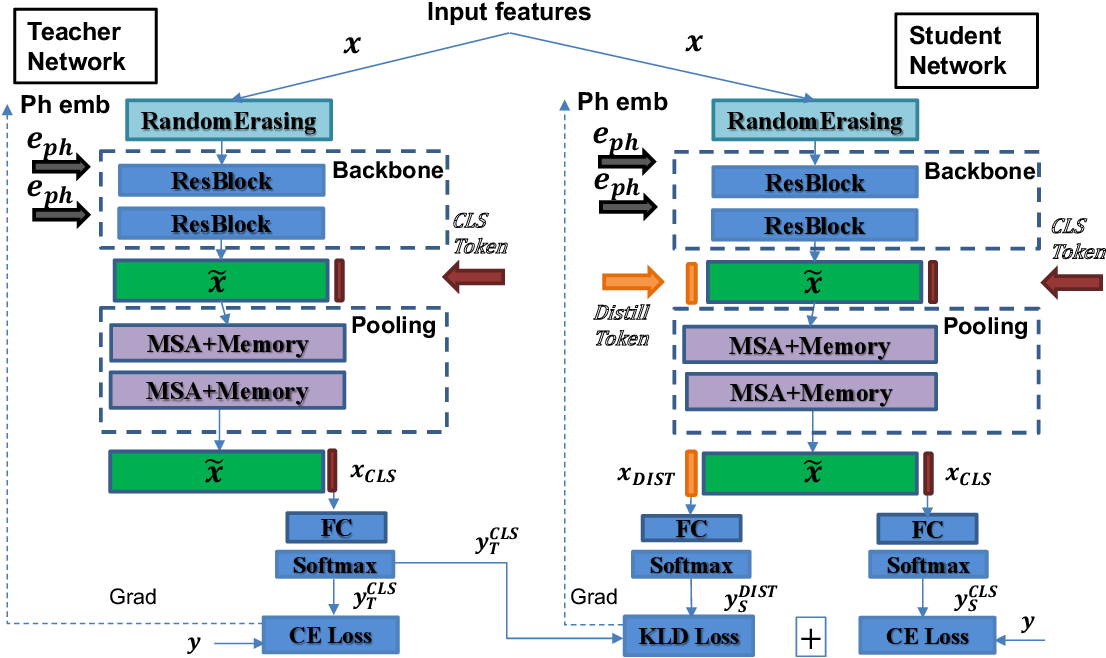 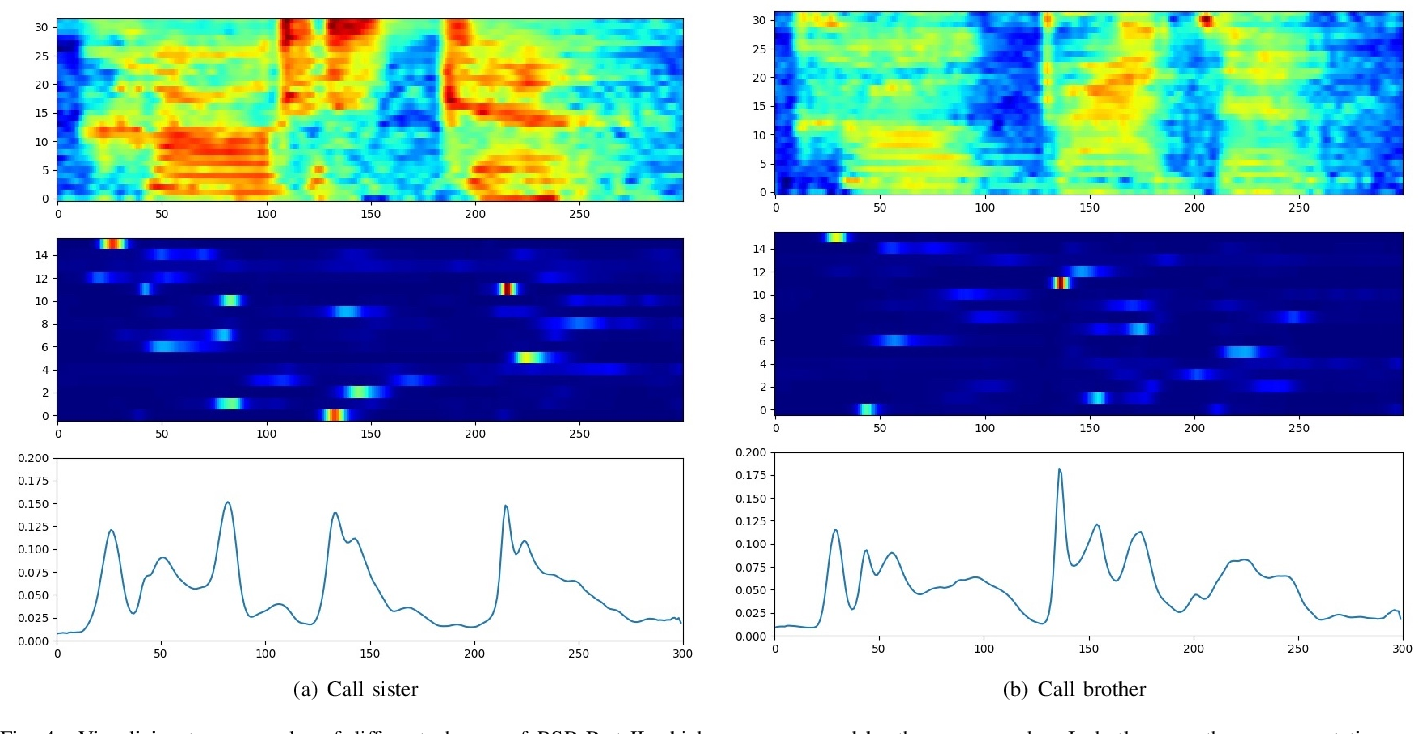 This paper explores three novel approaches to improve the performance of speaker verification (SV) systems based on deep neural networks (DNN) using Multi-head Self-Attention (MSA) mechanisms and memory layers. Firstly, we propose the use of a learnable vector called Class token to replace the average global pooling mechanism to extract the embeddings. Unlike global average pooling, our proposal takes into account the temporal structure of the input what is relevant for the text-dependent SV task. The class token is concatenated to the input before the first MSA layer, and its state at the output is used to predict the classes. To gain additional robustness, we introduce two approaches. First, we have developed a Bayesian estimation of the class token. Second, we have added a distilled representation token for training a teacher-student pair of networks using the Knowledge Distillation (KD) philosophy, which is combined with the class token. This distillation token is trained to mimic the predictions from the teacher network, while the class token replicates the true label. All the strategies have been tested on the RSR2015-Part II and DeepMine-Part 1 databases for text-dependent SV, providing competitive results compared to the same architecture using the average pooling mechanism to extract average embeddings.

Accurate layout analysis without subsequent text-line segmentation remains an ongoing challenge, especially when facing the Kangyur, a kind of historical Tibetan document featuring considerable touching components and mottled background. Aiming at identifying different regions in document images, layout analysis is indispensable for subsequent procedures such as character recognition. However, there was only a little research being carried out to perform line-level layout analysis which failed to deal with the Kangyur. To obtain the optimal results, a fine-grained sub-line level layout analysis approach is presented. Firstly, we introduced an accelerated method to build the dataset which is dynamic and reliable. Secondly, enhancement had been made to the SOLOv2 according to the characteristics of the Kangyur. Then, we fed the enhanced SOLOv2 with the prepared annotation file during the training phase. Once the network is trained, instances of the text line, sentence, and titles can be segmented and identified during the inference stage. The experimental results show that the proposed method delivers a decent 72.7% AP on our dataset. In general, this preliminary research provides insights into the fine-grained sub-line level layout analysis and testifies the SOLOv2-based approaches. We also believe that the proposed methods can be adopted on other language documents with various layouts.


* The manuscript contains 16 pages,14 figures, and 40 references in total 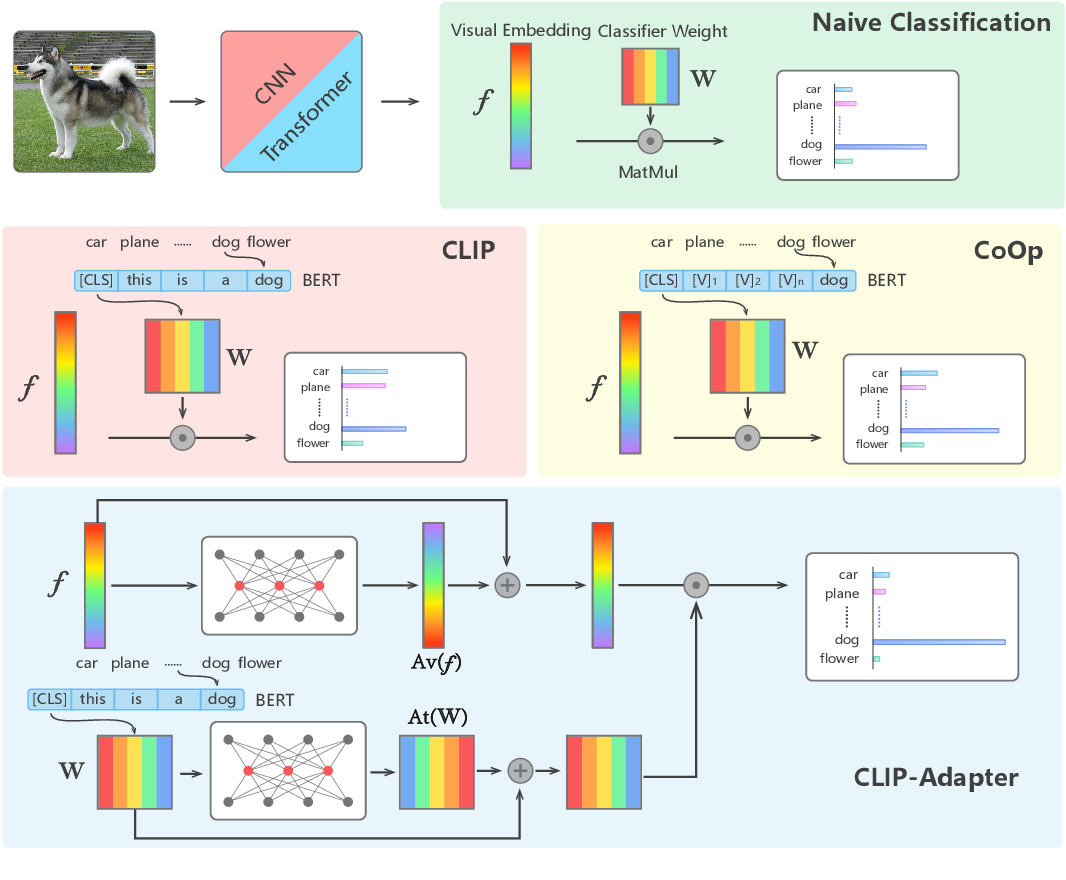 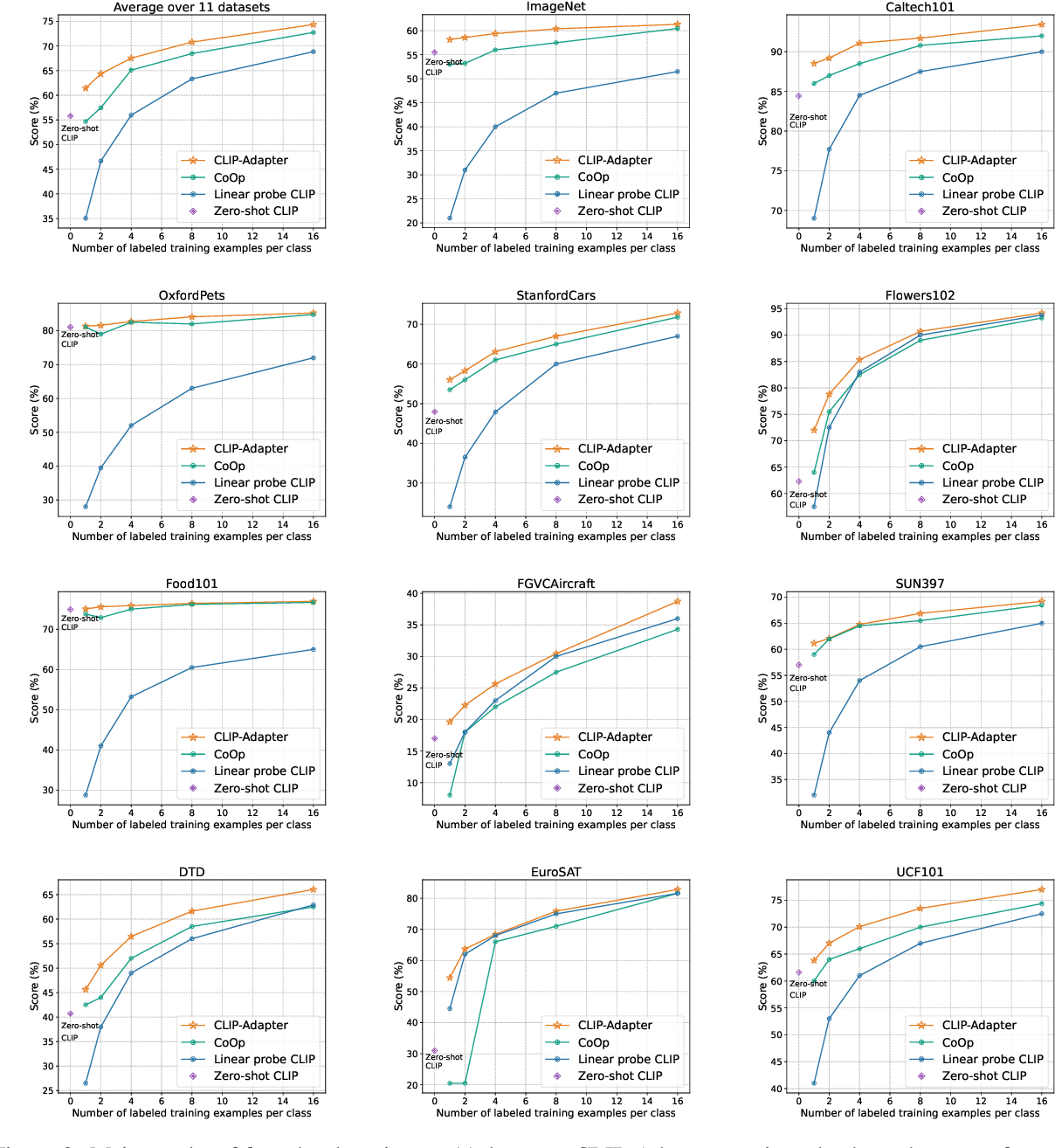 Large-scale contrastive vision-language pre-training has shown significant progress in visual representation learning. Unlike traditional visual systems trained by a fixed set of discrete labels, a new paradigm was introduced in \cite{radford2021learning} to directly learn to align images with raw texts in an open-vocabulary setting. On downstream tasks, a carefully chosen text prompt is employed to make zero-shot predictions.~To avoid non-trivial prompt engineering, context optimization \cite{zhou2021coop} has been proposed to learn continuous vectors as task-specific prompts with few-shot training examples.~In this paper, we show that there is an alternative path to achieve better vision-language models other than prompt tuning.~While prompt tuning is for the textual inputs, we propose CLIP-Adapter to conduct fine-tuning with feature adapters on either visual or language branch. Specifically, CLIP-Adapter adopts an additional bottleneck layer to learn new features and performs residual-style feature blending with the original pre-trained features.~As a consequence, CLIP-Adapter is able to outperform context optimization while maintains a simple design. Experiments and extensive ablation studies on various visual classification tasks demonstrate the effectiveness of our approach. 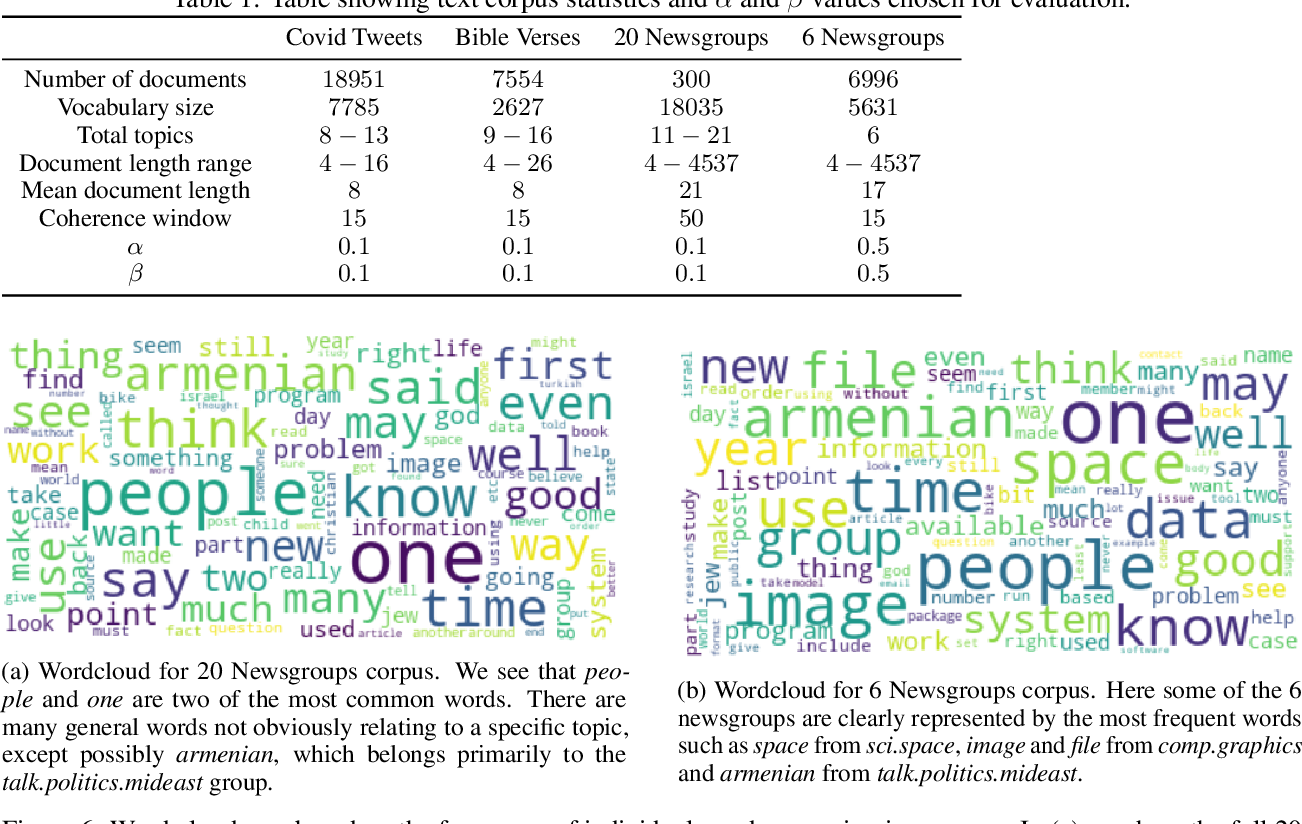 Variational Bayes (VB) applied to latent Dirichlet allocation (LDA) has become the most popular algorithm for aspect modeling. While sufficiently successful in text topic extraction from large corpora, VB is less successful in identifying aspects in the presence of limited data. We present a novel variational message passing algorithm as applied to Latent Dirichlet Allocation (LDA) and compare it with the gold standard VB and collapsed Gibbs sampling. In situations where marginalisation leads to non-conjugate messages, we use ideas from sampling to derive approximate update equations. In cases where conjugacy holds, Loopy Belief update (LBU) (also known as Lauritzen-Spiegelhalter) is used. Our algorithm, ALBU (approximate LBU), has strong similarities with Variational Message Passing (VMP) (which is the message passing variant of VB). To compare the performance of the algorithms in the presence of limited data, we use data sets consisting of tweets and news groups. Additionally, to perform more fine grained evaluations and comparisons, we use simulations that enable comparisons with the ground truth via Kullback-Leibler divergence (KLD). Using coherence measures for the text corpora and KLD with the simulations we show that ALBU learns latent distributions more accurately than does VB, especially for smaller data sets. 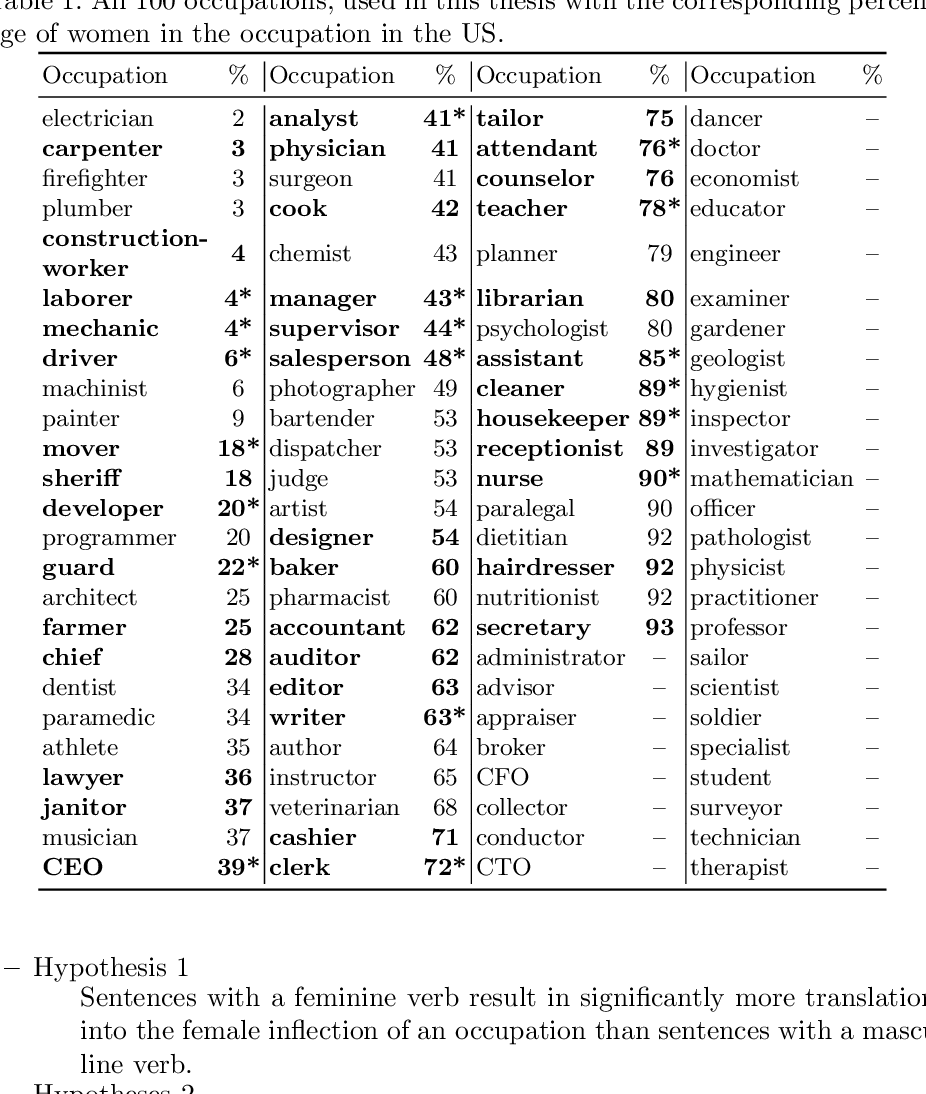 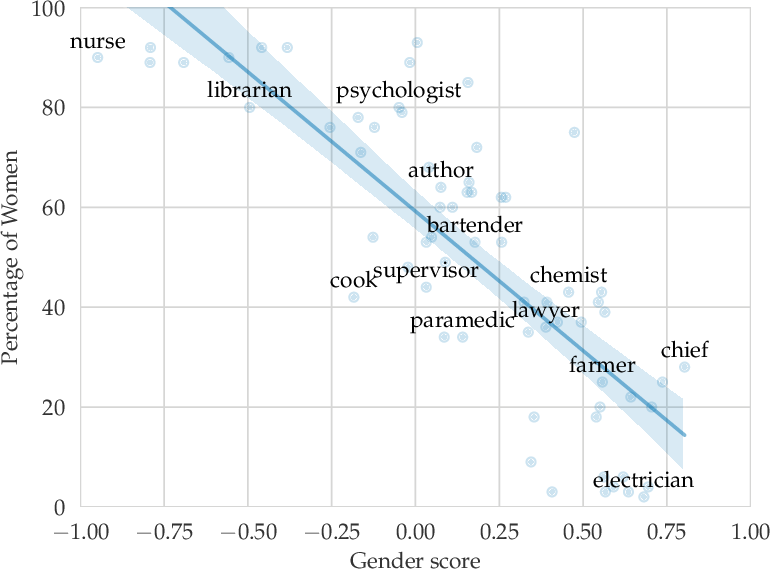 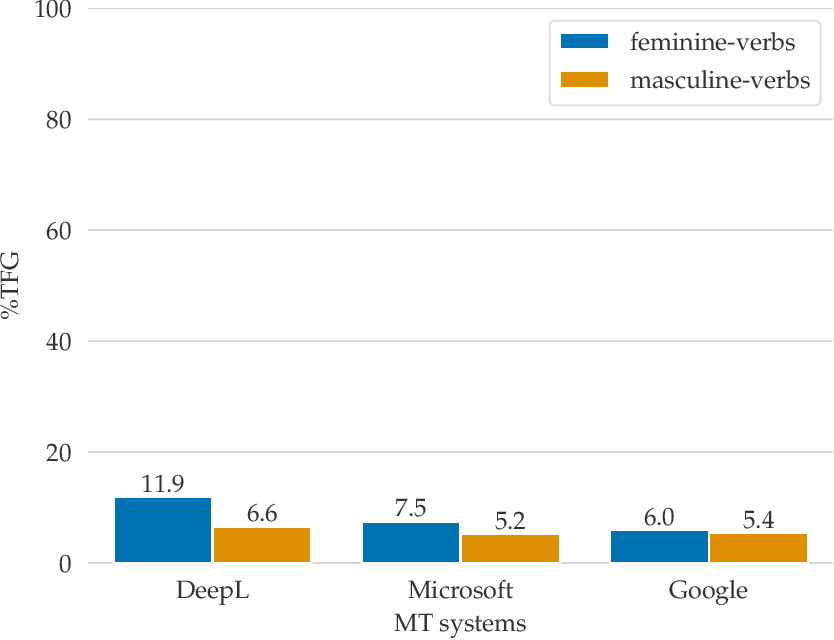 Human gender bias is reflected in language and text production. Because state-of-the-art machine translation (MT) systems are trained on large corpora of text, mostly generated by humans, gender bias can also be found in MT. For instance when occupations are translated from a language like English, which mostly uses gender neutral words, to a language like German, which mostly uses a feminine and a masculine version for an occupation, a decision must be made by the MT System. Recent research showed that MT systems are biased towards stereotypical translation of occupations. In 2019 the first, and so far only, challenge set, explicitly designed to measure the extent of gender bias in MT systems has been published. In this set measurement of gender bias is solely based on the translation of occupations. In this paper we present an extension of this challenge set, called WiBeMT, with gender-biased adjectives and adds sentences with gender-biased verbs. The resulting challenge set consists of over 70, 000 sentences and has been translated with three commercial MT systems: DeepL Translator, Microsoft Translator, and Google Translate. Results show a gender bias for all three MT systems. This gender bias is to a great extent significantly influenced by adjectives and to a lesser extent by verbs. 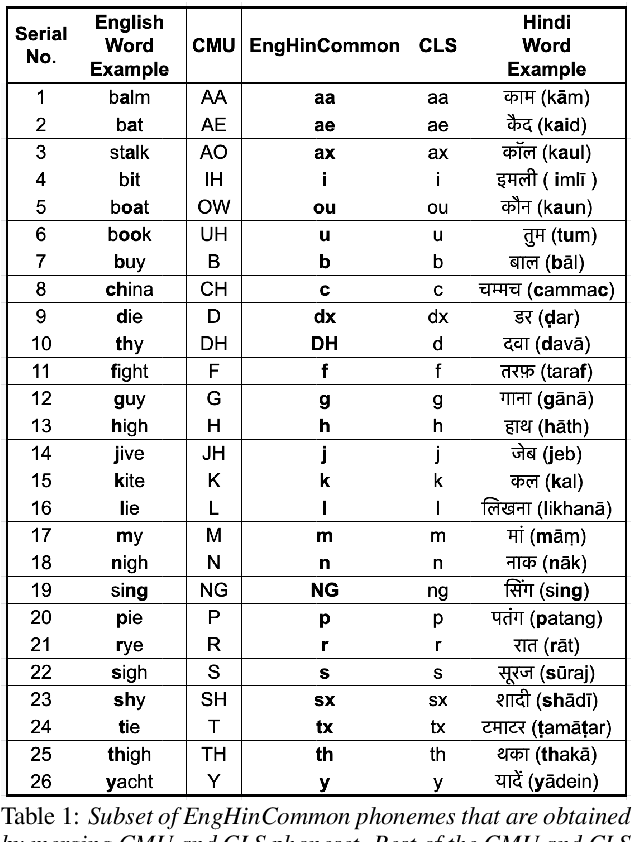 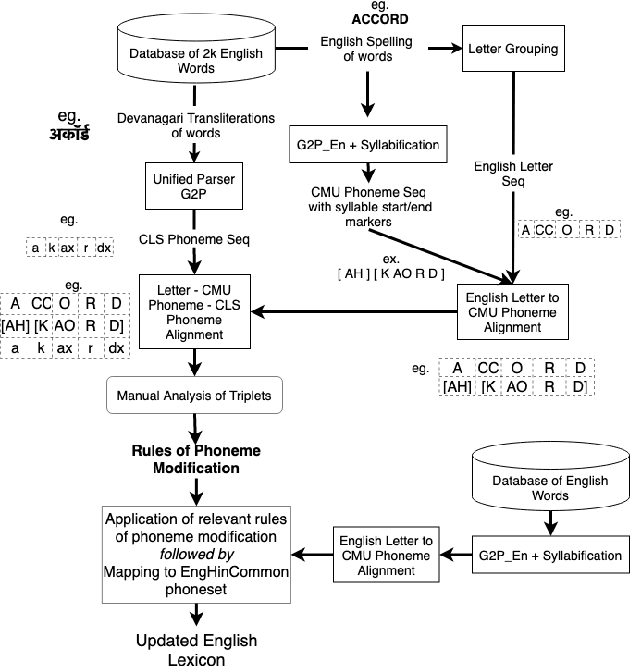 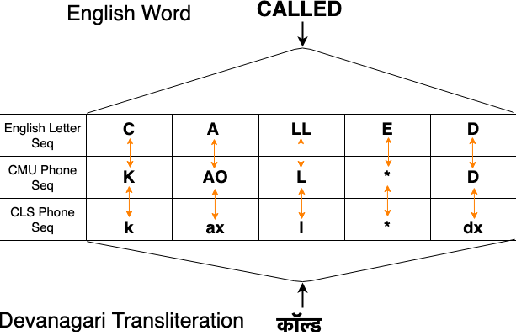 Geometry problem solving has attracted much attention in the NLP community recently. The task is challenging as it requires abstract problem understanding and symbolic reasoning with axiomatic knowledge. However, current datasets are either small in scale or not publicly available. Thus, we construct a new large-scale benchmark, Geometry3K, consisting of 3,002 geometry problems with dense annotation in formal language. We further propose a novel geometry solving approach with formal language and symbolic reasoning, called Interpretable Geometry Problem Solver (Inter-GPS). Inter-GPS first parses the problem text and diagram into formal language automatically via rule-based text parsing and neural object detecting, respectively. Unlike implicit learning in existing methods, Inter-GPS incorporates theorem knowledge as conditional rules and performs symbolic reasoning step by step. Also, a theorem predictor is designed to infer the theorem application sequence fed to the symbolic solver for the more efficient and reasonable searching path. Extensive experiments on the Geometry3K and GEOS datasets demonstrate that Inter-GPS achieves significant improvements over existing methods. The project with code and data is available at https://lupantech.github.io/inter-gps.

TAT-QA: A Question Answering Benchmark on a Hybrid of Tabular and Textual Content in Finance 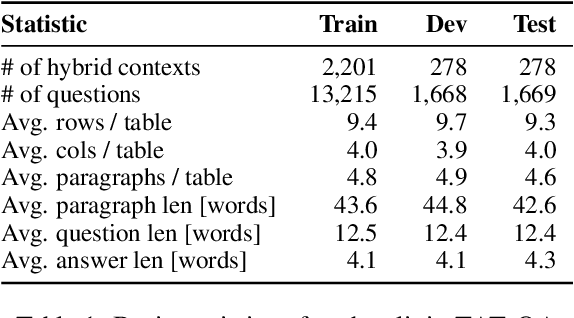 Hybrid data combining both tabular and textual content (e.g., financial reports) are quite pervasive in the real world. However, Question Answering (QA) over such hybrid data is largely neglected in existing research. In this work, we extract samples from real financial reports to build a new large-scale QA dataset containing both Tabular And Textual data, named TAT-QA, where numerical reasoning is usually required to infer the answer, such as addition, subtraction, multiplication, division, counting, comparison/sorting, and the compositions. We further propose a novel QA model termed TAGOP, which is capable of reasoning over both tables and text. It adopts sequence tagging to extract relevant cells from the table along with relevant spans from the text to infer their semantics, and then applies symbolic reasoning over them with a set of aggregation operators to arrive at the final answer. TAGOPachieves 58.0% inF1, which is an 11.1% absolute increase over the previous best baseline model, according to our experiments on TAT-QA. But this result still lags far behind performance of expert human, i.e.90.8% in F1. It is demonstrated that our TAT-QA is very challenging and can serve as a benchmark for training and testing powerful QA models that address hybrid form data.