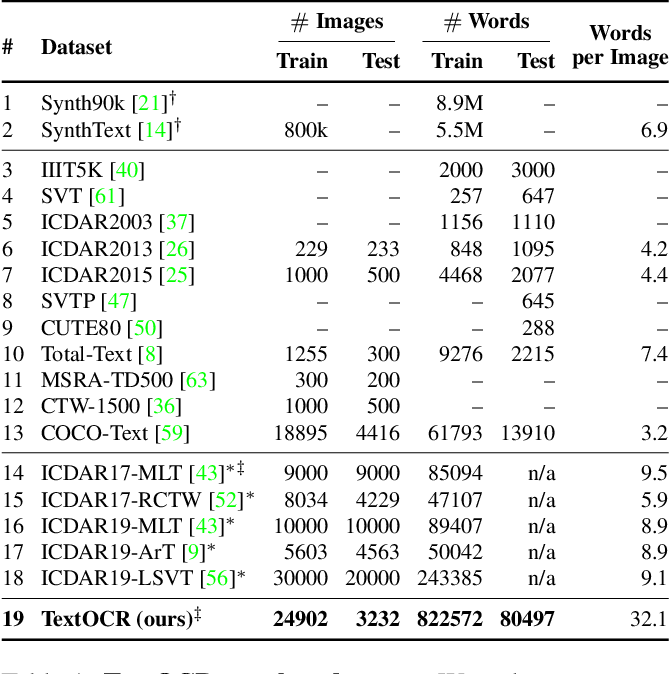 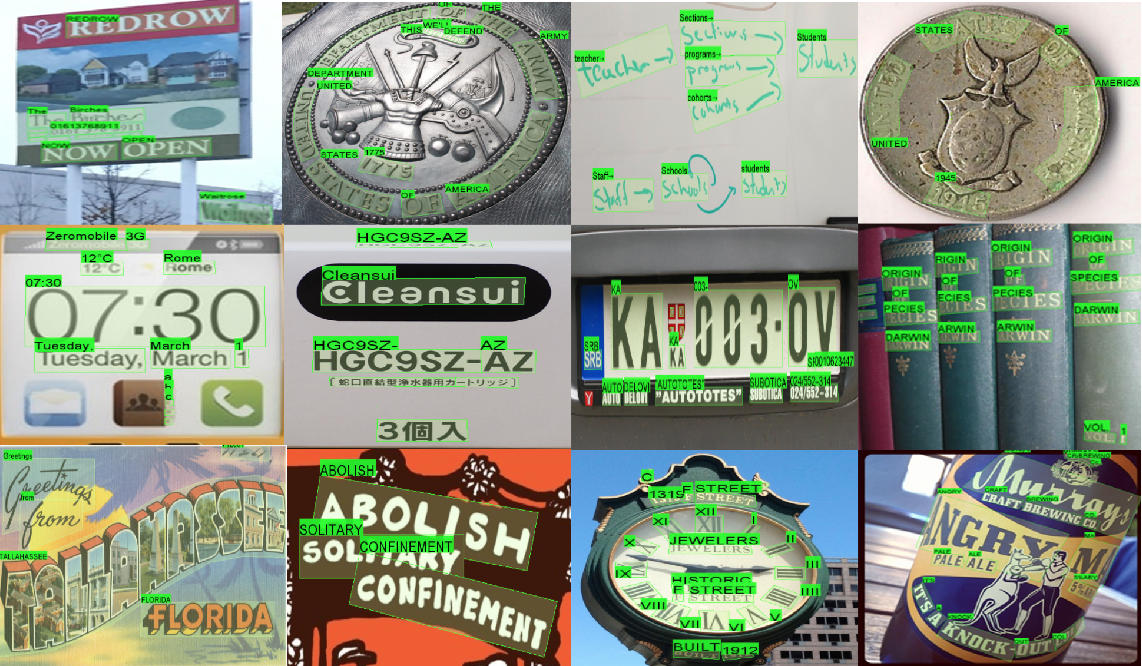 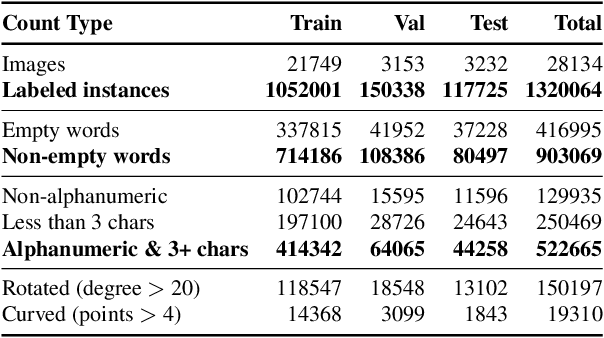 A crucial component for the scene text based reasoning required for TextVQA and TextCaps datasets involve detecting and recognizing text present in the images using an optical character recognition (OCR) system. The current systems are crippled by the unavailability of ground truth text annotations for these datasets as well as lack of scene text detection and recognition datasets on real images disallowing the progress in the field of OCR and evaluation of scene text based reasoning in isolation from OCR systems. In this work, we propose TextOCR, an arbitrary-shaped scene text detection and recognition with 900k annotated words collected on real images from TextVQA dataset. We show that current state-of-the-art text-recognition (OCR) models fail to perform well on TextOCR and that training on TextOCR helps achieve state-of-the-art performance on multiple other OCR datasets as well. We use a TextOCR trained OCR model to create PixelM4C model which can do scene text based reasoning on an image in an end-to-end fashion, allowing us to revisit several design choices to achieve new state-of-the-art performance on TextVQA dataset. 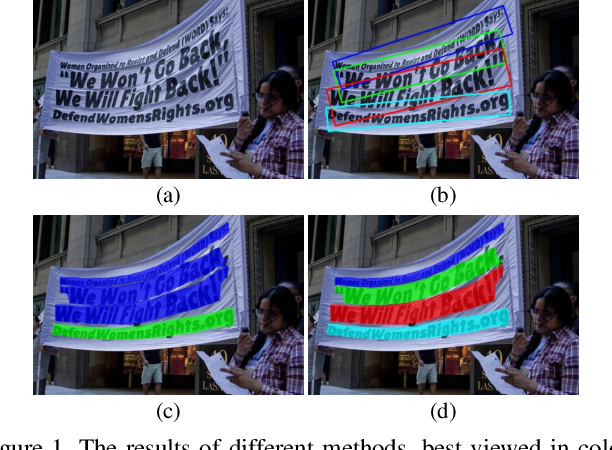 The challenges of shape robust text detection lie in two aspects: 1) most existing quadrangular bounding box based detectors are difficult to locate texts with arbitrary shapes, which are hard to be enclosed perfectly in a rectangle; 2) most pixel-wise segmentation-based detectors may not separate the text instances that are very close to each other. To address these problems, we propose a novel Progressive Scale Expansion Network (PSENet), designed as a segmentation-based detector with multiple predictions for each text instance. These predictions correspond to different `kernels' produced by shrinking the original text instance into various scales. Consequently, the final detection can be conducted through our progressive scale expansion algorithm which gradually expands the kernels with minimal scales to the text instances with maximal and complete shapes. Due to the fact that there are large geometrical margins among these minimal kernels, our method is effective to distinguish the adjacent text instances and is robust to arbitrary shapes. The state-of-the-art results on ICDAR 2015 and ICDAR 2017 MLT benchmarks further confirm the great effectiveness of PSENet. Notably, PSENet outperforms the previous best record by absolute 6.37\% on the curve text dataset SCUT-CTW1500. Code will be available in https://github.com/whai362/PSENet. 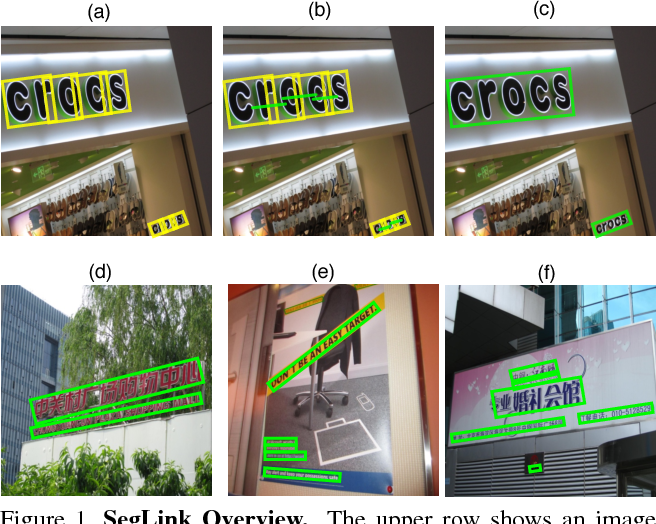 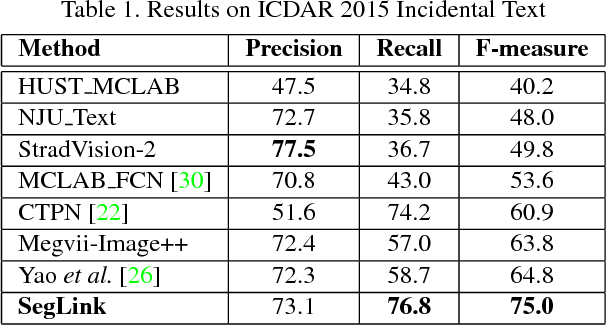 Most state-of-the-art text detection methods are specific to horizontal Latin text and are not fast enough for real-time applications. We introduce Segment Linking (SegLink), an oriented text detection method. The main idea is to decompose text into two locally detectable elements, namely segments and links. A segment is an oriented box covering a part of a word or text line; A link connects two adjacent segments, indicating that they belong to the same word or text line. Both elements are detected densely at multiple scales by an end-to-end trained, fully-convolutional neural network. Final detections are produced by combining segments connected by links. Compared with previous methods, SegLink improves along the dimensions of accuracy, speed, and ease of training. It achieves an f-measure of 75.0% on the standard ICDAR 2015 Incidental (Challenge 4) benchmark, outperforming the previous best by a large margin. It runs at over 20 FPS on 512x512 images. Moreover, without modification, SegLink is able to detect long lines of non-Latin text, such as Chinese.

The landscape of adversarial attacks against text classifiers continues to grow, with new attacks developed every year and many of them available in standard toolkits, such as TextAttack and OpenAttack. In response, there is a growing body of work on robust learning, which reduces vulnerability to these attacks, though sometimes at a high cost in compute time or accuracy. In this paper, we take an alternate approach -- we attempt to understand the attacker by analyzing adversarial text to determine which methods were used to create it. Our first contribution is an extensive dataset for attack detection and labeling: 1.5~million attack instances, generated by twelve adversarial attacks targeting three classifiers trained on six source datasets for sentiment analysis and abuse detection in English. As our second contribution, we use this dataset to develop and benchmark a number of classifiers for attack identification -- determining if a given text has been adversarially manipulated and by which attack. As a third contribution, we demonstrate the effectiveness of three classes of features for these tasks: text properties, capturing content and presentation of text; language model properties, determining which tokens are more or less probable throughout the input; and target model properties, representing how the text classifier is influenced by the attack, including internal node activations. Overall, this represents a first step towards forensics for adversarial attacks against text classifiers.

The goal of our paper is to semantically edit parts of an image to match a given text that describes desired attributes (e.g., texture, colour, and background), while preserving other contents that are irrelevant to the text. To achieve this, we propose a novel generative adversarial network (ManiGAN), which contains two key components: text-image affine combination module (ACM) and detail correction module (DCM). The ACM selects image regions relevant to the given text and then correlates the regions with corresponding semantic words for effective manipulation. Meanwhile, it encodes original image features to help reconstruct text-irrelevant contents. The DCM rectifies mismatched attributes and completes missing contents of the synthetic image. Finally, we suggest a new metric for evaluating image manipulation results, in terms of both the generation of new attributes and the reconstruction of text-irrelevant contents. Extensive experiments on the CUB and COCO datasets demonstrate the superior performance of the proposed method. 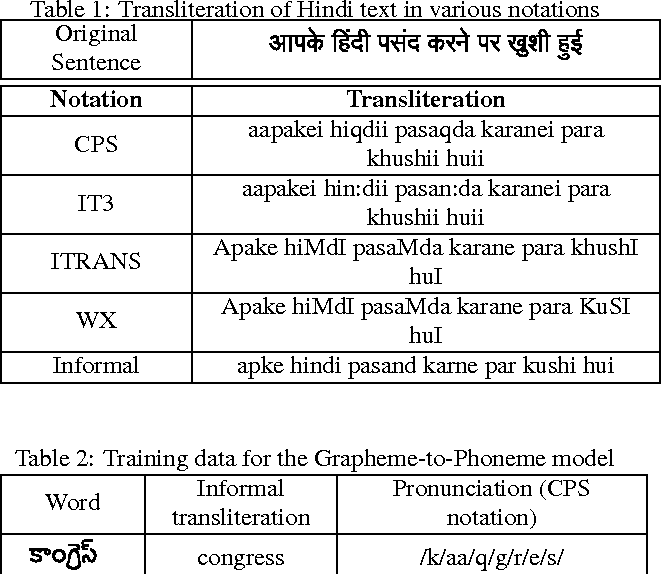 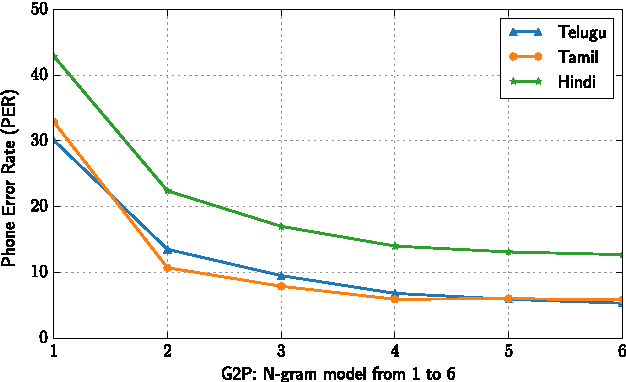 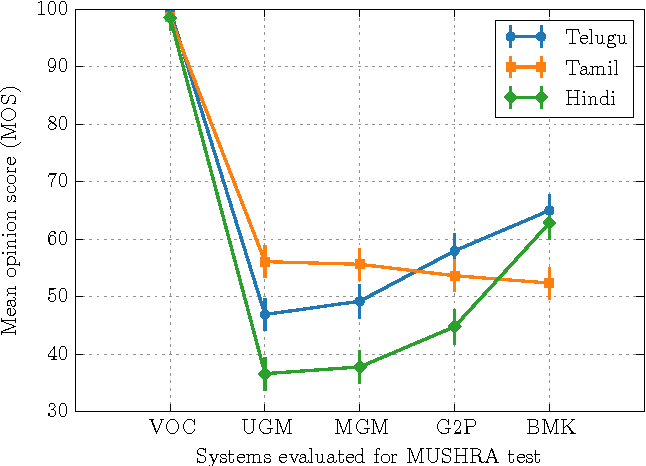 Text-to-Speech synthesis in Indian languages has a seen lot of progress over the decade partly due to the annual Blizzard challenges. These systems assume the text to be written in Devanagari or Dravidian scripts which are nearly phonemic orthography scripts. However, the most common form of computer interaction among Indians is ASCII written transliterated text. Such text is generally noisy with many variations in spelling for the same word. In this paper we evaluate three approaches to synthesize speech from such noisy ASCII text: a naive Uni-Grapheme approach, a Multi-Grapheme approach, and a supervised Grapheme-to-Phoneme (G2P) approach. These methods first convert the ASCII text to a phonetic script, and then learn a Deep Neural Network to synthesize speech from that. We train and test our models on Blizzard Challenge datasets that were transliterated to ASCII using crowdsourcing. Our experiments on Hindi, Tamil and Telugu demonstrate that our models generate speech of competetive quality from ASCII text compared to the speech synthesized from the native scripts. All the accompanying transliterated datasets are released for public access. 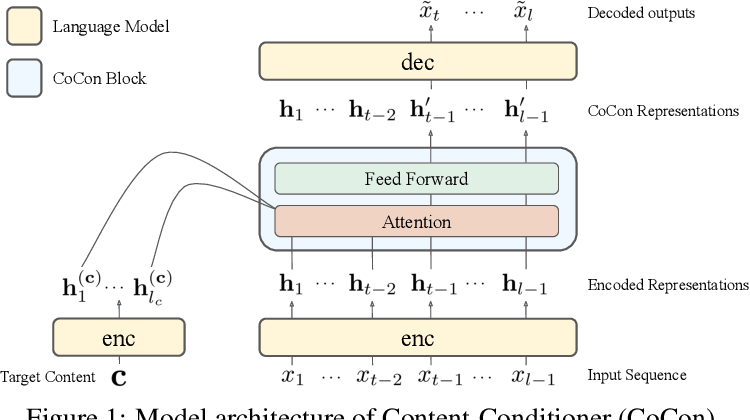 Pretrained Transformer-based language models (LMs) display remarkable natural language generation capabilities. With their immense potential, controlling text generation of such LMs is getting attention. While there are studies that seek to control high-level attributes (such as sentiment and topic) of generated text, there is still a lack of more precise control over its content at the word- and phrase-level. Here, we propose Content-Conditioner (CoCon) to control an LM's output text with a target content, at a fine-grained level. In our self-supervised approach, the CoCon block learns to help the LM complete a partially-observed text sequence by conditioning with content inputs that are withheld from the LM. Through experiments, we show that CoCon can naturally incorporate target content into generated texts and control high-level text attributes in a zero-shot manner. 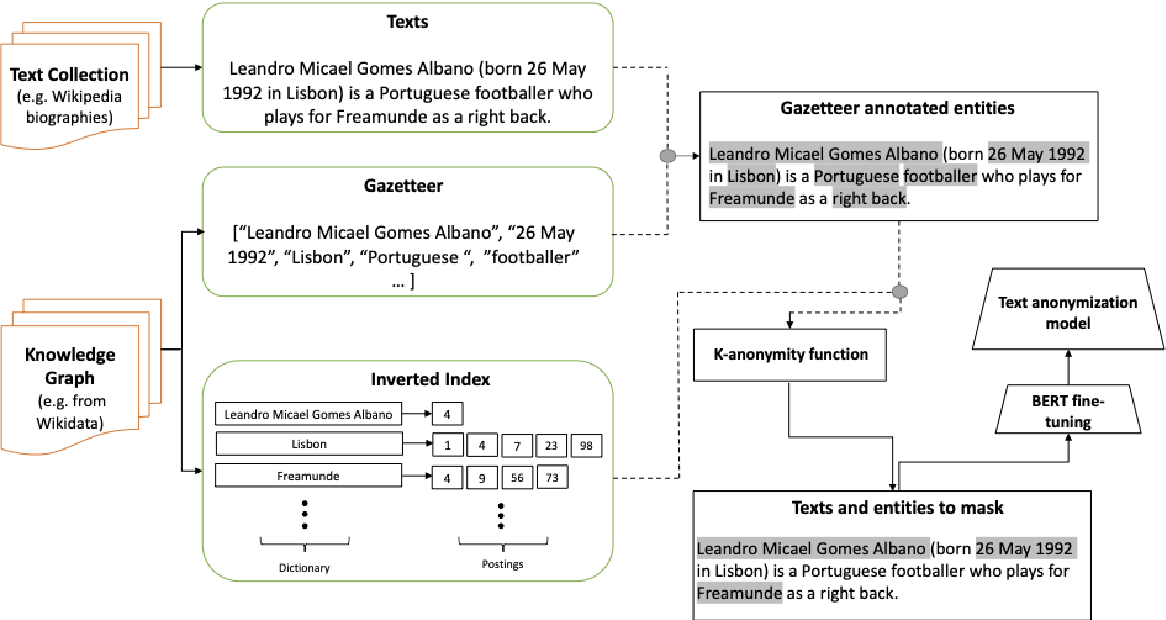 We propose a novel method to bootstrap text anonymization models based on distant supervision. Instead of requiring manually labeled training data, the approach relies on a knowledge graph expressing the background information assumed to be publicly available about various individuals. This knowledge graph is employed to automatically annotate text documents including personal data about a subset of those individuals. More precisely, the method determines which text spans ought to be masked in order to guarantee $k$-anonymity, assuming an adversary with access to both the text documents and the background information expressed in the knowledge graph. The resulting collection of labeled documents is then used as training data to fine-tune a pre-trained language model for text anonymization. We illustrate this approach using a knowledge graph extracted from Wikidata and short biographical texts from Wikipedia. Evaluation results with a RoBERTa-based model and a manually annotated collection of 553 summaries showcase the potential of the approach, but also unveil a number of issues that may arise if the knowledge graph is noisy or incomplete. The results also illustrate that, contrary to most sequence labeling problems, the text anonymization task may admit several alternative solutions. 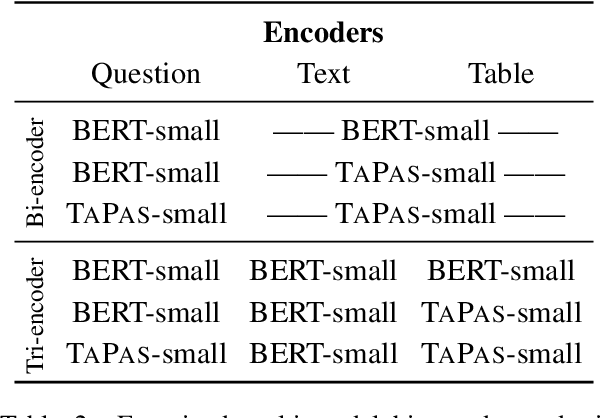 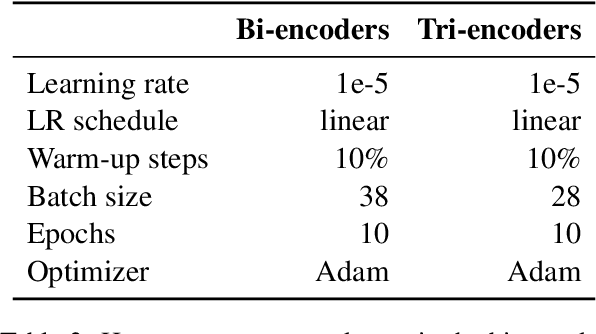 Open-domain extractive question answering works well on textual data by first retrieving candidate texts and then extracting the answer from those candidates. However, some questions cannot be answered by text alone but require information stored in tables. In this paper, we present an approach for retrieving both texts and tables relevant to a question by jointly encoding texts, tables and questions into a single vector space. To this end, we create a new multi-modal dataset based on text and table datasets from related work and compare the retrieval performance of different encoding schemata. We find that dense vector embeddings of transformer models outperform sparse embeddings on four out of six evaluation datasets. Comparing different dense embedding models, tri-encoders, with one encoder for each question, text and table, increase retrieval performance compared to bi-encoders with one encoder for the question and one for both text and tables. We release the newly created multi-modal dataset to the community so that it can be used for training and evaluation.

In this article we address the problem of text passage alignment across interlingual article pairs in Wikipedia. We develop methods that enable the identification and interlinking of text passages written in different languages and containing overlapping information. Interlingual text passage alignment can enable Wikipedia editors and readers to better understand language-specific context of entities, provide valuable insights in cultural differences and build a basis for qualitative analysis of the articles. An important challenge in this context is the trade-off between the granularity of the extracted text passages and the precision of the alignment. Whereas short text passages can result in more precise alignment, longer text passages can facilitate a better overview of the differences in an article pair. To better understand these aspects from the user perspective, we conduct a user study at the example of the German, Russian and the English Wikipedia and collect a user-annotated benchmark. Then we propose MultiWiki -- a method that adopts an integrated approach to the text passage alignment using semantic similarity measures and greedy algorithms and achieves precise results with respect to the user-defined alignment. MultiWiki demonstration is publicly available and currently supports four language pairs.