Today all kind of information is getting digitized and along with all this digitization, the huge archive of various kinds of documents is being digitized too. We know that, Optical Character Recognition is the method through which, newspapers and other paper documents convert into digital resources. But, it is a fact that this method works on texts only. As a result, if we try to process any document which contains non-textual zones, then we will get garbage texts as output. That is why; in order to digitize documents properly they should be prepossessed carefully. And while preprocessing, segmenting document in different regions according to the category properly is most important. But, the Optical Character Recognition processes available for Bangla language have no such algorithm that can categorize a newspaper/book page fully. So we worked to decompose a document into its several parts like headlines, sub headlines, columns, images etc. And if the input is skewed and rotated, then the input was also deskewed and de-rotated. To decompose any Bangla document we found out the edges of the input image. Then we find out the horizontal and vertical area of every pixel where it lies in. Later on the input image was cut according to these areas. Then we pick each and every sub image and found out their height-width ratio, line height. Then according to these values the sub images were categorized. To deskew the image we found out the skew angle and de skewed the image according to this angle. To de-rotate the image we used the line height, matra line, pixel ratio of matra line. 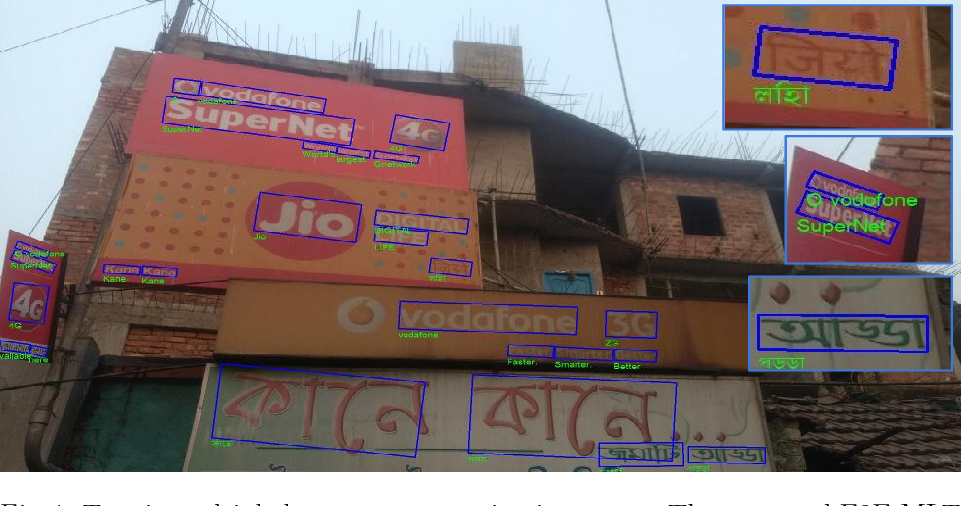 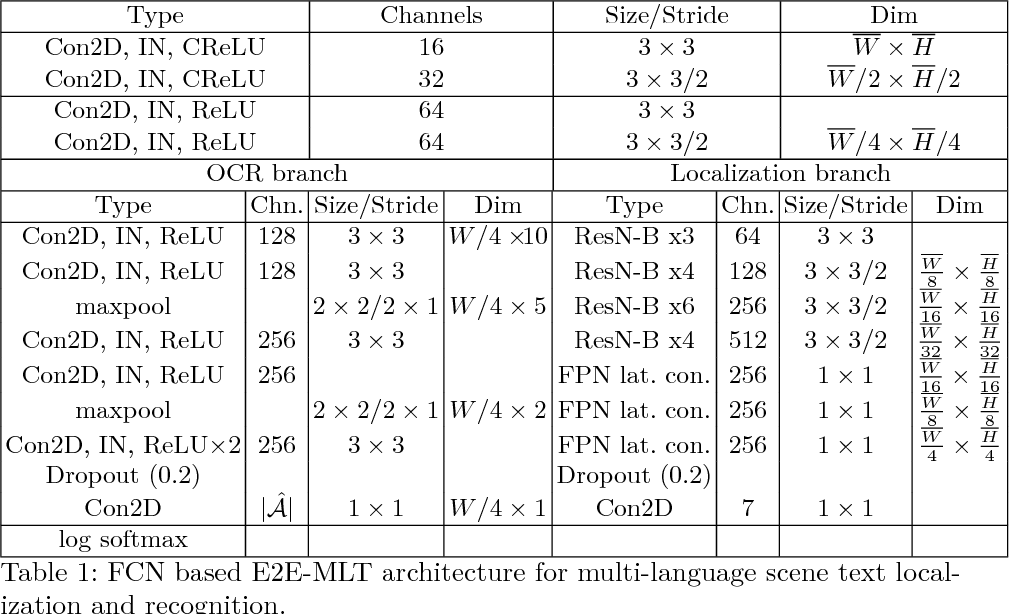 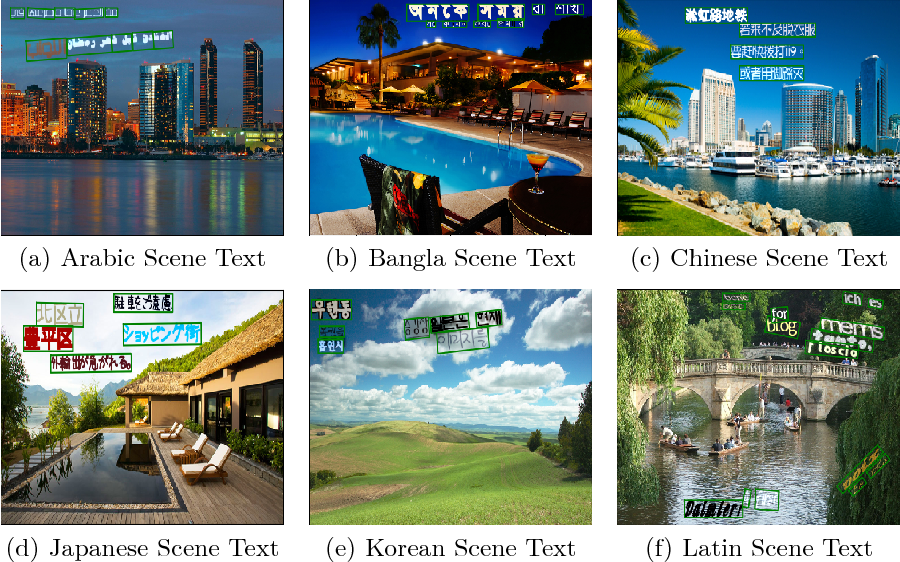 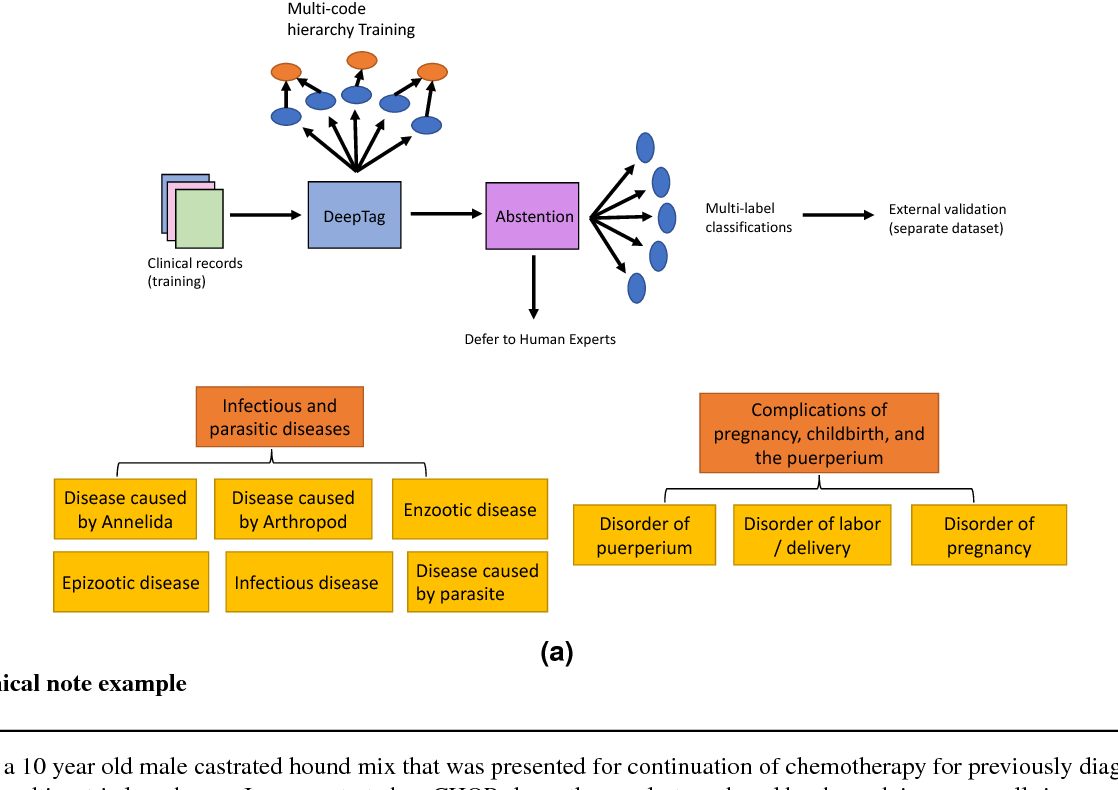 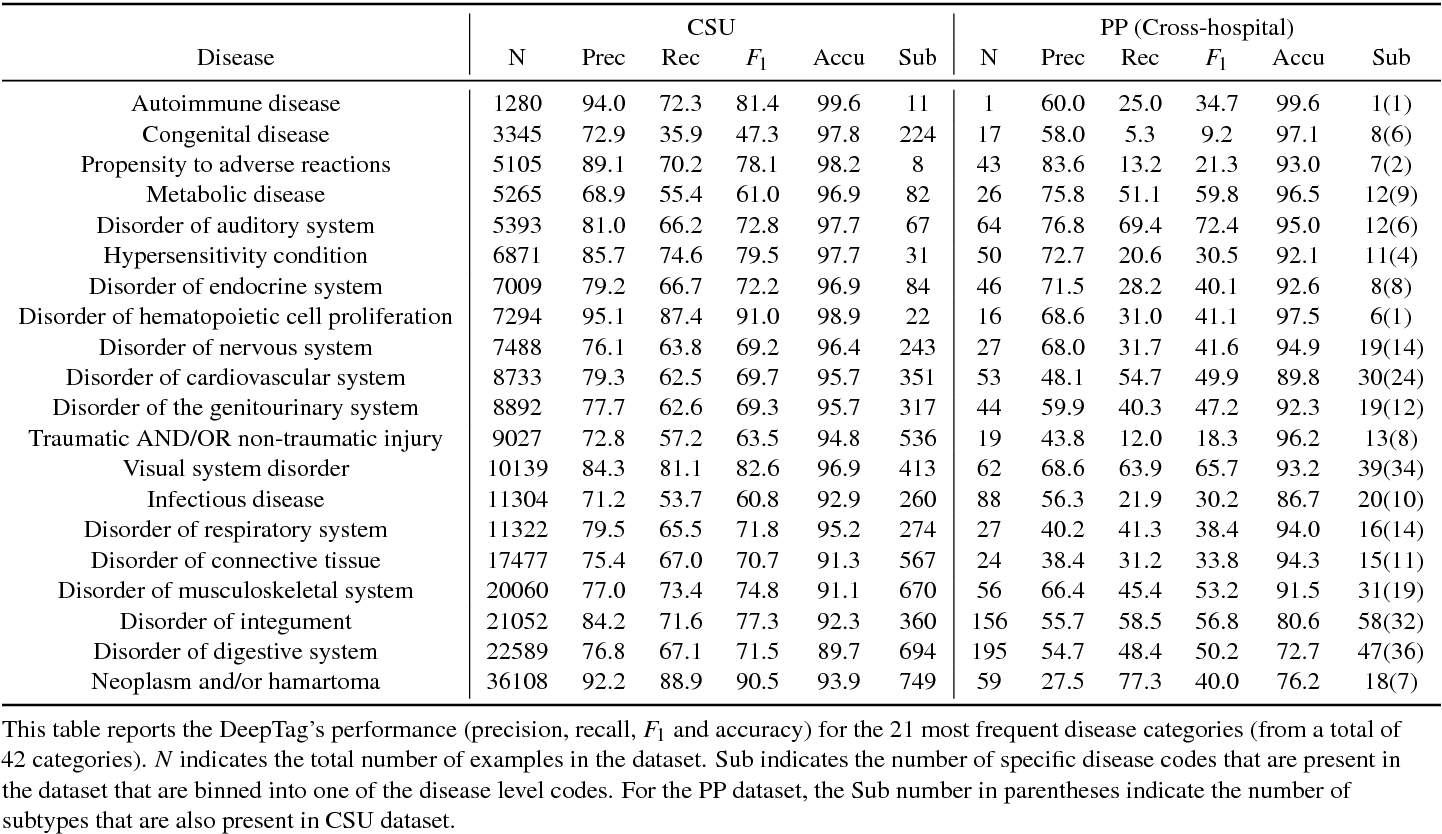 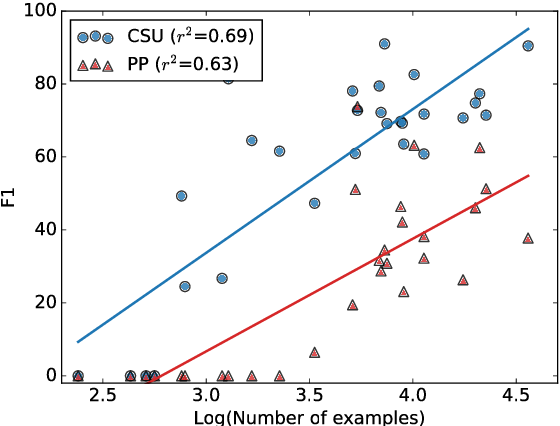 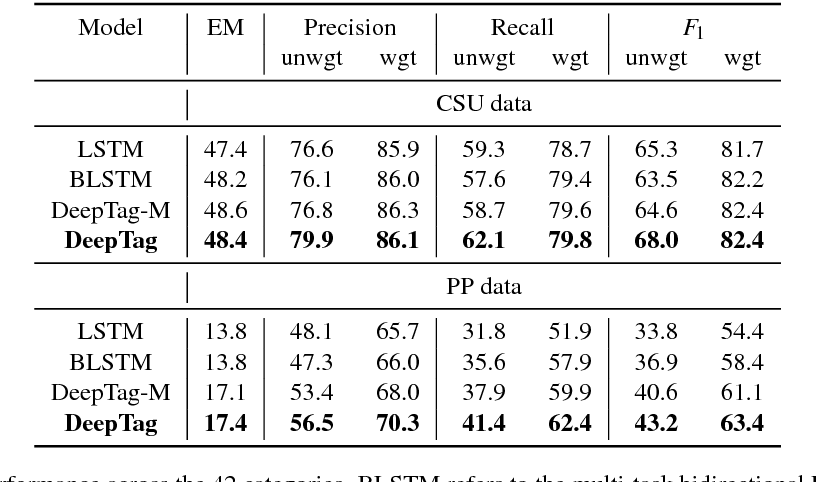 Large scale veterinary clinical records can become a powerful resource for patient care and research. However, clinicians lack the time and resource to annotate patient records with standard medical diagnostic codes and most veterinary visits are captured in free text notes. The lack of standard coding makes it challenging to use the clinical data to improve patient care. It is also a major impediment to cross-species translational research, which relies on the ability to accurately identify patient cohorts with specific diagnostic criteria in humans and animals. In order to reduce the coding burden for veterinary clinical practice and aid translational research, we have developed a deep learning algorithm, DeepTag, which automatically infers diagnostic codes from veterinary free text notes. DeepTag is trained on a newly curated dataset of 112,558 veterinary notes manually annotated by experts. DeepTag extends multi-task LSTM with an improved hierarchical objective that captures the semantic structures between diseases. To foster human-machine collaboration, DeepTag also learns to abstain in examples when it is uncertain and defers them to human experts, resulting in improved performance. DeepTag accurately infers disease codes from free text even in challenging cross-hospital settings where the text comes from different clinical settings than the ones used for training. It enables automated disease annotation across a broad range of clinical diagnoses with minimal pre-processing. The technical framework in this work can be applied in other medical domains that currently lack medical coding resources. 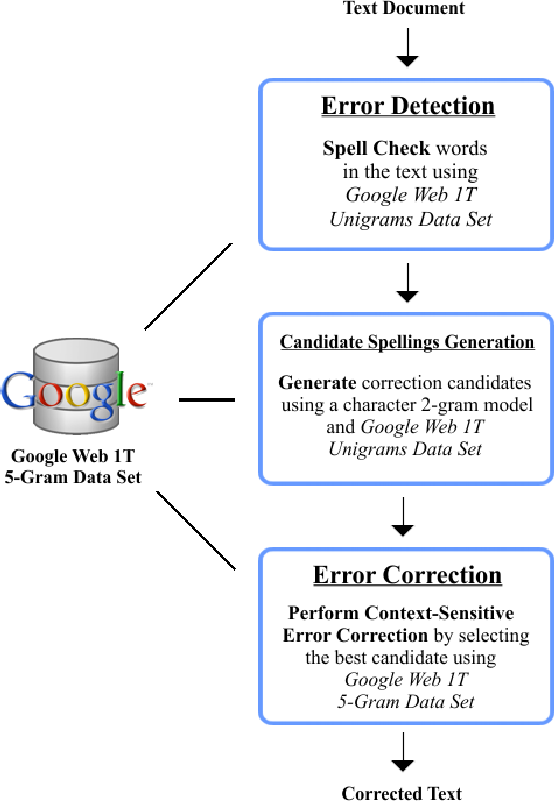 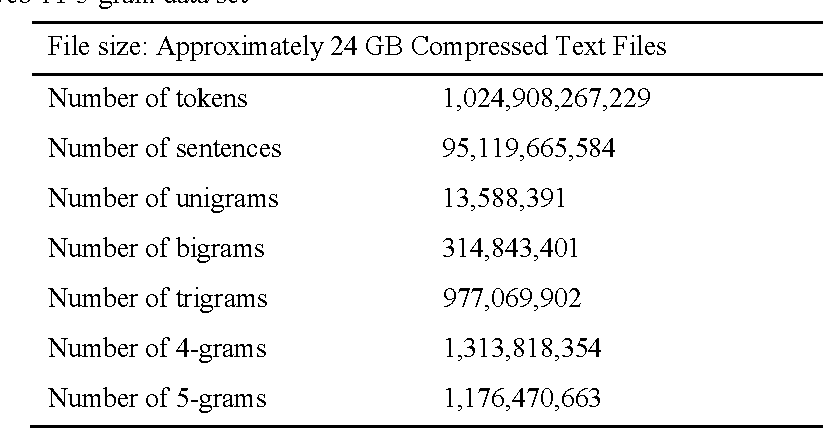 In computing, spell checking is the process of detecting and sometimes providing spelling suggestions for incorrectly spelled words in a text. Basically, a spell checker is a computer program that uses a dictionary of words to perform spell checking. The bigger the dictionary is, the higher is the error detection rate. The fact that spell checkers are based on regular dictionaries, they suffer from data sparseness problem as they cannot capture large vocabulary of words including proper names, domain-specific terms, technical jargons, special acronyms, and terminologies. As a result, they exhibit low error detection rate and often fail to catch major errors in the text. This paper proposes a new context-sensitive spelling correction method for detecting and correcting non-word and real-word errors in digital text documents. The approach hinges around data statistics from Google Web 1T 5-gram data set which consists of a big volume of n-gram word sequences, extracted from the World Wide Web. Fundamentally, the proposed method comprises an error detector that detects misspellings, a candidate spellings generator based on a character 2-gram model that generates correction suggestions, and an error corrector that performs contextual error correction. Experiments conducted on a set of text documents from different domains and containing misspellings, showed an outstanding spelling error correction rate and a drastic reduction of both non-word and real-word errors. In a further study, the proposed algorithm is to be parallelized so as to lower the computational cost of the error detection and correction processes. 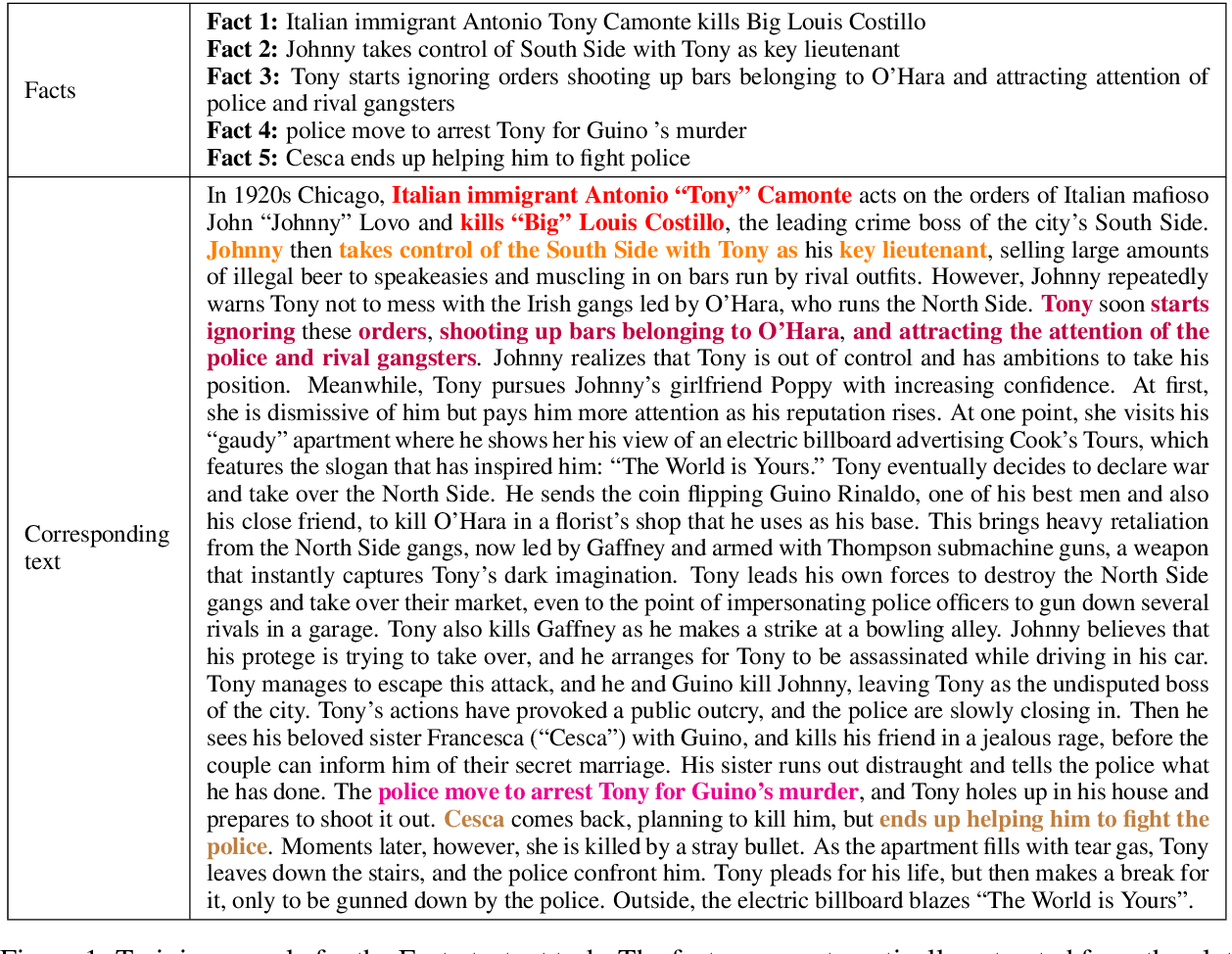 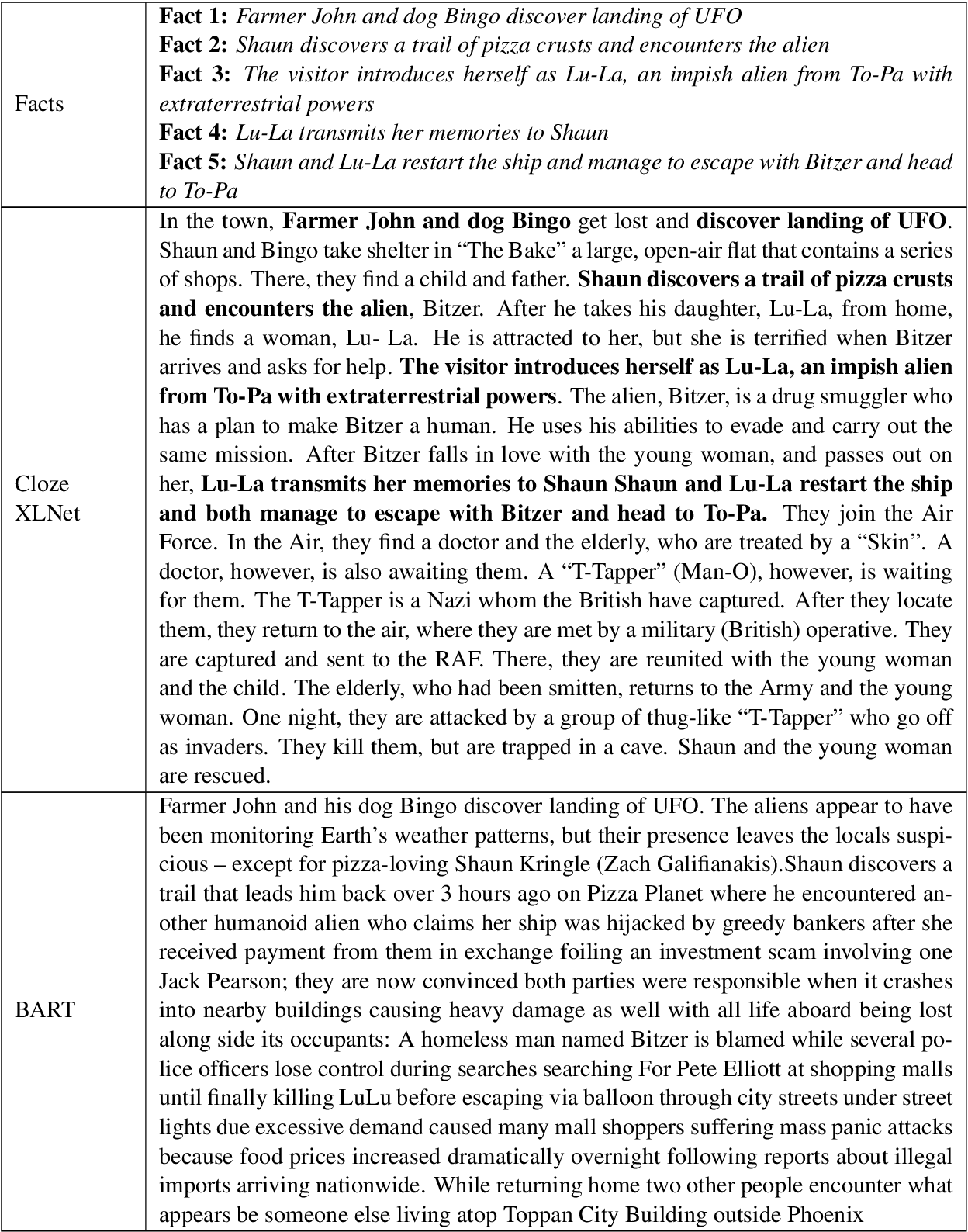 Recent advancements in self-attention neural network architectures have raised the bar for open-ended text generation. Yet, while current methods are capable of producing a coherent text which is several hundred words long, attaining control over the content that is being generated -- as well as evaluating it -- are still open questions. We propose a controlled generation task which is based on expanding a sequence of facts, expressed in natural language, into a longer narrative. We introduce human-based evaluation metrics for this task, as well as a method for deriving a large training dataset. We evaluate three methods on this task, based on fine-tuning pre-trained models. We show that while auto-regressive, unidirectional Language Models such as GPT2 produce better fluency, they struggle to adhere to the requested facts. We propose a plan-and-cloze model (using fine-tuned XLNet) which produces competitive fluency while adhering to the requested content. 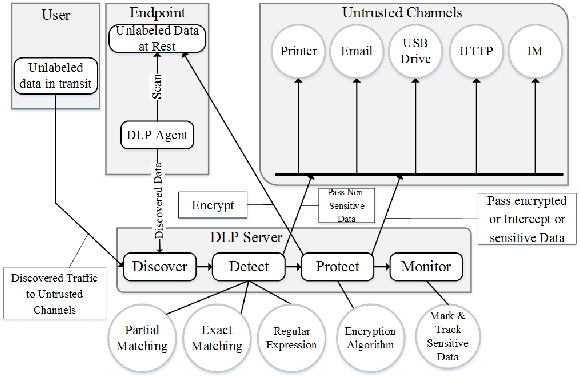 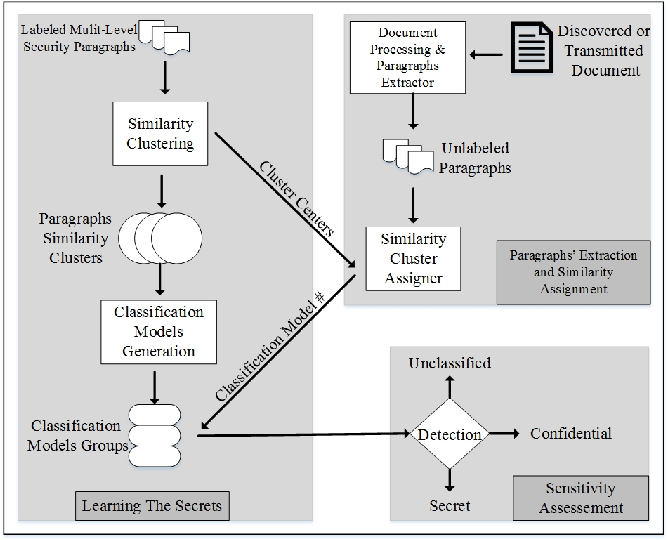 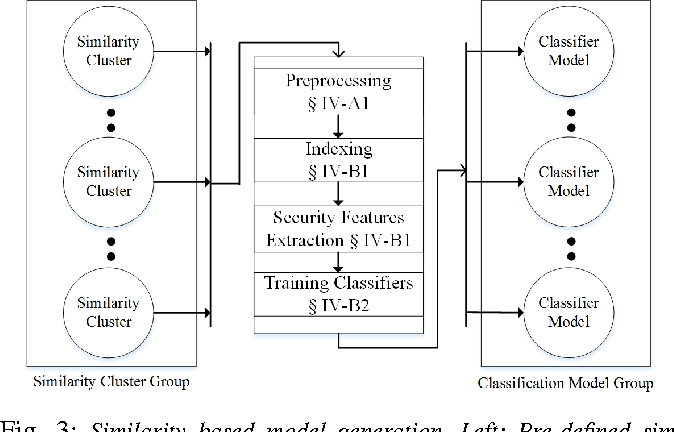 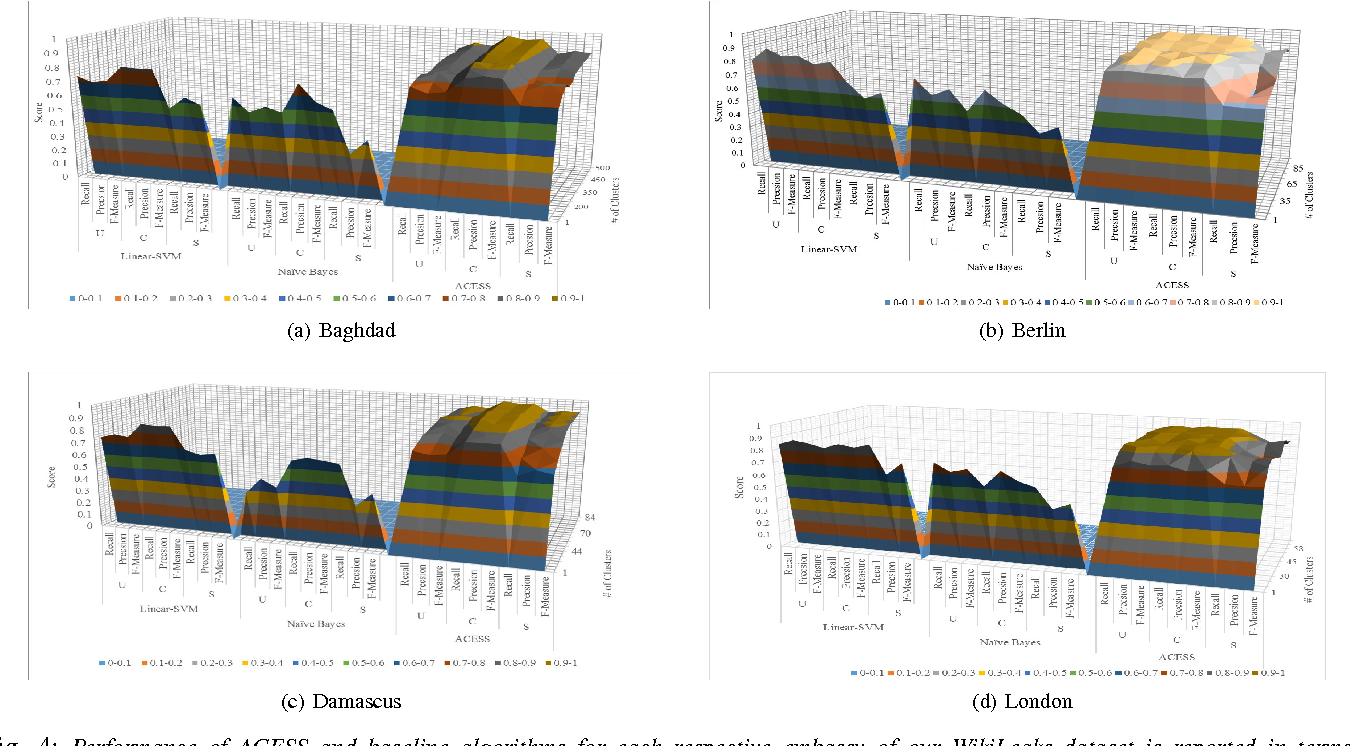 In recent years, traditional cybersecurity safeguards have proven ineffective against insider threats. Famous cases of sensitive information leaks caused by insiders, including the WikiLeaks release of diplomatic cables and the Edward Snowden incident, have greatly harmed the U.S. government's relationship with other governments and with its own citizens. Data Leak Prevention (DLP) is a solution for detecting and preventing information leaks from within an organization's network. However, state-of-art DLP detection models are only able to detect very limited types of sensitive information, and research in the field has been hindered due to the lack of available sensitive texts. Many researchers have focused on document-based detection with artificially labeled "confidential documents" for which security labels are assigned to the entire document, when in reality only a portion of the document is sensitive. This type of whole-document based security labeling increases the chances of preventing authorized users from accessing non-sensitive information within sensitive documents. In this paper, we introduce Automated Classification Enabled by Security Similarity (ACESS), a new and innovative detection model that penetrates the complexity of big text security classification/detection. To analyze the ACESS system, we constructed a novel dataset, containing formerly classified paragraphs from diplomatic cables made public by the WikiLeaks organization. To our knowledge this paper is the first to analyze a dataset that contains actual formerly sensitive information annotated at paragraph granularity. 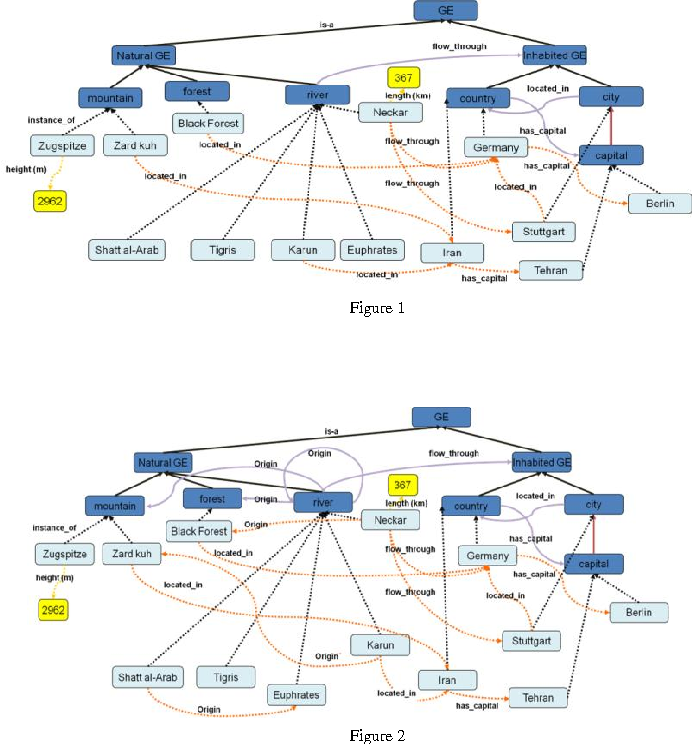 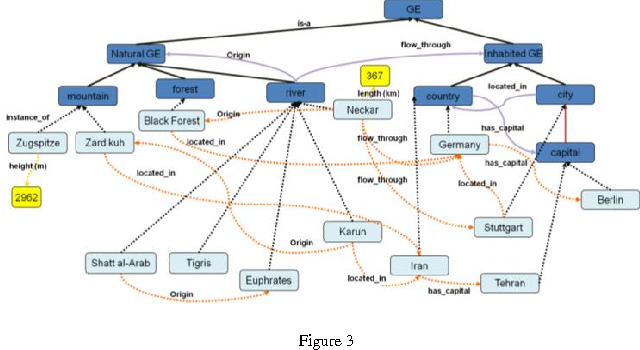 In this position paper we present a new approach for discovering some special classes of assertional knowledge in the text by using large RDF repositories, resulting in the extraction of new non-taxonomic ontological relations. Also we use inductive reasoning beside our approach to make it outperform. Then, we prepare a case study by applying our approach on sample data and illustrate the soundness of our proposed approach. Moreover in our point of view current LOD cloud is not a suitable base for our proposal in all informational domains. Therefore we figure out some directions based on prior works to enrich datasets of Linked Data by using web mining. The result of such enrichment can be reused for further relation extraction and ontology enrichment from unstructured free text documents.

Expedition: A System for the Unsupervised Learning of a Hierarchy of Concepts 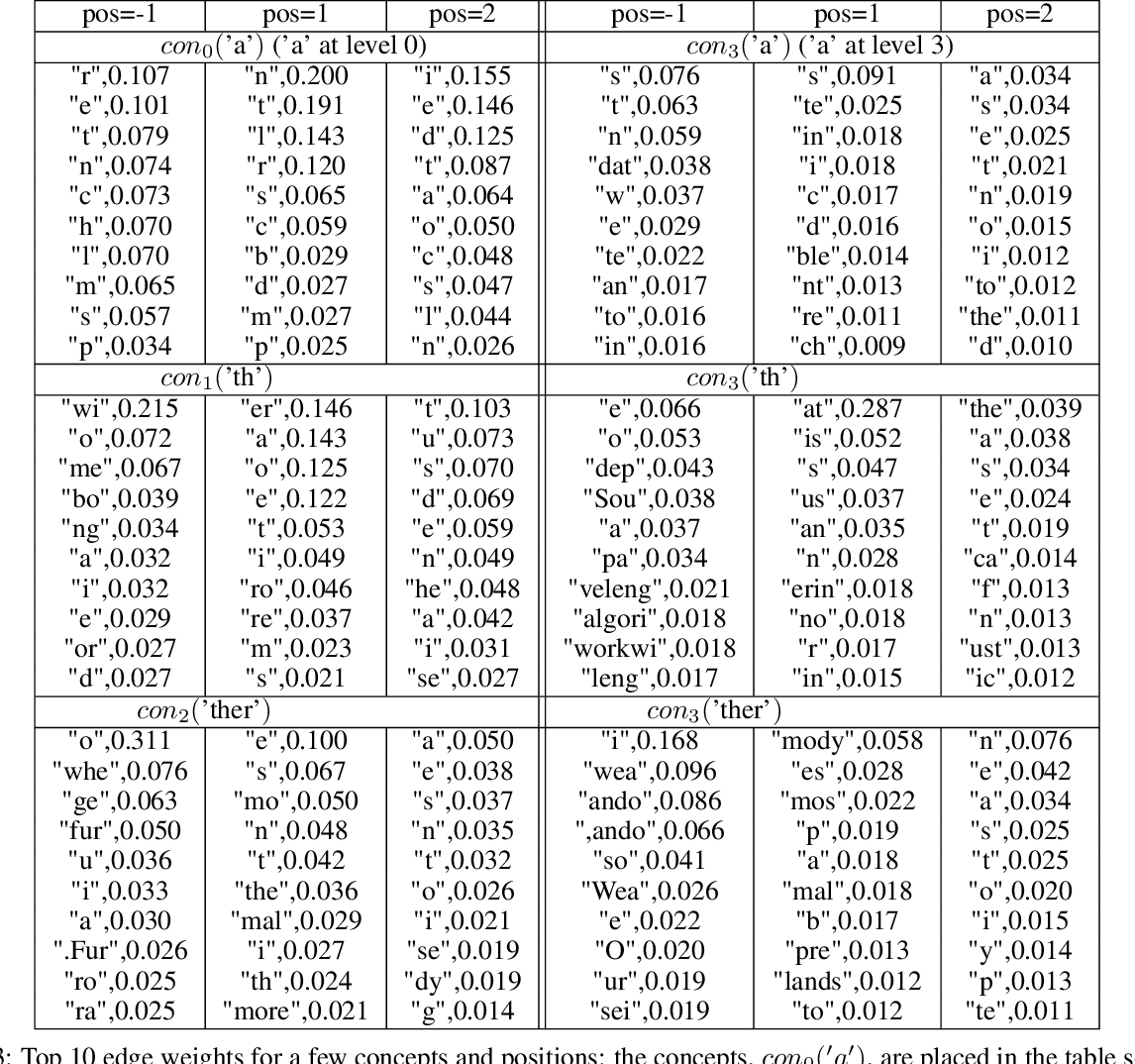 We present a system for bottom-up cumulative learning of myriad concepts corresponding to meaningful character strings, and their part-related and prediction edges. The learning is self-supervised in that the concepts discovered are used as predictors as well as targets of prediction. We devise an objective for segmenting with the learned concepts, derived from comparing to a baseline prediction system, that promotes making and using larger concepts, which in turn allows for predicting larger spans of text, and we describe a simple technique to promote exploration, i.e. trying out newly generated concepts in the segmentation process. We motivate and explain a layering of the concepts, to help separate the (conditional) distributions learnt among concepts. The layering of the concepts roughly corresponds to a part-whole concept hierarchy. With rudimentary segmentation and learning algorithms, the system is promising in that it acquires many concepts (tens of thousands in our small-scale experiments), and it learns to segment text well: when fed with English text with spaces removed, starting at the character level, much of what is learned respects word or phrase boundaries, and over time the average number of "bad" splits within segmentations, i.e. splits inside words, decreases as larger concepts are discovered and the system learns when to use them during segmentation. We report on promising experiments when the input text is converted to binary and the system begins with only two concepts, "0" and "1". The system is transparent, in the sense that it is easy to tell what the concepts learned correspond to, and which ones are active in a segmentation, or how the system "sees" its input. We expect this framework to be extensible and we discuss the current limitations and a number of directions for enhancing the learning and inference capabilities. 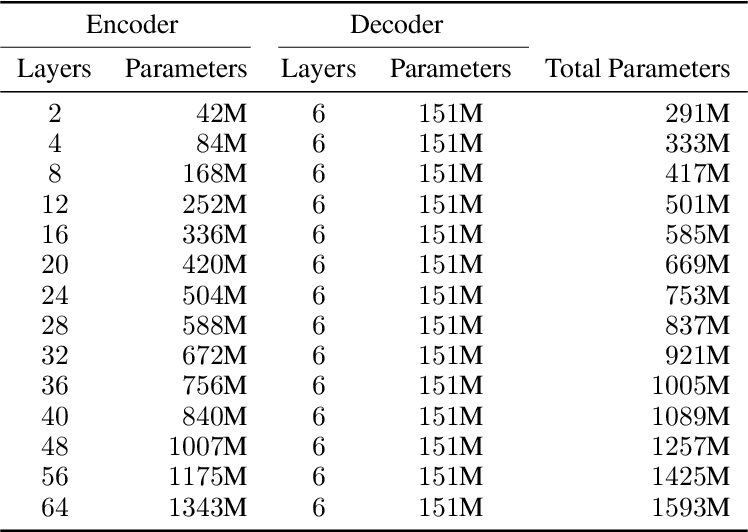 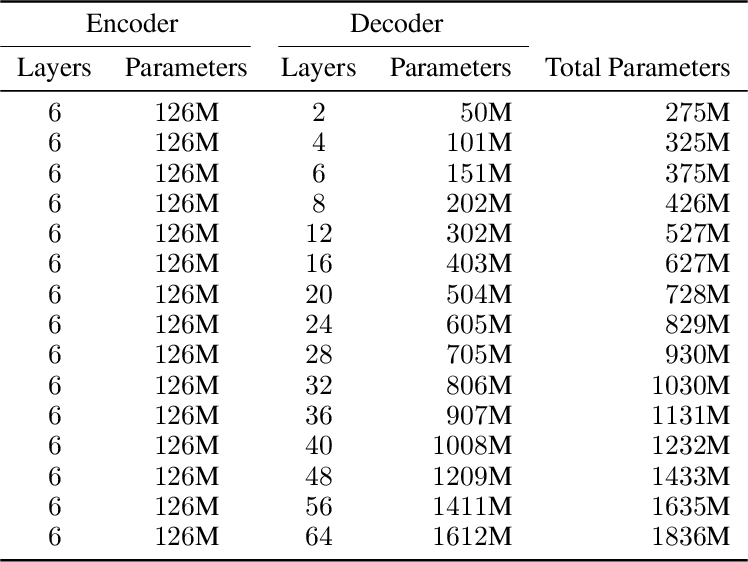 We present an empirical study of scaling properties of encoder-decoder Transformer models used in neural machine translation (NMT). We show that cross-entropy loss as a function of model size follows a certain scaling law. Specifically (i) We propose a formula which describes the scaling behavior of cross-entropy loss as a bivariate function of encoder and decoder size, and show that it gives accurate predictions under a variety of scaling approaches and languages; we show that the total number of parameters alone is not sufficient for such purposes. (ii) We observe different power law exponents when scaling the decoder vs scaling the encoder, and provide recommendations for optimal allocation of encoder/decoder capacity based on this observation. (iii) We also report that the scaling behavior of the model is acutely influenced by composition bias of the train/test sets, which we define as any deviation from naturally generated text (either via machine generated or human translated text). We observe that natural text on the target side enjoys scaling, which manifests as successful reduction of the cross-entropy loss. (iv) Finally, we investigate the relationship between the cross-entropy loss and the quality of the generated translations. We find two different behaviors, depending on the nature of the test data. For test sets which were originally translated from target language to source language, both loss and BLEU score improve as model size increases. In contrast, for test sets originally translated from source language to target language, the loss improves, but the BLEU score stops improving after a certain threshold. We release generated text from all models used in this study. 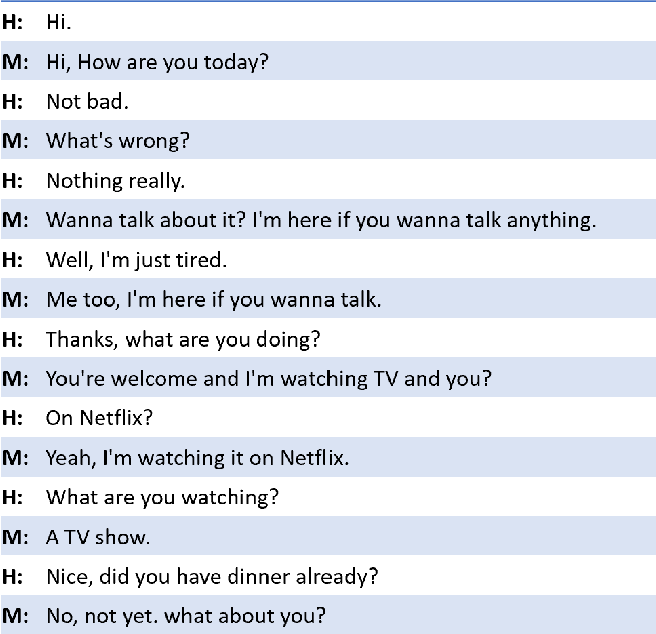 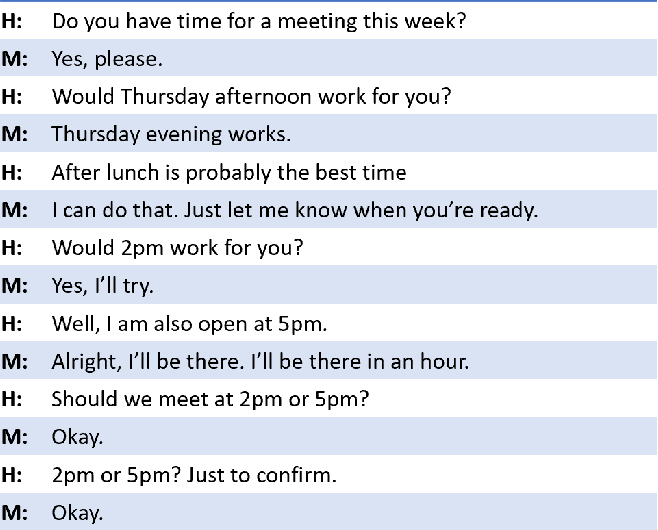 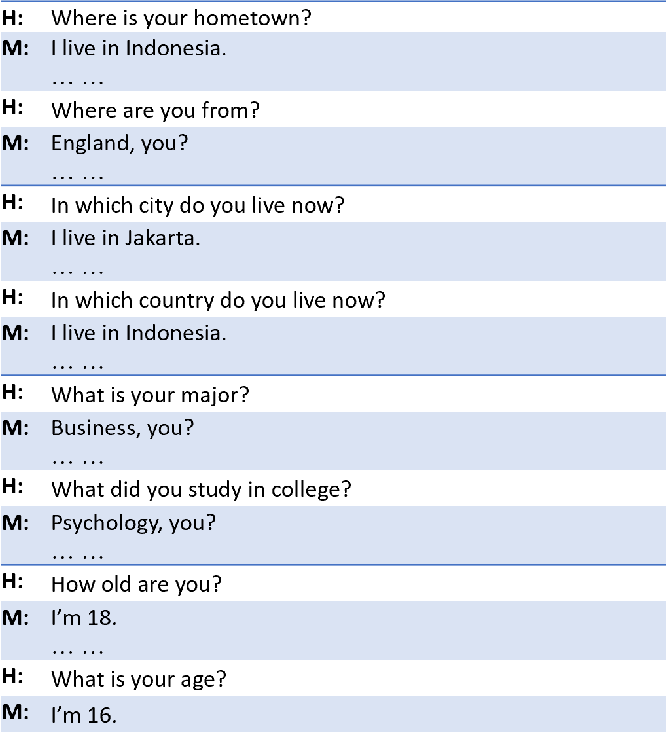 This article presents a hybrid approach based on a Grounded Text Generation (GTG) model to building robust task bots at scale. GTG is a hybrid model which uses a large-scale Transformer neural network as its backbone, combined with symbol-manipulation modules for knowledge base inference and prior knowledge encoding, to generate responses grounded in dialog belief state and real-world knowledge for task completion. GTG is pre-trained on large amounts of raw text and human conversational data, and can be fine-tuned to complete a wide range of tasks. The hybrid approach and its variants are being developed simultaneously by multiple research teams. The primary results reported on task-oriented dialog benchmarks are very promising, demonstrating the big potential of this approach. This article provides an overview of this progress and discusses related methods and technologies that can be incorporated for building robust conversational AI systems.