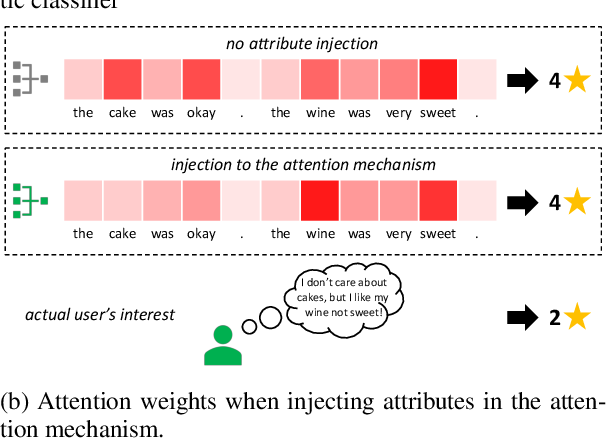 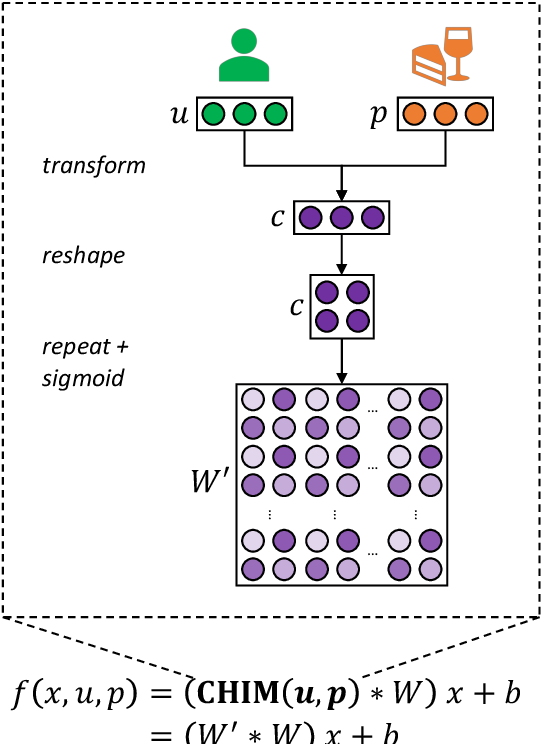 Text attributes, such as user and product information in product reviews, have been used to improve the performance of sentiment classification models. The de facto standard method is to incorporate them as additional biases in the attention mechanism, and more performance gains are achieved by extending the model architecture. In this paper, we show that the above method is the least effective way to represent and inject attributes. To demonstrate this hypothesis, unlike previous models with complicated architectures, we limit our base model to a simple BiLSTM with attention classifier, and instead focus on how and where the attributes should be incorporated in the model. We propose to represent attributes as chunk-wise importance weight matrices and consider four locations in the model (i.e., embedding, encoding, attention, classifier) to inject attributes. Experiments show that our proposed method achieves significant improvements over the standard approach and that attention mechanism is the worst location to inject attributes, contradicting prior work. We also outperform the state-of-the-art despite our use of a simple base model. Finally, we show that these representations transfer well to other tasks. Model implementation and datasets are released here: https://github.com/rktamplayo/CHIM.

A Generate-Validate Approach to Answering Questions about Qualitative Relationships 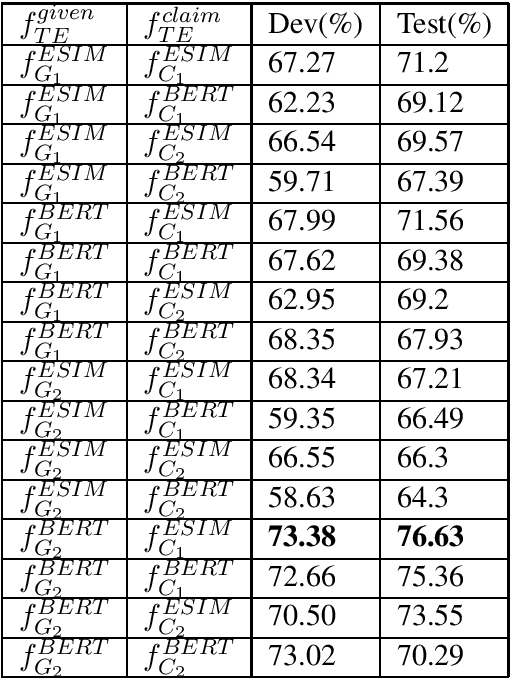 Qualitative relationships describe how increasing or decreasing one property (e.g. altitude) affects another (e.g. temperature). They are an important aspect of natural language question answering and are crucial for building chatbots or voice agents where one may enquire about qualitative relationships. Recently a dataset about question answering involving qualitative relationships has been proposed, and a few approaches to answer such questions have been explored, in the heart of which lies a semantic parser that converts the natural language input to a suitable logical form. A problem with existing semantic parsers is that they try to directly convert the input sentences to a logical form. Since the output language varies with each application, it forces the semantic parser to learn almost everything from scratch. In this paper, we show that instead of using a semantic parser to produce the logical form, if we apply the generate-validate framework i.e. generate a natural language description of the logical form and validate if the natural language description is followed from the input text, we get a better scope for transfer learning and our method outperforms the state-of-the-art by a large margin of 7.93%.

The emergence of online services in our daily lives has been accompanied by a range of malicious attempts to trick individuals into performing undesired actions, often to the benefit of the adversary. The most popular medium of these attempts is phishing attacks, particularly through emails and websites. In order to defend against such attacks, there is an urgent need for automated mechanisms to identify this malevolent content before it reaches users. Machine learning techniques have gradually become the standard for such classification problems. However, identifying common measurable features of phishing content (e.g., in emails) is notoriously difficult. To address this problem, we engage in a novel study into a phishing content classifier based on a recurrent neural network (RNN), which identifies such features without human input. At this stage, we scope our research to emails, but our approach can be extended to apply to websites. Our results show that the proposed system outperforms state-of-the-art tools. Furthermore, our classifier is efficient and takes into account only the text and, in particular, the textual structure of the email. Since these features are rarely considered in email classification, we argue that our classifier can complement existing classifiers with high information gain. 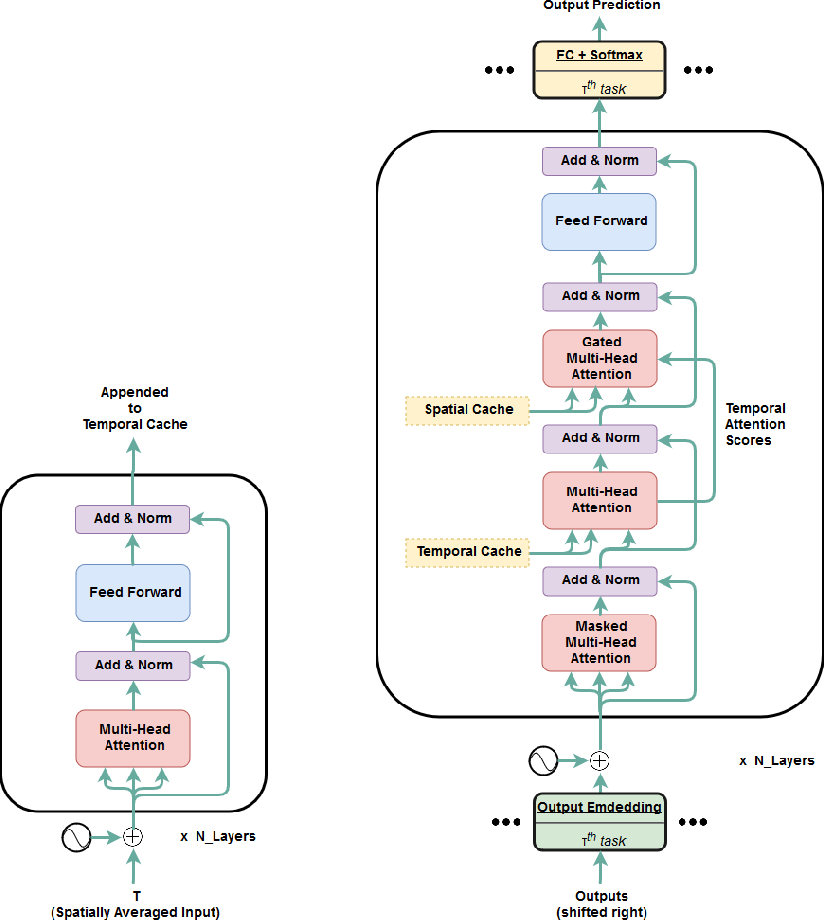 Transformer is a popularly used neural network architecture, especially for language understanding. We introduce an extended and unified architecture which can be used for tasks involving a variety of modalities like image, text, videos, etc. We propose a spatio-temporal cache mechanism that enables learning spatial dimension of the input in addition to the hidden states corresponding to the temporal input sequence. The proposed architecture further enables a single model to support tasks with multiple input modalities as well as asynchronous multi-task learning, thus we refer to it as OmniNet. For example, a single instance of OmniNet can concurrently learn to perform the tasks of part-of-speech tagging, image captioning, visual question answering and video activity recognition. We demonstrate that training these four tasks together results in about three times compressed model while retaining the performance in comparison to training them individually. We also show that using this neural network pre-trained on some modalities assists in learning an unseen task. This illustrates the generalization capacity of the self-attention mechanism on the spatio-temporal cache present in OmniNet. 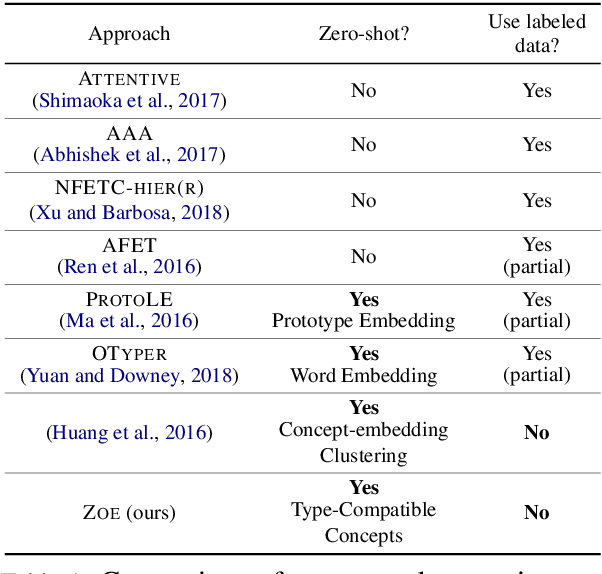 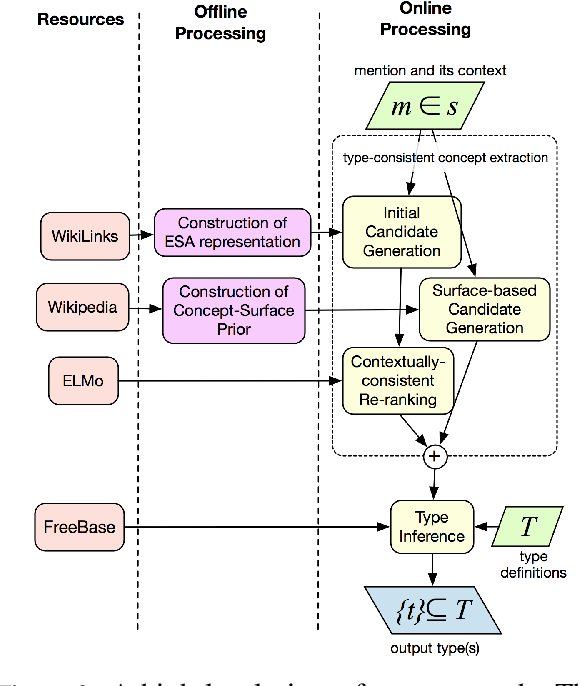 The problem of entity-typing has been studied predominantly in supervised learning fashion, mostly with task-specific annotations (for coarse types) and sometimes with distant supervision (for fine types). While such approaches have strong performance within datasets, they often lack the flexibility to transfer across text genres and to generalize to new type taxonomies. In this work we propose a zero-shot entity typing approach that requires no annotated data and can flexibly identify newly defined types. Given a type taxonomy defined as Boolean functions of FREEBASE "types", we ground a given mention to a set of type-compatible Wikipedia entries and then infer the target mention's types using an inference algorithm that makes use of the types of these entries. We evaluate our system on a broad range of datasets, including standard fine-grained and coarse-grained entity typing datasets, and also a dataset in the biological domain. Our system is shown to be competitive with state-of-the-art supervised NER systems and outperforms them on out-of-domain datasets. We also show that our system significantly outperforms other zero-shot fine typing systems. 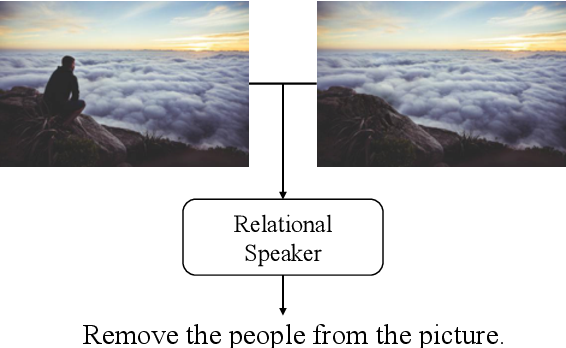 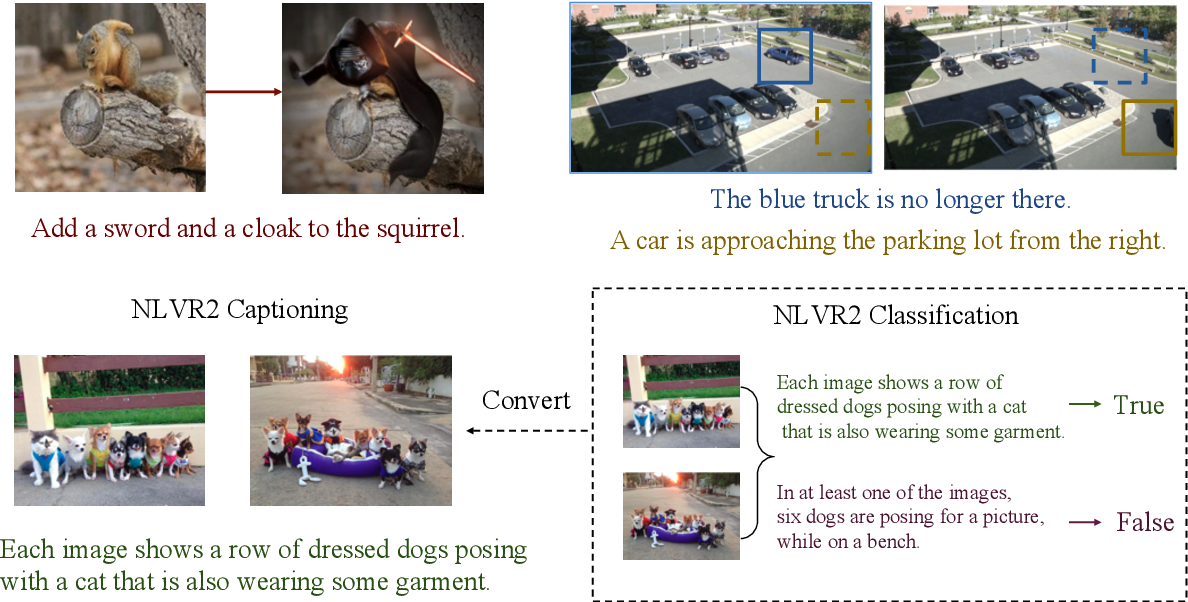 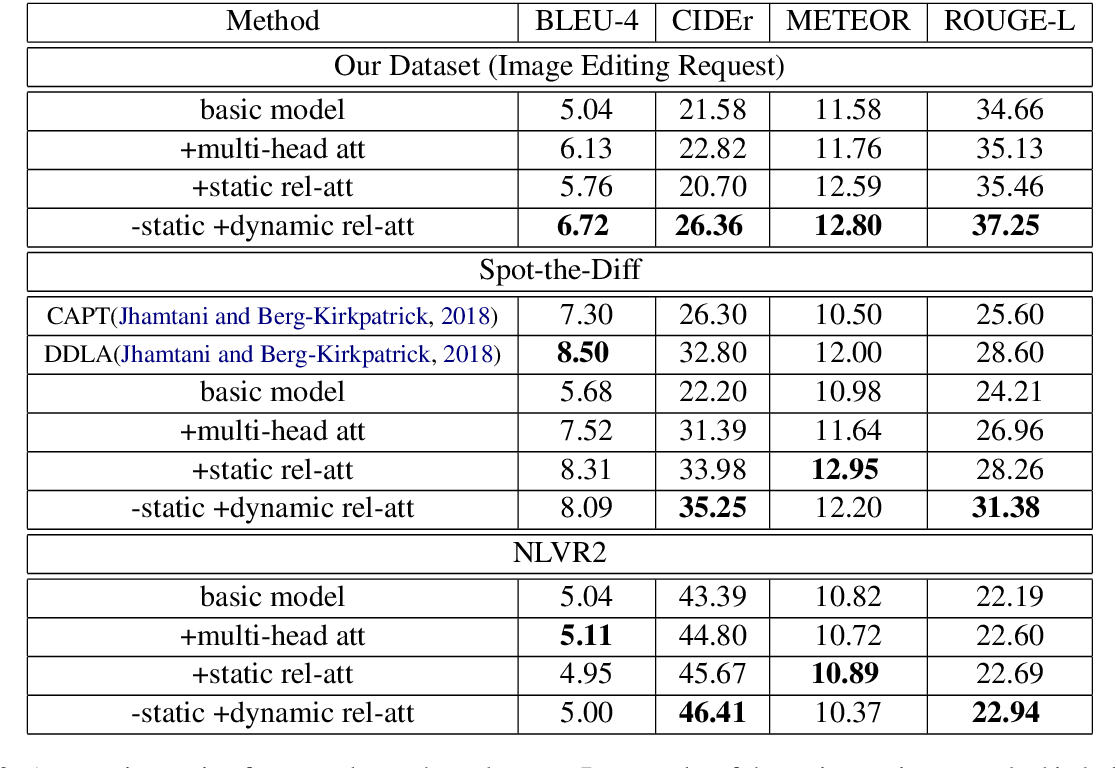 Describing images with text is a fundamental problem in vision-language research. Current studies in this domain mostly focus on single image captioning. However, in various real applications (e.g., image editing, difference interpretation, and retrieval), generating relational captions for two images, can also be very useful. This important problem has not been explored mostly due to lack of datasets and effective models. To push forward the research in this direction, we first introduce a new language-guided image editing dataset that contains a large number of real image pairs with corresponding editing instructions. We then propose a new relational speaker model based on an encoder-decoder architecture with static relational attention and sequential multi-head attention. We also extend the model with dynamic relational attention, which calculates visual alignment while decoding. Our models are evaluated on our newly collected and two public datasets consisting of image pairs annotated with relationship sentences. Experimental results, based on both automatic and human evaluation, demonstrate that our model outperforms all baselines and existing methods on all the datasets. 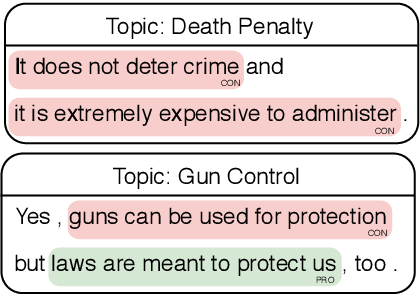 Argument mining is generally performed on the sentence-level -- it is assumed that an entire sentence (not parts of it) corresponds to an argument. In this paper, we introduce the new task of Argument unit Recognition and Classification (ARC). In ARC, an argument is generally a part of a sentence -- a more realistic assumption since several different arguments can occur in one sentence and longer sentences often contain a mix of argumentative and non-argumentative parts. Recognizing and classifying the spans that correspond to arguments makes ARC harder than previously defined argument mining tasks. We release ARC-8, a new benchmark for evaluating the ARC task. We show that token-level annotations for argument units can be gathered using scalable methods. ARC-8 contains 25\% more arguments than a dataset annotated on the sentence-level would. We cast ARC as a sequence labeling task, develop a number of methods for ARC sequence tagging and establish the state of the art for ARC-8. A focus of our work is robustness: both robustness against errors in sentence identification (which are frequent for noisy text) and robustness against divergence in training and test data. 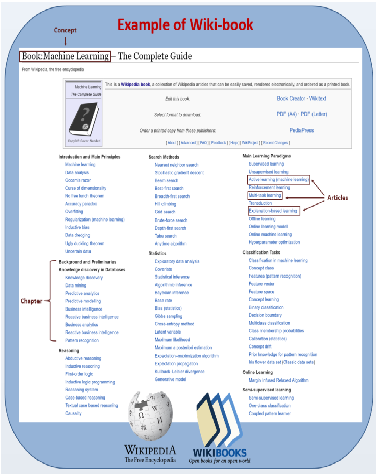 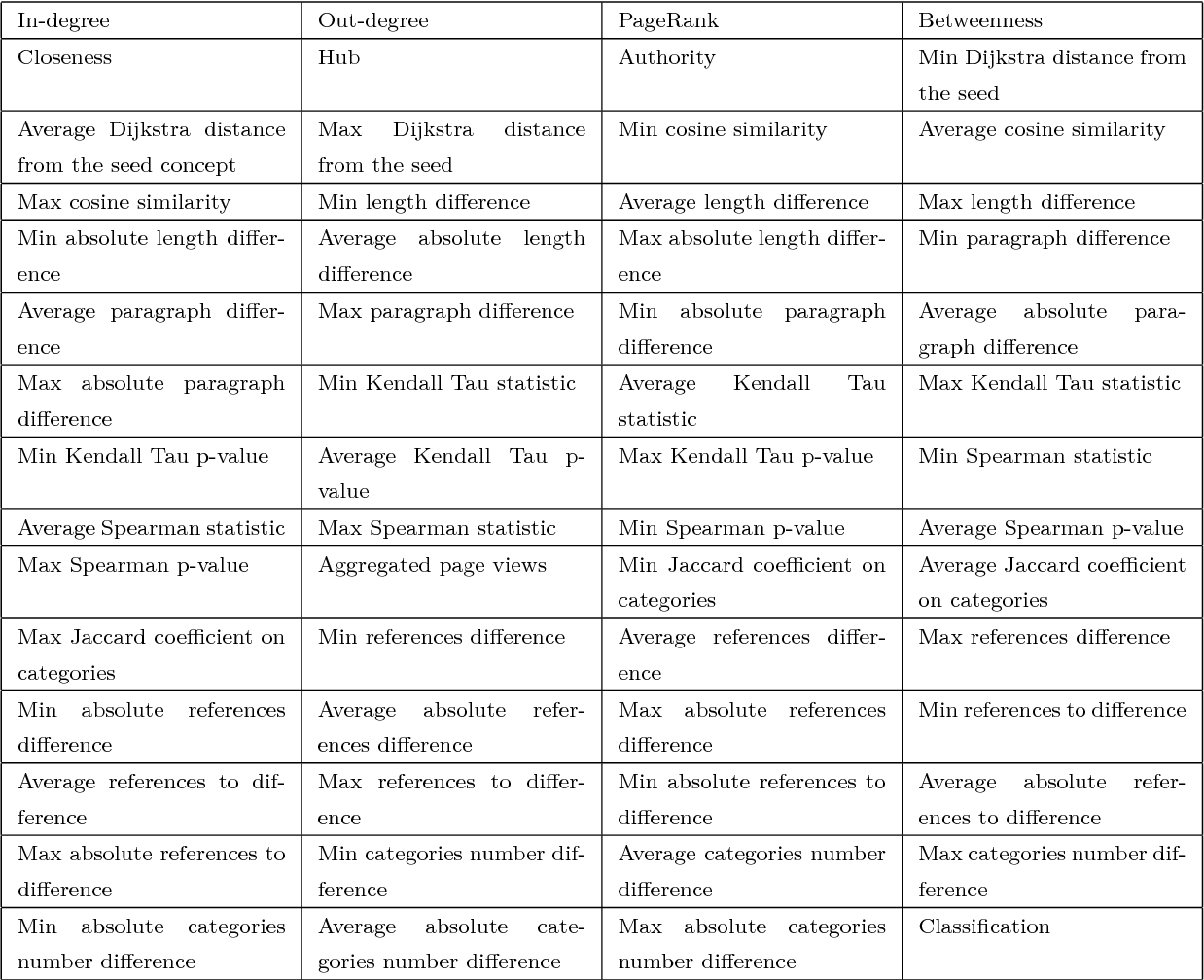 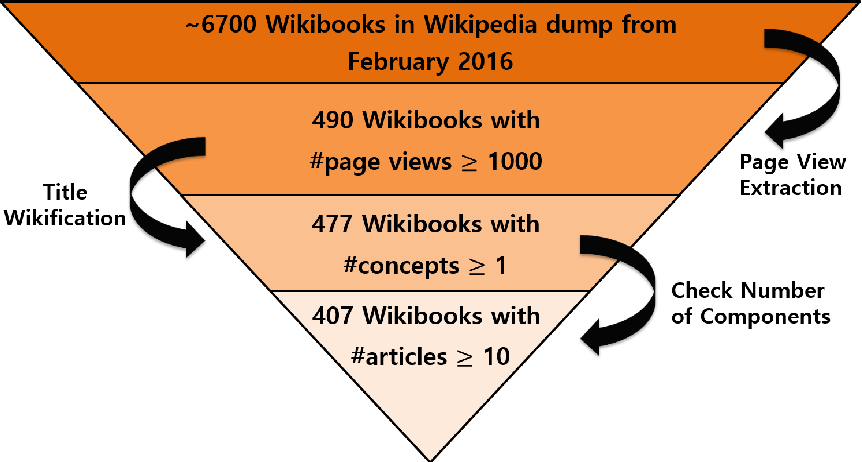 A Wikipedia book (known as Wikibook) is a collection of Wikipedia articles on a particular theme that is organized as a book. We propose Wikibook-Bot, a machine-learning based technique for automatically generating high quality Wikibooks based on a concept provided by the user. In order to create the Wikibook we apply machine learning algorithms to the different steps of the proposed technique. Firs, we need to decide whether an article belongs to a specific Wikibook - a classification task. Then, we need to divide the chosen articles into chapters - a clustering task - and finally, we deal with the ordering task which includes two subtasks: order articles within each chapter and order the chapters themselves. We propose a set of structural, text-based and unique Wikipedia features, and we show that by using these features, a machine learning classifier can successfully address the above challenges. The predictive performance of the proposed method is evaluated by comparing the auto-generated books to existing 407 Wikibooks which were manually generated by humans. For all the tasks we were able to obtain high and statistically significant results when comparing the Wikibook-bot books to books that were manually generated by Wikipedia contributors 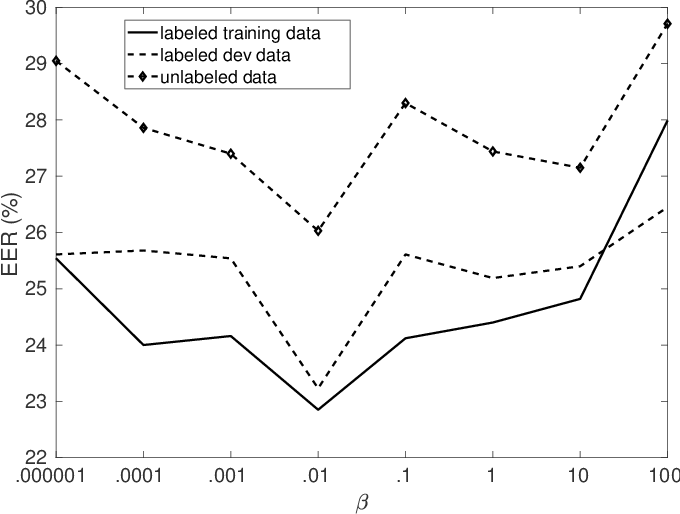 Canonical correlation analysis (CCA) is a statistical learning method that seeks to build view-independent latent representations from multi-view data. This method has been successfully applied to several pattern analysis tasks such as image-to-text mapping and view-invariant object/action recognition. However, this success is highly dependent on the quality of data pairing (i.e., alignments) and mispairing adversely affects the generalization ability of the learned CCA representations. In this paper, we address the issue of alignment errors using a new variant of canonical correlation analysis referred to as alignment-agnostic (AA) CCA. Starting from erroneously paired data taken from different views, this CCA finds transformation matrices by optimizing a constrained maximization problem that mixes a data correlation term with context regularization; the particular design of these two terms mitigates the effect of alignment errors when learning the CCA transformations. Experiments conducted on multi-view tasks, including multi-temporal satellite image change detection, show that our AA CCA method is highly effective and resilient to mispairing errors.

As more aspects of social interaction are digitally recorded, there is a growing need to develop privacy-preserving data analysis methods. Social scientists will be more likely to adopt these methods if doing so entails minimal change to their current methodology. Toward that end, we present a general and modular method for privatizing Bayesian inference for Poisson factorization, a broad class of models that contains some of the most widely used models in the social sciences. Our method satisfies local differential privacy, which ensures that no single centralized server need ever store the non-privatized data. To formulate our local-privacy guarantees, we introduce and focus on limited-precision local privacy---the local privacy analog of limited-precision differential privacy (Flood et al., 2013). We present two case studies, one involving social networks and one involving text corpora, that test our method's ability to form the posterior distribution over latent variables under different levels of noise, and demonstrate our method's utility over a na\"{i}ve approach, wherein inference proceeds as usual, treating the privatized data as if it were not privatized.