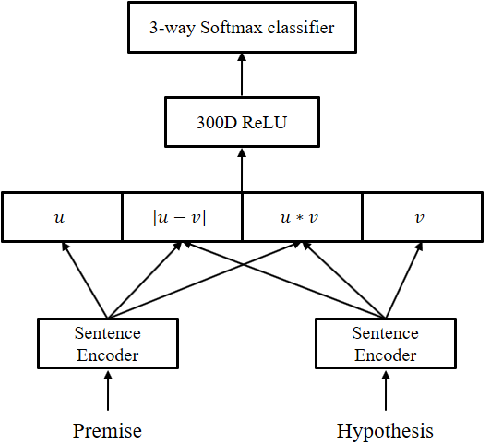 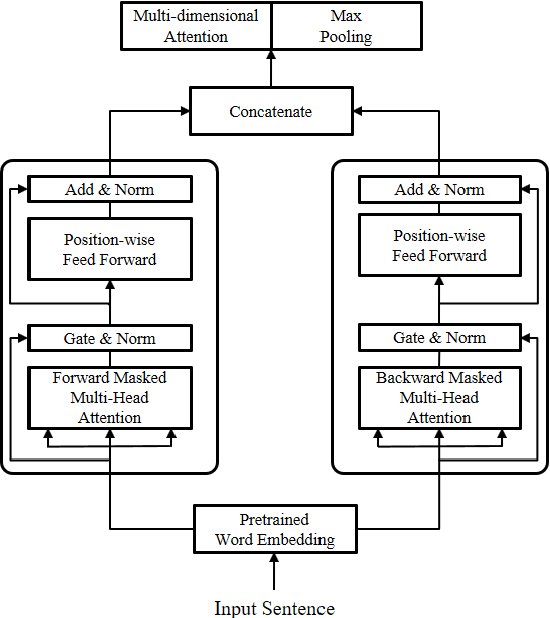 Attention mechanism has been used as an ancillary means to help RNN or CNN. However, the Transformer (Vaswani et al., 2017) recently recorded the state-of-the-art performance in machine translation with a dramatic reduction in training time by solely using attention. Motivated by the Transformer, Directional Self Attention Network (Shen et al., 2017), a fully attention-based sentence encoder, was proposed. It showed good performance with various data by using forward and backward directional information in a sentence. But in their study, not considered at all was the distance between words, an important feature when learning the local dependency to help understand the context of input text. We propose Distance-based Self-Attention Network, which considers the word distance by using a simple distance mask in order to model the local dependency without losing the ability of modeling global dependency which attention has inherent. Our model shows good performance with NLI data, and it records the new state-of-the-art result with SNLI data. Additionally, we show that our model has a strength in long sentences or documents. 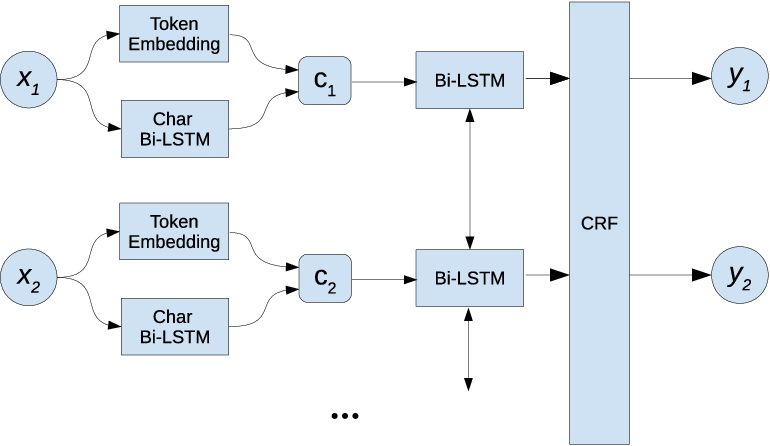 Named Entity Recognition (NER) is one of the most common tasks of the natural language processing. The purpose of NER is to find and classify tokens in text documents into predefined categories called tags, such as person names, quantity expressions, percentage expressions, names of locations, organizations, as well as expression of time, currency and others. Although there is a number of approaches have been proposed for this task in Russian language, it still has a substantial potential for the better solutions. In this work, we studied several deep neural network models starting from vanilla Bi-directional Long Short-Term Memory (Bi-LSTM) then supplementing it with Conditional Random Fields (CRF) as well as highway networks and finally adding external word embeddings. All models were evaluated across three datasets: Gareev's dataset, Person-1000, FactRuEval-2016. We found that extension of Bi-LSTM model with CRF significantly increased the quality of predictions. Encoding input tokens with external word embeddings reduced training time and allowed to achieve state of the art for the Russian NER task. 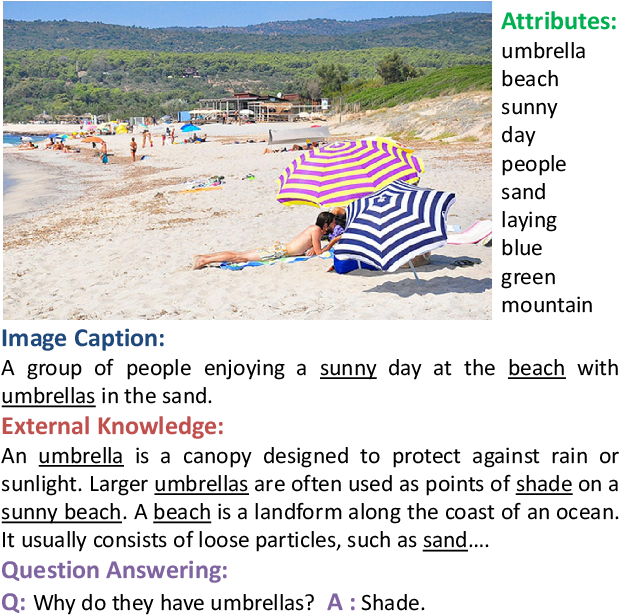 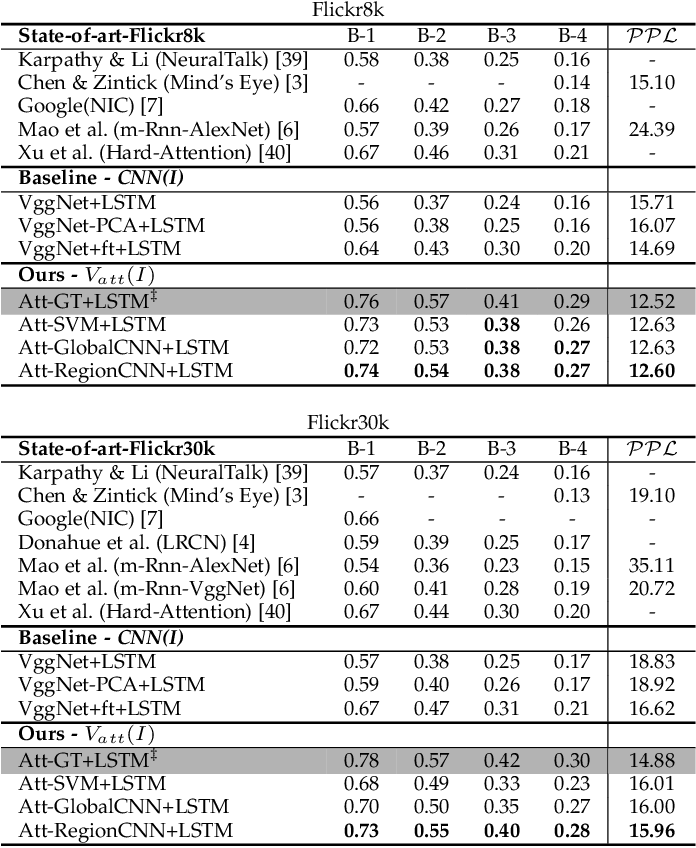 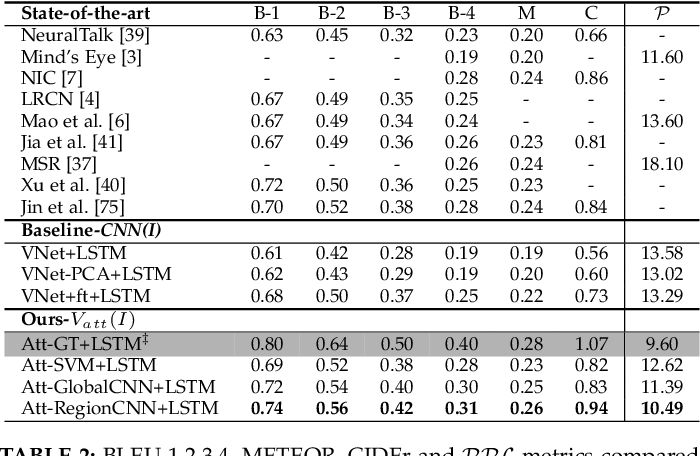 Much recent progress in Vision-to-Language problems has been achieved through a combination of Convolutional Neural Networks (CNNs) and Recurrent Neural Networks (RNNs). This approach does not explicitly represent high-level semantic concepts, but rather seeks to progress directly from image features to text. In this paper we first propose a method of incorporating high-level concepts into the successful CNN-RNN approach, and show that it achieves a significant improvement on the state-of-the-art in both image captioning and visual question answering. We further show that the same mechanism can be used to incorporate external knowledge, which is critically important for answering high level visual questions. Specifically, we design a visual question answering model that combines an internal representation of the content of an image with information extracted from a general knowledge base to answer a broad range of image-based questions. It particularly allows questions to be asked about the contents of an image, even when the image itself does not contain a complete answer. Our final model achieves the best reported results on both image captioning and visual question answering on several benchmark datasets. 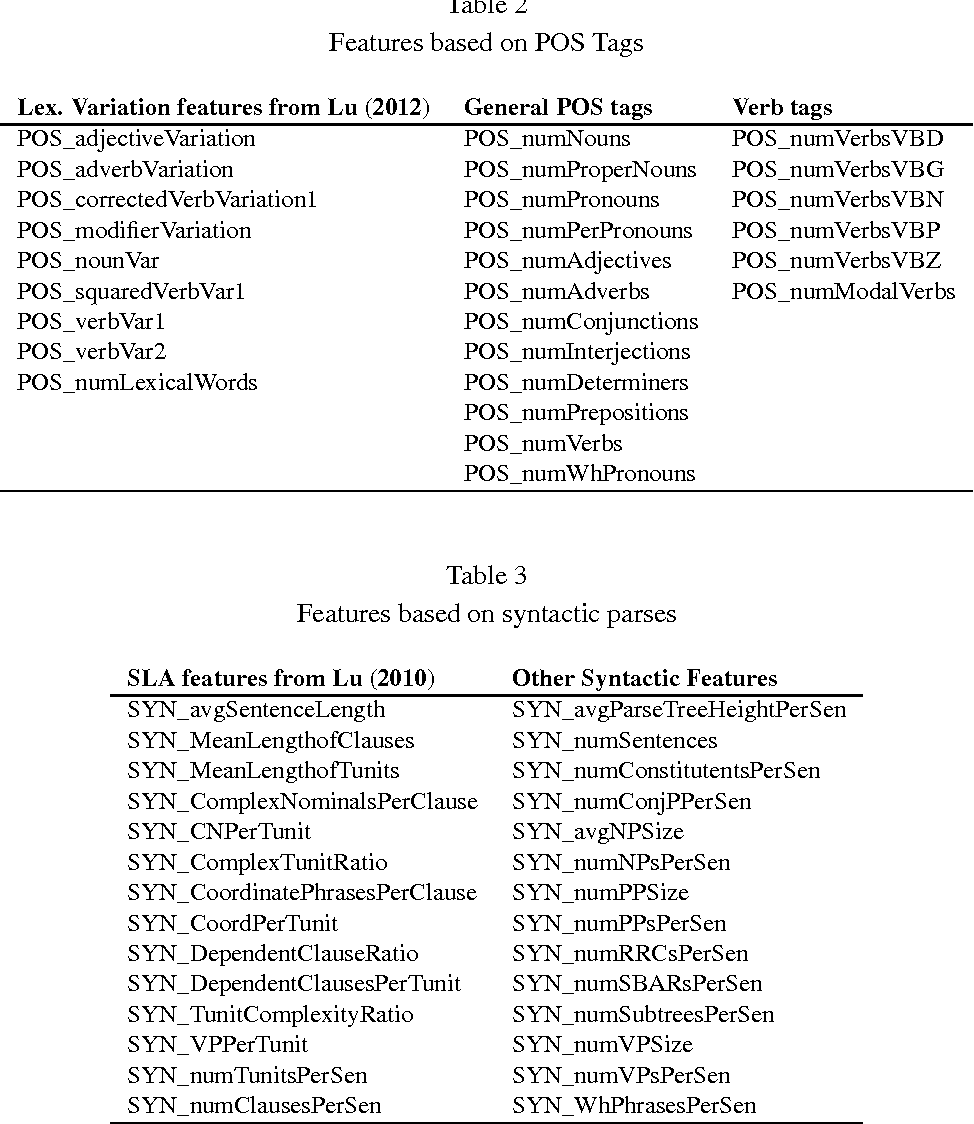 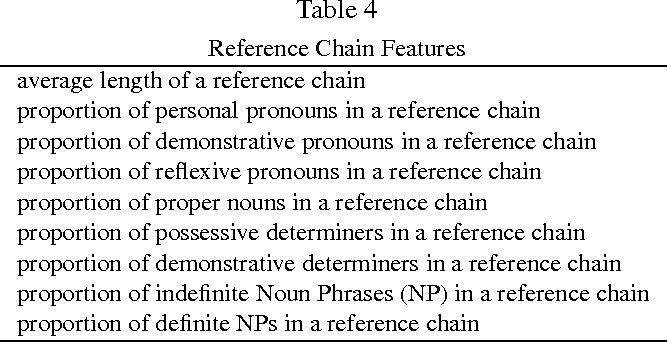 Automatic essay scoring (AES) refers to the process of scoring free text responses to given prompts, considering human grader scores as the gold standard. Writing such essays is an essential component of many language and aptitude exams. Hence, AES became an active and established area of research, and there are many proprietary systems used in real life applications today. However, not much is known about which specific linguistic features are useful for prediction and how much of this is consistent across datasets. This article addresses that by exploring the role of various linguistic features in automatic essay scoring using two publicly available datasets of non-native English essays written in test taking scenarios. The linguistic properties are modeled by encoding lexical, syntactic, discourse and error types of learner language in the feature set. Predictive models are then developed using these features on both datasets and the most predictive features are compared. While the results show that the feature set used results in good predictive models with both datasets, the question "what are the most predictive features?" has a different answer for each dataset.


* Article accepted for publication at: International Journal of Artificial Intelligence in Education (IJAIED). To appear in early 2017 (journal url: http://www.springer.com/computer/ai/journal/40593) 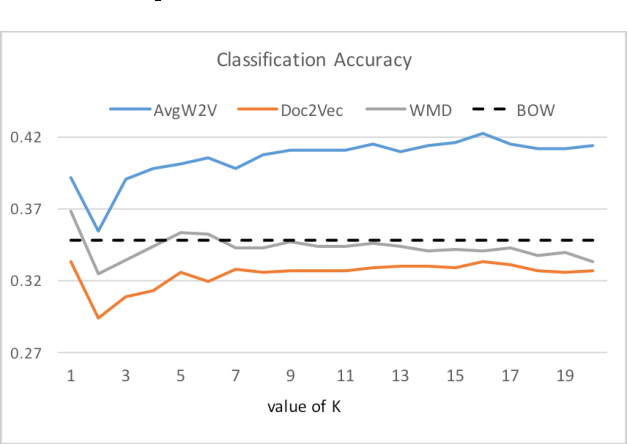 Automatic and accurate classification of items enables numerous downstream applications in many domains. These applications can range from faceted browsing of items to product recommendations and big data analytics. In the online recruitment domain, we refer to classifying job ads to pre-defined or custom occupation categories as job title classification. A large-scale job title classification system can power various downstream applications such as semantic search, job recommendations and labor market analytics. In this paper, we discuss experiments conducted to improve our in-house job title classification system. The classification component of the system is composed of a two-stage coarse and fine level classifier cascade that classifies input text such as job title and/or job ads to one of the thousands of job titles in our taxonomy. To improve classification accuracy and effectiveness, we experiment with various semantic representation strategies such as average W2V vectors and document similarity measures such as Word Movers Distance (WMD). Our initial results show an overall improvement in accuracy of Carotene[1].

Named entity recognition is a challenging task that has traditionally required large amounts of knowledge in the form of feature engineering and lexicons to achieve high performance. In this paper, we present a novel neural network architecture that automatically detects word- and character-level features using a hybrid bidirectional LSTM and CNN architecture, eliminating the need for most feature engineering. We also propose a novel method of encoding partial lexicon matches in neural networks and compare it to existing approaches. Extensive evaluation shows that, given only tokenized text and publicly available word embeddings, our system is competitive on the CoNLL-2003 dataset and surpasses the previously reported state of the art performance on the OntoNotes 5.0 dataset by 2.13 F1 points. By using two lexicons constructed from publicly-available sources, we establish new state of the art performance with an F1 score of 91.62 on CoNLL-2003 and 86.28 on OntoNotes, surpassing systems that employ heavy feature engineering, proprietary lexicons, and rich entity linking information.


* To appear in Transactions of the Association for Computational Linguistics 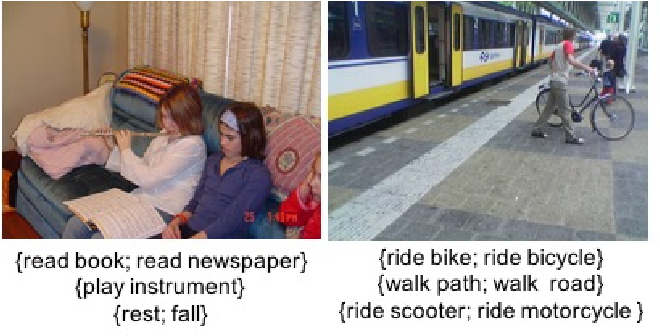 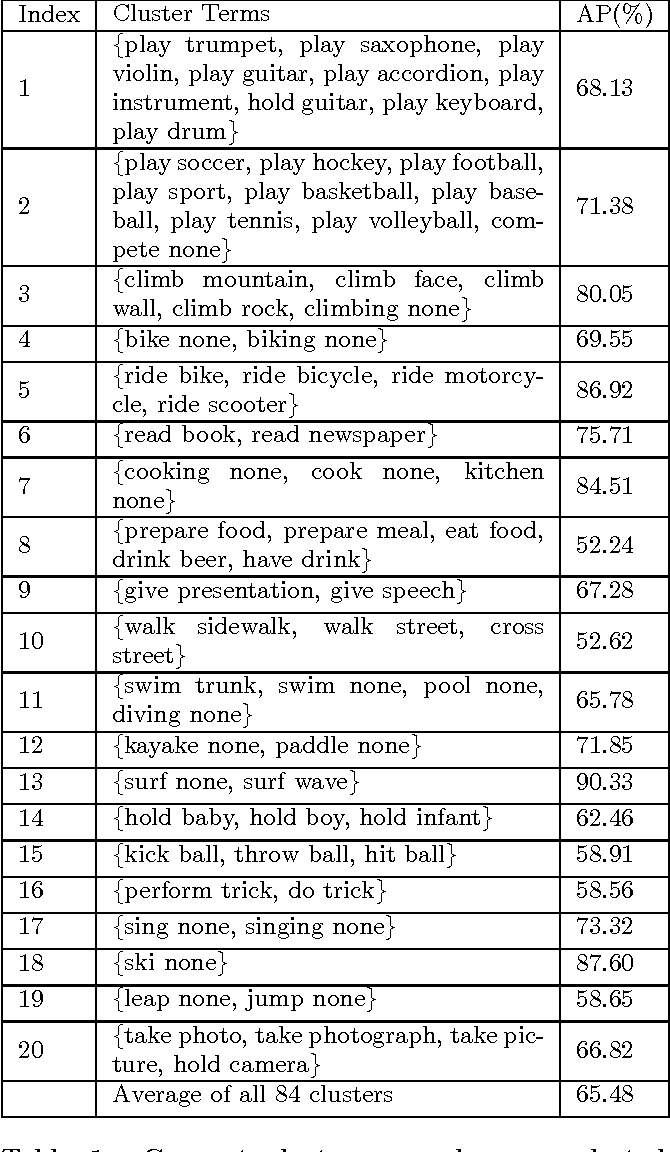 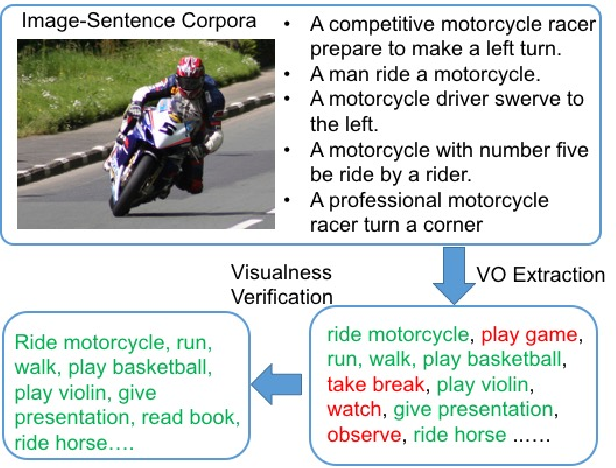 Action classification in still images is an important task in computer vision. It is challenging as the appearances of ac- tions may vary depending on their context (e.g. associated objects). Manually labeling of context information would be time consuming and difficult to scale up. To address this challenge, we propose a method to automatically discover and cluster action concepts, and learn their classifiers from weakly supervised image-sentence corpora. It obtains candidate action concepts by extracting verb-object pairs from sentences and verifies their visualness with the associated images. Candidate action concepts are then clustered by using a multi-modal representation with image embeddings from deep convolutional networks and text embeddings from word2vec. More than one hundred human action concept classifiers are learned from the Flickr 30k dataset with no additional human effort and promising classification results are obtained. We further apply the AdaBoost algorithm to automatically select and combine relevant action concepts given an action query. Promising results have been shown on the PASCAL VOC 2012 action classification benchmark, which has zero overlap with Flickr30k. 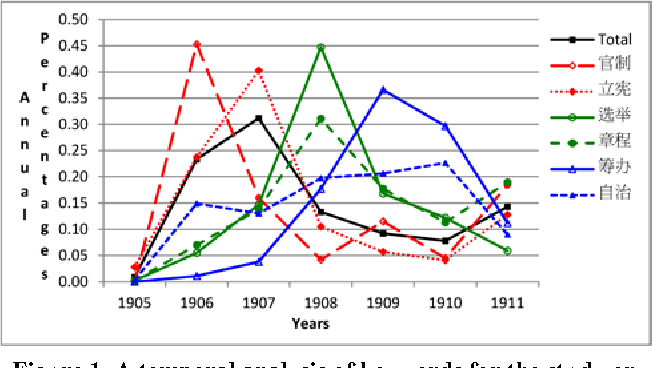 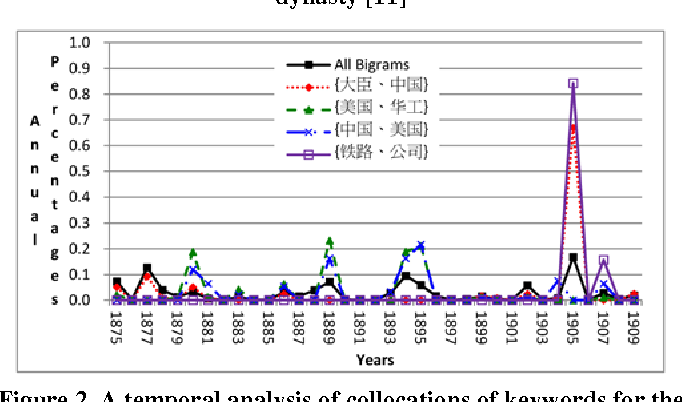 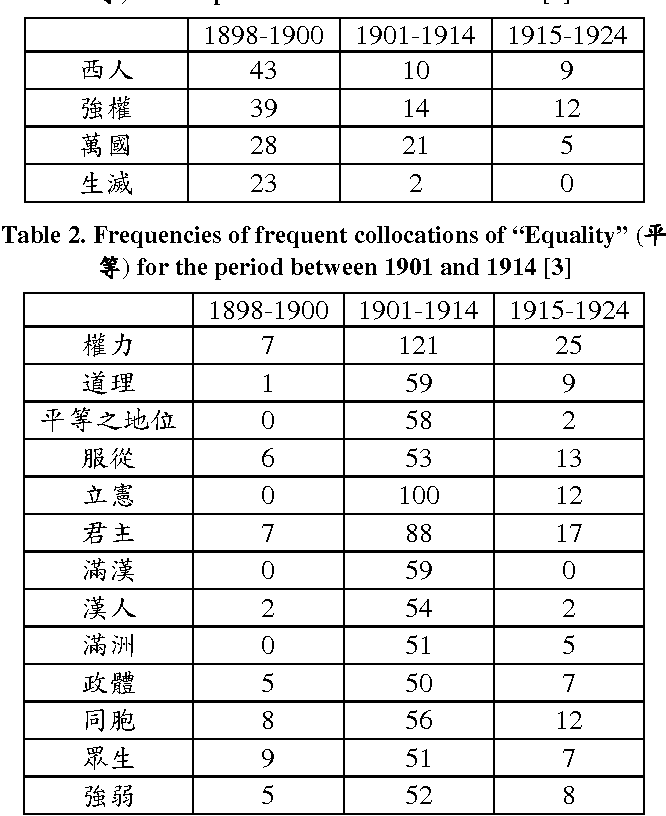 We analyzed historical and literary documents in Chinese to gain insights into research issues, and overview our studies which utilized four different sources of text materials in this paper. We investigated the history of concepts and transliterated words in China with the Database for the Study of Modern China Thought and Literature, which contains historical documents about China between 1830 and 1930. We also attempted to disambiguate names that were shared by multiple government officers who served between 618 and 1912 and were recorded in Chinese local gazetteers. To showcase the potentials and challenges of computer-assisted analysis of Chinese literatures, we explored some interesting yet non-trivial questions about two of the Four Great Classical Novels of China: (1) Which monsters attempted to consume the Buddhist monk Xuanzang in the Journey to the West (JTTW), which was published in the 16th century, (2) Which was the most powerful monster in JTTW, and (3) Which major role smiled the most in the Dream of the Red Chamber, which was published in the 18th century. Similar approaches can be applied to the analysis and study of modern documents, such as the newspaper articles published about the 228 incident that occurred in 1947 in Taiwan. 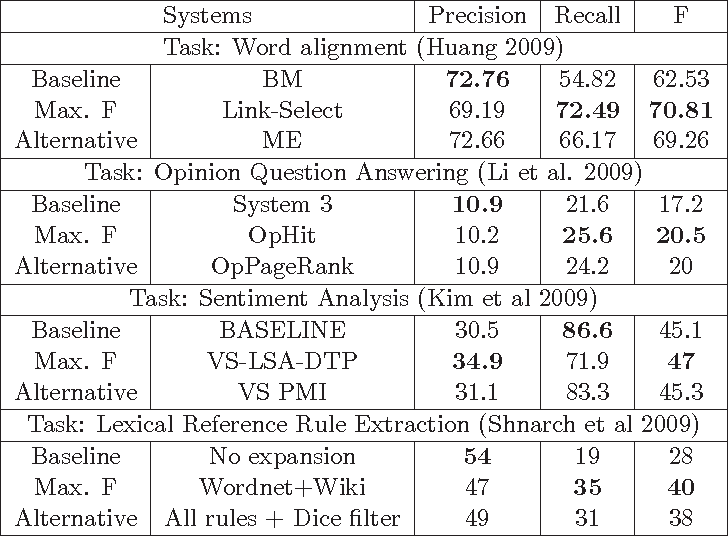 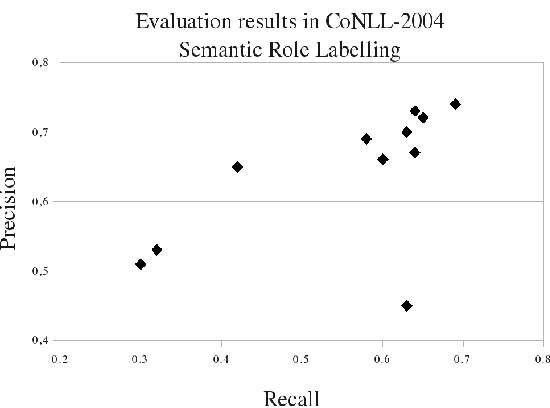 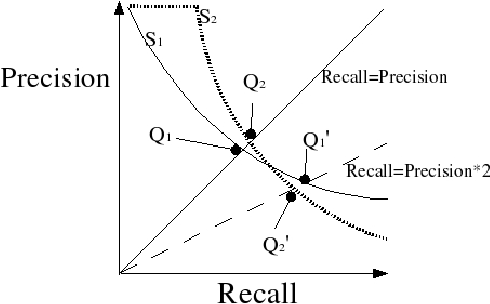 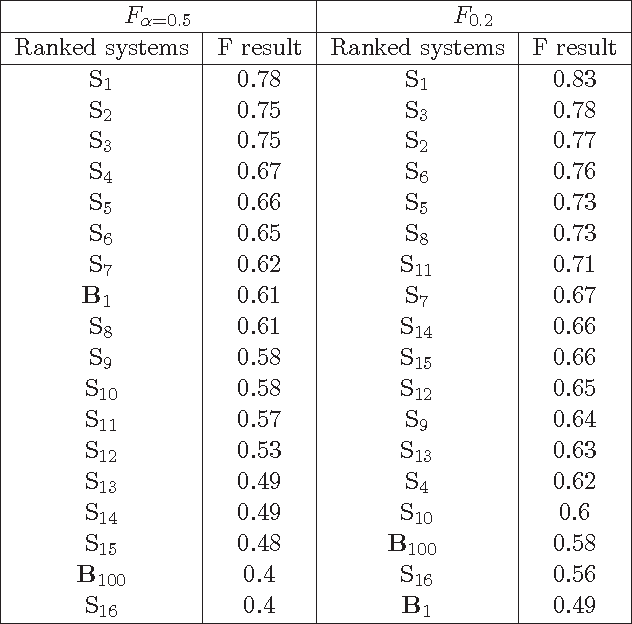 Many Artificial Intelligence tasks cannot be evaluated with a single quality criterion and some sort of weighted combination is needed to provide system rankings. A problem of weighted combination measures is that slight changes in the relative weights may produce substantial changes in the system rankings. This paper introduces the Unanimous Improvement Ratio (UIR), a measure that complements standard metric combination criteria (such as van Rijsbergen's F-measure) and indicates how robust the measured differences are to changes in the relative weights of the individual metrics. UIR is meant to elucidate whether a perceived difference between two systems is an artifact of how individual metrics are weighted. Besides discussing the theoretical foundations of UIR, this paper presents empirical results that confirm the validity and usefulness of the metric for the Text Clustering problem, where there is a tradeoff between precision and recall based metrics and results are particularly sensitive to the weighting scheme used to combine them. Remarkably, our experiments show that UIR can be used as a predictor of how well differences between systems measured on a given test bed will also hold in a different test bed.