Relation extraction (RE) consists in categorizing the relationship between entities in a sentence. A recent paradigm to develop relation extractors is Distant Supervision (DS), which allows the automatic creation of new datasets by taking an alignment between a text corpus and a Knowledge Base (KB). KBs can sometimes also provide additional information to the RE task. One of the methods that adopt this strategy is the RESIDE model, which proposes a distantly-supervised neural relation extraction using side information from KBs. Considering that this method outperformed state-of-the-art baselines, in this paper, we propose a related approach to RESIDE also using additional side information, but simplifying the sentence encoding with BERT embeddings. Through experiments, we show the effectiveness of the proposed method in Google Distant Supervision and Riedel datasets concerning the BGWA and RESIDE baseline methods. Although Area Under the Curve is decreased because of unbalanced datasets, [email protected] results have shown that the use of BERT as sentence encoding allows superior performance to baseline methods.

Who Wins the Game of Thrones? How Sentiments Improve the Prediction of Candidate Choice 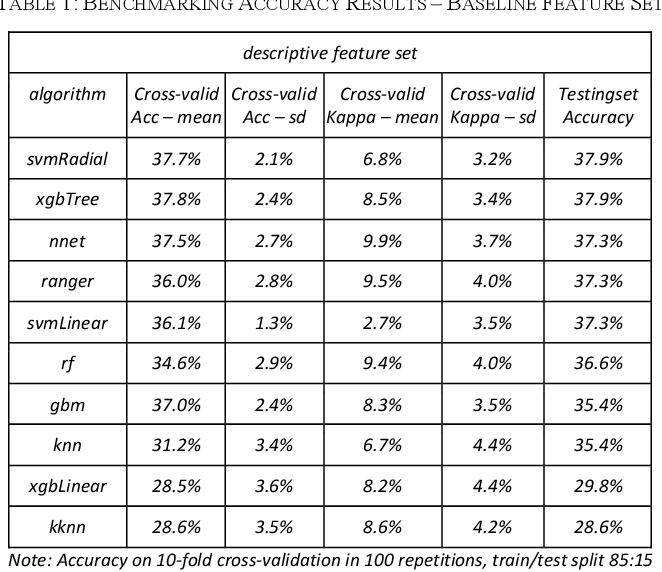 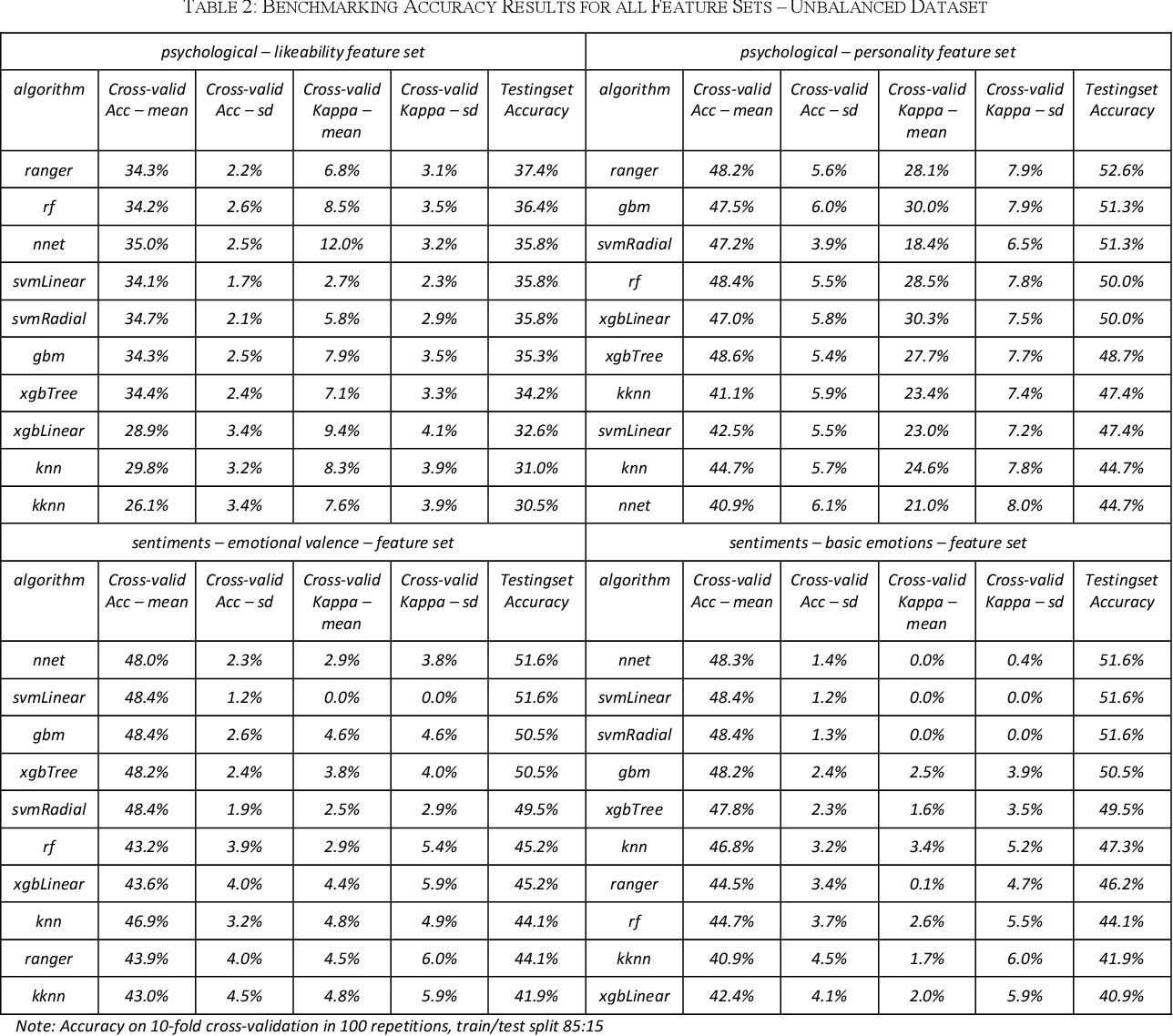 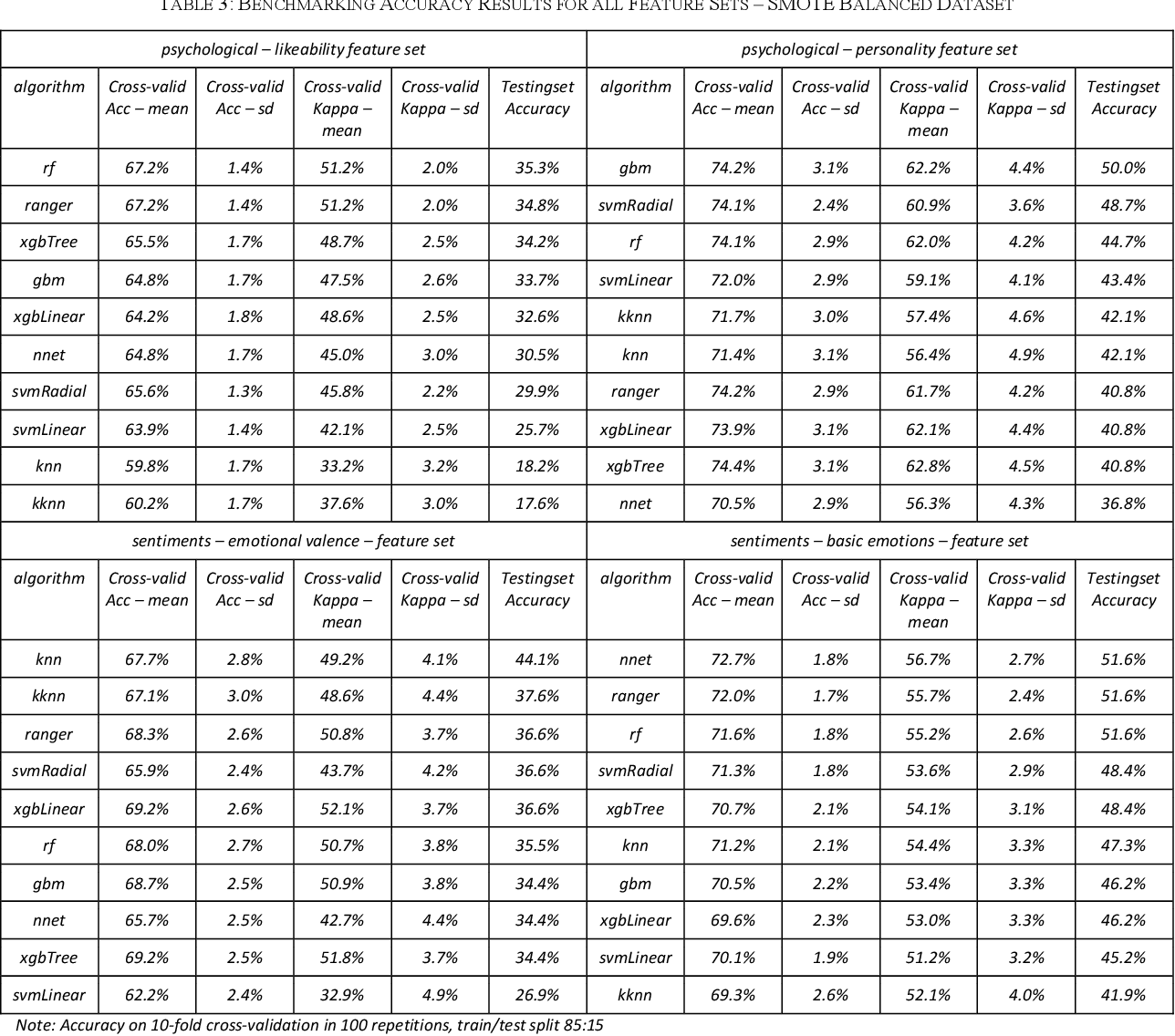 This paper analyzes how candidate choice prediction improves by different psychological predictors. To investigate this question, it collected an original survey dataset featuring the popular TV series "Game of Thrones". The respondents answered which character they anticipated to win in the final episode of the series, and explained their choice of the final candidate in free text from which sentiments were extracted. These sentiments were compared to feature sets derived from candidate likeability and candidate personality ratings. In our benchmarking of 10-fold cross-validation in 100 repetitions, all feature sets except the likeability ratings yielded a 10-11% improvement in accuracy on the holdout set over the base model. Treating the class imbalance with synthetic minority oversampling (SMOTE) increased holdout set performance by 20-34% but surprisingly not testing set performance. Taken together, our study provides a quantified estimation of the additional predictive value of psychological predictors. Likeability ratings were clearly outperformed by the feature sets based on personality, emotional valence, and basic emotions.


* To be published in IEEE conference proceedings: International Conference on Artificial Intelligence in Information and Communication, ICAIIC 2020 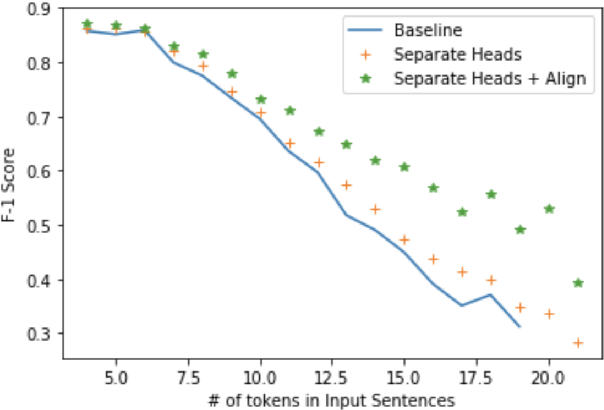 Semantic parsing is the task of obtaining machine-interpretable representations from natural language text. We consider one such formal representation - First-Order Logic (FOL) and explore the capability of neural models in parsing English sentences to FOL. We model FOL parsing as a sequence to sequence mapping task where given a natural language sentence, it is encoded into an intermediate representation using an LSTM followed by a decoder which sequentially generates the predicates in the corresponding FOL formula. We improve the standard encoder-decoder model by introducing a variable alignment mechanism that enables it to align variables across predicates in the predicted FOL. We further show the effectiveness of predicting the category of FOL entity - Unary, Binary, Variables and Scoped Entities, at each decoder step as an auxiliary task on improving the consistency of generated FOL. We perform rigorous evaluations and extensive ablations. We also aim to release our code as well as large scale FOL dataset along with models to aid further research in logic-based parsing and inference in NLP.

Unsupervised Separation of Native and Loanwords for Malayalam and Telugu 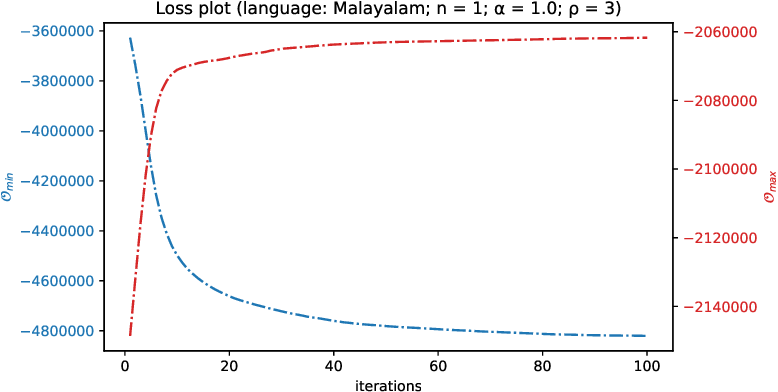 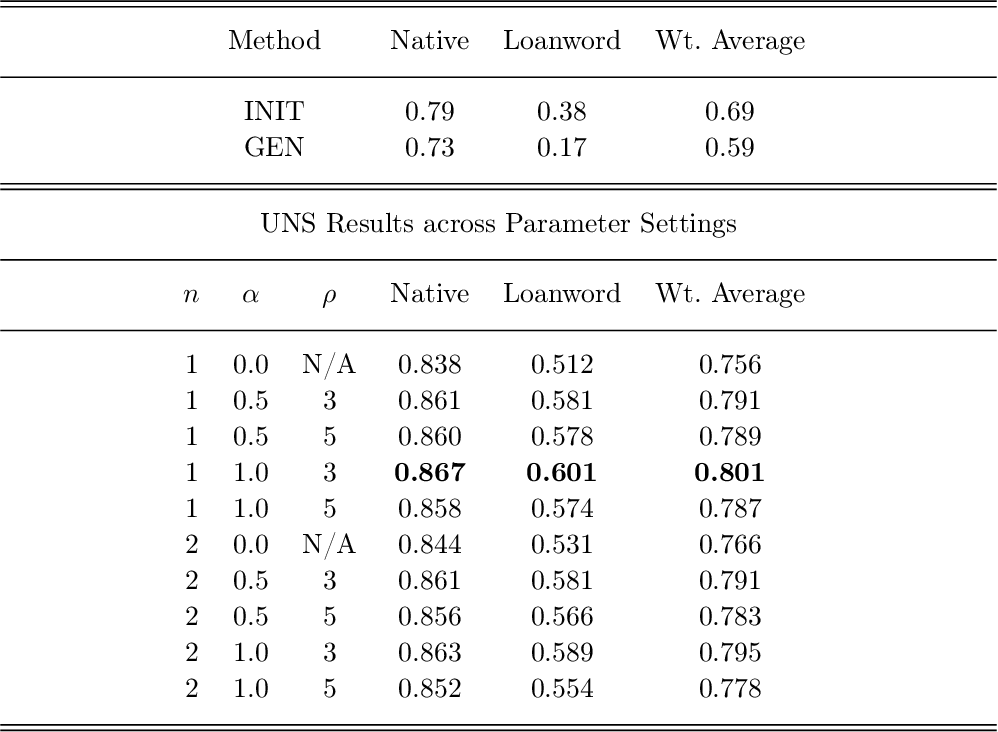 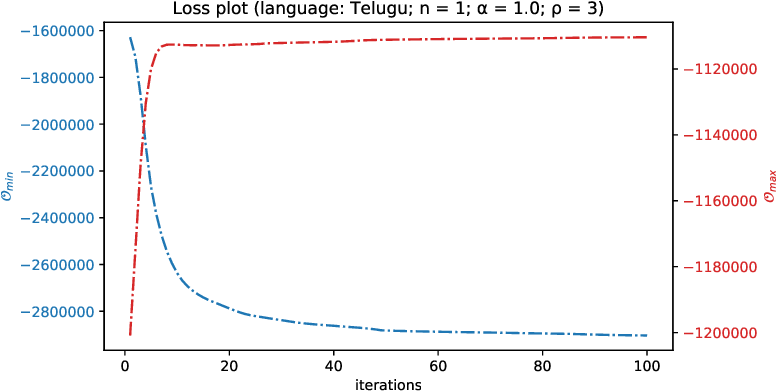 Quite often, words from one language are adopted within a different language without translation; these words appear in transliterated form in text written in the latter language. This phenomenon is particularly widespread within Indian languages where many words are loaned from English. In this paper, we address the task of identifying loanwords automatically and in an unsupervised manner, from large datasets of words from agglutinative Dravidian languages. We target two specific languages from the Dravidian family, viz., Malayalam and Telugu. Based on familiarity with the languages, we outline an observation that native words in both these languages tend to be characterized by a much more versatile stem - stem being a shorthand to denote the subword sequence formed by the first few characters of the word - than words that are loaned from other languages. We harness this observation to build an objective function and an iterative optimization formulation to optimize for it, yielding a scoring of each word's nativeness in the process. Through an extensive empirical analysis over real-world datasets from both Malayalam and Telugu, we illustrate the effectiveness of our method in quantifying nativeness effectively over available baselines for the task. 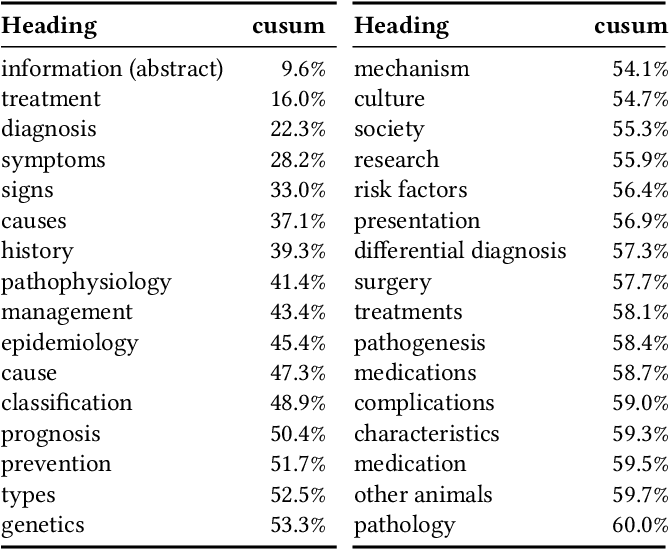 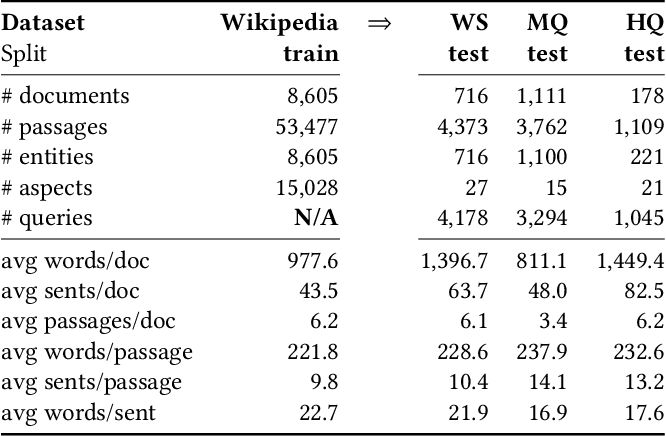 We present Contextual Discourse Vectors (CDV), a distributed document representation for efficient answer retrieval from long healthcare documents. Our approach is based on structured query tuples of entities and aspects from free text and medical taxonomies. Our model leverages a dual encoder architecture with hierarchical LSTM layers and multi-task training to encode the position of clinical entities and aspects alongside the document discourse. We use our continuous representations to resolve queries with short latency using approximate nearest neighbor search on sentence level. We apply the CDV model for retrieving coherent answer passages from nine English public health resources from the Web, addressing both patients and medical professionals. Because there is no end-to-end training data available for all application scenarios, we train our model with self-supervised data from Wikipedia. We show that our generalized model significantly outperforms several state-of-the-art baselines for healthcare passage ranking and is able to adapt to heterogeneous domains without additional fine-tuning. 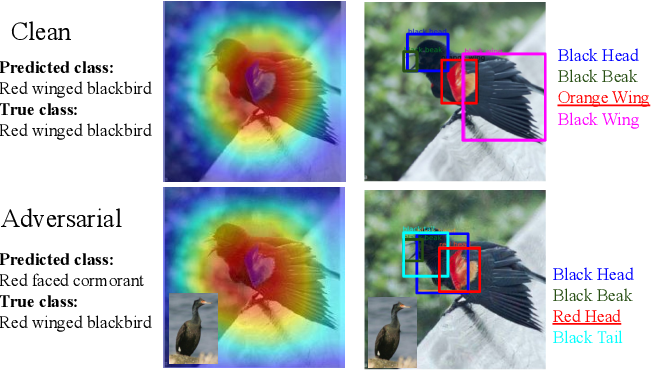 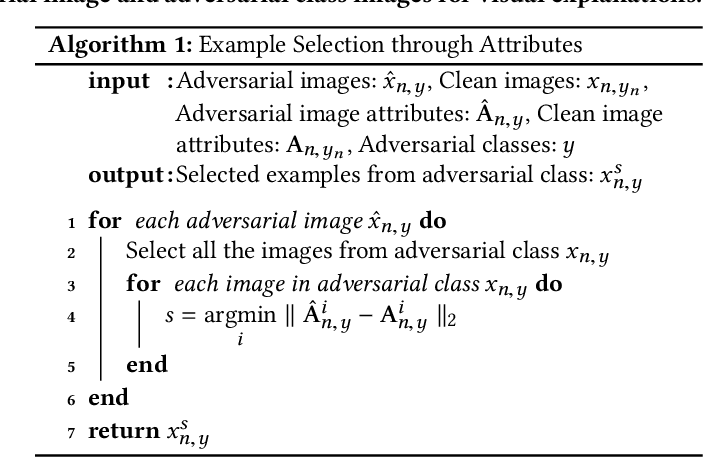 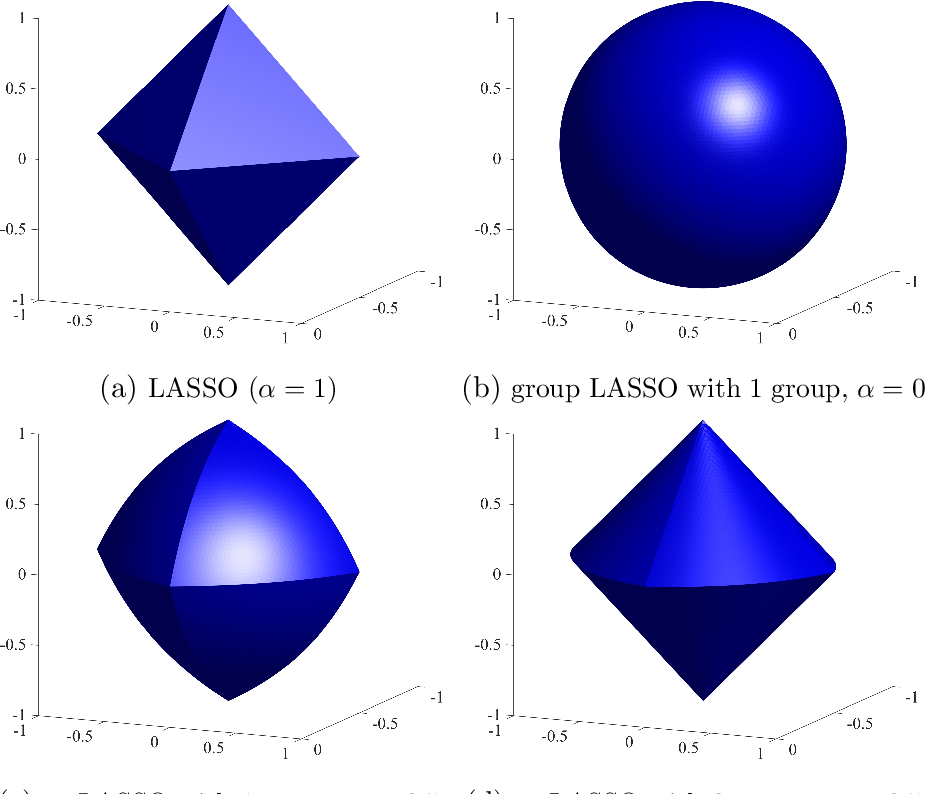 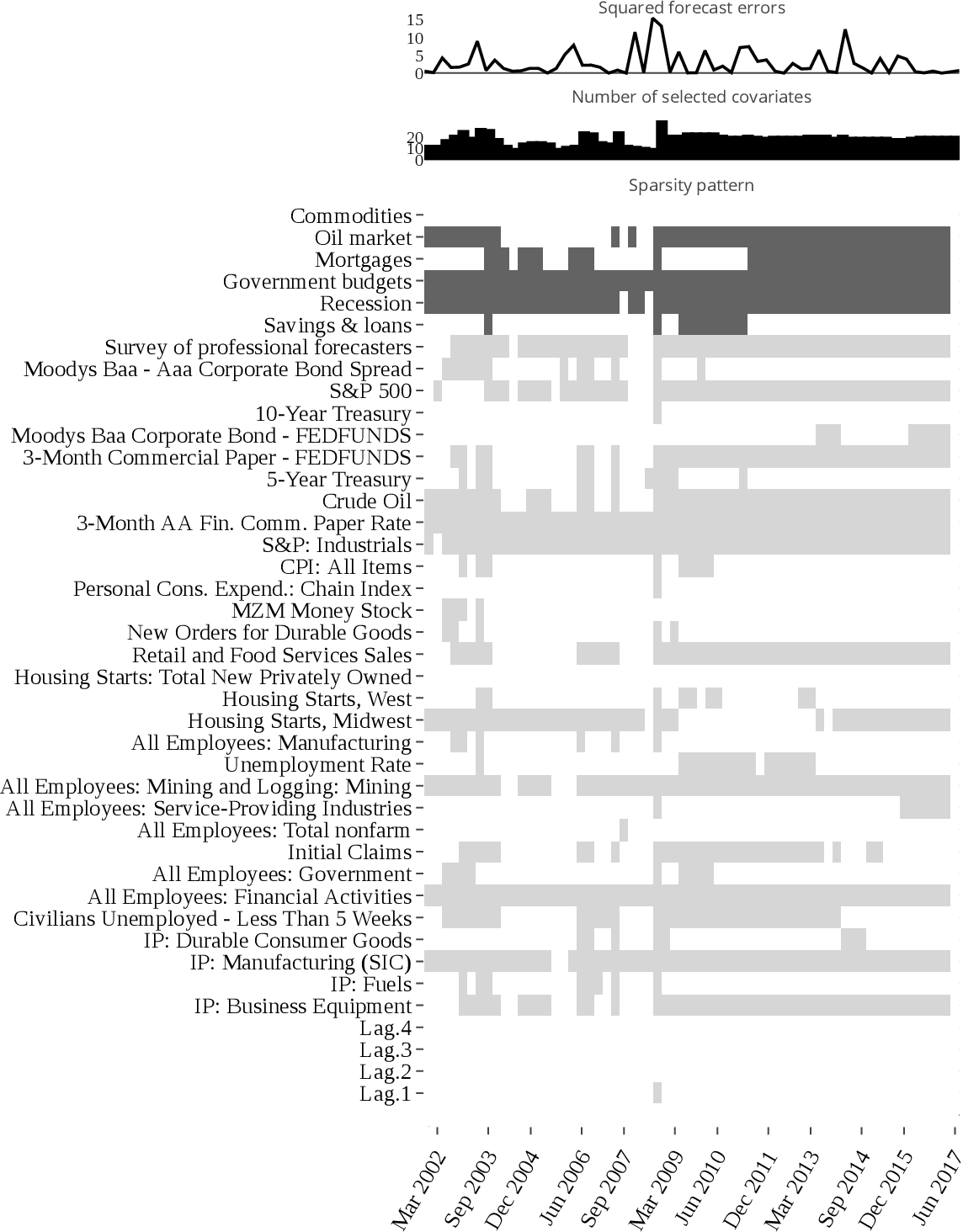 Time series regression analysis in econometrics typically involves a framework relying on a set of mixing conditions to establish consistency and asymptotic normality of parameter estimates and HAC-type estimators of the residual long-run variances to conduct proper inference. This article introduces structured machine learning regressions for high-dimensional time series data using the aforementioned commonly used setting. To recognize the time series data structures we rely on the sparse-group LASSO estimator. We derive a new Fuk-Nagaev inequality for a class of $\tau$-dependent processes with heavier than Gaussian tails, nesting $\alpha$-mixing processes as a special case, and establish estimation, prediction, and inferential properties, including convergence rates of the HAC estimator for the long-run variance based on LASSO residuals. An empirical application to nowcasting US GDP growth indicates that the estimator performs favorably compared to other alternatives and that the text data can be a useful addition to more traditional numerical data.

Let Me Know What to Ask: Interrogative-Word-Aware Question Generation 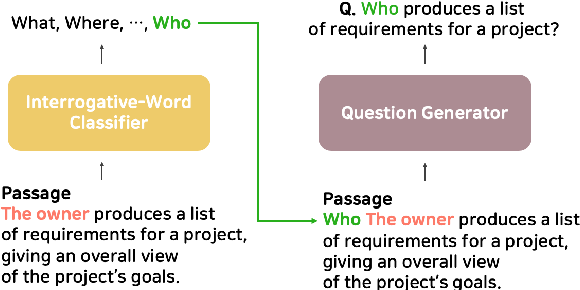 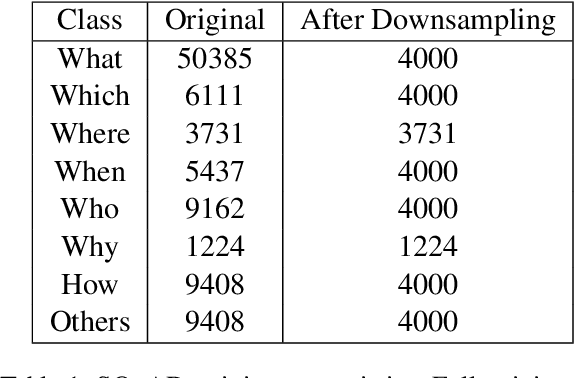 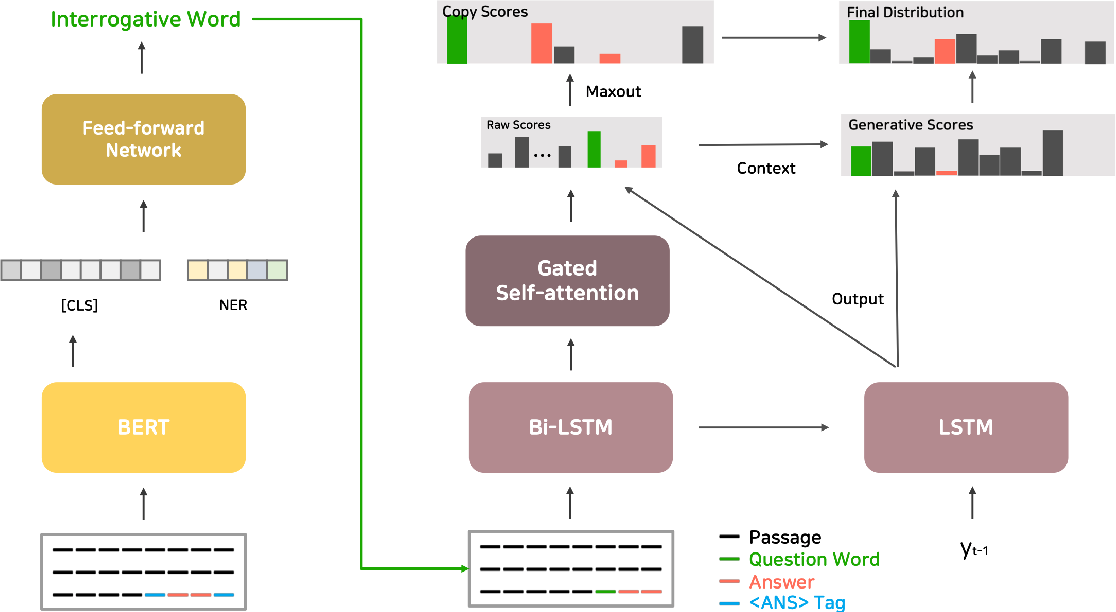 Question Generation (QG) is a Natural Language Processing (NLP) task that aids advances in Question Answering (QA) and conversational assistants. Existing models focus on generating a question based on a text and possibly the answer to the generated question. They need to determine the type of interrogative word to be generated while having to pay attention to the grammar and vocabulary of the question. In this work, we propose Interrogative-Word-Aware Question Generation (IWAQG), a pipelined system composed of two modules: an interrogative word classifier and a QG model. The first module predicts the interrogative word that is provided to the second module to create the question. Owing to an increased recall of deciding the interrogative words to be used for the generated questions, the proposed model achieves new state-of-the-art results on the task of QG in SQuAD, improving from 46.58 to 47.69 in BLEU-1, 17.55 to 18.53 in BLEU-4, 21.24 to 22.33 in METEOR, and from 44.53 to 46.94 in ROUGE-L. 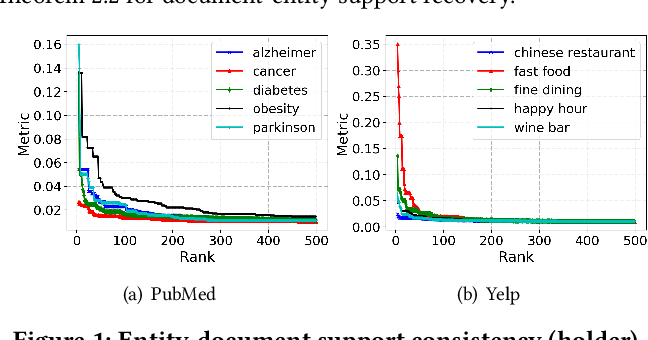 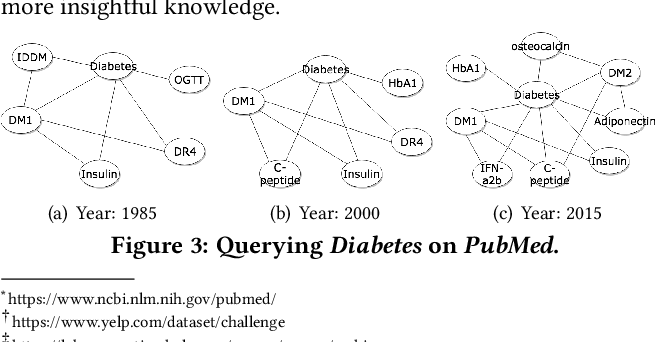 Given a query, unlike traditional IR that finds relevant documents or entities, in this work, we focus on retrieving both entities and their connections for insightful knowledge summarization. For example, given a query "computer vision" on a CS literature corpus, rather than returning a list of relevant entities like "cnn", "imagenet" and "svm", we are interested in the connections among them, and furthermore, the evolution patterns of such connections along particular ordinal dimensions such as time. Particularly, we hope to provide structural knowledge relevant to the query, such as "svm" is related to "imagenet" but not "cnn". Moreover, we aim to model the changing trends of the connections, such as "cnn" becomes highly related to "imagenet" after 2010, which enables the tracking of knowledge evolutions. In this work, to facilitate such a novel insightful search system, we propose \textsc{SetEvolve}, which is a unified framework based on nonparanomal graphical models for evolutionary network construction from large text corpora. Systematic experiments on synthetic data and insightful case studies on real-world corpora demonstrate the utility of \textsc{SetEvolve}.

OpenNRE: An Open and Extensible Toolkit for Neural Relation Extraction 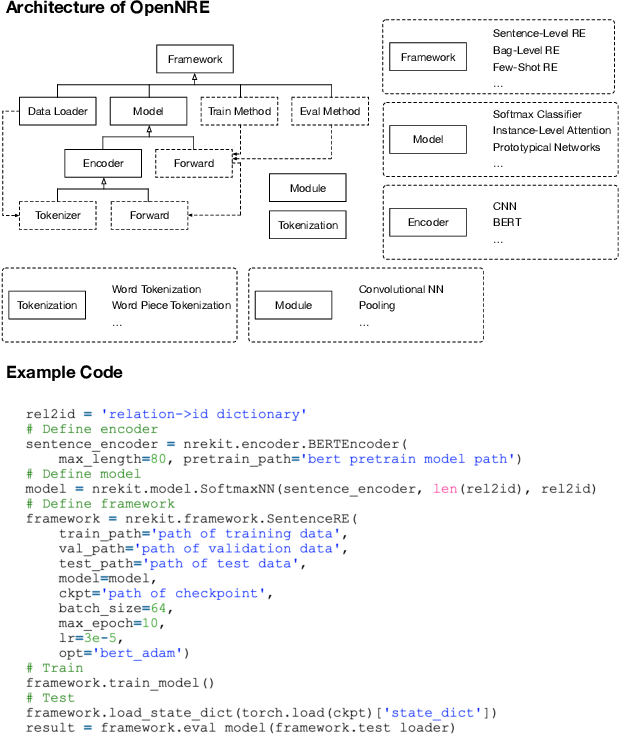 OpenNRE is an open-source and extensible toolkit that provides a unified framework to implement neural models for relation extraction (RE). Specifically, by implementing typical RE methods, OpenNRE not only allows developers to train custom models to extract structured relational facts from the plain text but also supports quick model validation for researchers. Besides, OpenNRE provides various functional RE modules based on both TensorFlow and PyTorch to maintain sufficient modularity and extensibility, making it becomes easy to incorporate new models into the framework. Besides the toolkit, we also release an online system to meet real-time extraction without any training and deploying. Meanwhile, the online system can extract facts in various scenarios as well as aligning the extracted facts to Wikidata, which may benefit various downstream knowledge-driven applications (e.g., information retrieval and question answering). More details of the toolkit and online system can be obtained from http://github.com/thunlp/OpenNRE.